The Long Way Round: Part Three

Are you finding yourself even more confused than usual? That’s because this is part three of the story. To get yourself all caught up, head on over to part one and part two and tuck in.

Despite the scenery as we sat on the stone bank of that gently flowing stream, we couldn’t help but feel dejected. In our minds, in that moment, our trip was over and we felt like we’d failed by calling for a ride — not to mention the fact that we still had to figure out how the hell we were going to get to Tahoma to meet up with Fleck the next day. 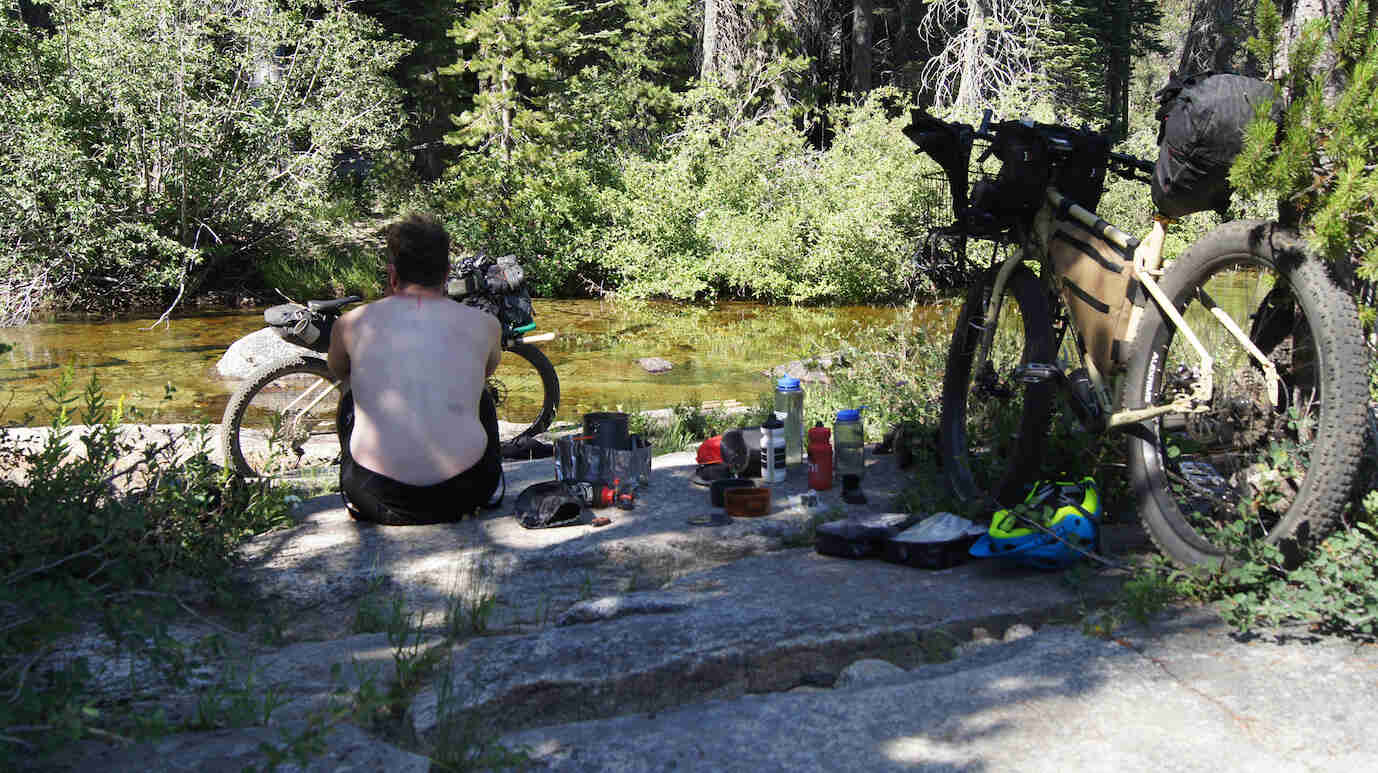 It was about 4:30 in the afternoon by this point and, judging by my map, we still had about four miles before we hit the Loon Lake Campground. We decided our best bet was to make it to the campground before sundown and grab a spot and figure it out from there. We cleaned our lunch dishes, packed up, and crossed the stream. While we were hopeful that the other side would be easier, we’d didn’t have much confidence. Once on the other side, we began riding down the trail. That’s right, RIDING! Had our luck somehow changed?

We made it maybe a quarter mile down the trail before it began to pitch up and we were once again off our bikes and hauling them over everything from dead trees to Cadilac-sized boulders. This continue for another mile or so, enough to eat up another hour of the day. And then… we turned off the trail and onto another jeep road but this one was actually rideable! We were able to ride for about a mile — our longest stretch of riding so far the entire day. We finally felt like we were shittin’ in tall cotton.

But you should be able to guess by now what happens next.

We reached a point where the jeep road continued on around a bend. Unfortunately, this was where our route took us off that road and onto another hike-a-bike trail. The remaining two-ish miles were pure bushwacking without an inch of riding. This ate up another two hours rather quickly and before we knew it, the sun was fading and we still hadn’t reached Loon Lake.

Suddenly we heard a sound that I typically try to avoid in my normal life but, given the circumstances, put a large, idiot-like smile on my face: the sound of children. That meant one thing. We were close. Finally.

As with the previous evening, one moment we were close to our breaking points and the next, we were emerging from the woods into someone’s campsite like something out of a bad horror movie. We asked the first person we saw if he could point us in the direction of the camp host so we could grab a spot for the night. He pointed us in the right direction but warned us that there was a sign out front that said the campground was full. It was a Friday night at around 8:00 in the evening — something we hadn’t even considered.

We made our way through the campground and down to the camp host, noticing on the way how many empty campsites there were, something that raised our spirits slightly. When we arrived at the camp host, however, those spirits plummeted. Both of the camp hosts were anything but helpful and essentially told us to go camp on the side of the road for all they cared, they didn’t want us there. In short, they were gigantic assholes.

After arguing with them for a bit, they finally agreed to let us rinse off in the lake before heading back into their trailers to continue watching Two and a Half Men reruns or whatever else bullshit garbage brought them mild amounts of joy. As we were at the lake, we discussed our options and decided to take another loop through the campground to look at all those empty campsites again. If we could find one with a reservation date that was a couple days old, it was safe to say those people probably weren’t going to show up and their site free for the poaching.

As we were circling around, we ran into our friend who had given us directions earlier. He asked if we’d had any luck and we explained the situation to him. He happened to be chatting with a few buddies and one of them spoke up.

“Hell, if you just need a place to set up a couple tents, I have plenty of space in my site. It’s just my son and I and we only have one tent.”

Holy shit. We’d just hit the stranger jackpot. We followed our new savior (who’s real name is Eric) back to his campsite, chatting along the way. He was a hiker, he was a mountain biker, and he was sympathetic to our situation. He was our goddamn hero in that moment.

We got to his campsite and began setting up. While we did, Eric shared some food, beer, and whiskey with us. He also told us that once we got all situated, we should join him and his friends around the campfire a few sites down —a suggestion we were more than happy to take. 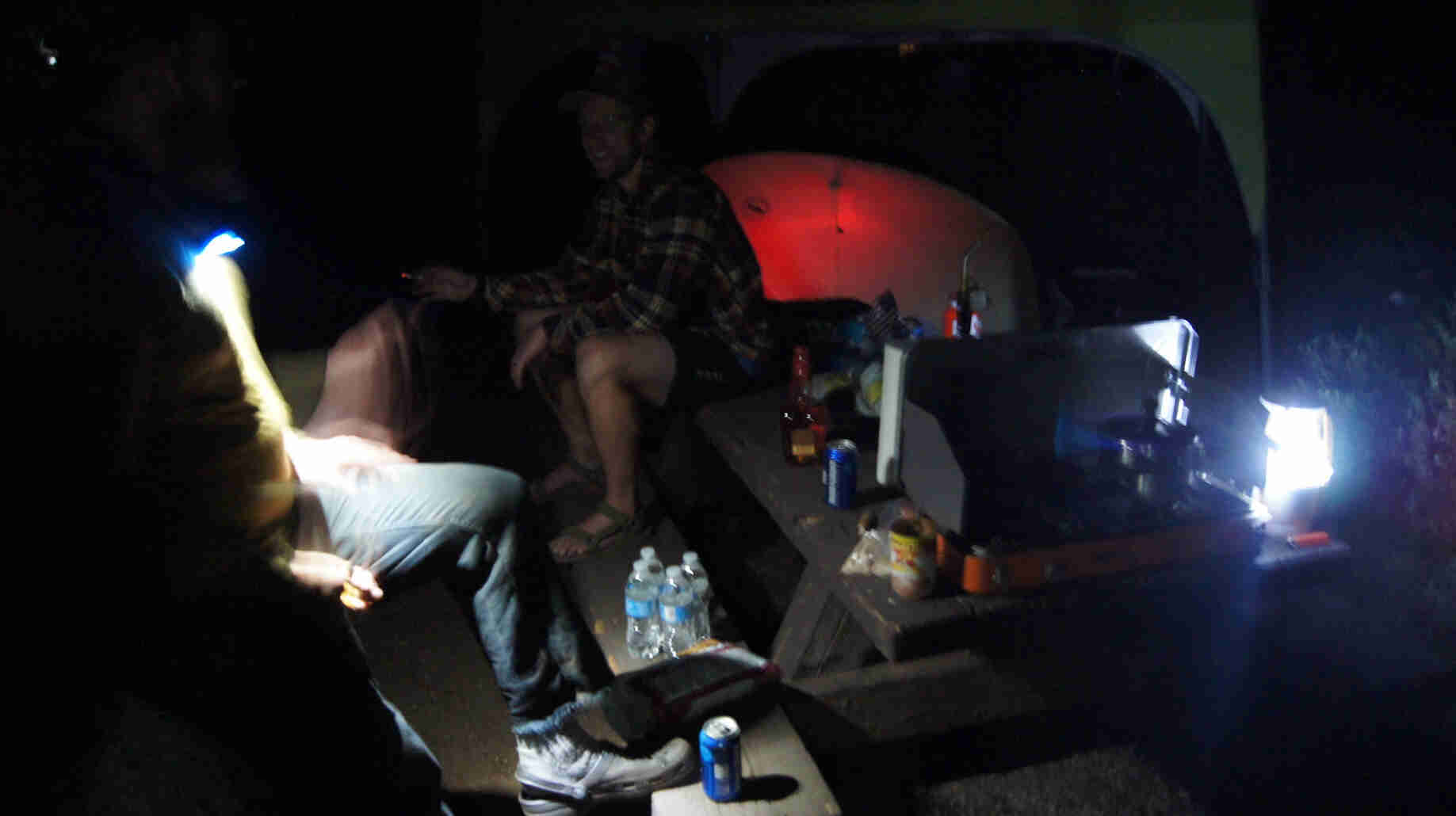 Around the fire, we began chatting with Sean — one of Eric’s friends and another fellow mountain biker. When Sean asked us where we were headed from Loon Lake and we told him, he informed us that we’d have another 17 or so miles of the same type of bullshit we’d dealt with that day. We immediately asked for advice on other options. Essentially, we had one: ride pavement (including a busy highway with a gnarly climb) back to South Lake Tahoe where we’d been two days prior and then ride the road along the lake from there to Tahoma. While were discussing this option, Sean’s wife Becky offered to drive us the hour and half to South Lake Tahoe.

I’ve never agreed to something so fast.

So, there were. Sitting around a fire with new friends, enjoying some delicious Coors Banquet, and struggling to believe how our luck had changed — not just that night but the whole trip. Throughout this entire journey, we’d encountered and benefited from the kindness of so many good people. Becky offering to give us a ride was the latest but we truly couldn’t have made it this far without the friendly advice of our mountain bike friends, Hippy and Squirrel, our neighbor at Wrights Lake that gave us some beers, and our hiking pals that shared their ice water with us. I mean, we probably (maybe?) would’ve made it eventually but the kindness of these individuals made it so much more enjoyable. If any of you fine folks are reading this, we truly can’t thank you enough for your kindness and hospitality.

With the offer of a ride on the table, we decided to wake up a little later than we had been in an attempt to sleep off the previous day’s treachery. We made a quick breakfast and tore down our camp while Sean drove his minivan over to our campsite. We loaded up our bikes, said our good-byes to our new friends, and headed out. Ultimately, Sean ended up being the one to drive us as Becky decided to stay back at the campground with their kids. 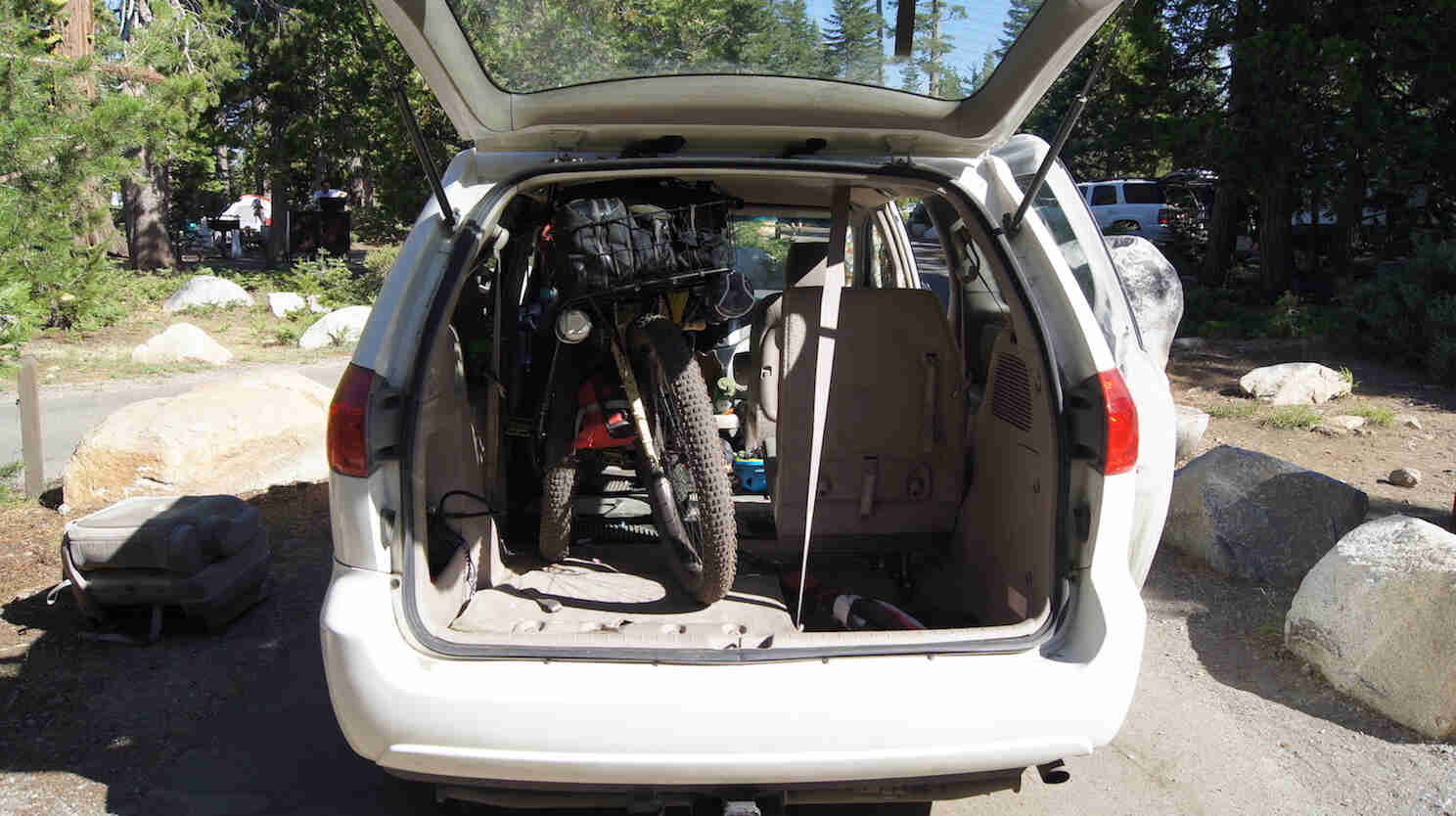 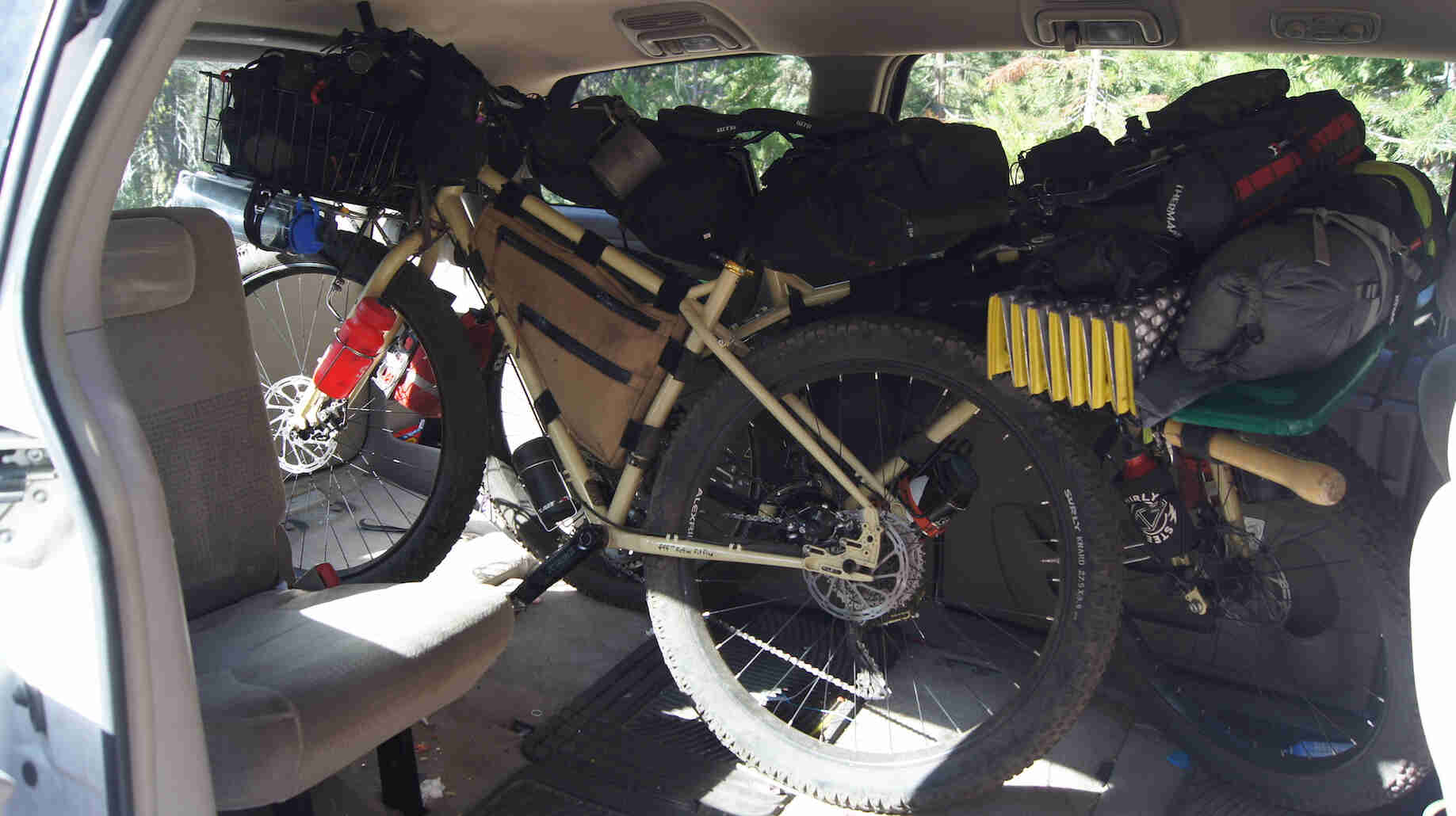 Since Sean didn’t live far from Loon Lake, he served as an excellent tour guide of the area as we drove, pointing out different trails he’d hiked or rode. As soon as I had cell reception again, I was greeted by a text from Fleck saying he was running behind and likely wouldn’t be able to get us until the following day if we still needed a ride. I updated him on our situation. It was about a 45-mile ride from South Lake Tahoe to Northstar and was 100% pavement. This was totally something we could knock out in a day. After discussing with Aaron, I let Fleck know that we’d be riding the rest of the way. Our plans and route may have changed but it would still be so much more rewarding to arrive at Northstar on bike rather than in a van. 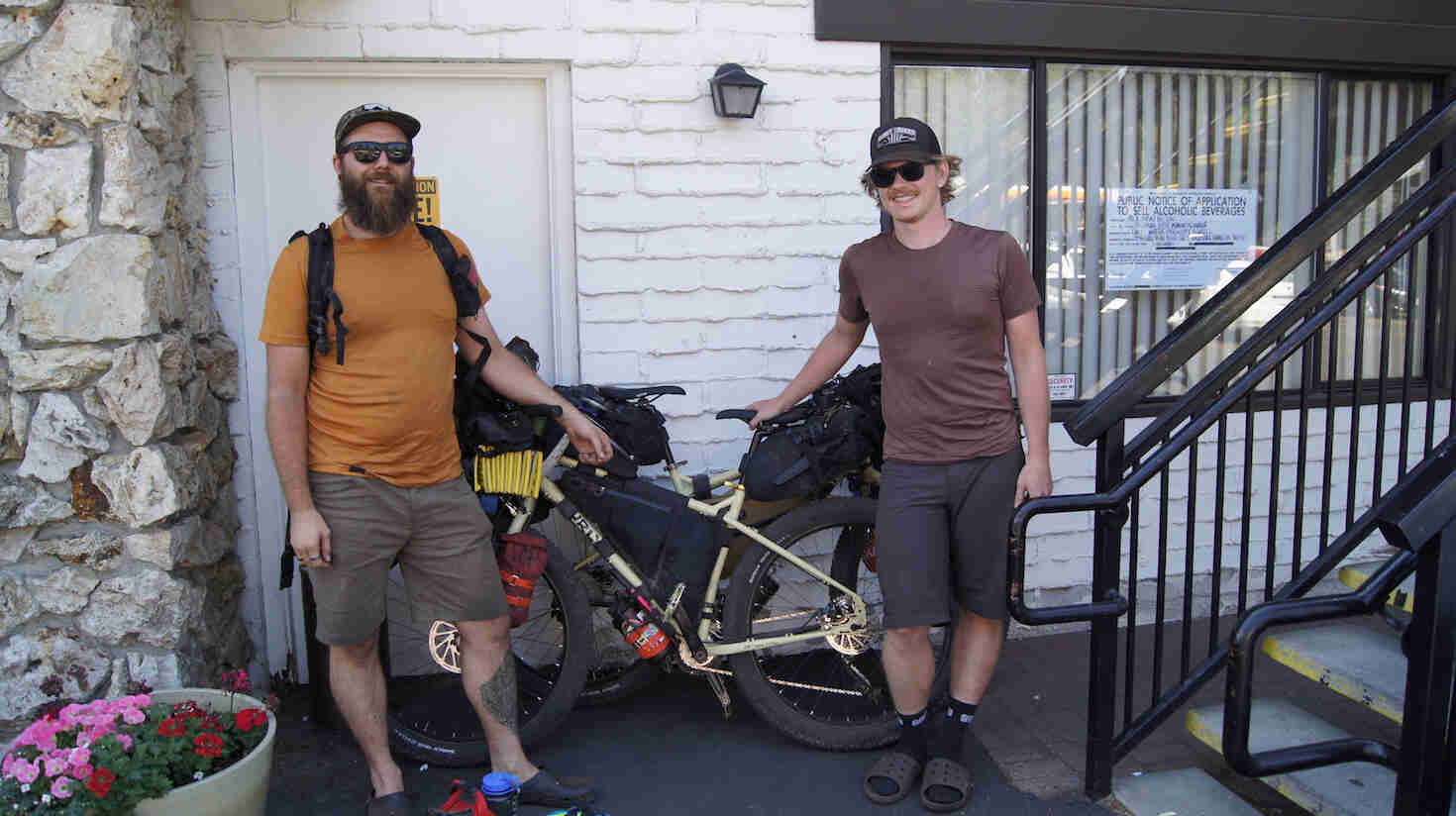 The hour and half drive went quickly and before we knew it, we were unloading our bikes from the van and saying our thank yous and good-byes to Sean. 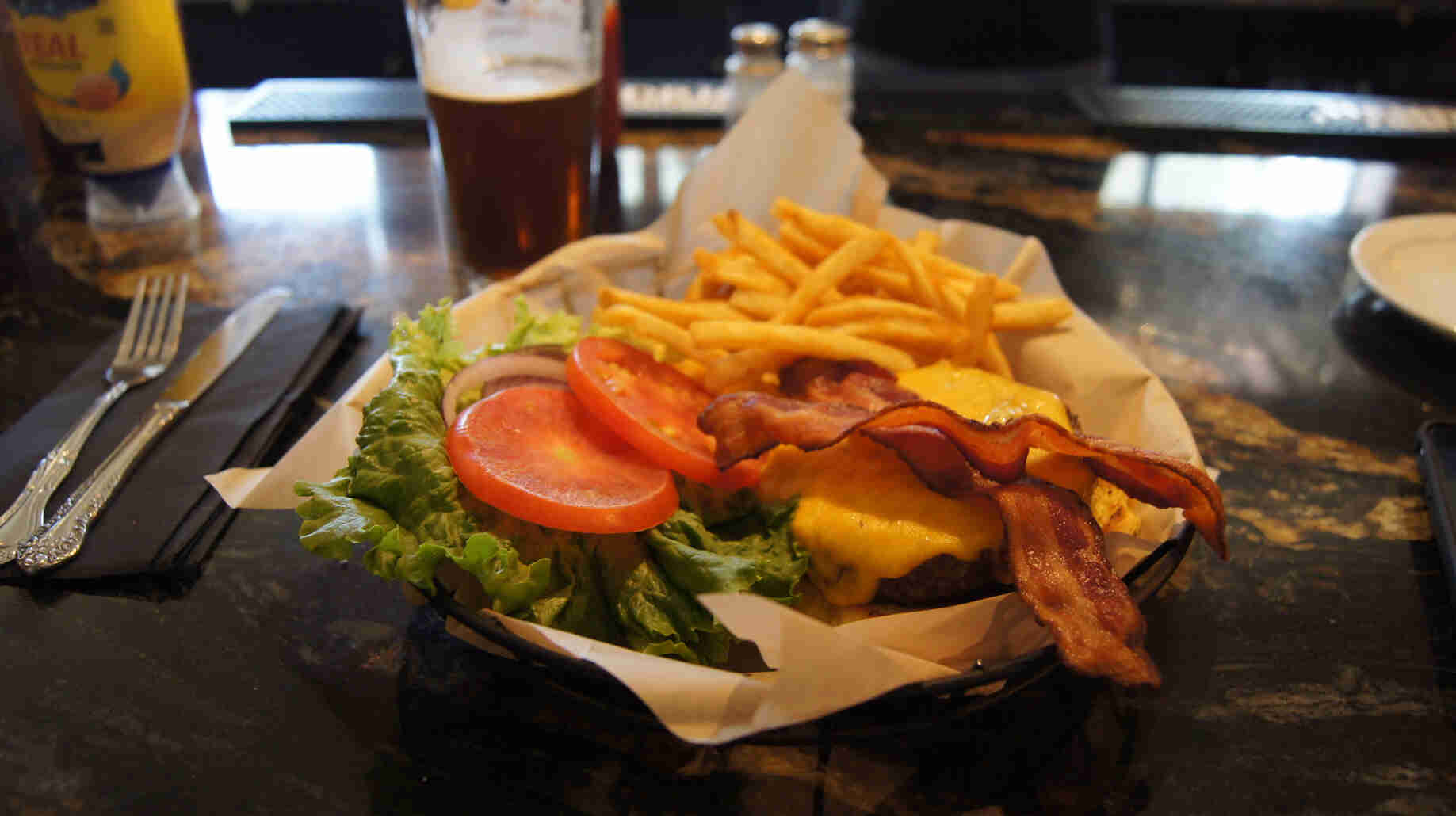 He dropped us off at Cold Water Brewery, a spot that was recommended the previous night around the fire for a beer and burger. We fueled up before hitting the road. 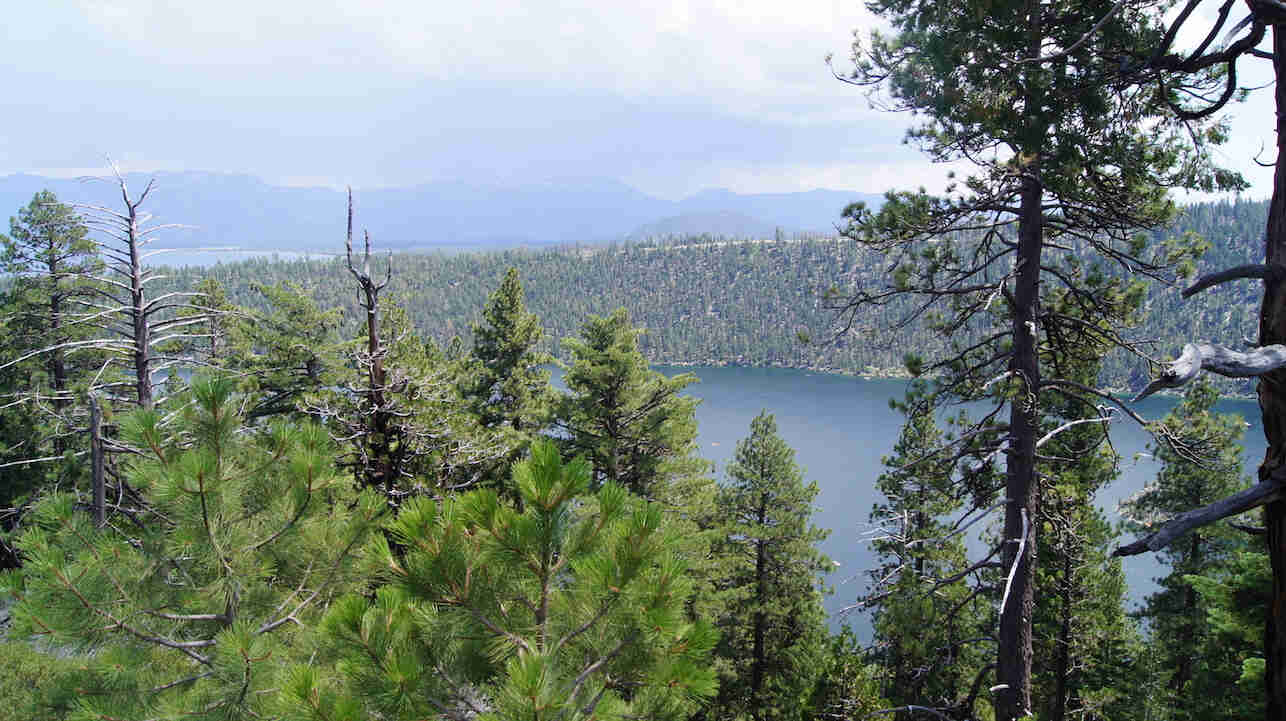 Our route for the final day would follow Highway 89 on the west side of Lake Tahoe. From South Lake Tahoe, we’d first climb up and around Emerald Bay then descend for a while until the road flattened out coming into Tahoma. From Tahoma all the way up to Tahoe City, we could hop on a bike path that ran parallel to the highway and offered spectacular views of the lake. 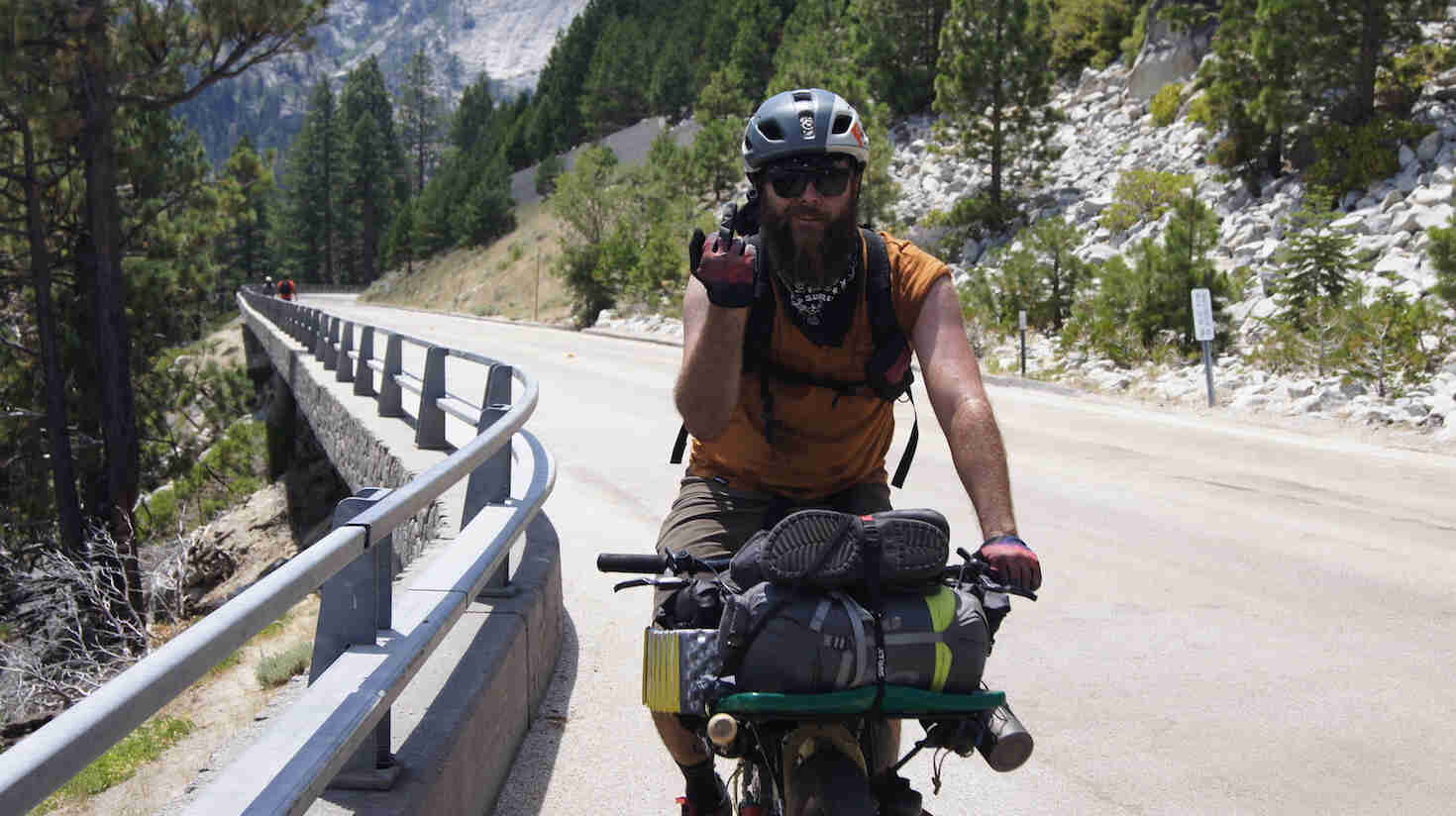 Aaron's sass finger made several appearances on the trip. 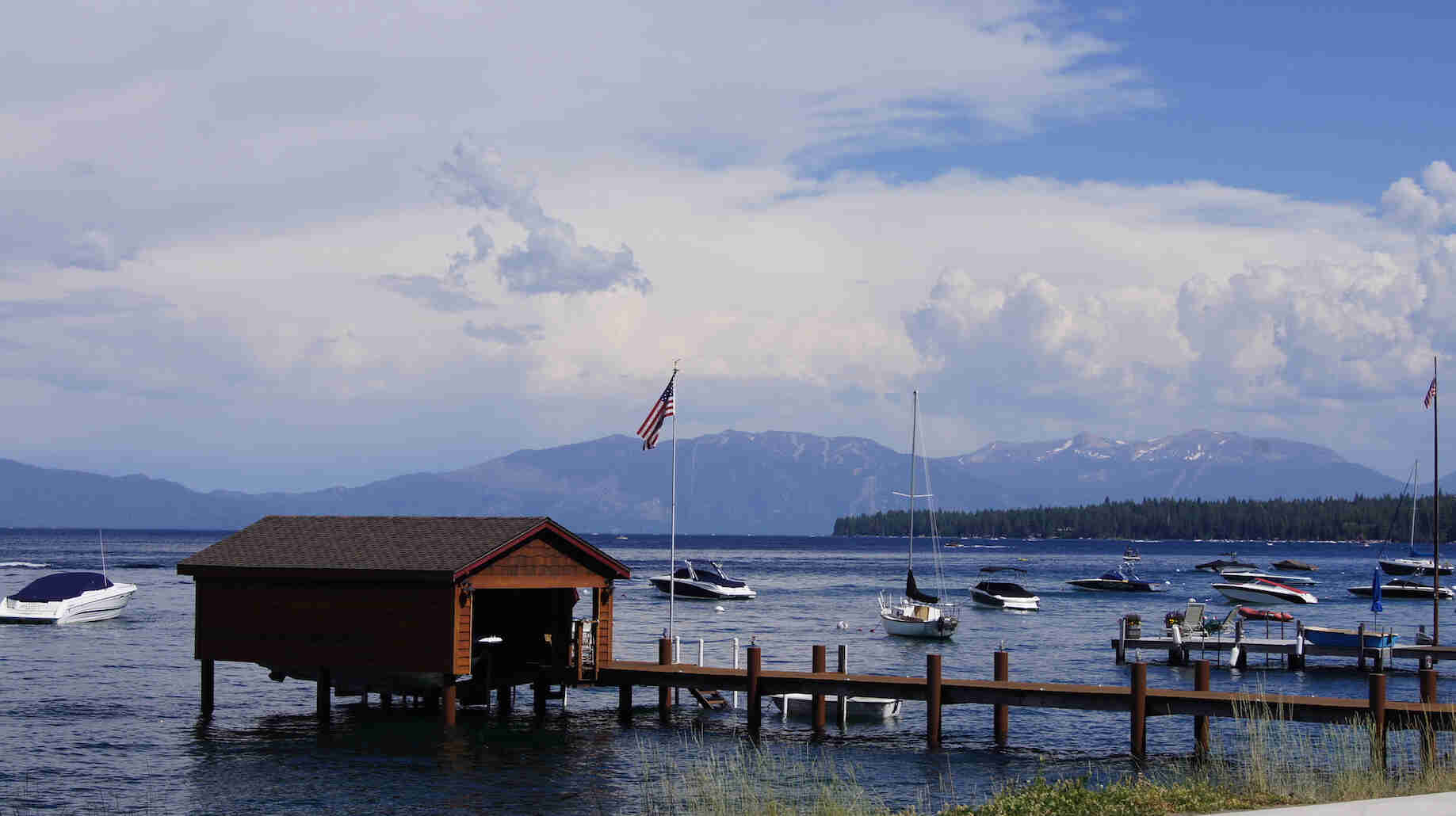 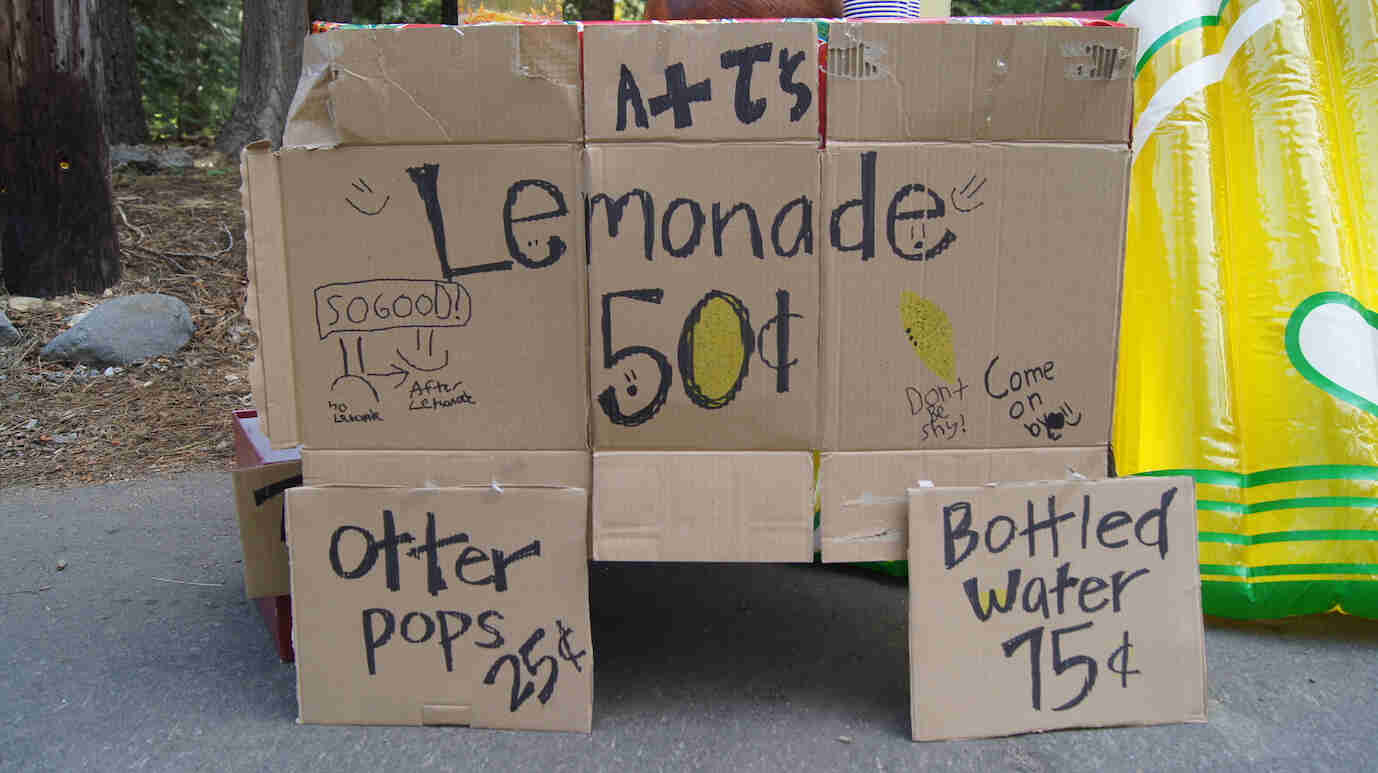 This lemonade stand was like an oasis in the desert. 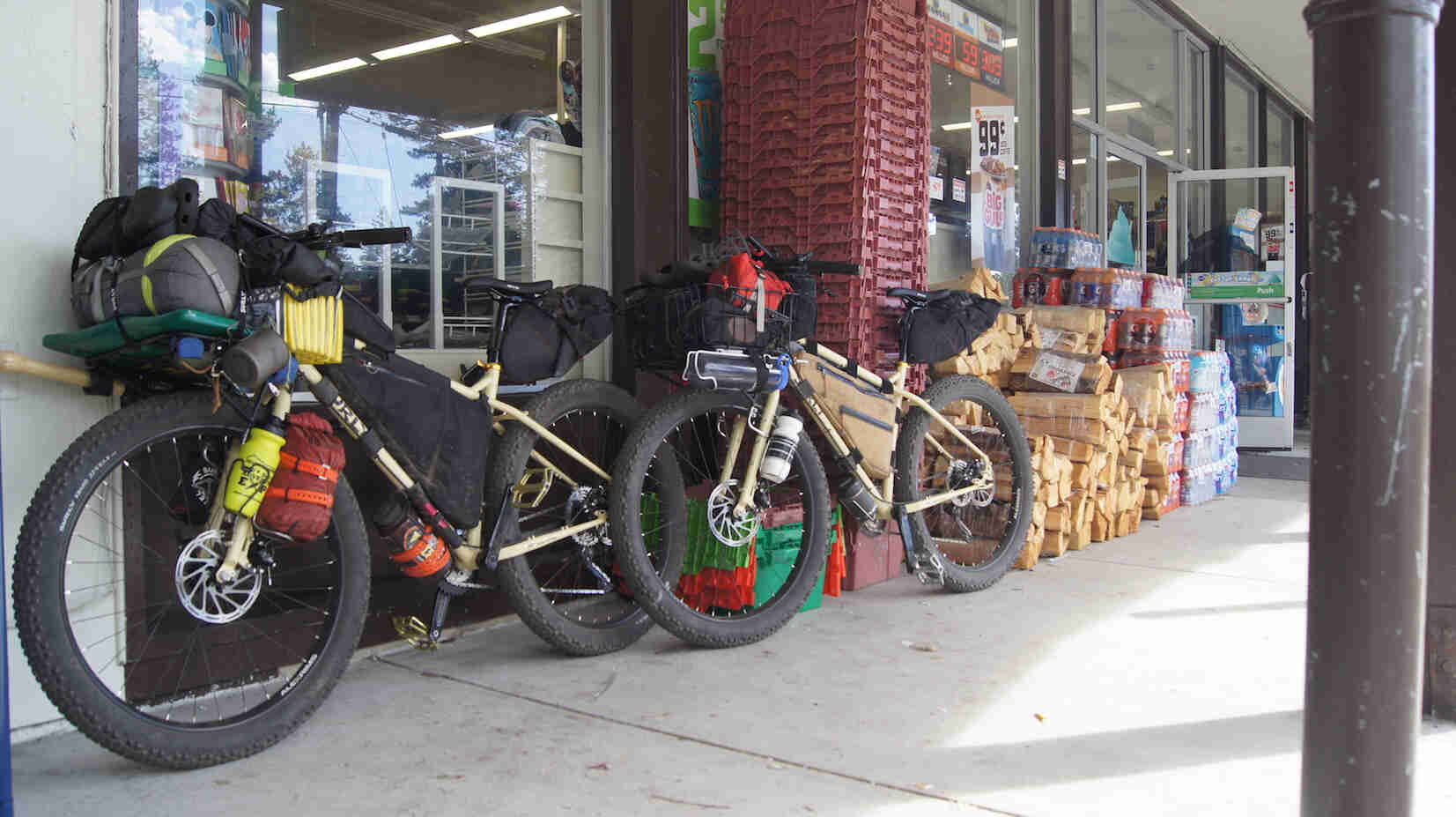 All in all, the ride that last day was relaxed and uneventful, something we definitely didn’t take for granted after the last few days. Once we hit the north side of the lake, we only had one final climb up to Brockway Summit. It was long but a steady grade that didn’t grind us down too much. Plus, we had a cushy 5-mile 9% descent down to Northstar once we got to the top. 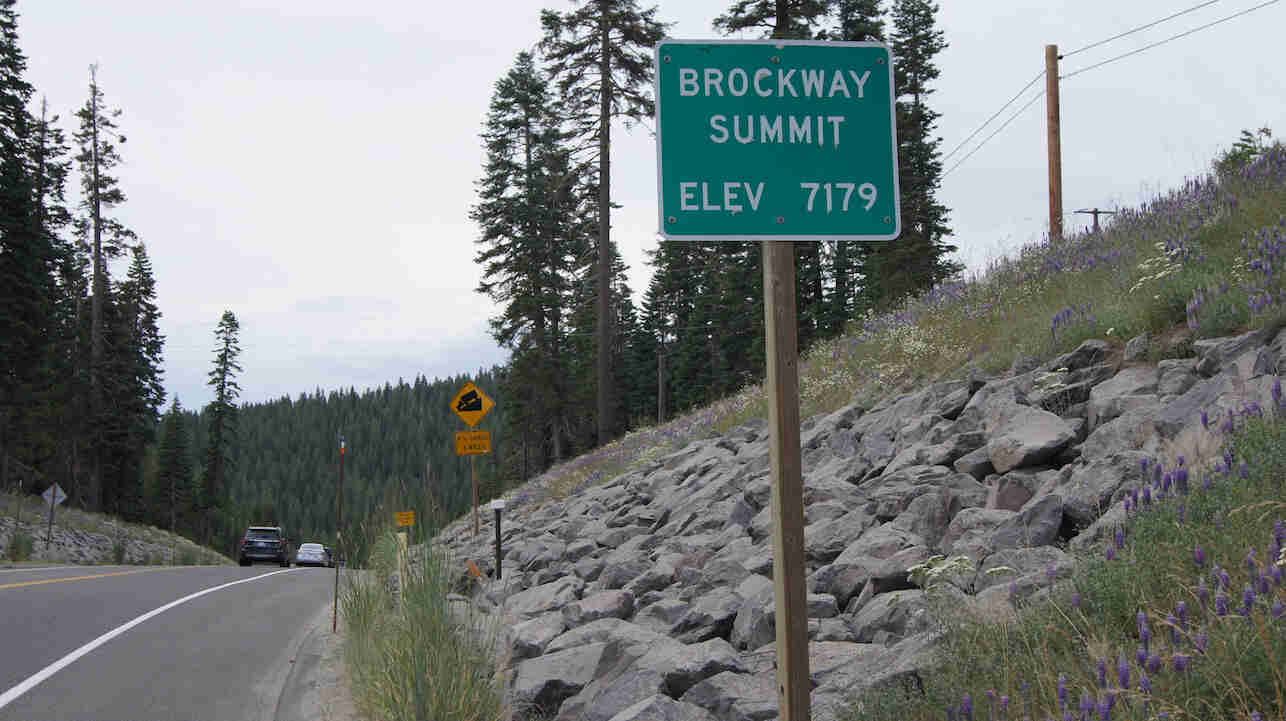 As we began our descent, I started reflecting back on the past few days. Less than 24 hours earlier, I didn’t think we’d ever reach Northstar much less arrive by bike. And yet, here we were. By being flexible with our route and schedule and ultimately, throwing all our pre-determined expectations of the trip out the window, we were able to achieve the goal we set out to accomplish — albeit through different means. 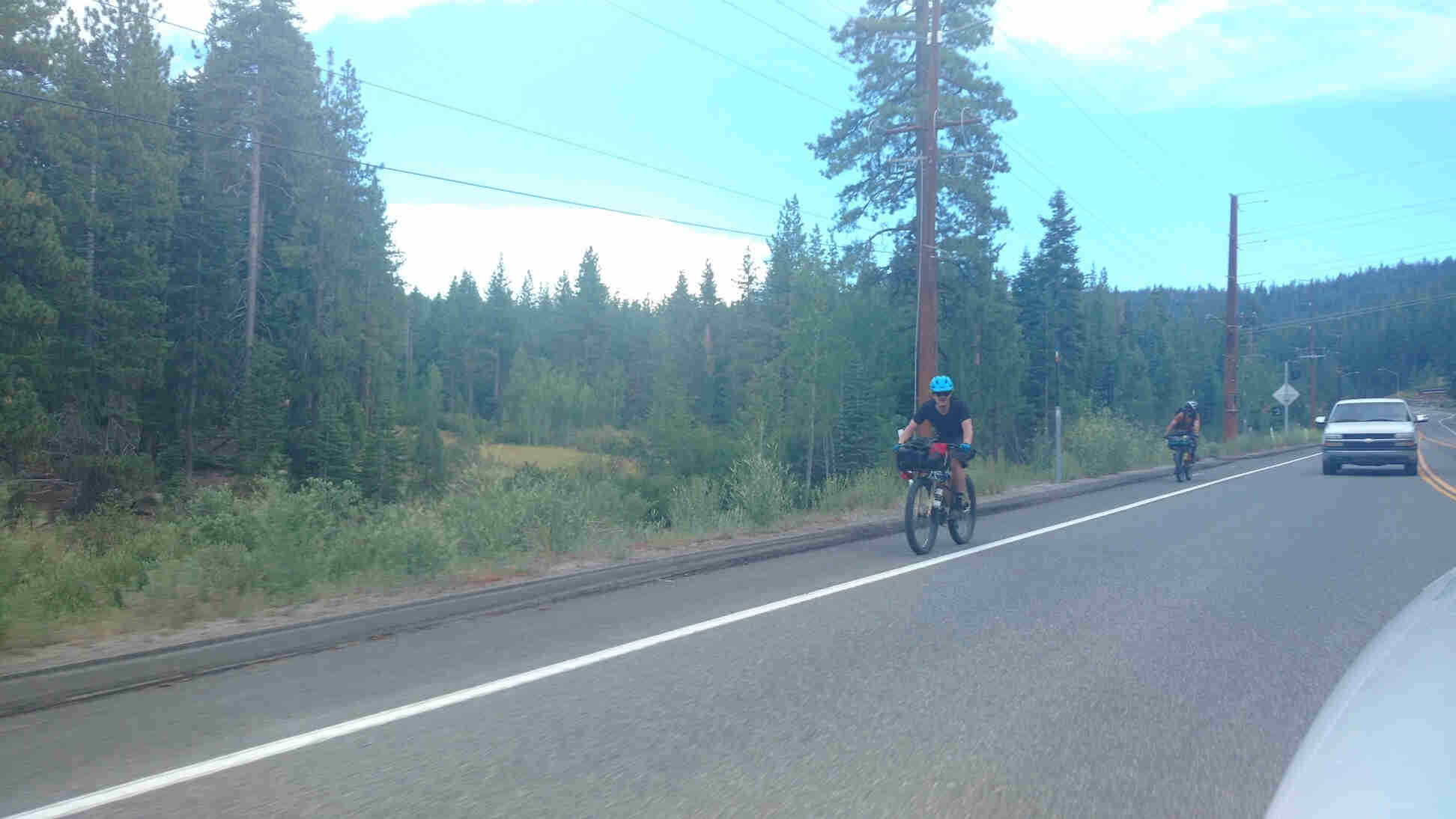 As our trip was rapidly — and I mean rapidly as we were descending at 42 mph — coming to a close, I looked to the left at the car driving alongside me and Zeigle, Scholtes, and a couple other QBP Mothership compatriots snapping photos and video of us descending. We couldn’t have timed it any better. The road began to flatten out and I saw the sign welcoming us to Northstar. 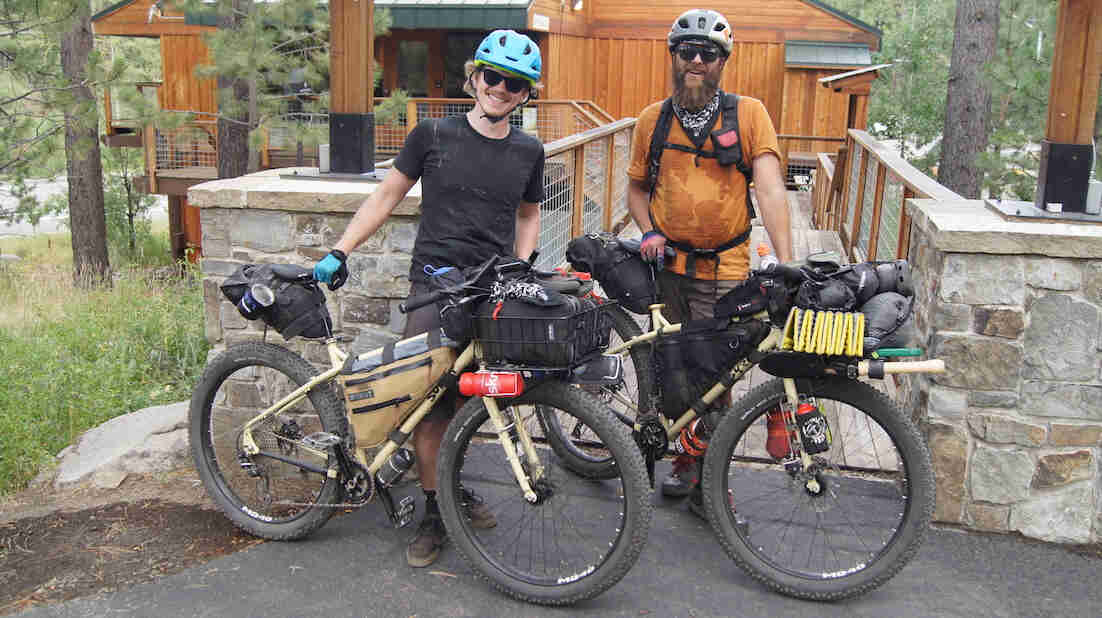 Whether for a day trip or an entire week, I can’t recommend riding the trails around Lake Tahoe enough. Despite all the struggles and challenges we encountered on the route, it was still an incredible experience. In fact, as I’ve been thinking back on the story to write these blog posts, it’s got me dreaming of when I get back and attempt the route again — maybe without the 10+ hour hike-a-bike day this time.

You can find the route Aaron and I set out to complete here. This is the original route I put together and doesn’t include any of the short cuts or sections we cut out.

For a more complete route (and one that I’d actually recommend more), check out the Tahoe Twirl that our friend Cass Gilbert put together. He and Andrew Forron from New River Bikes departed from SaddleDrive and put together a more complete loop around the lake that used our route as a jumping off point. Before they left, I sat down with the two of them to discuss the route and which sections to avoid. When I eventually return to the area and do the ride again, theirs is the route I’ll be doing. In addition to putting together a more complete and better route, Cass is also a much better photographer than I am. Poke around the link to get a better idea of how truly beautiful the Lake Tahoe area is.

See you out there.