“There will be a dessert challenge. I will reimburse everyone $4.20 each to make the most scrumptious camp dessert. You can pool your money with others if you desire. Fabulously shitty prices awarded to the top winners. Fleck will be the judge.”

Another Surly Campout, another food-based competition put forth by the Head Zeigle Scout himself. This time was a little different though. Since he’d handed the judging responsibilities off to John “I’m just not that much of a dessert guy” Fleck, he’d be dipping his toes into the competition himself this year.

You might recall last year’s challenge was dinner for under $5. There were some seriously heavy hitters that really brought their A-game, but it was Kippley’s late-night chili cheese fries that took the grand prize. We all knew Kippley would be one to watch as she had a title to defend. This was confirmed in the grocery store when she walked by me and said two simple words that told me I really had to step it up this year: “Pasta Machine.” 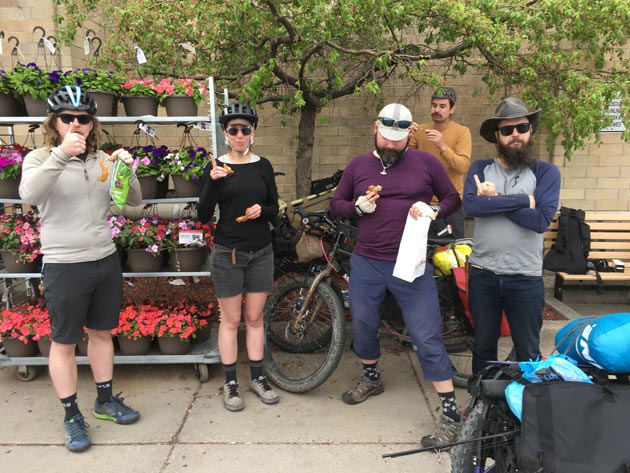 Back at the bikes, we munched on some deli-counter fried chicken that Fleck had procured as we loaded our ingredients on our already heavily-laden rigs. The theme of this year’s campout was maximalism so there were plenty of non-essentials that made their way into our set-ups. We reserved plenty of room for beverages though. After one more stop to acquire said beverages, we headed to the campsite and began setting up. 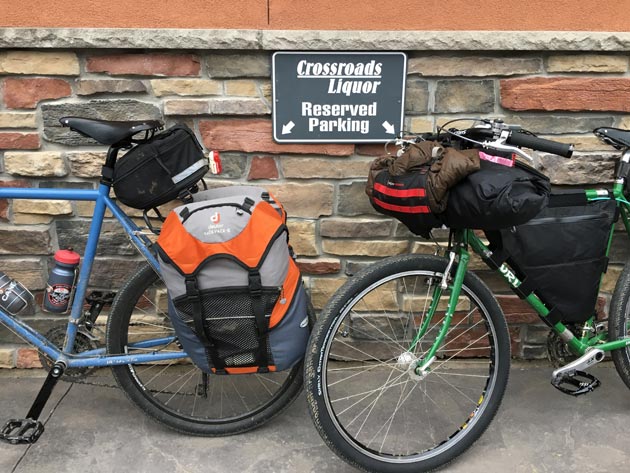 They were expecting us. 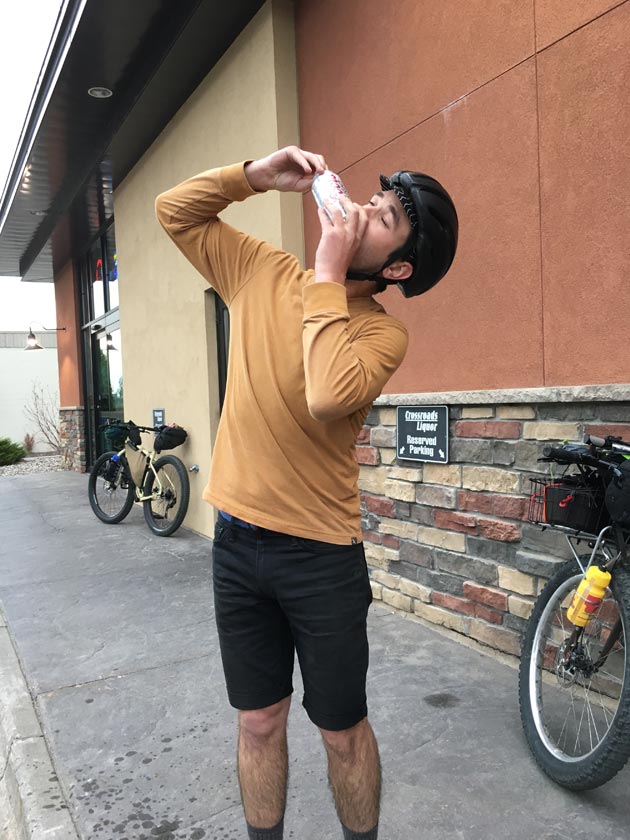 When one of your Silver Bullets springs a leak, you must do what is necessary.

After tents were pitched, beers were cracked, and a fire was built, everyone made quick work of getting their dinner cooked so we could get on with the main event. Various tubed meats made their way onto the grill or skewered over the flame. Zeigle was feeling fancy and made a steak. It was all fine. 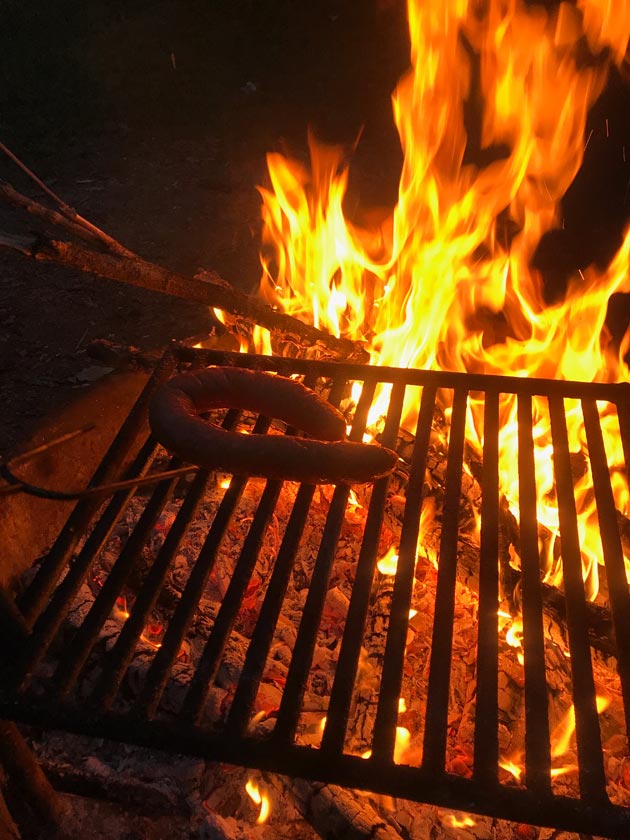 Shortly after everyone was done with their dinner, the competition got underway.

Here’s what everyone came up with:

If you’re thinking that Zeigle just threw some bananas and walnuts in a pan and roasted it over the fire, well… you’d be right. He did use one of the prizes, an airplane bottle of coconut rum to bring out the flavor a bit, which definitely helped. All in all, I’d say it was a pretty valiant effort, but it wasn’t quite enough to break into the top four. Fleck awarded his effort fifth place (or dead last if you want to be a dick about it), for which there was no prize.

Well, I guess there would’ve been a prize had Paul not used it in his dessert.

The newest member of the Surly team, this was Andrew’s first campout cooking challenge. I must say, he brought some really good flavors to his dessert, but his presentation was lacking a bit. He started things out by mashing the shit out of some off-brand (because you know, budget constraints) Oreo cookies until all he had was some crumbs. He added some almonds for texture and from there, began forming them into small cookie shapes and frying them in a pan over the fire. I’m not sure if he used a binder of some sort of not but they immediately fell apart in the pan, so my assumption is that he didn’t. After plating them, he added a little whip cream that I had left over from my dessert to top them and mask the fact that they kind of looked like he ate a bunch of coffee beans and crapped them out on the plate. Despite looking like caviar of the ass, he had some really strong flavors going on, so Fleck awarded him fourth place. 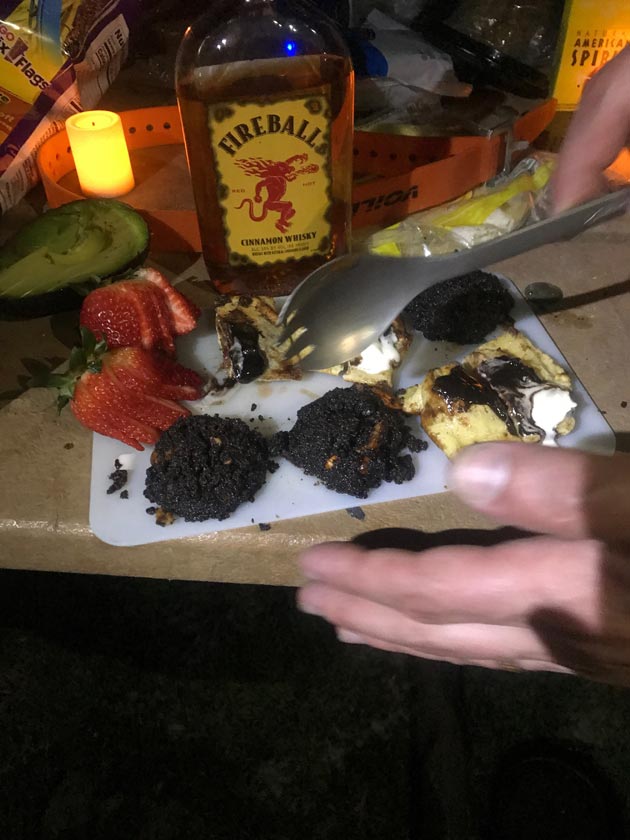 A late entry to the competition, it was looking like Trevor was going to sit this one out. After everyone else’s concoctions had been consumed and Fleck was just about to go into deliberation (which was him walking off into the darkness for some alone time in the woods for about fifteen minutes), Trevor got in the game. Nobody, including Trevor I’m fairly certain, knew what he was making but it started with him cutting a donut in half and putting it on the grill to caramelize. He then skewered a couple bananas and started roasting them over the open flame whilst occasionally pouring fireball over the top.

When it came time to plate, he sandwiched the banana between the donut halves, put a little melted chocolate and some whipped cream on top and said bon appétit. It was good. Really good. So good in fact that it made Andrew — who, we learned on this trip, loves using phrases that can really only be described as “cute” — utter the words “holy manoli” as he was eating it.

And thus, Trevor’s Holy Manoli was born. For his flavor, presentation, and general sense of not knowing what the hell he was doing, Fleck awarded him third place. 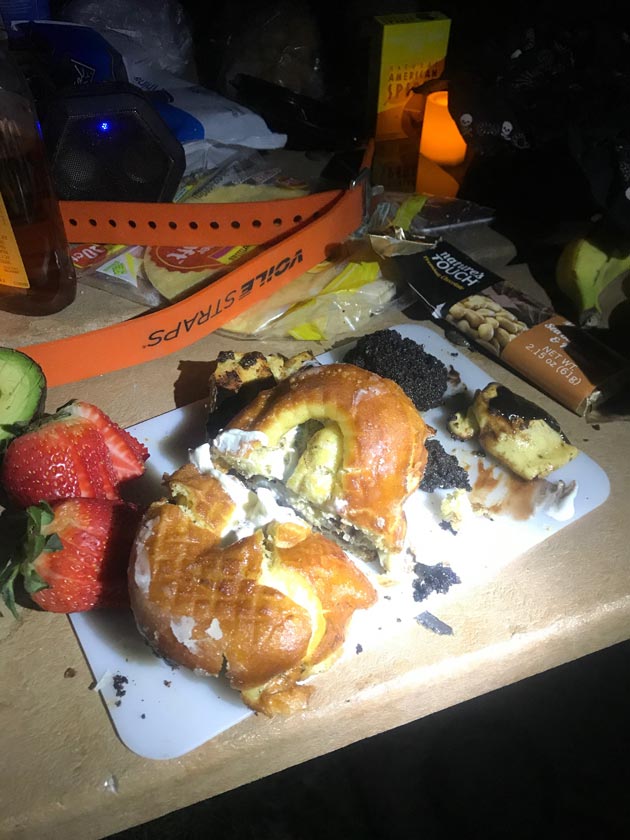 As my kielbasa tacos were happily digesting, I quickly began getting my dessert creation going. In keeping with the maximalist theme, I’d lugged a full size cast-iron Dutch oven and secondary cast-iron skillet to aid in my baking. As soon as I heard tell of the challenge, I knew that a Dutch baby was in order. As a topping, I decided to go with Fireball-flambéed apples and whipped cream that I made from scratch. I pre-mixed my dry ingredients at home and transported them in a blender ball shaker cup. To that, I added my two beaten eggs and some milk and shook the shit out of it.

When my Dutch oven was pre-heated, I melted some butter and poured in my batter. I threw the lid on and got to work on my apples. I diced them up and began sautéing them in butter over the fire, occasionally adding in some fireball to flambé the apples and reduce into a nice caramelly syrup. For my whip cream, I cleaned out my shaker cup, added some heavy whipping cream and a free sugar packet I’d scored at the grocery store deli. I commenced shaking until I couldn’t hear the blender ball moving anymore.

My timer beeped, and I checked on my baby. It wasn’t puffing up like I wanted it to. I began to doubt how it would turn out. I decided to give it a few more minutes in hopes that it would miraculously decide to defy all rules of chemistry and puff up in the final moments of cooking. It didn’t.

When it came time to plate, I took the Dutch baby out of the Dutch oven (a bit of an odd-sounding phrase if you remove the word Dutch from it…) and poured my apples on top. I then stupidly put my whip cream on it without giving it sufficient time to cool so I ended up with quite the mess. But it was a goddamn delicious mess if I do say so myself. Everyone really loved it and for a while, I thought I had it in the bag. However, Kippley did as Kippley does and knocked another dessert challenge out of the park so I ended up with second place. Fleck said we were neck and neck, but he gave me second because I doubted myself. So, in the end, I came away from this competition with a valuable life lesson… and a tiny bottle of Peppermint Schnapps. 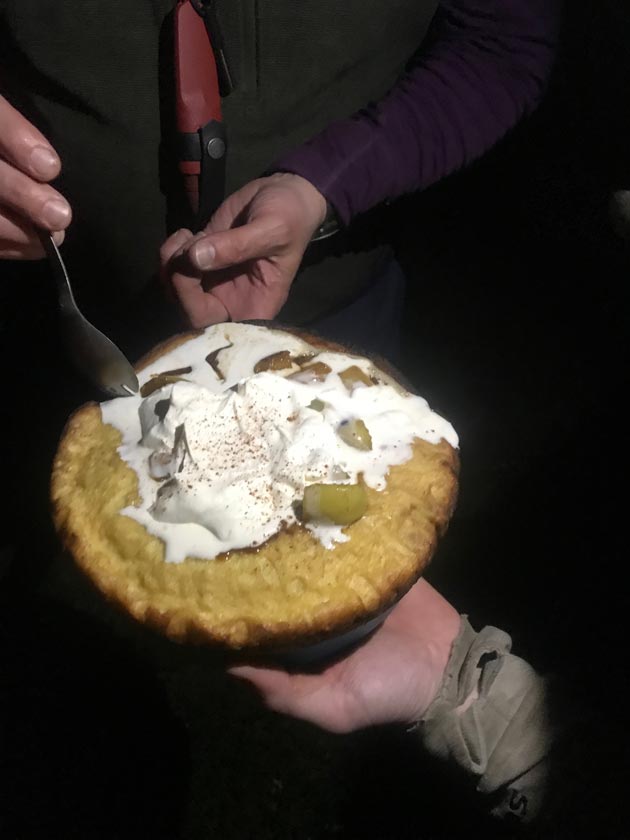 As I was toiling over the fire with my various cast iron implements, Kippley fetched the fabled pasta machine from her pannier and secured it to the table. She then began mixing a dough in a ziplock bag. As she was kneading, everyone’s curiosity was piquing. What the hell was she planning on making with a pasta machine? As she started rolling out the dough, it became apparent it was some sort ravioli situation. She’d also bought a package of strawberries and smartly, and bravely, meandered down the clearance aisle of the grocery store for some sea salt caramel Rolos. 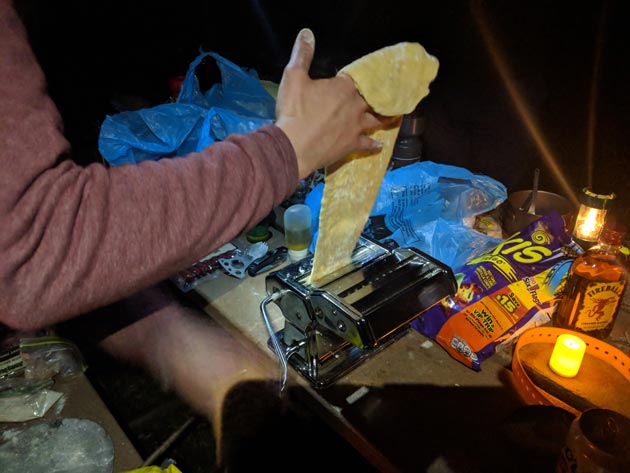 With her dough rolled out, she began assembling; first placing a slice of strawberry followed by a Rolo on the sheet of dough. She folded them over, sliced them apart, and put them on her oiled-up pan. She fried them for a while and plated, topping each little pillow with a dollop of Andrew’s leftover cookie mix and my whip cream.

Friends, I’ve eaten a lot of pretty good food in my lifetime. Good food is what I live for and good food while camping, well, that’s like a bonus. I can say with certainty, that I’ve never had something as good as these raviolis while sitting around a campfire. Kippley really outdid herself this year and she did it with a pasta machine she’d only owned for five days. That’s impressive if you ask me. Evidently, Fleck thought so too and awarded Kippley’s Dessert Raviolis first prize. 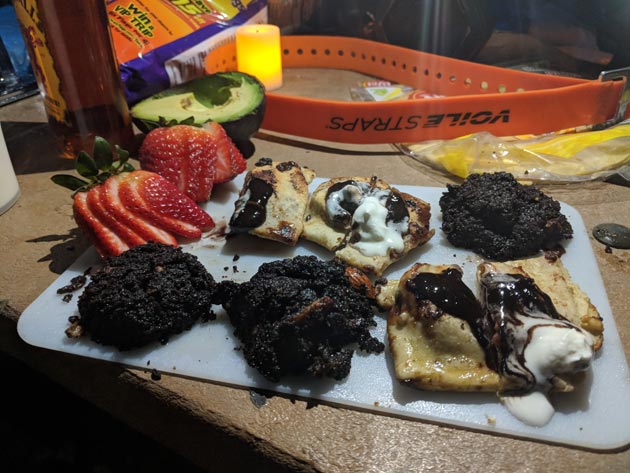 Since Dan decided not to compete in the competition, he was on breakfast duty. He grabbed a dozen eggs from the store and made a big pan of scrambled eggs using some of the desert sage that Trevor found in his pocket the night before. When combined with some tortillas, breakfast sausage, and Fleck’s special reserve of leftover Taco Bell Fire Sauce packets, we had ourselves some mighty fine breakfast tacos. 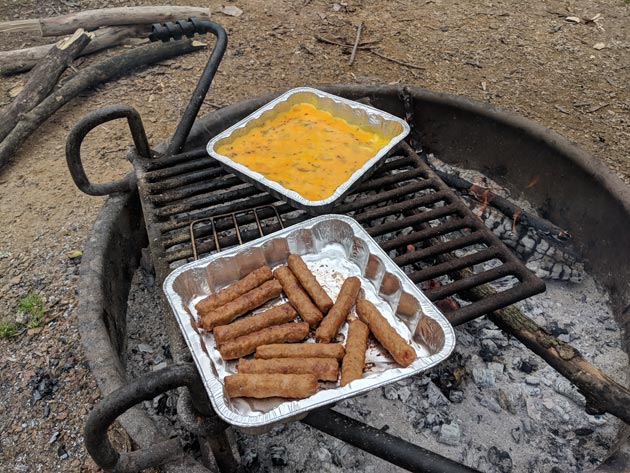 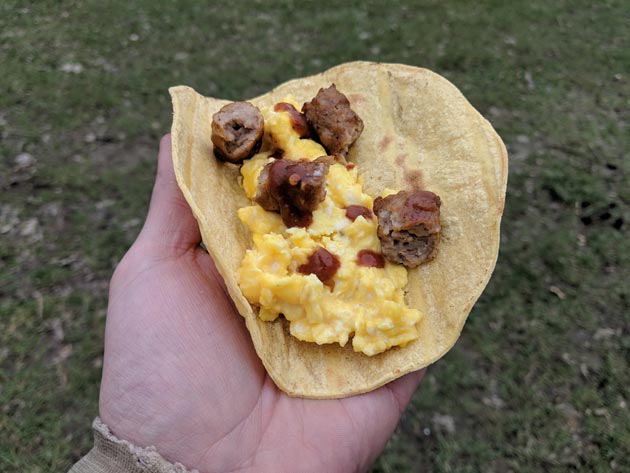 After breakfast, we packed up and pointed towards home. Of course, there were a few beer stops along the way turning this year’s sub-24 into more of a sub-40. But that’s fine. 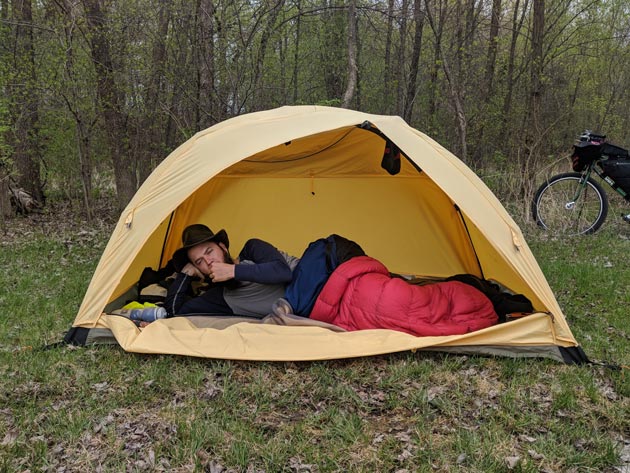 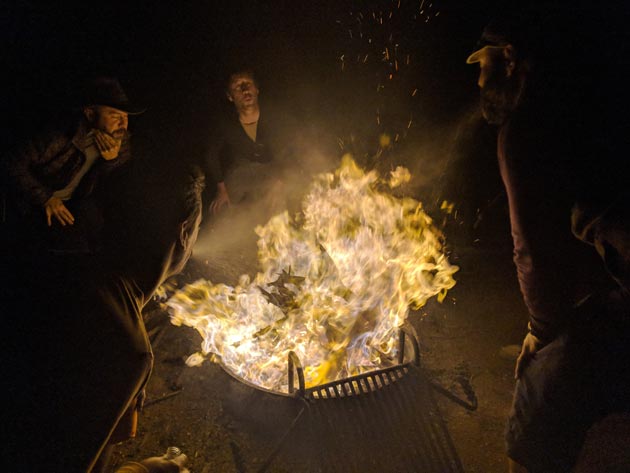 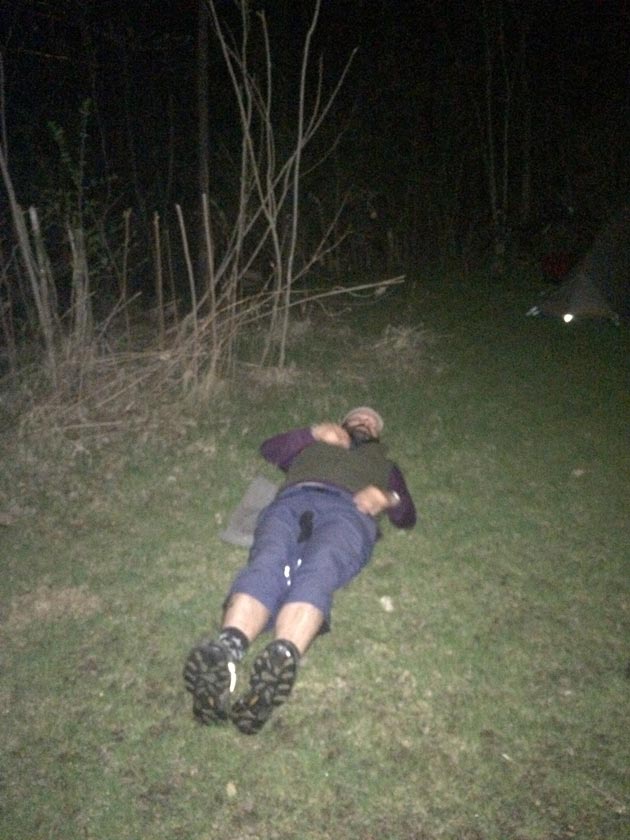 And now for no real reason at all, please enjoy some Type O Negative on the house.