“You’ve each got a five spot to spend for dinner. Prizes will be awarded for taste, nutritional value, and creativity. You probably won’t want the prizes.” 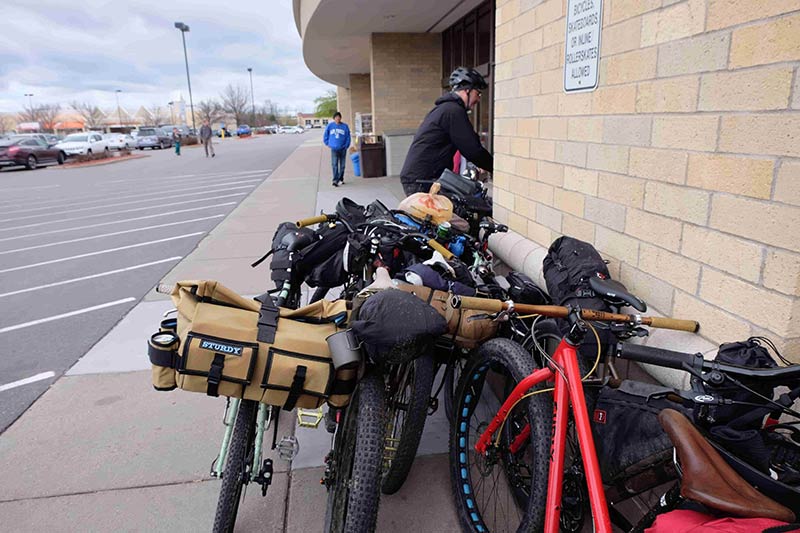 That was the challenge put forth by Zeigle as we all gathered outside the grocery stop on our recent annual spring campout. We were still aways from camp and there was bound to be a couple more beer stops so the less perishable items, the better. After dispersing handfuls of Lincolns, we all descended upon the store — the canned food aisle being the first destination for most. Alliances were quickly formed as Zeigle said we could combine our funds if we really wanted to kick our cuisine up another notch. He also informed us that condiment packets were free spaces if we could find them. 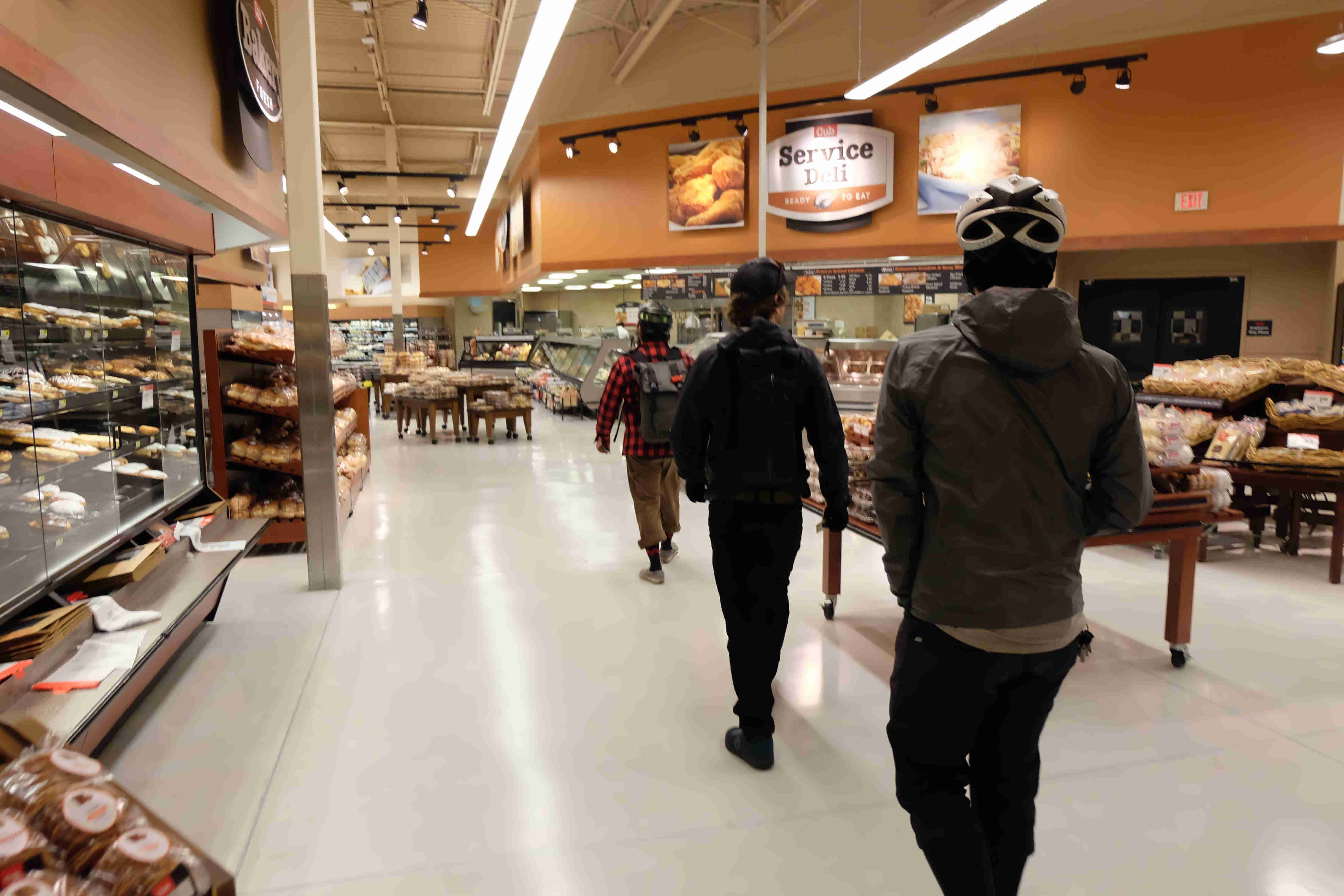 Back at the bikes, it was very apparent that there were some serious camp gourmets among this group and competition would be stiff.

Ben started us off right with his deep-fried cheese curds from scratch. These melty little pillows were an early favorite and somehow only set Ben back a couple bucks so he ended up making some money off them.

Fill your camp mug or small pot about ½ full with oil, you don’t want to boil over. Beat one egg in a small plate or similar. Cut up the cheese into nuggets. Heat oil over stove, drop a little egg in to see if it’s hot enough. Coat cheese in egg wash, batter, coat in egg again. Fry until they start to float or you see some cheese coming out. Scarf! 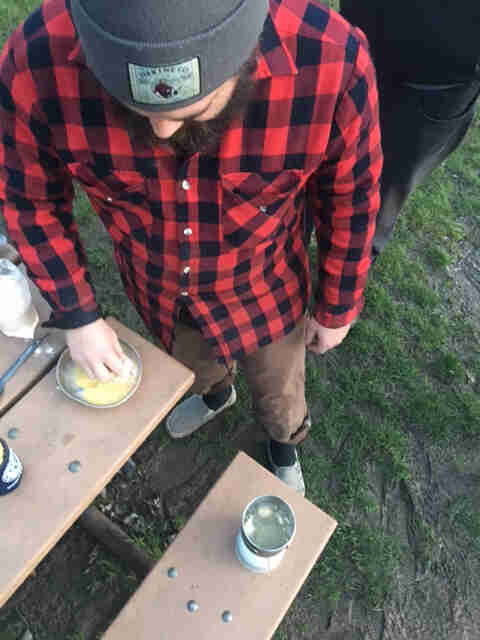 Next up, was Skoglund’s Scotch egg. Yup, you read that correctly: He made a fucking Scotch egg from scratch with a camp stove and it was goddamn delicious.

Boil one egg to your preference.  Soft boiled ~5 minutes, Hard boiled ~8 minutes (I recommend you hardboil eggs the night before to save on work and fuel). Peel the boiled egg and wrap it in sausage as thinly yet uniformly as you can. Beat the other egg up and coat the outside with egg to keep it together. Deep fry in hot oil ~ 5 minutes if you can. Pan fry if you gotta. You can also cook it on a stick over the fire. Cut in half and dip in mustard. Get wasted. 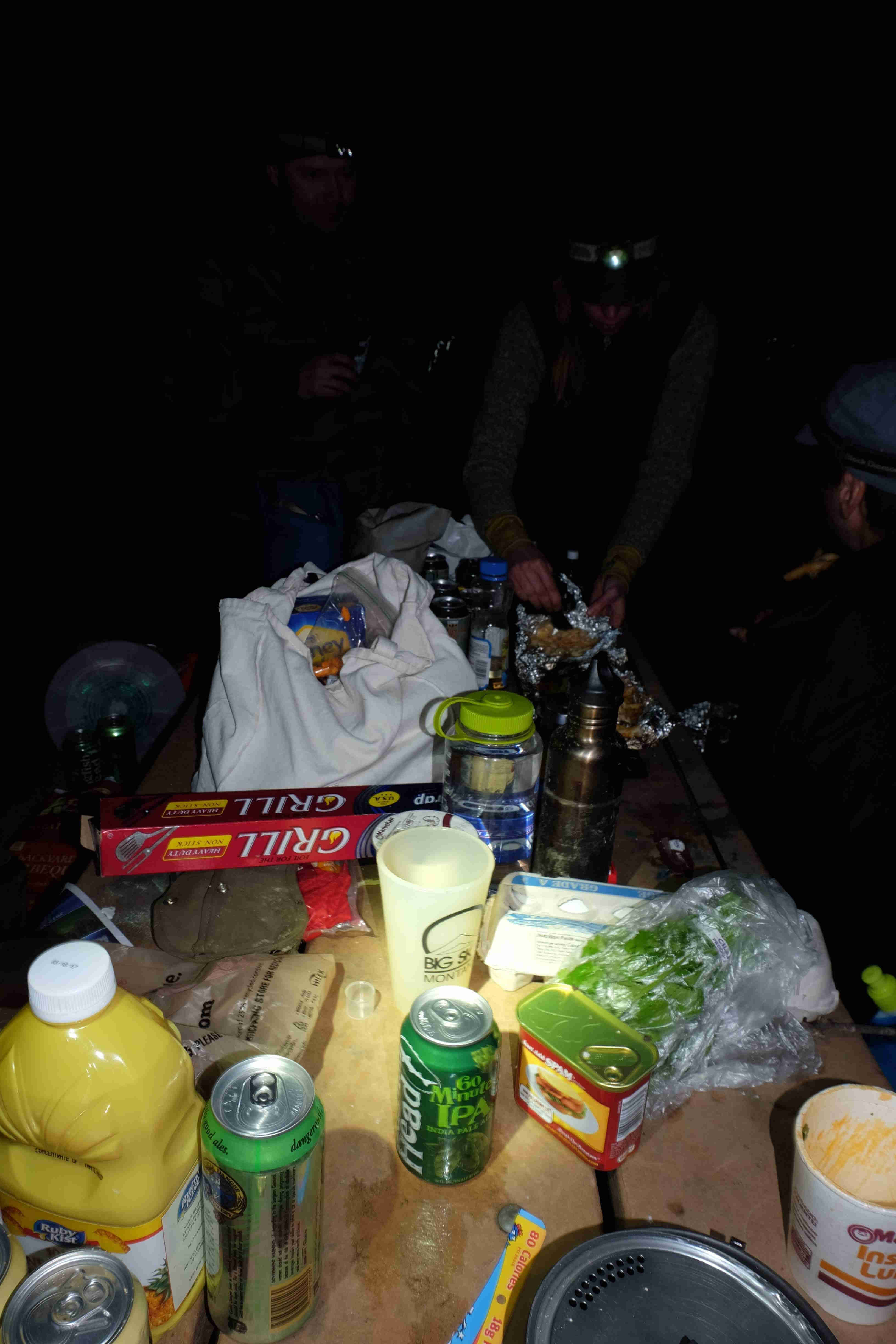 I managed to pull off a two-course dinner with $.28 to spare. It wasn’t all that fancy but it wasn’t too terrible either.

Start by throwing some of those sardines on a tortilla as an appetizer to tide you over while you’re cooking. Skewer a couple of the hot dogs and get a light roast on them over the open fire. They should be slightly charred but not quite to the point of splitting open and shooting hot cheese all over everything. If that happens, you just lost a lot of your flavor and you should just start over. Pull them off the fire and let them rest for a minute while you get your stove started and your butter packet melting in a small skillet. This will allow the cheese some time to coagulate a little so that it doesn’t all just ooze out when you start cutting it up. Cut them up into uniform quarter inch cubes and add to the melted butter in the frying pan. Sauté your hot dog cubes for a minute or two before adding about half the contents of the taco seasoning packet to the pan. Stir until seasoning is well incorporated into butter and meat. Serve in a flour tortilla. Normally, I would always recommend corn over flour tortillas but when you’re on a budget, ya gotta make do with what’s cheapest.

Not eligible for the competition, Zeigle, Sov, and Fleck really could’ve done whatever the hell they wanted for dinner but still decided to play along anyway. Well, except Sov. He spent like $20 at the grocery store but got enough fried chicken for all of us to gorge ourselves on mid-ride. Thanks, Sov! Anyway, the three of them pooled their moneys together to get some pretty tasty fire-cooked carnitas tacos.

Shred the pork on a Surly mud flap. Pour a tsp. of oil on a 16” piece of aluminum foil. Coat one side of 4 tortillas with oil by on the foil. With the oil side down, add some pork, cheese and salsa to the middle of each tortilla and roll. Line up the tacos in the middle of the foil and close the ends of the foil to seal. Makes 3 foil packs of 4 tacos each. Cook over coals on an open fire for about 15-20 minutes. Open the foil and enjoy. 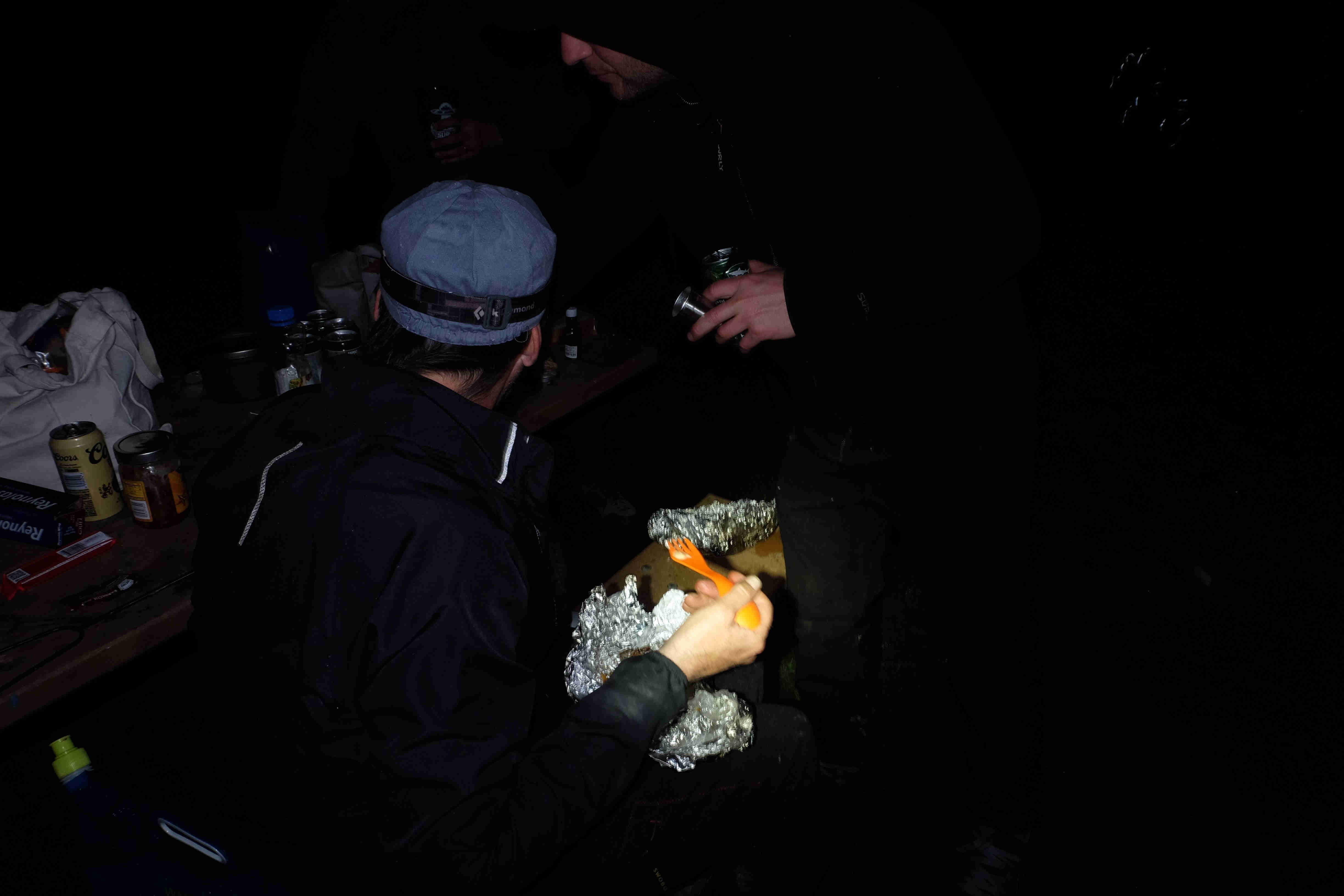 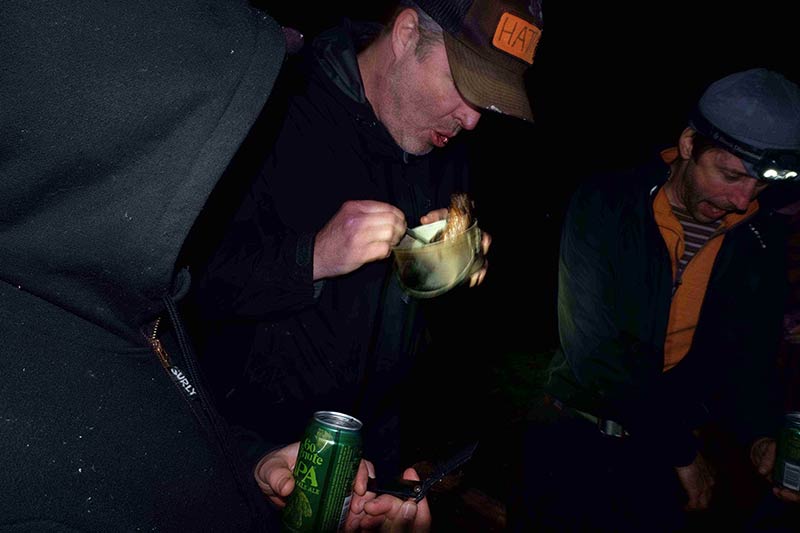 Kippley came out swingin’ with some seriously heavy-hitting chili cheese fries. She also strategically waited to reveal her finished dish until much of our beer reserve had been depleted. Pretty smart move if you ask me.

Divide fries between two sheets of aluminum foil, toss with a tablespoon or so of oil and seal into two packets. Place over a fire, flipping and turning occasionally. Depending on your ride time from the grocery to where you’re setting up camp, cook times will vary. I found 25 minutes to be appropriate for the half-thawed state of these seasoned spuds. When fries are close to finished, empty chili into a cooking pot and warm over the fire, stirring occasionally. When fries reach a cooked through, slightly crisp desired state, remove from fire, open tin foil and pour chili over the top of the fries. Sprinkle with hot sauce and parmesan cheese. Feeds 2 as a meal, or 11 humans around a fire in the woods if you’re into sharing. 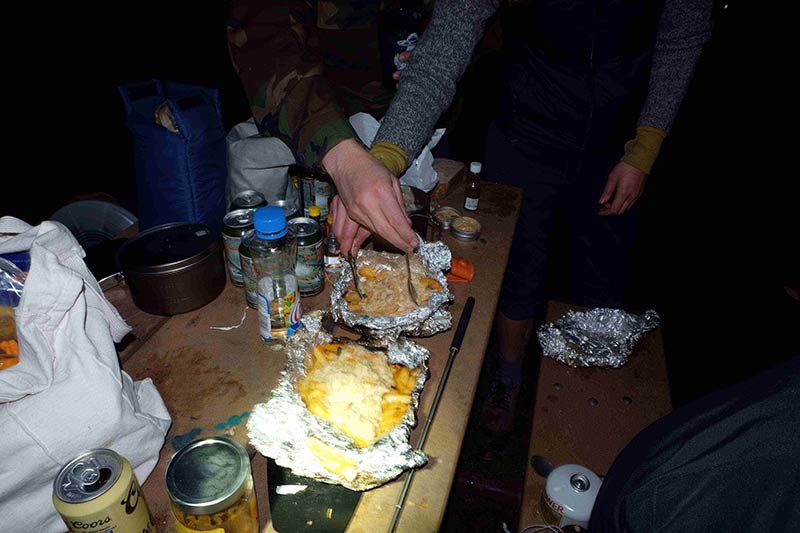 Kippley’s dish was the clear winner of the evening and she got her pick of the remaining prizes. Oh yeah, and those prizes that Zeigle said we probably wouldn’t want ended up being airplane bottles of shitty booze. Up for grabs were Southern Comfort (which I was lucky(?) enough to grab), Havana Club, Bacardi, and some others that have been blocked from memory.

After all the food and libations were gone and the fire began to wane, it was time to call it. 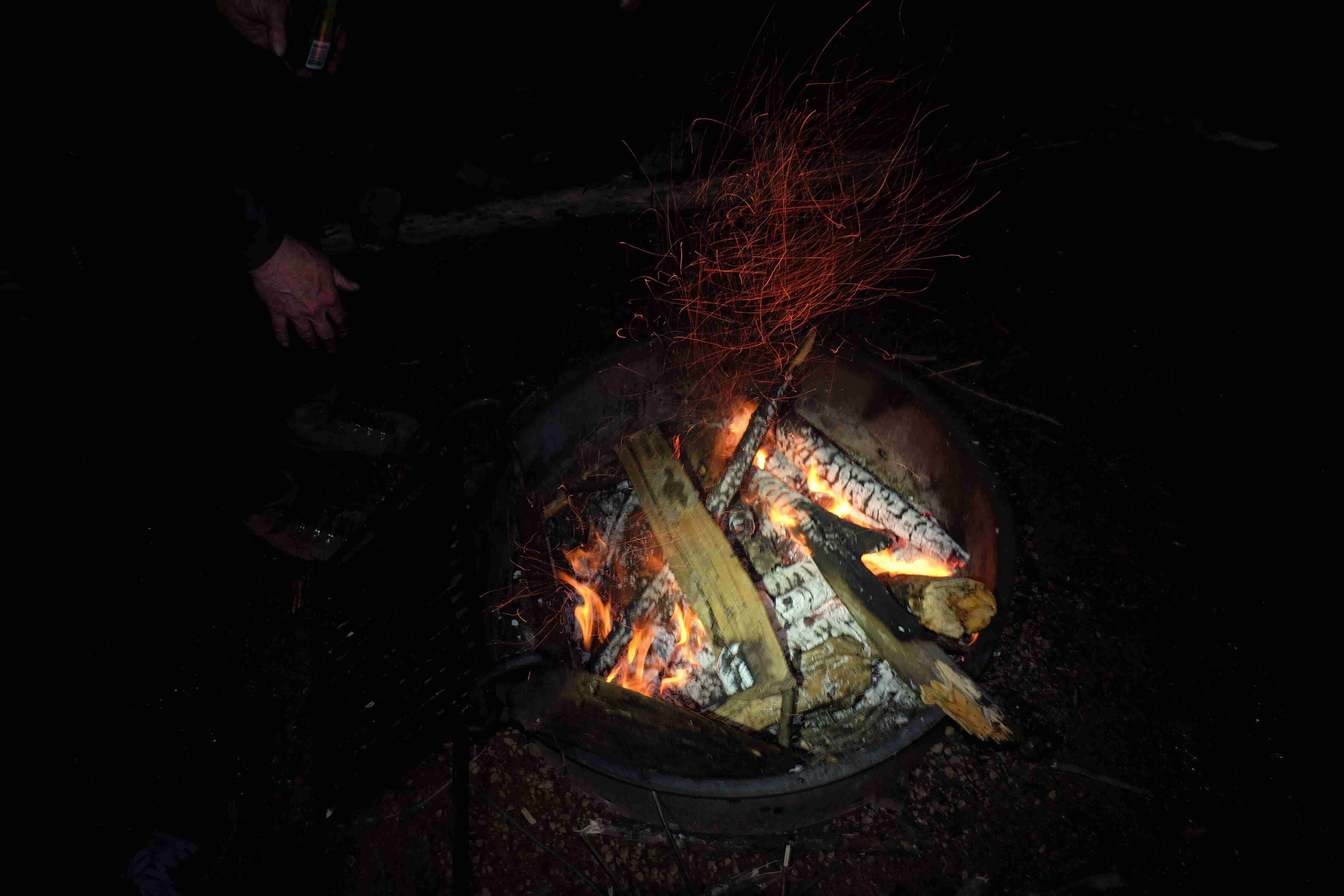 The next morning went about as well as you think it did. 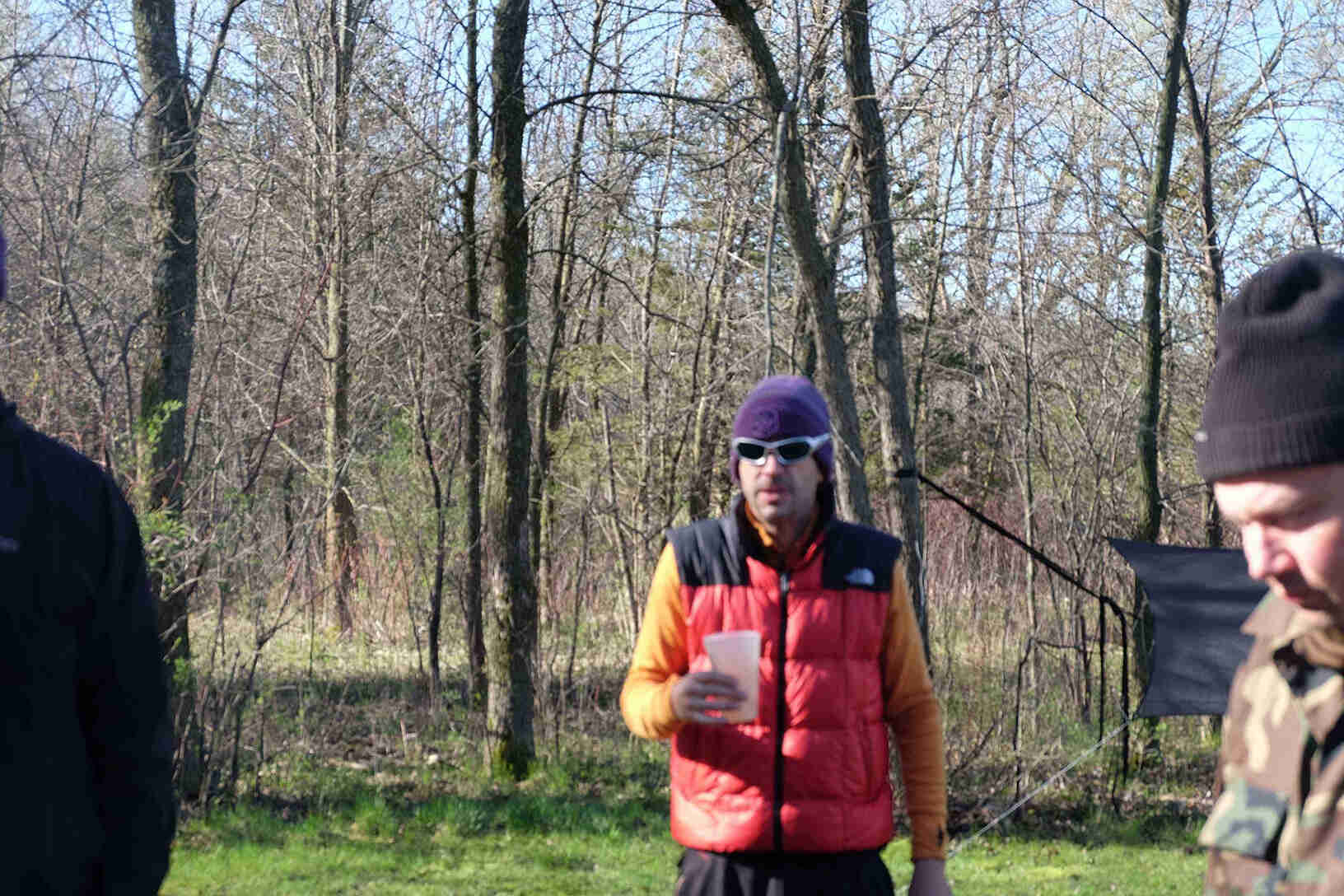 We're not blurry. You're blurry.