The Art of the Bivouac Expanded: Shelter from the Storm

Last fall I wrote an essay about an impromptu overnighter spent on a picnic table in a park. It was called The Art of the Bivouac. The focus was on minimal gear and how little one truly needs to simply pass a night outside in relative comfort when the weather is fair. Expanding that minimalist approach extends options and increases comfort. If it had rained that night while I slumbered on the picnic table I would have had a completely different story to tell.

(Truth be told, I probably wouldn’t have written that blog. Who wants to read about some weirdo voluntarily sleeping on a picnic table in the rain?)

I’m constantly tweaking my solo kit. Various types of trips help shake things out. The Dorset Gravel Dash back in May (which I blogged about here) provided an opportunity for me to tune some new gear that had been on my wish list for years.

My preference is to sleep on the ground. I’ve tried hammocks in the past. I have some very good friends whose opinions I sincerely respect who are diehard hammock campers. Give me a plot of flat ground though. Like my free-hanging friends I appreciate a couple of appropriately spaced trees, too. That’s so I can string up a tarp. 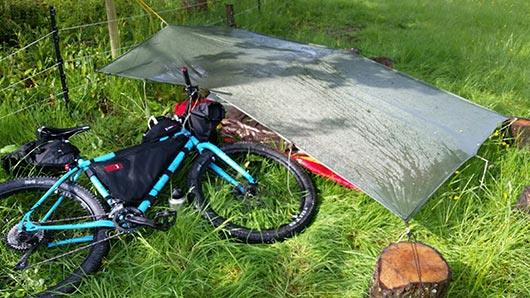 The tarp is an amazingly versatile piece of kit. It’s adaptability to various methods of pitching are unparalleled. Beyond its use as a primary shelter a tarp can be a ground cloth, a sun shade, a windscreen, or function as rain gear. It can be pulled out and set up within minutes making it a valuable thing to have for a rainy-day lunch stop. Finally, most tarps are relatively light and don’t require poles. One can always fashion those on-the-fly if needed.

Aside from getting outside and doing, the bulk of what I know about camping has come from reading books. Many decades ago I tucked into a series of tomes by Cliff Jacobson who has written books like “Canoeing and Camping: Beyond the Basics.” During my stint with a canoe manufacturer I had the good fortune to paddle and camp with Cliff. To say he’s one of my outdoors mentors is a fair assessment.

Through his writing Cliff introduced me to tarps. More or less. He certainly led me down the path of how to use tarps effectively. And he provided the seminal moment when I decided I wanted to get good at integrating tarps into my regular camping routine.

A large group of us were camped along the Namekagon River in northern Wisconsin. It was raining, so a couple of folks had pitched a large tarp over our dining area. The pitch was subpar, however. When the storm intensified the large square of fabric alternately sagged and billowed dousing us with rainwater. It wasn’t cold though. Plus, we had rain gear and plenty of beer so the crowd was somewhat oblivious. We could make do.

Cliff wasn’t having it. He charged into the crowd and got to work. He moved and re-tensioned anchor lines. He pulled additional lines vertically over tree branches to create a peak in the tarp. Within 15 minutes he had transformed a 20x20 feet piece of nylon from a wet flap into a taut roof. Rather than getting wetter by the minute we began to dry out under the shelter.

Now, I had spent plenty of nights in the woods by that point. Some of those were wet and occasionally bordered on mildly miserable. I did a lot of backpacking in the Appalachian Mountains back then. I had built up considerable fortitude in the rain, consigning myself to either being tent bound or splashing around in soaked rain gear. Humans are resilient animals for sure. But why endure discomfort when a simple piece of gear can provide additional shelter for cooking, packing gear, or simply hanging out?

I bought the tarp Cliff recommended – a 10x10 feet Tundra Tarp from Cooke Custom Sewing. They are made in Minnesota and equipped with features that put other tarps to shame. They provide anchor points along all edges as well as in the middle of the tarp. Pitching options are literally endless. I’ve used this tarp a lot. It will comfortably accommodate two people and it’s the perfect size to cover a picnic table. I’ve had no complaints whatsoever. I had been on the hunt for something smaller though.

When plans solidified to attend the Dorset Gravel Dash I thought a compact tarp set-up would be ideal since it would save weight and bulk while providing optimum adaptability for whatever the weather conditions might be. Some web searching led me to a small manufacturer called Etowah Outfitters.

Etowah had options aplenty. I settled on their “Bushcraft Special” 5.5x9 feet tarp. The price was almost too good to be true. I had questions. Their contact form listed a phone number. I called and was greeted by a live human voice. It turned out to be the owner, Paul. We chatted tarps and gear for at least 20 minutes. I explained my upcoming UK trip and confessed I had waited until the last minute to order new stuff. He assured me it would be no problem. Three days later I had a new 50F down sleeping bag and a tarp at my front door. Paul is a really nice guy. His gear is fairly priced and well made. You should check it out.

This new Etowah Outfitters tarp doesn’t have all the bells and whistles that the Cooke Custom has. But I chose the budget option because I was impressed with what it does offer. It’s not the lightest material out there but it is a high quality, dark green ripstop nylon. It features fabric loops around the edges rather than scantly placed grommets. It is just the right size for a solo shelter that could accommodate two in a pinch. It kept me bone dry in Dorset. On a recent Thursday night excursion I had the chance to test its weather worthiness again. 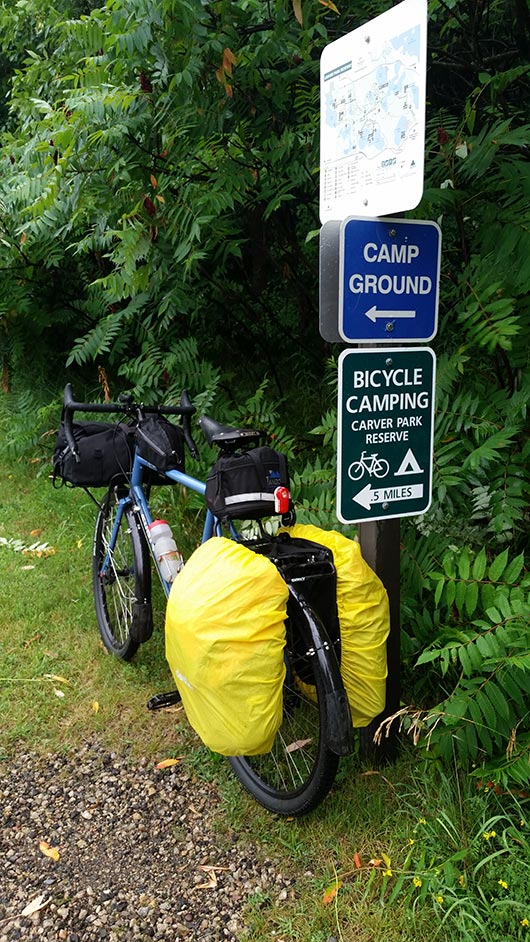 Let’s talk a bit more about sleeping gear. Much like dry clothes and hot food, sleeping in comfort is the sort of thing I tend to meditate upon when I’m pedaling through a steady rain toward my campsite for the night.

Sleep is an important ingredient in one’s day. It’s perhaps even more vital when you’re transporting yourself and your gear under your own power because the body needs quality downtime to repair and rejuvenate for the next day’s travels. Maximizing comfort during your overnight slumber should be a priority. Staying dry is only one piece of the equation. Following are a few more:

Sleeping Pad – Last year I splurged on a new Therm-a-Rest EvoLite camp mattress. I had been using self-inflating pads I acquired 25 years ago. I believed I was splurging since those pads still work aside from a slow air leak here or there. Things have gotten lighter, more compact, and more comfortable in the past couple of decades. I would not have believed you had you told me that investment would exponentially increase the quality of my camp sleep. I was blown away. Don’t skimp on a sleeping pad. It’s literally the foundation of your rest. Total packed weight = 1.18lbs/535g 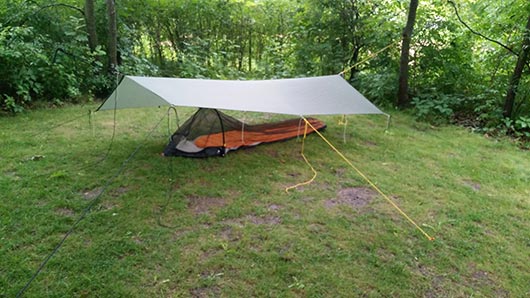 Sleeping Bag – There is a lot of subjectivity depending on where you live and when you venture outdoors. During the summer months you may not need a bag at all. In the northern climes of Surlyville our summer nights can get pleasantly cool. A 50F rectangular bag had long been on my list of gear. I’ve successfully, and comfortably, passed summer nights covered in an old army poncho liner or a thin wool blanket. But in terms of light weight and compact size it’s hard to beat a 50F down filled sleeping bag. Down regulates temperature well and it lasts a long time when properly cared for. Plus, it makes a great liner inside my larger mummy bag to extend its temperature range. Total packed weight = 1.27lbs/576g 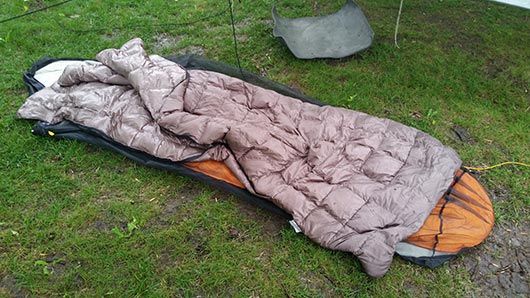 Bug Protection – Sometimes you need it, sometimes you don’t. I relish bug-free spring and fall camping where a tarp and a bedroll are all I need. In the summer, however, I carry a lightweight bug bivy. The screened enclosure is large enough to roll over while sleeping. The single hoop pole creates a space to crawl in and allows me to hold a book overhead for bedtime reading. Total packed weight = .73lb/331g

Pillow – Seriously, a pillow? Yes, seriously. More accurately something that can be converted into a decent pillow. I use a polyester fleece pillow sack. It was made a long time ago by a company that is no longer around. (Half of the sack boasts a gaudy print that proves it’s a relic of the ‘90s polar fleece craze.) It wouldn’t be very difficult to make your own. This sack holds my spare clothing while traveling. Once camp is set I change out of my day clothing, then stuff random stuff sacks, rain jacket, and extra clothing in the fleece sack to create a surprisingly comfortable pillow. Even if my day clothes are a little damp they go in, too, so my body heat will dry them overnight. Total empty weight = .2lb/91g

Tarp Shelter – I’ve outlined many reasons why a tarp is worthy of consideration. I haven’t yet talked about the weight savings over a tent. A lightweight tarp will contribute only one-quarter to one-half the weight of a small tent. There are no poles to break or lose. And the tarp is a multi-use piece of gear. Total weight Etowah Bushcraft tarp only = 1.2lbs/544g; with stake/cord kit = 1.87lbs/848g (Note: My cord kit contains generous lengths of 550 paracord and six aluminum stakes. Lighter options are certainly available.) 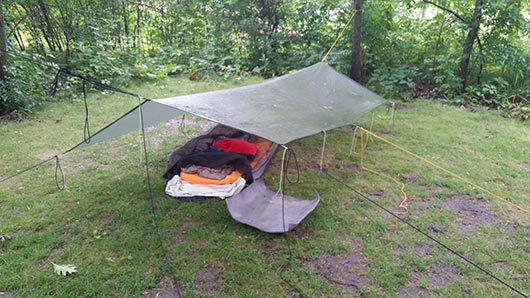 Although it rained steadily throughout the dark morning hours I stayed perfectly dry. I also stayed cool since unlike a tent my tarp afforded generous airflow through my mesh bug bivy. Never underestimate the weight penalty of wet gear, by the way. I weighed my wet tarp when I got home to discover it had taken on more than 50% of its dry weight (from 1.2 to 1.77lbs). If I’d used a tent I would also have had a wet tent floor in addition to the fly. While the bottom of my bug bivy was damp from the wet ground where I pitched it the wide overhang of my tarp kept it otherwise dry.

While we’re briefly on the topic of tents there’s a lot you can do to improve the weather worthiness of your pitch. I highly recommend you consult Cliff Jacobson on the topic. Here’s a hint: The handful of stakes and cords that came stock with your tent won’t cover the bases when the weather truly goes south. The skills developed mucking about with tarps lend themselves to battening down the rest of your camp as well. 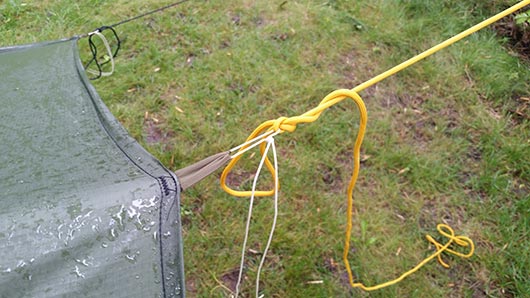 Hold on … we’re “knot” done yet! Master the Trucker’s Hitch and the world is yours to secure. This knot changed my life! I’m not kidding in the least. In fact, I already knew I was going to write that before I discovered this song and music video exist. Consider it a little bonus for reading this blog. You’re welcome?