The Art of the Bivouac

No tent. No fire. No trace.

Traveling light can mean simply carrying less stuff. But it also speaks to a state of mind. After all, literally going without is different than improvising or crafting something as needed along the way.

Now, I’ll confess. I like gear. And I fully admit it’s far too easy to fill one’s bags with gear when it’s at your disposal. That doesn’t mean you should always give in to the temptation, however.

Many years ago, I got into backpacking. At the time, gear was still old school, i.e. heavy. To save weight you had to make sacrifices. During that time, I learned a couple of maxims that have remained my ultimate criteria when gauging trip packing efficiency and success:

I’ve never achieved 100% compliance to these criteria. However, the pursuit of them has helped me make smart decisions about paring down gear when I’ve needed to. Side benefit – there is a certain adaptability that develops when one chooses to eschew gear designed to serve a single purpose, or to do without certain gear altogether.

There are plenty of good ways to practice and build these skills. Simply getting out and camping more is a good one. Day trips are also nice. The sub-24-hour overnighter can be ideal. But it’s still “camping” and camping to me conjures an image of packing a subset of shelter and cooking gear. What if there was a way to take it down another notch in terms of amount of gear carried?

Enter the bivouac, or “bivy” for short. Strictly defined a bivouac is “a usually temporary encampment under little or no shelter.” The military and mountaineers use this term for moving efficiently in an unencumbered way. (A bivy sack is often called a “bivy” for short, so don’t be confused. We’re not talking about that here. A bivy sack is a specialized piece of gear that you don’t need to successfully bivouac.)

I’m talking about building skills to travel light, stop briefly, and move along expeditiously. It doesn’t really matter where. It could be on an alpine peak or in the urban jungle.

“Hey, are you talking about sleeping in a park?” Not necessarily. A good bivy can be pulled off just about anywhere. Granted, it’s not for everyone. But, if you spend chunks of time in the outdoors you know things don’t always go as planned.

Occasionally, one finds oneself in a situation that not only wasn’t planned but where better judgment says to hunker down and get some rest for a few hours instead of trying to press on. Practicing bivouac skills voluntarily from time to time means you’ll be better prepared mentally and physically to embrace it when it isn’t an option.

Let me give you a practical example. (Names have been withheld to protect the guilty.)

At Eurobike a couple of years ago I got locked out of our second-story rental apartment when I returned later from dinner than my co-worker. He said he’d leave the door unlocked. It wasn’t. Culpability is still a subject of debate.

Now our hosts, the owners of the property, lived downstairs. It was quite late and one of them suffered from serious health issues. I didn’t want to disturb them or the entire neighborhood. I dialed my cell over and over in an attempt to awaken my co-worker. No dice. I settled into the reality that I’d have to get at least a few hours of sleep, and that I’d be sleeping outside.

Besides my bike tool kit, I carry a secondary kit on my bike at all times. Contents are basic but cover at minimum the means to make fire and stay warm. Temps were in the 50F range and the night was damp. I donned my spare outer layer, removed my shoes, and slipped into the plastic cocoon of my emergency space blanket.

When my co-worker found me four hours later, I was sleeping so soundly he had to shake my shoulder several times to wake me. (I recall dreaming of hefeweizen.) It wasn’t the best night’s sleep I’ve ever had. All things considered, though, it was better than not sleeping at all.

Here’s an example of the kit I’m talking about. It’s all neatly contained in a Surly Tool Bag with room to spare should I decide to add more stuff: 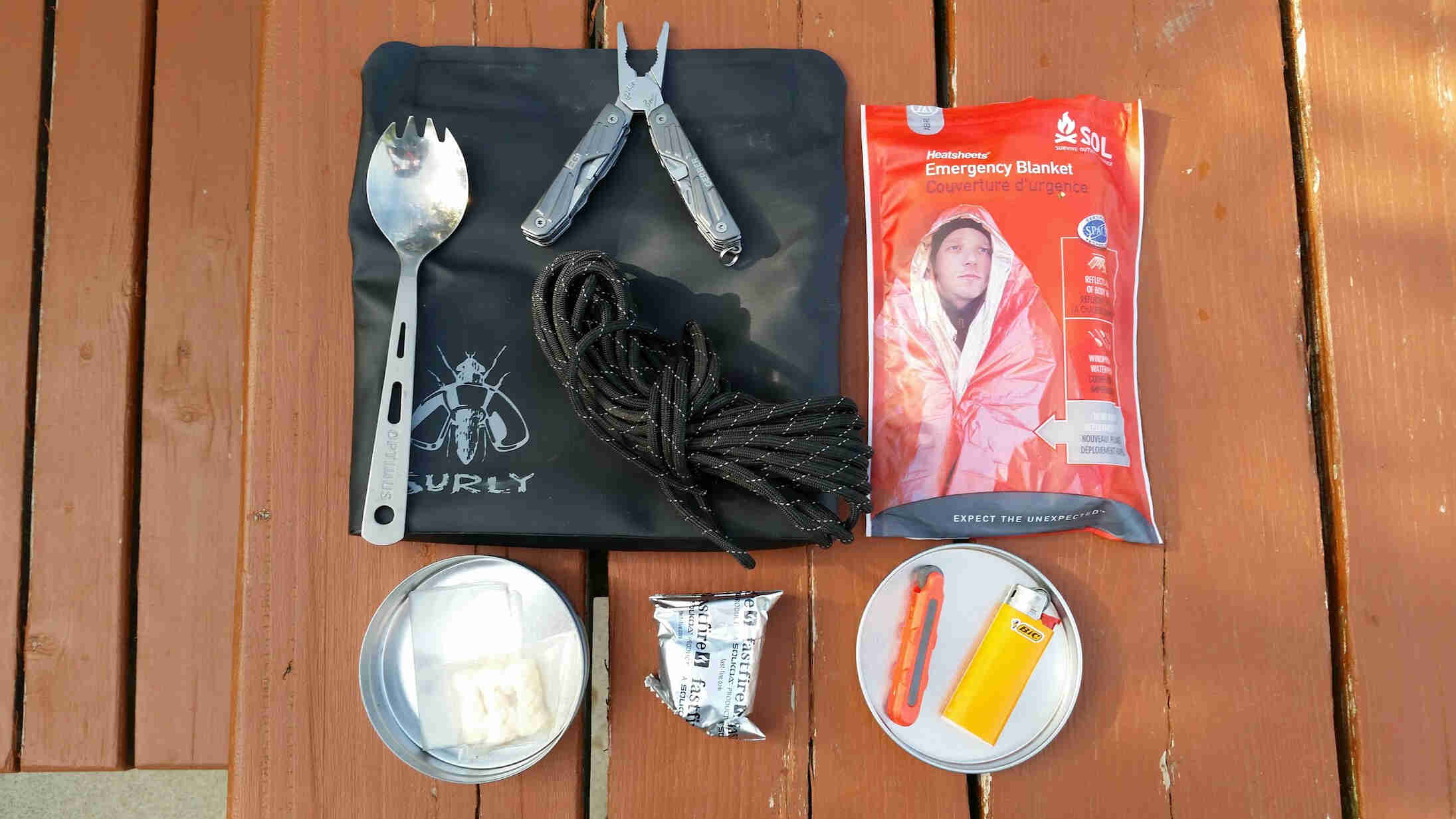 Contents include: A couple of fire starting methods, some tinder, space blanket, small multi-tool, 25ft of paracord, and a spork.

More recently I had one of those nights when I couldn’t get back to sleep. It was a clear evening with a beautiful full moon. The energy was high. I considered my options. It made sense to get an early start on my commute to work. Okay, more like a six-hour head start. I gathered a few supplies, stuffed them into the Porteur House bag on my Disc Trucker, left a note for the family, and slipped into the cool darkness.

An hour later, after a supremely peaceful pedal, I pulled into a spot at a local park. It had been a while since I’d slept on a picnic table. I cracked a can of Wisconsin champagne and listened to the night sounds. It took less than five minutes to situate gear and roll out my “bed” consisting mainly of a tarp and a folded wool vest for a pillow. It just so happens that I use an old scrap of foam to line the inside of my Porteur House bag. I removed that for some padding beneath my shoulders and head.

Picnic tables aren’t as comfy as one might fantasize them to be. Still, I draped my tarp over my body and enjoyed a series of short naps for a couple of hours. When the sun had fully dissolved the darkness the footfalls of early morning joggers sounded with increased frequency. It was time to get moving. Oh well, that table wasn’t getting any softer anyway. 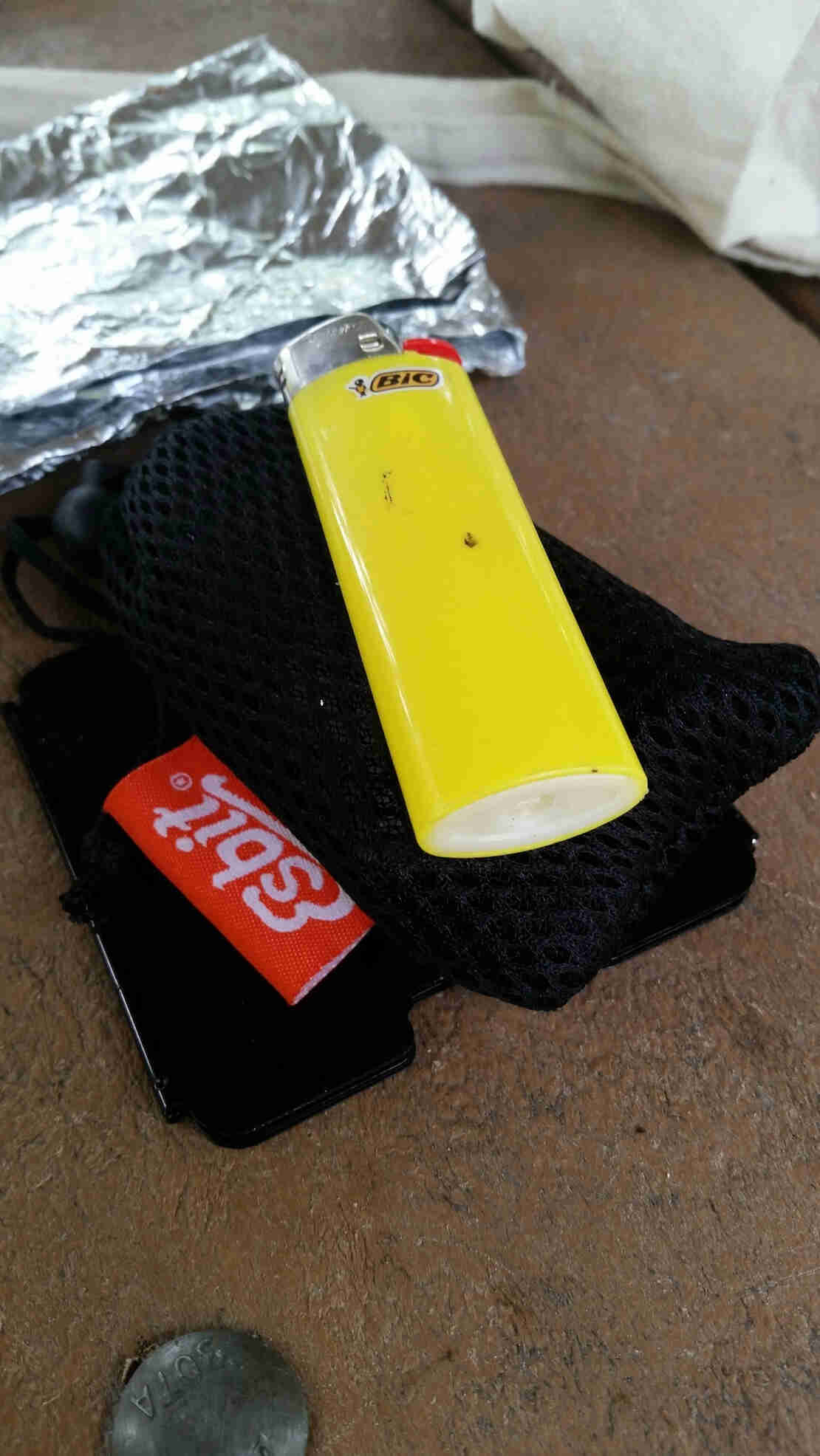 I made some tea using an Esbit tablet stove. It’s difficult to call a stove this small and lightweight an extravagance. Even when you’re traveling light having a hot beverage is a tonic for the psyche. Plus, fuel tabs double as fire starters in adverse weather. 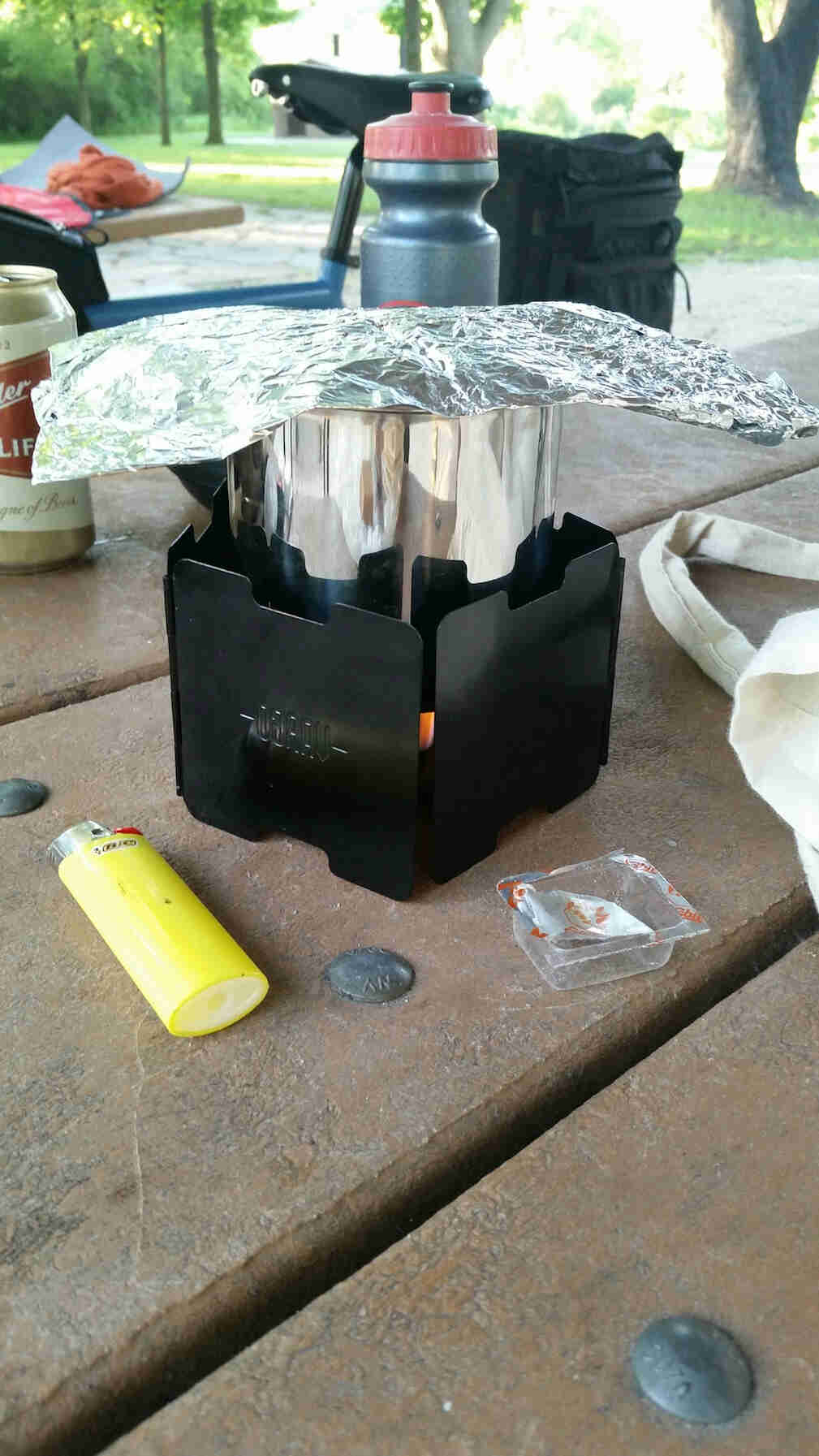 To accompany my tea, I packed a simple breakfast of cheese and crackers. 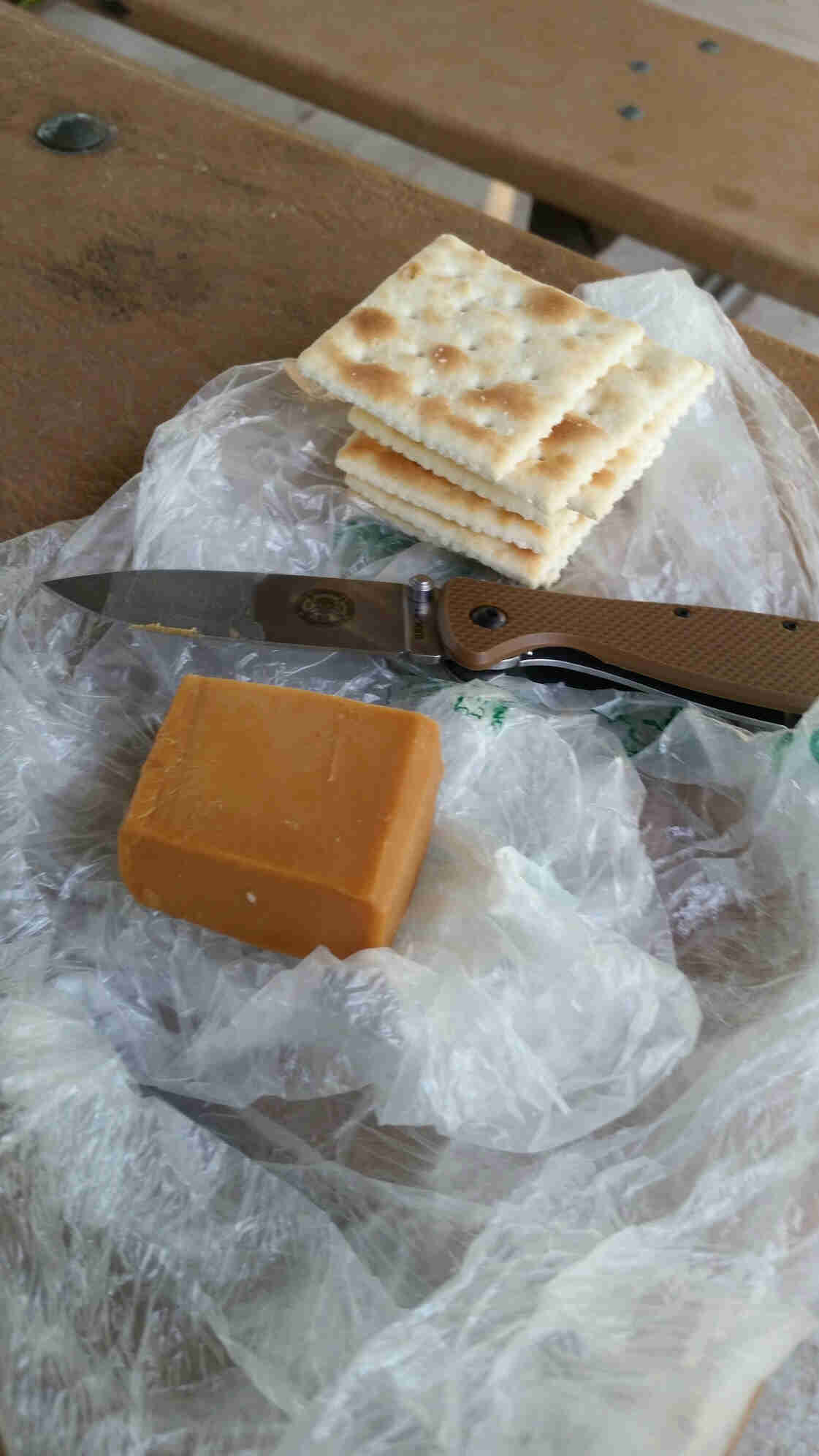 Here is a shot of my bedroll before it was packed away. 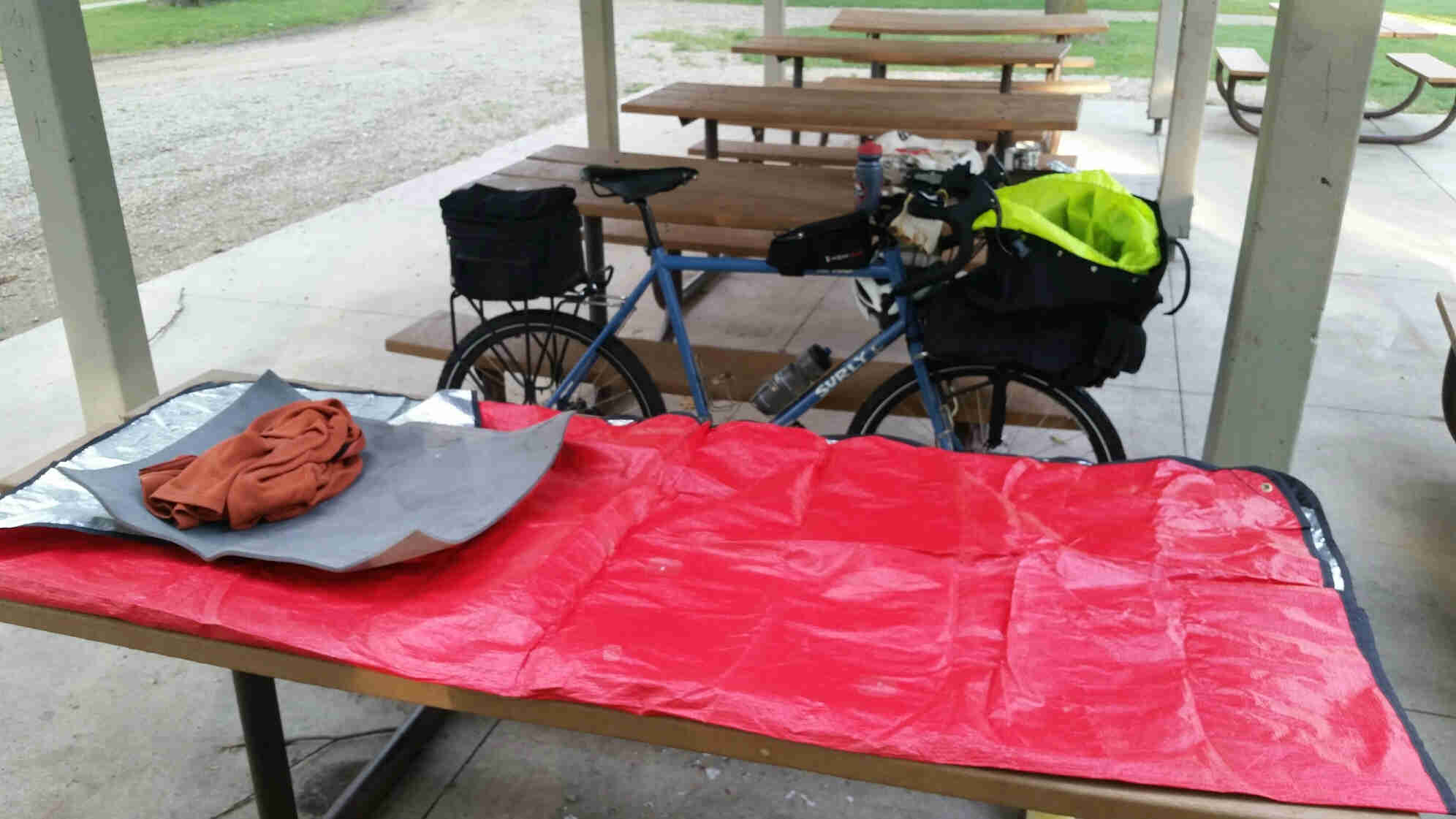 This tarp is one of my favorite pieces of gear because it meets both of the gear packing criteria outlined above – it’s used on every trip and serves many purposes. It has a hood and hand pockets in three of its corners, so it doubles as a poncho. It’s made of durable, waterproof material that stands up to rigorous use. It’s an effective sleeping layer for quick bivouacs in mild weather. It functions as my ground cloth year-round when solo camping with a shelter. In cold weather, it’s an excellent windbreak and heat reflector. Simply drape it over the body with the reflective (silver) side in and stand facing a fire. Its reflective properties will warm you to the bones on the bitterest of days. Finally, the corners have brass grommets allowing it to be rigged for shelter using the paracord in my kit.

Striking camp took no more than ten minutes. Precisely because it wasn’t a camp at all. A bivouac frees you from the burden of not only a tent but also more extensive cooking gear and other accessories. Those are the gear items that typically take the most time to clean and pack, after all.

The minimalist bivy set-up and the improvisation it invites are a pleasant way to change up a full-on camping gear routine. It’s always rewarding to find ways to substitute knowledge and skills for additional gear.

Because you never know when you’ll have to make do without.