Scotland, Fatbikes, Beer, Whiskey and the Skip and Gern Show

Sov and I are in a massive van, being piloted by a Brit named Pat on our way to a hotel outside of London near Heathrow Airport.  We’re driving away from Single Speed UK, in Swanage, which is on the Dorsett coast of the United Kingdom.  We’ve been here 12 days and it’s been pretty awesome from start to finish.  Last week we landed in Edinburgh (neither of us having slept at all on the trip over) on Saturday morning around 8:30, put our bikes together and road fatbikes with about 40 people on the rocky eastern beaches of Scotland.  The event was called Forth Fat, and this year it was arranged by a guy named Bruce (also known as the Coast Kid) and it was a blast.

Here is where you can find Coast Kid's account of the weekend. He was either way less drunk than I was to remember so much, or maybe he just pulls it off better.

Here is a shot of my pug all loaded up with my camping shit.  I used the sleeping bag as packing material to save a bit of room. 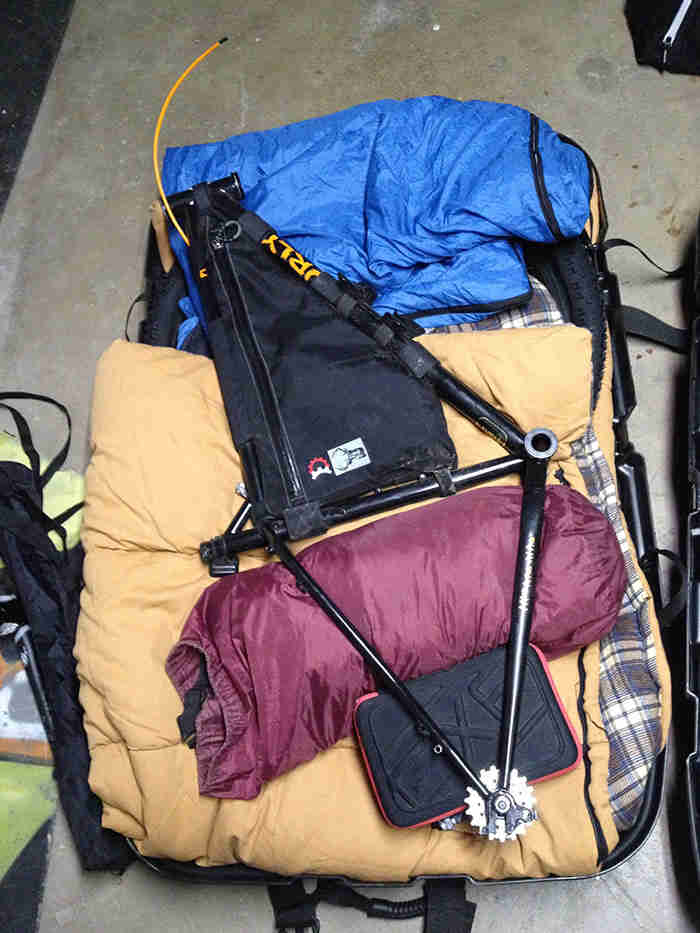 When I first heard about going on a two-day beach ride up in Scotland on fatbikes, I was excited, but also a bit pensive.  I’ve done some beach riding before and while it’s fun, it’s not necessarily how I would spend two days.  Slowly pedaling across the sand over and over moving slowly and watching the ocean tick by. That’s not really how it was at all though.  There was a fair amount of sand, but there were an impressive amount of rocks.  The idea was that we were riding while the tide was low, so we could really traverse the tidal rocks and take in some truly breath taking sights.  The first big stop was at this spot, with corroded submarines left on the coast from World War II. (This was actually where we met them for the first time)  From there it was rocks and some pretty impressive single track.  I road my Pugsely set up 1x10 and it was pretty perfect. 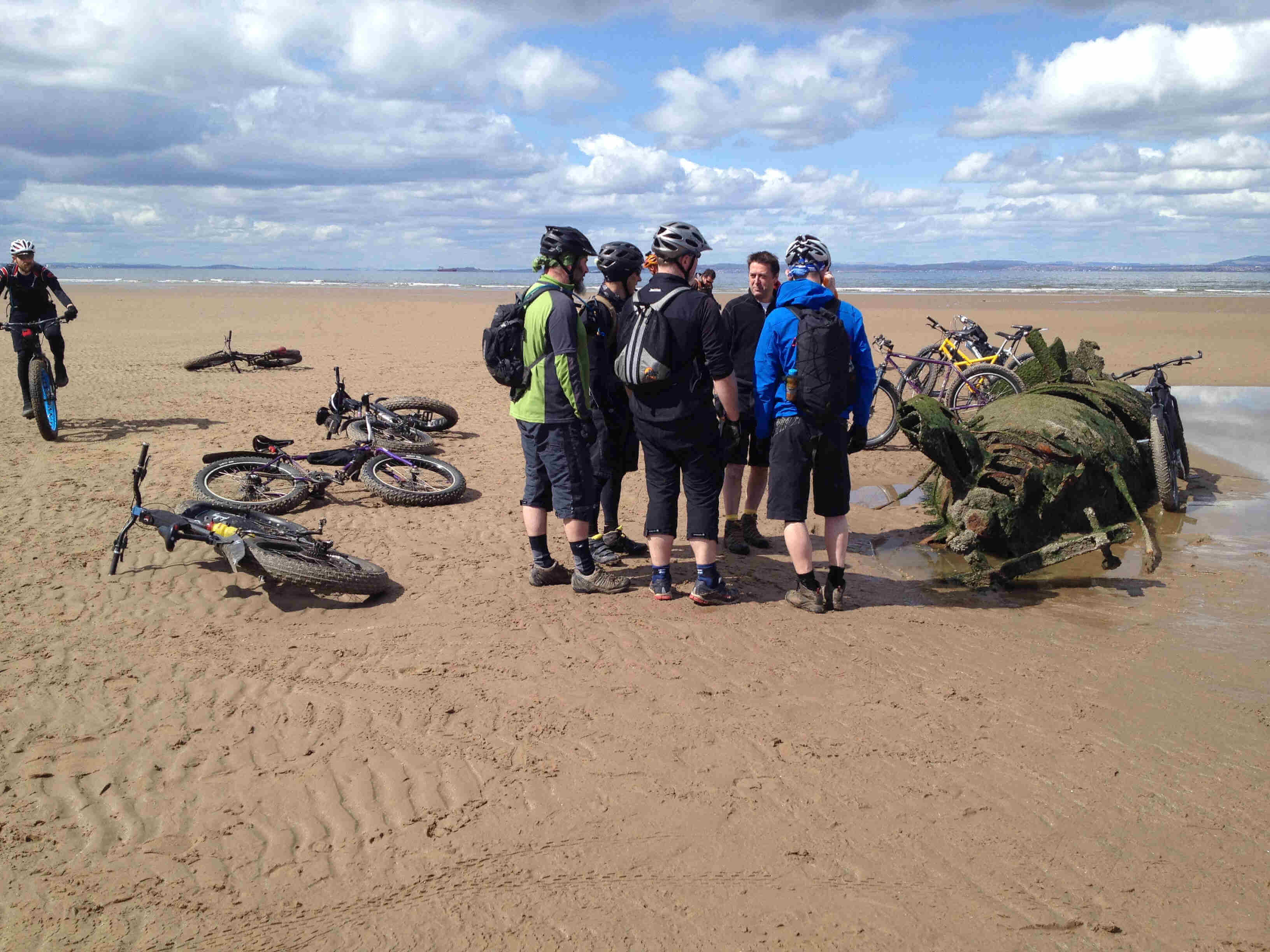 The 40 of us were a pretty impressive site to see.  Riding along all on fatbikes (except for a couple of Krampus, and one brave soul on a Karate Monkey).  I certainly have never ridden with so many other fatbikes before, and I imagine from the outside we looked a bit like a freakish weirdoes pedaling bikes that look like they weigh a hundred pounds each.  On the inside of course we all thought we looked like a 50’s bike gang or possibly the cast of Happy Days (that would make Bruce the Fonz, me Potsey and Sov Ralph). 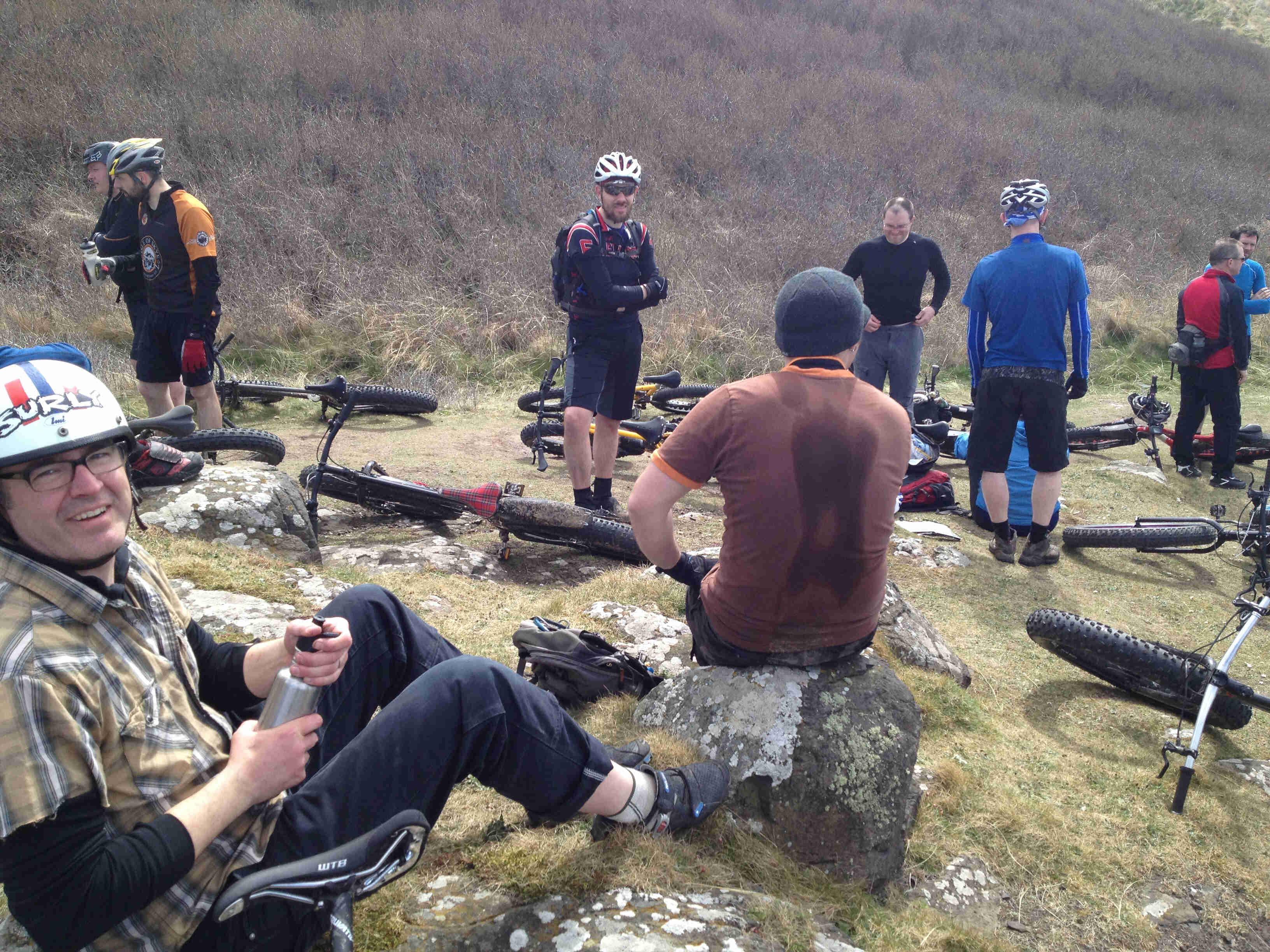 We road in the day and in the evening we drank lots of great local beer.  We also had our fair share of whiskey, as the locals wanted to show off all their flavors.

The people were fantastic: friendly, fun and very patient of Sov and I and our funny “accents”.  They were truly a remarkable bunch.  Many from the area, but some who’d traveled quite a long way to get there and ride with other fat converts. 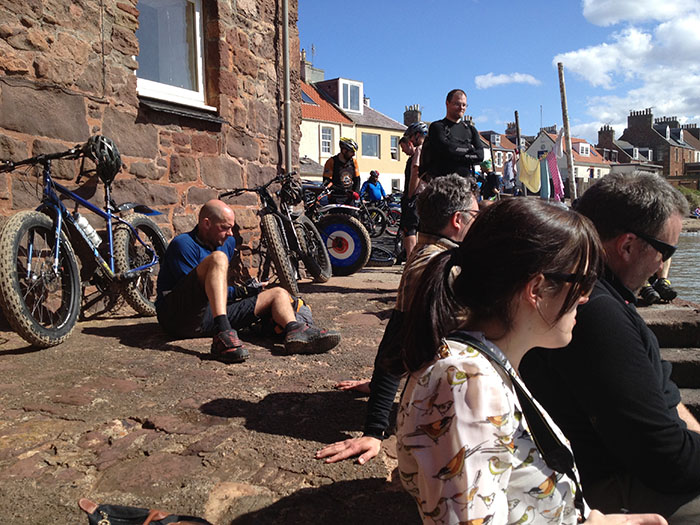 Much like in the States, the people there who ride those bikes have really taken to it, and many of them confessed that it’s the only bike they ride any more. They ride it in every season, and on every terrain, just like many of us do back home. 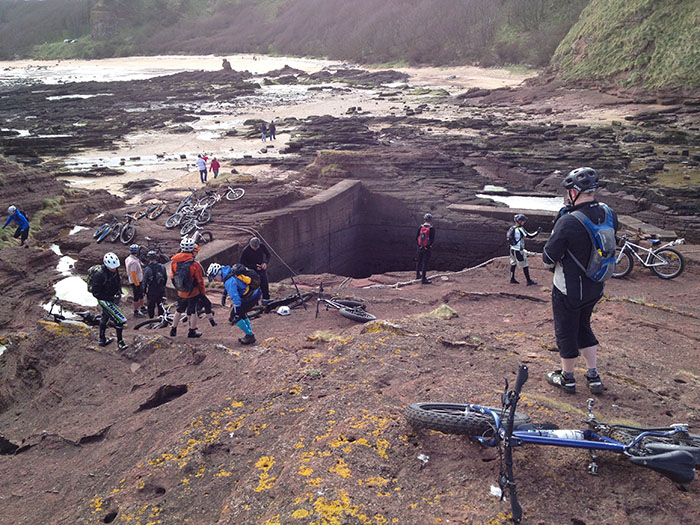 There were lots of other brands of fatbikes around, of course the Surly’s made a good showing, but it’s nice to see other brands finally accepting it as a “legitimate” ride instead of a passing fad. 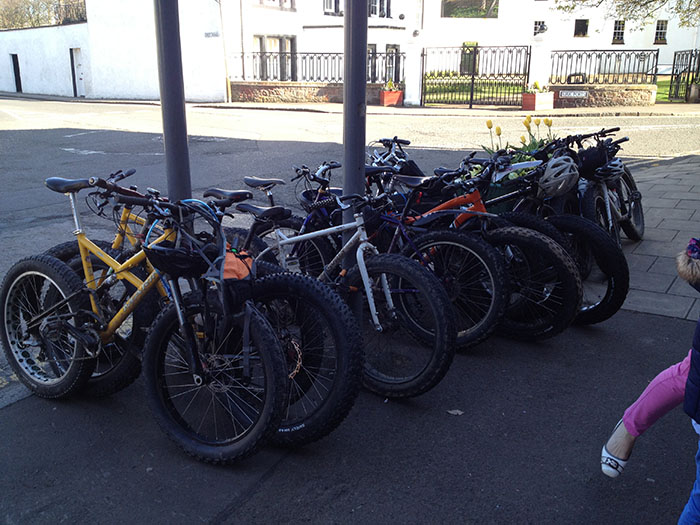 All in all it was some of the best riding I’ve done and the weekend was a roaring success. 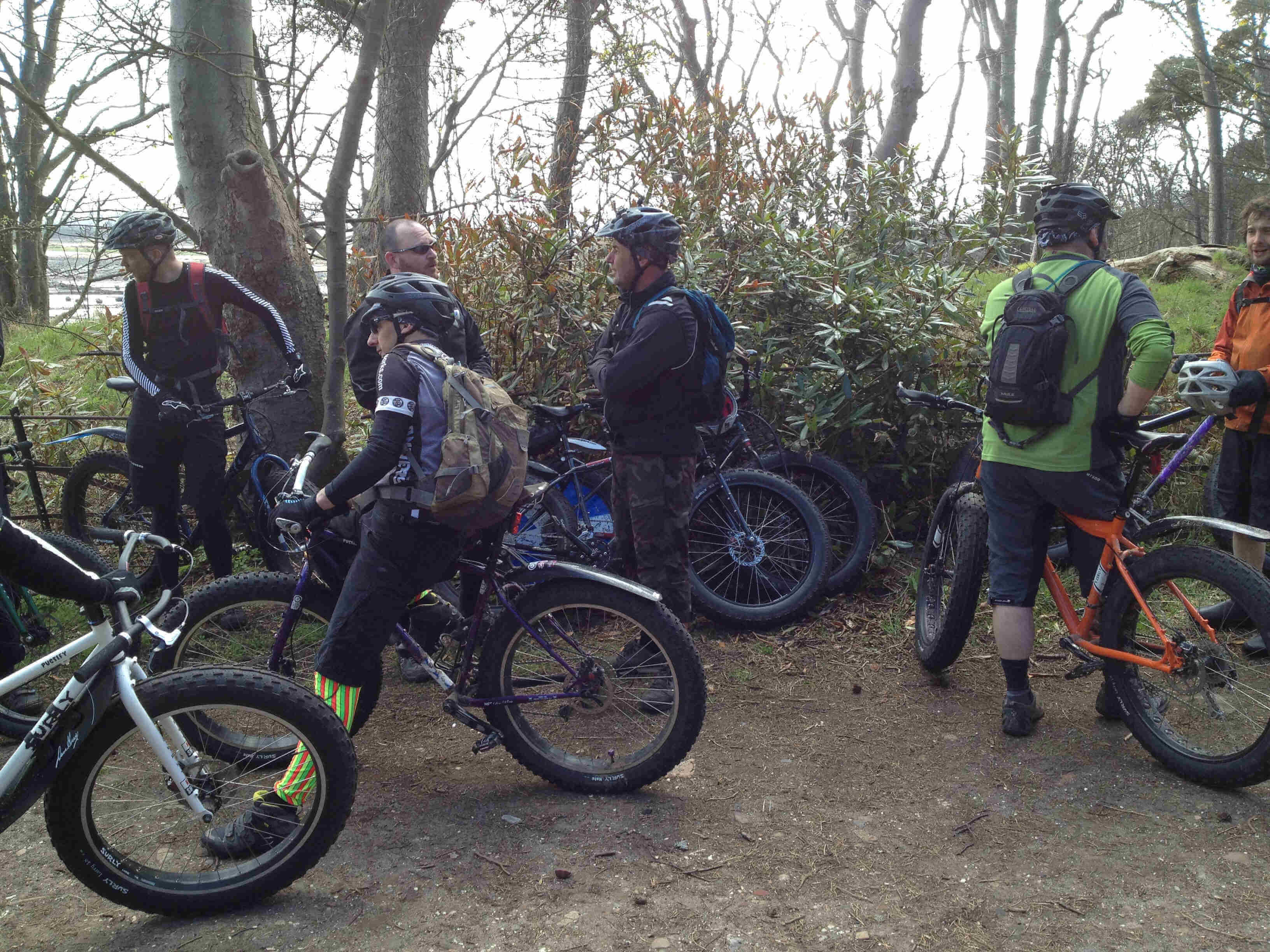 We spent the next week zig-zaging across the country visiting dealers and riding a tiny bit.  The next weekend we spent with Charlie the Bikemonger in Swanage at SSUK.  I won’t say much about that, cuz you’ll hear all about it from Sov.  I will say that I road the Pug with a set of offset Rabbit Holes, and we’ve even started carrying orange rim-strips so I could keep my Halloween theme going on the bike. It handled awesome on the trails. It's not like the Krampus, it's like something else all together.  Here are some pictures of it with the Rabbit Holes (with some clearancey shots for you nerds out there) 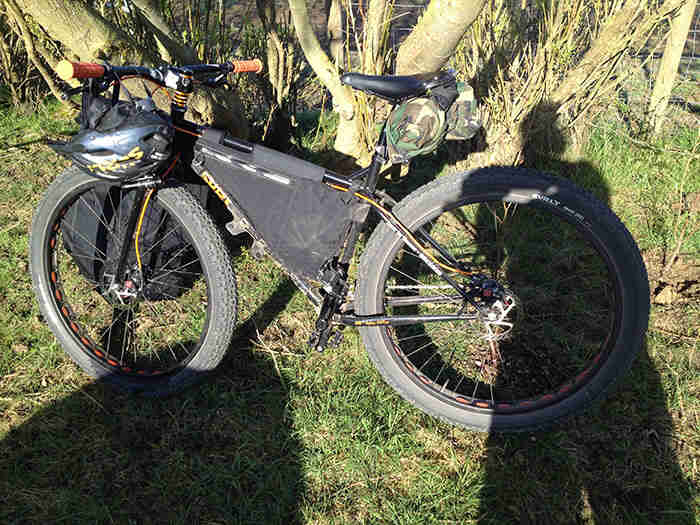 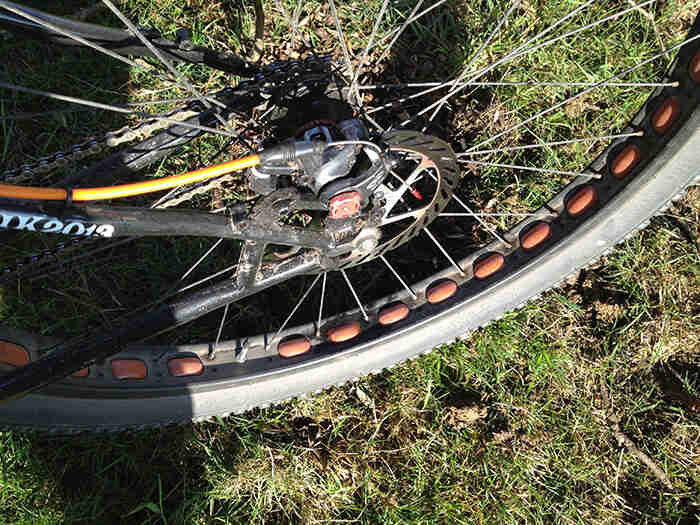 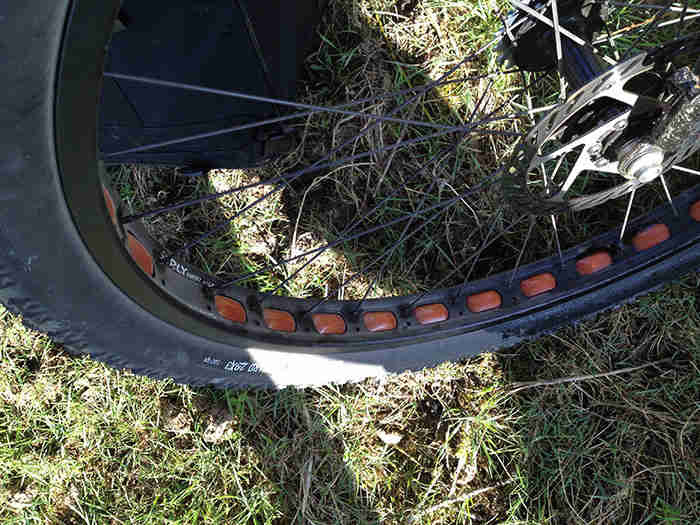 Notice those snappy orange rim strips. They are my favorite so far, but that's not surprising from a guy with a pumpkin bike. Here is that clearance shot I promised. 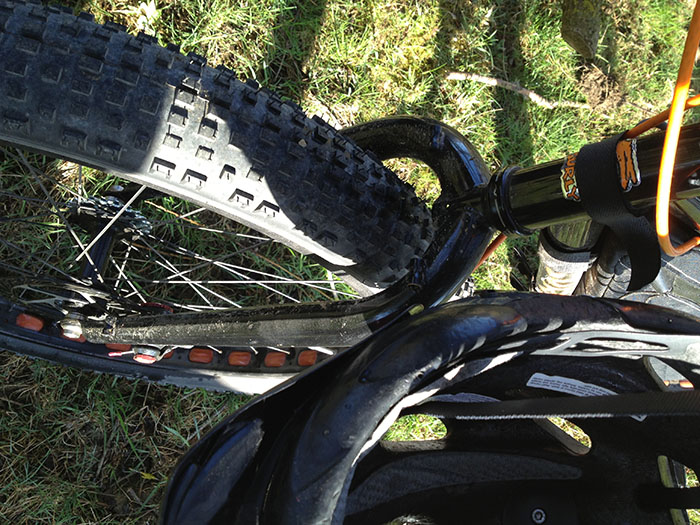 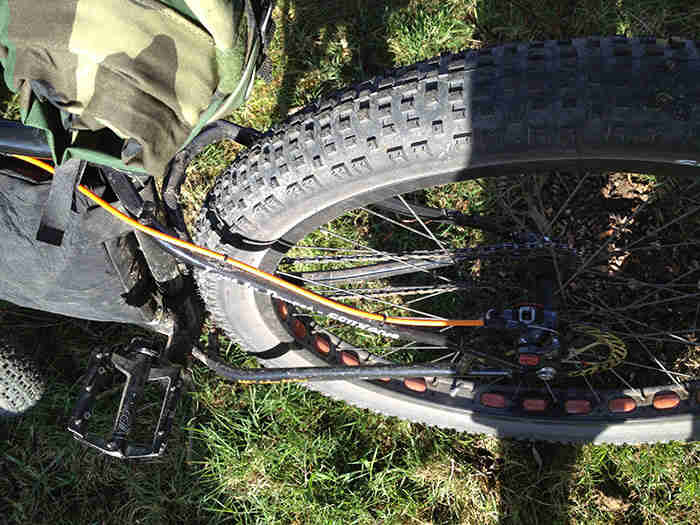 I road the Pug with Marge Lites and Knard 26x3.8s on the rocks and Sov road the beach on his Krampus and it worked pretty well for a trail bike.  He was much happier than the guy with the Karate Monkey, but couldn't traverse the really loose stuff as well as the fellas on Moonlanders. 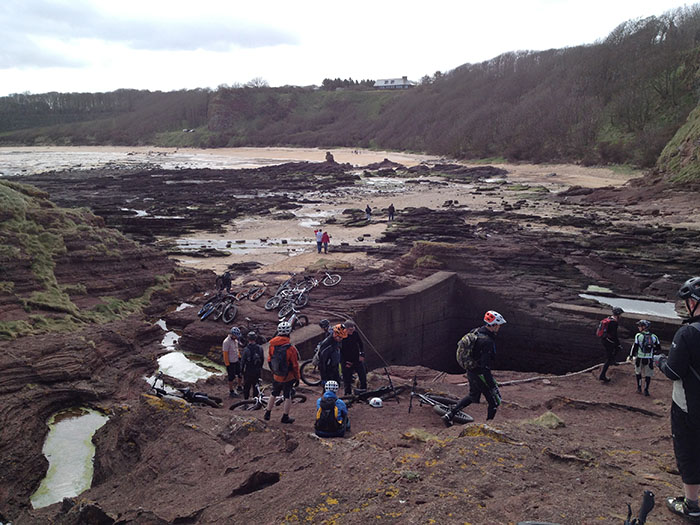 If you ever get a chance to ride the beaches in Scotland on a fatbike, I couldn’t recommend it enough.  But there’s no time like the present, so go ride.