Those of you paying attention may have noticed that we changed the name of the Black Ops Pugsley to Necromancer Pugsley.  This seems to have set the hens of the interweb forums a-clucking, so perhaps an explanation is in order.  First, a Top Five list of things that did not lead to the name change, potentially based on the aforementioned rumors:

The fact is this: J&B Importers have a line of BMX parts called Black Ops.  They were concerned about product overlap or something.  We, being a tower of jell-o, sent them a warning shot across the bow, then changed the name.  The bike industry is relatively small and relatively friendly, and believe it or not we’d like to keep it that way (relatively speaking).  In the words of that one guy who got beat up that one time, “can’t we all just get along?”  Well, no.  But why stop trying.  So that’s one part.

“O.k. then,” some of you are saying, “so why did you choose Necromancer?  Doesn’t that mean, you know, like, sexing up a corpse or something?”   No it does not.  You are thinking of necrophilia.  But it does reveal something about you that you went there.  Necromancy refers to a form a black magic which conjures the dead to gain insight into events hidden from mortal view.  Plus the bike is black, like all black.  There is no great underpinning of deep meaning.

This guy may have been a Necromancer, but would he have ridden one? 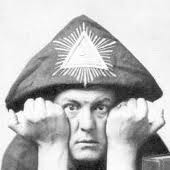 Don’t like it?  No sweat, we’ll just change it again.  After all, please remember people: it’s a bike, not a personal identity. Now quit your whining and go ride some bikes!