What We Did To Ireland/What Ireland Did To Us

Almost every year Surly sends a few of their workers to Single Speed World Championchips. We like events that are about the people, the atmoshere, and less about racing.  Plus the booze.  This year,of course, SSWC descended upon the Ballyhoura islands outside of Kilfinane Ireland, which has lots of atmosphere, good people, and also booze.  We sent our 'purchasing agent' Phil Raitt, our graphics lackey A.Wood, and one of customer service slam pieces, T$, to infiltrate the fun people, and this is the report they took their sweet time writing. 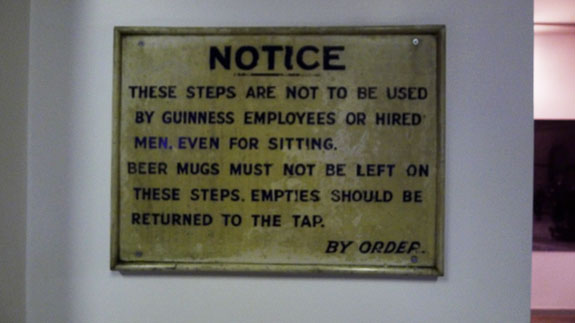 Phil: Several weeks back I was fortunate enough to cross the pond with T$, A-wood and our bikes to partake in the festivities that is SSWC and enjoy the splendors of history and scenery of Ireland.

Wood: Yeah, there was a lot of old stuff to look at. It sure was pretty.  I was the tallest person with the tallest bike in Ireland.

T$: Being ¾ “black Irish” descent myself, I found myself quite at home; Guinness for breakfast, lunch and dinner…Jameson for desert. My countrymen don’t judge. 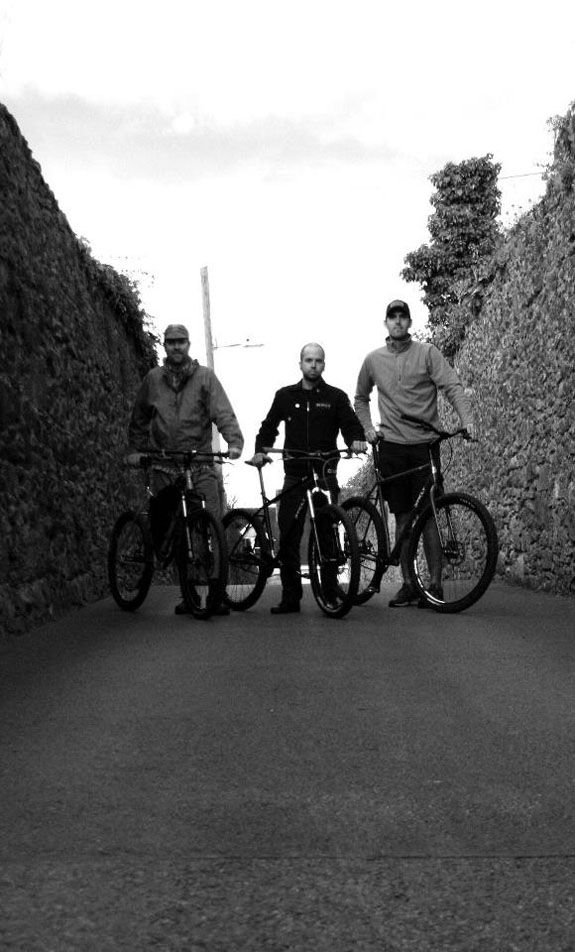 Phil: It was a rather drunk week.  The details are quite fuzzy.

Wood: I didn’t have to drink to have fun but I did anyway. I like Guinness. 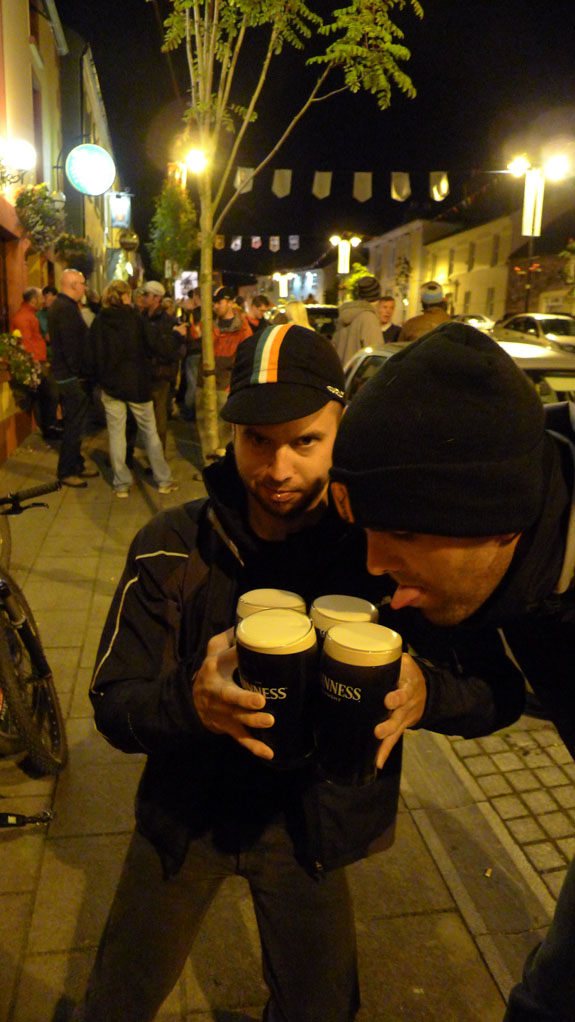 Phil: We were, however, in the place we were supposed to be to ensure that The Man paid the bill.

Wood: Indeed the right place to be.  We went to the Jameson distillery and thought about taking the walking tour but instead decided to take the tour in our tummies...the true Surly way. Jameson had a real full bodied aroma, initially sweet with ripe fruit notes of melon, bananas and dark fleshy plums. The unmistakable but still spicy character combines to give hints of treacle, cinnamon and liquorice.

T$: Lesson learned about costly guided tours: Spend all the money that you would have spent on the tour to sample the product. You will not remember those dates, names or fancy verbiage anyway but you will walk away a happier man. 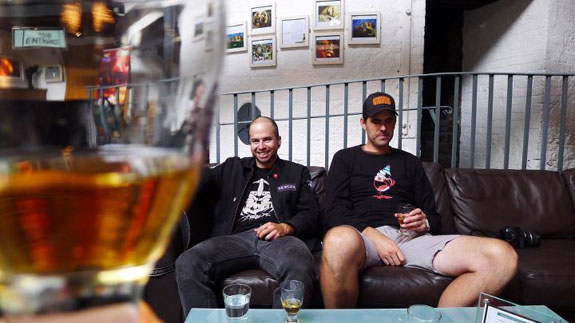 Phil: We travelled in luxury --a moving van we dubbed ‘the Mullet’.  Party in back!

Wood: Glad I didn’t have to sit back there with those short people.

T$: It was pitch black and the road was bumpy, I could scarcely find my lips with the can.  And Chewies feet…don’t get me started on Chewies feet… 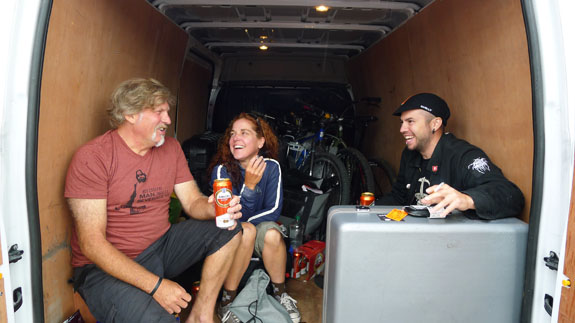 Wood: This was weird.

T$: A mute witch is nothing to be trifled with. 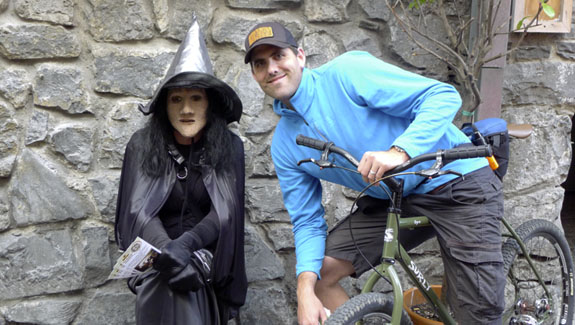 Wood: Ireland plays many sports that I never heard of.  Beer and bikes I know.

T$: And here I thought this sport was only played on the streets after the pubs closed! 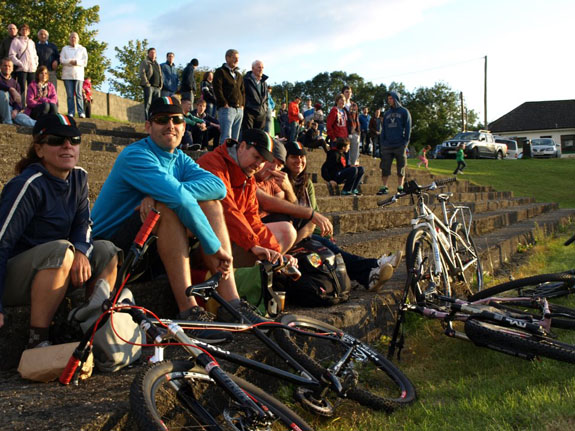 Wood: Lot’s of great castles. Can we go find something to eat?

T$: I’m not going to lie. The grim stone castle scenes and other ruinous medieval wastes had me quite excited. Too many lyrics from a thousand metal songs swam in my head. 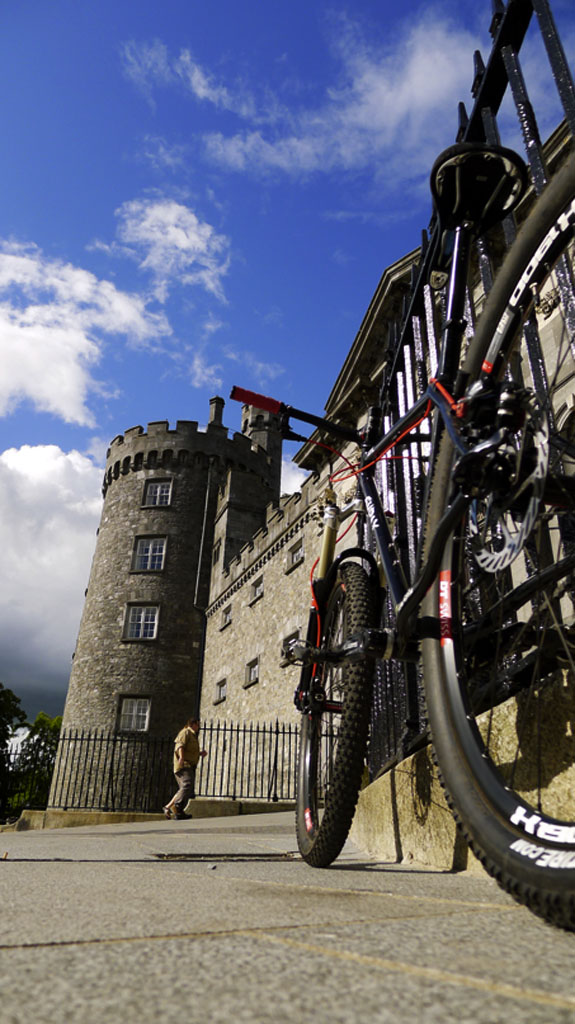 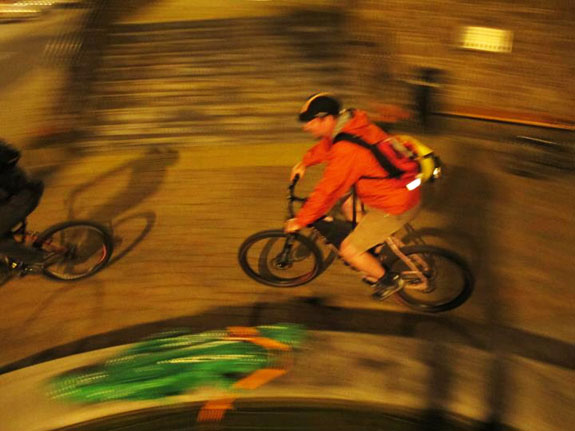 Phil: And eventually made our way to the SSWC events.  Thursday night was spent in Limerick where the Locke Bar was the sight of next year’s hosting competition.  South Africa was the winner. 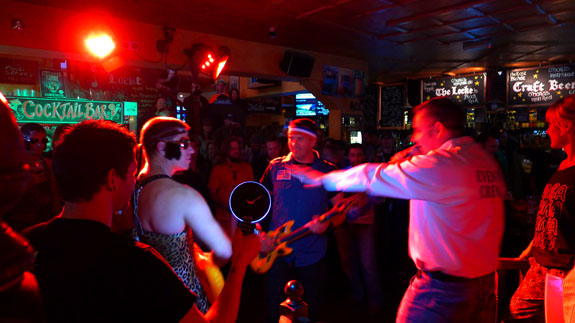 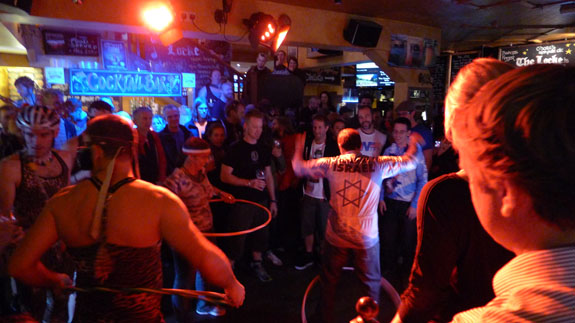 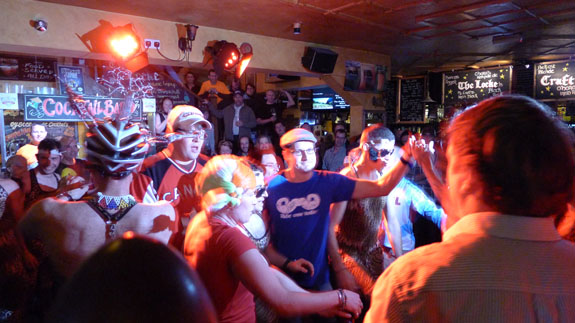 Phil: There was plenty of this…

Wood: I don’t remember this, I must have been in the men’s room or looking at handmade bikes outside.

T$: This spread was downed by 3 teams of two. Ladies on the guy’s shoulders drank the Jag shots, then dropped the Jamo shot into the Guinness pint that the male counterpart then had to drain…I think…Wait, I don’t remember this either. 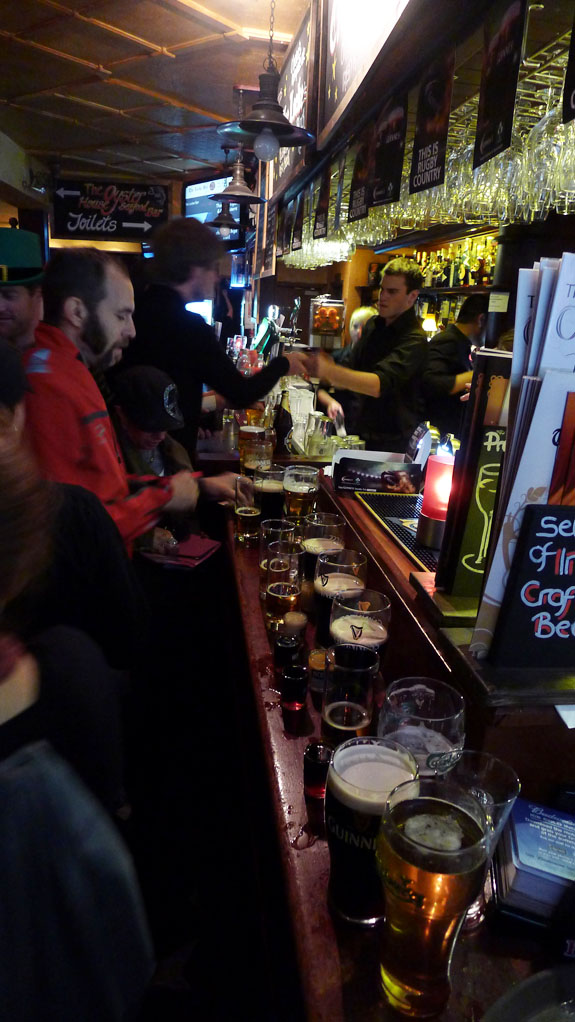 …which resulted in a rather slow start to Friday.  We finally rambled into the tiny village of Kilfinane.  Race Day started with a parade roll out through town. 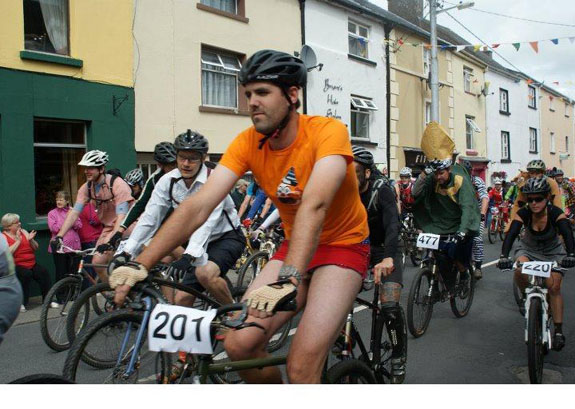 Phil: After 7-8km we made it to the start line where the pre-race nourishment consisted of donuts and beer

Wood: Um, don’t think about the outfit. I already have people stalking me. I have to say that donuts are an amazing pre-race food at least for the first lap.

T$: Just think about the poor freezing 8 year old school boy Andy stole that outfit from. Seriously dude, just because you’re a freakin’ walking redwood tree doesn’t mean you can just push people around like that. I can’t believe you stole his donut too. 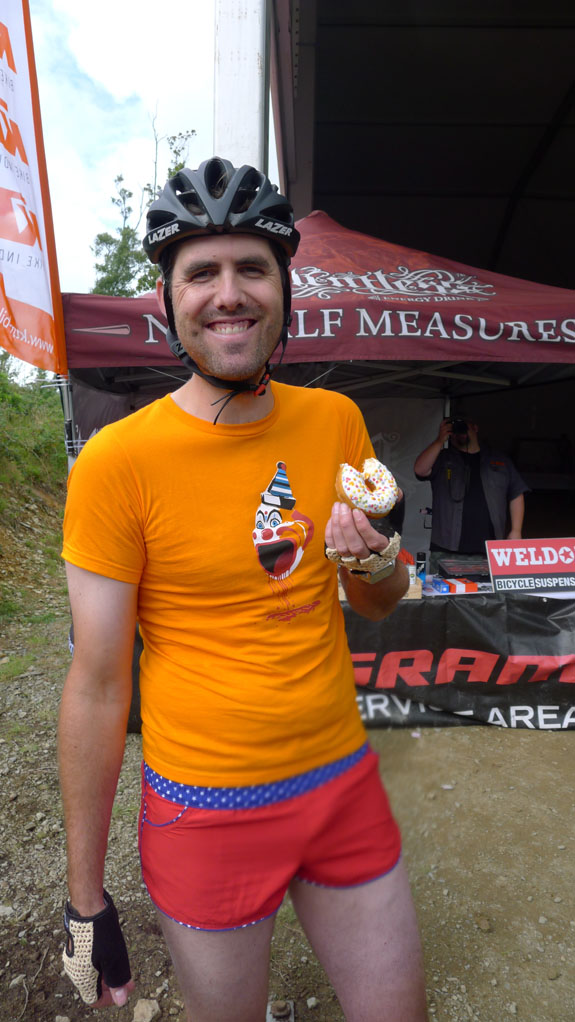 T$: Chewy and I are both in league with you know who \m/. The gent in the painted-on onesie seems to be in league with with his daugter’s ballet instuctor and the masked crime fighters behind him were having a lover’s quarrel if I remember correctly. 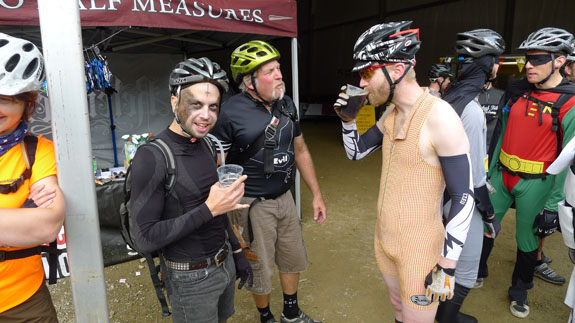 Phil: I gave up my shot at the tattoo and title somewhere around the 5k mark as this young leprechaun from the Netherlands and the little lady from the states required the services of ‘the Bishop’

Wood: Silly Phil. I guess this is what happens at the end of the pack. People fall in love and get married to leprechauns.

T$: I didn’t experience anything on the trail except white knuckled fury and the pain caused by my gear ratio that was intended for the flat Midwestern prairie lands. 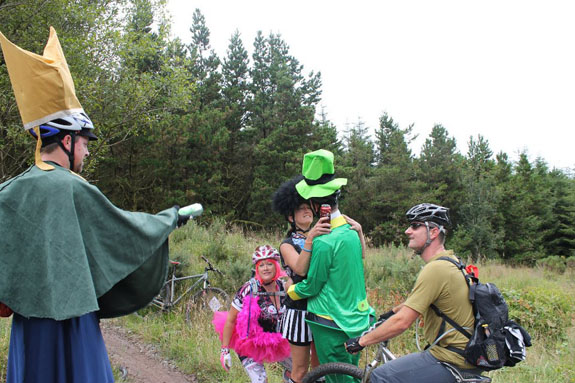 Phil: It was a happy occasion enjoyed by all but too soon it ended.

Wood: Yeah, it ended because it was cold as shit. 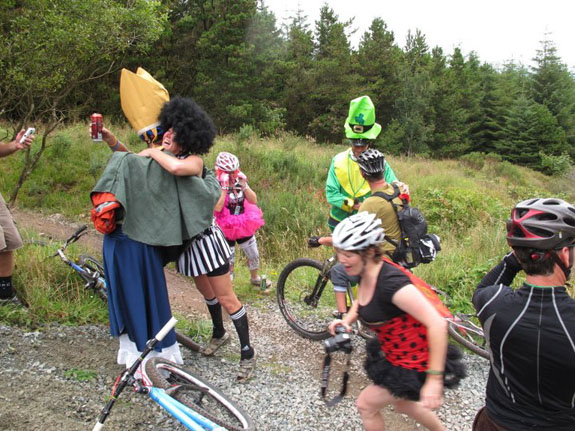 Phil: We made some new friends, reacquainted ourselves with some old,

Wood: These were all new friends to me. We are all best friends now. 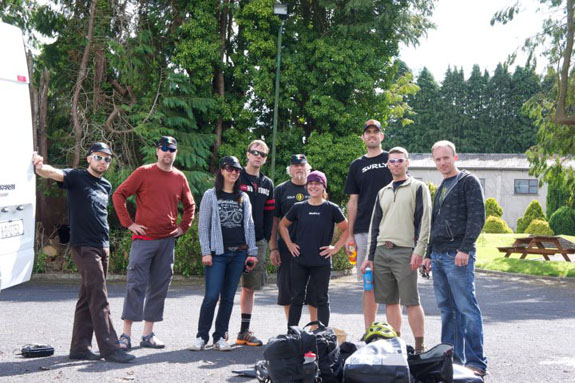 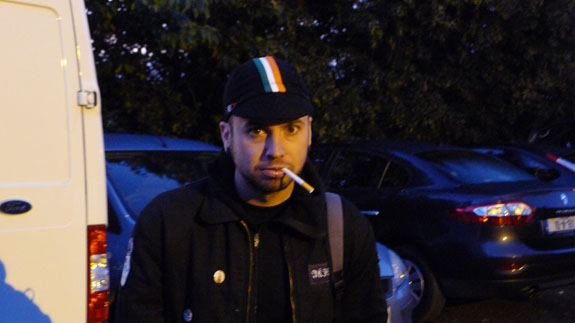 But we can’t wait to do it all again next in South Africa.

Before I sign off, I’d like to say extend our sincere thanks to the organizers.  We know that a lot of time and effort is put in to organizing these events.  To say thank you we like to offer a frame of choice to the top volunteer, chosen by the organizers.  With that said we would like to congratulate Andrea Sharpe.  From Canada. She came out to the event early to volunteer her time in whatever way she could simply because she likes SSWC and is a good person.  She rocked it. And she was super stoked to get a Surly.  Andrea, welcome to our dysfunctional family.  See?  Look how happy she is. 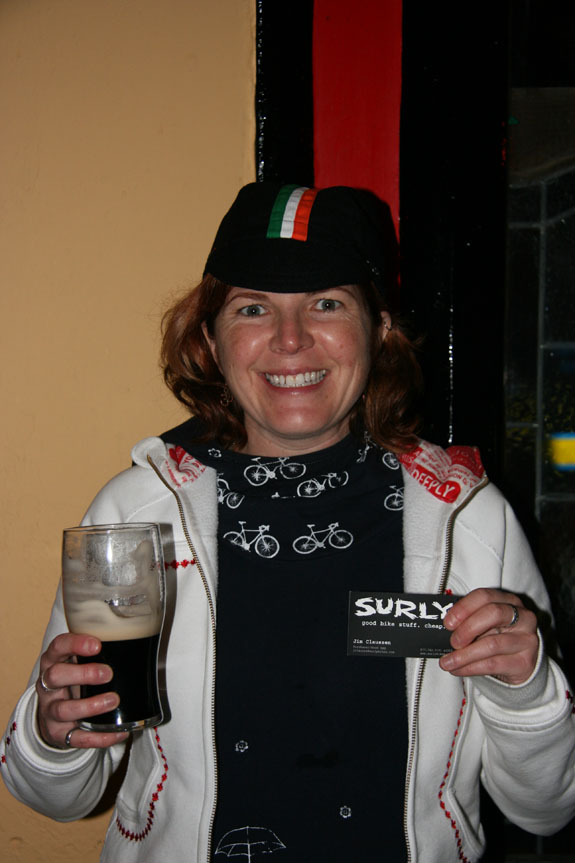