This one time at raft camp…

At 2:30, on Thursday - after my last meeting - I was out of the building and pedaling toward the Minnesota river.  I made two stops (one for libations, one for gas station snacks) and pointed toward the Bloomington Ferry Bridge...my launch spot for another outing in the raft.

The packing configuration was the same as those of my last couple of trips:  Freeload racks, Revelate Designs frame bags, and Xtracycle roll-top duffles.  But this time, I incorporated camping gear into the mix.  That adds volume, weight, and an added degree of packing complexity to the system.  This is a scenerio where the rack and duffle set-up really shines…the bags easily hold the extra goods.  However, that doesn’t mean that I can just throw anything in without thinking about its placement in the bag.  There has to be some sort of method to the madness, so my gear won’t be compromised during its transport.

The Travelers Check got a front disc brake recently...an older Avid mechanical.  I'm running a single brake, and I'm not strapped/clipped to my pedals.  So I wanted a little extra stopping power up front.  I brazed a disc caliper mount on the Long Haul Trucker fork and removed the canti pivots.  Yeah, McGuyver, that voids the warranty.  The LHT axle-to-crown distance is shorter than that of the T-Check, so I run a larger tire in front to keep the geometry close to the stock numbers.  The higher-volume tire adds a little more passive suspension, too.  The LHT fork was originally mounted, because I wanted mid-blade rack eyelets and my first T-check fork came without them.  Installing the LHT fork and larger tire was the path of least resistance at the time.  I've kept it that way, because I like the way it performs...and, compared to a T-check fork, the LHT lends itself better to the modifications I've done.

At 4:29, I pushed off the muddy bank and accelerated, without paddling, to a brisk walking speed in the green-brown water.  My last Minnesota River bikerafting trip, in August of 2009, started in the same spot, but the river was comparatively lethargic at that time.  It was immediately apparent that I’d be able to cover some distance before night settled in.

The bike trail is still under water in most areas.  It's 1.5 meters deep in this spot.  Check out the silt lines on all of the tree trunks...a predominant sign of Mother Nature's seasonal smackdown.

I reached the old railroad swing bridge at 5:52. 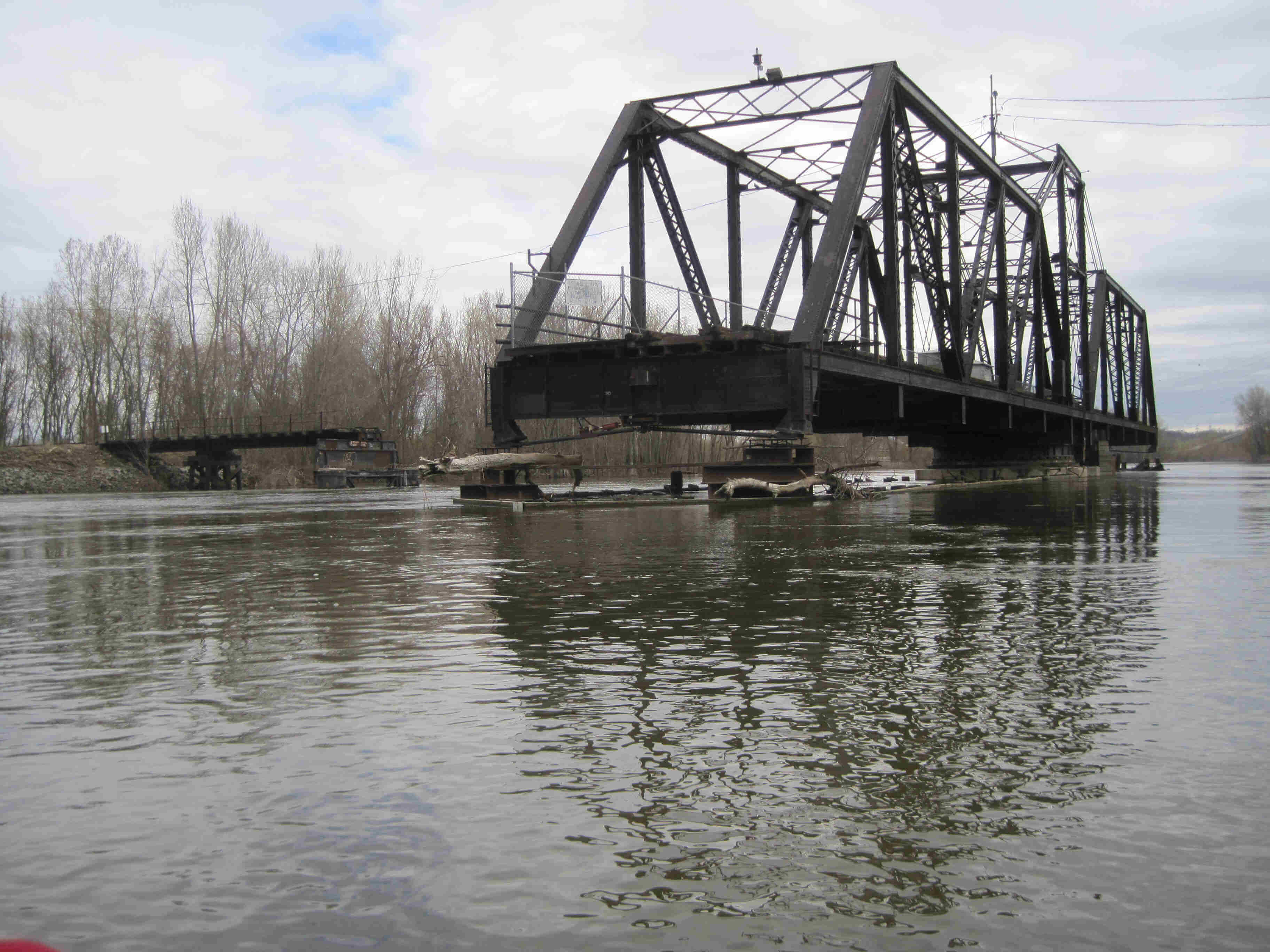 Around 7:00, I stopped at the Lyndale lot to stretch and pee, then set out onto the river for the search for a campsite.  My goal was to be out of the water by 7:30, so I could make camp without the need for a headlamp.

40 minutes later, I found a promising spot in a sheltered backwater area, pulled the boat from the water, and, by the warm light of the setting sun, set up my Hennessy Hammock and collapsible woodstove on the newly-formed, sandy island. The site was perfect, and the time was right.  I was ready to settle in, take in some calories, and enjoy the warmth of a fire in my stove. 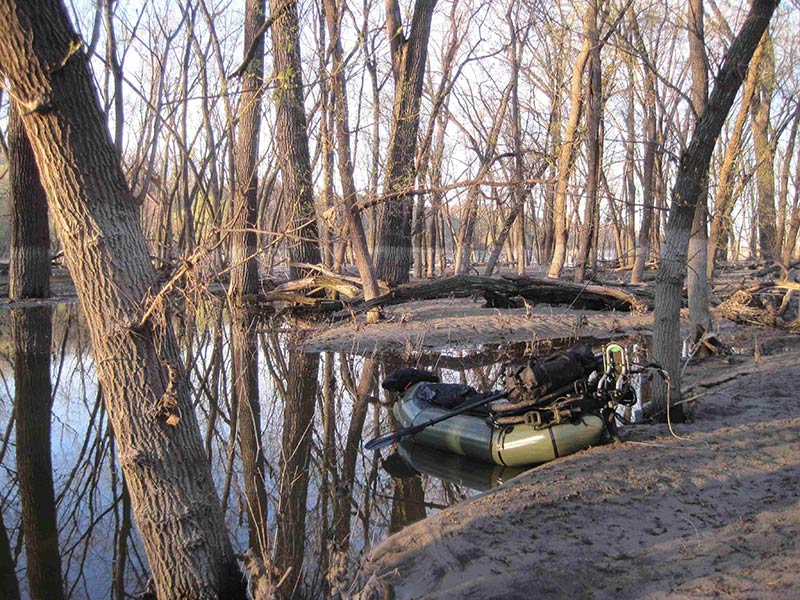 Thursday night was spent drinking wine and tea, eating (burritos, cashews, gummi bears, taffy, sunflower seeds, almonds, Bit o’ Honey, and a brownie), heating water for my sleeping buddies (two 800ml Klean Kanteen stainless bottles that get stuffed into rag wool socks), and just feeding the little stove.  The wood was damp (it rained in the morning), so I split most of it using my Ontario RAT-5 knife and a 75mm O.D. log (used as a mallet).  This process exposes the dry inner layers that catch fire much easier than the damp outer surfaces of the branches.  I carry fixed-blade full-tang knives, instead of folding knives, because they endure more punishment of this type.  And I always have a smaller Leatherman blade if I need something for detail work.

As the temperature dropped, I pulled my reflective blanket around me and funneled some of the stove’s energy toward my body core.  I always bring one or two of these blankets (the heavy-duty grommeted kind…not the Mylar space blanket type) with me when I plan on camping.  They create warm, dry, modular shelters when tied to trees or, in this case, just wrapped around me and left open in the front to welcome in some heat.  I situated my “living room” at the base of a tree, so I'd have something to lean against while I enjoyed the evening.  The closed-cell foam, used to pad the bike and raft, became an insulating cushion between me and the damp, cool sand.

I retired to the hammock after 1:00 AM and awoke, after some quality sleep, to a blue sky and sunshine.  I made a quick breakfast of instant oatmeal, almonds, green tea, and some peanut butter cups.  Then I packed up, erased any trace of my stay, and made my way back to the main river channel.

I spent the day paddling, watching bald eagles…sometimes 10 at a time, enjoying a cocktail or two, eating, and thinking about how cool it is to have the river to myself.  During my day-long session in and around the river, I didn’t see a single boat.  Judging from the abundance of wildlife around me, it was apparrent that nature appreciates the absence of close-proximity machine-generated noise as much as I do.  I enjoy watching the tugs and barges maneuvering in the channel, but peace and quiet ultimately rank higher in my book.

The coal-fired power plant can be seen from several kilometers in many directions.  It’s one of the many landmarks that I use to determine my location while I’m moving through the river valley…on land and water.

When I got to Picnic Island, it was nice to see that boatside grilling is available there.

I couldn't pass under the Pike Island bridge, so I simply paddled around it.

At 4:30, I reached the spot where the Minnesota River empties into the Mississippi River...the end of the paddling portion of my bimodal trek.    After some failed attempts at landing the raft (the approaches were too gradual), I found a good spot in the shadows of Fort Snelling.  The bike path leading home was no more than 50 meters away.

I packed up my gear, cooked some noodles on my Esbit stove, and listened to a couple guys playing guitar near the river bank.  A few minutes after stepping on terra firma, Scott and PK rolled up.  They were on a mission to find another good beer stop and just happened to be riding in this area.  We chatted and geeked out on my gear for a while.  Then they were off to fulfill their collective destiny. The guitarists eventually departed...probably had minstrel cramps and couldn't perform to the level that the woodland creatures demand.  I was left to my thoughts for a while... What a great trip.  Nice weather, solitude, great views...and all done in a relatively small span of time, on a small budget, and without the need to incorporate any form of motorized transport.

At 6:05, I pulled into the yard...tired, dirty, and thinking about  possiblities for the next land/water traverse.  In the Land of 10,000 Lakes, I've got some solid options.