Things to Do in Dorset When You’re Dead

(a.k.a. "The Collected Drafts of All the Blogs I've Meant to Post But Didn't")

*** This previously recorded essay recaps my experience last year at an event that just wrapped up its 2017 iteration two weekends ago. By all accounts participants had just as much fun this year as I had last. If you believe what you read on Facebook, that is. 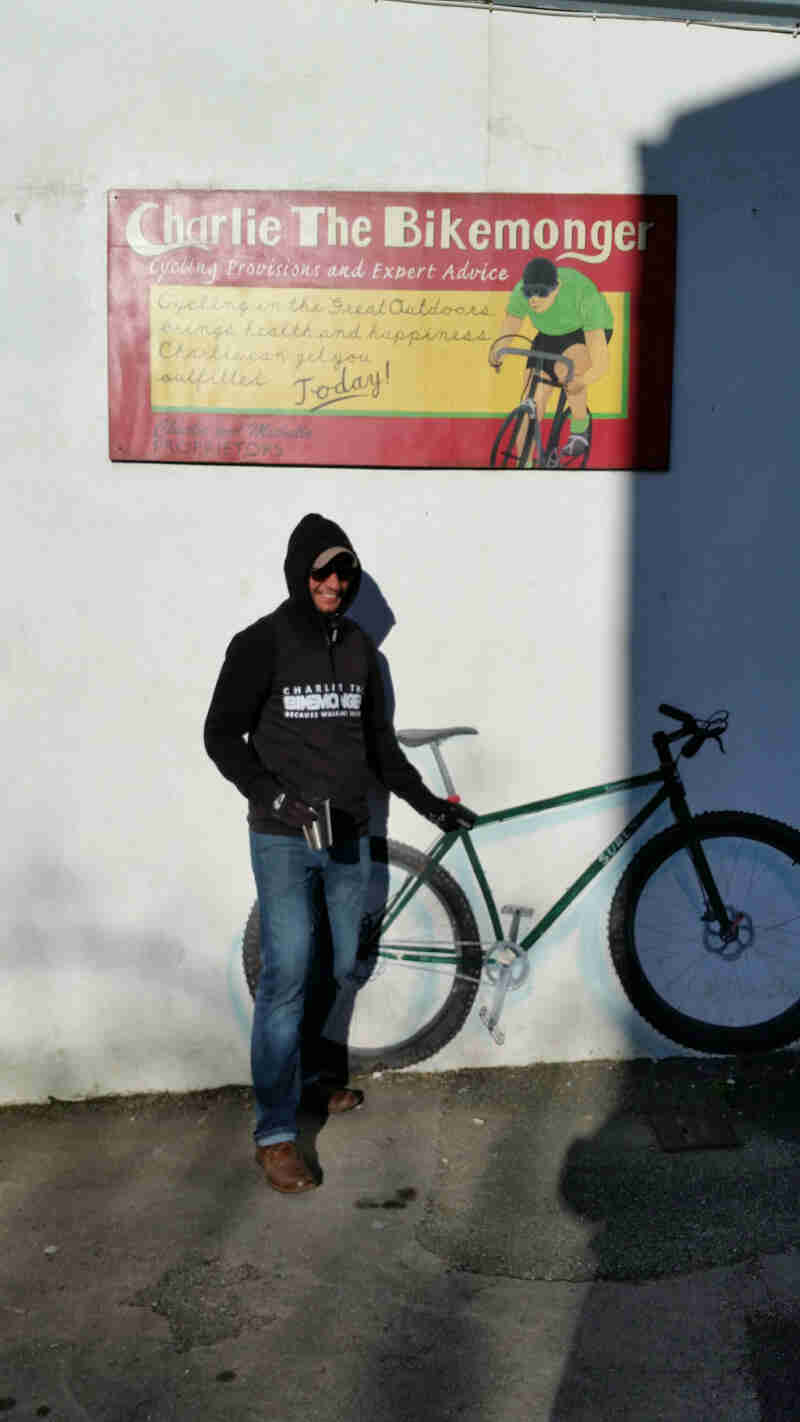 Back in April 2016, the Croatian Bear and I headed to the UK for some work-related shenanigans. We pedaled Wednesday bikes on and over beaches in Scotland at an event called Forth Fat. Then we headed south over the course of a few days visiting Surly retailers along the way. Eventually we landed in the seaside town of Swanage. This lovely place, at what seems like the edge of the earth, is home to Charlie the Bikemonger. The Bikemonger is the host and diabolical creator of a wee pedal tour called the Dorset Gravel Dash 50:50. So begins our story. 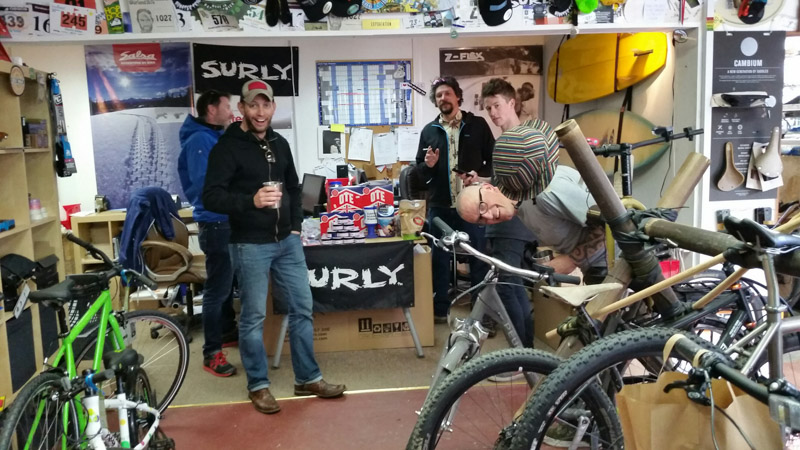 It's all in the details. “Bring ‘cross bikes,” we were told by Charlie. My ride for the Dorset Dash was a 56cm Straggler with 650b wheels. The Bear had lined up a Cross-Check, the same model Pat would be riding. 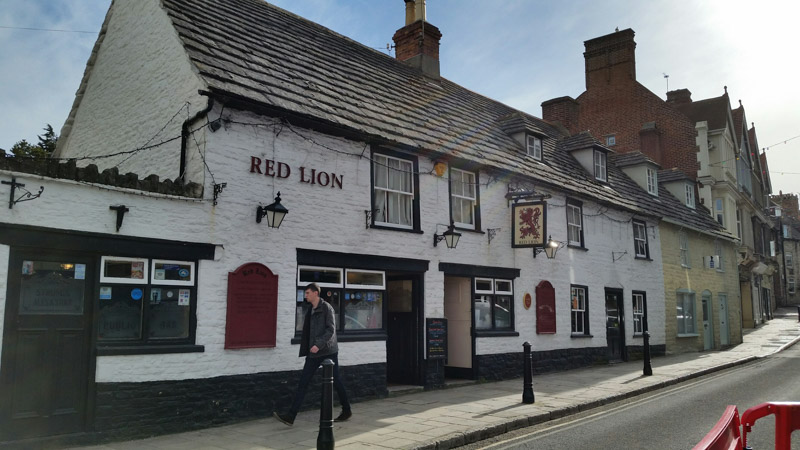 Swanage is a very lovely place. We settled in and eventually went for dinner. It didn’t take long for a disparity to emerge in our conversations with fellow Surly riders. Their choices of bikes ranged from Ogre, Krampus, and ECR to Pug and Wednesday. Our man, Jack, employee of the Monger, would also be riding a Straggler. It turned out his cohorts had been filling him with dread for days telling him that his bike choice would spell his demise. I did my best to laugh along with this obvious joke. It was a joke right? 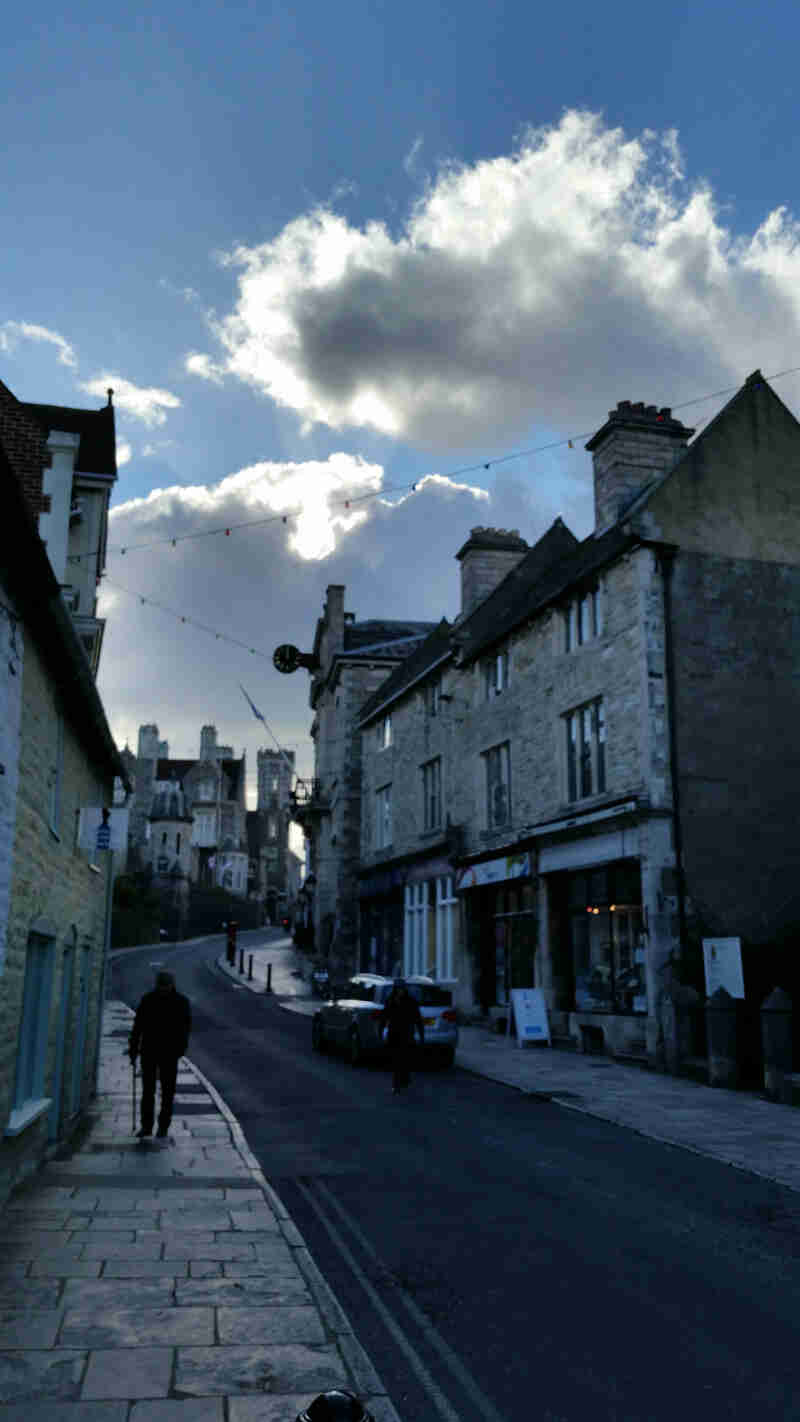 It didn’t matter at that point anyway. Besides, after having ridden Straggler regularly for well over a year I knew that bike could handle just about anything. Little did I know I was about to gain an all new appreciation of its capabilities. 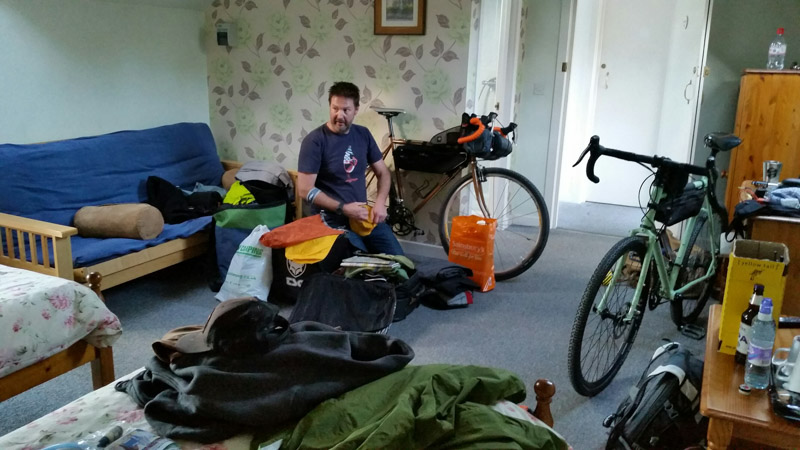 The time honored tradition of packing the kit. Too bad things didn’t pan out for the Bear. He had been sick and decided to bag the ride and drive the sag wagon instead. This left Pat, Jack, and me at the start sizing up our “skinny” tire bikes and casting sideways glances at all the beefy treads surrounding us. 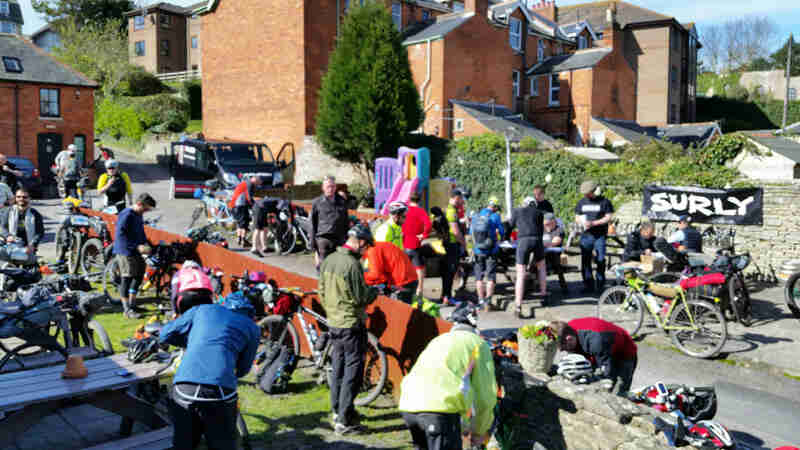 I’m getting ahead of myself. What exactly is this event, anyway? The Dorset Gravel Dash 50:50 is the more leisurely version of the full Gravel Dash. Instead of riding the total 100 miles in one sitting, the 50:50 is broken up into two days of roughly 50 miles each. The evening is spent camping in a field with a massive group of likeminded lunatics. Every rider is required to carry all essential gear. Beer and beverages may be dropped with the sag wagon. Otherwise riders are on their own.

Now, it’s not a bloody race. Charlie the Bikemonger makes this clear from the outset. In fact, the primary rule of the ride is printed right on the number badge: “Don’t be a dick.” You can ride as fast or slow as you want. The coordinated pub stops are highly encouraged. They might just salvage your ride, in fact. They certainly did mine.

The mood was high at the parking lot of the Red Lion. Soon enough our ribbon of riders rolled through town waving to residents on the street. Weather conditions were ideal. We casually cruised the waterfront before meandering into rolling hills. I had no map, no GPS, no idea where I was going, and no problem with any of that at all. Isn’t it refreshing to experience that from time to time?

With little warning the route took an abrupt left off the pavement. As the double-track gravel came into view we began climbing. And we kept climbing. Now I certainly wouldn’t call these mountains per se, but they are a variety of hills unknown in Minnesota. Glad I wore my hiking shoes because this wouldn’t be the first hill I’d be pushing. I relaxed and paced myself for the long day ahead. The weather was clear and warming up. The views were brilliant. 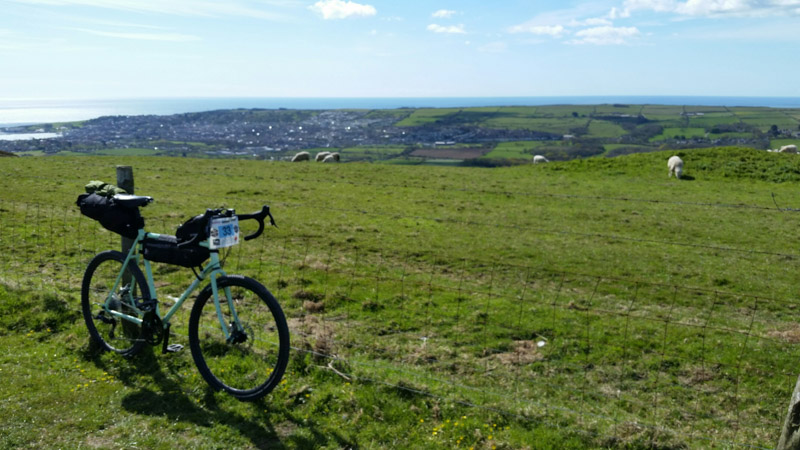 Hey! We just rode from there. Swanage in the background. 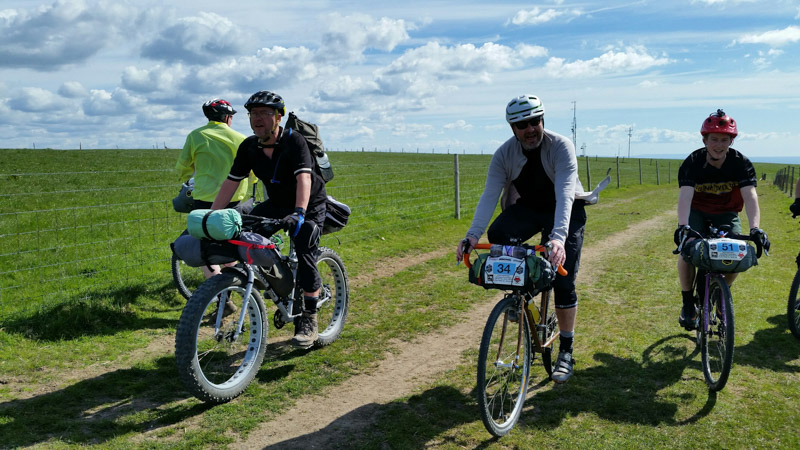 A portion of the Surly Crew – Jon, Pat, and Jack. They were my guides and commiserators as some of those miles dragged on. It was easy for me to initially assess the ride in overly simplistic terms: “50 miles. You have all day to do it. No big deal, right?” In flattish terrain that might hold true. The Gravel Dash course presented some fantastic challenges that were beyond my frame of reference. 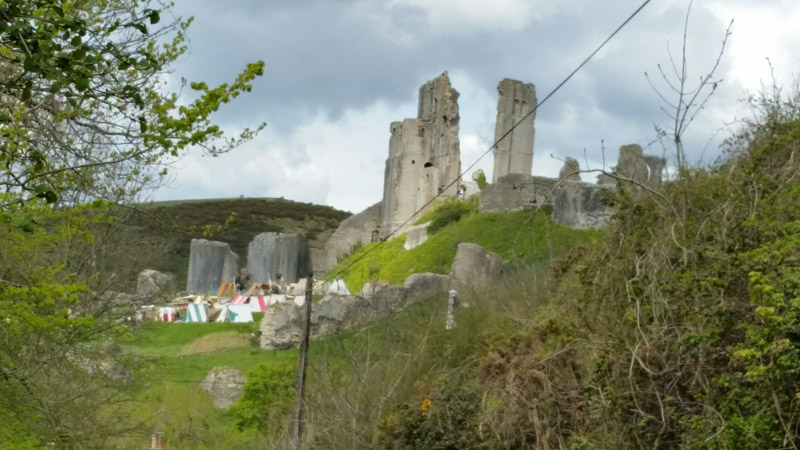 During both days whenever things would get a little tedious you’d crest a hill or round a corner to see something like … whoa, a castle! Corfe Castle in this instance. 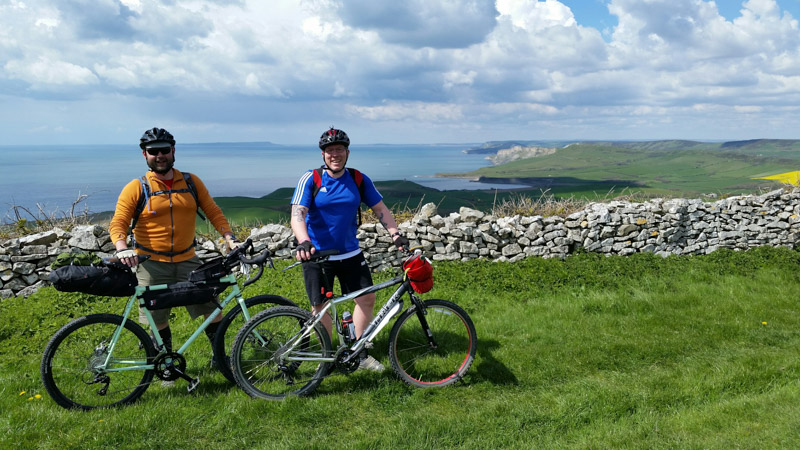 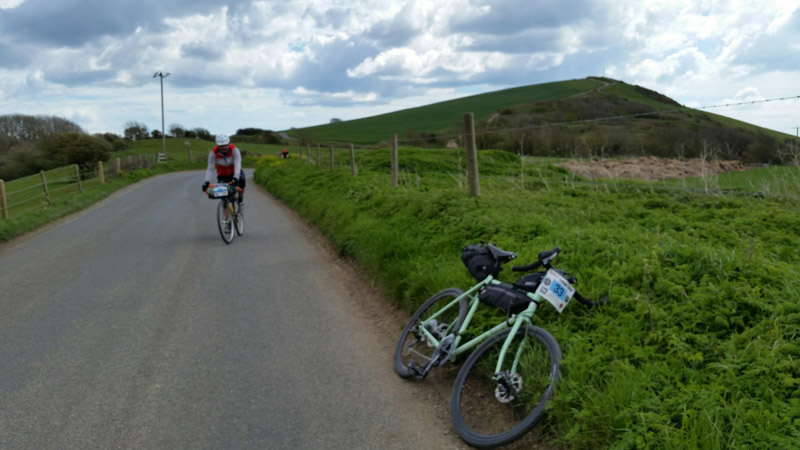 What goes up must come down. We descended from the top of the hill in the background. I do wish I’d got some shots of the rutted gravel tracks I was threading those nimble Knard 650b tires between and around. Limiting speed was a bit of a priority, however. My hands were too cramped from braking to work the camera anyway. 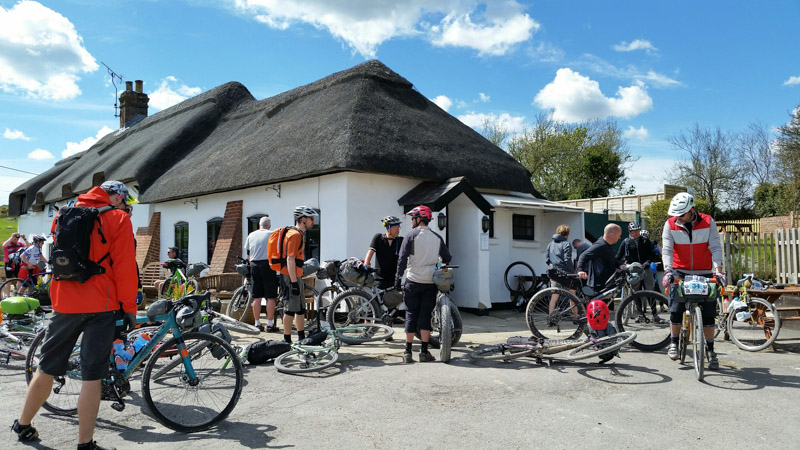 By the time we rolled into the first pub stop, Sailor’s Return, a pint was well earned. Let’s just say for the record we hadn’t ridden nearly as far as I thought we had. But that was also before I’d been informed that the first day was actually “just a bit longer” than 50 miles. Details. 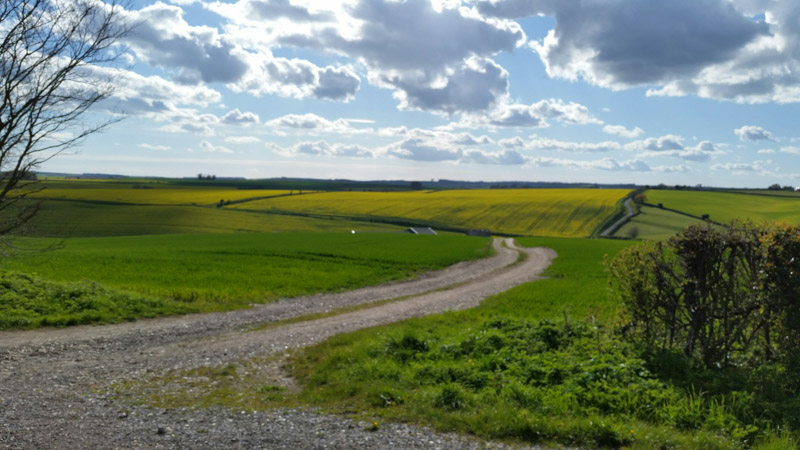 At some point in every long ride you just have to put your head down and log the miles. But again, the scenery wasn’t too shabby. Somewhere before or after this photo, however, was the “Field of a Thousand Bumps.” Have you ever ridden a cobblestone street that’s missing every other stone? That was the only time during the ride that I truly yearned for a larger volume tire. 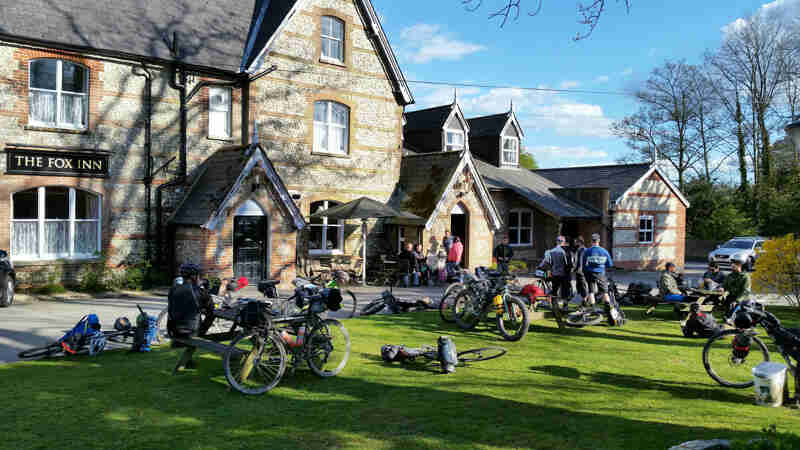 The second, and final, pub stop of the day, The Fox Inn, was a make or break moment for me. Seven miles. That’s what I was told we had left, give or take, to arrive at camp. I was eyeing the digits from my number plate that would summon the “Broom Wagon of Eternal Shame.” Luckily the Power of the Pint compelled me to saddle up and keep riding. 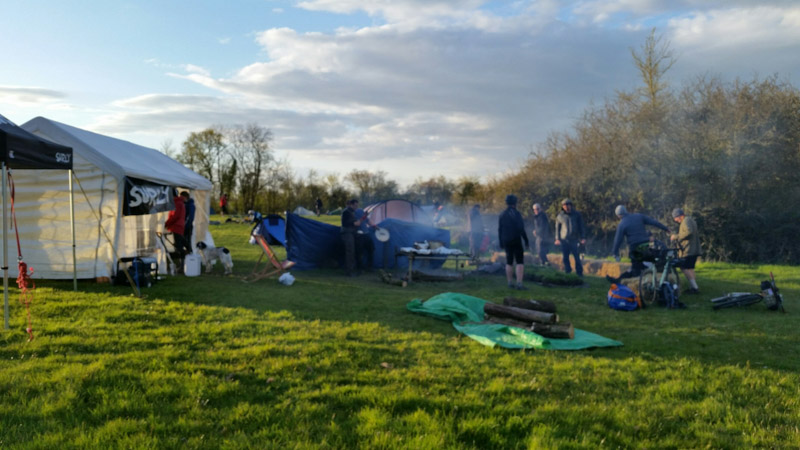 We rolled into the field that would be our lovely home for the night right at sunset. 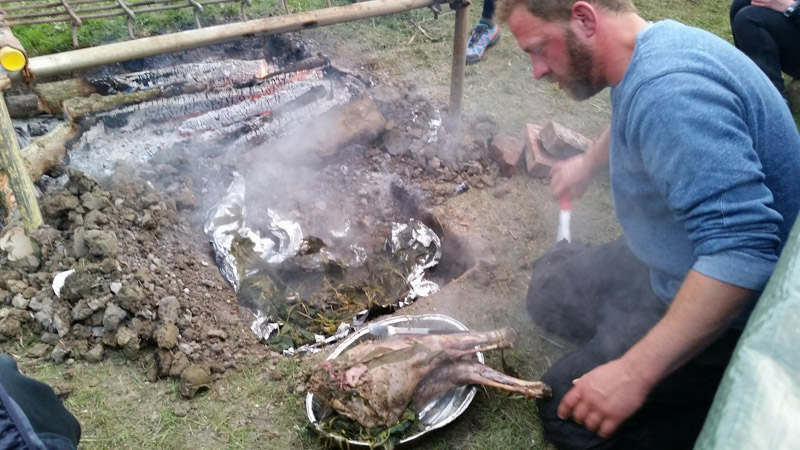 And our camp chef, Joel, labored over these venison quarters. That Bikemonger keeps good company and doesn't skimp on the sustenance. 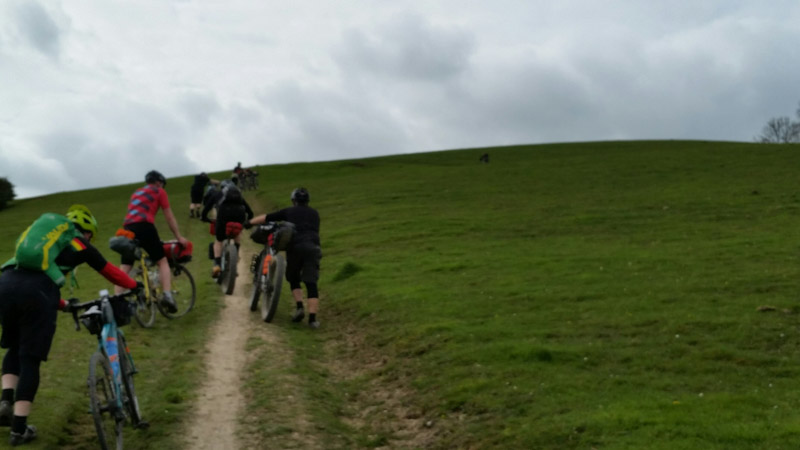 Before we knew it we got to do it all over again the next morning! Come on. It's a bloody hill fort. It wasn't meant to be easily invaded. 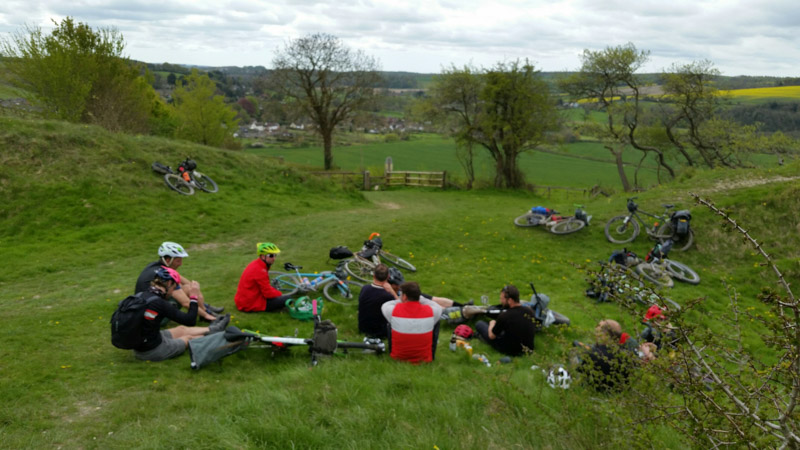 I really grew to like my riding companions on Day One. On Day Two as this full-on picnic broke out I knew for sure these fellows had their priorities in order. 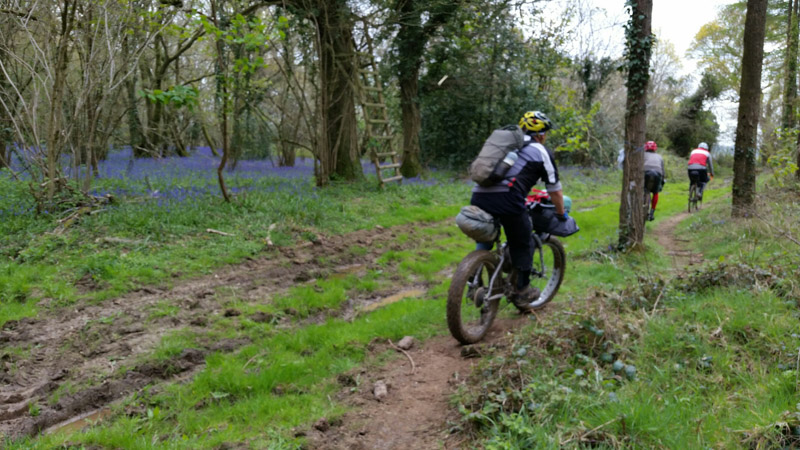 Look! Some more mud. And bumps! But such mesmerizing flowers. I couldn't keep my eyes on the trail. 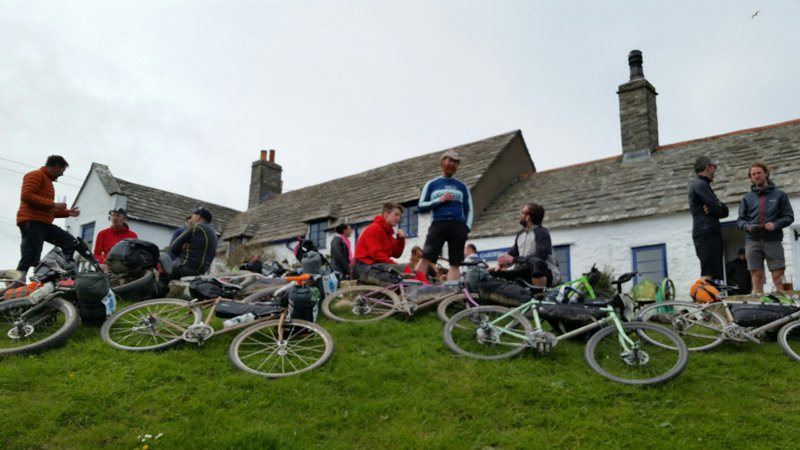 Here is where we took a diversion off course. But my hosts insisted I had to see the greatest pub in the world, The Square and Compass. Pies and pints all around left me feeling almost ambitious enough to turn back and ride the course again. I kid. 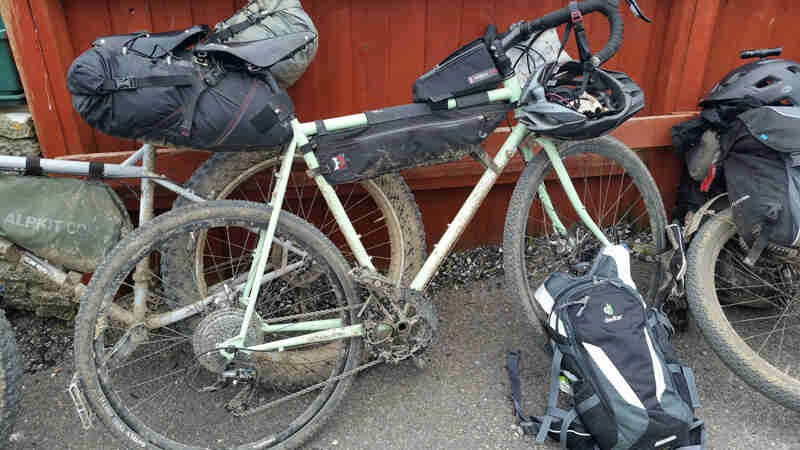 The Straggler. What can I say? This bike never ceases to amaze me. It endured pavement, dirt, gravel, rocky tracks, a few short drops in the "Beer Longcut,"and even one hilariously fun descent through a muddy chute. It never let me down. Plus, it wears those frame bags oh so well! (Sorry about the dirt, Pat.) 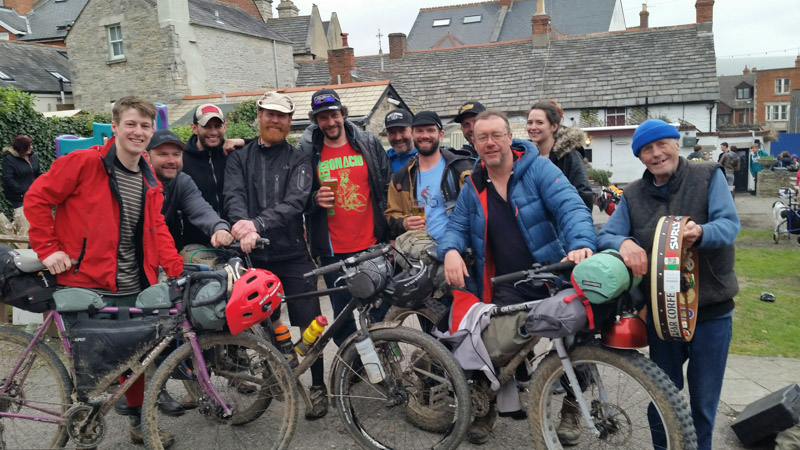 I have to say a hearty thanks to Charlie the Bikemonger and crew for a fantastic event. I got to ride with a top notch group of folks in one of the most beautiful places in the world. (Note to Swanage Tourism Board: Please make that check out to 'John Fleck' ...)

As we were saying our goodbyes Charlie admitted he'd hoped Dorset would have broken me. Well, almost. But not this time. I guess I'll just have to make a return trip and see how things go.