Today I received an unsigned letter via email, addressed to a hidden group identified only as ‘Homie09’.  It instructed the reader, as if it were a ransom note, to reapply the attached Homie Fall Fest flier to whatever blog it is he or she writes for, and to pay special attention to the revision which changed the specified meet-up location from Grumpy’s to Whitey's in NE MPLS.  I made note of the fact the odd meet-up time (10:49) had not been altered.

Curious, I called up the only number I knew to be possibly affiliated with any of the people most likely to perhaps associate with the outskirts of the perimeter of the inner circle of the group which in all likelihood is somewhat responsible for having something to do with planning the annual Homie Fall Fest, which as you may know occurs around here every autumn.   I was given another number and told not to explain where I had gotten it, and then they hung up.  I dialed this number and waited while it rang and rang and rang.

“Hallo?” a vaguely European sounding voice said -cautiously- when it was finally picked up.

“Yes, hi, um, I received a revised Homie flier and I just have a couple questions.  Am I talking to the right people?”

A prolonged pause followed, the receiver of the phone on the other end muffled.

“My name is Nels Unterwerer.  I am the undersecretary to the director of Homie relations, Mr. Atticus P. Townehomme.  What is your question?”

What?! What the hell was going on?  I stalled briefly, uncertain what to make of this bizarre series of events, then shook it off and forged ahead.

“The, uh, “ Nels cleared his throat.  “The, uh... apparently, uh, Grumpys downtown doesn’t open until noon,” he replied, and promptly hung up.

I thought on it for a while.  Was it merely a joke? Was it ridiculous mistake by a bunch of bike (and god-knows-what-else) addicted wasters?  Or was it a red herring designed to throw the hounds off the trail?  Any option seemed implausible. Wasters would never have the follow through to pull off something like the Homie, and it wasn't funny enough to be even an esoteric joke, but what kind of people would deliberately and quite publicly change the location at nearly the last possible hour?  And who exactly were they trying to throw off, anyway?  And why?  It was either brilliant or stupid as hell.

Anyhow, there you have it.  I am hereby posting the revised flier.  And of course, please take note of the location change. 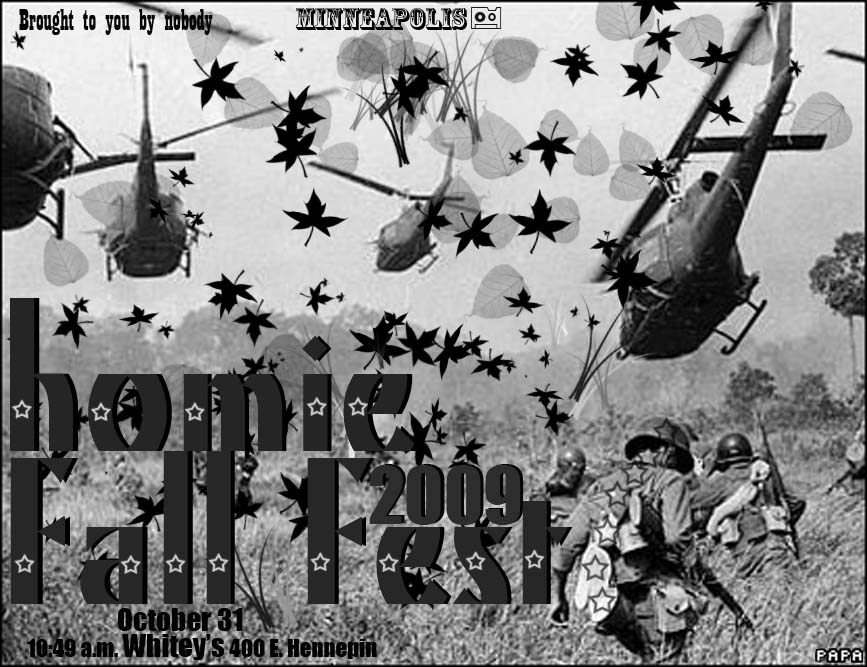