The Descent Into the Devil’s Canyon

Words by me. Photos by Mike, Paul, Rusty, Donald and myself. 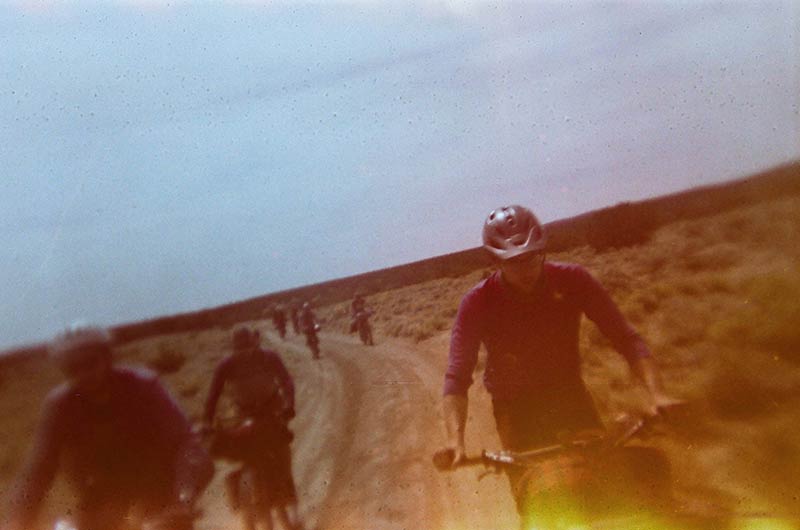 After a crazy couple of crazy days with Blue Dog and friends in Tucson, I rented a car and pointed towards Santa Fe. Narrowly beating the sunset, I drove as far as Truth or Consequences New Mexico… and for the record, all I saw was consequences. I showed up at the Broken Spoke the next day just before 4 pm after hitting the local REI for some iso gas and bars, and then returning my rental car. I quickly sorted my gear and packed up my 27.5+ ECR for a three-day desert ramble with the shop crew, customers and friends of The Broken Spoke. To my surprise, there were 18 people on bikes waiting for me behind the shop ready to roll out! That is probably the best showing I think I’ve ever seen for a bikepacking excursion. We rolled out en mass pointed west towards the Rio Grande with what turned out to be just enough daylight to make it to our first camp spot for the night. We set up our bags, bivouacs, and tents on a scrubby mesa and set to work building a fire, cooking food and cracking the few beers we had found room to stash. Luckily there were many flasks and other conversation lubricants abound to keep us laughing well into the night. 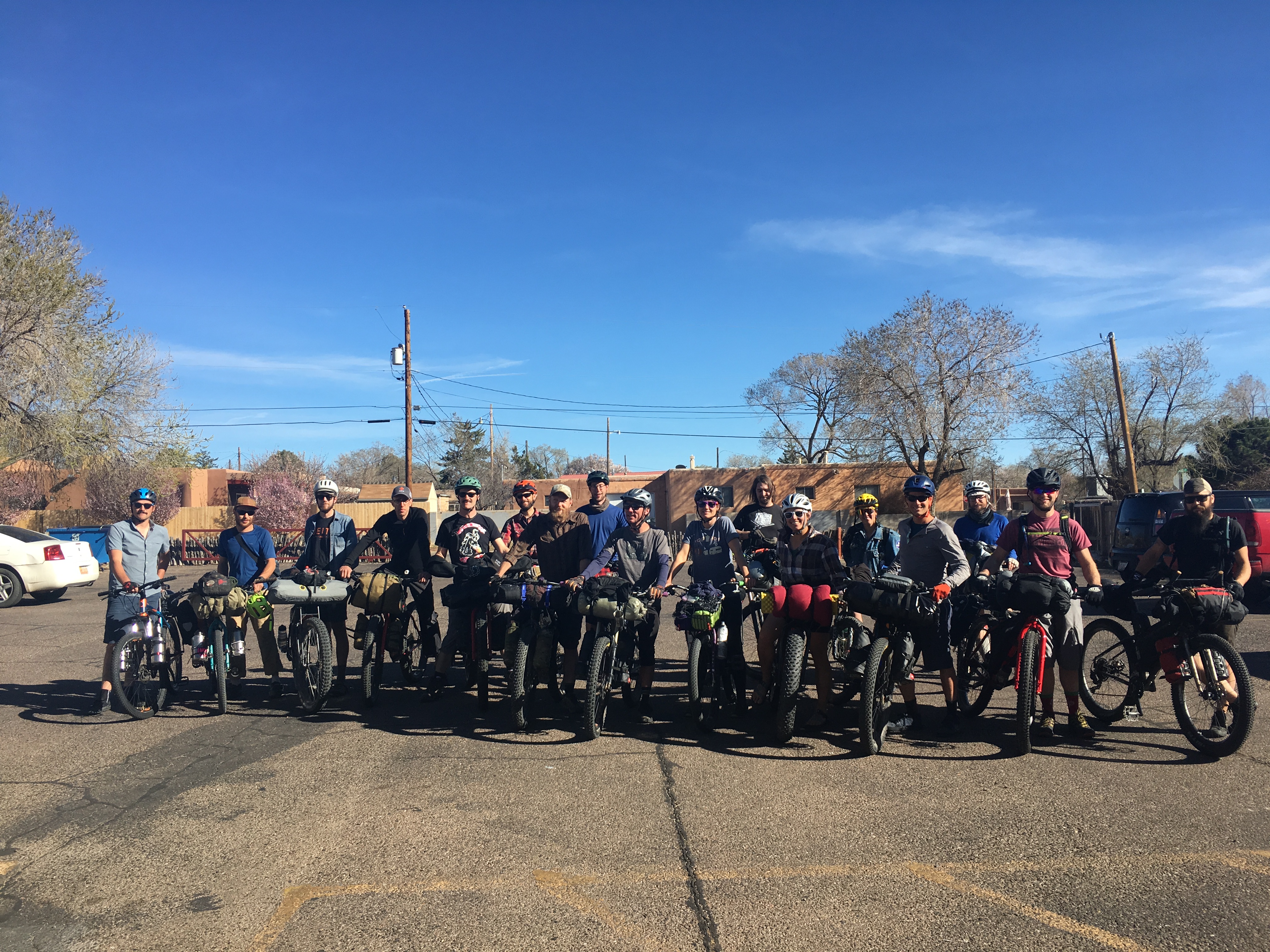 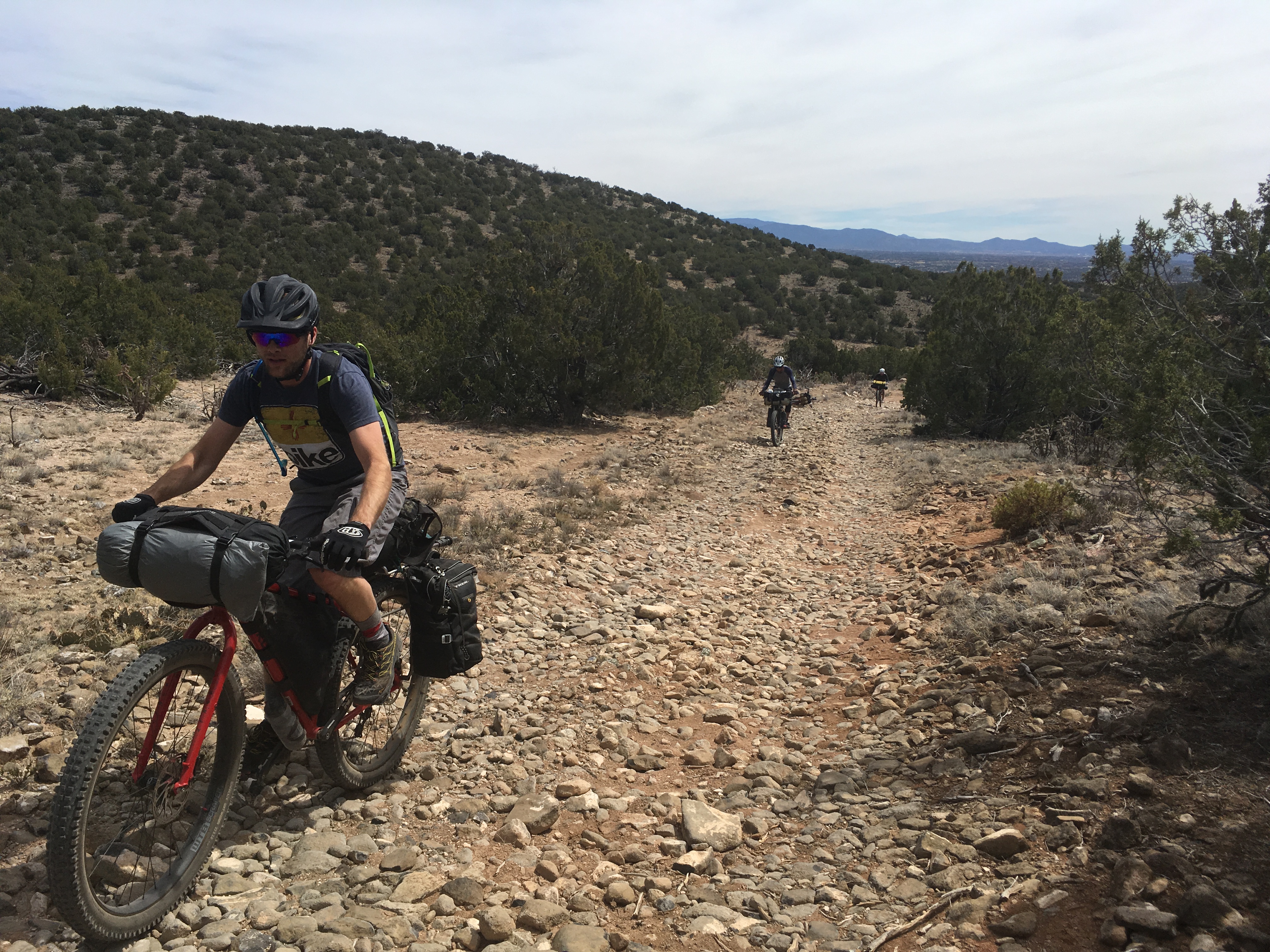 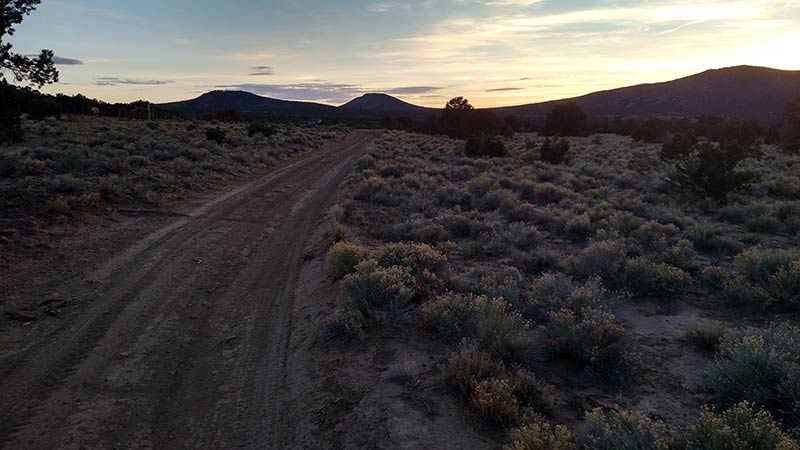 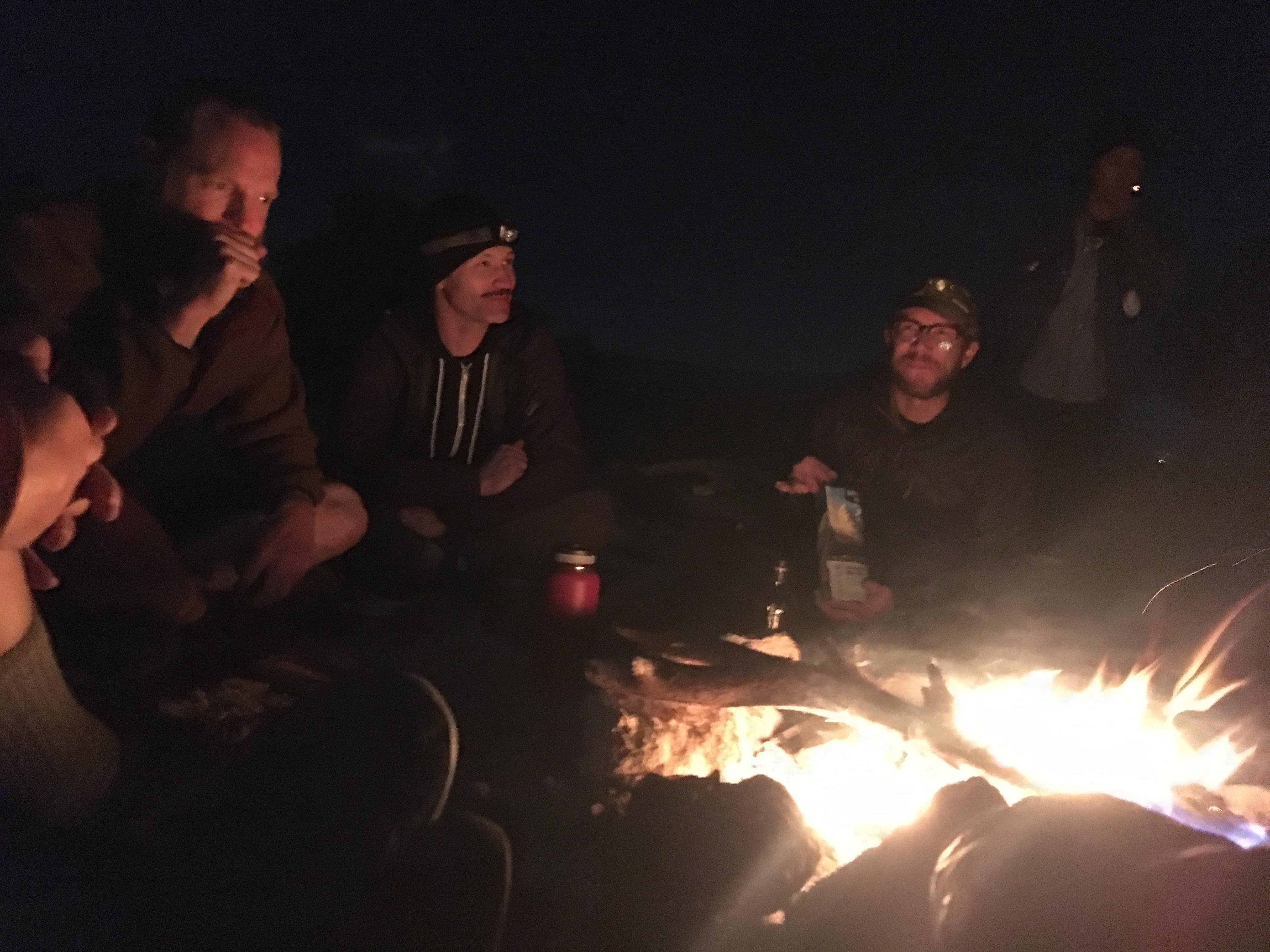 The next morning, we said farewell to about half the group that could only make it a S24O, so the remaining 9 of us packed up and headed to the water stash Owen had dropped the day before. This group now was mostly Broken Spoke staff and a few friends who had joined us for the previous year’s Surly adventure. Everyone save for our friend Donald was on Plus MTB Bikes and the extra volume would prove to be a clear advantage as the day wore on. We were headed North towards the Rio Grande again but needed to catch up with some trails that were on the opposite side of the hills and mazes of roads we were currently on. We scouted many promising looking trails only to find their terminus to be a boulder-strewn wash or that they simply petered out into nothing but dust and cacti. The trail we eventually found lead us up a grueling climb to a much-needed lunch break. Once I got my bearings I realized I had explored this area before with Cass Gilbert about three years ago on my first trip to Santa Fe. This trail I knew took us up over some short but hefty climbs to the Soda Springs descent; that even on a Krampus with a suss fork was scary, exposed and left little margin for error. 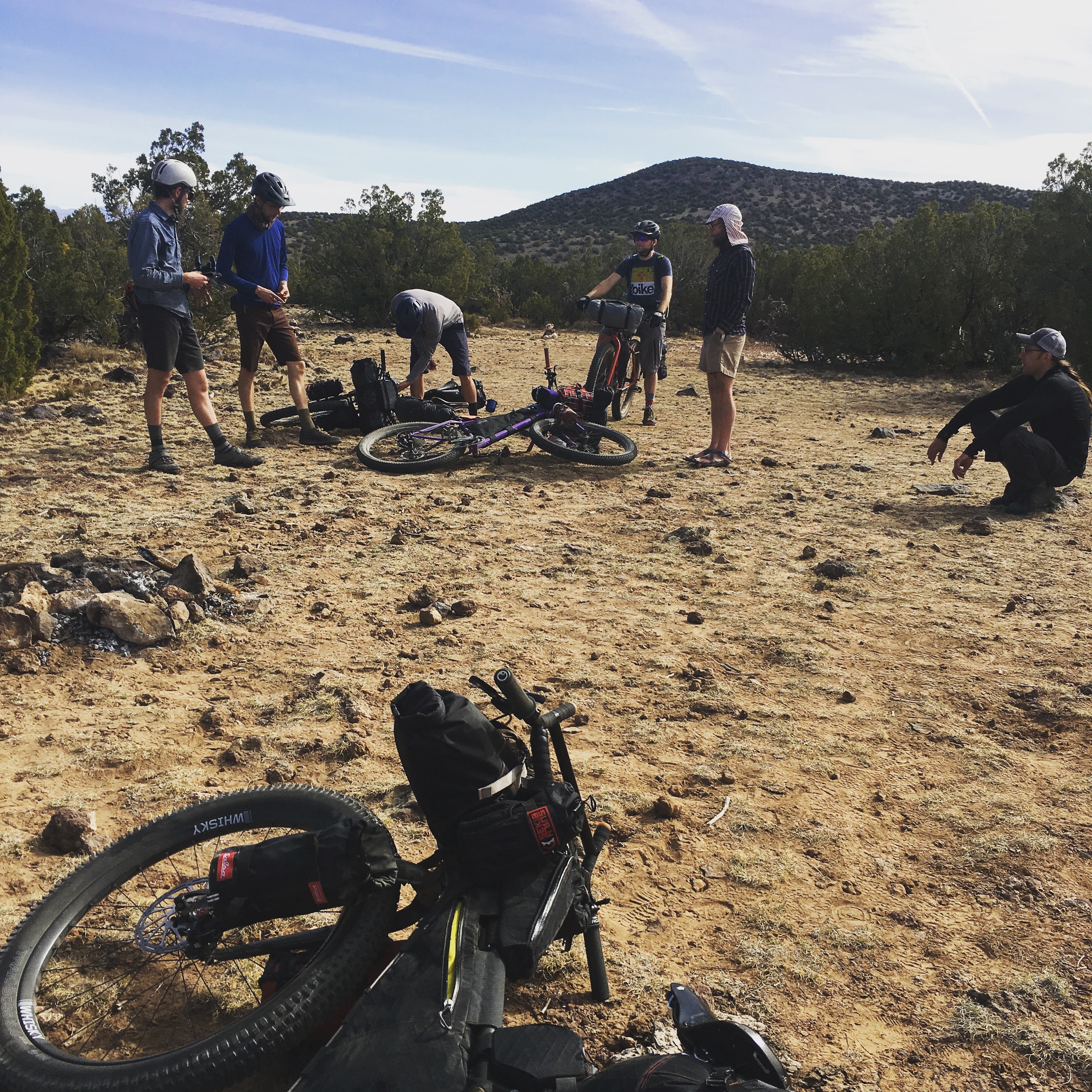 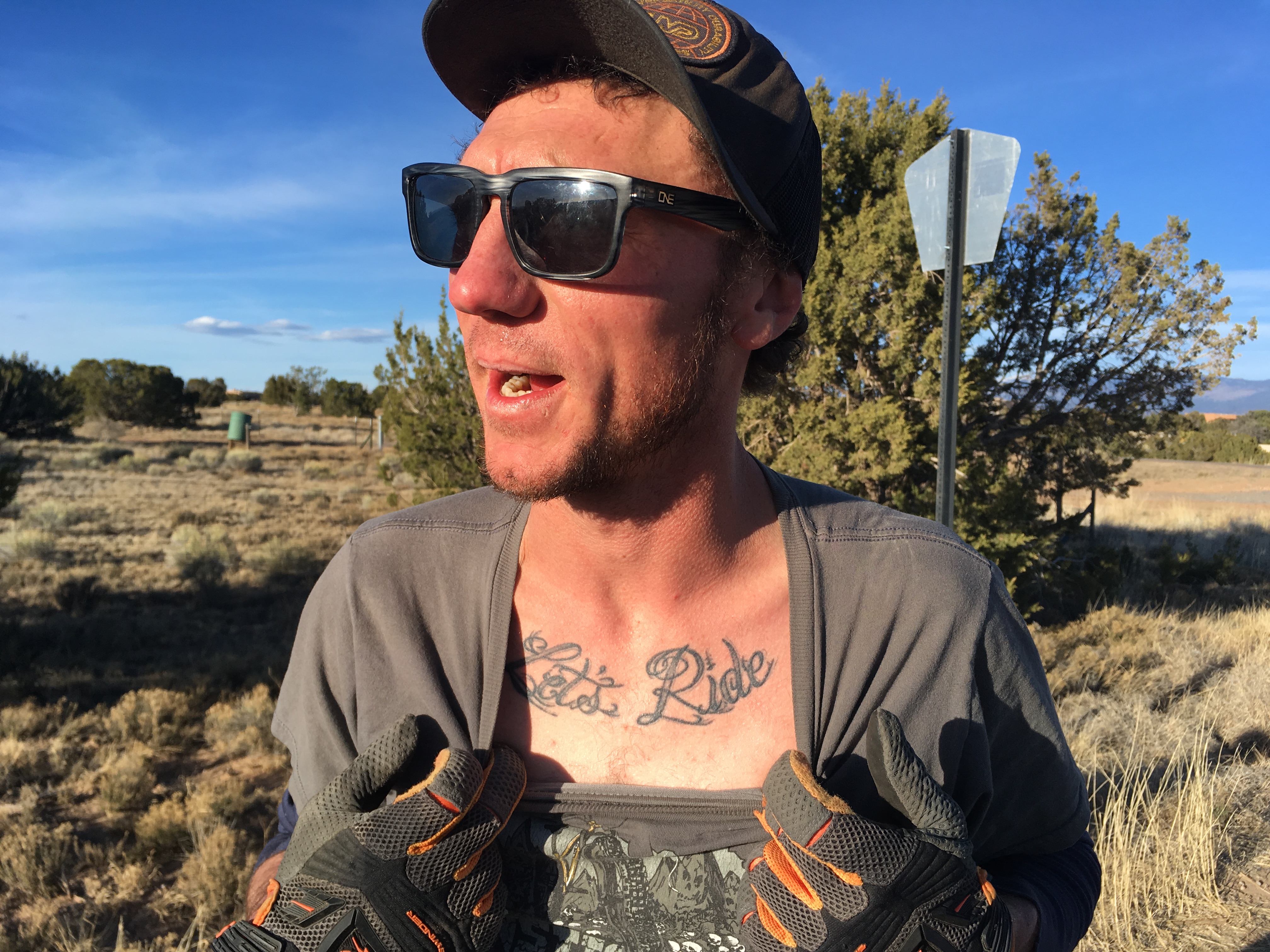 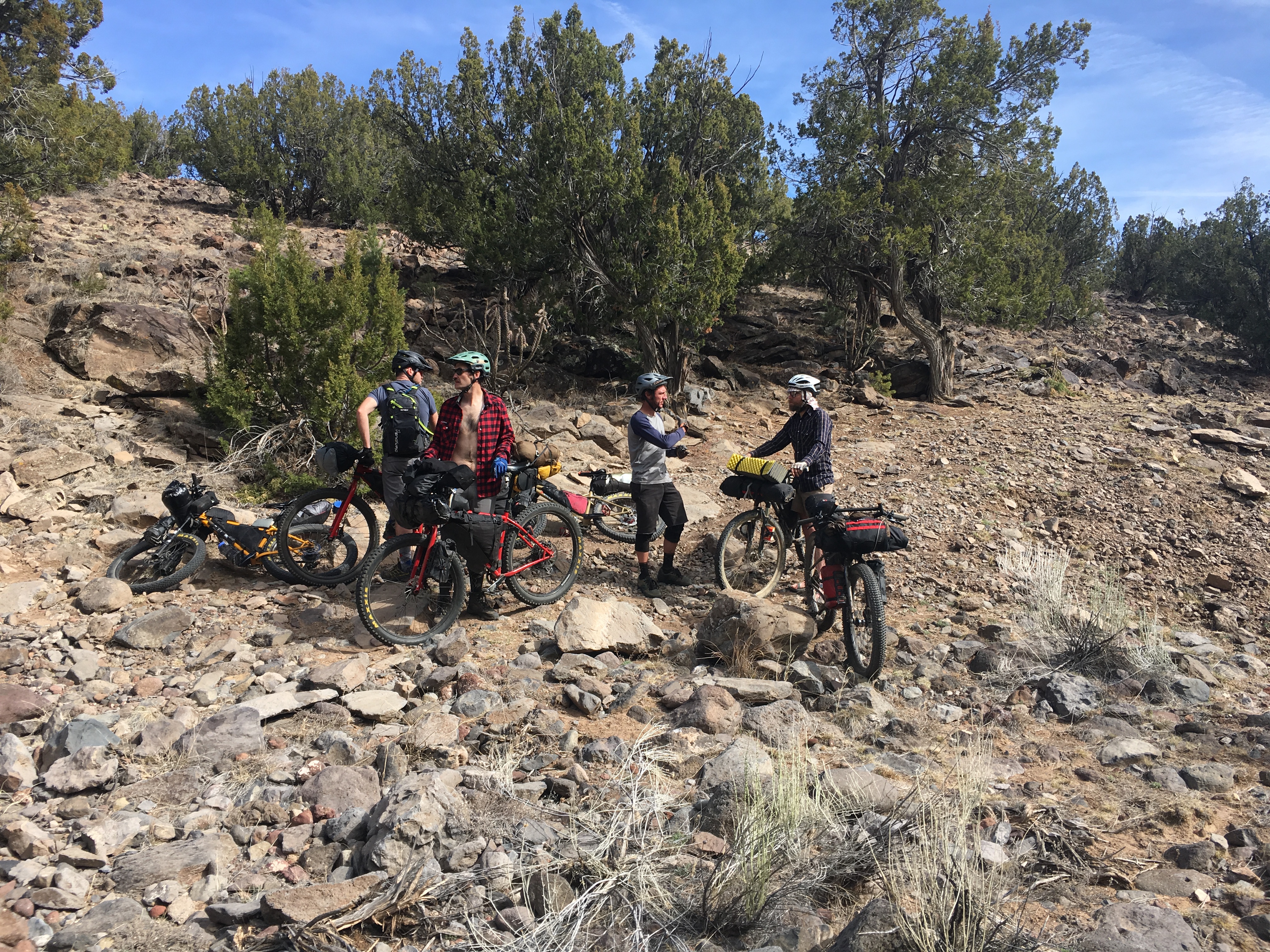 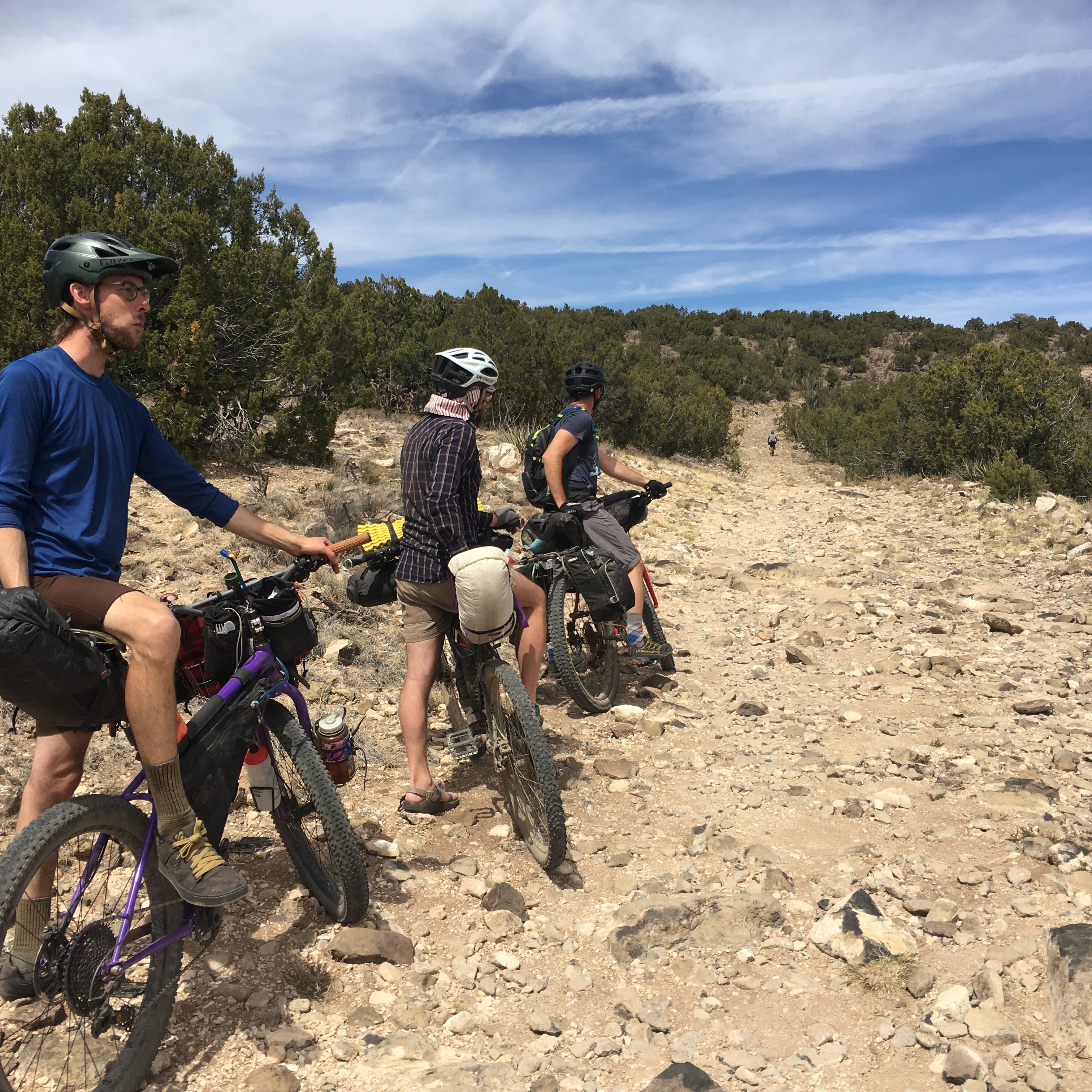 My bike up to this point had performed flawlessly: Small 27.5 ECR, Whisky No.9 41mm carbon rims/ DT 340 hubs, WTB Trail Boss 3.0/ Ranger 2.8 tubeless, Moloko bars, BB7s, full Revelate bag kit, Anything cages and flat pedals. The chunky nature of the trails on this second day was about as chunky on a grit scale can go before you call it riding in a boulder or scree field. The cacti and goat-heads build up in your treads, the rocks are sharp and want to slice your side walls and the dirt and sand make floatation a real hot commodity. Tubeless is necessary and plus tires are recommended if you want to enjoy the ride vs. merely survive, and as always, steel is indeed real if you value the integrity of your bones. In short, our plus bikes, MTB & dirt touring, seem to be tailor-made for this type of riding. I couldn’t help but say this numerous times in the best Sam Elliott drawl I could: “This here is plus country”. I was initially worried about my choice of tires not being tough enough and was questioning why I hadn’t just played it safe with a tried and true Knard/Dirt Wiz combo. But the WTBs came away unscathed and had enough traction to allow me to brag that I didn’t crash and pretty much cleaned all the sketchy stuff. 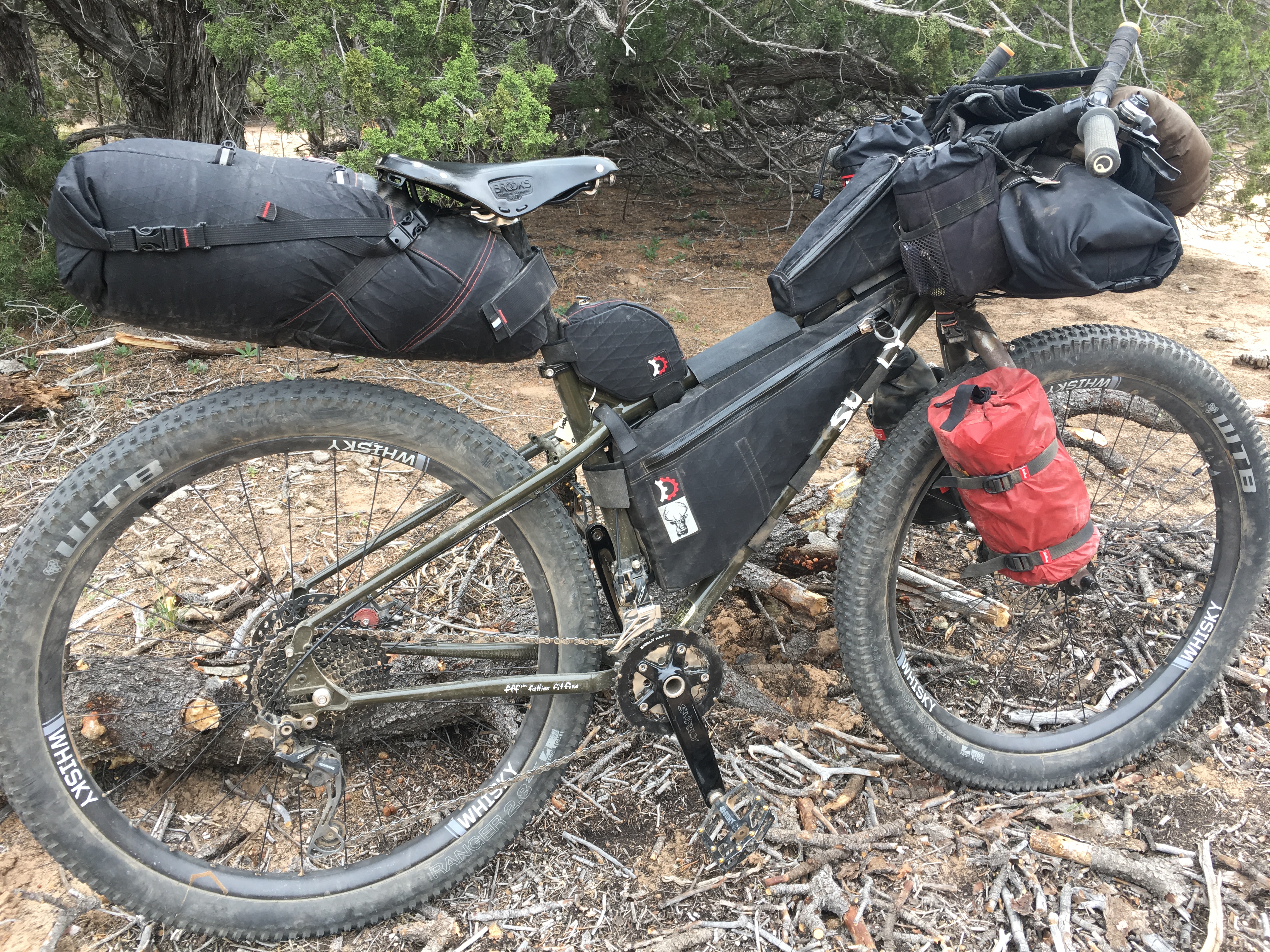 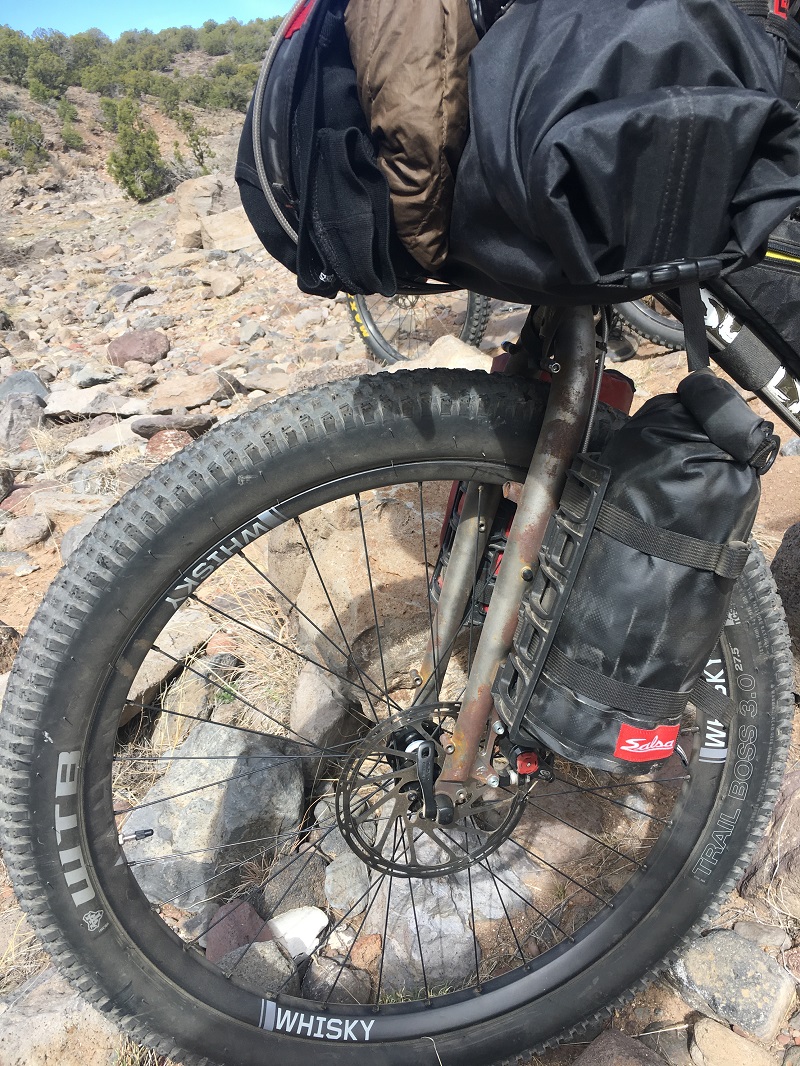 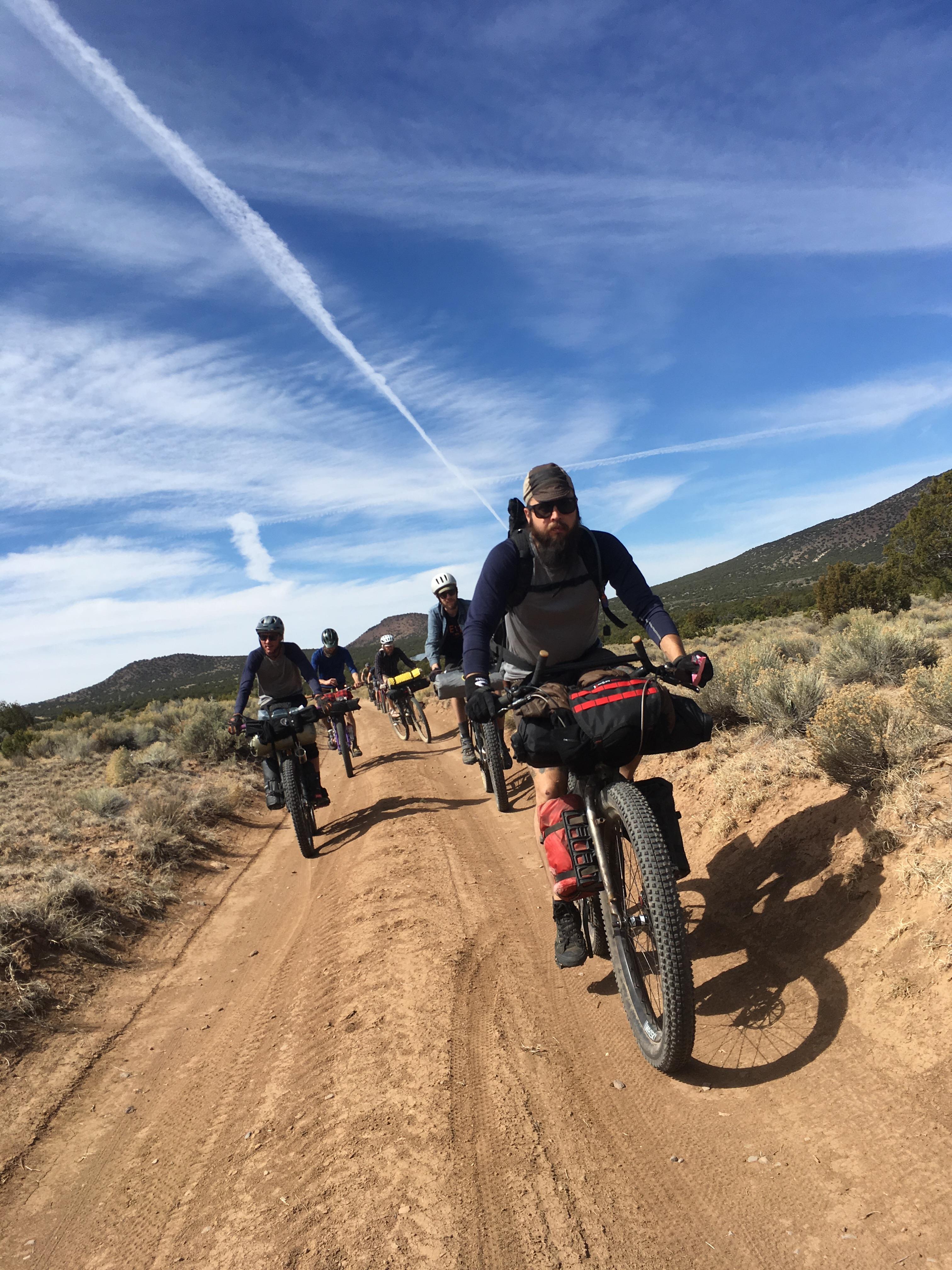 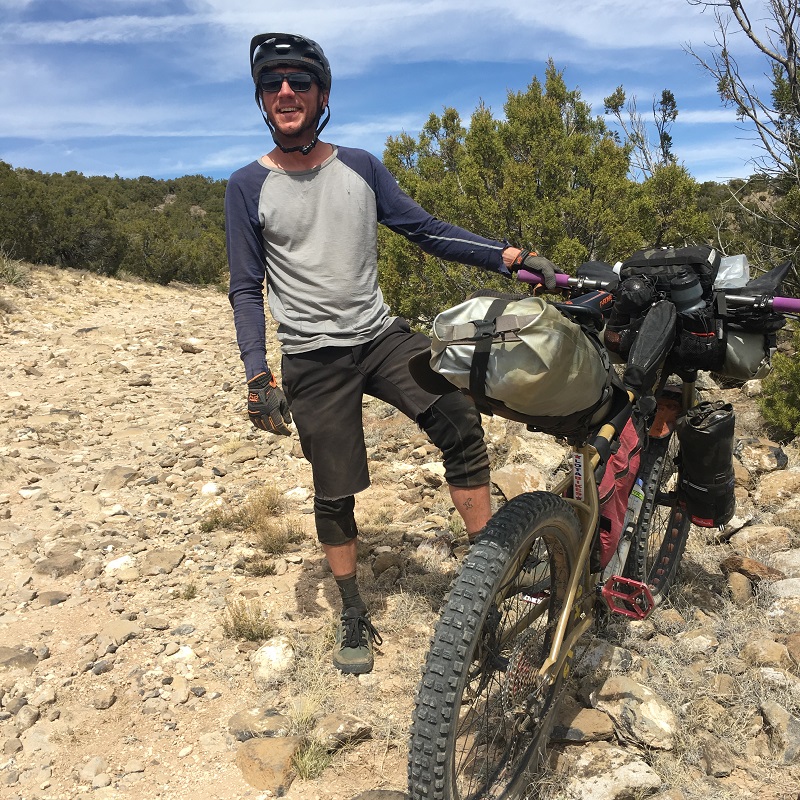 Speaking of sketchy stuff, as we climbed and descended the baseball/Softball size rocky chunder, I started thinking back to the Soda Springs descent and remembered how tight the hairpins are. I thought about the extra wheelbase on the ECR, the lack of front suspension and all the gear I was I was packing this time. I swallowed hard into the initial descent before the long drop into the Rio Grande Valley and regrouped. Something in me told me to stop thinking about it and just go for it, so I hopped off the front to plunge down the washed-out trail. Simply stating that we “rode” this part of the trail is maybe not even the appropriate nomenclature to describe the experience, as it’s more like you “surf” sections of this trail down. The switchbacks are about as tight as they come, the dirt is deep, loose and shifting as the rocks strewn about move around as you navigate through them. If you high-side a hairpin or lose your concentration on the top half of the most exposed section, it will be a painful wait for your helicopter extraction. Luckily we all made it down intact and traded stories of our various successes and failures. Mike from Broken Spoke said, “no dabbs” which is quite impressive, though I feel I have to point out he had a KM with a sus fork. I dabbed twice towards the end but otherwise cleaned it, which once again made me double take the ECR: What can’t this bike do?! 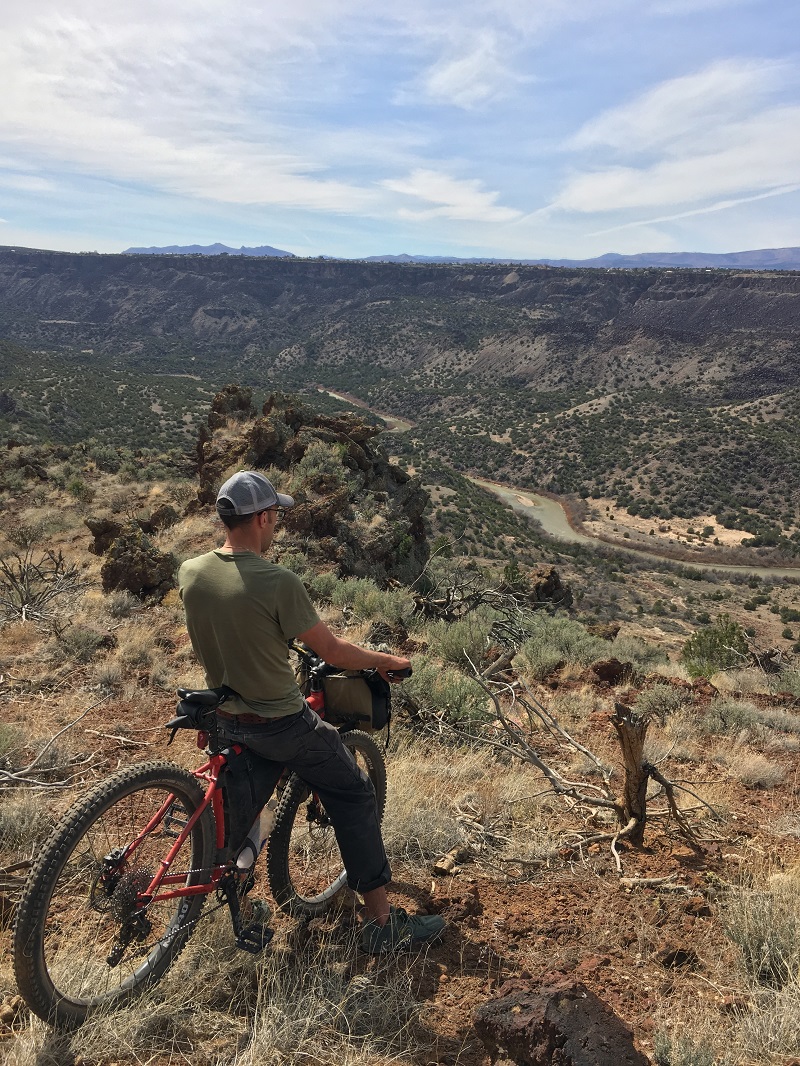 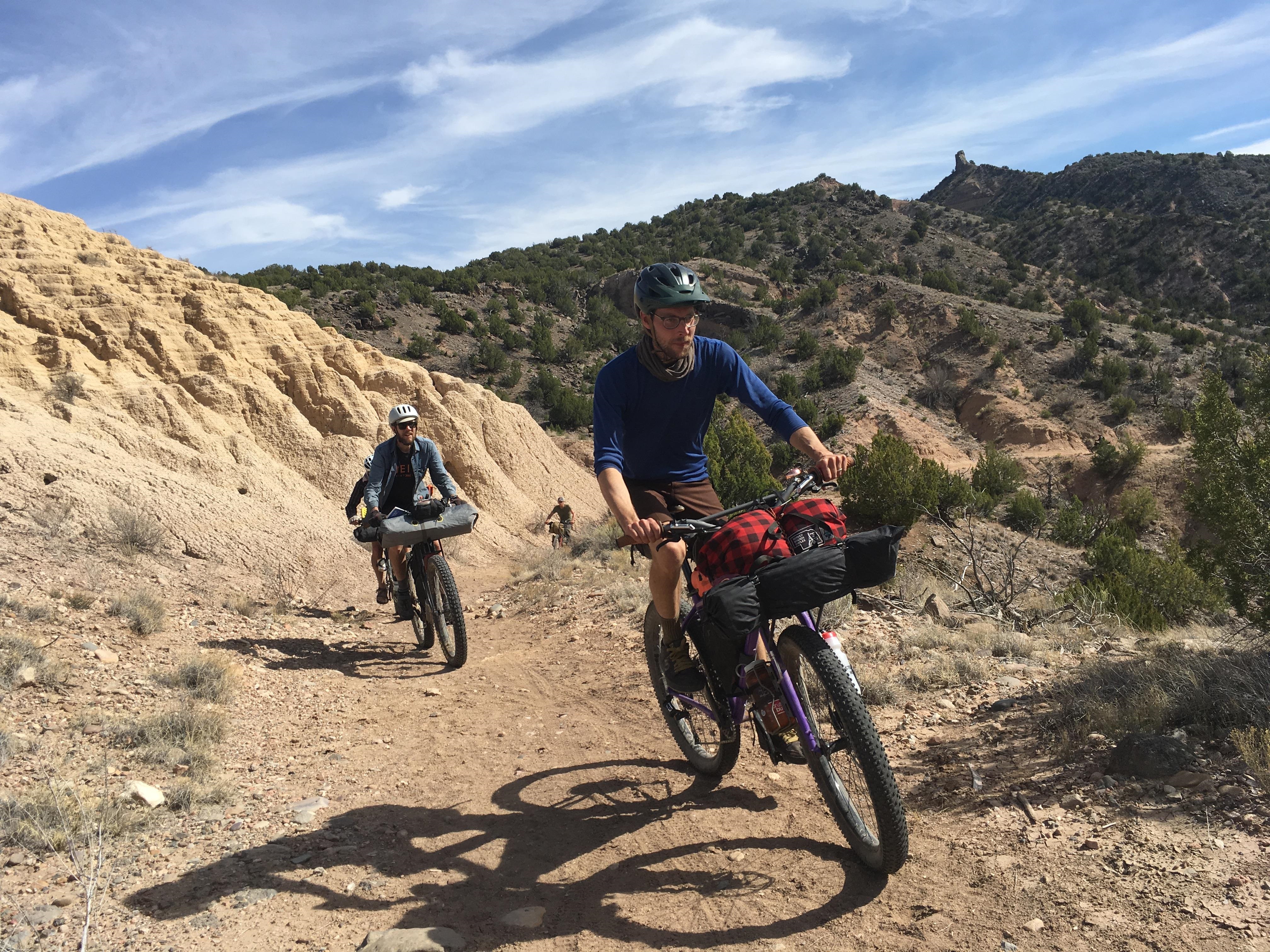 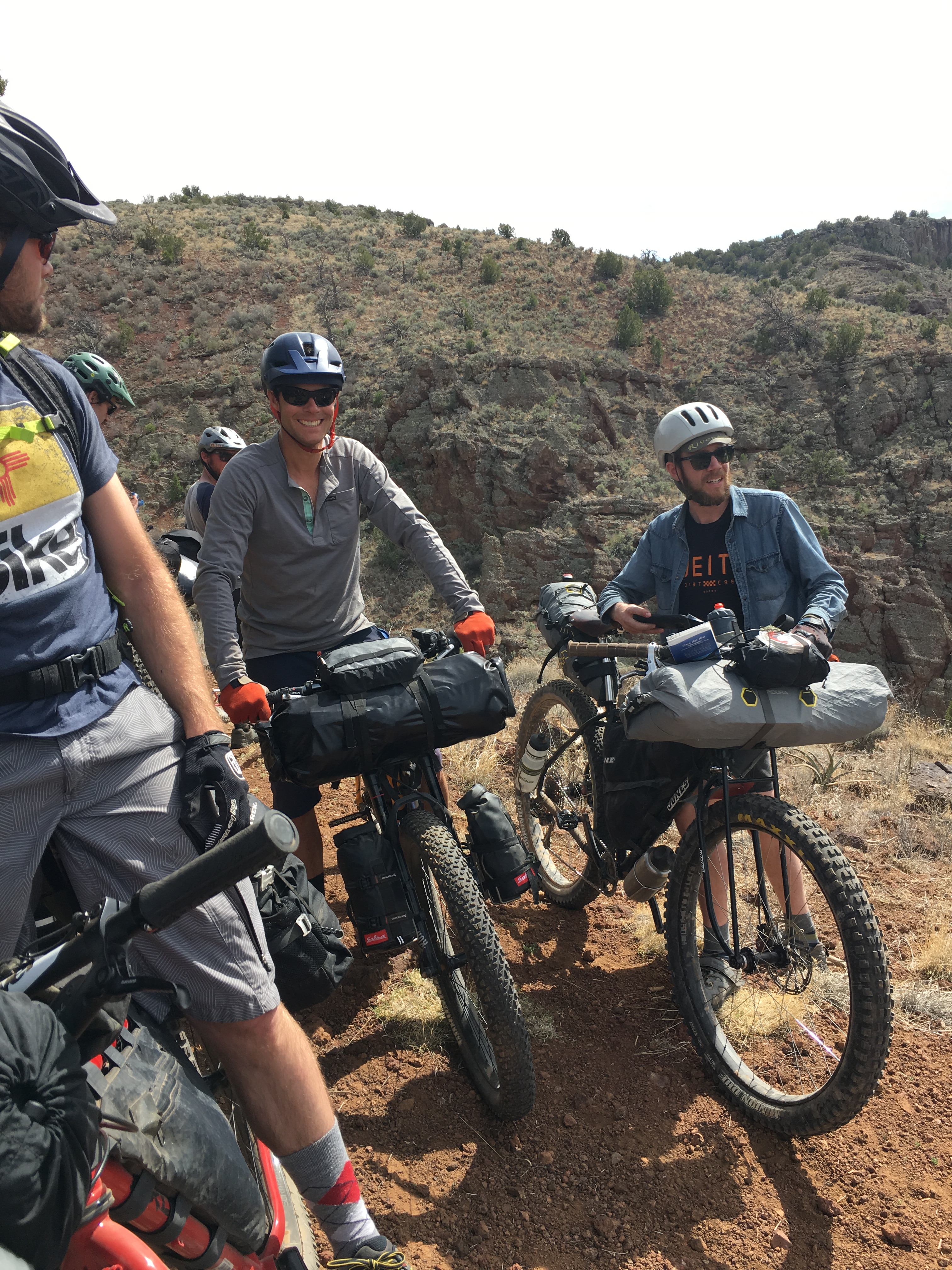 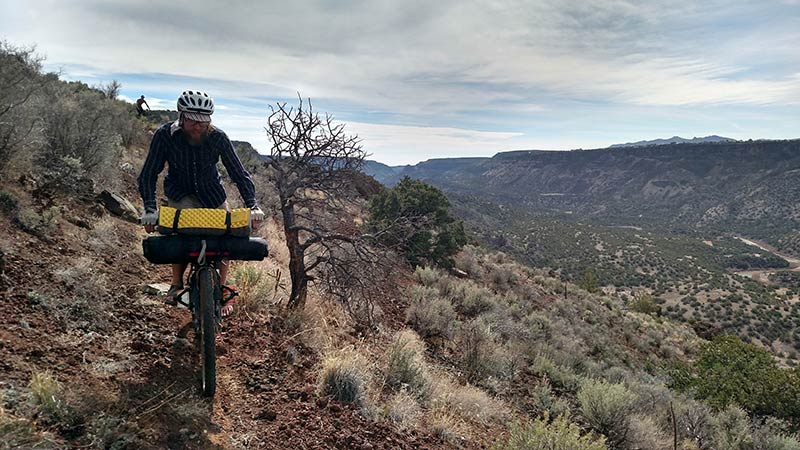 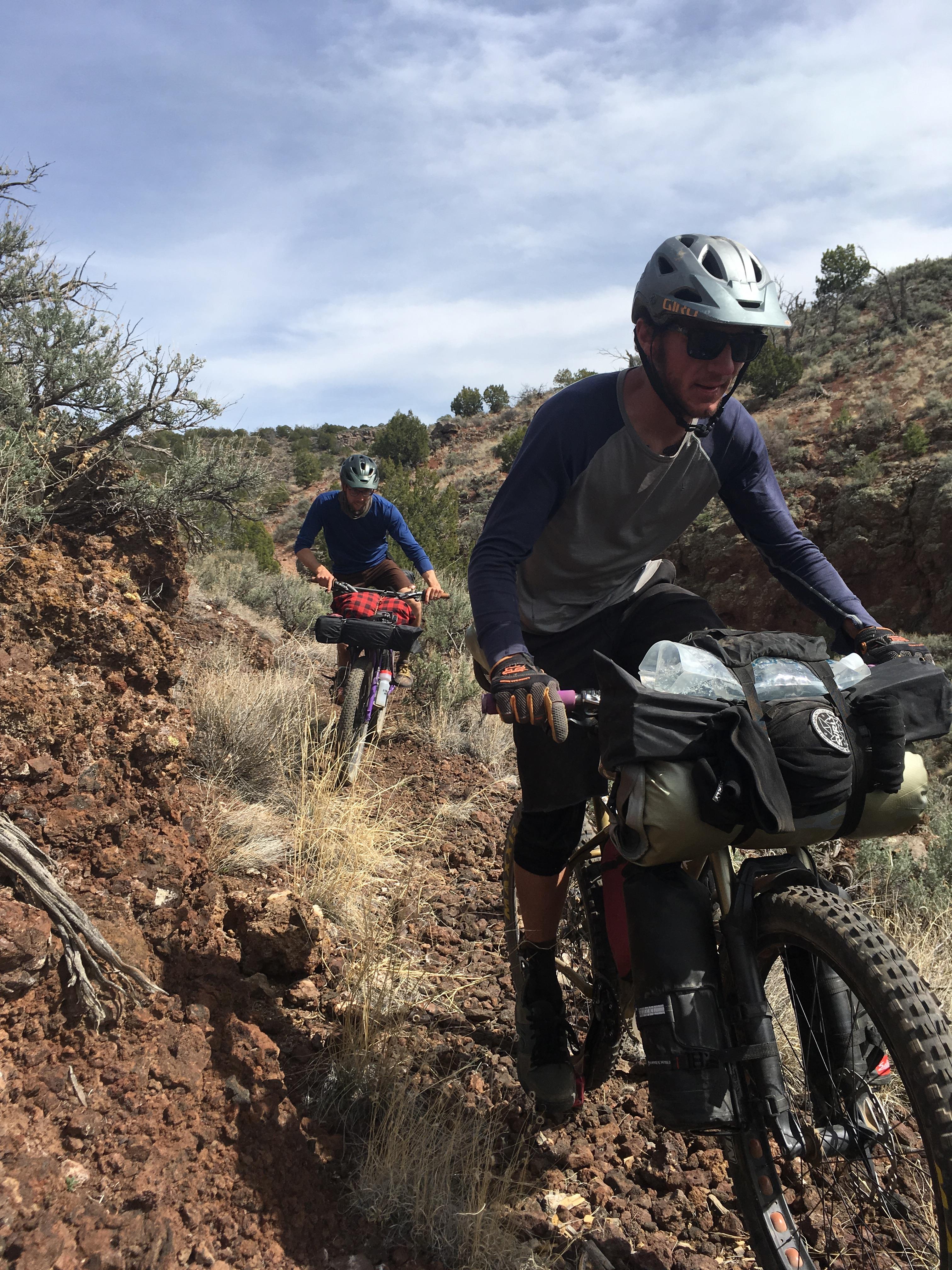 We pedaled on down the canyon NE towards the opening of Caja Del Rio, which would lead us into the sinister shadows of Diablo Canyon where we would camp for the night. I had ridden this arroyo years ago and remembered how taxing it was, even on a plus bike, and was not looking forward to those last few miles slogging through the sand. Luckily our friend Paul had stashed a cooler of barley pops, ice and drinking water off Buckman road, so we filed into the underbrush to rest and enjoy some shade before we pushed on up the road to drop into the Devil’s Canyon itself. We played in the arroyo and challenged each other to ride the boulders and weird lines before settling into a nice soft and sandy clearing for the evening. That night around a modest blaze, we shared the remainder of the beers from the stash and told tales of both stark truth and wild absurdity as the moon rose above those dark walls. I slept in a bivy with a Big Agnus -20 bag and to my surprise, two sleeping pads, needless to say, I, was snug as a bug in a rug. Temps were still chilly to be sure but because my synthetic 15* bag is more like a 40* comfort wise, I thought going overkill would be the better call, Aaaaand it was 😊 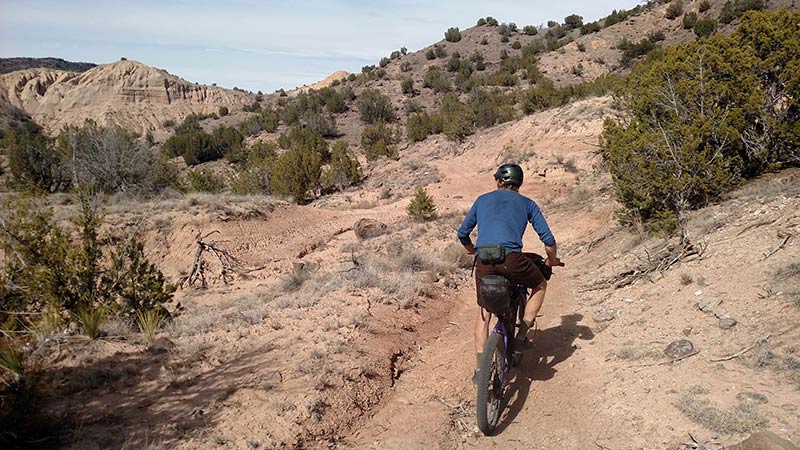 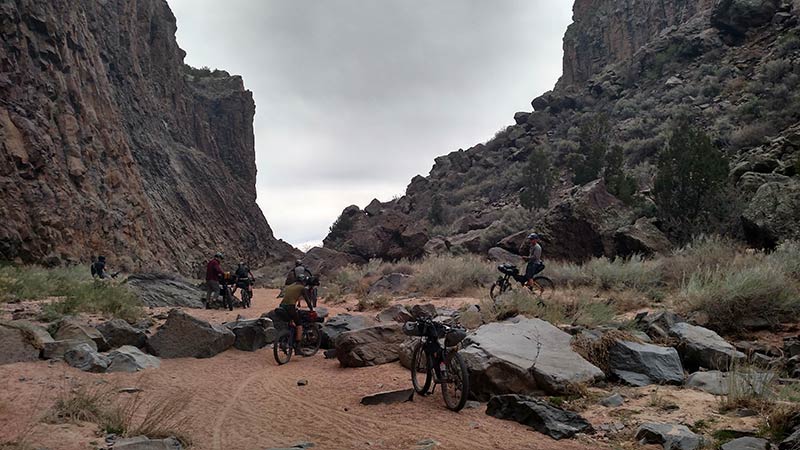 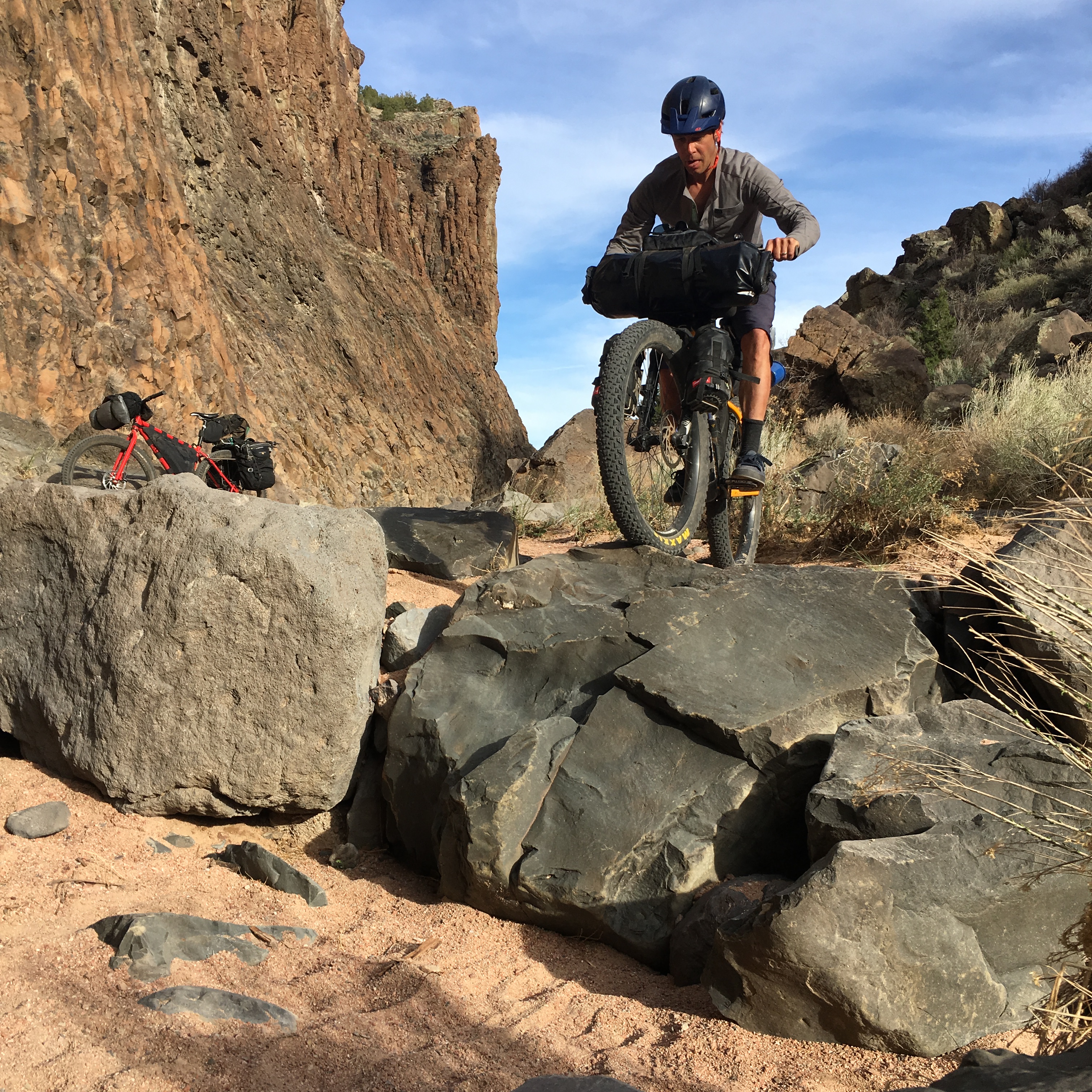 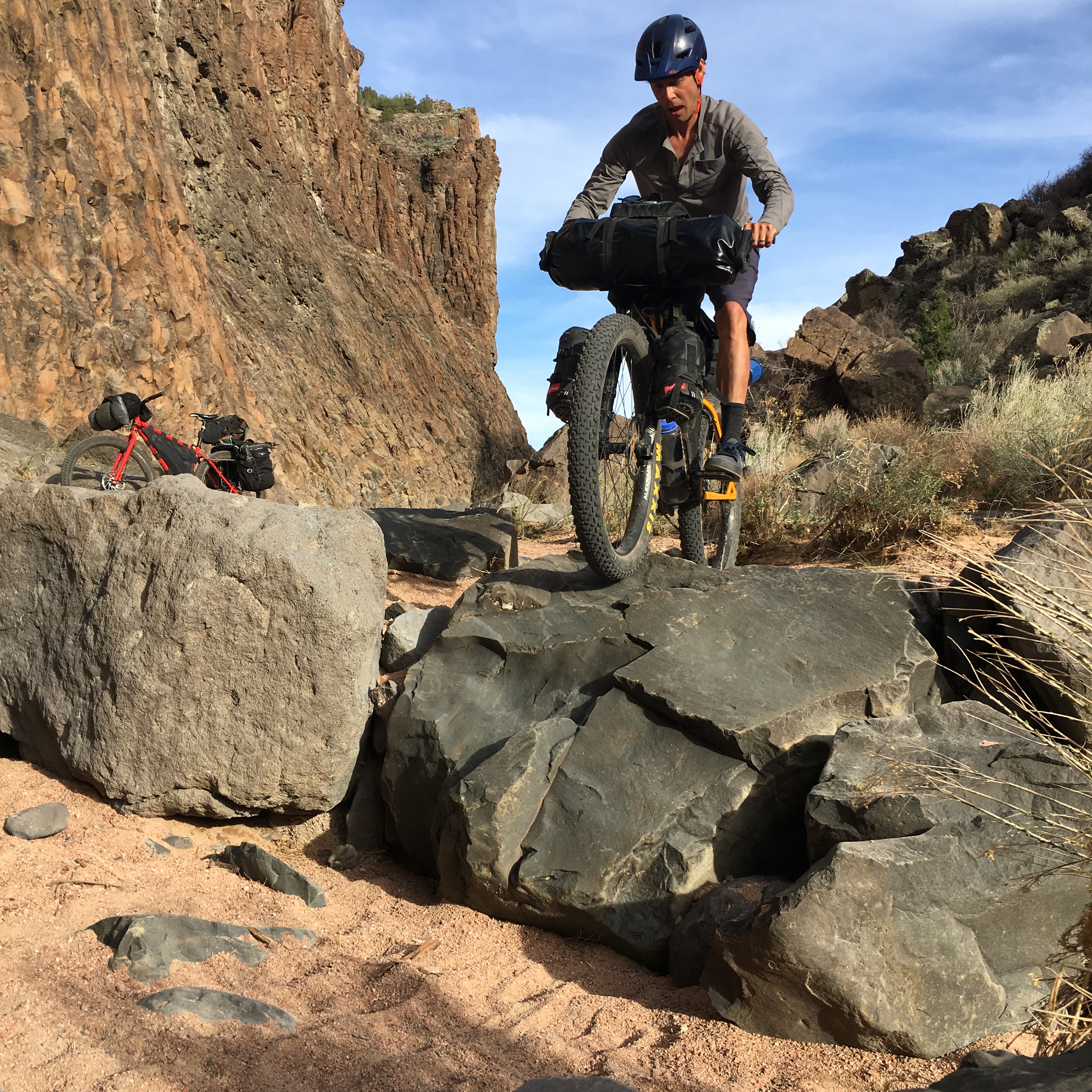 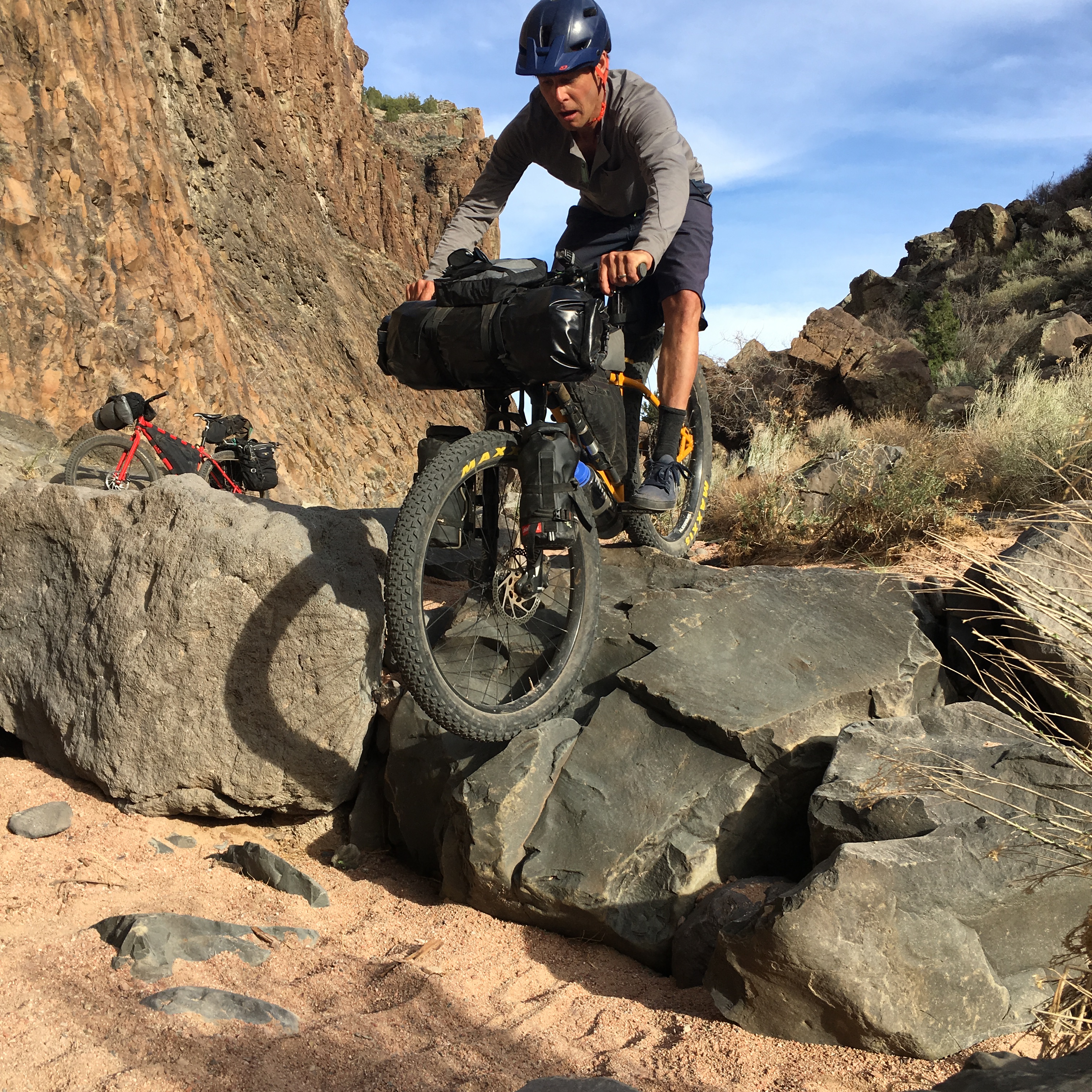 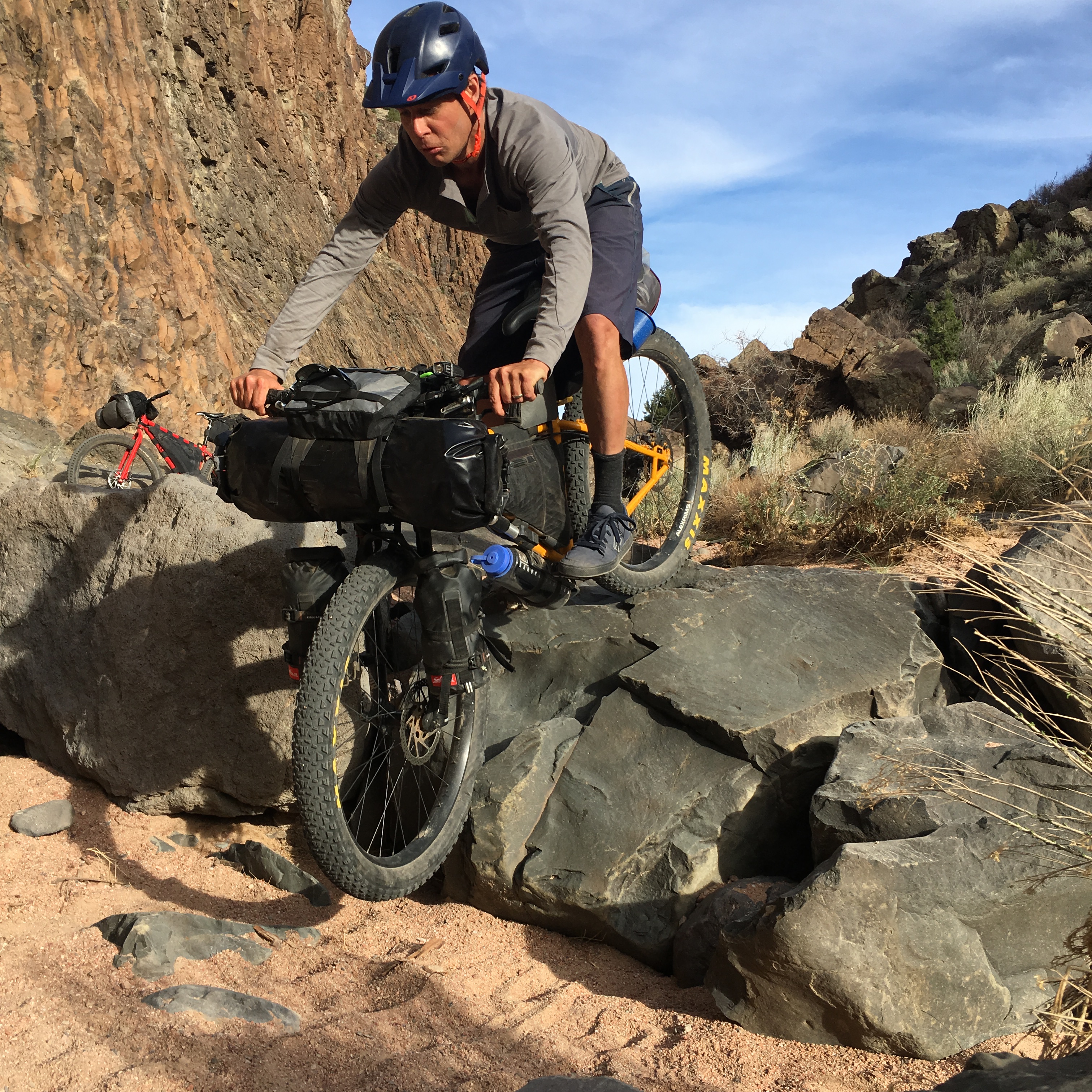 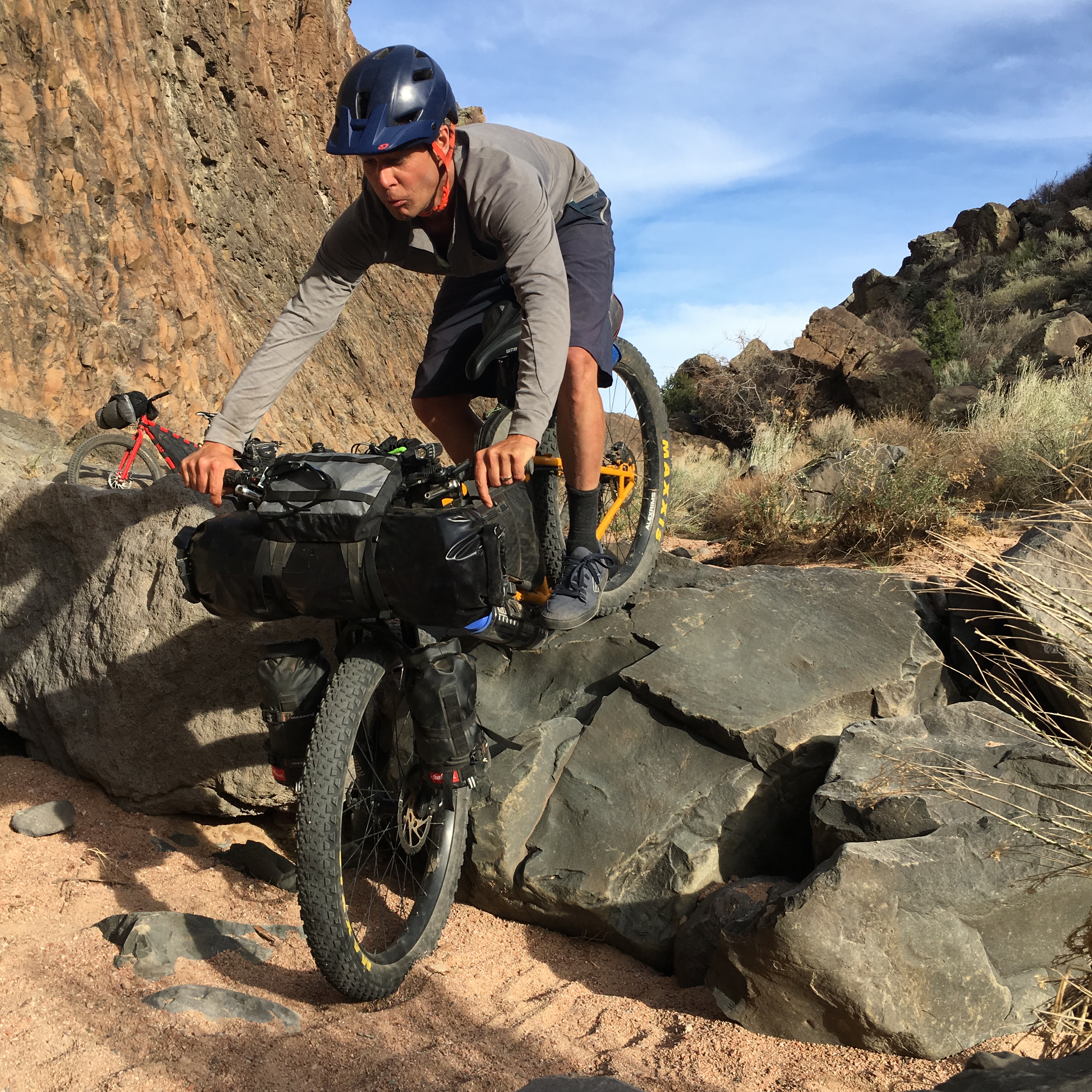 Day 3. The last leg back into town was a trying one that started with the worst slog of shit washboard dirt road I have recent memory of. 8 miles of constant 2% grade uphill on washboard dirt and sandy shoulders, just what the doctor ordered first thing in the morning for my tired legs. The elation when we finished that section and came up to a paved bike path point back towards town was palpable and talk of burritos incited a quickening of pace. We curved through bourgeois suburbs with their perfectly sculpted adobe mansions towards what would be our last taste of single track before arriving back in the concrete jungle. La Tierra trails are a fun place to go shred some dusty corners and practice hangin’ a little air on the mini jump line. We rode said jump line but I’m not sure my wheels ever left the ground. Shortly thereafter we beelined to the burrito spot and installed some much-needed calories, I for one had eaten the last shot block I had an hour ago so I was running on fumes. And that is where we all parted ways, dirty af and all in need of a nap. 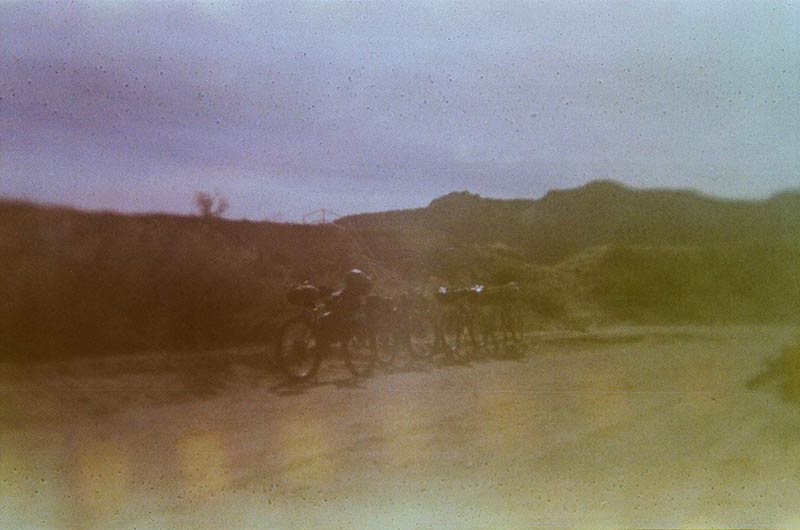 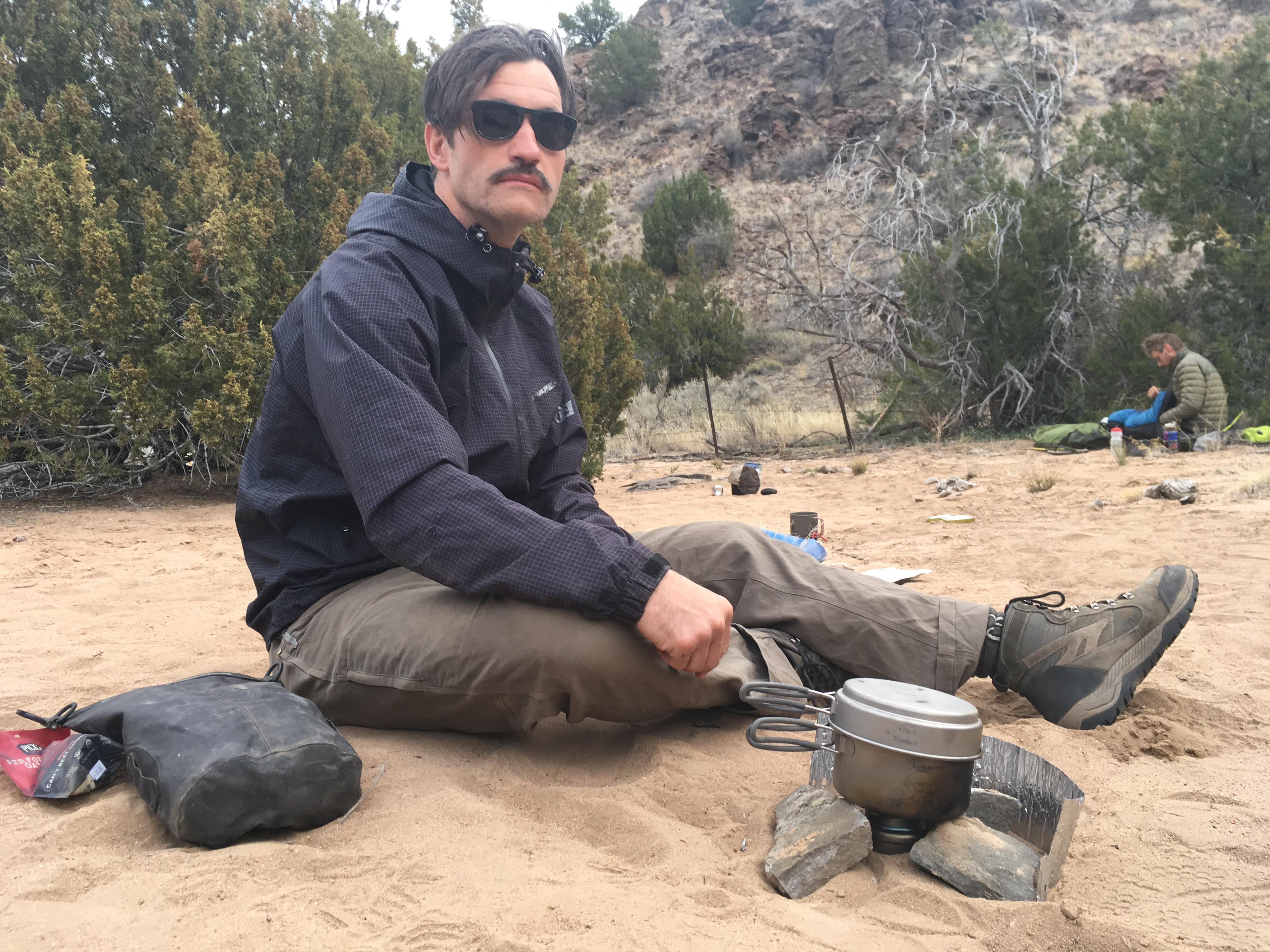 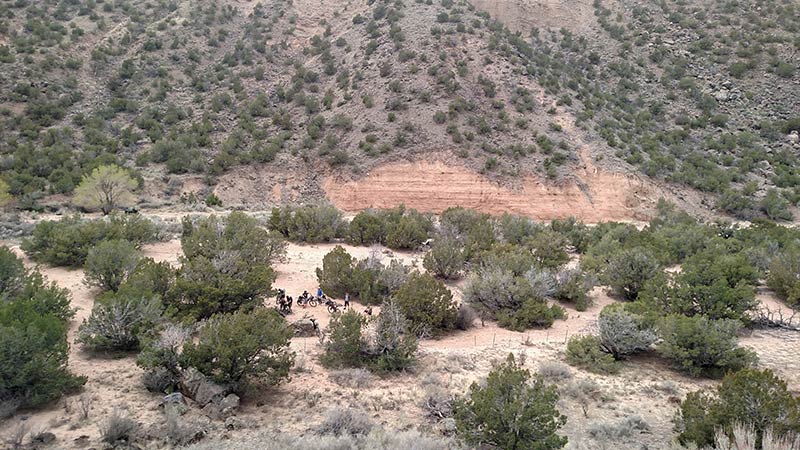 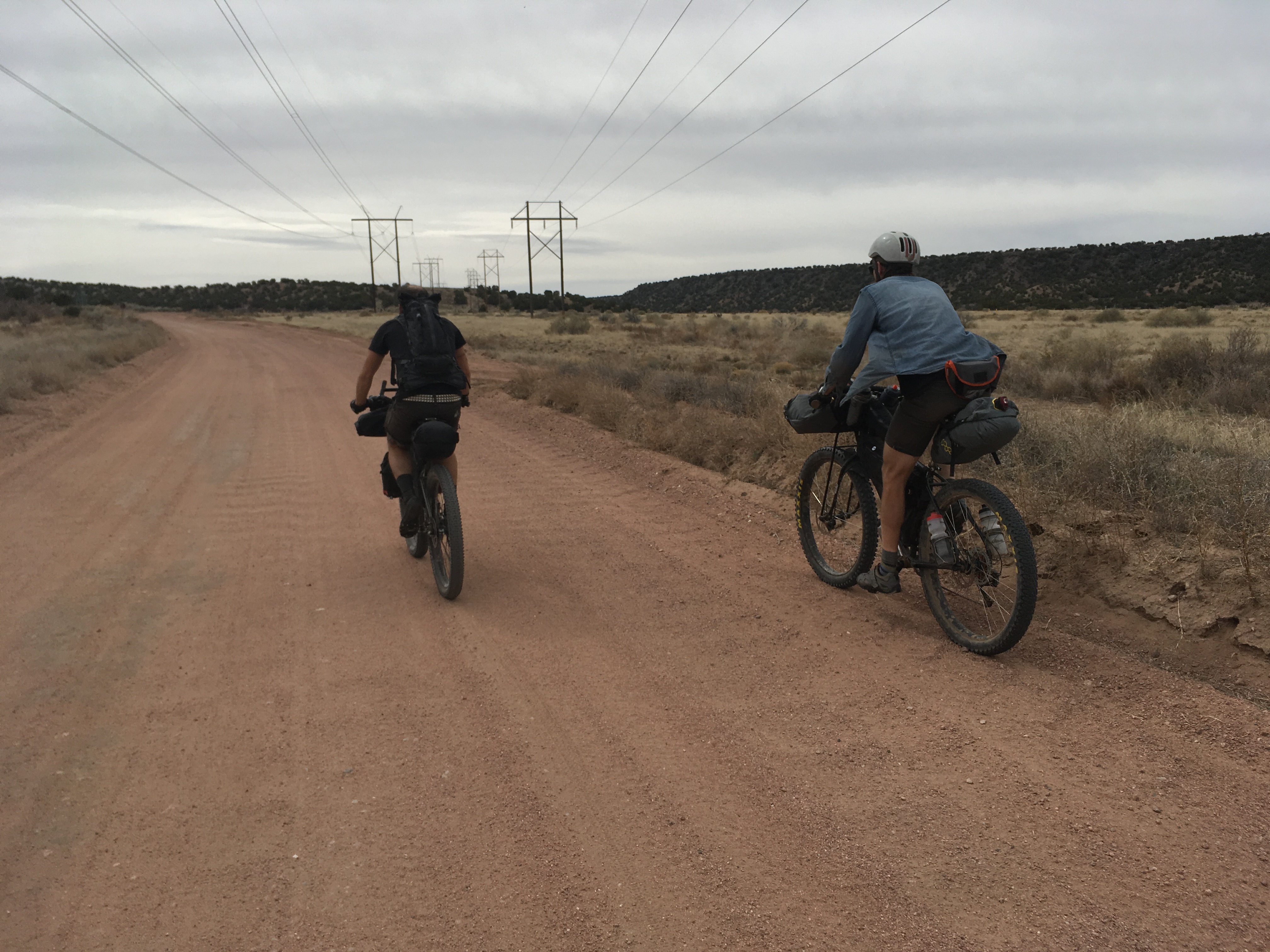 I found a cheap room and ended up convincing Owen to drive us up to the Japanese spa for a soak in their amazing outdoor hot tubs. I then met back up for dinner with Mike, Owen and the Broken Spoke crew for a New Mexican feast as our parting “thank you” dinner from the brand for being such a kick ass promoter of the brand and all around excellent people to do business with. Big time thanks to everyone who joined us both days and especially Mike, Owen, Jett, Nate, Paul, Rusty, Adam and Donald for making it for the long haul. You guys are a blast to adventure with. Until next time!

And I leave you with this apropos song just because being decidedly uncool is very amusing to me: