Tales From the Road: The Whole Kielbasa

This installment of Surly Ambassador ‘Tails from the Road has us traveling to the South East US on Surly’s Whole Kielbasa Loaded Touring demo tour. New to the brand is the official Surly demo van, a brand-spanking-new Dodge Promaster 3500.

AKA: The War Rig. 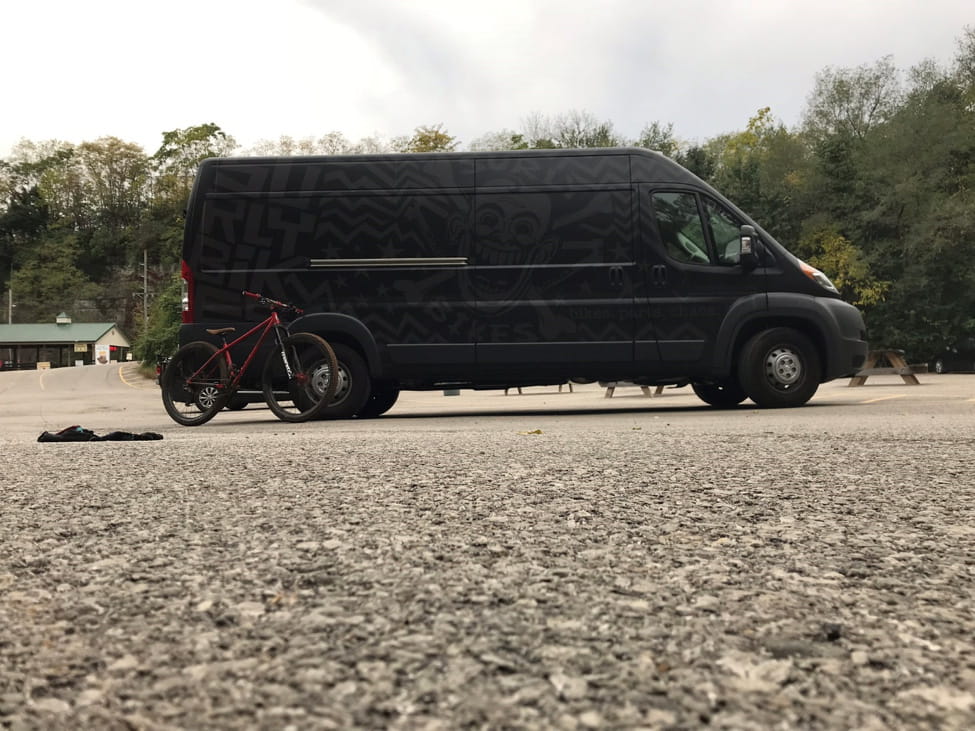 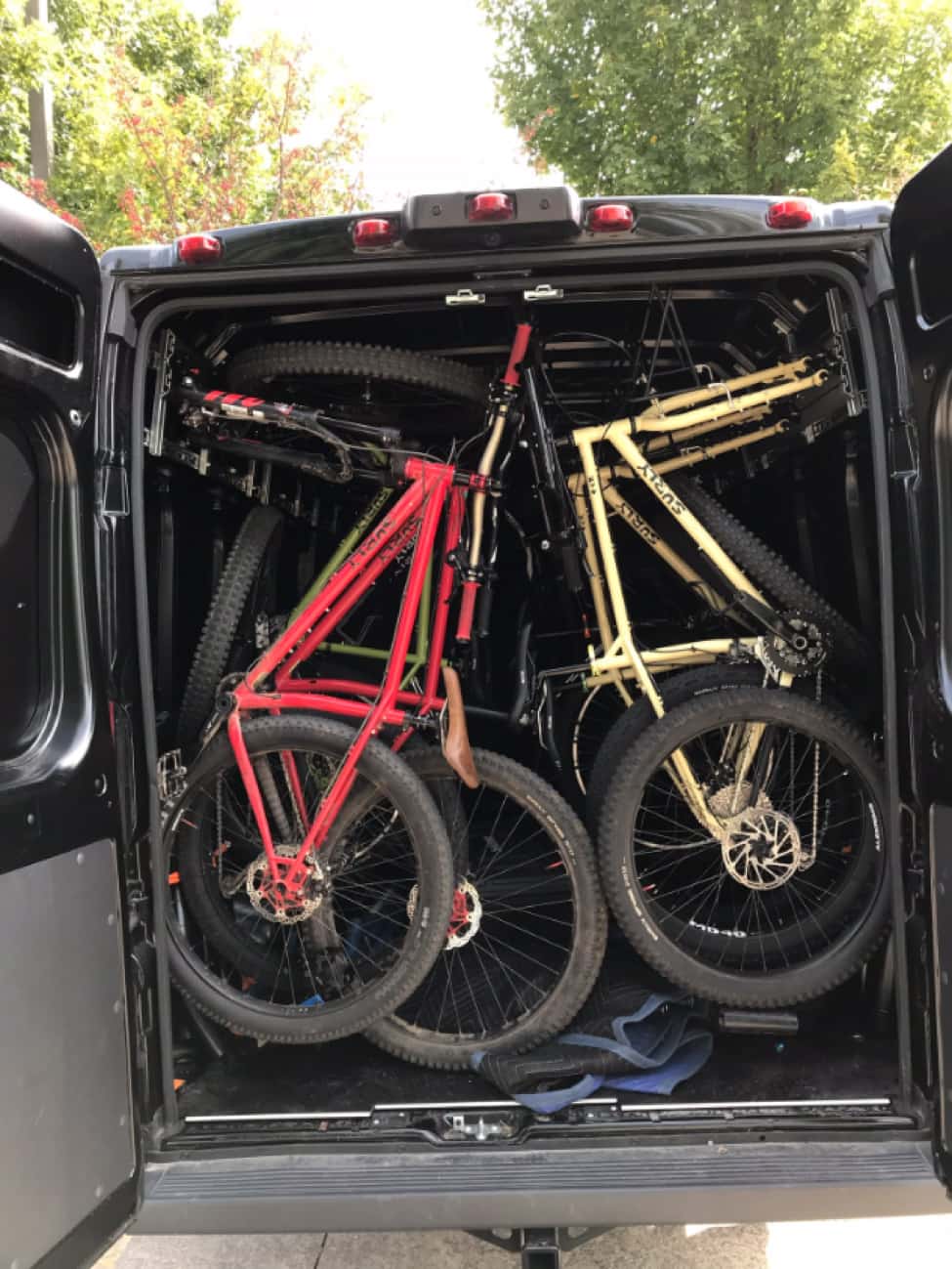 The trip takes us to from Intergalactic Surly HQ to Indianapolis, down to Ashville, over to Raleigh, followed by Atlanta, and then on to Nashville, then home. Total mileage for the trip would register in at just over 3,000 miles resulting in three shop clinics, one festival, one sub 24 bikepacking trip, one shop party/demo and a partridge and a pear tree.

The destruction that ensued is documented as follows:

Stop One: Indianapolis, IN

This was my first swing at doing an in-shop clinic. The Clinic, dubbed Loaded Touring 101 focuses on the basics of bikepacking/commuting/touring. For the clinic, I decided to keep these three topics synonymous with one another as in execution they are all the same. Gear, Destination, Human. The premise was simple. It’s just the details that are different, and I decided to keep the clinic at a macro-level examination of Loaded Touring.

Chris Wiggins, owner of A1 sprung cash for some killer BBQ down the street and local brew. 26 people showed up, and stayed for the entirety of clinic, with an inclusive QnA session at the end. The entire evening clocked in at just about 2 ½ hours, all the food was consumed and all 6 gallons of beer was drunk. Success!!

Chris runs a great shop here in the NASCAR epicenter that is Indy, and I highly suggest stopping in if you are ever in the area. If for no other reason, stop in give Chris a high five and grab some coffee beans from local favs Tinker coffee as well. If you ask nicely, Chris might even let you scope out one of his killer custom Surlys he’s been rocking for some time now. If not, here’s what you are missing: 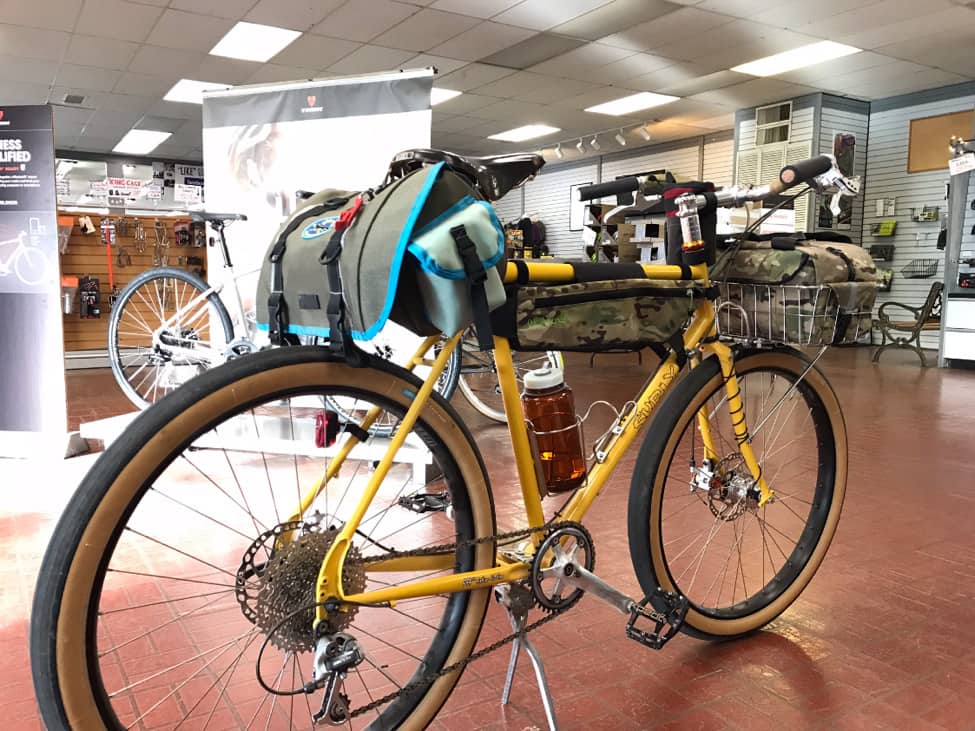 One thing I wanted to accomplish when I signed on at Surly was to get more exposure to our Trail line. Since my start, I’ve focused my events on NEMBA Fest, Dirt Fest and Pisgah Mountain Bike fest around my shop visits. I am very passionate about our Trail products, and think that as the good people of Earth tire of the expense/maintenance/marketing BS behind full suspension, they will become ‘woke to our steel story. I love riding hardtails off road. I love the real-time trail feed from my hardtail. I love the pedaling efficiency of a hard tail. I gives me sense of connection with what I am doing.

Increasingly more people I meet at demos have been brain washed into thinking that full suspension is needed for all mountain biking. Often, riders came back saying something like “I didn’t know I could ride those trails on a rigid/hardtail bike!”

Beit Allegrippis, Kingdom Trails, Dupont, or Pisgah, this response has resonated throughout my demos.

Pisgah Mountain Bike Festival was located at the Oskar Blues Reeb Ranch. A beautiful farmyard with a big white barn that would be the stage for live music and food for the weekend. The riding was fantastic, and the trails were perfect for what we brought out there, (Krampus, Karate Monkey, ECR, OGRE, Troll) Which, made it easy to make new believers out of the false-carbon constituents.

We met a lot of new friends, drank more than our fair share of Oskar Blues beers, and converted some new members to the church of 4130 with our steel gospel.

This event also gave me the opportunity to sleep in the new van and try out the new demo weights. Bad ass, huh? 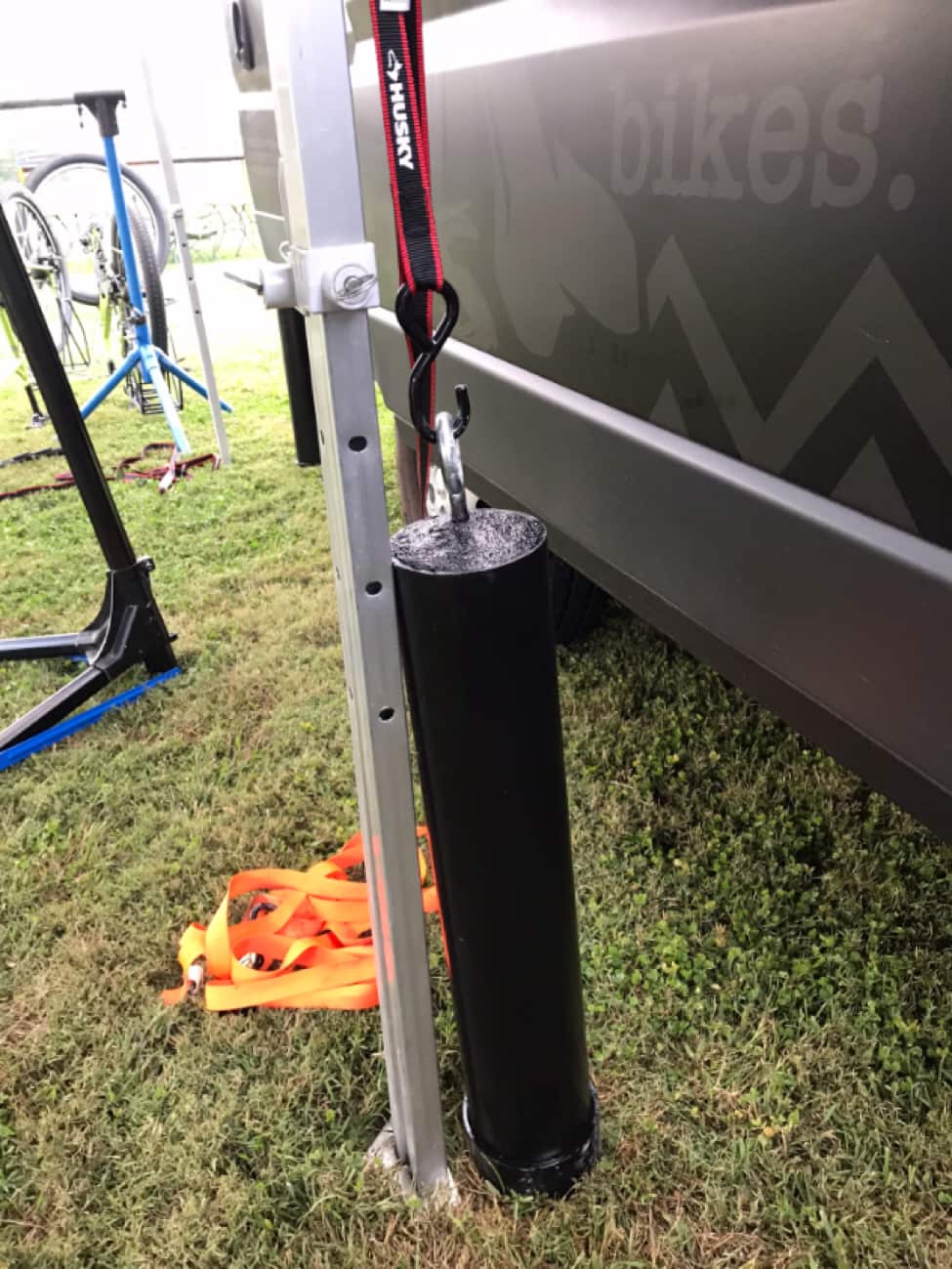 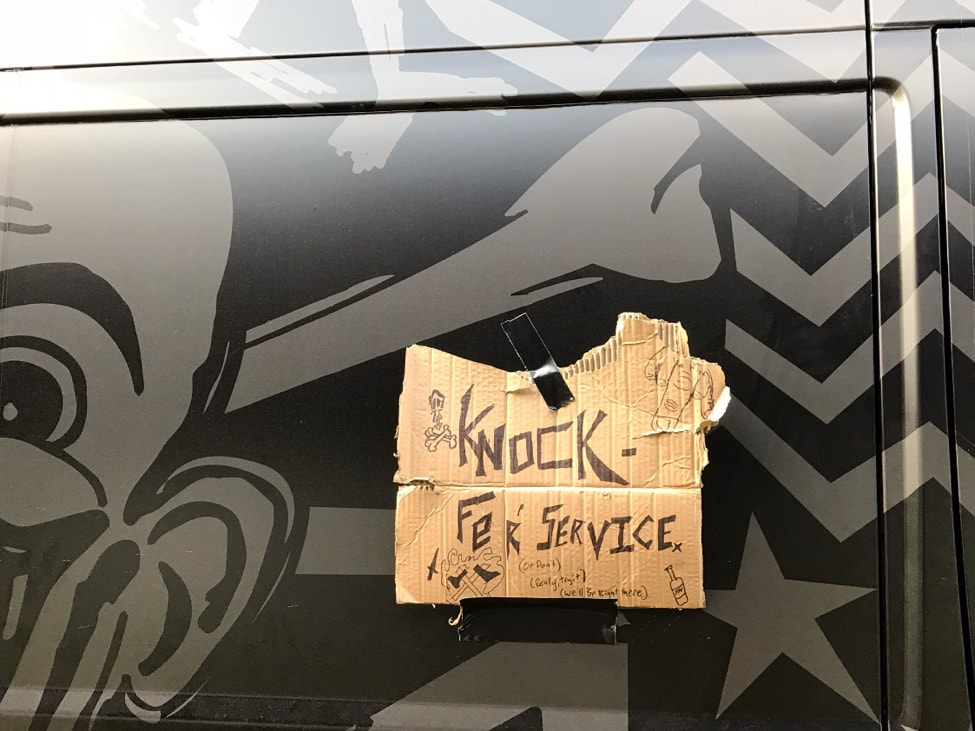 No seriously, keep knocking. I’ll be right there. Gone Riding. 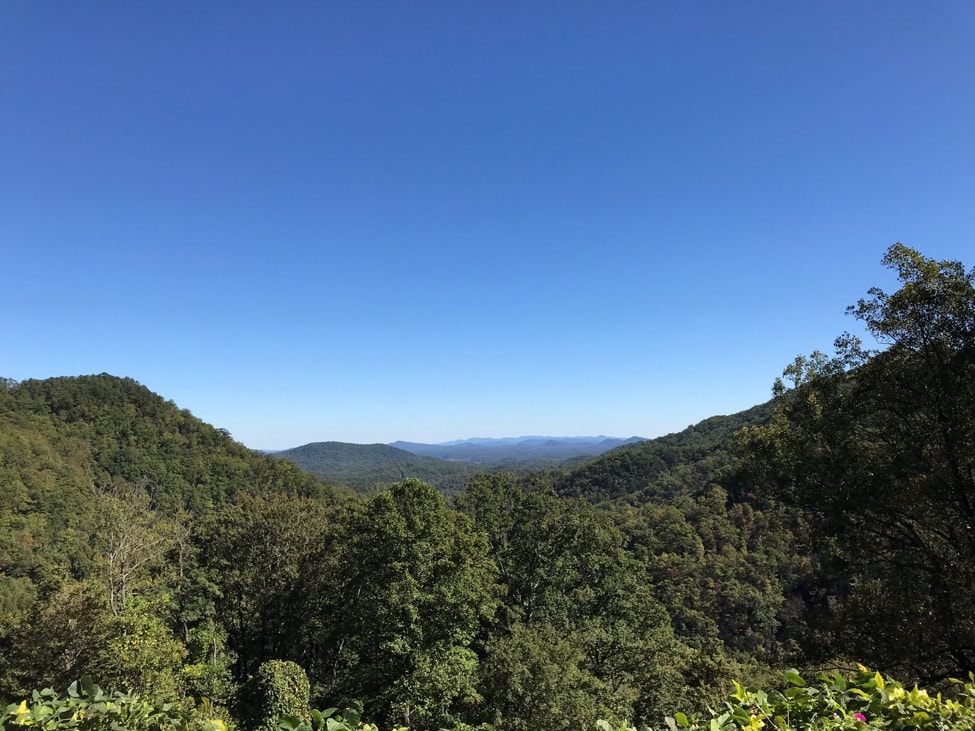 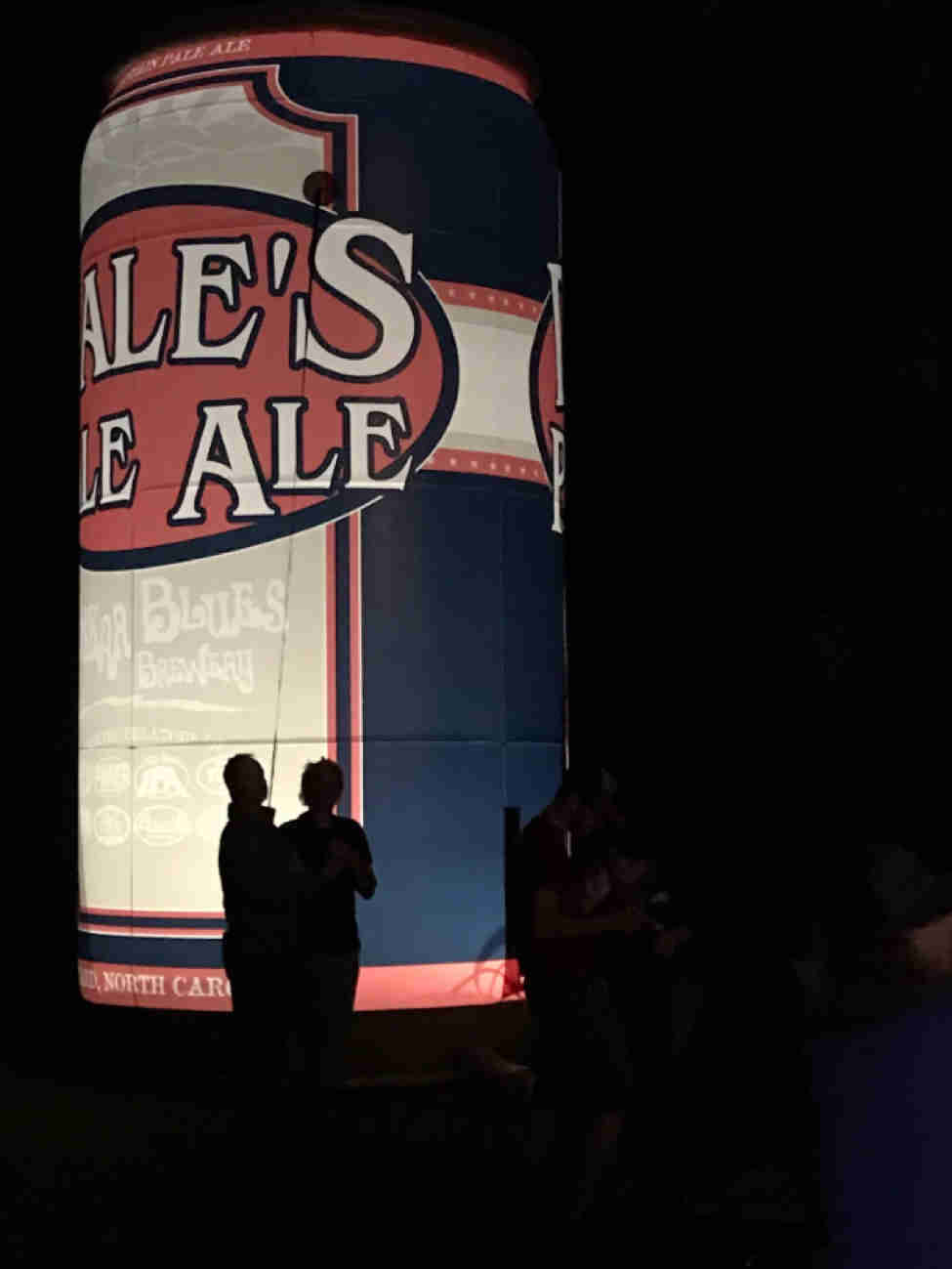 The following Monday, I stopped by Motion Makers to say high, buy them breakfast biscuits, and talk Surly. Motion Makers does well speaking Surly in this area. One intrepid Surly super fan came by just to show us his battle armor. Seriously. Fucking battle armor. Made from 4130, natch, he decided to start crafting his own armor after a lance pieced (Yup, I said pierced!) his shoulder. After saying good bye to the forge master and crew at Motion Makers, I packed it in and prepared myself for my next stop. Raleigh. But first, what would a trip to Ashville would be without stopping at some breweries?

This is the only documented proof of that night, and might I say, it’s proof enough of how things went for the evening. 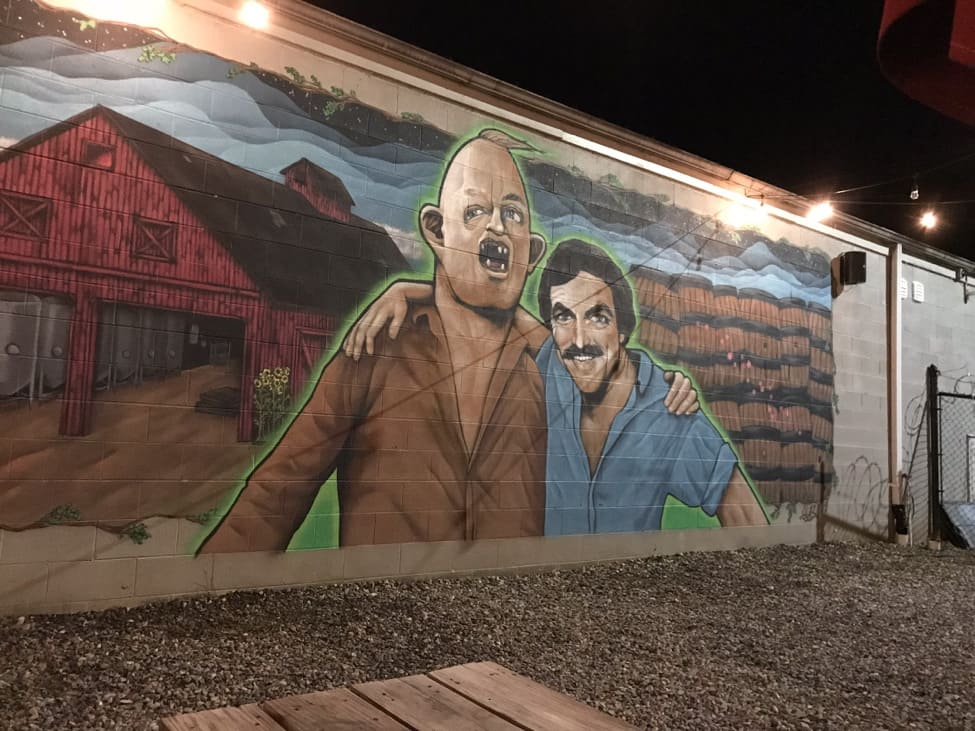 Known as the “City of Oaks”, and home to own of our favs, Oak city Cycling Project, or OCCP, not to be confused with OCDP (Orange County Drums and Percussion)

This stop marks the one year mark for me on the road with Surly. My first trip had this stop on it, and this was my first follow up stop since. It was great to see Jared and the gang here, as they are always super positive, and really speak the Surly story well. For those uninitiated, OCCP was featured in a shop call out in the fifth installment of our Intelligencer for being a rad group of righteous dudes. (dudes being non-gender, of course)

I did another Loaded Touring 101 clinic here to a great group of participants. Jared got to break in his new burn barrel. (He was sooo excited to try it out) 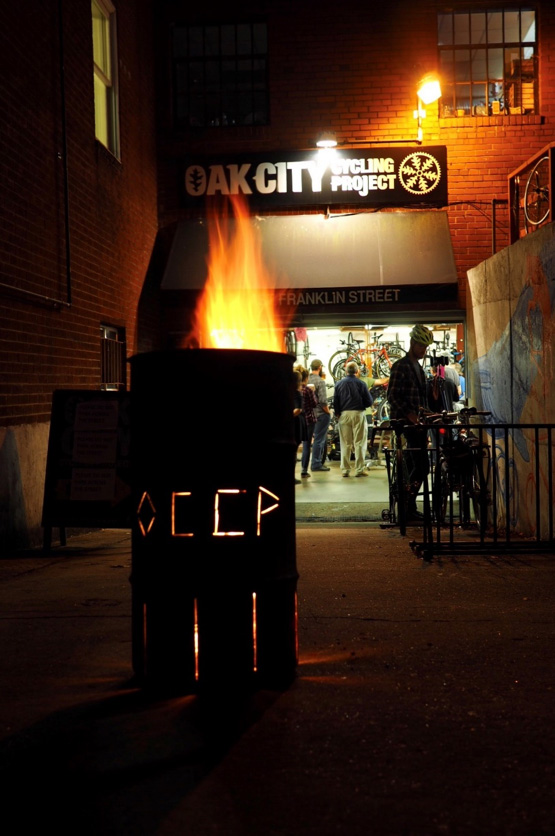 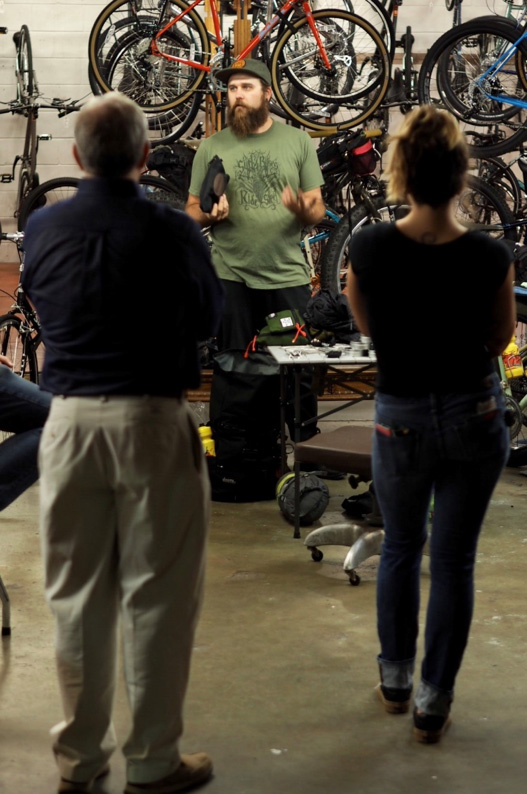 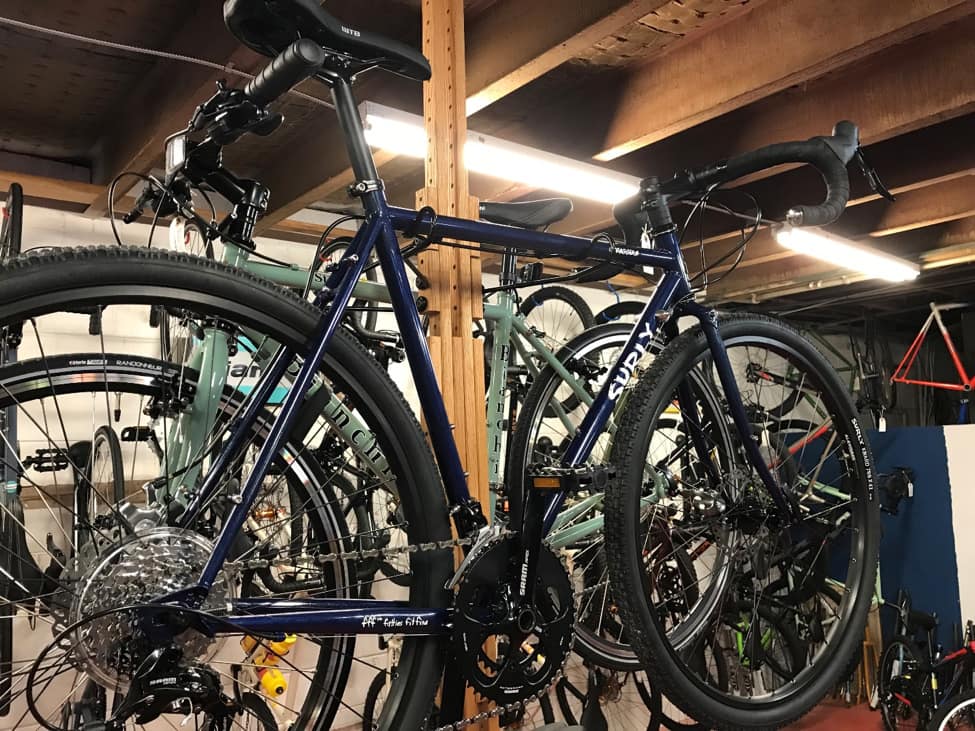 Have you seen that new Straggler color yet? 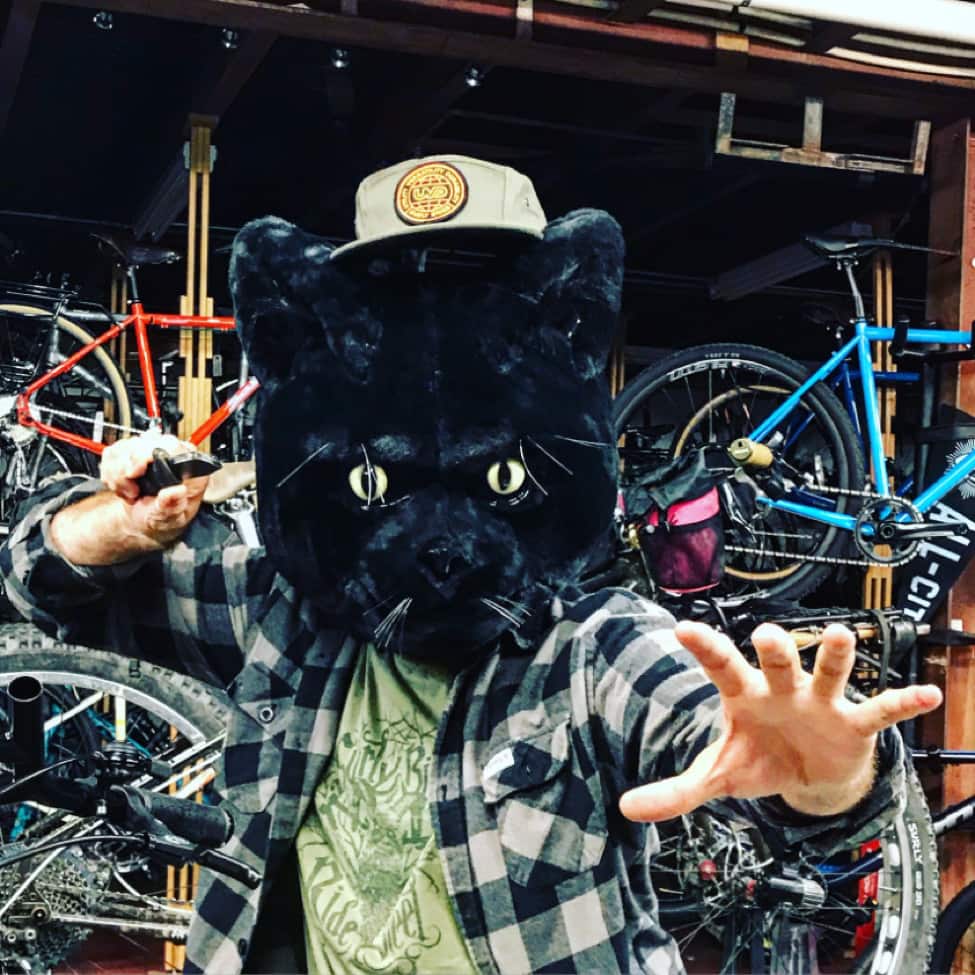 Just hanging onto Grant Park like a hair on a biscuit, you’ll find Atlanta’s very own Loose Nuts Cycles. Owner, Chris Tavel and his crew of impassioned velocipedalers, have dug into a shop space on the bustling north side of Grant Park. Just south of downtown Atlanta, they do well selling our steel to the true believers of the greater Atlanta area. I like coming here because it’s always a wild ride for Surly and for me, that’s saying a lot. There’s also a killer pizza place across the street that will quench the worst of munchies. 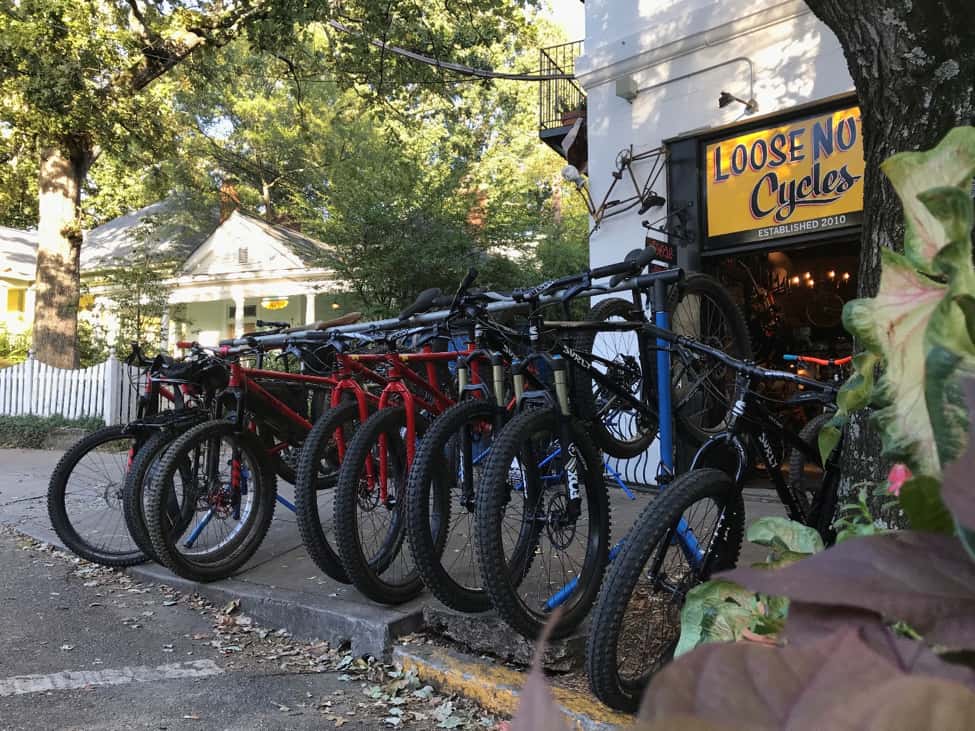 Friday nights here usually mean after hours’ shenanigans, which definitely was the case here. We posted up just outside the front doors with our wares, and demoed bikes to as many random passerby’s we could persuade. 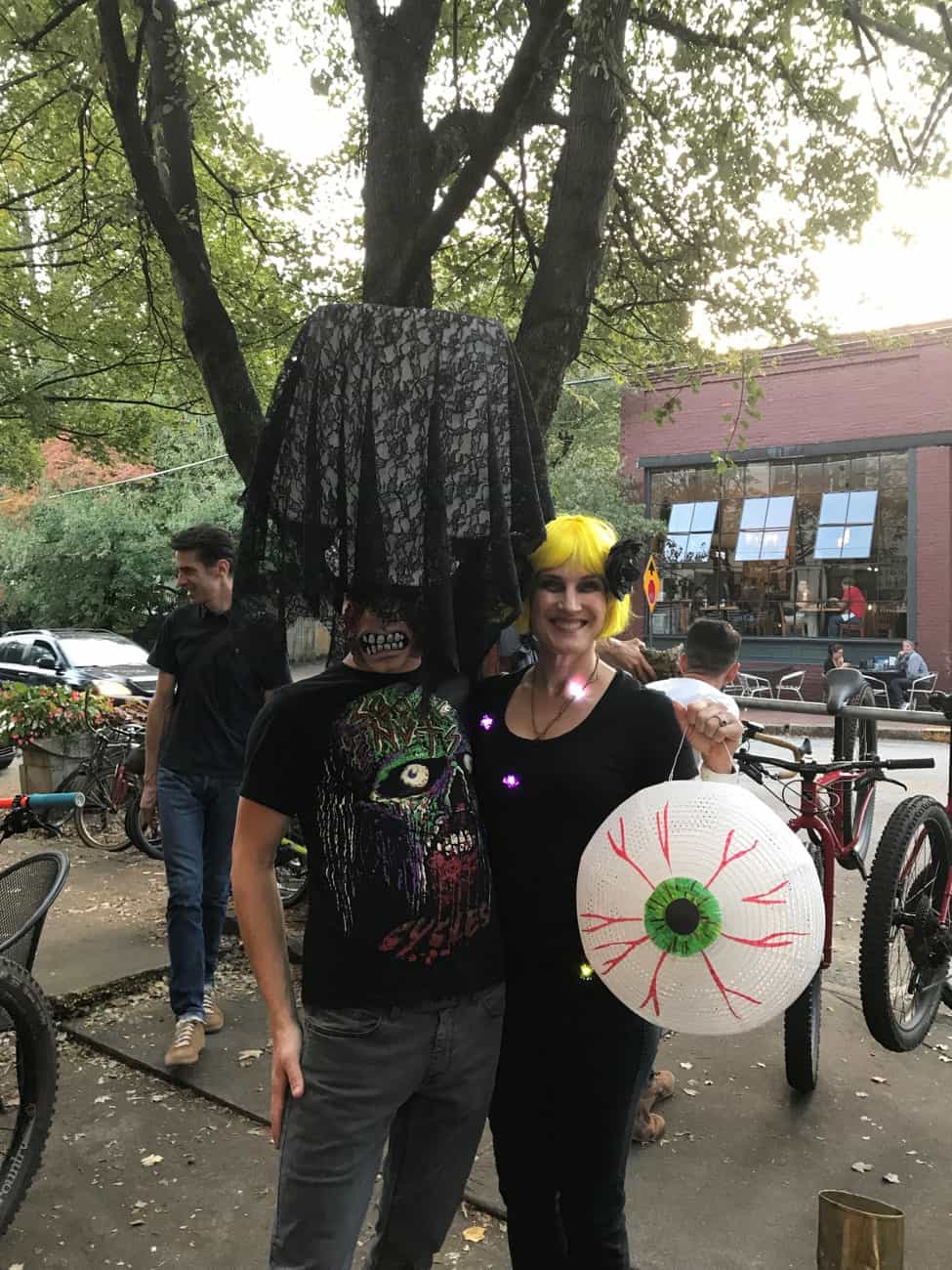 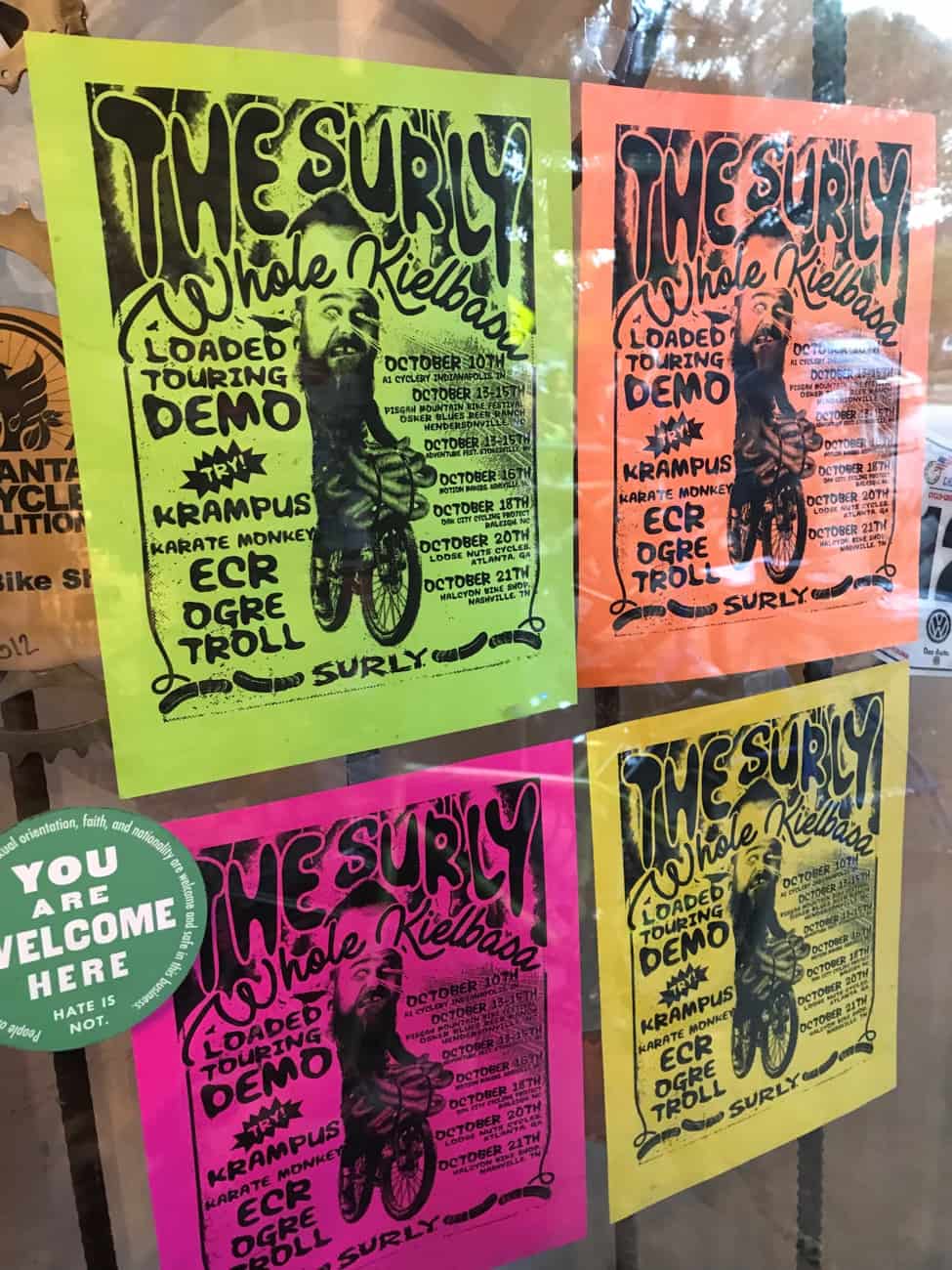 True to the tour name, Chris fired up the ‘barbie with you guessed it, Kielbasa rope. (I love it when a sausage is sold in lengths of rope) The waft of charred tube steak caressed passerby’s nostrils as riffs from our jam box scared the uninitiated and the night rolled on. Two extra sport drink runs were necessary as our slingshot competition heated up and the sun disappeared into the western horizon. 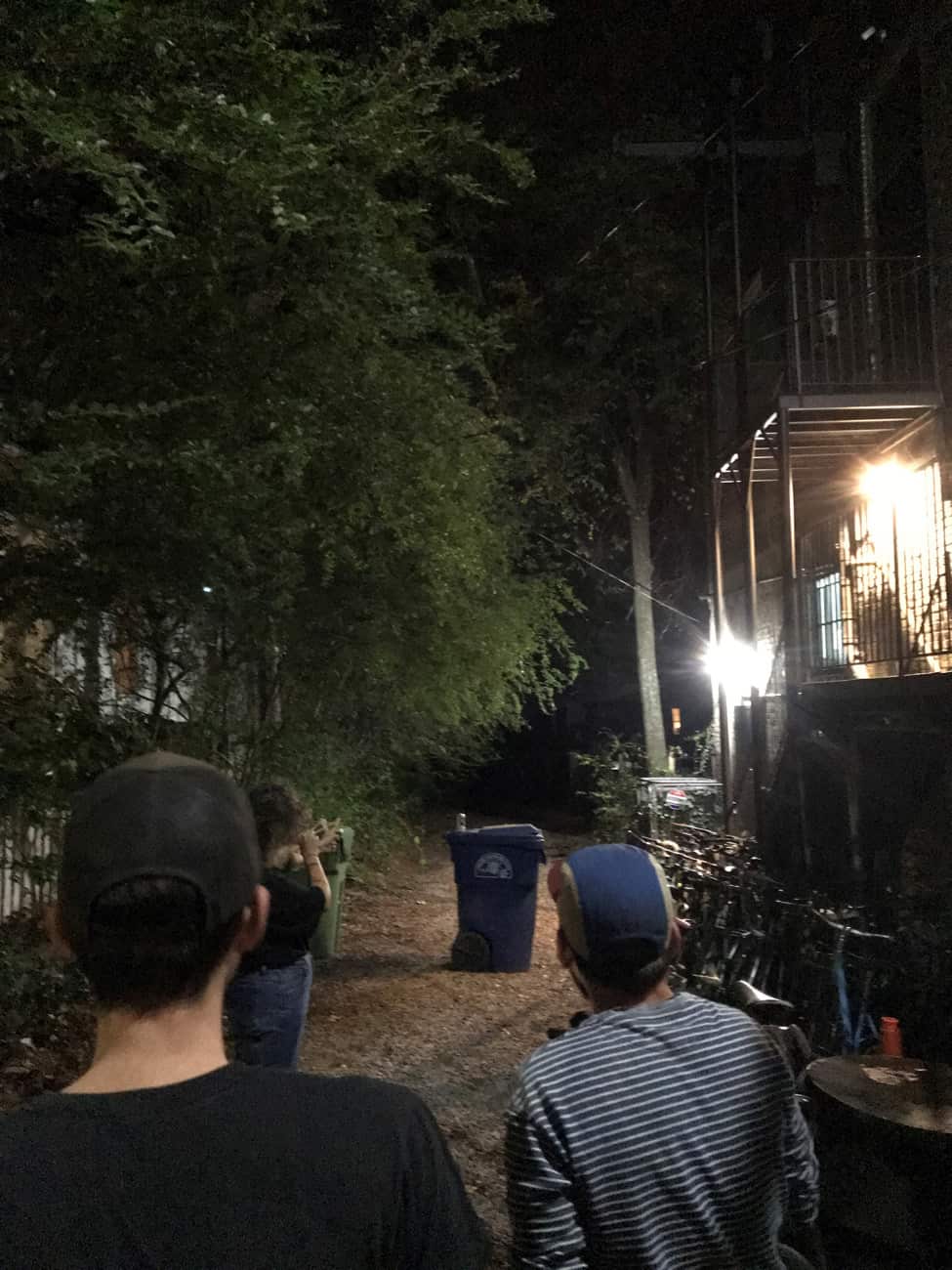 We even had one happy customer stop by and pick up this shiny new Karate Monkey. Happy New Bike day, thumbs up! 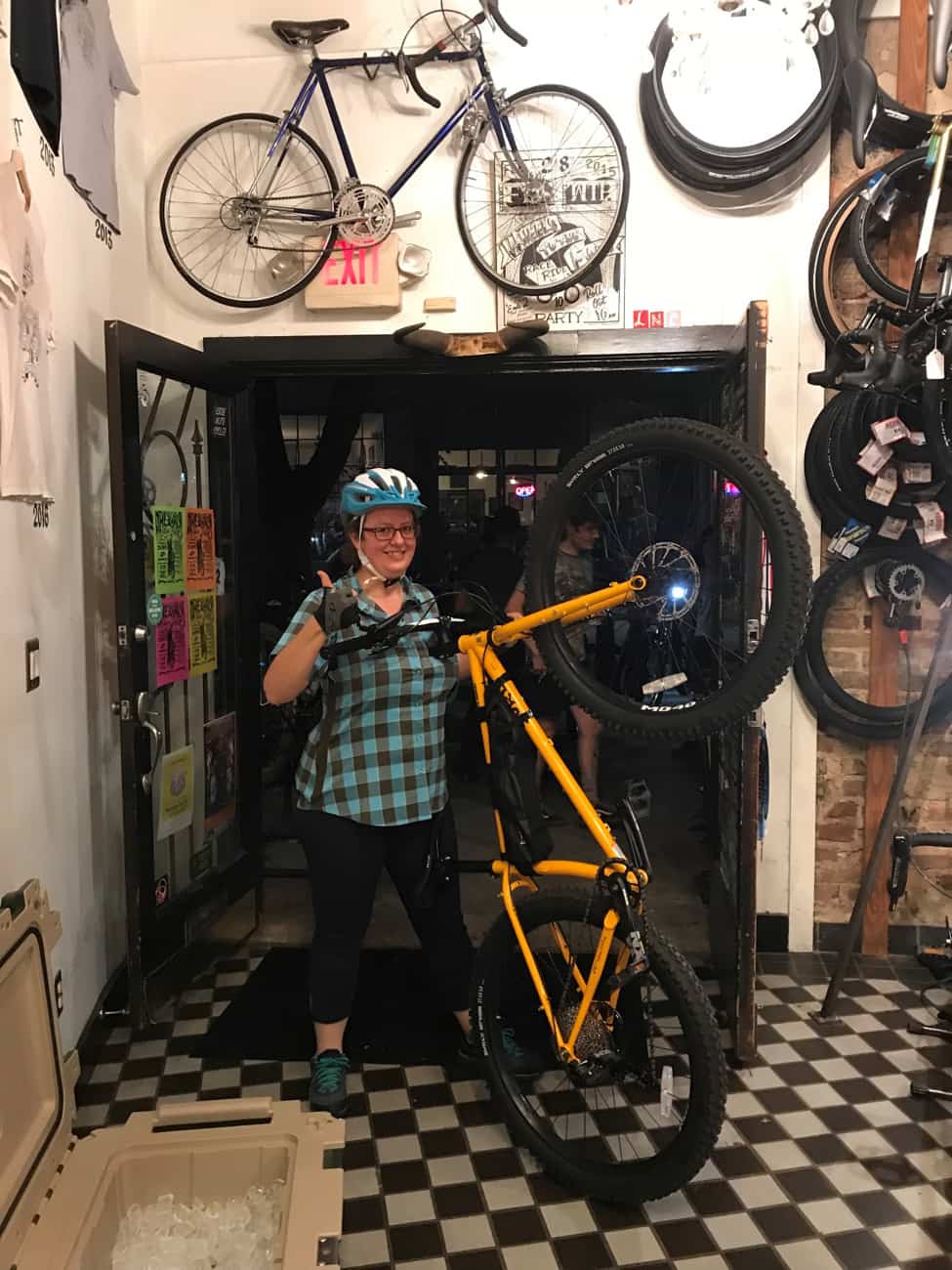 Unfortunately, the cops eventually showed up. Fortunately, for my employment, this cop was a  Surly Super Fan and just wanted to hang out after his shift and scope the new bikes. I tried to trade him a Krampus for his piece, but he wasn’t having it. (i.e. We didn’t have his size) 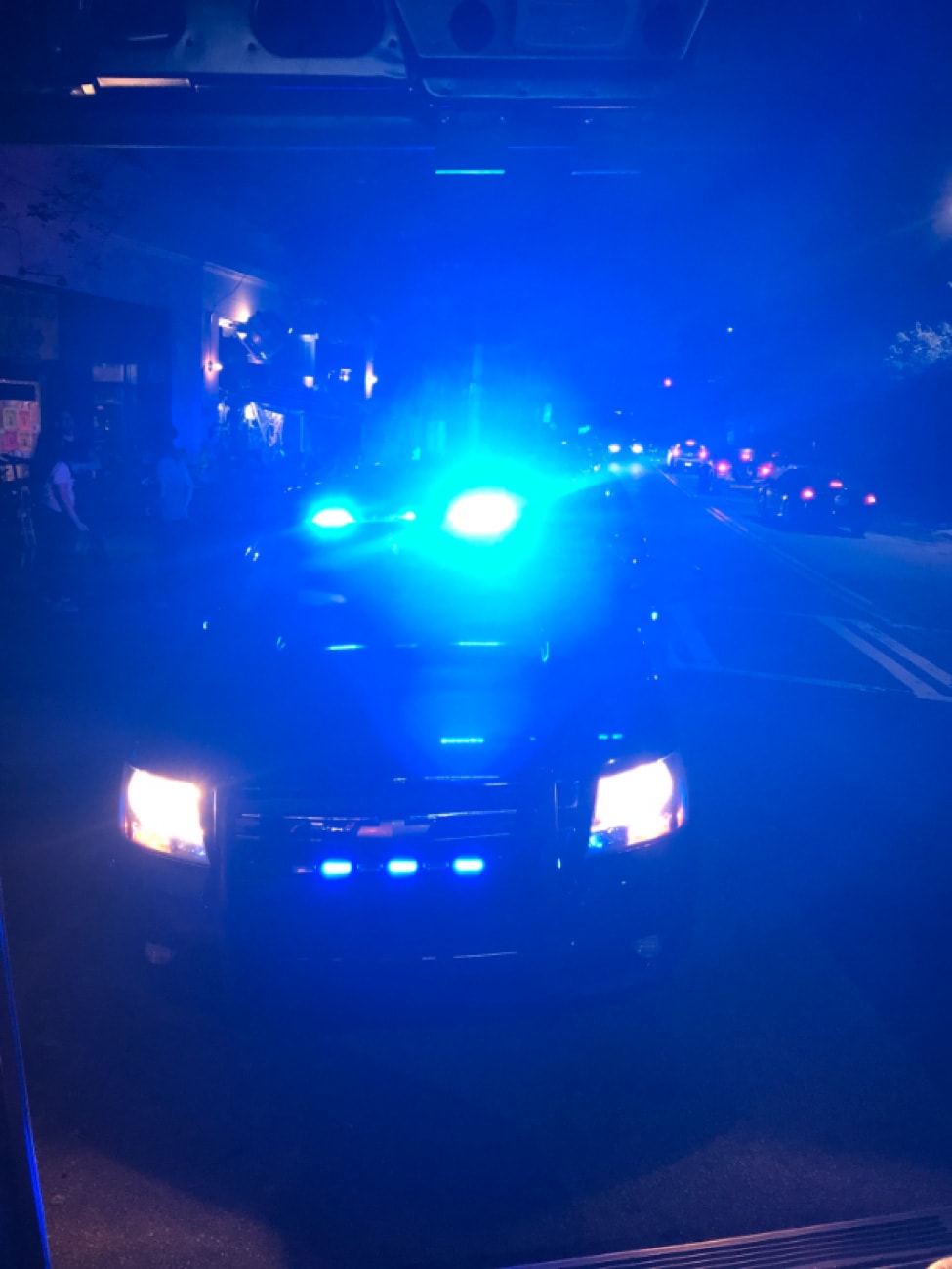 With high fives and hugs, we packed the War Rig with sleepy eyes, and forward thoughts of our last stop on this wonderful Chromoly thrill ride:

Home to the venerable Grand Ole Opry, the always good time- Cooter’s Place, and Halcyon Bike Shop, Nashville sports over 50 miles of paved greenway throughout the city in and along the Cumberland River. Run by co-owners and brother-sister duo, Andrew and Stephanie Parker, the team at Halcyon planned the route through town, out past the Shelby Bottoms which is where this bike packing stop on the Loaded Touring tour would take make home for the night.

Halcyon is in the bustling Hillsboro/12 South neighborhood of Nashville. Amid vintage guitar shops, and designer boutiques, this shop nods to a hip-commuter focused appeal. Halcyon stocks a good amount of Surly Pavement bikes, as well as a decent array of our Dirt Touring bikes and gear. The Loaded Touring event planned for this stop just-so-happened to fall right smack dab on the owner, Andrew Parkers’ name day. (Which, I think is totally rad that he was willing to spend riding bikes with us. Thanks Andrew!) 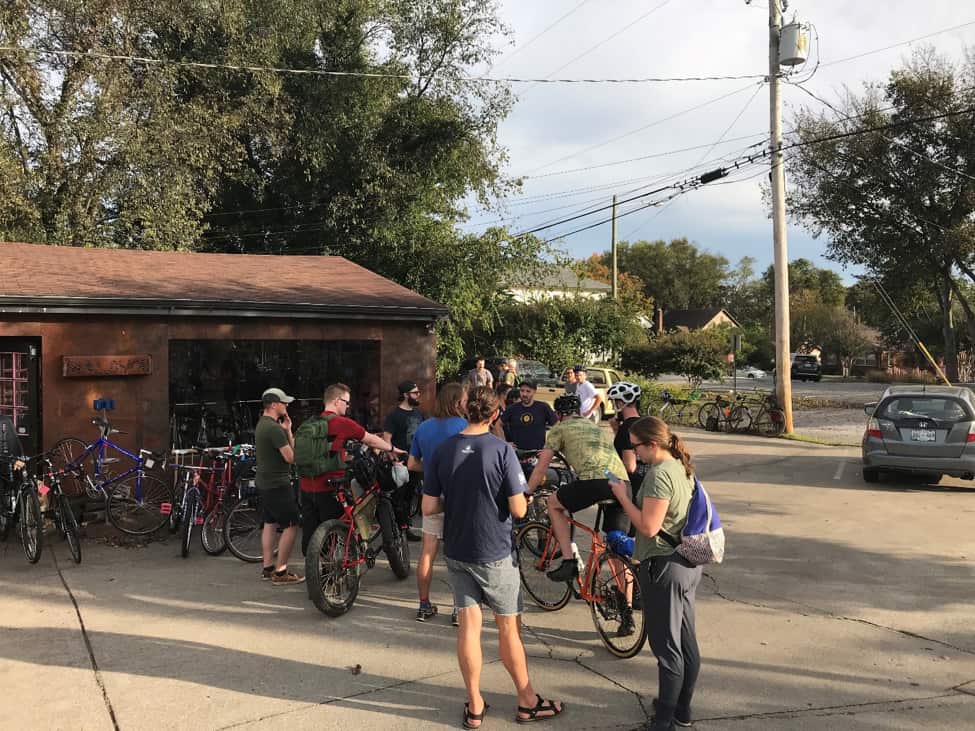 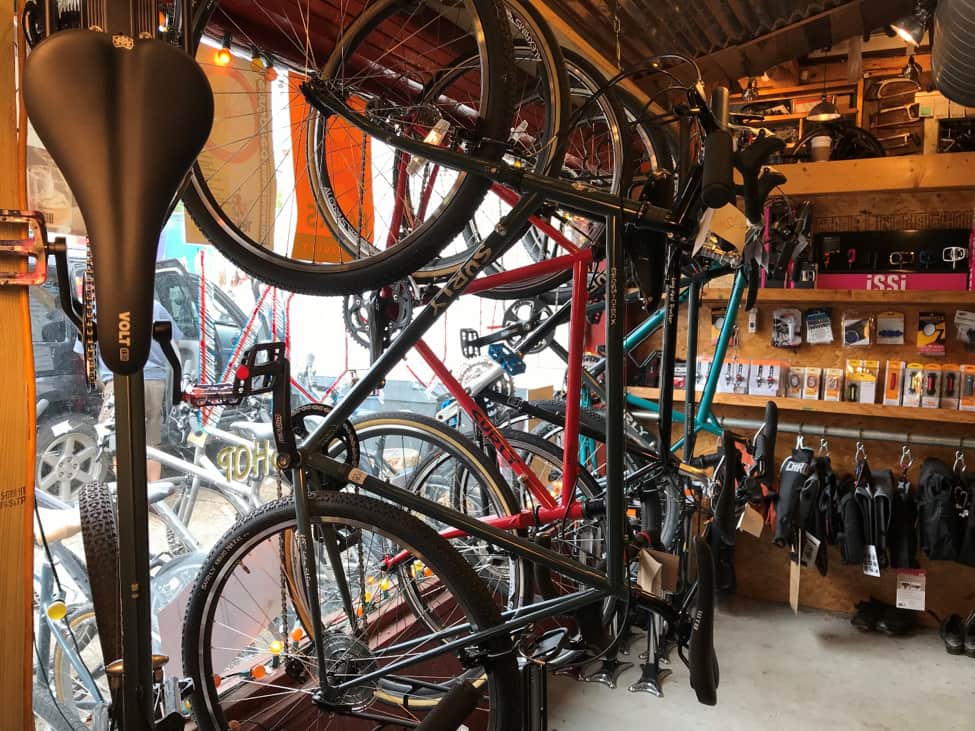 The plan was easy peasy: Get on bikes with friends. Ride bikes out of the city. Make a campfire. Camp. Return to city with a renewed sense of purpose. I wanted to keep this stop as simple as possible since it was Andrew’s Birthday, and wanted to spend the time singing him Happy Birthday until he pushes me into oncoming traffic. 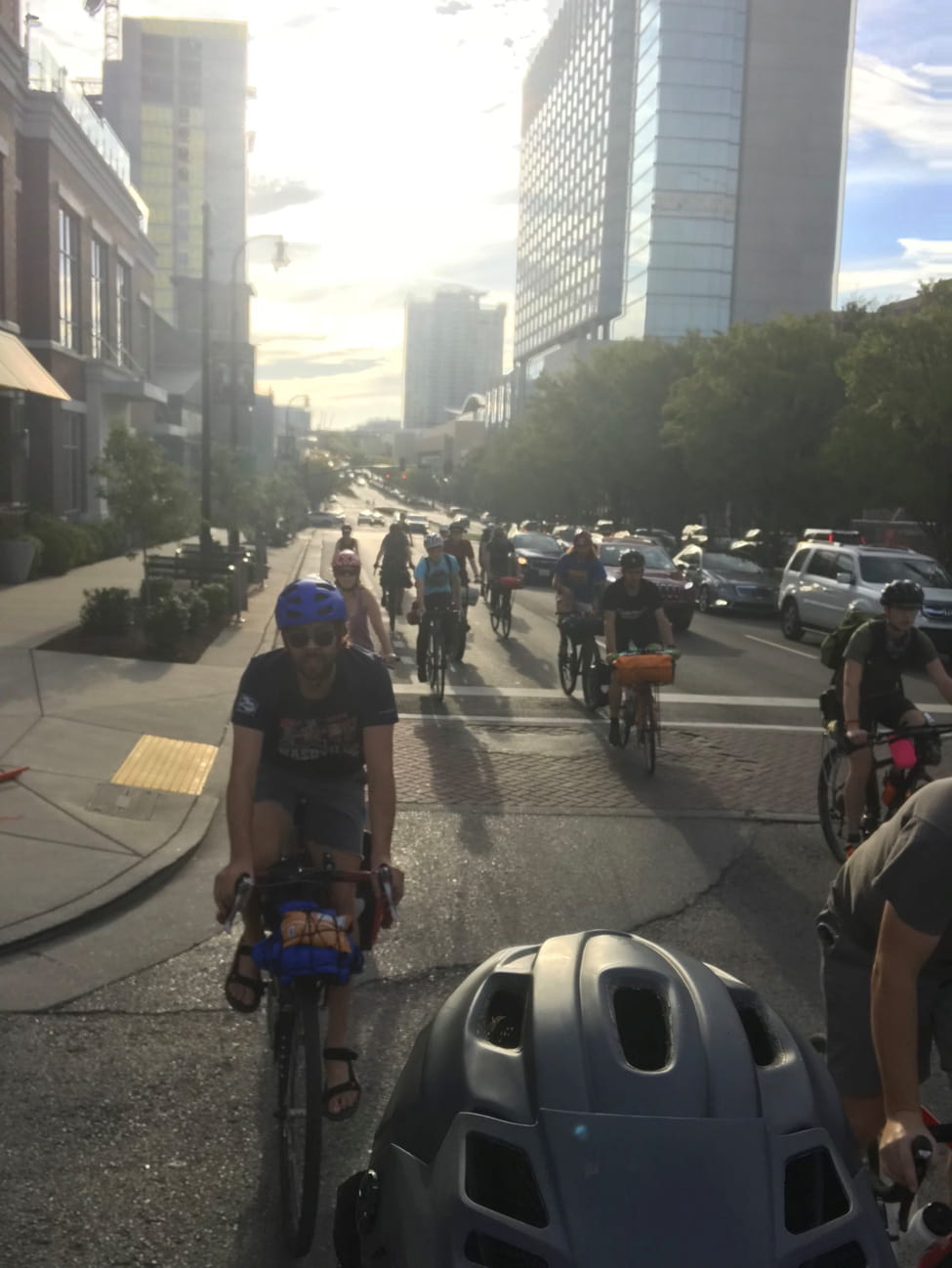 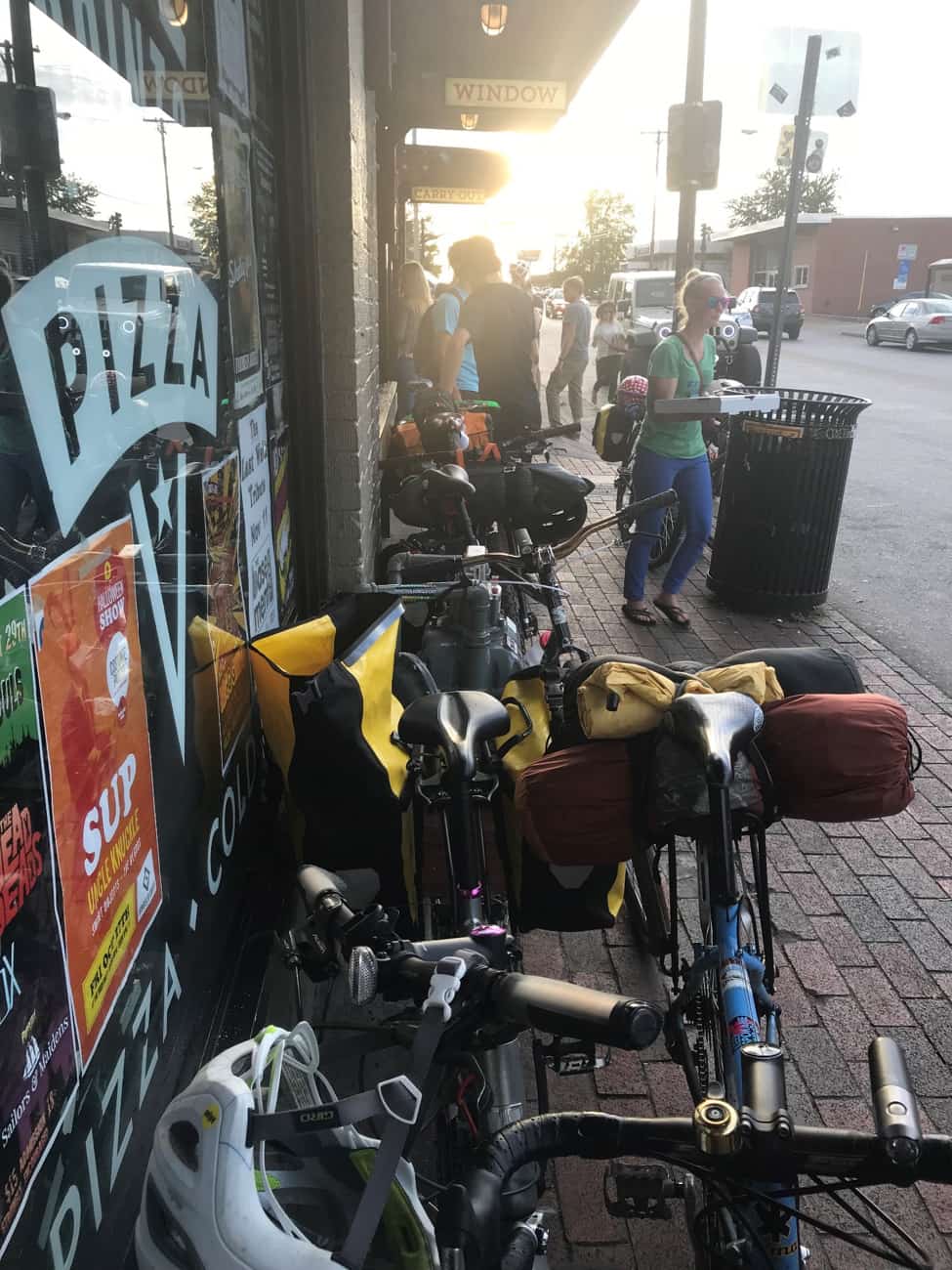 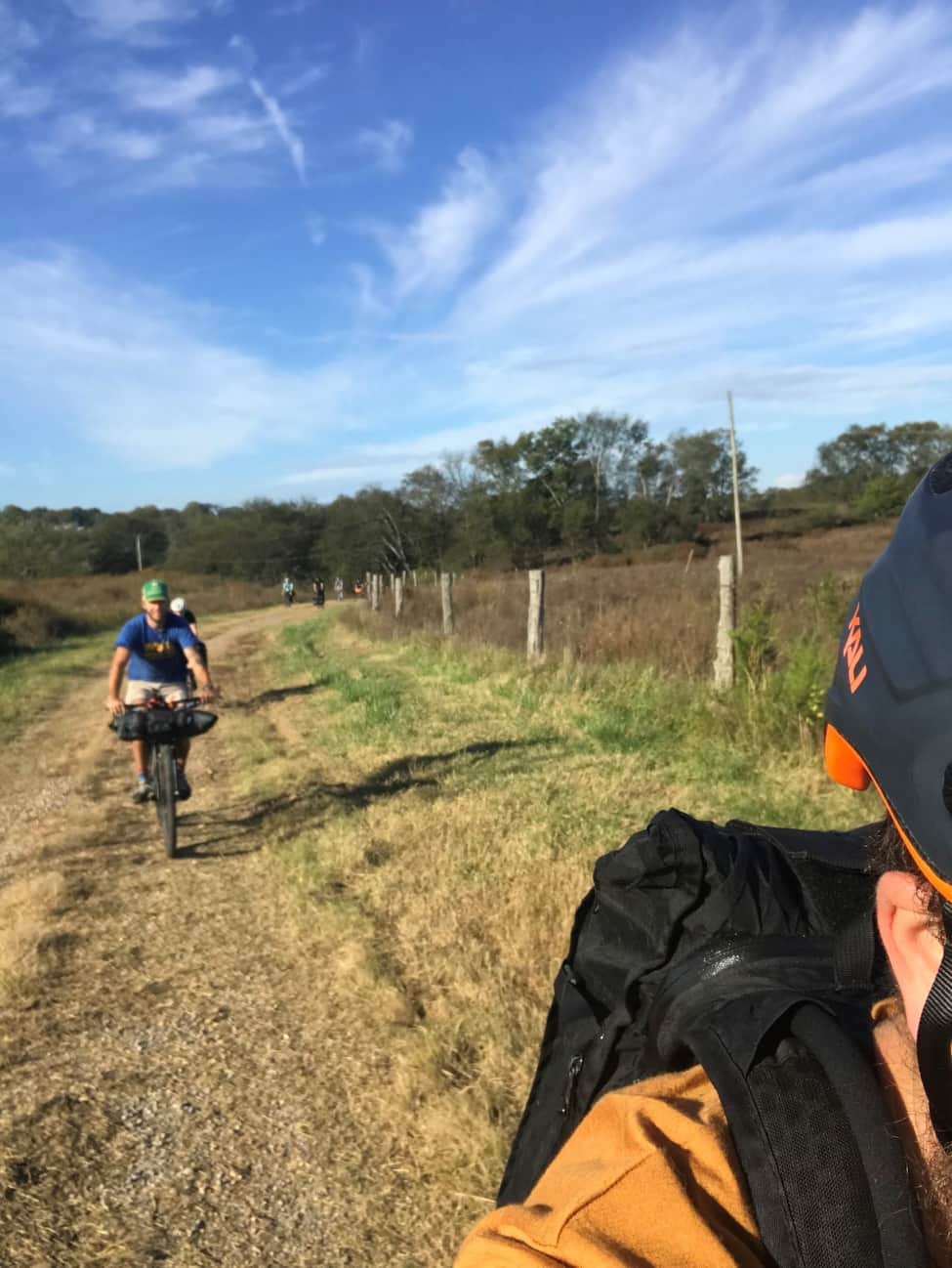 We may or may not have broken into an abandoned golf course. 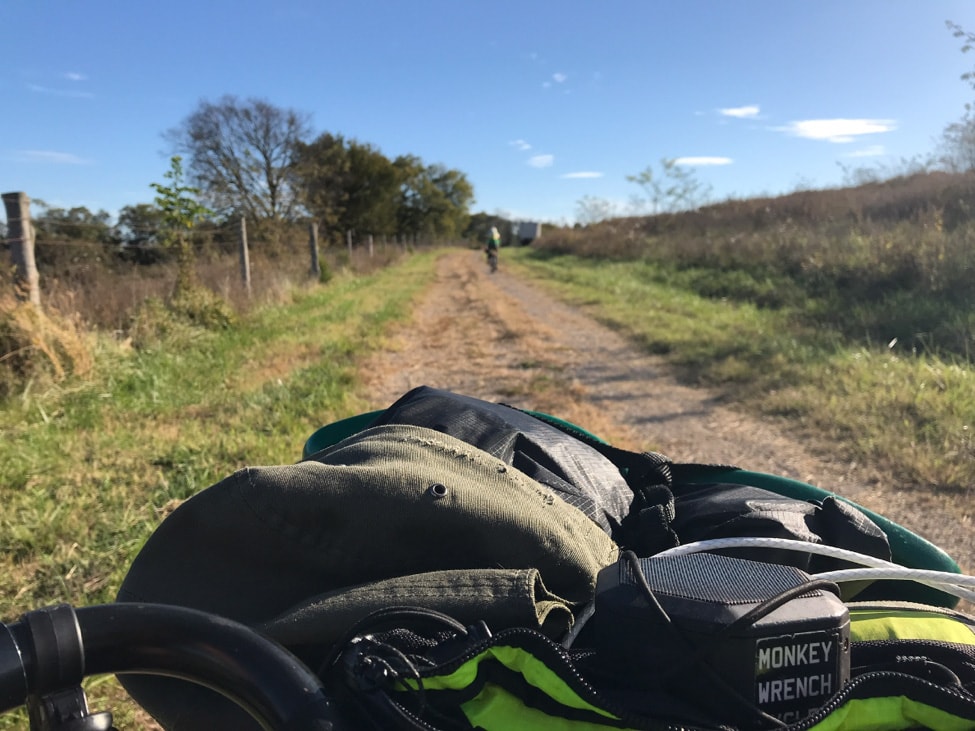 Every demo driver should take in some sights from time to time. It helps break up the monotony of Interstate travel and the smell of disinfected hotel rooms. I love to find cool places to stretch the legs. Bike related or not, it’s nice to unwind from the stress of traffic from time to time. My good friend, East Side Jake would put it, “Let’s try a little local flavor”. On this trip, my taste of local flavor happened to be in Louisville for a quick rip at the Mega Cavern. I’ve always wanted to check this place out since first hearing of it. As a born and raised Minnesotan through and through, I marvel at the idea of mountain biking in the winter. Back home we call it ‘surviving. I won’t dwell on it too much, but this stop was well worth it. I got to burn off some pent-up energy, and I had the whole place to myself, practically. 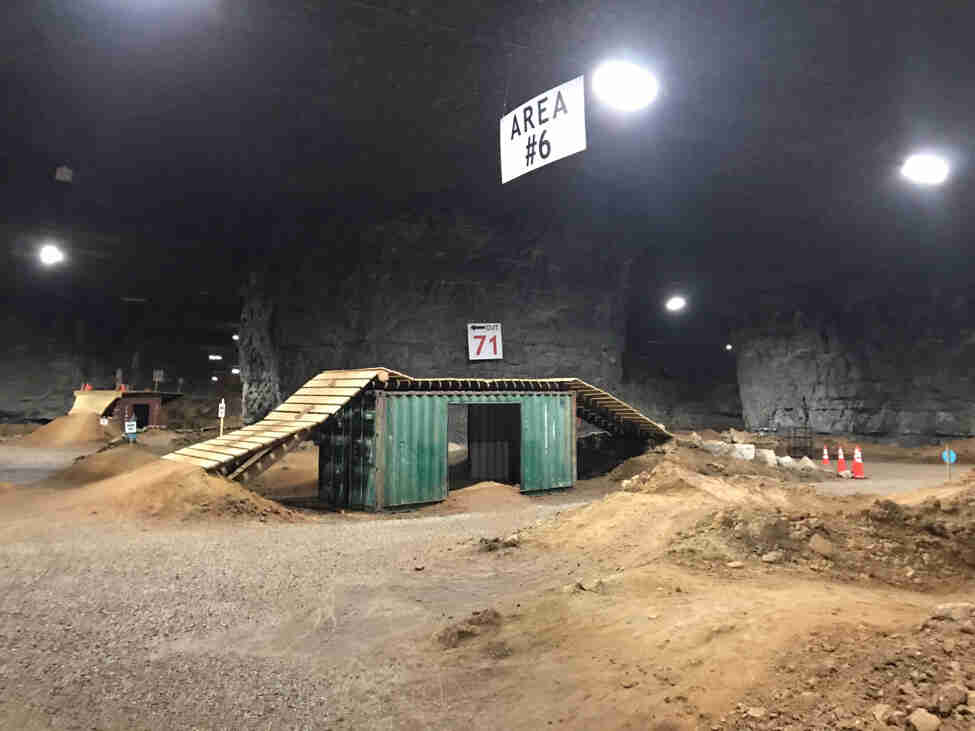 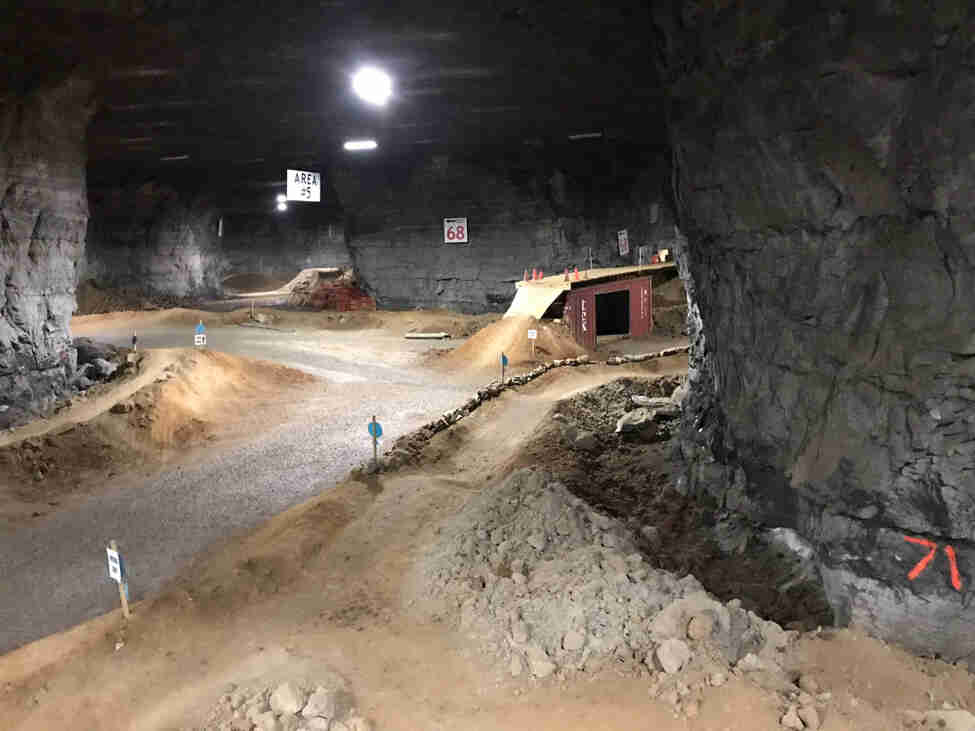 I’m never officially home until I check off any number of things on my list of “Minneapolis Ass Things to do when I get home”. That list of things includes things like kiss my lady. (First and foremost!)  Rub my cat on the nose. (He loves that shit), order Pizza Luce in my underwear.

Shortly after returning to the 612, I got a text from an old friend who was in town doing sound for some touring metal bands. His text said I better get down to The Cabooze because I was on the list for Full of Hell/Revocation/Cattle Decapitation show that night. Having your brain sonically eviscerated out of your head is a hell of a way to remind yourself you are home. My bang over from this one lasted about a week. 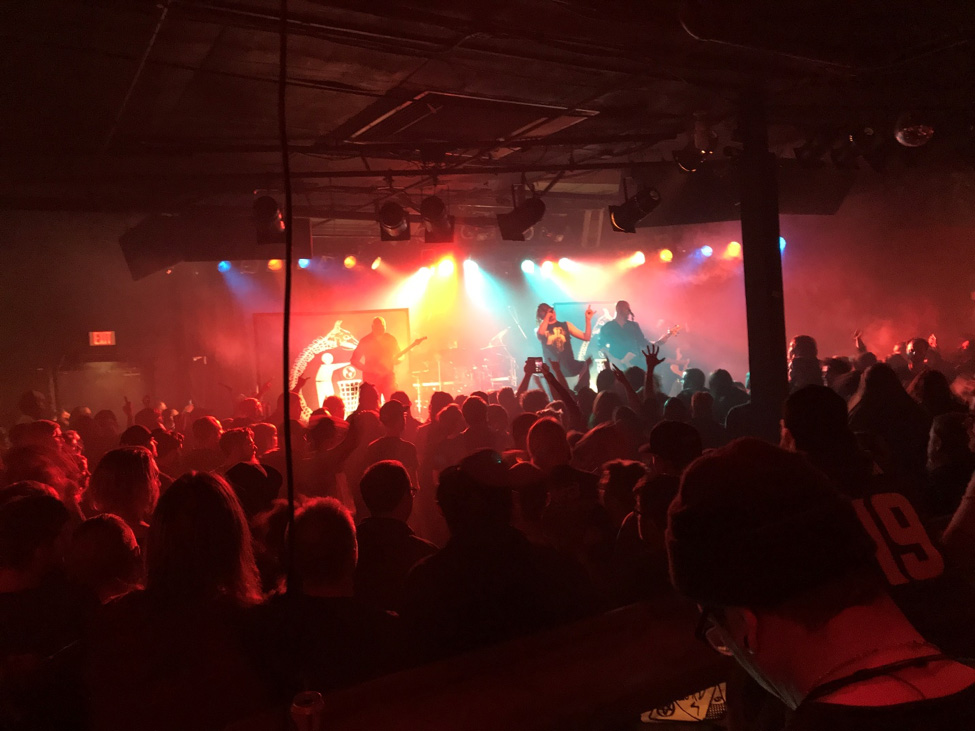 Cattle Decapitation was phenomenal. Thanks, Loopy.

I love what I do. I love meeting people who have a passion for what they do. You can spot them a mile away. They are the ones who remember to put you on the guest list. The shops that do well with Surly always have at least one of these people in their midst, passionate people, that is.  They are the people always riding a bike that is well put together. Or at least riding well, on a bike that isn’t put together all that well. They participate in life on a different level than many. They positively influence the people around them. These people carry themselves with an everyday purpose in life that many never experience. You don’t have to change the world in a day, hell you don’t have to change the world at all. All you need to do is be a good person to the human standing next to you. And who knows, maybe they’ll change the world for the better because of that interaction. Who knows?  (Insert cheesy fade out)

Well, partner, this ends The Whole Kielbasa/Loaded Touring portion of Tales from the Road. It’s been a pleasure sharing a snippet of the chaos that is Surly Intergalactic with you.

Until next time, keep it frosty.