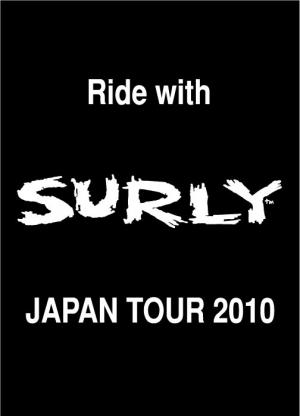 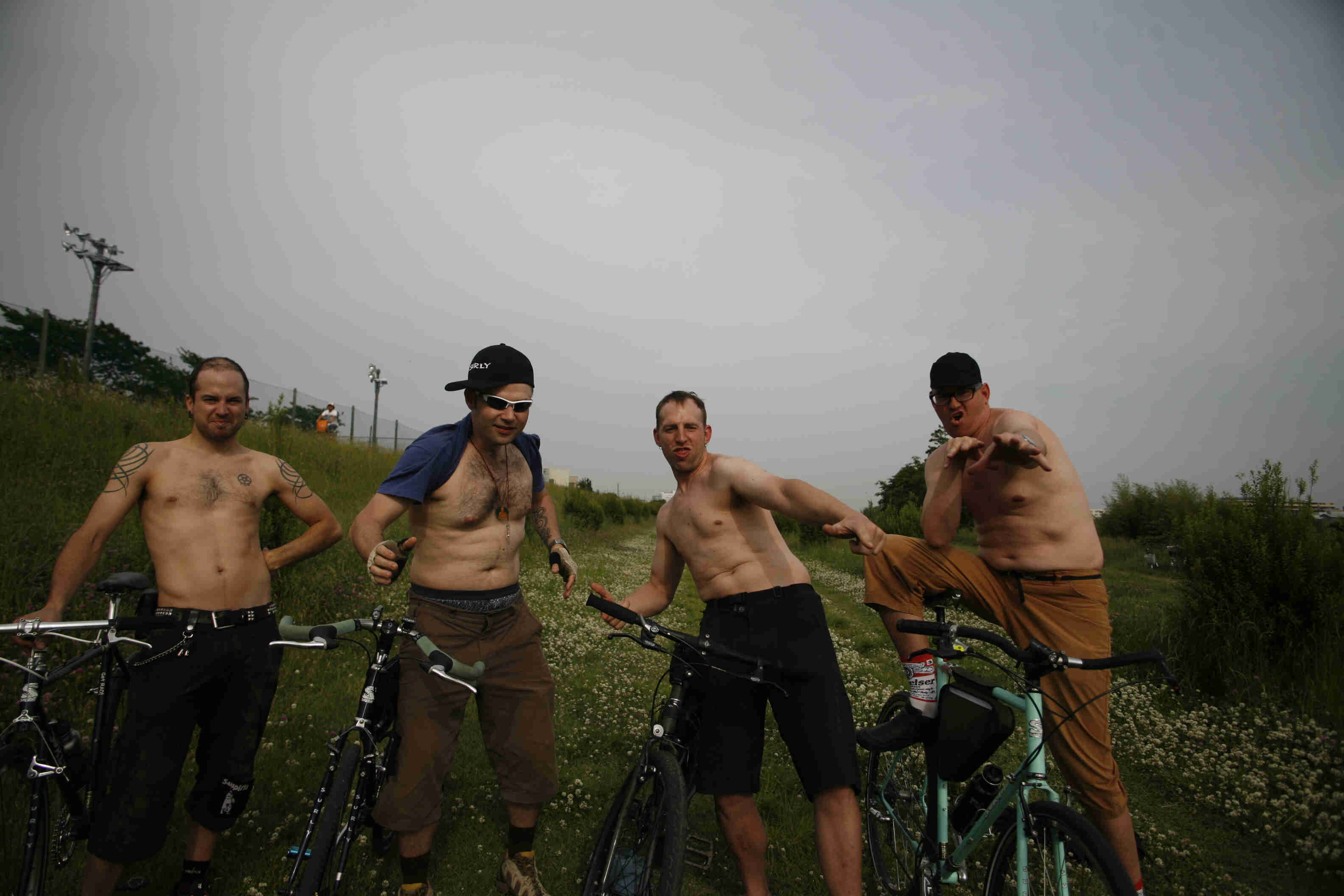 On May 20th Trevor, Fleck, Grayboy and I did a 10-day, four city tour of Japan.  The theme of the trip was “Ride With Surly,” which was aimed at getting people together to ride their bikes (Surly or not) and have fun.  No sales pitches, no hassles, just good clean fun.

This is the first of four blog posts documenting our travels, and since I am writing the first one I thought it would be a good opportunity to explain what the Surly-Japan connection is all about.  When I was fresh out of college I went to on a whim to teach English, and ended up staying there for nine years, learning the language, running a business, and marrying a Japanese woman.  Japan became my home away from home, so when I returned to the States and got a job at QBP I had an in on developing connections between the QBP owned brands and the Japanese market.  In 2004 I succeeded at convincing Motocross International to pick up the Surly brand for distribution.  At that time steel bikes were very much out of fashion in Japan, so I set my expectations low and hoped for the best.  Little by little we were able to build a strong reputation in and are now not quite a household name, but well known and respected.

The Japanese market is a fickle one, where consumers tend to follow the latest fashion trends, which has lead to boom-to-bust scenarios for countless companies who failed to understand that aspect of the market.  Having lived there I have been very keen on staying on top of the Japanese market, and to do this I’ve facilitated several trips there over the past several years.  has become something more than just another market for Surly, it’s a bit of an inviting second home for the brand, and each time I visit I notice change.  Our trip this time was no exception.

May 21 – We landed at Narita airport near Tokyo, gathered our luggage, exchanged money and boarded an express train for Shinjuku.  All of us brought Travelers Checks to ride, which we hauled with us on trains, planes and automobiles, not the easiest task considering how congested Japanese cities are. 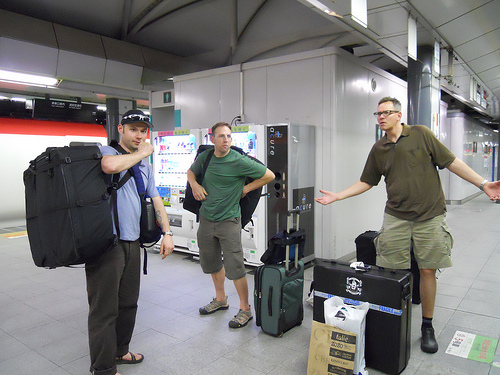 After getting checked into our hotel in Shibuya we headed out for dinner with Rie Okamoto and Shuji Yamamoto.  Rie owns Motocross International and Shuji is a freelance writer.  They are two of the hardest working people I know and deserve much of the credit for Surly’s success in .  We ate and drank at an izakaya in Shibuya.  Japan is very much a food culture and most restaurants take great pride in serving very fresh, high quality foods.  The place we went that night was just what the doctor ordered.  Everything we ate was fantastic, but the real reason I was there was the shochu. 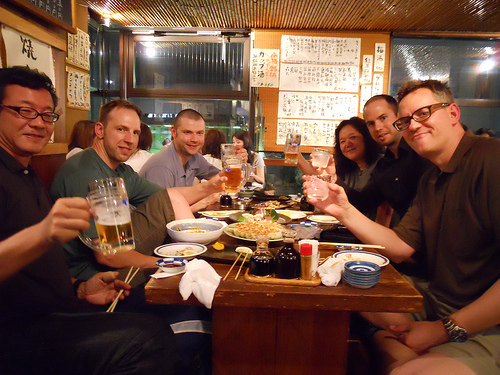 We ate and drank our fill and then walked back to the hotel to build our bikes.  By the time I got mine built is was 1:30 a.m. and I had officially gone 22 hours without sleep.  I fell asleep before I even hit the pillow.

May 22 – We ate breakfast at the hotel and met outside with our bikes at 9:30.  Today we would be touring Tokyo with Shuji as our guide.  Our first stop was FIG Bike Shop in Daikanyama, which was a 15 minute ride from the hotel.  There, we met up with around 30 folks for the day’s ride.  At 10:30 we rolled out, following Shuji through a myriad of back streets, alleys and bike paths where we stopped to see temples, historical landmarks and shrines. 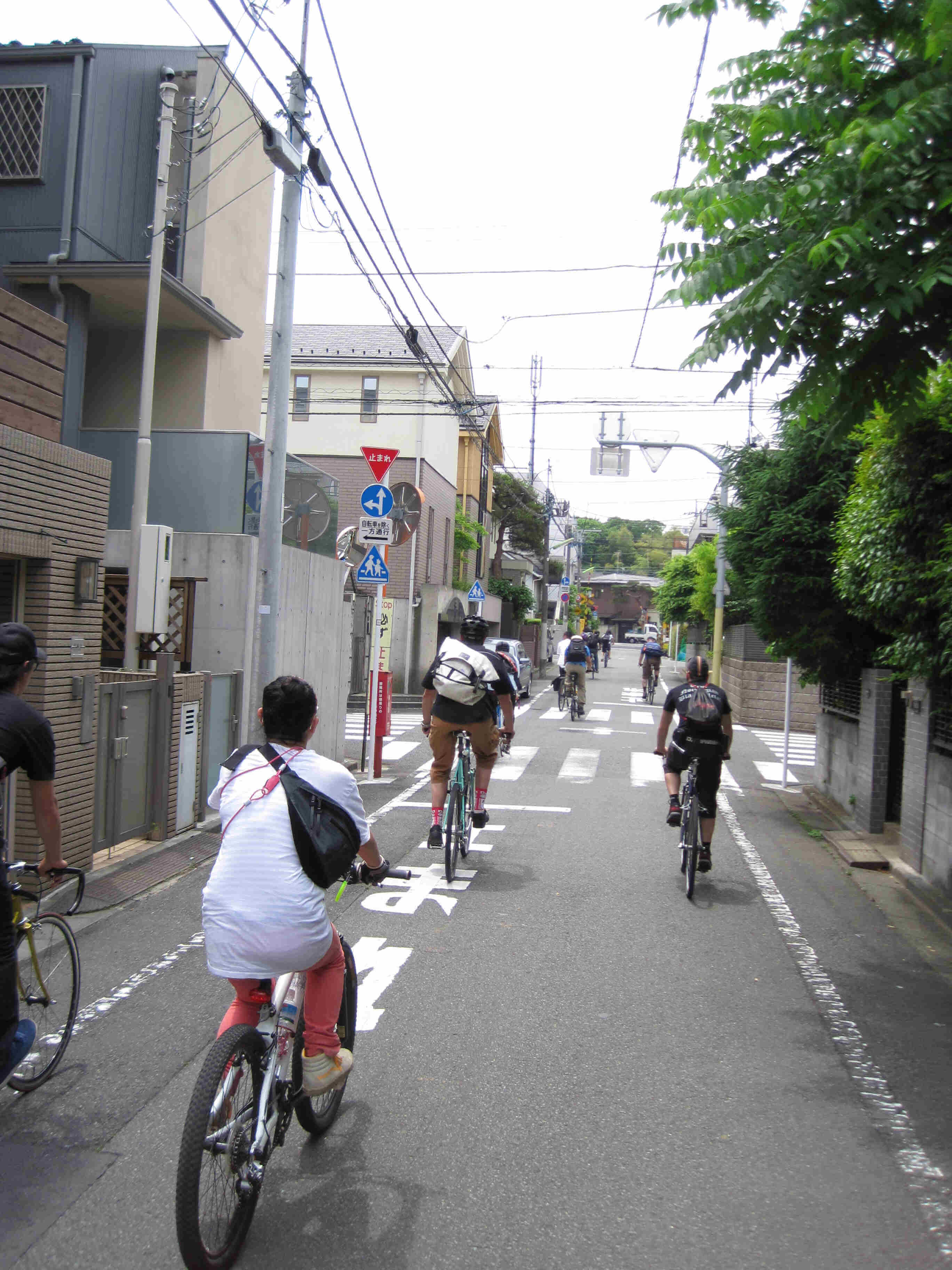 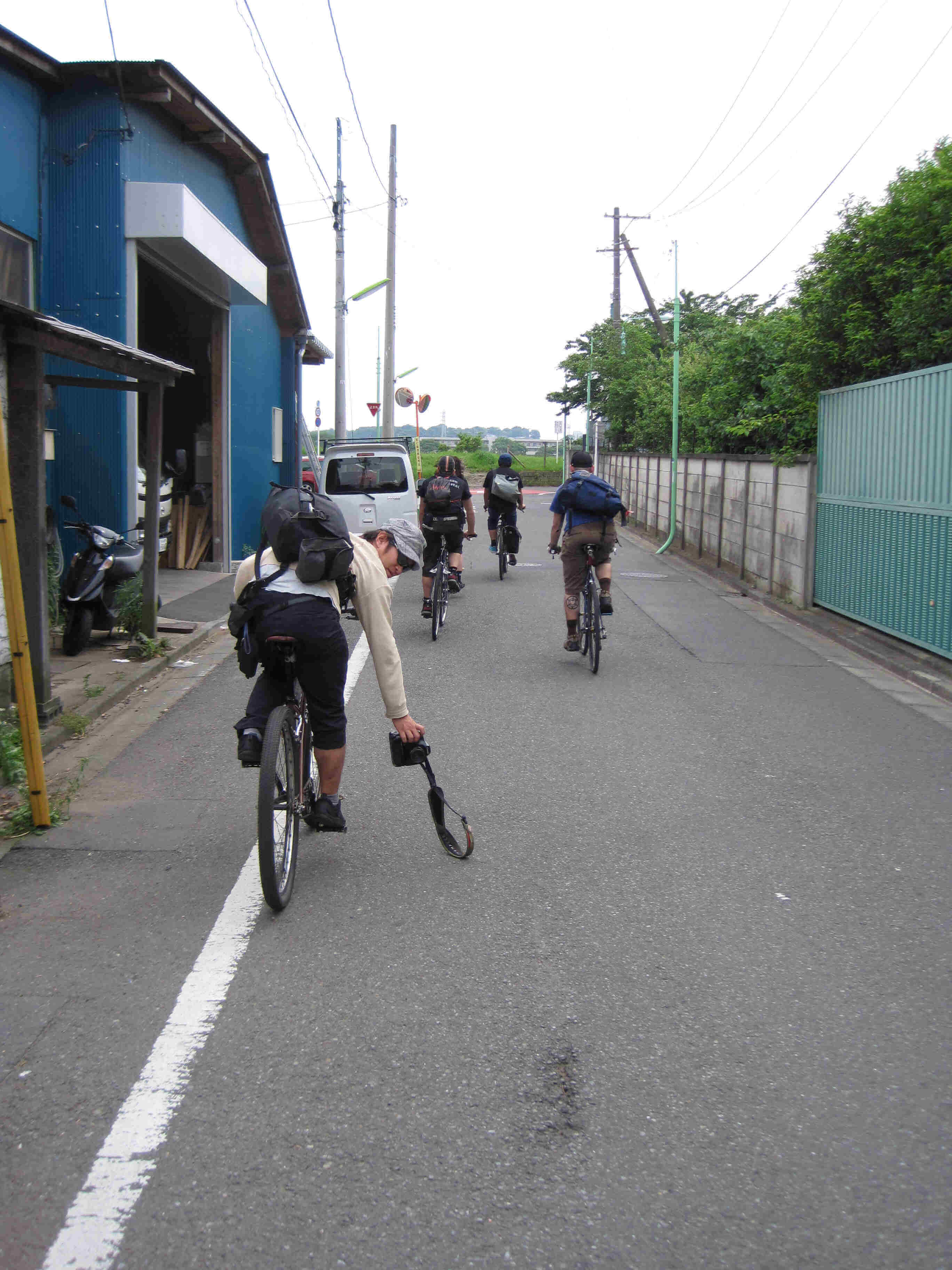 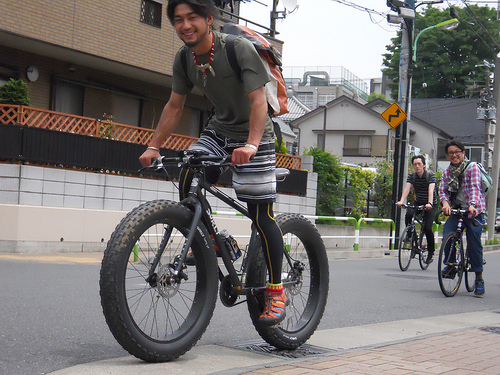 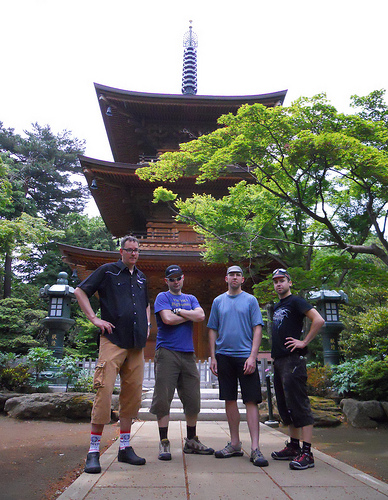 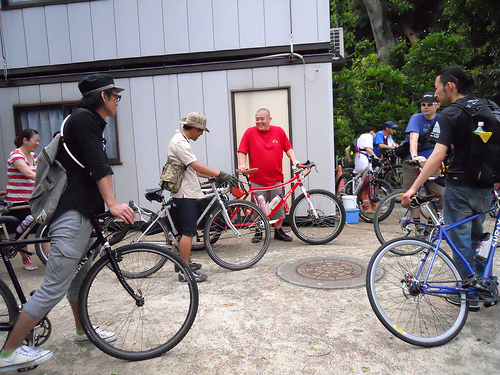 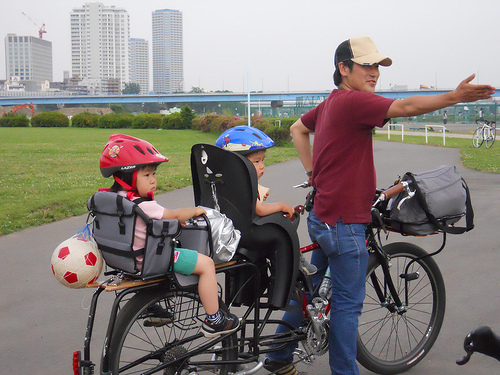 After around 3.5 hours of riding we stopped to buy lunch and then headed to the Tamagawa riverside to relax and hang out. 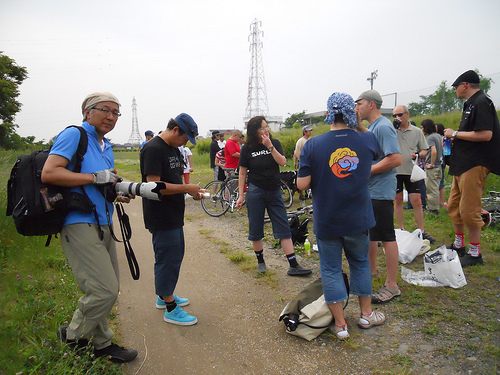 After lunch a topless derby ensued and the winners were the ladies. 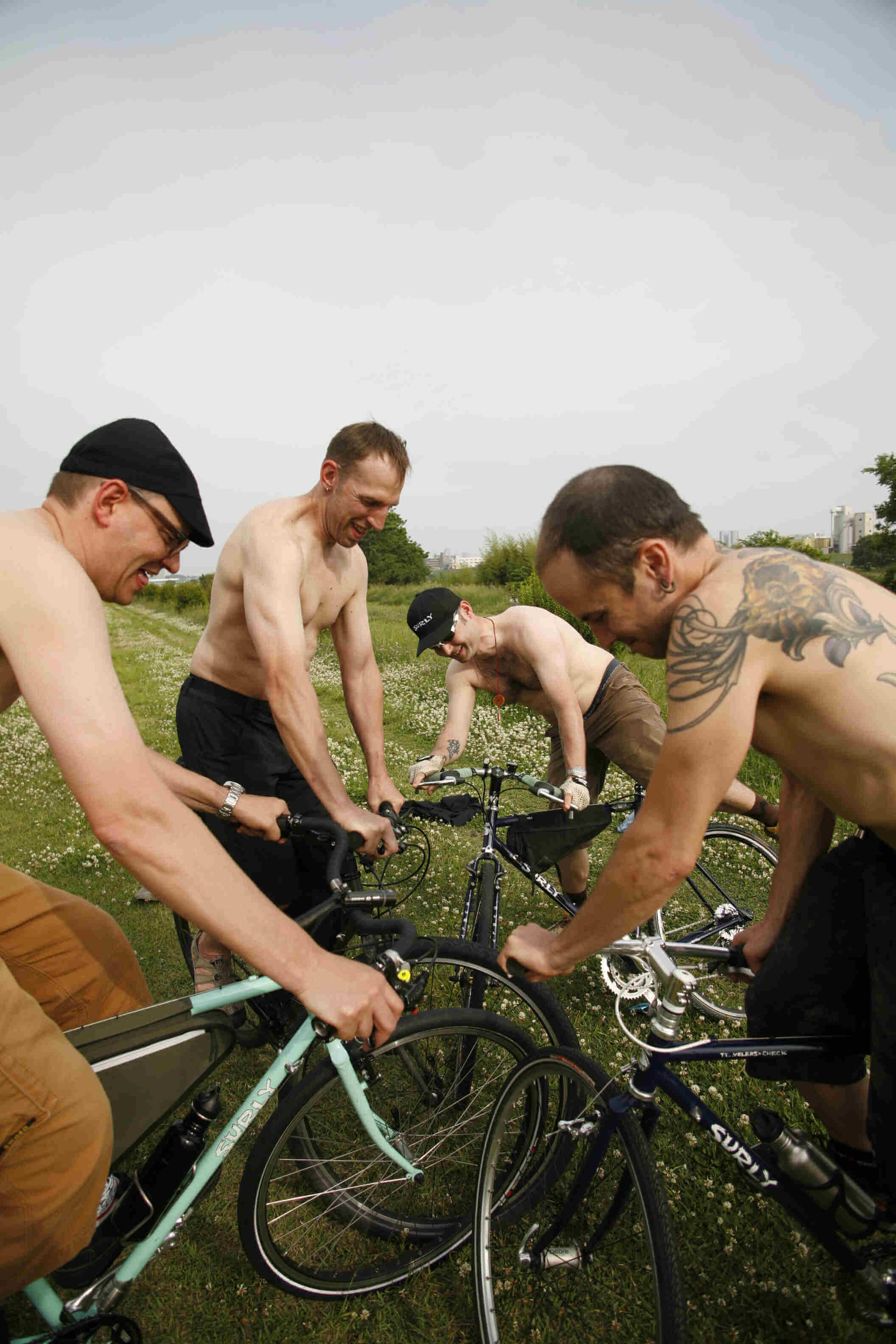 Thanks to Nozomu of Bicycle Magazine Japan for the images.

You might remember Hanzi san from a recent blog entry of mine.  He was there on his pimped out Big Dummy along with his lovely wife who rode a Long Haul Trucker.  Not only did Hanzi san join our topless derby but he also busted out his guitar and played some songs for us.  Hanzi has got some PIPES on him, and reminds me of d. boon both in sound and stature.  Others said they thought he sounded like Frank Black. 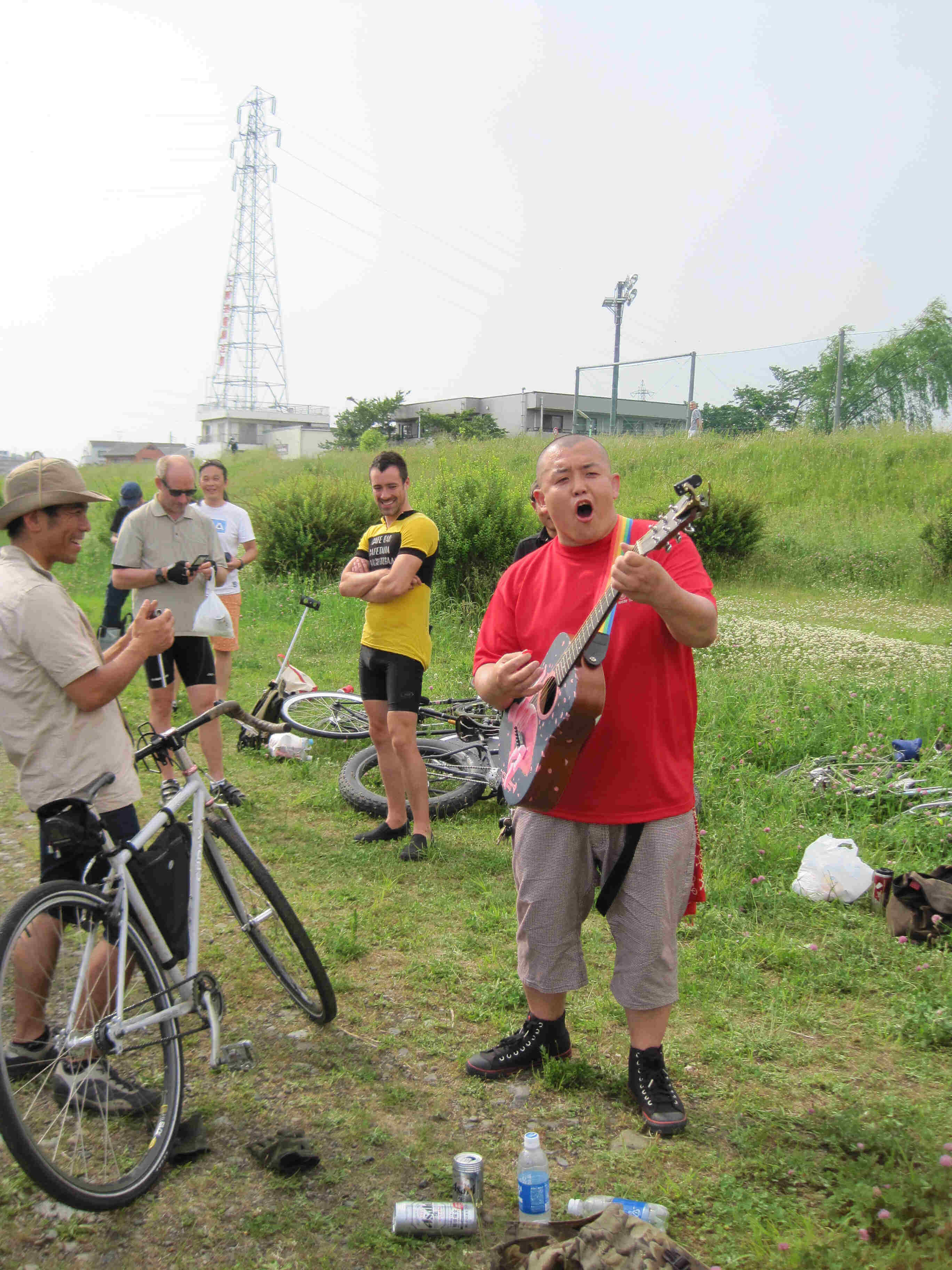 When the party started to wind down we got back on our bikes and headed back toward base camp, stopping at BMX RIO bike shop on the way.  This shop is where I had my first meeting with Rie seven years earlier, to convince her to pick up the brand.  I still remember that day very clearly.  I sat talking with her and Makita san, the shops owner, for about three hours while it poured rain outside before she finally said she would do it. 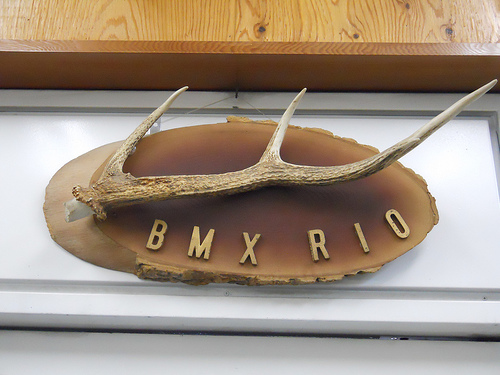 We rode back to the hotel, showered up, and headed to Shinjuku to eat sushi, drink sake and wind down from the long day.  While Rie and I played pachinko after dinner, Dave, Trevor, John and Shuji went shopping in Shibuya. 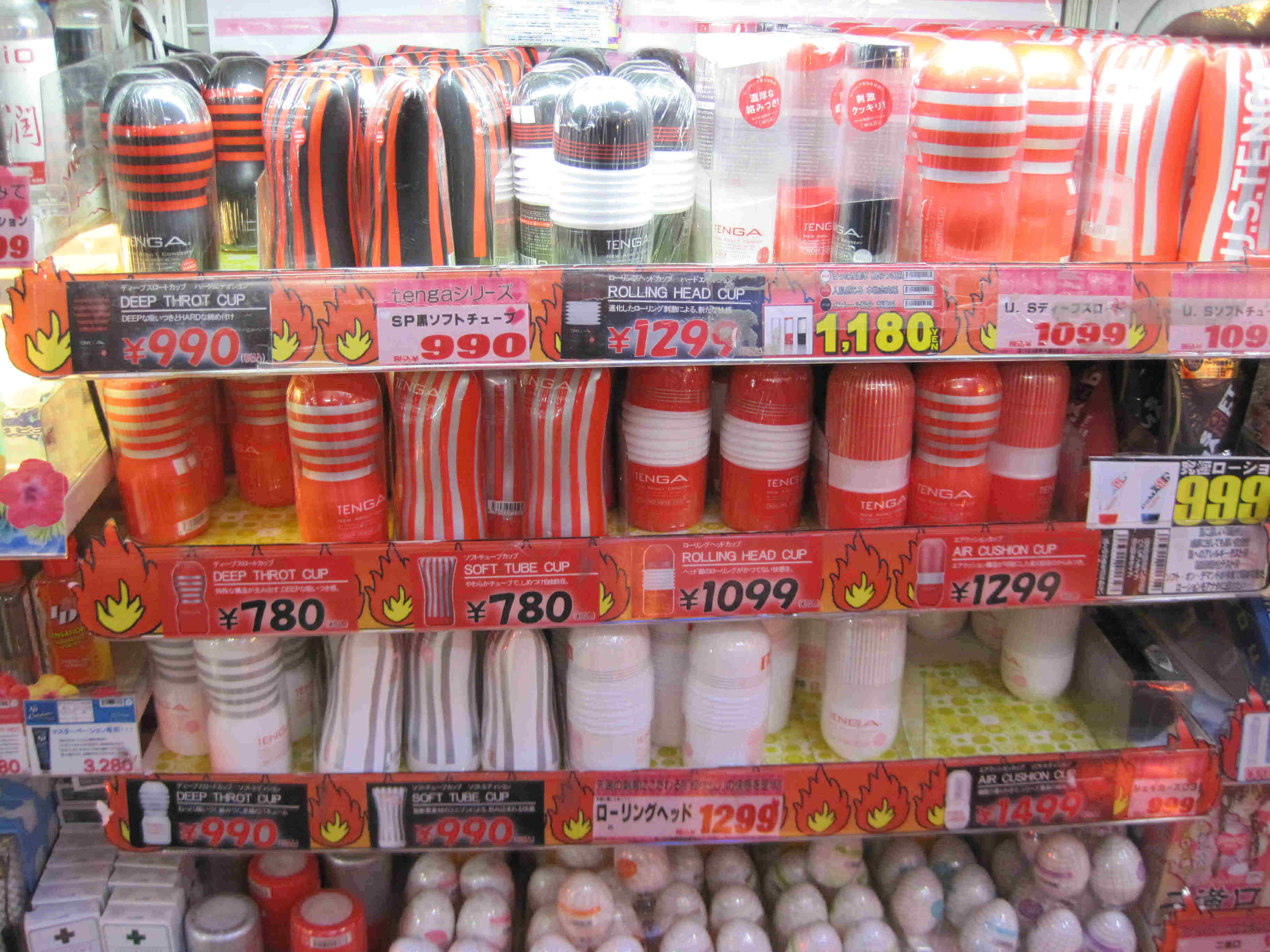 I always miss the weird stuff.

May 22 – We woke up to a dreary rainy day like the ones I have seen so many times during the rainy season.  Today we were scheduled to ride again, but this time we would meet up at Baren Bike Shop in Asakusa.  Rie offered to cancel the ride due to weather but we insisted on riding, which at first seemed like a great idea.

We left the hotel at around 9:30 and rode about one hour to the shop.  The rain was not falling hard and traffic was light, it being a Sunday, so we enjoyed the ride and did not get too wet. 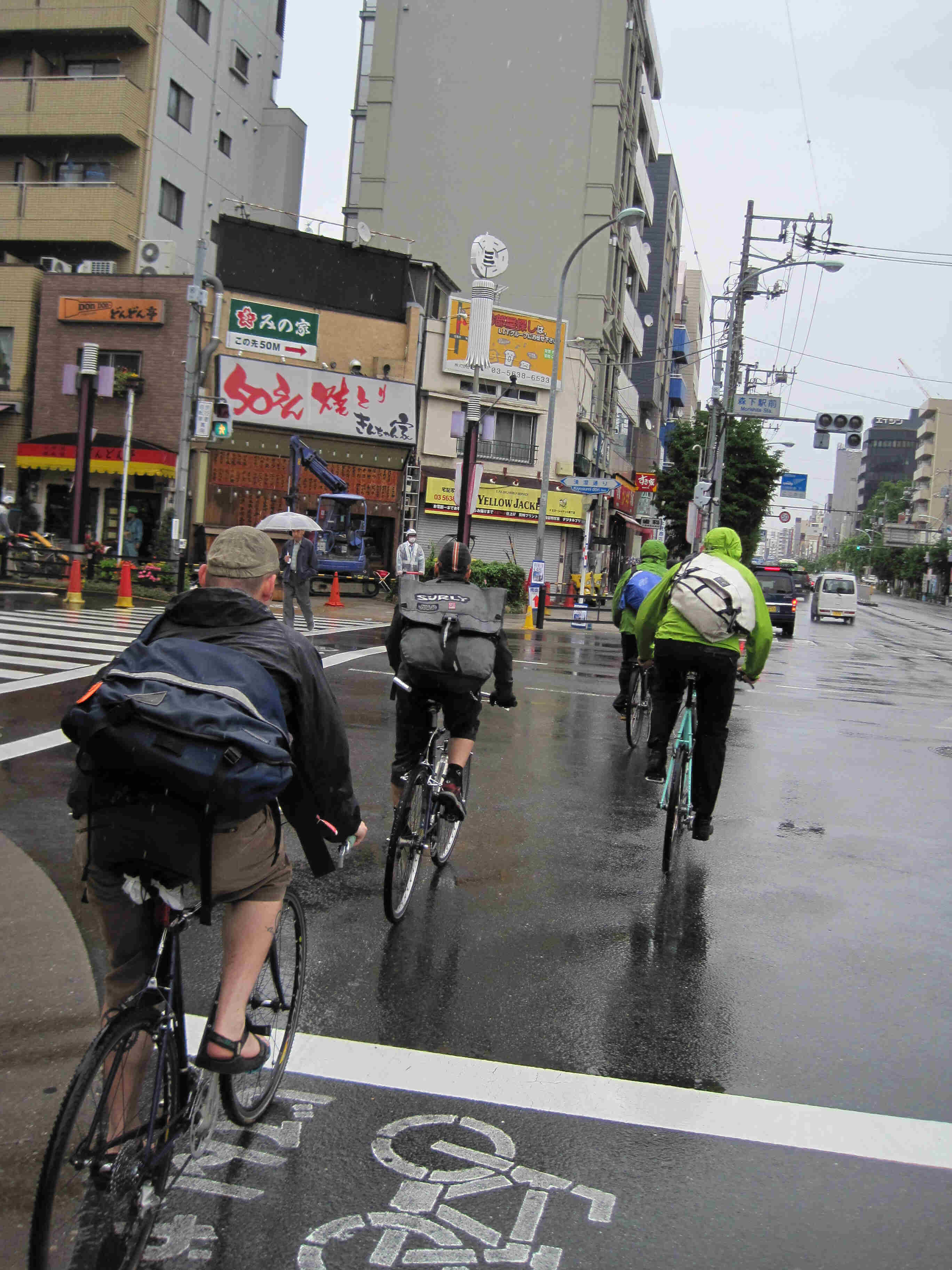 Baren (meaning bear in German) is one of the first shops in to commit to carrying Surly, and has been passionate about it from day one.  Kumazawa san is a truly surly guy, never settling for the status quo in what he does.  He is a perfect fit for our brand.  After drinking coffee in the shop while waiting for folks to roll in, we finally departed on a short ride around the Asakusa area with a group of around 10 riders. 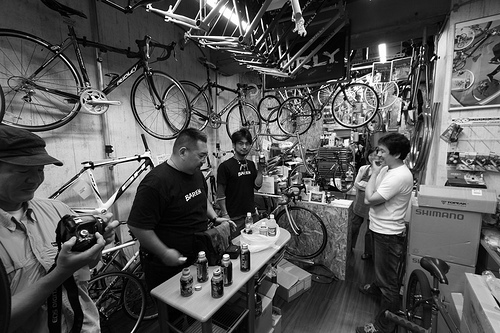 We witnessed the construction of the Tokyo Sky Tree, visited Asakusa Shrine (this place really sucks on rainy days with everyone wielding umbrellas, attempting to cut the jugulars of tall people), The Sumida Riverside, and the Asahi Brewing Company’s brew pub.  After a couple hours of sampling the craft beers and whiskies we realized that the fun had to end and it was time to ride back to Shibuya in the now soaking rain.

The ride back was much wetter as we were riding into the wind and the rain was falling much harder than in the morning.  But, since it was still early enough Rie took us to visit two bike shops on the way back to give us a break from the misery.

The first shop was Slow   This shop is very small and very laid back, and Ueda san, the owner, has done very well selling Surly bikes to Shibuya locals.  There are two turntables behind their counter on which they continuously spin soul records to create a very cool vibe and send the message that this shop very much marches to the beat of its own drum. 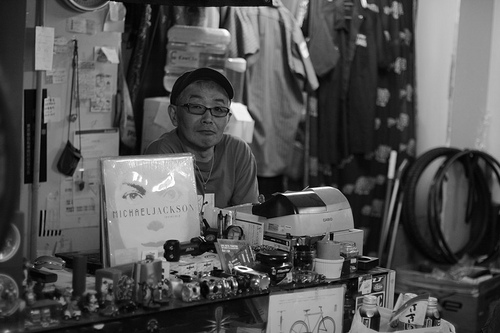 The second shop was Blue Lug, which is a very new shop specializing in urban fixie/commuter culture bikes and accessories.  This shop is very spacious and has a lot of inventory.  They do a lot of custom clothing and bags, and have a very original flavor that is refreshing.  The owner, Ashikaga san, is a hard working, ambitious businessman who clearly knows what he wants and is working very hard to accomplish it. 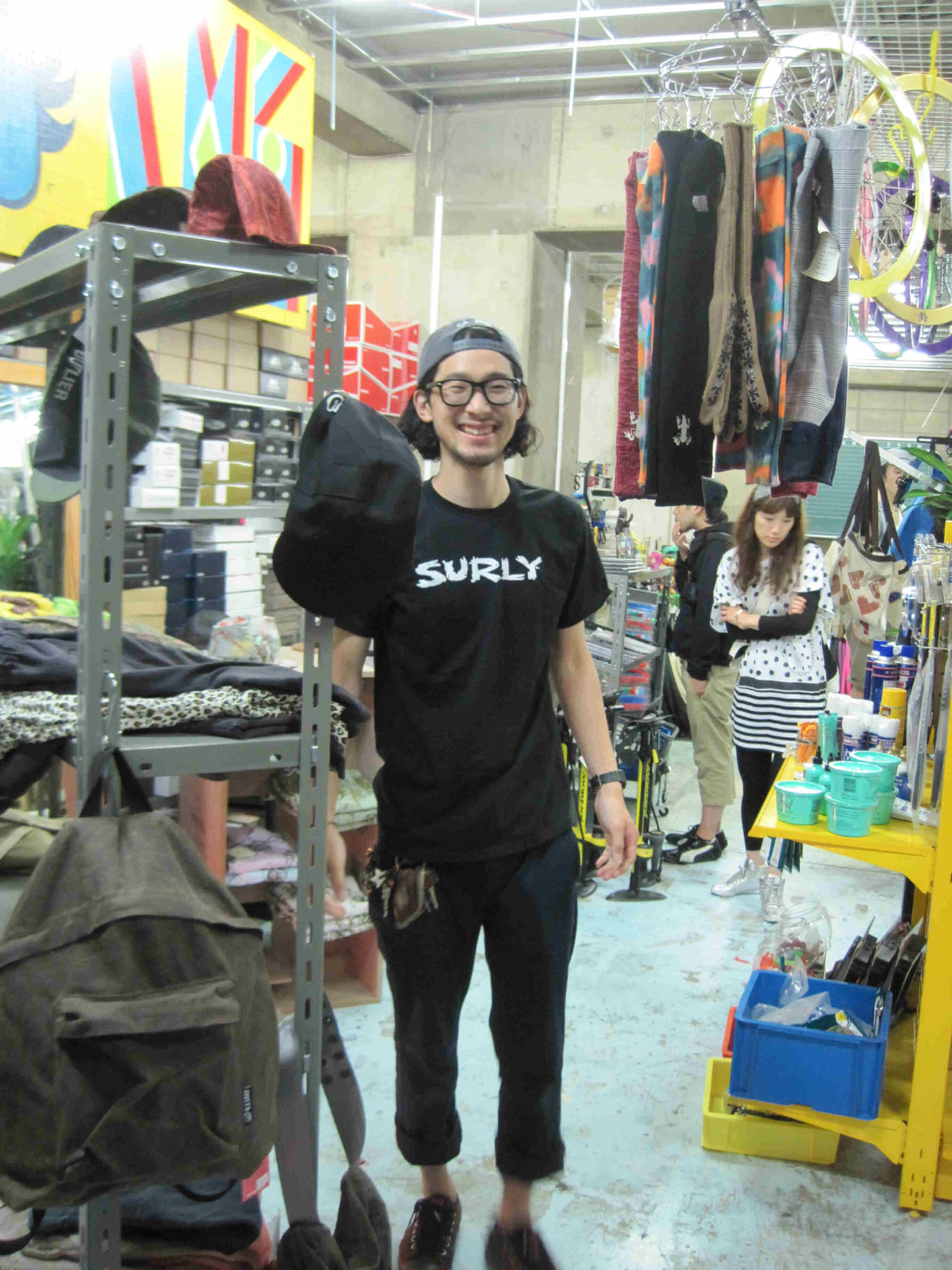 After the shop visits we headed back out into the rain for another 20 minutes until we arrived at the hotel, but that 20 minutes felt like hours as the rain seemed to come down harder and harder, and seemingly from every possible direction.  I couldn’t see much through my glasses and no amount of wiping them seemed to help, so I focused on Shuji’s blinky light and tried to keep it rubber side down. 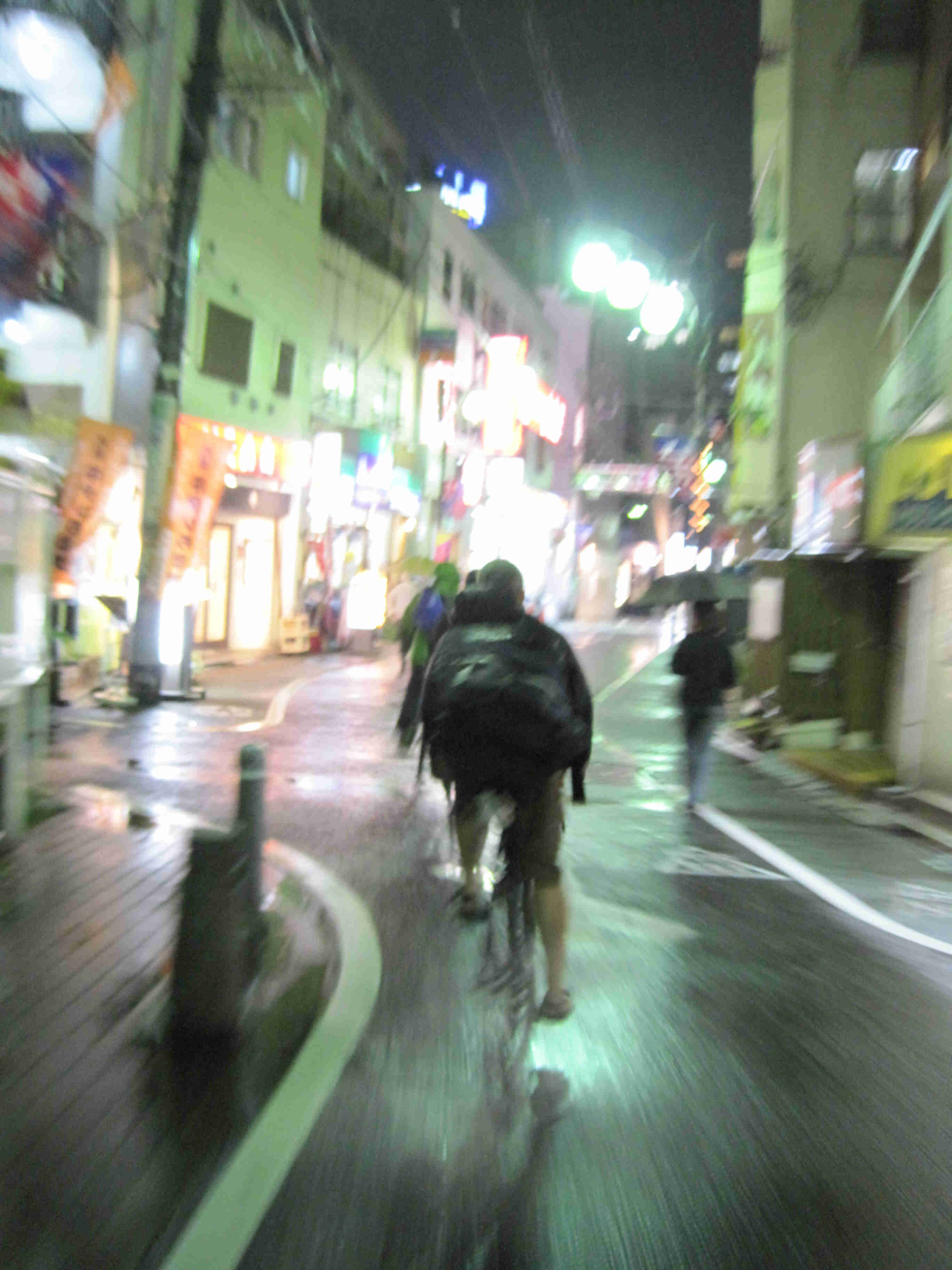 Safely back at the hotel we dumped the water out of our shoes, got cleaned up, and went out to eat at a ramen shop.  Hot noodles, cold beer and soggy dispositions rounded out two great days in .  The welcome we received from our dealers, customers and fans was truly amazing.

After packing our bikes up in our hotel rooms we hit the hay in preparation for the leg of the tour.  Only two days behind us and so much had happened already.  It was hard to imagine it getting much better.