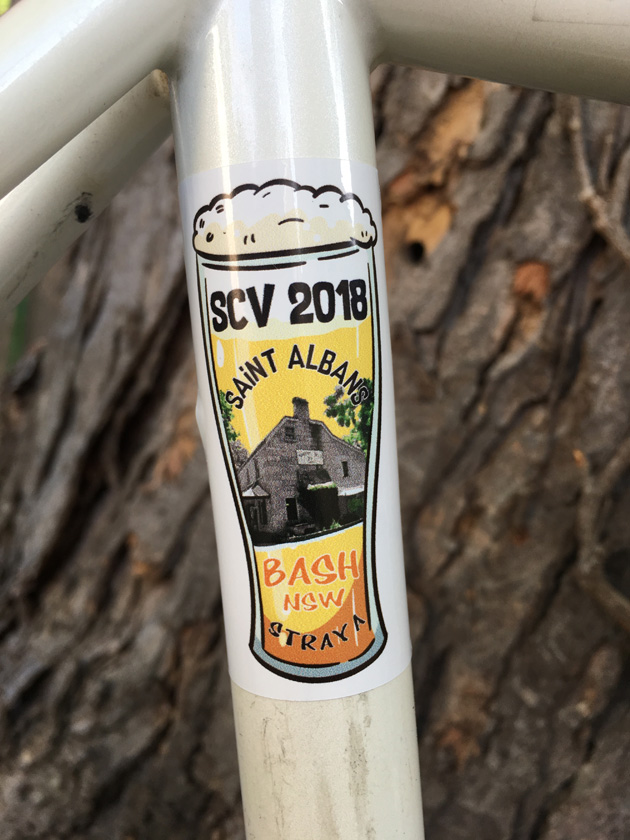 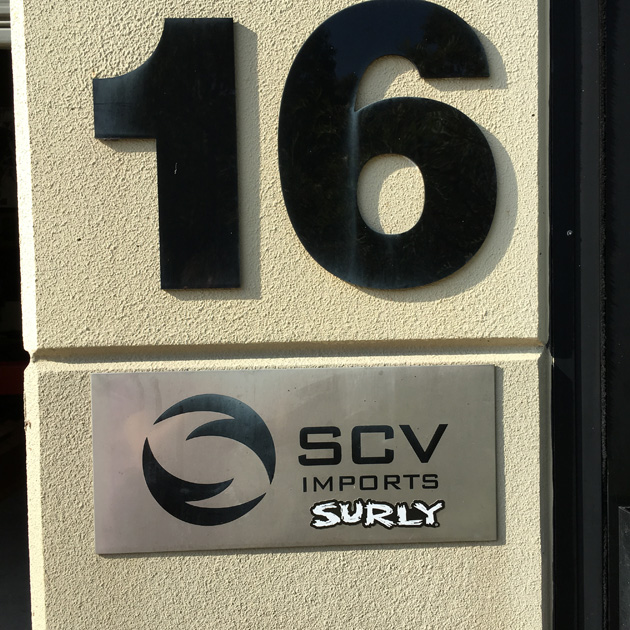 I slowly awoke from a foggy dream of kangaroos and koalas during a very long flight to the other side of the world. Back in Minnesota, we’d just experienced a late-April snowstorm, so it felt good to escape to a warmer climate. My destination was SCV Imports in Tuggerah, Australia where I would hang out for a day before embarking on an overnight ride with SCV staff and some Surly dealers. Luckily, my visit coincided with their Friday barbie tradition. We could smell the 5 lb. pork shoulder Chris Dmitrieff had on the grill as we approached SCV headquarters.

After a tour of the office and the meat fest lunch, I worked on getting the Karate Monkey setup for the next day’s ride. SCV had booked some rooms at a 200-year-old pub in a remote area of New South Wales. We needed only to carry sufficient food, water, and clothing for two days of riding.  By late afternoon the jet lag started to weigh on me and I knew I needed a good night sleep if I was going to enjoy the next couple days of riding.

The next morning, I took a cab to Stu Voysey’s (head honcho at SCV and instigator behind the overnight ride) house for some breakfast and to meet up with Pepper and Hew from Commuter Cycles in Melbourne. After a hearty breakfast — including some toast with Vegemite — we packed up the bikes and rolled out to the nearest train station. The rest of the crew came from north and south and we all met at one of the train stops in the middle. The train runs along the coast and is very affordable and more efficient than driving. After introductions, we headed out from the train station and pointed inland. Staff from Omafiets(Sydney), Metro Cycles(Newcastle) and Commuter Cycles were represented. It didn’t take long to realize we all had similar objectives for the days ahead. 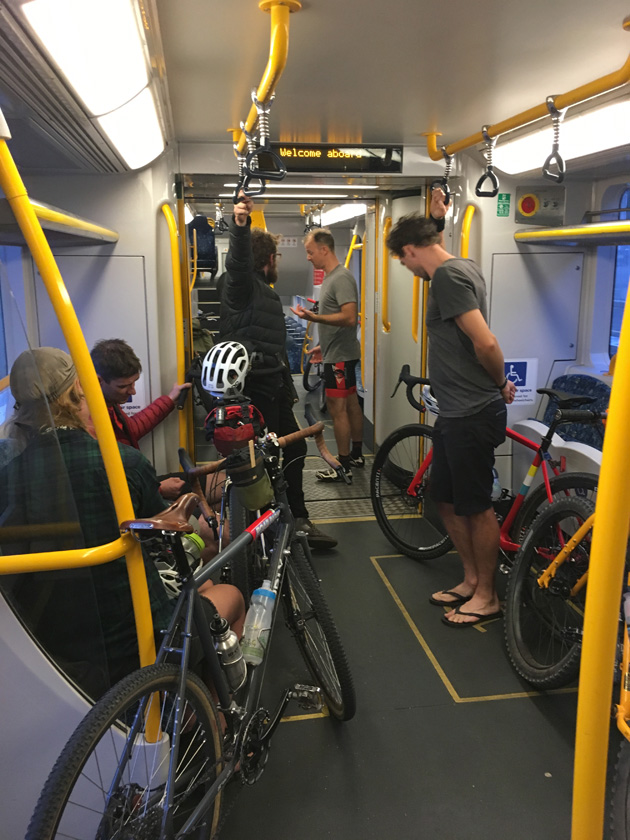 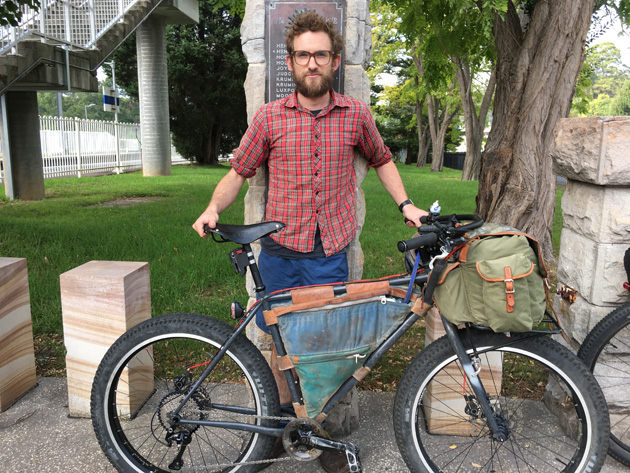 After a couple miles on paved roads, we turned onto a less traveled gravel road and started the first of many climbs of the day. Feeling a little sluggish, I diverted my attention to absorbing my new surroundings. It was much more lush and green than I expected. The sounds of birds were prevalent especially the bellbirds. They sound like a loud squeaky derailleur pully but are very elusive to the eye. It was humid with temps in the upper 60’s which made for comfortable riding. Riding all day gave us plenty of time to chat and get to know one another along the way. Our pace was casual and included plenty of Flasky stops for electrolyte replenishment. Our destination was St. Albans where we would eat, drink, and sleep at the Settlers Arm Inn. 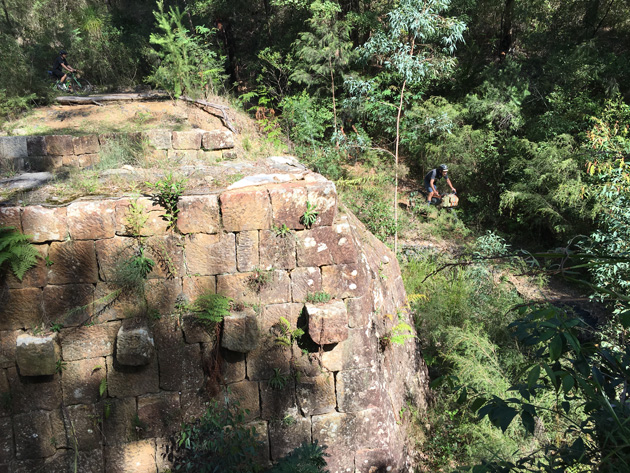 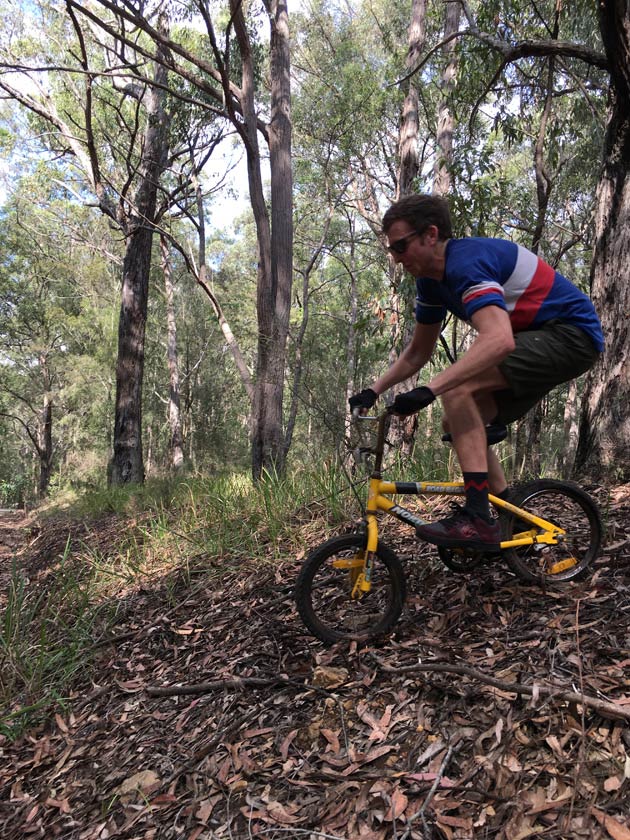 At one regroup spot we found some abandoned bikes and lawn chairs and decided to take a beverage break. Oliver from Omafiets was riding a Blackborrow with Cardice saddle bags loaded with beer. We were all more than happy to lighten his load. We then challenged others to some feats of strength on some abandoned bikes that were barely ridable. After an 89 km day, we arrived before nightfall just in time for a quick swim in the MacDonald River across the road from the pub. 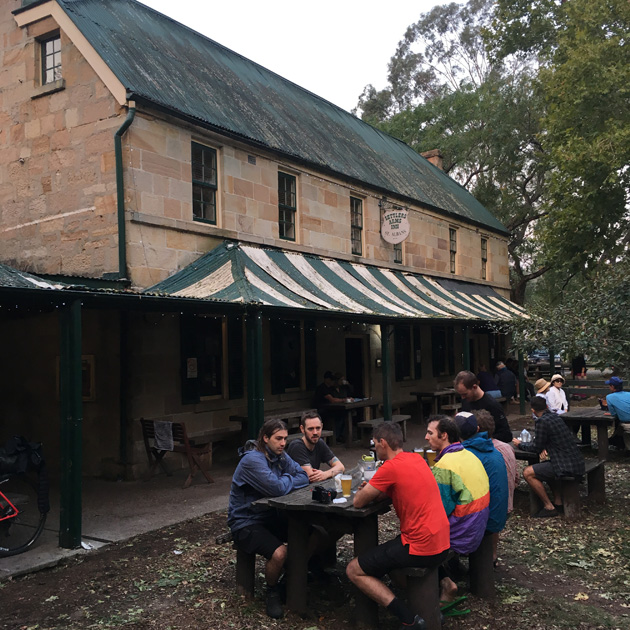 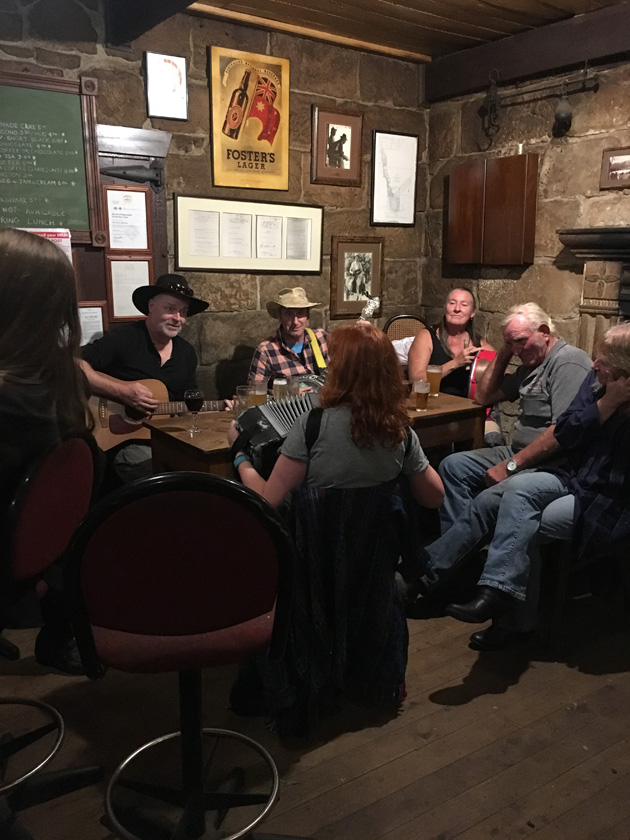 After dinner and multiple rounds of beer at the pub, we all eventually found our way to our beds for some well-deserved rest. The next day would be a little shorter but included more off-road. Day two would take us on a 200-year-old road constructed by convicts called The Great North Road. The road was built by hand and has culverts and retaining walls constructed with carved sandstone blocks. The bedrock is primarily sandstone and the road consisted of sand, gravel, and both smooth and eroded sandstone. Some of it reminded me of riding in Moab. Most of it was ridable and included some interesting technical climbing and descending. The Karate Monkey was a little sluggish on the previous day’s gravel climbs but shined on the technical trails of day two. 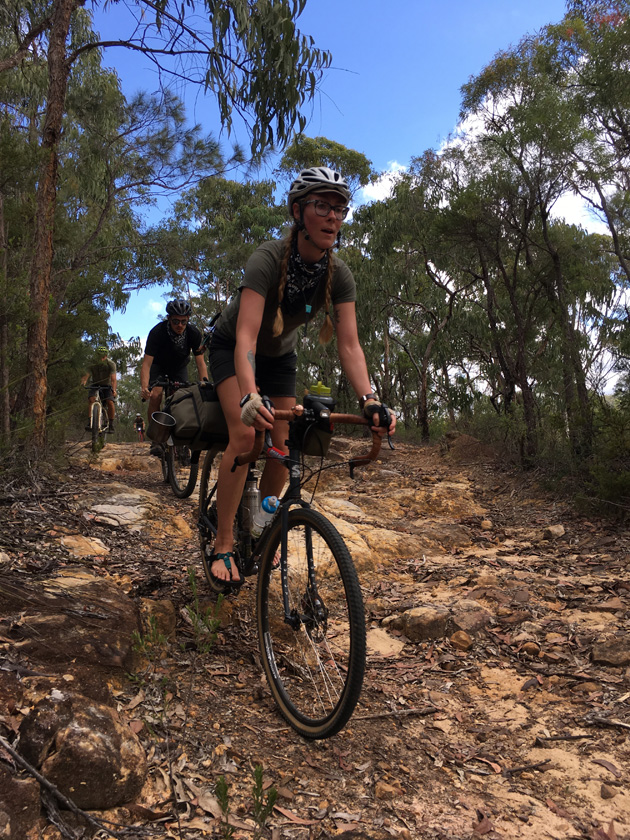 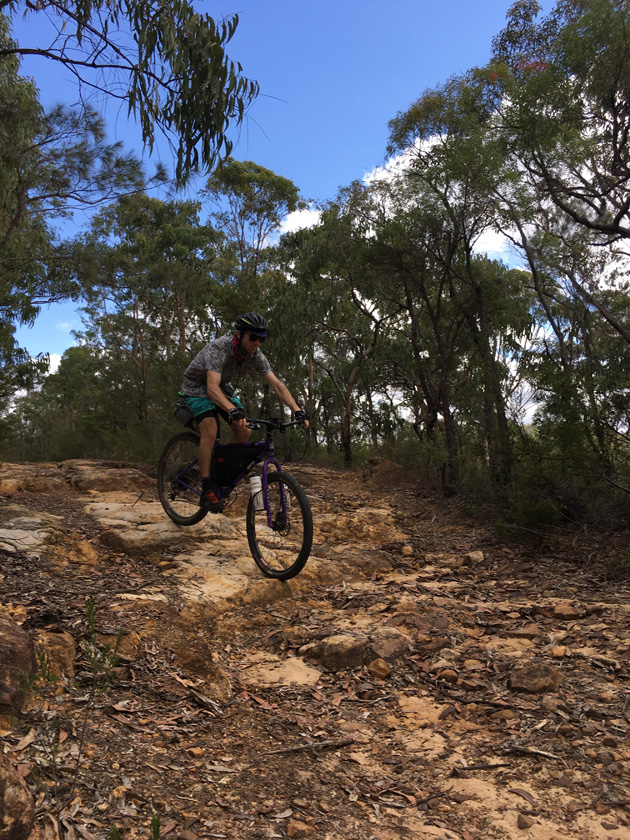 Everyone had a good time talking business, bikes, and past rides. Many of the shop employees, owners, and SCV staff had never met each other in person. They all agreed it was a great idea and were already planning a trip for next year. I saw my first kangaroo with a couple joeys and plenty of dead and swollen wombats along the side of the road. We ended the day back on the coast at a Pub before jumping on a train and going our separate ways. 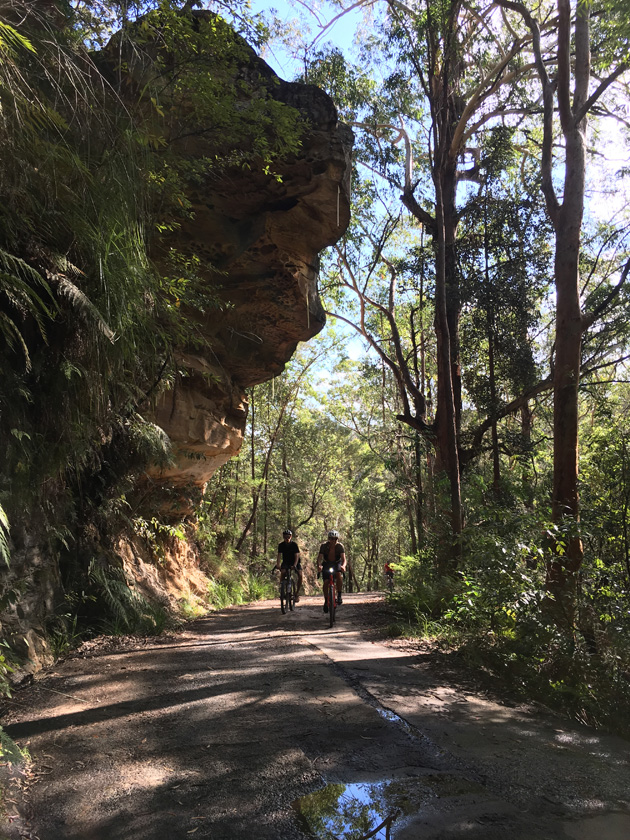 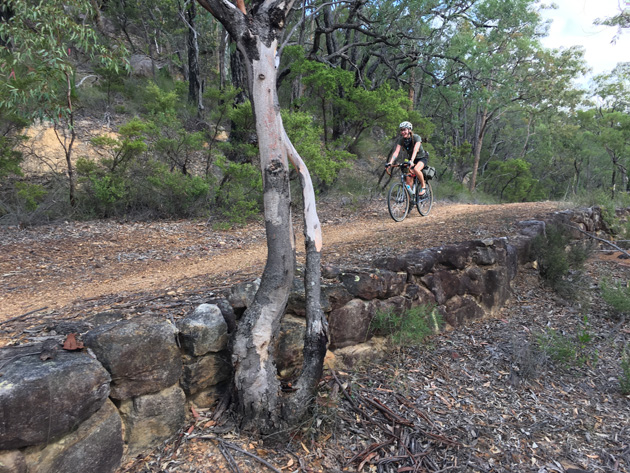 The day before I returned home, I had some time to visit a couple shops in Sydney. Omafiets offered to loan me a demo for the day so I walked from my hotel to their shop first. Their shop is next to a protected cycleway with bikes going by all day. They started the business importing containers of used Dutch city bikes and slowly grew the shop in other categories. They focus on commuters, cargo, touring and bikepacking. They had a good mix of Surly bikes including a Big Fat Dummy hanging from a hoist. 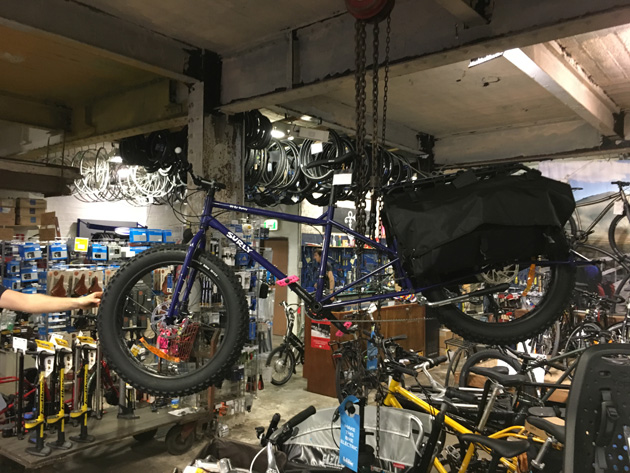 They set me out on a Brompton demo to use for the day so I made my way south to Summit Cycles. It was a little crazy riding on the wrong side of the road in busy traffic and made for an exciting ride on little wheels through uncharted streets. Summit focuses on mountain bikes and they do a lot of custom builds. I met up with Adam from Summit and a couple Surly Karate Monkey owners at Lord Nelson Brewery for an evening of tasty microbrews. 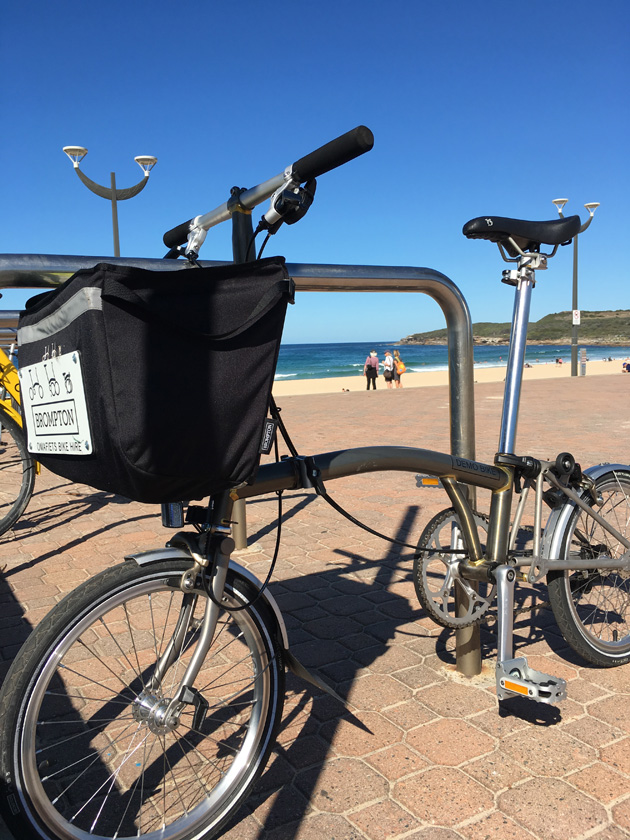 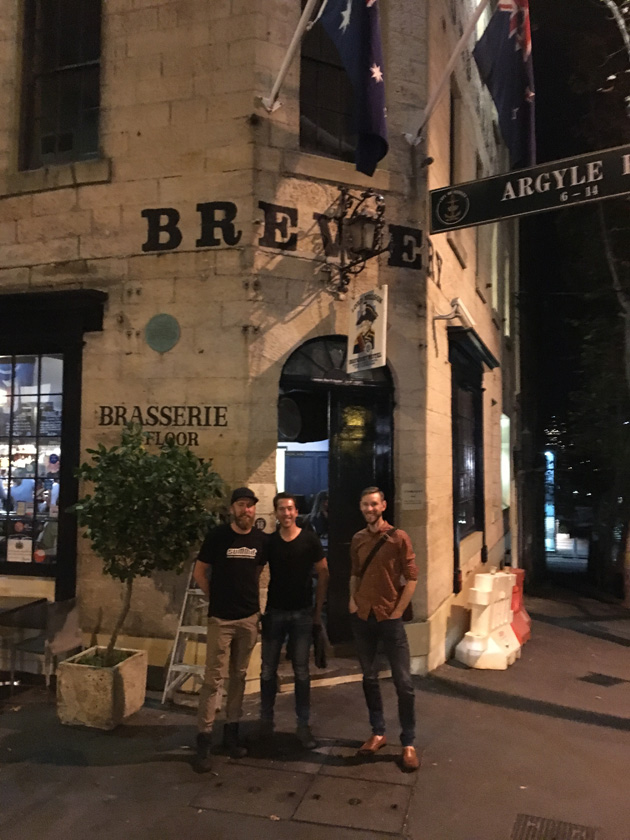 Thanks to Stu from SCV for hosting a great event and the opportunity to connect with some passionate Surly dealers of Australia. Cheers!