The phrase I hear most often when traveling with my Moonlander.

Every year in the spring, my buddies and I hold a trout fishing tourney near the Boundry Waters Canoe Area Wilderness on Snowbank Lake. The winner takes home a coveted prize that we’ve named Brenda. Now before you get any ideas, Brenda is a coolie/trophy that signifies you are indeed tourney Champion. It is a highly sought after title and the competition is fierce. Last year while making final arrangements, we learned there was at least one foot of water around the shore. I am a bit sketched out by driving on the ice anyway and I don’t enjoy slogging a sled for five miles. Last spring, it turned out to be the warmest March days I have experienced in my life here in the nort-land. It was very surreal ice fishing in seventy degree weather. Cracks had formed, opened and re-froze. 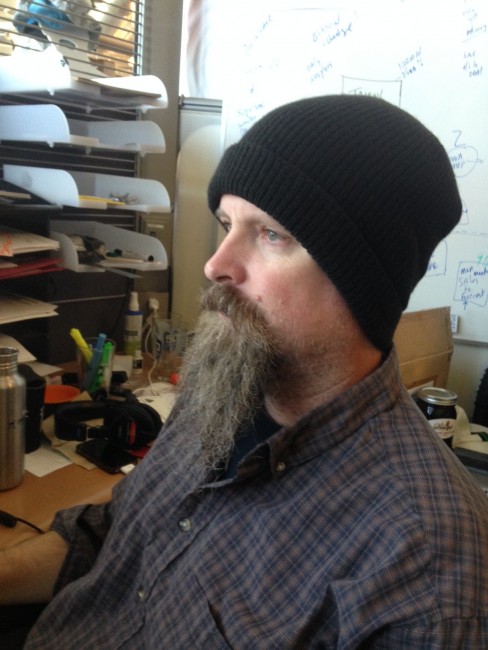 There were even tiny rivers of water creating interesting and somewhat scary mini landscapes. Riding bikes on frozen lakes is one of my favorite winter pass times. So why not use that to my advantage? Fat tires to the rescue! The best part is that set up is easy.  All need is some rope, a couple of carabineers and some PVC tubing.

Cut three pieces of PVC. One piece a bit wider than the tires and the other two equal size to run down to the sled to keep the rope out of the tires, chain and spokes. Run the rope through the PVC, tie it to the sled. Attach to the seat rails using two carabineers and you’re off. 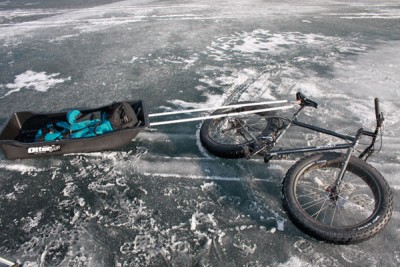 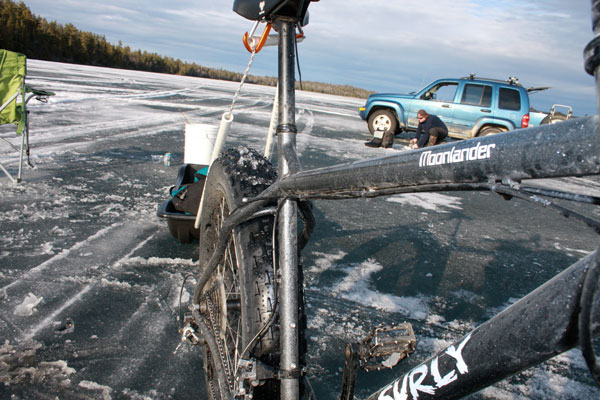 My plan was all in place and I was anxious to give it a try. The first night, my friends and I were testing the Moonlander, drinking beer and whisky when SNAP!, the chain broke. The worst part is I had not grabbed my chain breaker tool when I left town.  Lesson learned.

The next morning I headed to Ely to see if I could fix my rig. I thought this would be an easy task in an outdoorsy town. After all, Ely does have a bike shop. Though it meant missing time on the ice, I was determined to get my rig repaired. Once in town, I was disappointed to learn the shop was closed for the season. Being that it is a small town, I thought I would ask at the gas station if he knew who ran that store. He thought about it and said, oohh yaaah I know Janet...uh let’s see last night was wednesday right? Oooooh yaaaah you’re not going to catch her. Last night was bowling night so she’s going to be tough to get a hold of.  I then headed to the outdoor shop in town. They looked around and tried to call a couple of guys. One of their high school age employees had one but he was in school. I even checked the hardware store in the outside chance somebody might know someone. I must have met everybody in Ely and everybody was really cool, but nobody had a the tool and most of them just gave me a strange look when I tried to describe it.

Dejected, I headed back out to the lake. I had seen a sign on my way in that said 5,000 lures in stock. I thought I would stop and check it out, maybe that would cheer me up and while assisting me, I met the owner of Red Rocks Wilderness store asked me about my fat tires, of course. I took the opportunity to ask him if he happened to have a chain breaker tool. It turns out he used to run that same bike shop in town and he promptly gave me the tool I needed and even let me borrow it for the weekend. Solid. I bought a couple of lures from him and I was on my way.

I was really anxious to pull the sled with my Moonlander and no surprise to me that thing ripped through the ice like the abominable snowman carrying Santa’s sleigh. As always it is important to remember to deflate your tires to 5-10psi to maximize traction. I am always surprised at the number of folks who do not know this so that is why I mention it. The only place I had trouble was on the incredibly smooth, wet ice. If the ice had any crystals on it, I was golden.

Here is a sample of of our sought-after fish. No I did not catch it. 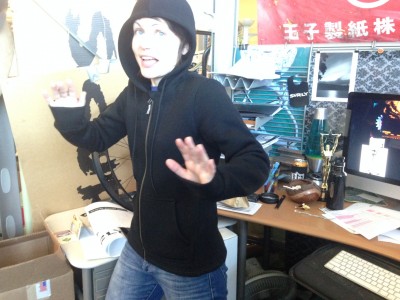 I did lose the tourney but I had one hell of a time doing it. A couple of slimy eel pout was my only reward. Eah, they eat pretty good if you can stand to look at the slimy bastards. 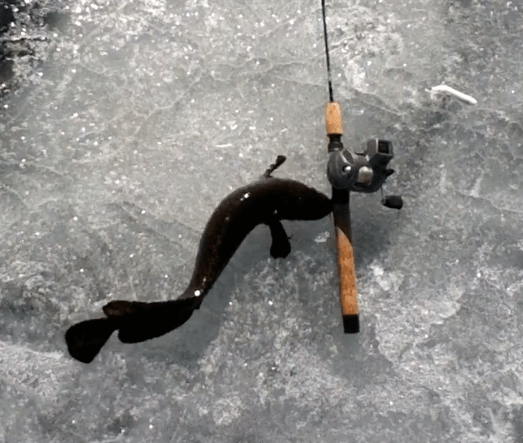 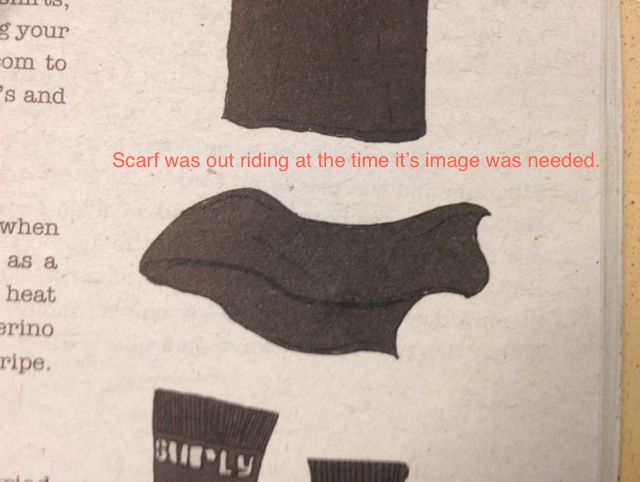 Wow what a machine the Moonlander is. Big tires? Fuck yeah. But we don’t just make em big for no reason, there is a purpose for everything we do. That is one of the many things I love about Surly. We make purposeful bikes to go were no other bikes and do things other bikes can’t even attempt.  The moonlander is no exception. 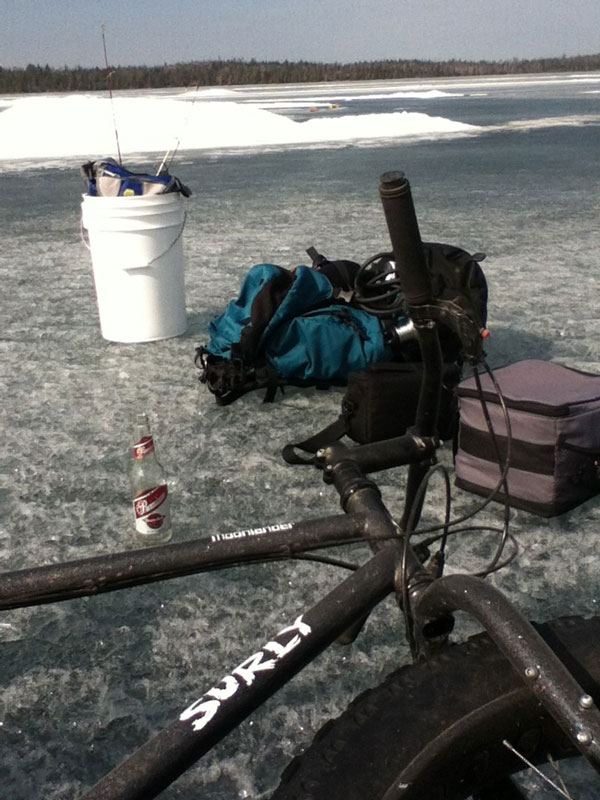 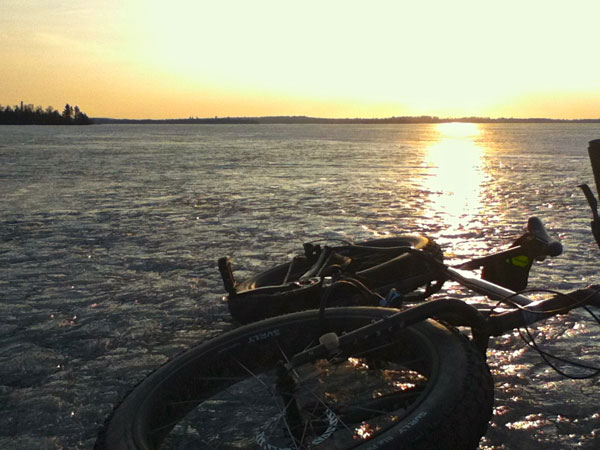 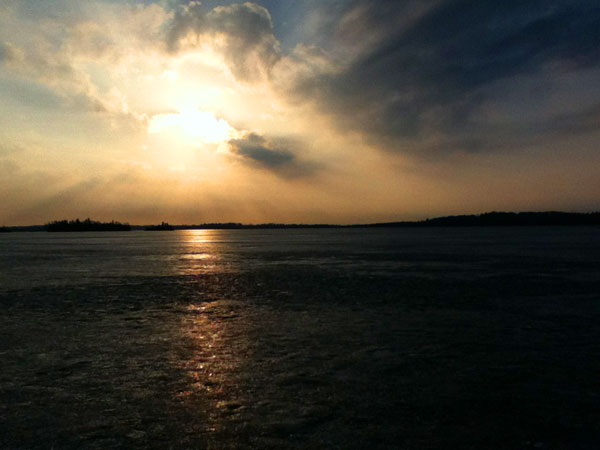 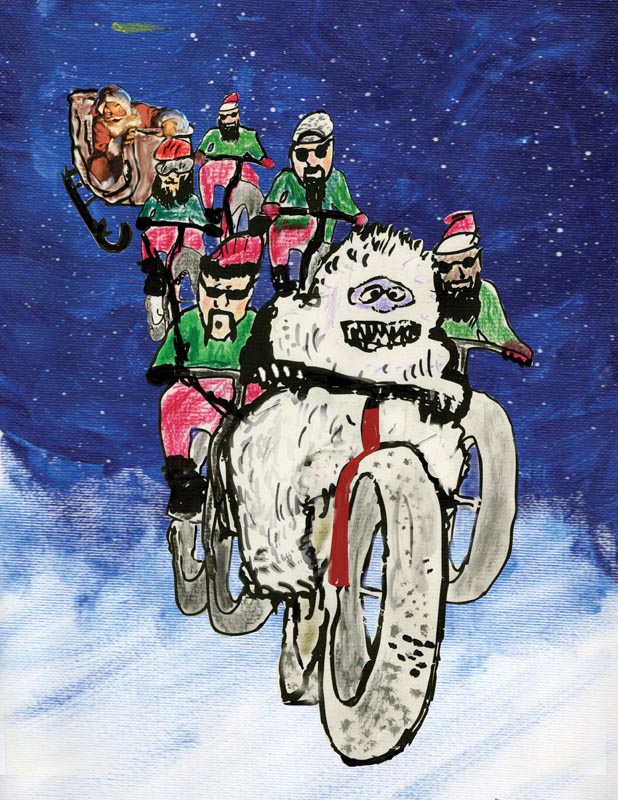