Don’t Be a Dick

One time, not too long ago, I was at the start of a "race" in Dorset, England. Our good friend Charlie was putting the whole thing on and gave the opening address and rules meeting on a sunny hillside overlooking the sea. It was a pretty good spot. Charlie said that there was only one rule for this event. That rule would cover the way we were to comport ourselves among other riders and with traffic on the open roads. It would help us find our way if lost, and it would keep the trails clean and free of the sort of detritus that a few hundred single speeders might cause to happen. It was this: Don't be a Dick.

That rule covers a lot, and may well be all you need to govern your existence. I suppose it's the Golden Rule re-phrased, but I think it goes deeper than that old thing. The rule of not doing unto others what you wouldn't want done unto you smacks of self-interest and not altruism. IF you don't want it done to you, THEN don't do it to anyone. What if you just shouldn't do it, period? A wise man once told me that integrity is painting the spot on a house that nobody would ever see, because it ought to be painted. Roll that around in your noodle for a while.

So, yeah, Surly, right? Buncha dicks designing bikes and parts and flipping off the camera, right? Who are we to even speak of integrity and non-douchey behavior? Maybe it's the fact that the a-holes I grew up riding with were the kind that would never leave someone behind with a flat? Maybe the Wednesday Night Rides of yesterday were filled with the kind of people that would give you their last beer if you were thirsty and spend a few minutes picking up the empties? Maybe it wasn't like that. Frankly, it's hard to remember, but I think it was. Sill, I don't think the outward appearance always tells our tale.

Either way, what got me thinking of this today was the internets. I was reading some comments on the Surly Facebook page under the photo of a bike. One thing about which you can be certain is that people will comment negatively about whatever bike it is - not a lot of people, but almost always at least one. "Dude, too bad about your seat being too low." "That bar tape is ugly." "I don't like the way those tires look." When you post things like that you're being a dick. Facebook and Instagram and their ilk have given us carte-blanche to tell people how much they suck - easily, and up to the minute. Frankly, I don't like it. Nobody needs to hear your negativity, for real. I try not to go negative on people, but haven't maybe been 100% on that. It's hard when funny equals being a dick sometimes. I know I've been guilty of that. But, really, people are proud of their bikes - that's why the photo is there - and there's no need to give your negative opinion in those situations.

And guess what, maybe you've seen evidence of this, but it's election season here in the US. That means people are trying to convince us that they'd be better leaders than the others. But, there's one thing that many (most?) of us (and them) are not doing. We're not not being dicks to each other. I understand that people have very important personal beliefs at stake, and I think I'm one of them. But, what's not helping is the anonymous internet hollering and shit-talking that has devolved the democratic process in this country to the level of a second-rate pro wrestling match - and not the Jimmy Superfly Snuka kind with awesome moves and high drama. Maybe instead of posting that thing about how funny-looking or stupid the other side is, you just don't do that? How about maybe you check out your beliefs and work FOR them, instead of working against something and, you know, being a dick about it. Just thinking out loud here.

It's my opinion that the world is a pretty cool place. I've been to a lot of spots on it and I've always been able to find people I really like there. They may have lots of different ideas about how things ought to be, though. Maybe some of that comes from the same place yours comes from - wanting things to be better. Maybe you just disagree on what that looks like. It doesn't mean that they're idiots. But, it would sure help matters (and, really, it's the only thing we have complete control over) if we weren't dicks. 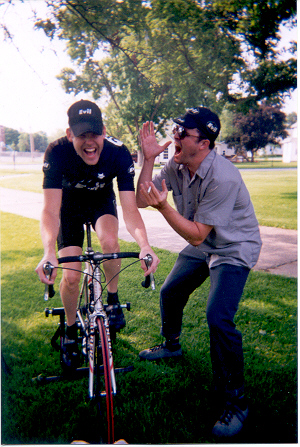