Pack Rat: Party Up Front, Party In The Back

We’ve reached a point in the current expansion of the bike universe where riders are bombarded by a dizzying array of wheel and tire sizes built into all types of bicycles. This essay isn’t about that. It’s about Pack Rat, a version of which I recently built up from a frameset, as well as a little bit about why SURLY does some things the way we do. 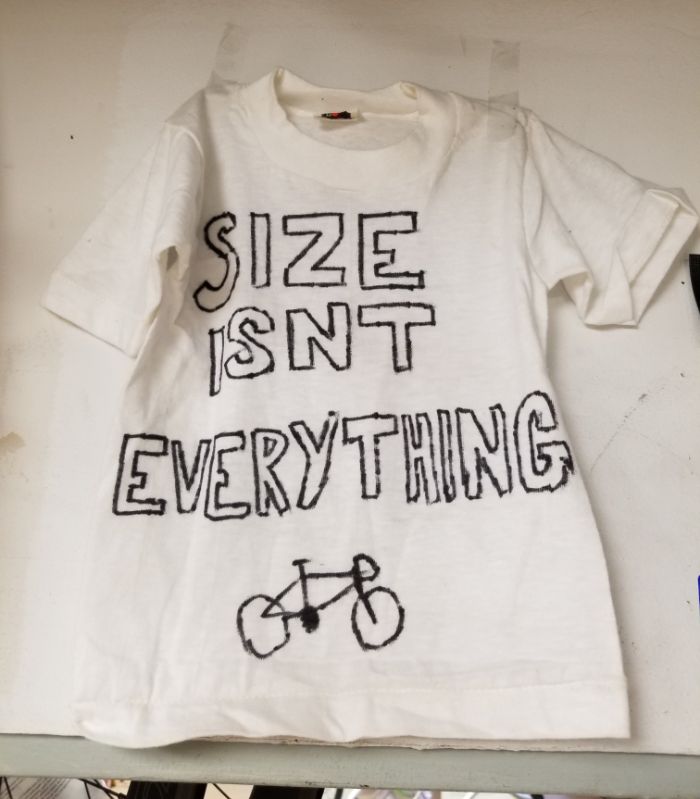 First off, I have some bad news. We’ve been drawing straws around Surlyville to see who might break it to you first. Well, I’m sort of a “rip off the Band-Aid” type of person. Plus, we never actually drew straws, so I get to be the messenger.

Folks who are looking to get a complete Cross-Check bicycle from SURLY are going to notice a shortage of said beasts for the next year or so. Interested parties will still be able to get Cross-Check framesets but complete, stock bicycles won’t be available for a long while.

Your humble author fully acknowledges that announcement, and the reality it portends, might suck for some folks. Rest assured we are actively working on it. In the meantime, I’d like to draw attention to the Pack Rat, a model which does everything the Cross-Check does and arguably more.

You might guess that I am seeking to soften the blow of my news by telling you the Pack Rat bike will be available while the Cross-Check will not. You’d be correct in that supposition. I’ll get to that in a minute. But be forewarned that if you have your heart set on a Cross-Check bike, and your local SURLY dealer has one, you’d be best served to get while the getting is good.

Now the reason, dear reader, that I begin my tale thusly is two-fold. First off, someone had to break the news about Cross-Check bikes. Secondly, I’ve observed that the Pack Rat is a confusing critter for some and may have caused many to look beyond it when considering the wide-world of options they have among the SURLY line of bicycles. And maybe the wheel sizes we offer in the Pack Rat (26” and 650b) have contributed to the confusion.

Since the beginning SURLY has designed frames to fit a wide range of rider sizes. We’ve also chosen wheel platforms that scale to those different frame sizes within specific models. Granted, with Cross-Check we used 700c wheels across the range. You see, it was one of the first frames we introduced way back in the early Aughts.

When we developed the Long Haul Trucker we debuted 26” wheels in the smaller frames sizes. This allowed for optimized standover height and mitigated toe overlap. Different wheel sizes have myriad advantages and some drawbacks. Again, this essay is not about that. But it’s worth noting that when we set out to build Pack Rat – a light touring rig based on Cross-Check and optimized for front-loading – smaller wheels had the advantage of not only accommodating smaller riders but most importantly keeping rack height lower. That, in turn, helps smooth out carrying the cargo up front.

Fleck, what’s up? You just wrote 516 words with only one photo so far in this blog?

Fair enough. Let’s remedy that and get on with the story!

Every bike project starts somewhere. Perhaps with a unique component one has acquired. I once dreamed up a new build because I had a spare Chris King headset knocking around my workbench. No matter its genesis a frame-up build needs a purpose, aesthetic intention, a reason for being.

With my Pack Rat I knew I wanted it to be a single-speed. Many years ago a single-speed Cross-Check was my daily driver and, well, I’ve always missed that bike. Also, the Steamroller I acquired last year kept scratching old itches for simplicity and elegance. I wanted an urban hauler with convenient loading options, so Pack Rat’s front-load mastery was exactly what I was seeking. My token component to begin this build was a well-worn but dry-docked Brooks B-17 in British Racing Green. I knew it belonged on a green Pack Rat frame. 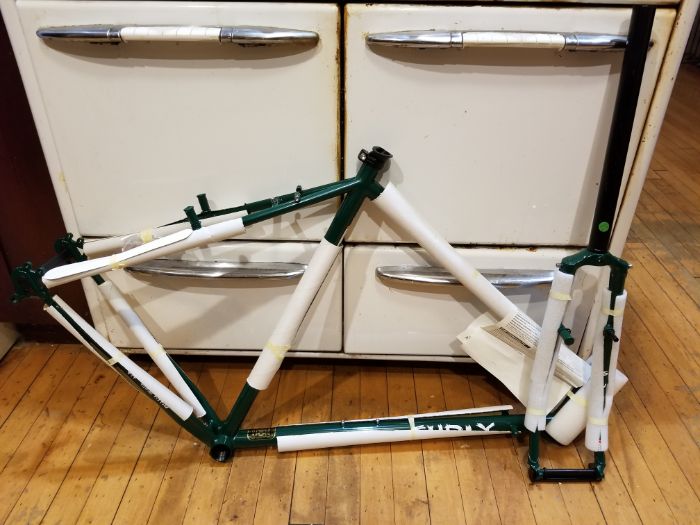 I know, I could have removed the protective wrapping but I was just too excited. Every time I unbox one of our framesets I recall the first time I ever built up a bike from a bare frame. It reawakens that same sense of wonder as one tries to imagine how an abstract assembly of tubes will look when built into a complete bicycle. Can you hear it? That frameset is buzzing with potential! 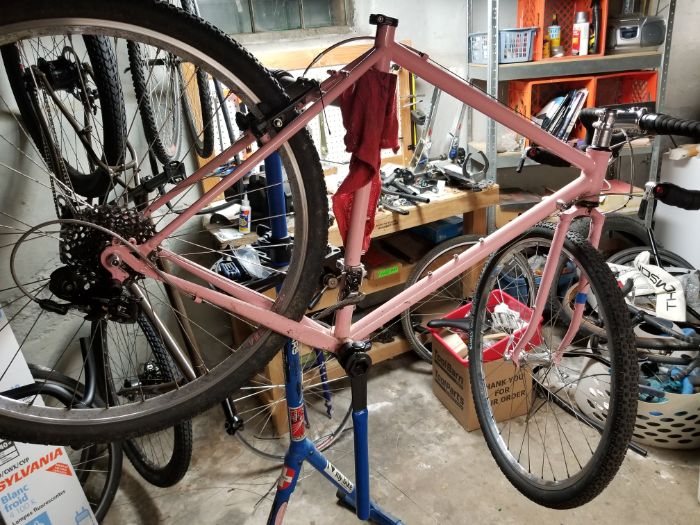 Once you have the inspiration it helps to have some parts. In this case I had a previously geared build from which to transfer wheels, crankset, and some other stuff. Invariably I always have a few components, like my old Brooks saddle, that have been swapped over among several bikes over the years. It’s nice to reminisce previous builds while sprucing up well made bits and sending them off on another journey. 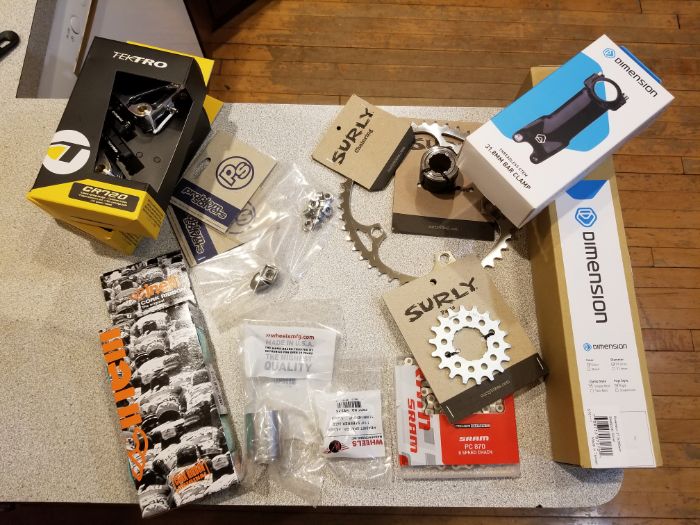 When it comes to filling in necessary parts options abound. I prefer affordable but highly functional stuff. Even before working for Surly I was a fan of our stainless steel chainrings because they last a long time. In part because they’re reversible. (Did you know that?) Our cogs and single-speed spacer kit make the hub conversion simple and clean. Not included in this photo is my choice of handlebars, which I bought anew. We’ll get to that in a bit. 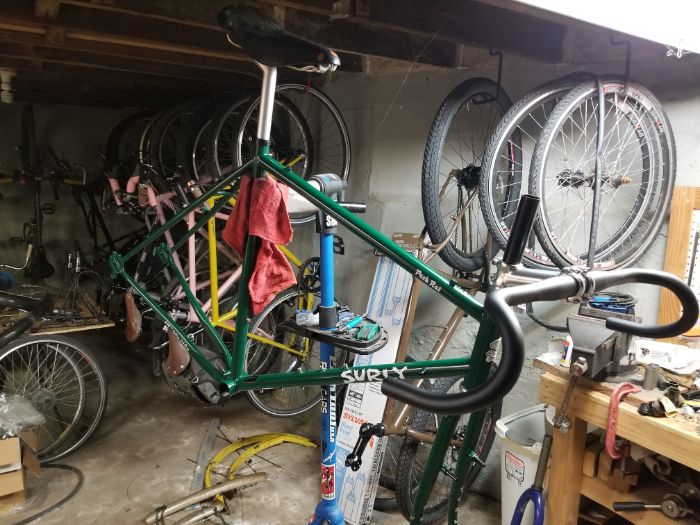 This is the point where it all begins to come together. The fork, stack spacers, stem, handlebar, seatpost, and saddle are roughly installed. Measurements start being taken to ensure placement. Shit gets real, as “they” have been known to say and one must start paying attention to details.

I’ve been riding a lot of flat bar bikes of late, so I decided to run drop bars on this Pack Rat. I’m a big fan of Salsa bar profiles and have ridden most of them. This is my first go-round with the Cow Chipper. Flared drop bars are not only easier on the wrists, but also play well with our Porteur House bag mounted atop the 24-Pack Rack. 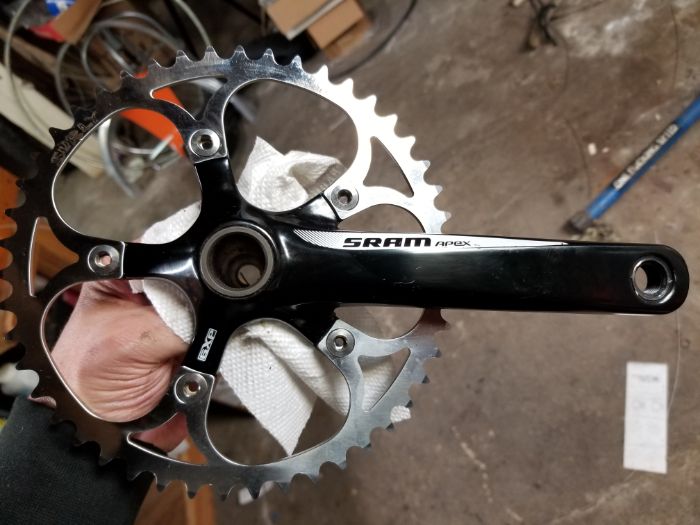 In my opinion SURLY stainless steel chainrings look amazing on just about any crankset in the world. As long as we make a BCD (bolt circle diameter) to match. And provided it isn’t one of the myriad proprietary chainring-mounting designs. (Life was so much simpler in the old daze …) 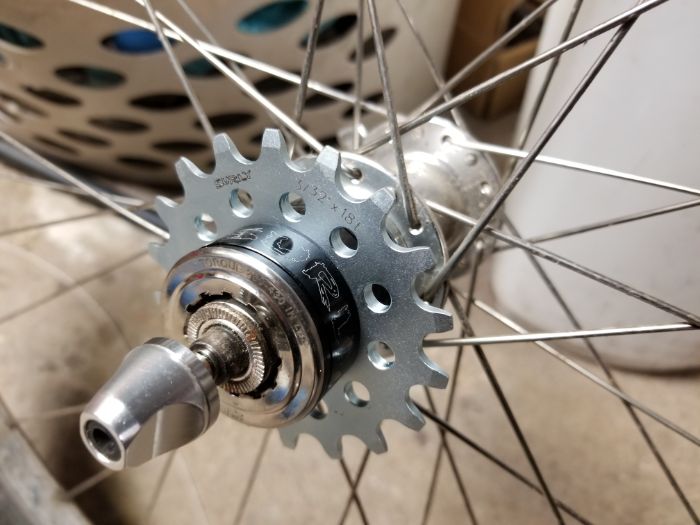 This kit along with our single-speed cog is an erector set of beautiful. If you read the entire instructions for the single-speed spacer kit you’ll have an honorary degree in something. Suffice it to say this spacer kit covers your bases.

I always get asked so I’ll mention it now. I set up this bike with 47X18 gearing which is a decent gear for the crumbling streets of Minneapolis. If you’re curious about single-speed gearing you can read the SURLY Spew about it right here. 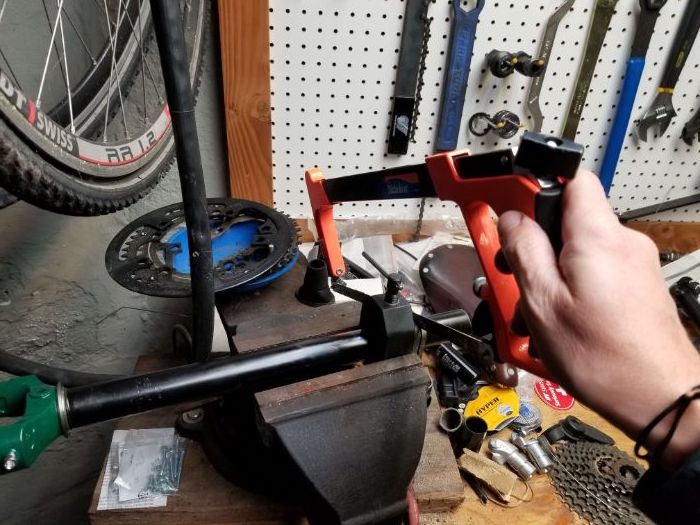 I routinely hand cut wood joints to tight tolerances but this part of building a bike still makes me measure five times, stop to measure again, then cut. It’s a big deal since you can’t glue the steerer tube. I invariably aim high. I’d rather run a little stack above the stem. One might want to change bars. One’s desired riding posture may change. Having stem height adjustability isn’t a bad thing.

To do the procedure my method is to install the crankset, headset, fork, seatpost, saddle, spacers, stem, handlebar, and wheels. Set rough saddle height, level bike and measure desired handlebar drop or rise. Mark, cut, and move on. 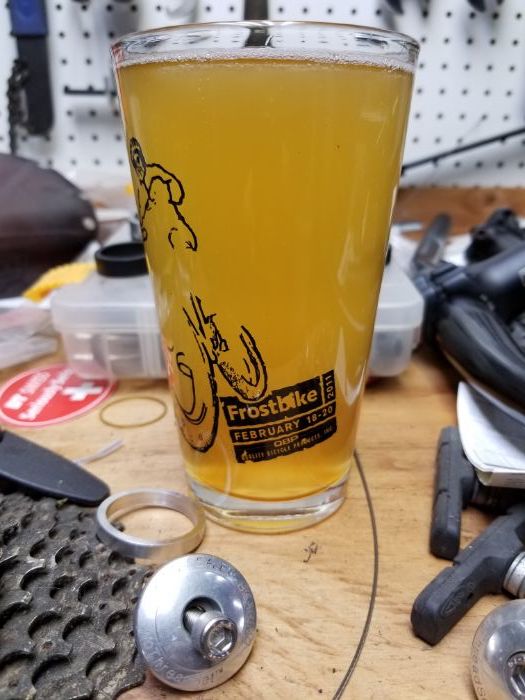 As alluded to above I am much more of a wood worker than a metal worker. I learned rather late in life that when one is cutting or boring hard metals like 4130 CroMoly that a cutting fluid or lubricant is advised. (Cutting fluid pictured behind pint glass.) 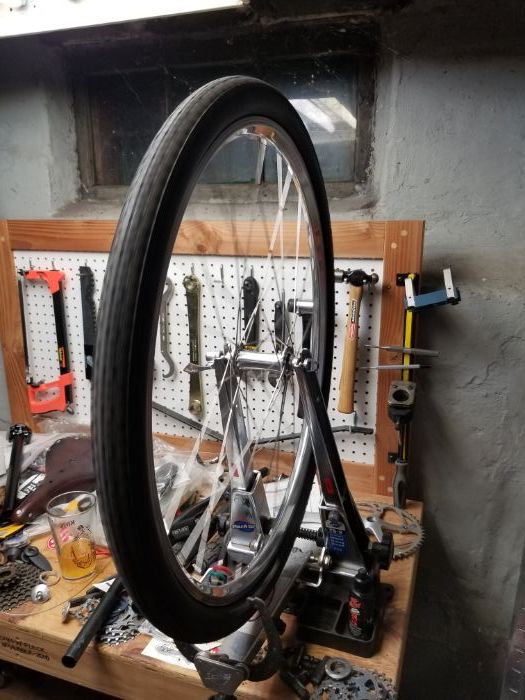 This could just be me. But every time I transfer a wheelset from one bike to another I always clean and true it. First step is to pull the tire and clean the wheel. Afterward I place a drop of lube into each spoke nipple. I do love the bouquet of Tri-Flow in the morning … . Spin the wheel for a while. True it and you’re done. 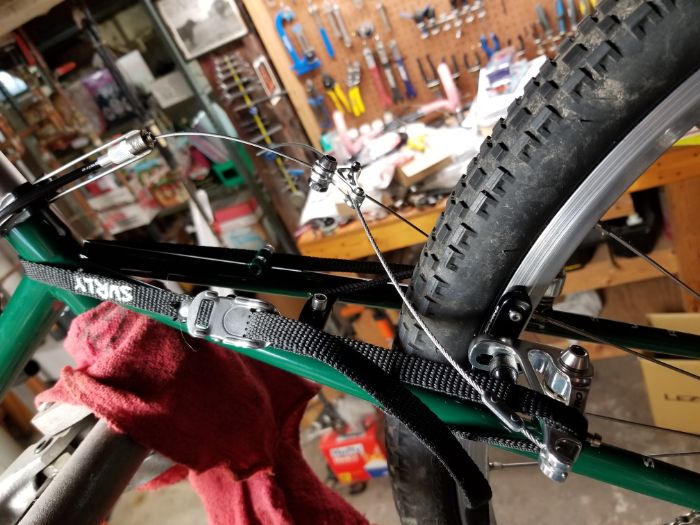 I mean, really, why doesn’t everyone own at least half a dozen of these things? 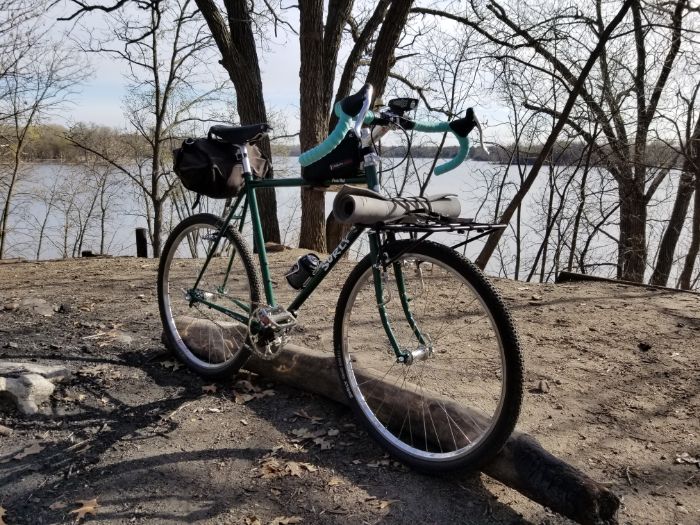 Then there is always the point when you’ve built the damn bike into a safely rideable form. Nothing left to do but take it outside and ride it! All the better if one has a worthwhile errand to run. On this fine spring day I discovered I had depleted my supply of cutting fluid. I decided to take the scenic route to the mercantile the fetch some more! 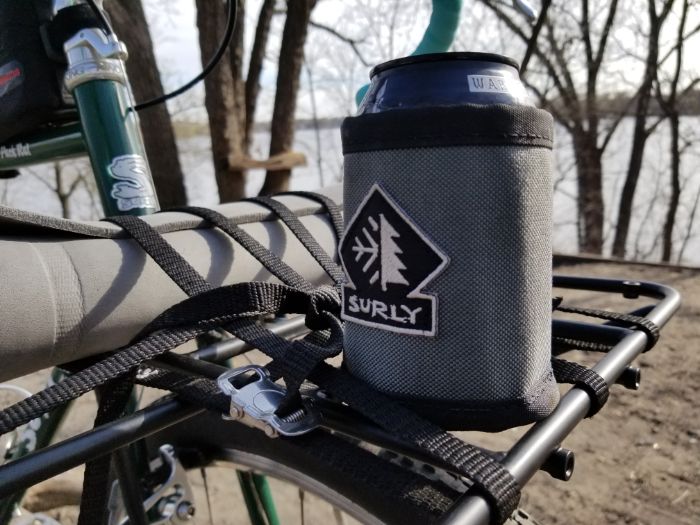 Have you met Junk Strap’s cousin Loop? Loop Straps are perfect to secure in place on a rack where they are ready for any spontaneous cargo hauling need. 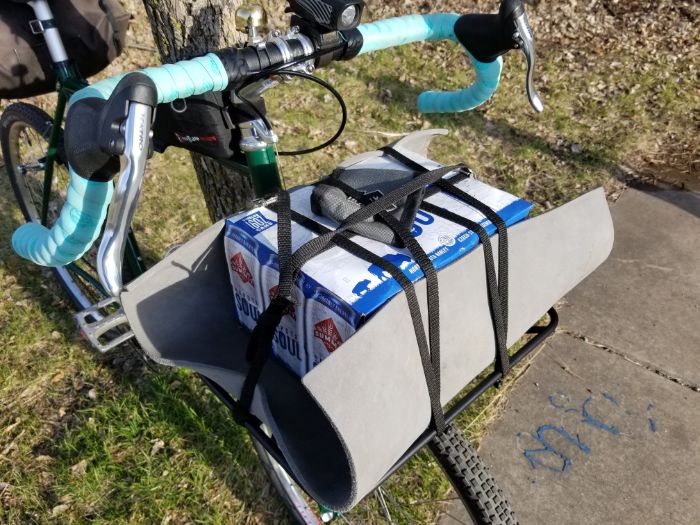 It was a successful mission. No cargo was lost. In part because precautions were taken ahead of time. I like to use an old scrap of minicell foam for hauling some cargo. It’s less jarring on those precious cylinders of cutting fluid. 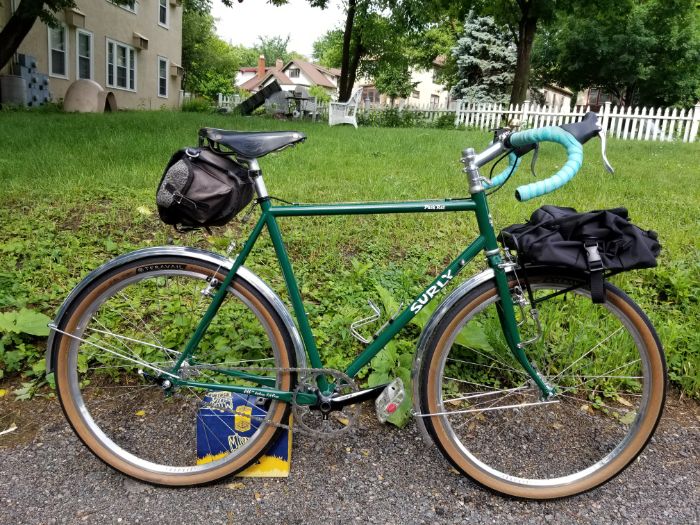 As you can see by the lush green grass and leaves on the trees I have lived with this bike for several months. Invariably things get tweaked, a few components changed. While the Knard 41mm tires that came with my wheelset were a fitting choice I decided to take advantage of Pack Rat’s generous tire clearance and plug in some Teravail Rampart 47mm tires. The addition of some classy aluminum mudguards bolsters the weather worthiness of this rig. (I know, I need to trim those stays.)

Wow. This Pack Rat turned out pretty much how I’d envisioned it in my head. It rides like a dream. There’s only one problem – it’s almost too classy for my current digs. I’d better be off now. I must go speak with my haberdasher about a proper tweed riding kit. Ta-ta for now!