Occasionally, as those of you with a number of riding options in the garage will attest, one or two of your bikes will hang unused for some bit of time. Since part of my job is riding the new stuff and gathering personal data on what works with what, how it fits, what it does, etc., often it will be an older Surly model that hasn't had my attention. Sometimes a bike sits forelorn due to a mechanical problem that has gone unfixed. You know how it goes, "Which bike will I ride today? The one with air in the tires and all the parts in the right place."

We also have a general habit here at Surly HQ of talking about the latest thing we're working on, or what's new for us out in the world for sale. Are people digging it? Buying it? Is the color pissing off the right people? We probably don't do enough work to highlight the things we've been producing for some time. That's probably a mistake given the longevity of our frame models' lives and the relatively few changes that they see over the years. So, today I thought I'd take a moment to rectify that with a little discussion on an older thing.

For me, the bike that's been lonely of late has been one of my all-time favorites - my Karate Monkey. This 22" Chocolate Squirrel frame (also Pearl Coffee, also Skidmark Brown depending on the month it was available) has always fit me like it was custom built for my six-and-a-half-foot largeness (Thanks Yafro). It's been on one thousand Wednesday Night Rides, Homies Fall Fest, Single Speed Worlds, Fruita Fat Tire Festivals, trail rides, and cross-town cruises. I love the hell out of it.

This particular frame replaced my original Camp Stove Green prototype Monkey (holy crap, was that from 2003?) which I foisted off to then-international sales dingus, Peter "GM rhymes with BM" Redin. I hate seeing a frame leave, but I also don't want to end up like Dave with 79 bikes in the garage. I moved the green specifically because the sparkly brown powder coat on the 2005 Monkey reminded me of a plate of liver and onions that had been lovingly shellacked, and I wanted that plate of liver between my legs. Sometimes daddy gets what he wants just because.

Fast forward to last week and we find that bike hanging on a hook with a mismatched wheelset (hate that), a missing left side crank arm (helping out a local), and an aging Reba bouncey fork. I had rebuilt the original rear wheel a year or so earlier due to some shipping damage that had blasted the rim, but it sat unmounted. So, last week I rallied up some replacement bits to get 'er running again.

As many of you know, we have updated our New Hubs to the creatively titled Ultra New Hubs. Instead of the adjustable angular contact sealed 7901 bearings, we're now using a shouldered axle with 6901 non-adjustable bearings. They work with quick release axles or act as bolt-ons - without having to replace the axle. Sheesh, that's pretty smart - especially for us. The other swell feature is that you can retrofit your old New Hubs to Ultra New Hub guts with a simple axle kit (Are those available now Skip? Why yes they are Consumer).

So, I slapped in the new hub guts both front and rear and that went just dandy. They go round and round and everything is sexy. Here's a picture: 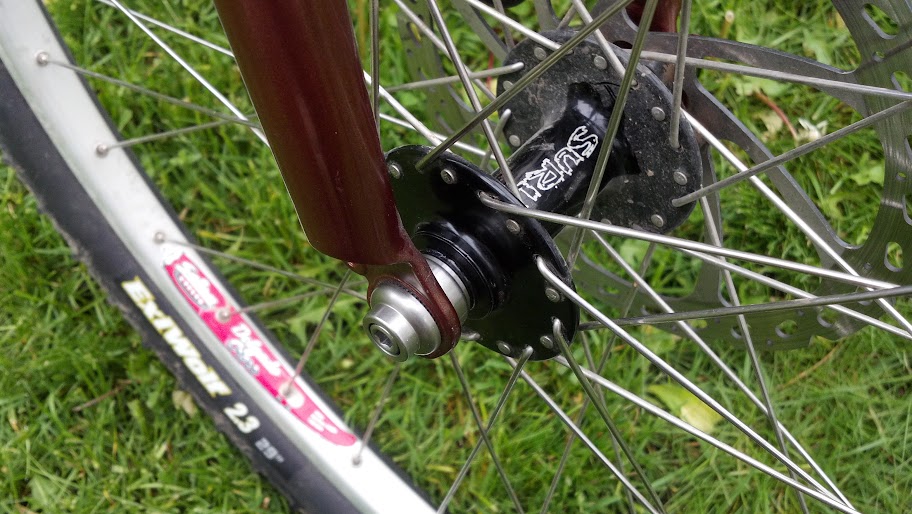 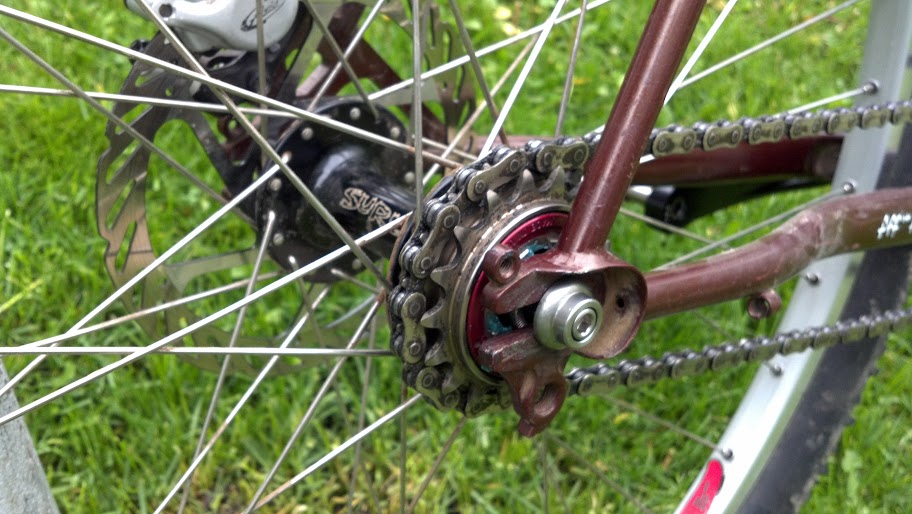 In case you're wondering, that's a White Industries Dos Eno freewheel on there. I cannot speak highly enough about this piece of loveliness. They cost some money, but they'll outlast a BUNCH of your average inexpensive BMX freewheels. If you single speed, get one. You might also notice that that sucker's got two gears. That 17/19 combo works very nicely with the Mr. Whirly up front running a 31 tooth inner ring and a 33 tooth outer ring. Inside gear's for the trail, outside gear's for trying to keep up with Brauer and Gene. 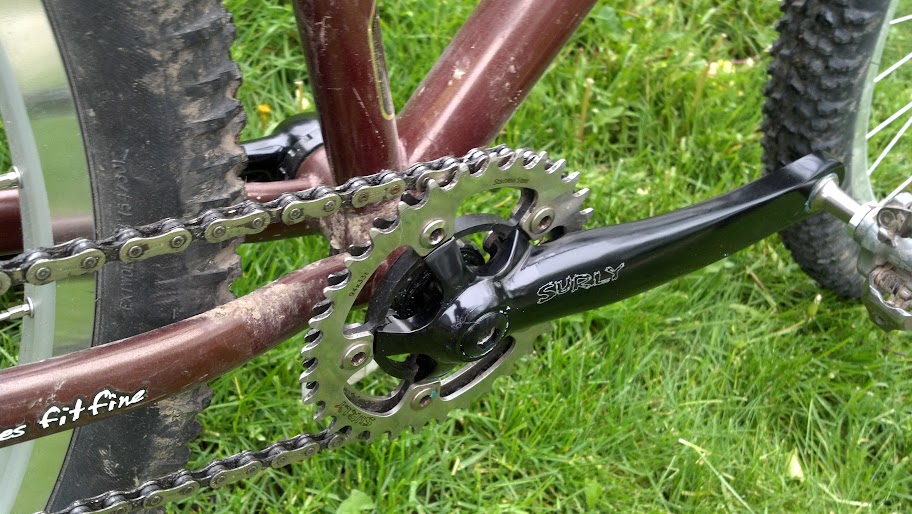 I also long-graded the crank arms to 185mm extendo-levers. As I have mentioned, I am not a small person. As such, I've always liked running 180mm cranks when I can get them. We do a 185mm in the Whirly arms and I've only just tried them for the first time in the last year or so. I'm hooked. The next order of business was finding my stock rigid fork. I sure do like the Rock Shox Reba that I've had on there for years, but the Midwest isn't always the kind of place where you need such things. Also, this frame is from the days before we jacked up the down tube for fork top cap clearance. Technically, my frame and that Reba should not have been used together, but I'm a rebel like that. I did use the old +5mm Cane Creek headset to get a little more room from the bottom cup. That worked ok. Someday I'll probably change back to a normal headset though. Shit, now I'm just rambling.

Here's the whole deal parked next to my bird-feeder. 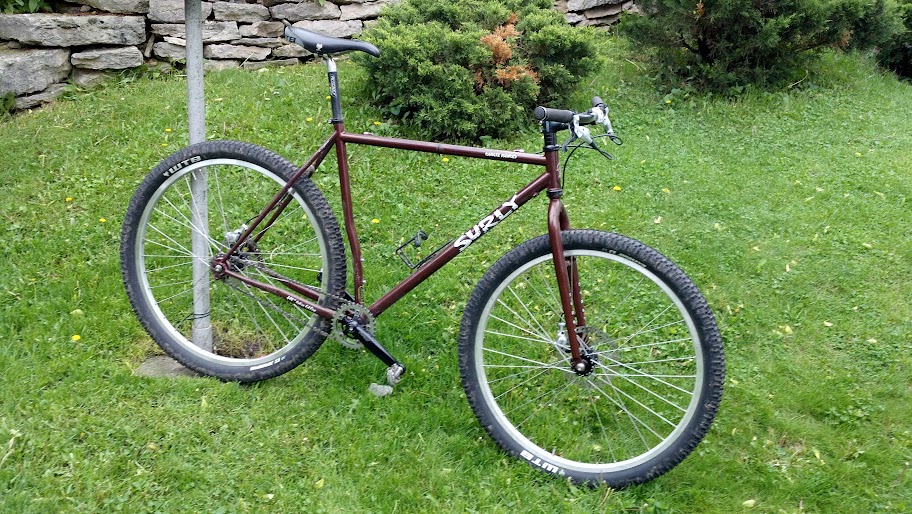 I'm an extraordinary photographer, by the way.

Oh, you wanted a close-up of that head badge? Of course you did. 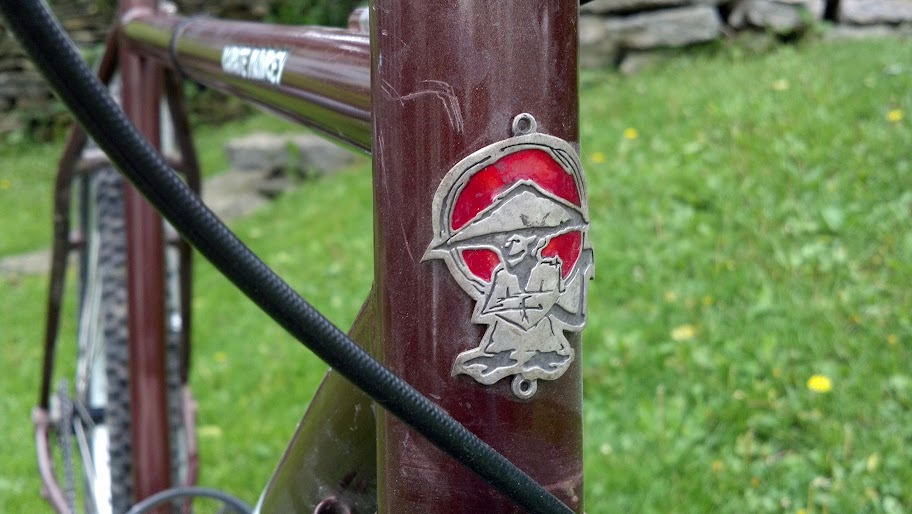 I know. I'm spoiled rotten. One million years ago we had a couple of these done by the very talented Jen Green. You should call her and have her set you up. It's remarkable that this thing has stayed on despite my refusal to screw it in place. Three cheers for really sticky two-sided tapey stuff!

So, the new bike rides like good ice cream - smooth and cool. The only unfortunate part of the process was that I'm a dumbass. While swapping the rear brake rotor from the place-holder wheel to the original/new wheel, I broke the head off of my t-25 torx head wrench. The ensuing downward motion of my brown bear-like right mitt slapped it directly onto said brake rotor.

That led to some cussing and a walk upstairs to the good sink (and to have a good cry). Along the way, I left a DNA trail on my snazzy linoleum basement landing. 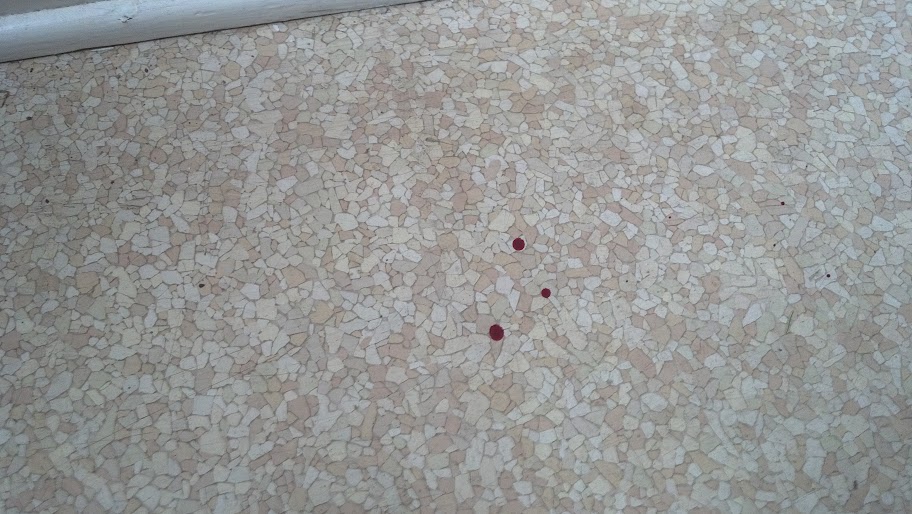 After some conferring with the understanding and lovely Ms. Bernet, we decided that I might seek the help of professionals with this particular flapping hunk of knuckle meat. As it was 10:30pm on Saturday night, I thought we might be in for a long and ugly ER stay. HOWEVER, the kind people at the Winneshiek Medical Center Emergency Room - including the dashing and able Mr. Kyle Kohls: Paramedic Extraordinaire (and fellow fire fighter) - were awesome and I was stitched up and out of there within 45 minutes. Small towns have their very big advantages.

Brace yourself, because the carnage here is a little hard to take: 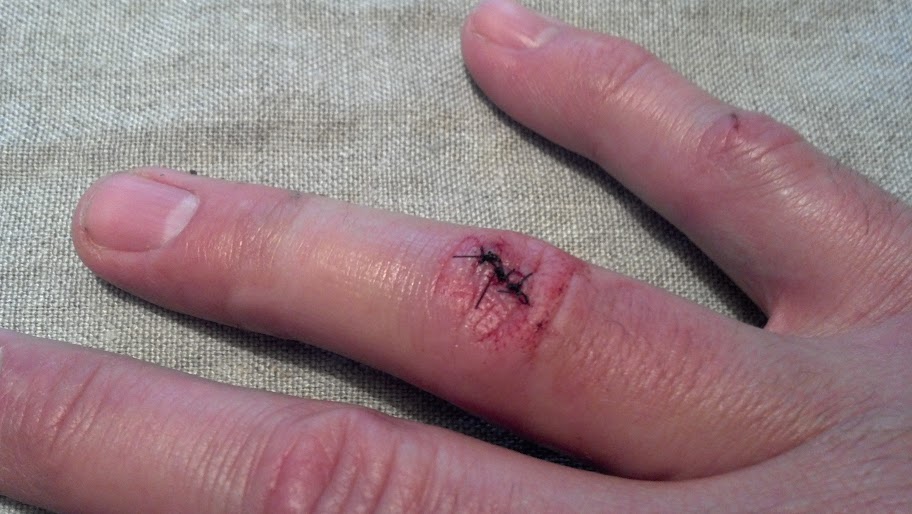 I know. I barely escaped with my life. No need to send flowers. Really. Donations can be sent to "Trevor's Busted Head dot com."

In closing, them older models we do are pretty cool. The 1x1, the Cross-check, the Steamroller? There's a reason that these still exist. We really do try to design frames and components that will stand the test of time. They're not particularly stylish, but neither is a good pair of Carhartts.

So, get that broken bike fixed and get out and ride it, ok? Even if it isn't the newest thing you've got.