Recently, our local wordsmith Sweet Beef, and I embarked on a fool’s errand to ride the Tahoe rim trail around Lake Tahoe. From Reno, we departed with dreams of reaching Northstar for the annual dealer-product rage-a-thon that is Saddle Drive…in four days. What followed in those days, I’ll leave up to Joel to tell. Look for that story next week.

To be honest fair reader, neither Joel, nor I have ever attempted such a remote-backcountry bike packing trip. Our plan was to make it in four days, but we decided to add one extra day for emergencies or recouping before Saddle Drive. We’ve both spent plenty of time in the woods and have done plenty of shorter bikepacking trips; just not sustained, self-supported rides into the backcountry like this. We hit the road with what we thought adequate gear and our own stree- like charm to keep us safe from danger.

Before we get too far ahead of ourselves, let’s back up a few months. On April 20th, Surly had a sub-24 bikepacking “Team Building” ride. As it turns out, most of the team was suffering a MASSIVE bang over from seeing the venerable Sleep the night before at First Avenue, but I won’t go into the shenanigans that ensued. The important thing was a conversation that took place that night of the Sub24. After many sports drinks, stiff pulls from random passed bottles and an assortment of campfire treats, Joel approached me and proposed the trip. Me, with a glazed look on my face said: “uh, sure.” And the deal was made.

Fast forward a few months, and I started to panic over thoughts of “how the hell am I going to get all my gear all that way up and down in elevation”. I had an ace up my sleeve, though.  I love commuting. It’s a perfect exercise in making your life more modular. You see, around the office, I get a lot of crap from the team about being a Drum Corps geek. And hey, I take it on the chin. But I’ll tell you what, I learned a holy hell of a lot from the activity. One of those things is how to be comfortable outside your comfort zone. Another is how to live out of a bag for a long time. A third, how to mentally push through physically challenging situations. (16-hour rehearsal days on tour in extreme heat were not uncommon) All these skills came in handy on this trip.

My approach on this trip was to torture test this rig, and see what kind of gear I can hammer through it day after day and see what happens.  And I did.

And now for the gear.

The bikes we rode were a pair of the new Surly 27.5 ECRs. Joel and I had very differing ideas of transporting our gear, both of which worked well for their prospective riders. Mine utilized bags, and racks, where his used a giant basket with dry bags. I called my rig, “The War Rig”, while Joel called his “The Velvet Tickler”, or something like that. My idea was to utilize a seat bag for soft goods, frame bag for tools and gear, handle bar bag for quick, trail-side access stuff, and front rack for bulkier camping gear. You see, like some people, I don’t have a ton of lightweight camping gear. I have some nice stuff, but it’s all been piece-mealed together over the years through various deals, bargains, and gentlemen’s agreements. That’s where the 24-pack rack excels. It’s perfect for a ‘Bush craft approach to bikepacking. Meaning- It’s the perfect tool to utilize the tools you already have, on a bike. No need to buy into the culture of bike-only-specific bags and gear.

So, no ultra-light cat-trowel for midnight bathroom trips to the woods. No Sir/Madam, I packed a full size entrenching tool strapped to my 24-pack rack. Let’s just say, I had some BIG holes to dig. I guess the entrenching tool was modeled after the one Russian Special Forces used in WWII, so I imagine they know something about digging in, huh? Honestly in the end, that shovel was the most used tool we brought along on this trip. During camp setup, it was used to pound tent stakes and by evening, we used it to turn out camp fires. Around the fire, I used it to air-guitar renditions of “Girl from Ipanema” to Joel as we ate our days’ rations and discussed the next day’s plan of attack. 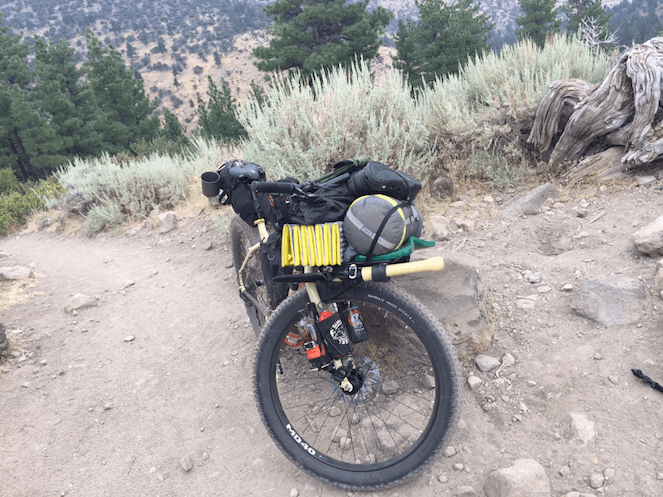 To say that I like the 24-Pack Rack is an understatement. This rack is so damn rock solid that I have a hard time finding things I can’t strap to it. In the month prepping for this trip, I would overpack my backpack and strap it to the front rack via some loop straps and ride all over the Minneapolis metro conditioning my soft Midwestern lungs for the upcoming high-altitude evisceration that they were about to be subjected to. On the front rack, I strapped my compression bag, holding my Nemo Hornet tent/rainfly and Nemo Moonwalk 30-degree bag (the tent poles were strapped in separate bag on the rack too), my ass pad for sitting around the fire, and Therm-a-Rest Z-Sol ground pad. Underneath, I bolted on some manipulated old fenders that held my Cold Steel Spetsnaz model entrenching tool. On the other side, a Bahco Laplander 8” folding saw.

From the bars, I mounted a Revelate Bags Sweet Roll. Yes, I know that it kind of defeats the purpose of a front rack, but at the time, I had limited drybags, and thought that the medium Sweet roll would be the perfect bag to pack my hammock system for shorter trips with my Straggler as well. So, in the Sweet roll went: 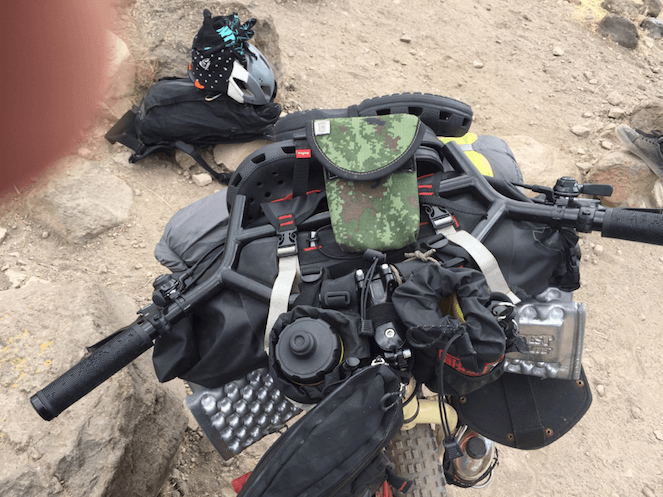 On the exterior cargo hold of the Sweet Roll, I packed my Therm-a-Rest air mattress and Trash Bags Cell phone holster (for photos). To the exterior, I utilized junk straps to keep my crocs handy for stream crossing/beach front fun times.

Behind the bars were two Revelate Mountain Feedbags and a CRKT Achi Compact knife, stealthily affixed with some 550 cord and some packing foam. 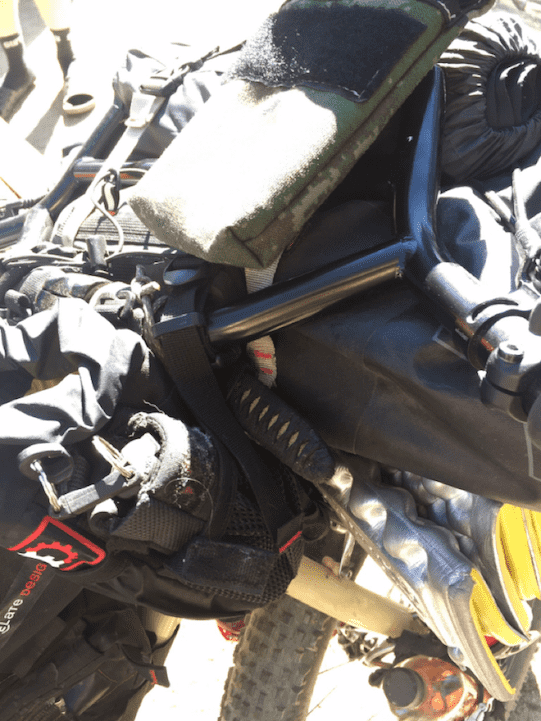 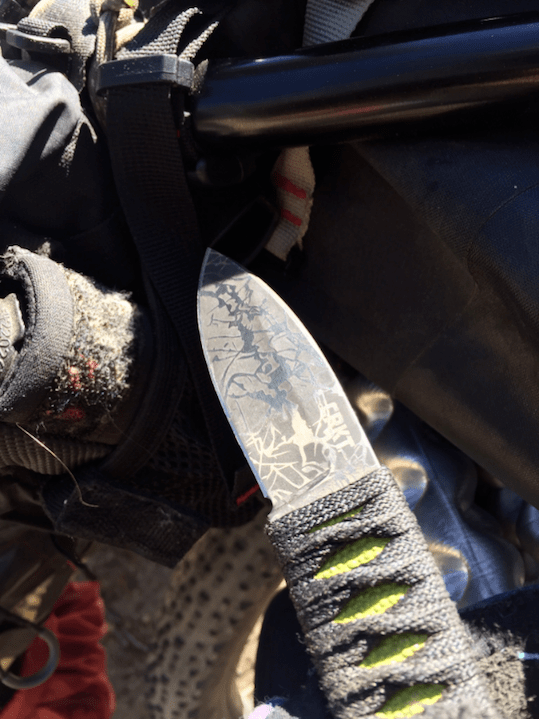 On the fork, I mounted two bottle cages, and two King Many Thing Cages. In the water bottle cages-one water bottle, and one MSR fuel bottle. On the Many Thing cages, a 1-Liter Nalgene (Cooking water) and one 350 mL bottle of Bulliet Bourbon. On the down tube, I mounted a Salsa Anything Cage, which had my fire kit, as well as some first-aid items. 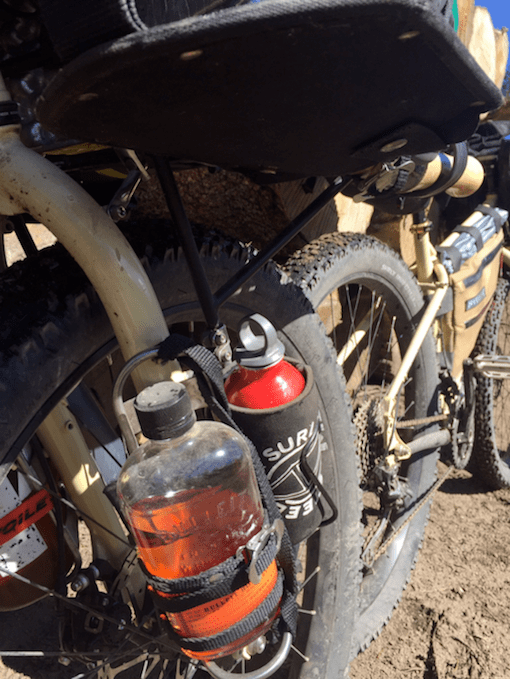 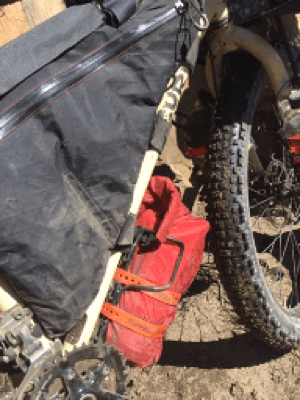 In the Frame bag (Revelate, again) I stored 2 spare tubes, tool kit, lights, and spare nutritionals and Ti spoon. On the top tube, I packed all the nutritionals I’d need for the day in a Revelate Gas Tank Bag. In the rear, I ran the Revelate Visacha, packed with some cool weather gear, and another dry bag with a change of clothes. Mounted to the straps, my Morakniv Bushcraft knife, and of course, the dangle mug. 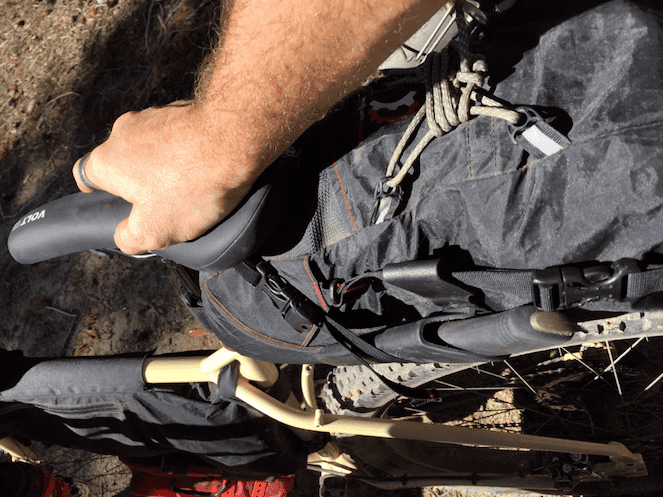 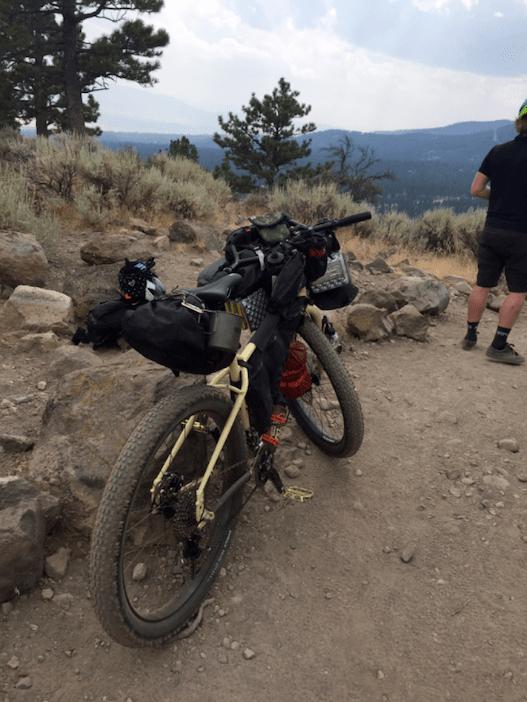 Some of you may think that this load might be a bit much, but let’s remember what the thrust of this excursion was for me- to see what this gem of a bike can do with gear attached. The ride didn’t go as expected, and well, if you’ve ever bike toured- this is pretty par for the course. Regardless of where we were at, fire roads, twisting single track, dangerous overgrown/blownout/Sketchville decents and highway riding- this bike tackled all well fully loaded.

After spending the last few years utilizing various front loading racks on my touring and commuting rigs, it’s no surprise to see Surly diversify their bikes and products designed for front loaded touring/commuting. I’m not saying it has anything to do with me, only that my thoughts are that, Front loaded touring is optimal for two reasons, and it makes complete sense. The traction gained from having weight centered right above the axel completely outweighs the feeling of pulling your packed weight from behind on a rear rack. The added front wheel traction helps the bike to handle like a bike. Simple. Weight on the front wheel allows the rear to play freely. And if you’re like me, I like to steer with my hips when I ride, which can be lost with rear weight.

In conclusion, this bike on this trip? Amazing. There were some really good days, some really bad days, but overall it was a positive experience. Sometimes we put ourselves in a place where we maybe shouldn’t be. Sometimes we second guess our past decisions that put us in those places. The difference here was in trusting in the now, and trusting in our gear. Putting in one last push to get to a safe area to camp for the night was sometimes all we could do. We had the right tool for the job. And it paid dividends. We kept our heads cool in dire situations, and utilized what we had to get home safe. The new Surly ECR takes the platform of an already affective off-road touring machine, and tweaks it just a bit to add a bit more versatility and usefulness. I never once questioned my rig, only my ability to push it to its limits. This bike garnered respect everywhere we went, from hang loose signs out the windows of vehicles with California plates while climbing the hills around Emerald Bay, to educating a homeless woman at a gas station in Reno, this bike does what it does best.

“Are you two just out riding bikes in the woods with your stuff?”