Well, look at this. The blog is ticking along like a '76 Buick with a fresh bottle of HEET poured in. It's nice to see. If I remember correctly, and I seldom do, I wrote my first entry on this thing using a rotary-dialed phone cradle modem. The Vic 20 that I used had to have coal shoveled in about every 15 minutes and there were Cheryl Tiegs and Burt Reynolds posters all over the office. Man, that was good stuff back then.

Now, sitting here on the ass end of 2012, I'm waxing nostalgic for the old days and feeling a bit aged. I've been doing this stuff for almost 10 years now, though I still feel pretty lucky to do what I do. Back when I became Surly Employee Number Four there were a lot more Wednesday Night Ride prototype testing sessions, we could fit our Interbike booth on Dave's bike, and I had all of our part numbers memorized. We wondered what a blog was and questioned why we'd need one. Who cares what we have to say after all? It felt - and still feels - presumptuous to think that the things we have to say might be even slightly interesting. Yet, there you are all snug in your task chair with your Mac Book Pro astride its Ikea Vittsjo laptop table. Your macchiato steams ever so gently in its demitasse.

Shit, where was I?

A couple of weeks ago I hit a skunk. I was riding home from a trail committee meeting after (I swear) only two beers and the little varmit ran out of a dark yard and right under my front wheel. My heavy ass went airborne and I speared the pavement with my dome. (I'm no helmet evangelist, but I was wearing one and it did keep my skull in one piece) I've made a pretty good living falling off of my bike, but man, this one hurt. I was pretty sure that I'd made the kind of noise when I hit where people would be opening their front doors wondering how many dump trucks had hit how many bull elephants.

I rolled onto my side in time to see my mammalian speed bump friend waddling south in a limpy hurry. No, I didn't get sprayed. I did, however, sit on the curb for about 15 minutes feeling sorry for myself and making deep grunty labored gasping noises. I felt like shit.

Do you remember when you used to fall down and then you'd get up and everything was cool? I never really grasped what a superpower that was.

In the morning I couldn't raise my left arm, so I assumed that my number on the broken collar bone list had finally come up. Turns out, I'm just a big wuss and the x-rays showed nada. At least I got to wear a tiny ER gown and be pushed around in a wheelchair. That was pretty sweet.

All of the oldness that's manifesting itself in me, however, is being tempered ever so slightly by the fact that I've got a kid now and I can live vicariously through his wipe outs and get-back-ups. He's pretty good at both. So good, in fact, that this year Santa thought enough of the nipper to answer his Christmas letter request for a "sparkly orange bike." Lots of people will see this as spoilng him, but you should have seen the list and what he didn't get.

Since I know people who can do stuff, I worked a couple of angles and wrote a couple of checks to make this happen: 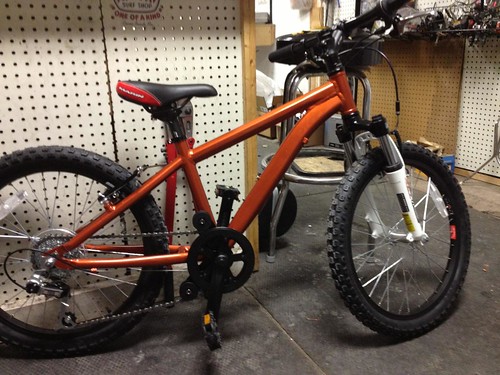 I know, custom paint on a kid's bike is stupid. But, just tonight we went down to Deke's bike shop to show off his new rig and he ended up doing figure eights on the sales floor while we had a couple of cold ones. It was sort of perfect. 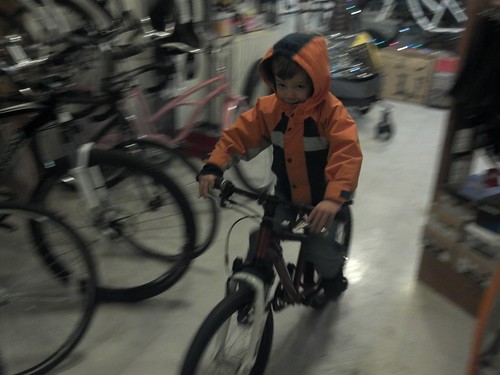 Sure, my joints are filled with sand and I make Abe Vigoda noises when I pee, but I get to watch junior make mistakes and come up with some pretty impressive victories over gravity, bad decisions, and a certain genetic clumsiness. That doesn't make getting out of bed in the morning physically any easier, but it does make it more interesting.