I Remember My First Dirt Fest… (well, sort of)

A few weeks back I had the utmost privilege of attending Dirt Bag’s annual gathering of the dirtbags known as Dirt Fest along with Fritz, KLEM, and honorary Surly Goof Trooper Brad Quartuccio. Now, I’ve been a little jealous of my Surly comrades in the past after hearing tales of Dirt Fests past, so naturally, I jumped at the opportunity to finally attend one.

And I was not disappointed. To the best of my recollection, here’s how it all went down.

Kate and I flew into Pittsburgh where our chariot (Brad) awaited. Immediately after leaving the city to drive the 3ish hours to the Fest, we made our first pit stop which was, let’s face it, the real reason for this trip. I’m of course speaking of SHEETZ. If you’ve ever spent any time in western PA or West Virginia you know the culinary institution of which I speak. If you’ve never been, well, you need to get right and experience some MTO stat. It’ll change the way you look at gas station cuisine forever. 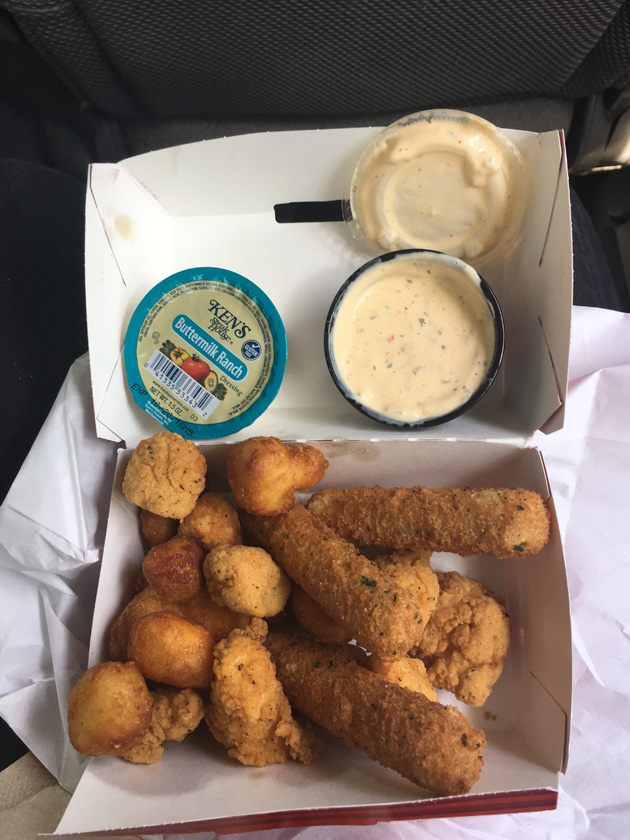 After dining (read: gorging), we hit the road again until our second pit stop to buy enough groceries to feed a football team before a big game or, in our case, four jaded bike industry veterans who intended on eating their feelings all weekend. After carefully filling every nook and cranny of Brad’s truck with copious amounts of tubed meats, bubbly water, sauerkraut, and various other edibles (not that kind), it was onto Dollar General for other necessities. It was here that I scored an $8 pair of knock-off Crocs or Croc-offs if you will (kudos to my wife for coining that genius term), which I inevitably spent the entire remainder of the weekend wearing. En route back to the truck we were bathed in the glory that only a shining set of Truck Nutz in their native habitat can bestow. 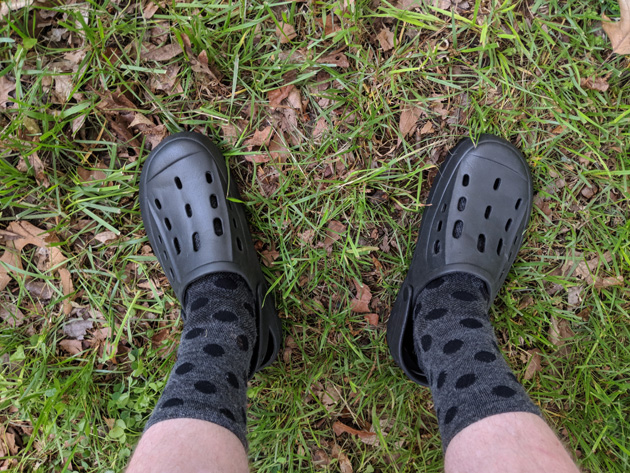 It's called fashion, look it up. 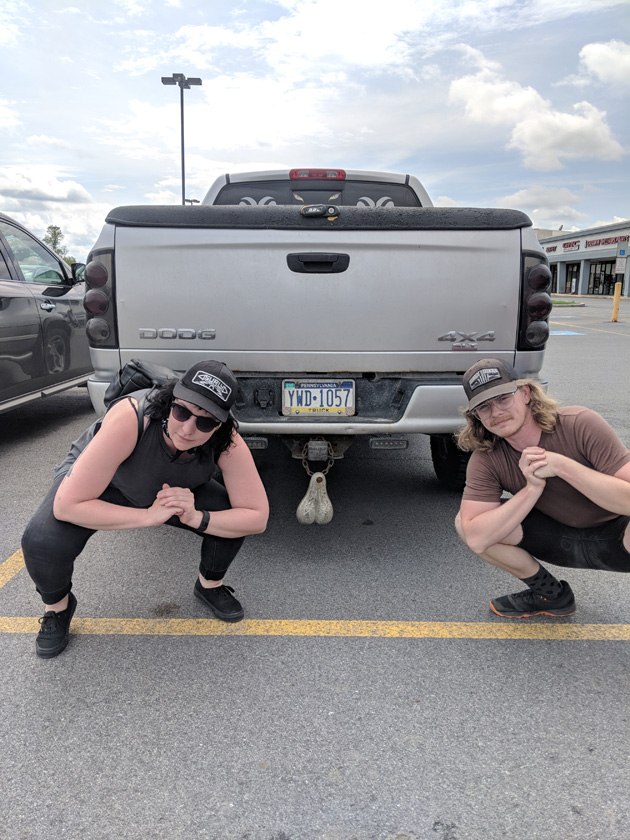 Eventually, we made it to Dirt Fest. We beat Aaron there so all we could really do was stand around and wait for him to get there seeing as he was driving out with all the stuff. He also had the beer which was unfortunate for us. But, we made do with some bubble waters until he rolled up in Steel Force One aka TaliasVan aka our demo van. Upon his arrival, we made quick work setting up our demo space and the teepee which would serve as our sleeping quarters for the weekend. While we set up, Brad got to work on dinner. He whipped a damn fine chili in his Dutch oven which would’ve sufficed on its own. Brad played a wild card though and blew my fucking mind in the process. When the chili was about 15–20 minutes from being done, he threw in some cornbread batter on top and baked that shit right on top of the chili. The result was definitely something I will be attempting in the future. 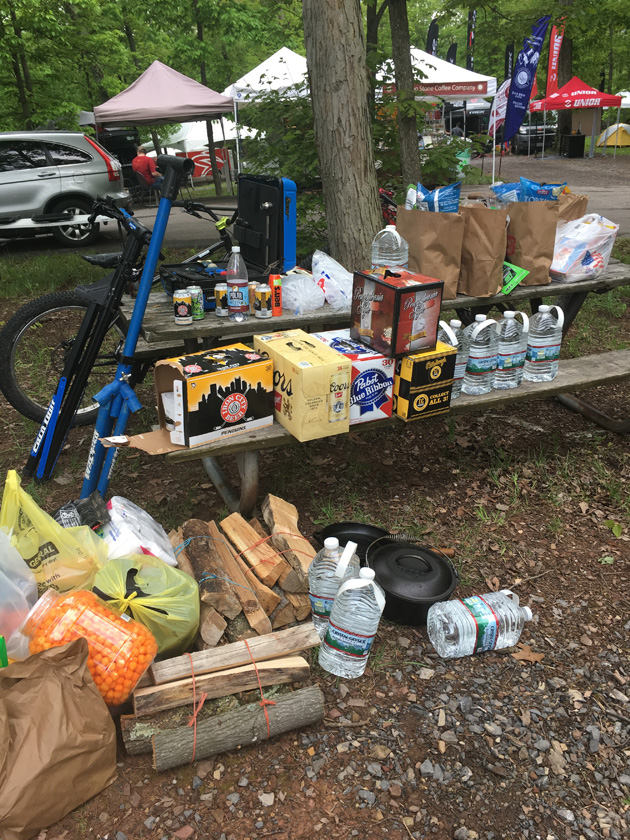 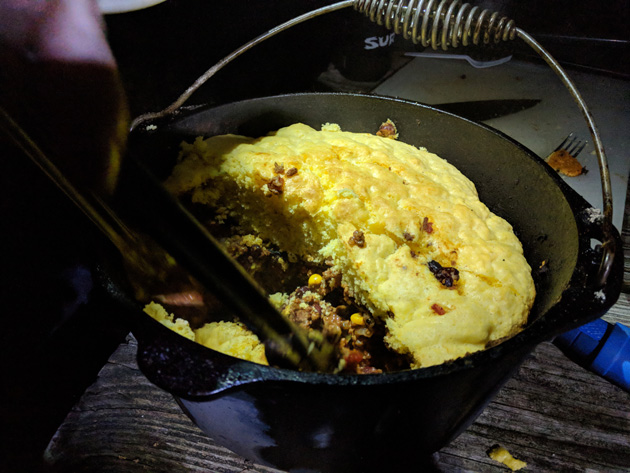 As we were setting up, we noticed a whole lotta mud caking bikes and riders alike as people were coming off the trails. The area had received a decent amount of rain in the days leading up to the event and the forecast wasn’t looking good for the weekend. 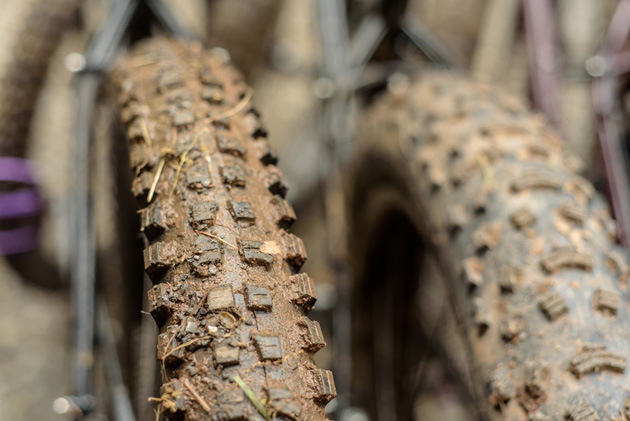 A preview of what was to come

We woke on Friday to rain and more mud. After sending the first round of bikes out, we proceeded to kill time the rest of the day filming unbiased and hard-hitting reviews of a new brand of bubbly water we found. It made for a VERY productive day if you ask me. After a dinner of kielbasa and sauerkraut, Aaron and I decided to head down the hill to the official Dirt Fest party and see what we could get into. We certainly got into some shit. I think. All’s I know is I ate some of the best pizza of my life and then got a ride back up the hill in a large blue bus. The rest of the details are a bit hazy. There was also, unfortunately, a reggae band. I think. And it was Maurice’s birthday. I think. 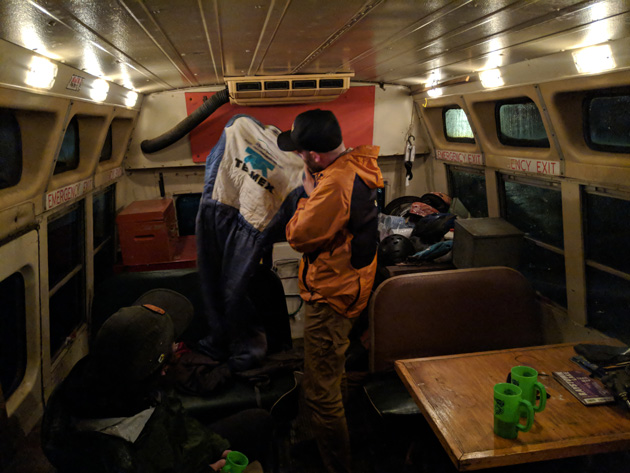 Inside the blue school bus. I think. 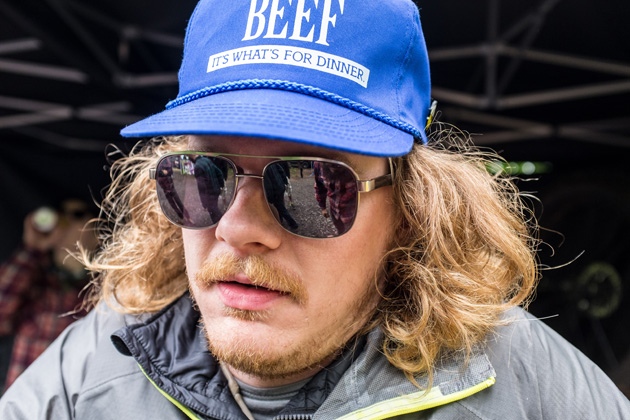 Now seems as good a time as any to talk about the only bit of unpleasantness of the weekend. The only spot we were able to set up our floorless teepee was a large patch of grass behind our demo space. Now, I don’t know if you’ve ever taken the time to count the number of spiders in an 18 x 18-foot patch of grass, but I can tell you from experience that you will lose count at a shitload. This was not something we’d thought about when setting up camp and we got lucky on the first night. That second night, our luck took a divebomb straight to hell. I woke in the middle of the night to, I shit you not, a fucking wolf spider just lounging around right on my goddamn face. As if that’s not terrifying enough, one of its shitbird little buddies had the gall to cozy up inside MY FUCKING MOUTH. Needless to say, I was not stoked about either of these developments. 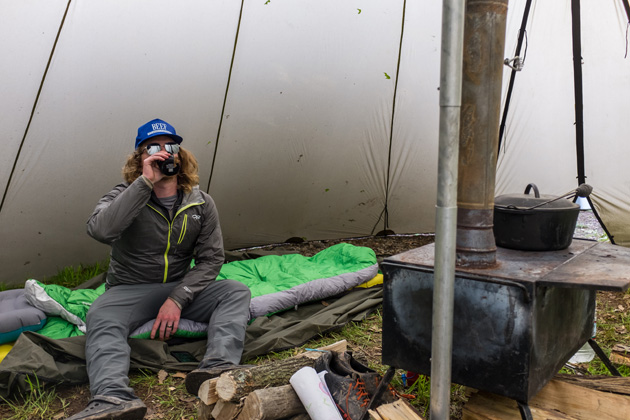 There's only one way to get the taste of spider out.* 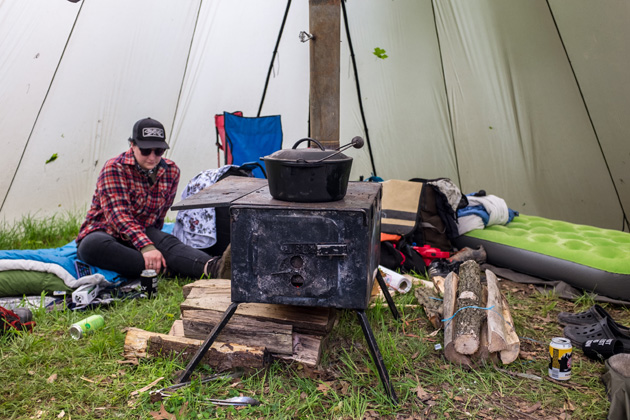 When we woke on Saturday morning, we swapped spider-filled horror stories. It turns out I wasn’t the only one being tormented by the little freaks. There was the distinct sound of rain hitting the teepee, so we knew it was going to be another muddy one. We composed ourselves and faced the day. Due to the rain, we were one of only three brands that were sending demos out that day. Because of this, our fleet was out pretty much the entire day, so we once again set out creating product reviews for the internet. We also took advantage of this lull to finally crack open our economy-sized barrel of cheese balls. As with any event that we show our faces at, our cup overfloweth with cheese balls at Dirt Fest. 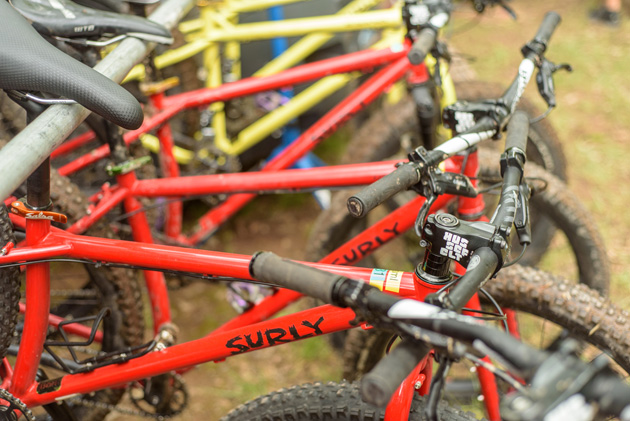 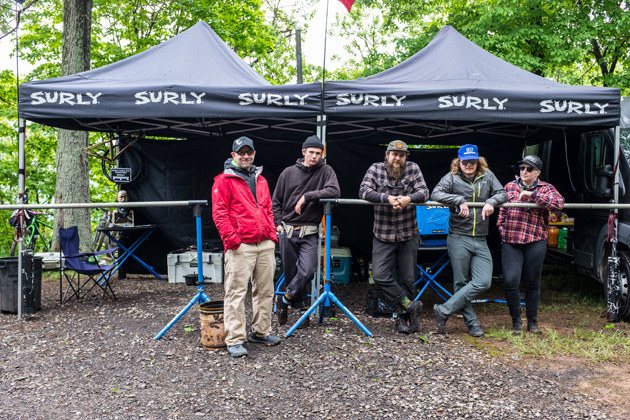 After. Shoutout to our unpaid intern Linus (second from left). He showed up on Saturday to help us out because he's interested in the thrilling life of a demo driver. Despite Aaron's best efforts to scare him off, Linus returned on Sunday. Expect great things from Linus in the future.*

Round about 4pm on Saturday, people began assembling for the start of our group ride which was set to take off at 4:19 sharp. Aaron geared up and led everyone out along with the assistance our local splinter cell of Dereck and Erik. These two, along with another gent by the name of Jody, have a huge role in making our annual Dirt Fest ride a success every year. They plan the route, supply the beer, and, this year, served up some venison and French fries that Dereck had pilfered from his grandparents’ freezer. With Dereck on the grill, we raffled off a small Instigator frame and set of Rabbit Holes to one lucky Dirty Fester. 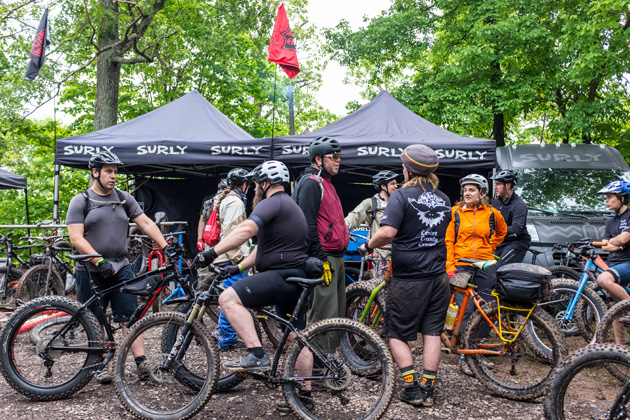 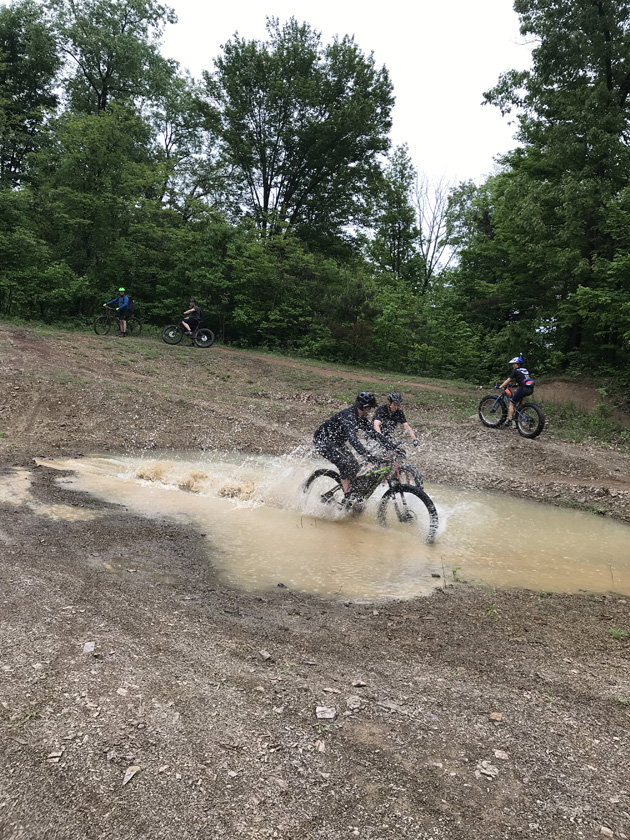 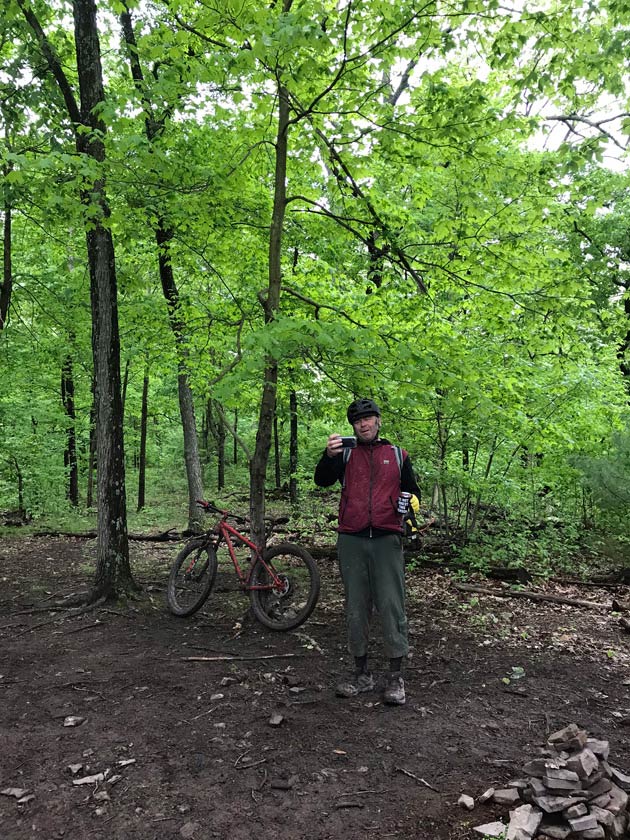 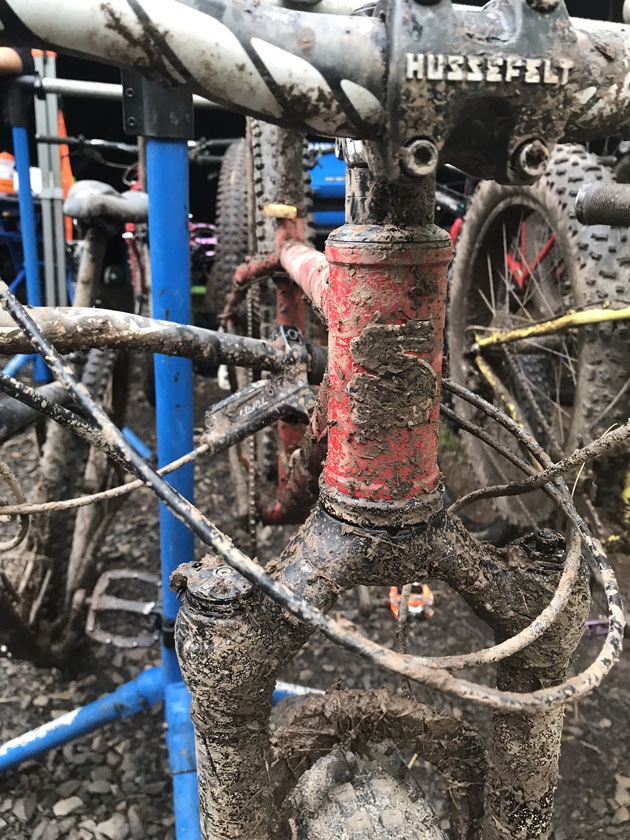 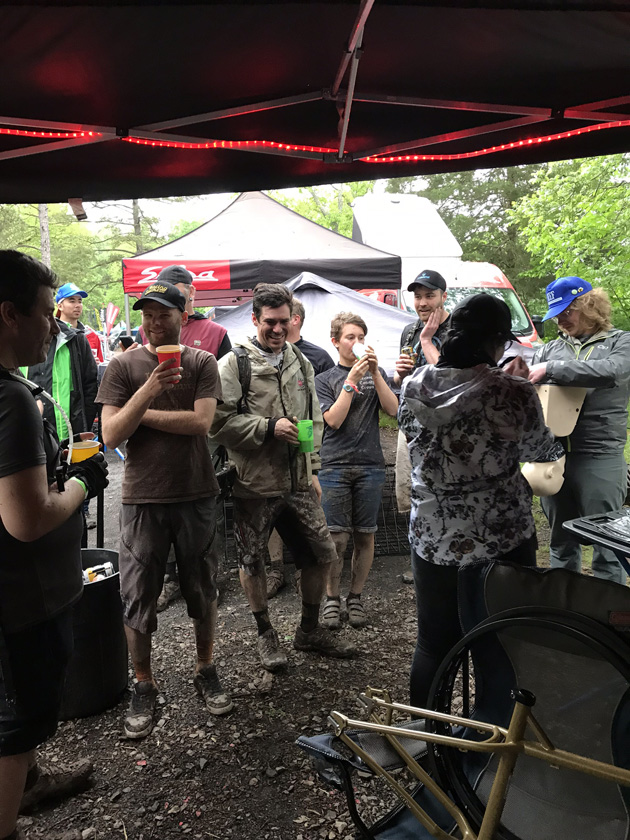 "Man, it sure would be cool to win that Instigator." -Green Cup Guy 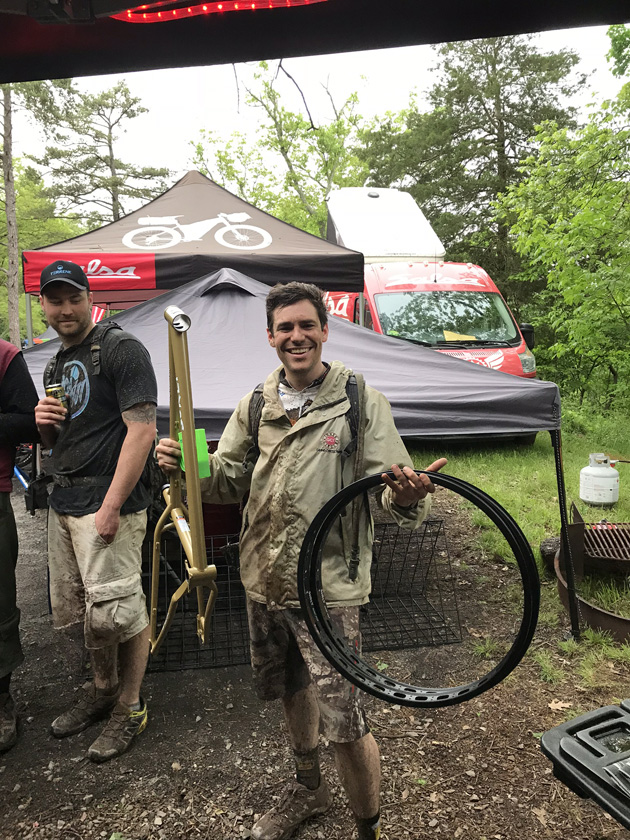 As the post-ride party waned a bit, it was soon just Brad, Kate, Aaron and myself remaining around the trash can fire that Brad had lovingly built. But that didn’t stop shit from getting weird. Aaron flipped the switch to turn on the newest addition to Steel Force One: blood red rope lights. With trippy-ass lighting in place, it seemed like a good time to summon the Energy Master TaliasVan. After about twenty minutes of the greatest hits list, Aaron had enough and took off down the hill fueled by anger and a determination to outrun the Energy Master. This was obviously a foolish quest. For you can never outrun the Energy Master. He will always find you. At one point in all this weirdness, Kate tried summoning him the only way we know how: by calling his landline number that’s listed on his website. Alas, when someone answered, Kate hung up, not quite ready to face the Master yet. 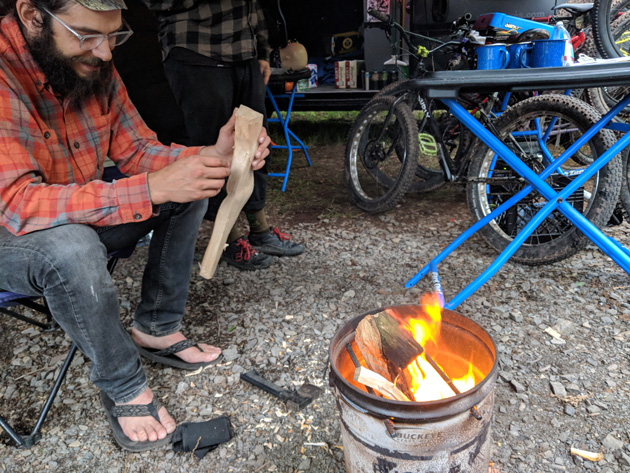 Trash fires are the best fires. 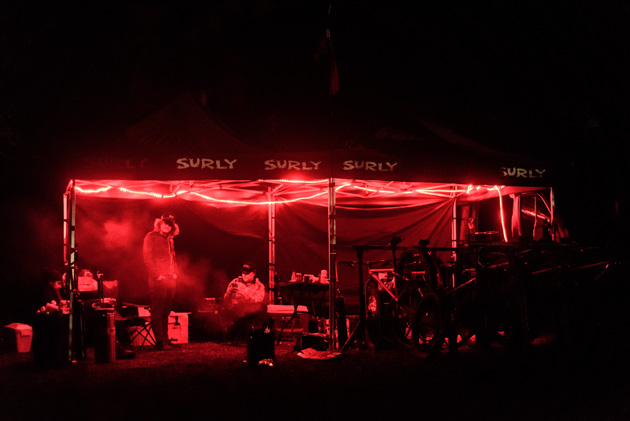 Proper mood lighting is key for summoning the Energy Master.*

Sunday was yet again rainy and muddy, though it did clear up towards the end of the day. Our bikes were all out for most of the day again but seeing as this was the end of the event, we made use of the time and packed up what we could. All the bikes came back at a reasonable time and we loaded them up. Well, almost all of them. We had one esteemed gentleman who had a bike out well past the respectable demo time, then tried to get out of bringing it to the bike wash, then had his girlfriend stand in line for said bike wash while he walked around the expo area. Take note if you’re ever planning on coming out to a demo event in your life, this is what’s known in the industry as a “dick move” and no brand appreciates it. Don’t be that guy. And if you are that guy, well, I really hope you have an aggressive fart that doesn’t quite go as planned real soon.

On the way back to Pittsburgh, we, of course, stopped at SHEETZ again.

Now, here are some additional photos that didn’t necessarily fit the agenda of this blog post but are still nice. 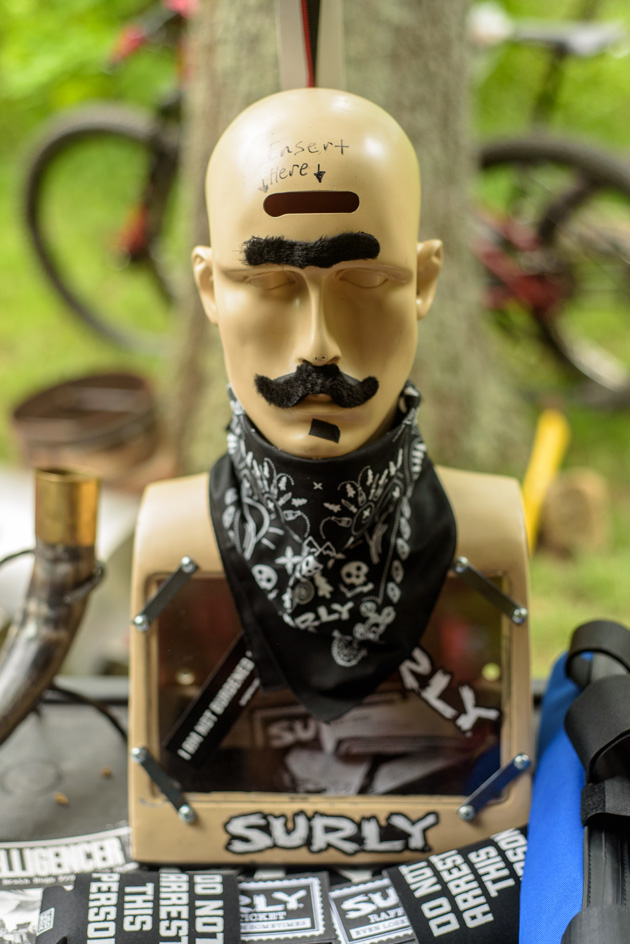 The fifth member of our Dirt Fest crew* 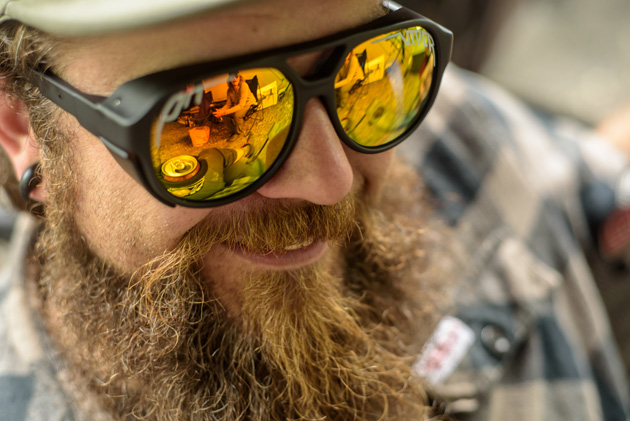 Shoutout to Pit Viper for being the best neighbors anyone could ask for. Well, anyone who isn't an asshole. Here's Aaron sporting his Exciters.* 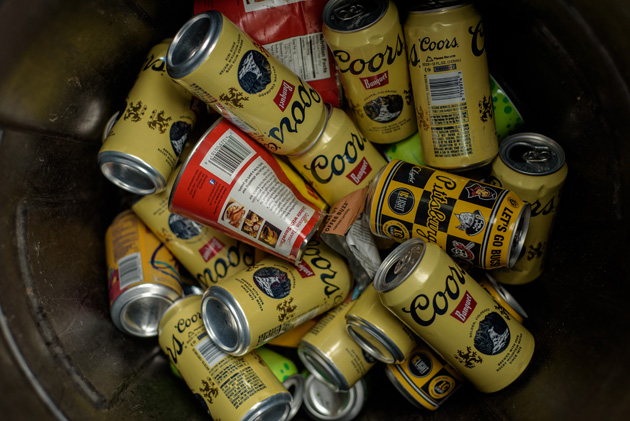 Teamwork. Not shown is the massive amount of shitty PA beer including something simply called "Pennsylvania Style" which is far from a style icon if you ask me.* 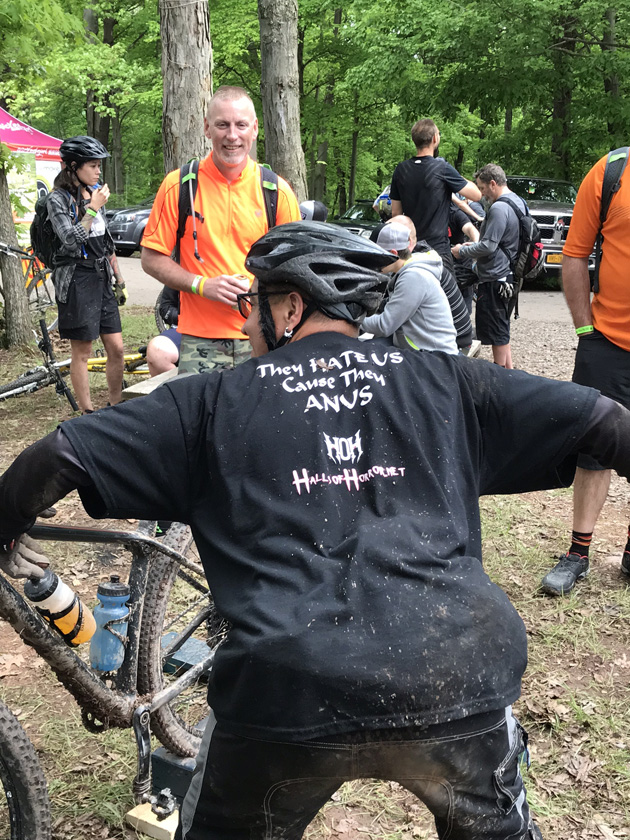 The man, the myth, the anus. This Fester, dubbed by us "Anus Man", won the manual competition that whiskey booth next to us was holding.

Well, that's all. Huge thanks to Brad Quartuccio for helping out and taking photos for us. The images marked with an (*) are his. You can also tell their his because they weren't shot with a phone. If reading all this made you think "aw shucks, I wish I could go to Dirt Fest," fear not. The crew at Dirt Rag added a second Fest in West Virginia. It takes place July 13–15 and we'll once again be in attendance. You can find the deets here.

I had every intention of ending this blog with a song of Yob’s new record but then just as I was about to hit go, Carl Skildum unleashed the first Inexorum track unto the world. So here that is.

You should still definitely listen to the new Yob record because Yob is love.