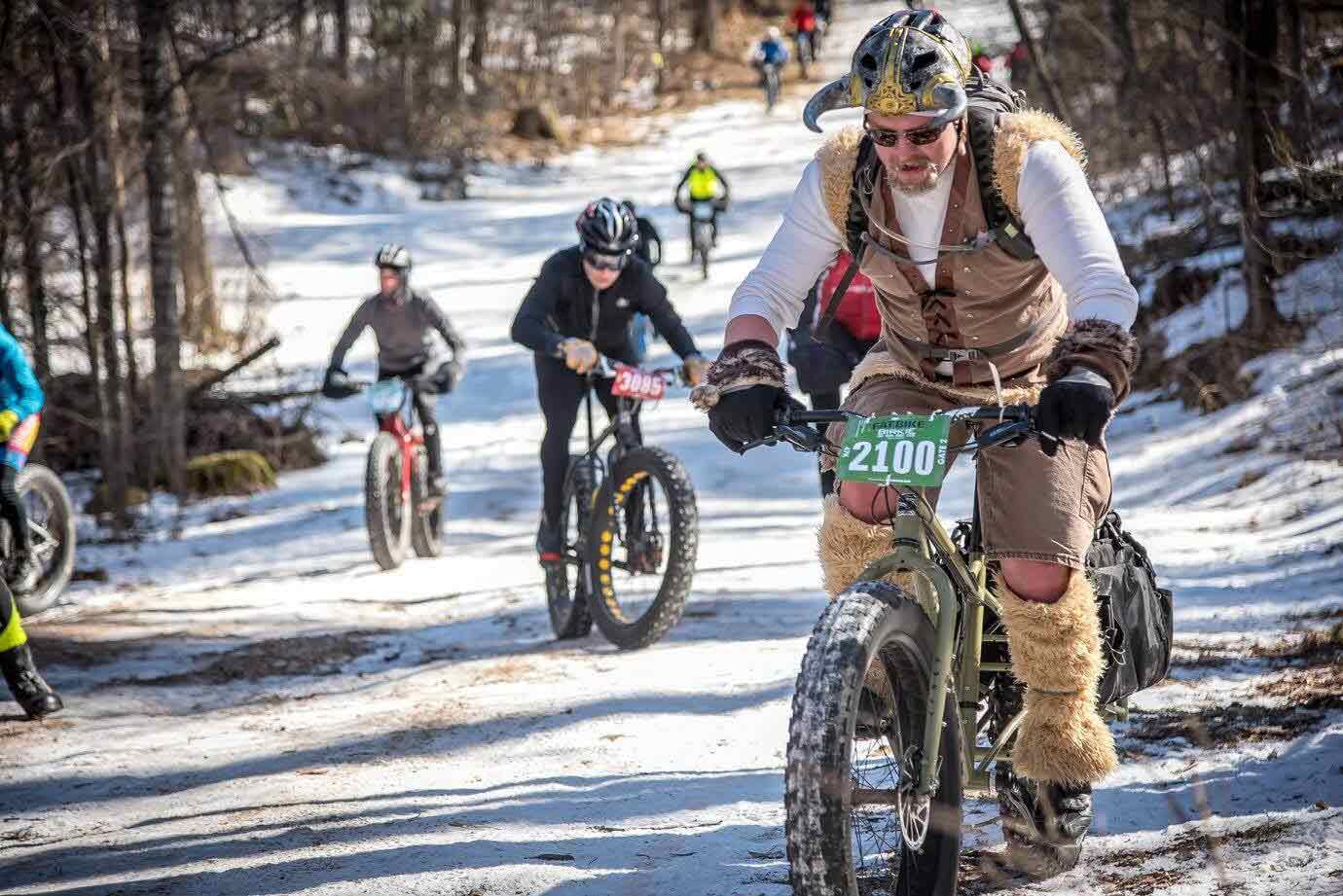 Location: A bit of a nomad that generally sticks to the Driftless Region of Eastern Iowa and Wisconsin

Who do you think you are anyway?
I have a remote desk job working with credit union software implementation and business analysis that you would not find interesting. I'm an advocate for your Local Bike Shop. I'm a volunteer trail builder and community organizer. I was a volunteer firefighter and hope to be again someday. I'm a card-carrying member of the Bike Black Ribbon Society. I've got a couple of Single Speed USA belt buckles, occasionally on the hosting committee and always down to travel wherever that annual party ends up. I've participated in every Fat Bike Birkie since it started in 2013. I'm a fan of the 2-Speed Kickback/Coaster Brake. My favorite riding buddies are my two brindle mountain curs, Vivian and Holi that are affectionately referred to as "the tiger pups." I am occasionally fortunate to be called upon to test and review products for www.fat-bike.com. 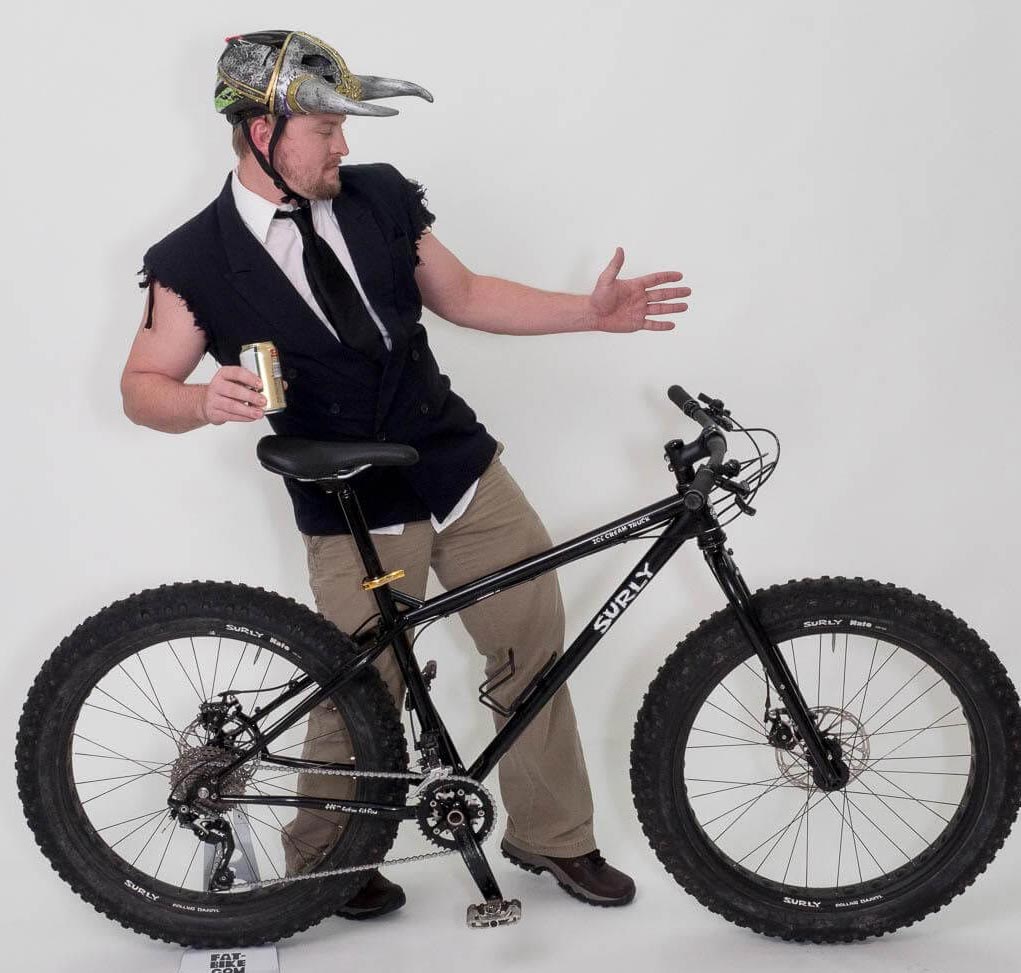 How’d you get into bikes?
I went to college in Decorah, IA and one of my college wrestling coaches was really into mountain biking. Decorah has an amazing trail system in and around the city limits and I love the outdoors. While I was in college, the bike became a dual-purpose workout and means of getting outside and enjoying nature. I was always involved in sports and became very fond of being a part of a team at a young age. I enjoyed the comradery that is naturally associated with a group of people who have a common goal. I had wrestling since I was like four so once college wrestling was over for me, I needed to find that family feeling. I found it in the Decorah mountain bike community.

It's not always about riding for me these days. I absolutely love working in the dirt and building quality, sustainable trails. Power tools are cool for sure, but there is something special about riding a bike into the woods with a shovel, a hodag, a handsaw, and an axe, and clearing a path that I will enjoy with my friends. Riding a trail that I've built or helped to build is something that I've found helps bridge the gap of accomplishment that I don't always physically get in my day job. 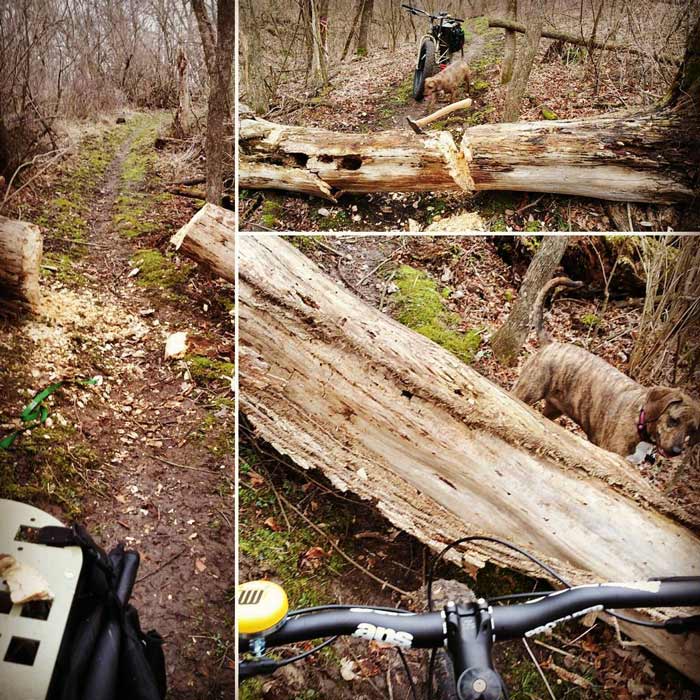 Tell us about your Surly Bike(s).
I learned early on that Surly bikes make the most sense for the way I ride and the type of riding I do. I need bikes that are extremely durable and I'm not willing to pay a lot more money for a bike that weighs a little less. And because Surly makes high-quality steel bikes at reasonable prices, I can afford to stock my garage with a few different options.

Gen 1 Krampus - This is my single-speed rigid ripper. 2-to-1 gear ratio. This is my go-to for any trail ride, anywhere. It's been to every Single Speed USA since 2012. In 2018 I took it down to the Whole Enchilada in Moab. I'll probably throw a suspension fork on if I ride that again. I qualify for the Clydesdale class at 200+ lbs and I've found that the 29+ makes for a much more comfortable ride and the wider rims give me a little more confidence than a skinny-tire bike would. 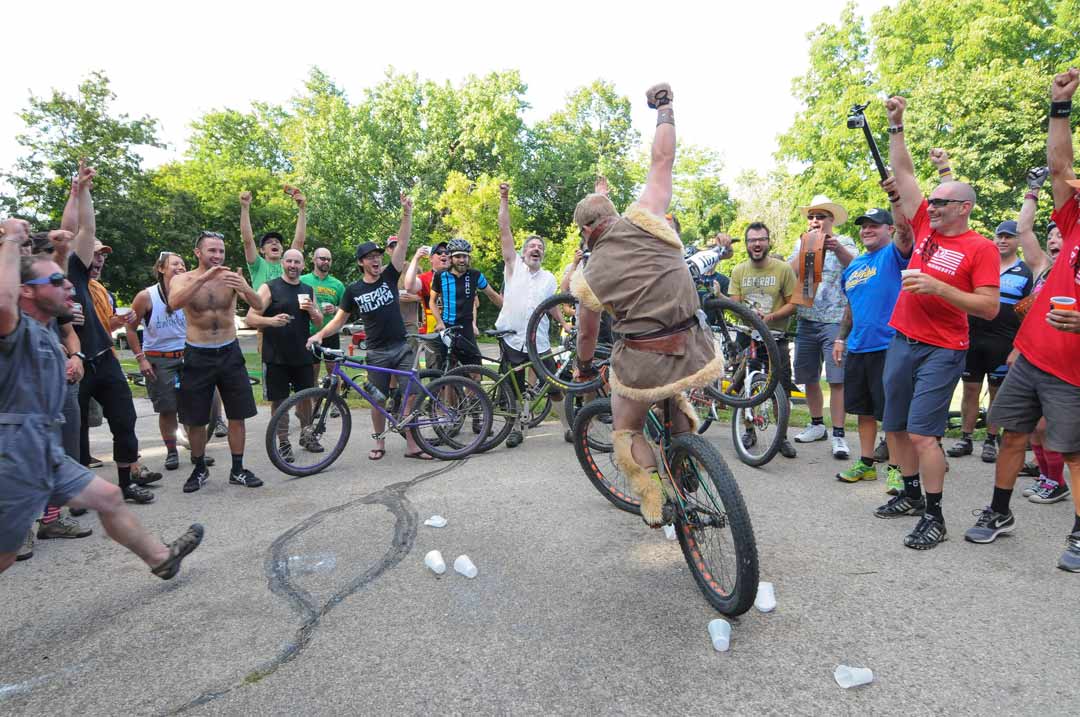 Gen 1 Moonlander - This is my tractor. I called my LBS as soon as I heard about a bike that handles a 5-inch tire and had it ordered. I've thought about shedding the gears many times, but it makes sense to keep them on for the utility and range to pull my puppy wagon or roll through the backcountry off-trail. This is my go-to bike when I have to do work like build some remote singletrack, survey storm damage, traverse some deep and ungroomed snow, or maybe get around on a wet trail system. 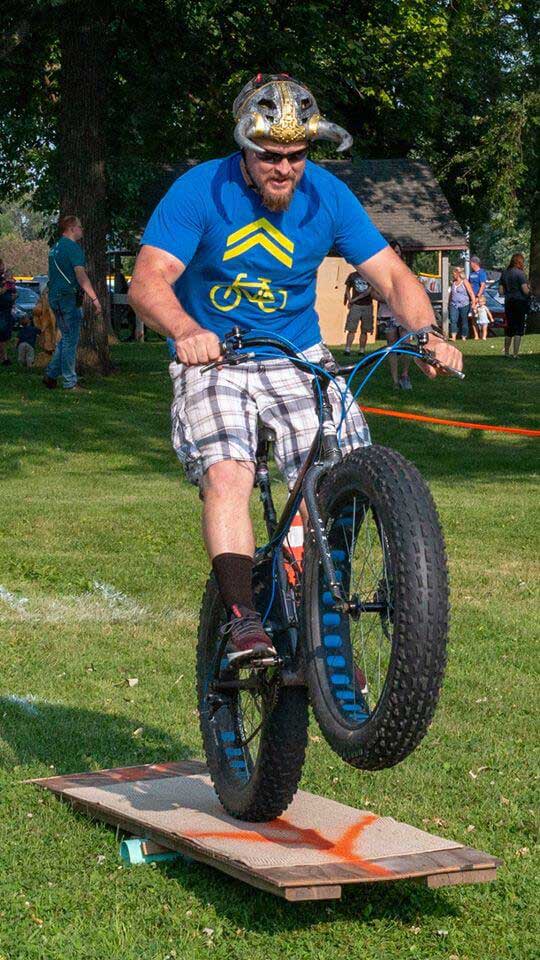 Big Fat Dummy - Haul All The Things! When I bought my original Big Dummy, I expected to use it a couple times a month to run to the grocery store or occasionally haul beer to the fire pit.  It quickly became my go-to whip for anything that was not a trail ride. Maybe because it was always readily available as it didn't hang on the wall like my other bikes, but probably because it is amazingly versatile and I ain't no weight wienie. As a big fan of big wheels, I always thought it would just add to the awesomeness if it had fat tires. Big Fat Dummy = Dream Come True.  In the same way that fat people are hard to kidnap, I presume it would be very hard to steal this bike from outside the local pub. I might have raced it a time or two just for fun and also in part because when other racers see it, they might be reminded that the experience is more important than the prizes and podiums for the shortest time on the trail. As an added bonus, it's basically an armored tank in a derby, well worth the full purchase price for that reason alone. 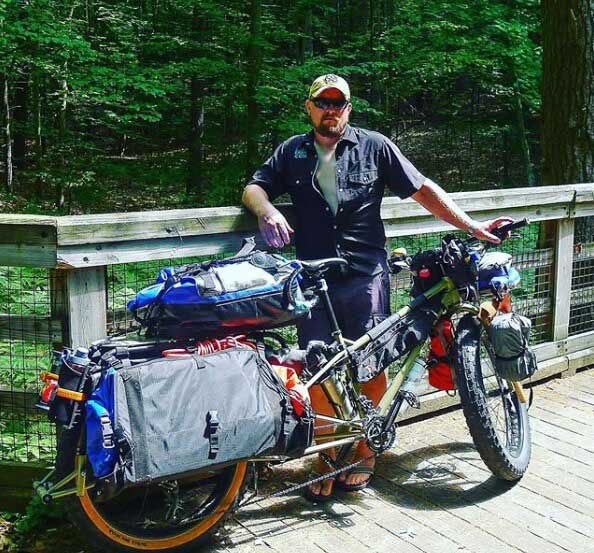 Pugsley - I honestly don't understand it, but this is my favorite bike of all time. Cable brakes, single-speed hubs front and rear with an 18 and 16 respectively and a 36-tooth crank gear. This is the hammer that I use for any trail ride, social ride, bar hop, etc. where a derby just might break out. It's great for bucket ball or a ghost-ride competition and gets dirty looks in a bike polo match. I don't treat it as nice as I could and it doesn't care at all. I busted my first Pugs (Grandpa's Jamas) in an ill-advised firewood jump at Gnomefest and the available replacement frame color at the time was white. The white Rolling Darryl rims were available then as well and I somehow came across a set of white On-One tires, so I got as many white parts as I could to build it up. I have absolutely used the benefit of the offset front fork when it saved my bacon in the Chequomegon 100 one year. I dropped my chain no less than 11 times in the first 10 miles of the race and found I had a bent tooth on the 18 freewheel. I'd like to coin a saying right now that really only applies to the Surly Pugsley; "I STOPPED, SWAPPED and ROLLED" the next 90 miles to the finish by throwing my front wheel in the rear with the 16 tooth freewheel. It was a little taller gear than I would have liked, but at least I didn't have to push my bike back to the start. It's the most fun and low-maintenance bike that I own. 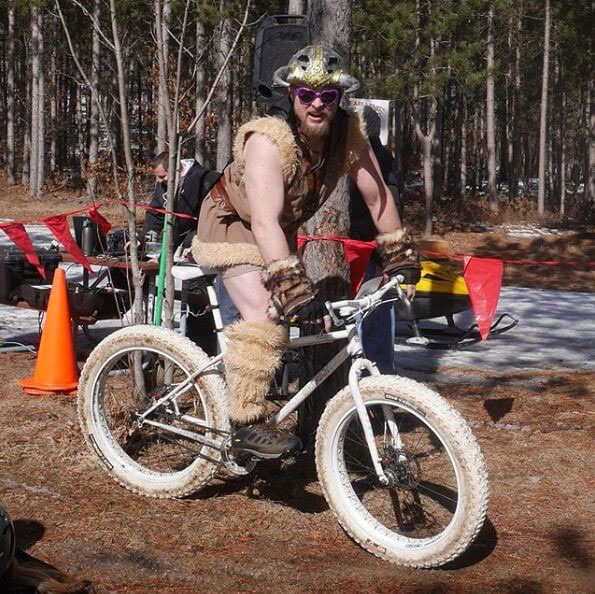 Favorite bike-related memory.
Such a tough job to pick just one. I'd probably have to say when I found out my dog likes to ride on the back of my Big Dummy. I built a puppy platform so she could ride back there and she absolutely loves it. We did The Gravel Metric bike race together. I also set it up to haul my mtn bike in tow so we could ride about 5 miles to the local mtn bike trails, do a trail dog ride, and then pedal home. Still working on the double-barrel doggy hauler which will probably be fitted to the Big Fat Dummy this Spring. 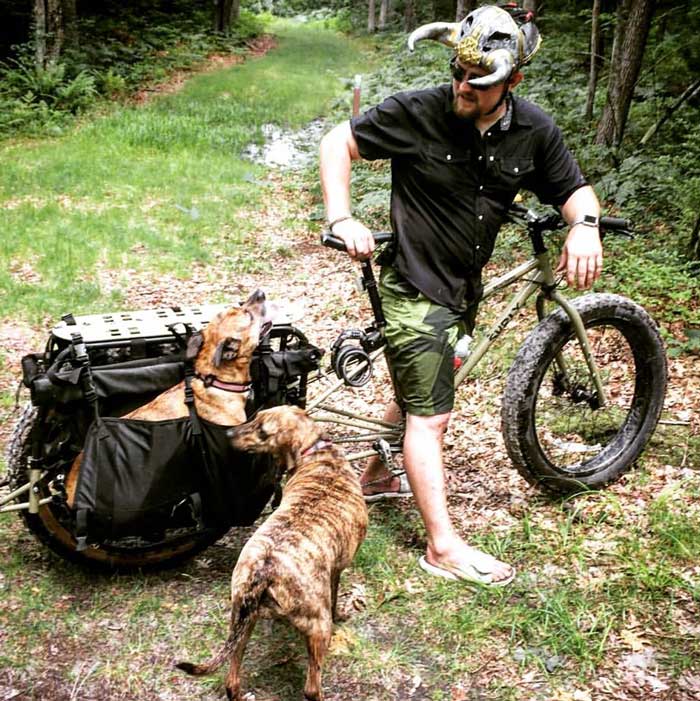 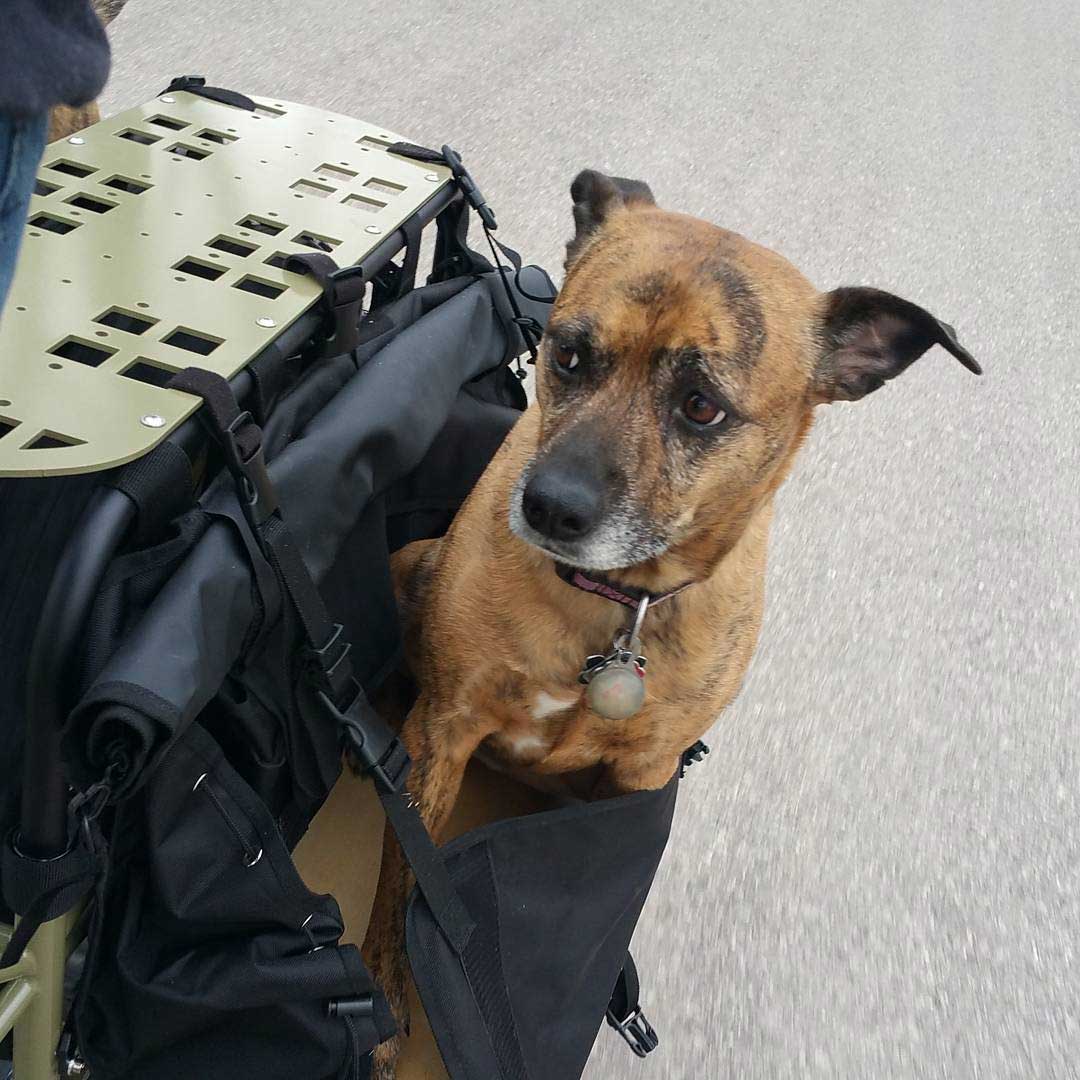 If you could ride anywhere in the world, where would it be?
You know, I've ridden all over the USA and it's hard for me to pick anything over the Wisconsin Northwoods. Colorado is cool, Brevard/Pisgah is great, and Arkansas is a lot of fun, too… but I really enjoy riding in the snow over anything else. So I'd say good ol' Wisco or wherever the next Single Speed USA goes. Sometimes it's less about where the trail is and more about who you share the trail with. Ripping singletrack is fine by yourself but it's way cooler with 200 of your rowdiest friends (and beers).

Check out the Dose of Fat podcast along with the other podcasts hosted by Gomez, Sven Hammer, Adam Blake, and others. I did a series called "The Burning Bike" podcast on Single Speed USA - Austin TX, if you're into that sort of thing.