Humanoids of Surly: The Price Brothers

Two brothers who grew up around bikes and fell into the obsession at an early age… leading to a healthy sibling rivalry that has not yet determined a winner. 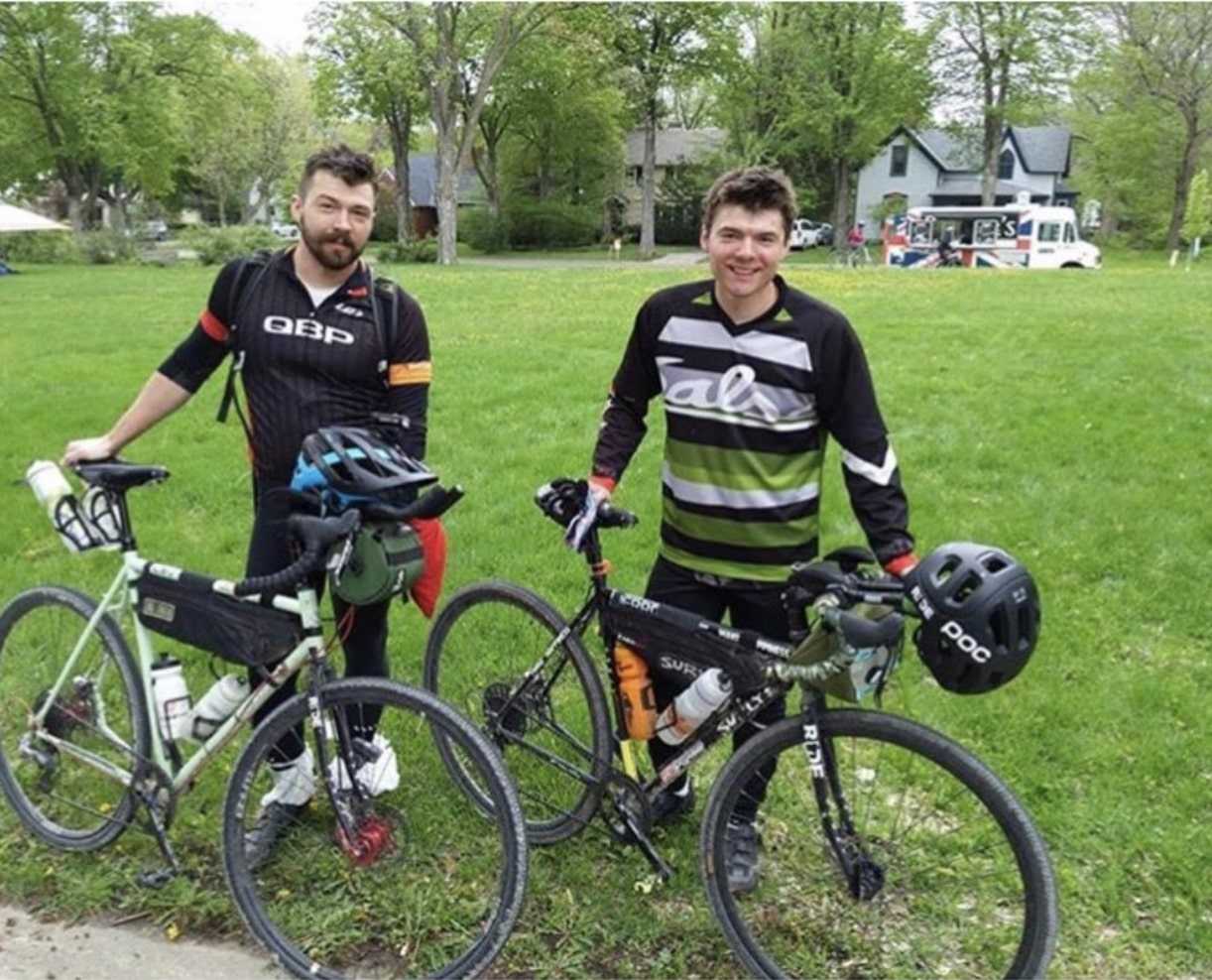 Alex: I’m an inventory analyst with a burning desire to be outdoors and the older brother of the two of us.  We’ll both say we’re faster than the other, just know that I wouldn’t lie to you.  This year I’ve been challenging myself to put more miles on my bike than my car.  So far, I’m up to 7,000 miles on the bike and about 6,000 on the car.  Yes, I kept track… I’m an analyst, remember? Nothing better than some numbers and a few spreadsheets. 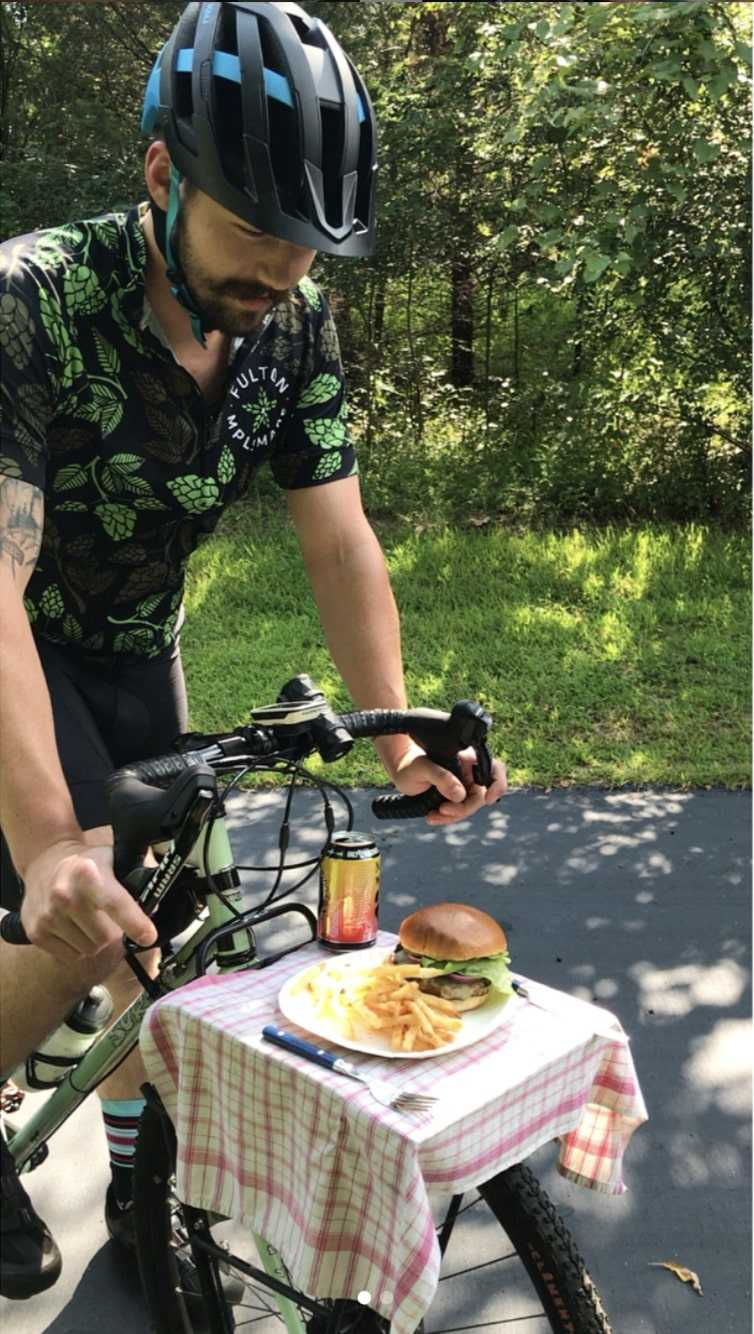 Commuting to work is one of the greatest habits I consistently stick to.  It makes it so easy to get a fun bike ride in while still providing some sort of utility in my day.  Some days I ride the Straggler with my pannier on the rear rack then set off for a long roundabout journey home.  Other days I ride my mountain bike with a backpack and venture out to find single track after work. It’s always good to sprinkle in some variety on the commute.

When I’m not in the saddle, I’m usually in the garage bringing life to the obscure curiosities that pop up in my brain.  Two recent creations were a ski-trike for the end-of-season pond skim at the local ski hill and a retro-direct drive bike I built for scooting around town.  I’m also one of those Minnesotans who actually loves the cold.  In the winter, I’m typically out enjoying the snow whether it be fat bikes, snowboards or snowshoes. 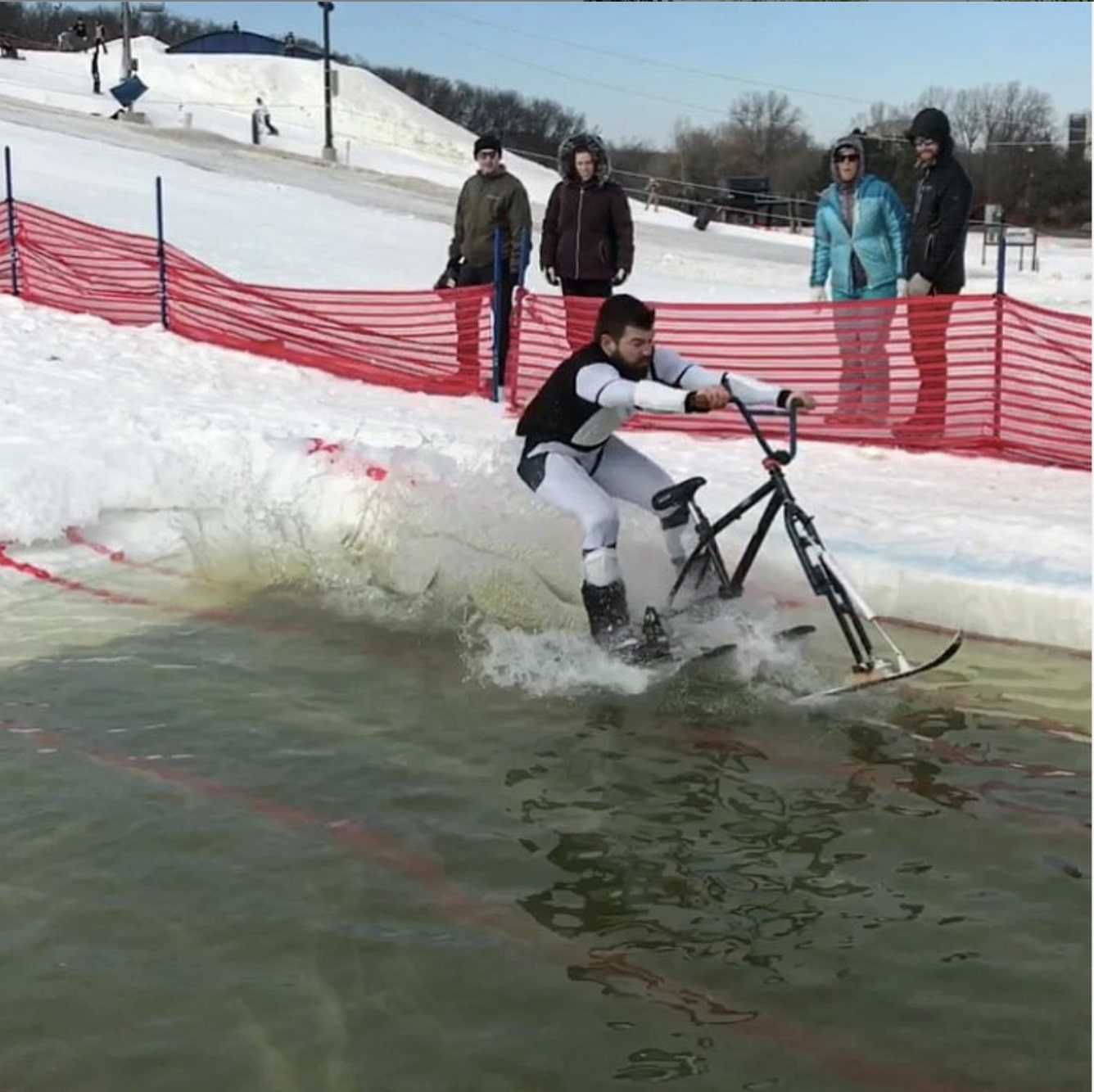 Ian: I’m an almost broke college student who pays rent by driving forklifts all day. If I’m not in class or moving stacks of pallets, I’m most likely riding my Surly somewhere. I love commuting year-round and seeing how long I can go without touching the car keys. My weekend adventures include a morning ride to a local coffee shop where I study, plus the occasional brewery ride in the evening. Since Alex and I both live together, we’ve been feeding off each other to constantly ride our bikes daily. A few years ago, when we started getting into commuting, I remember always asking Alex “are you planning on riding in today?” Now after two years of engraving this lifestyle into our brains, it’s never a question of if we are going to ride but instead it’s “what bike are you going to ride?” 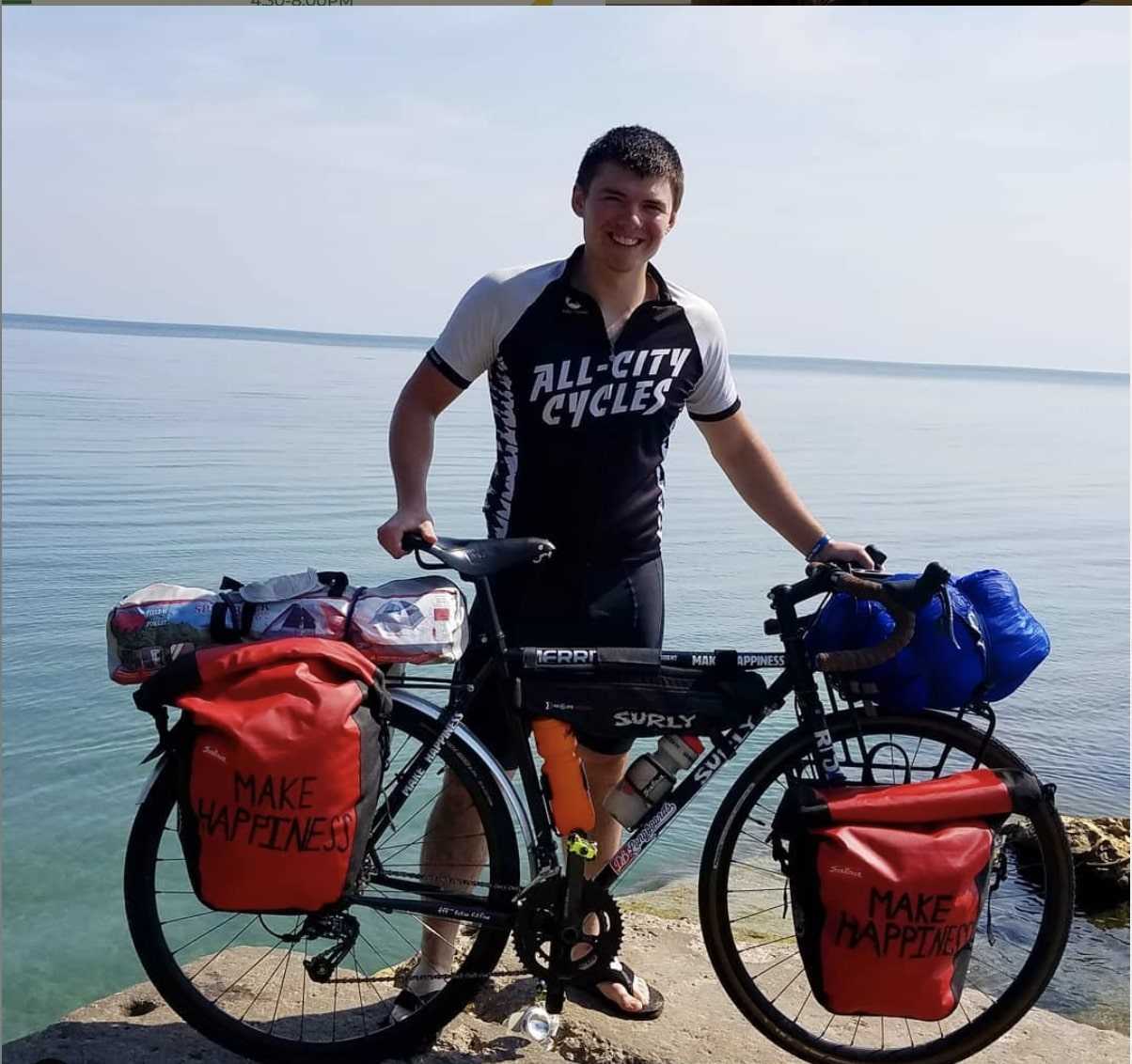 Aside from biking, I really enjoy writing, snowboarding and backyard fires. I love journaling and writing bits of poetry. That’s probably my main outlet outside of riding bikes. Snowboarding is awesome. Plain and simple. Give me a jump line with a few hips and I’ll ride that for hours on end. As for backyard fires, we always have something on the grill and usually a classic game of Hammerschlagen or two.

How’d you both get into bikes?

I blame my father.

Alex: Our dad did a lot of road bike racing and riding, so we were always around bikes at home.  We got into mountain biking at a young age due to the fact that roads were, well, just too damn boring.  The obstacles were the enticing highlight of the trails and drew all the attention every time.  It might not come as a big surprise that this also led to me finding a passion for BMX biking and the creative combination of tricks you can put together.  The BMX biking fueled the mountain biking and vice versa.

Years passed and eventually I set off on my first bike-packing trip with Ian and my dad.  This also included my first century ride on day 1 of the 3-day trek, which was immediately followed by my second and third century on days 2 and 3.  I was amazed how much ground could be covered on the bike as well as what my body was capable of accomplishing.  This was the spark that ignited the fire to go further.

Next thing I know Ian and I are signed up for our first gravel ride, the Alexander380.  This is a 100% free to register gravel ride through southeastern MN with close to 22,000ft of elevation and 390 miles in total.  After this 38-hour excursion, we continued to push boundaries and find out where the true limitations lie.  We challenged ourselves to ride from Minneapolis to Duluth and back in under 24 hours, which is about 330 miles round trip.  We set off at midnight on Friday and rode through an epic sunrise into Duluth Saturday morning.  The return trip proved treacherous while the temperature slowly rose to 98 degrees Fahrenheit and the miles crept by slower and slower.  We ended up making it home in 22.5 hours to see a welcoming sunset drop behind the Minneapolis skyline.

Our passion for biking continues to grow in all different directions, this year’s theme is ultra-endurance.  New levels are reached when you really push your limits of comfort (and push the limits of your gear).

Ian: Read Alex’s response, essentially it’s the same thing. I just wanted to be cool like my big brother and keep up with him. At least until I started beating him at races *laughs*.

Tell us about your Surly Bikes.

Alex: My favorite is always the Straggler.  It’s my swiss-army-bike, the grab-and-go anything tool.  I can hop on this bike and take on whatever the day puts in front of me.  I always rock a half frame bag packed with every tool I could need, enough Surly Junk Straps to bring home “I-can’t-live-without-it” ground scores, and a folding lock so I never have to think twice about whether or not I have one with me.

The bike itself has evolved a lot over the past several years. I’ve fallen in love with the Mint color and will run this frame into the ground before I get a new one.  First thing I did was convert to 1x11 and stick an oval chainring up front. This freed up the front shifter for more thrilling uses, like a warranty-voiding hole in the frame and an internally routed dropper post.  I also thought it would be a fun experiment to race this bike with a suspension fork at the Chequamegon mountain bike race last year – it didn’t fail to put a smile on my face! 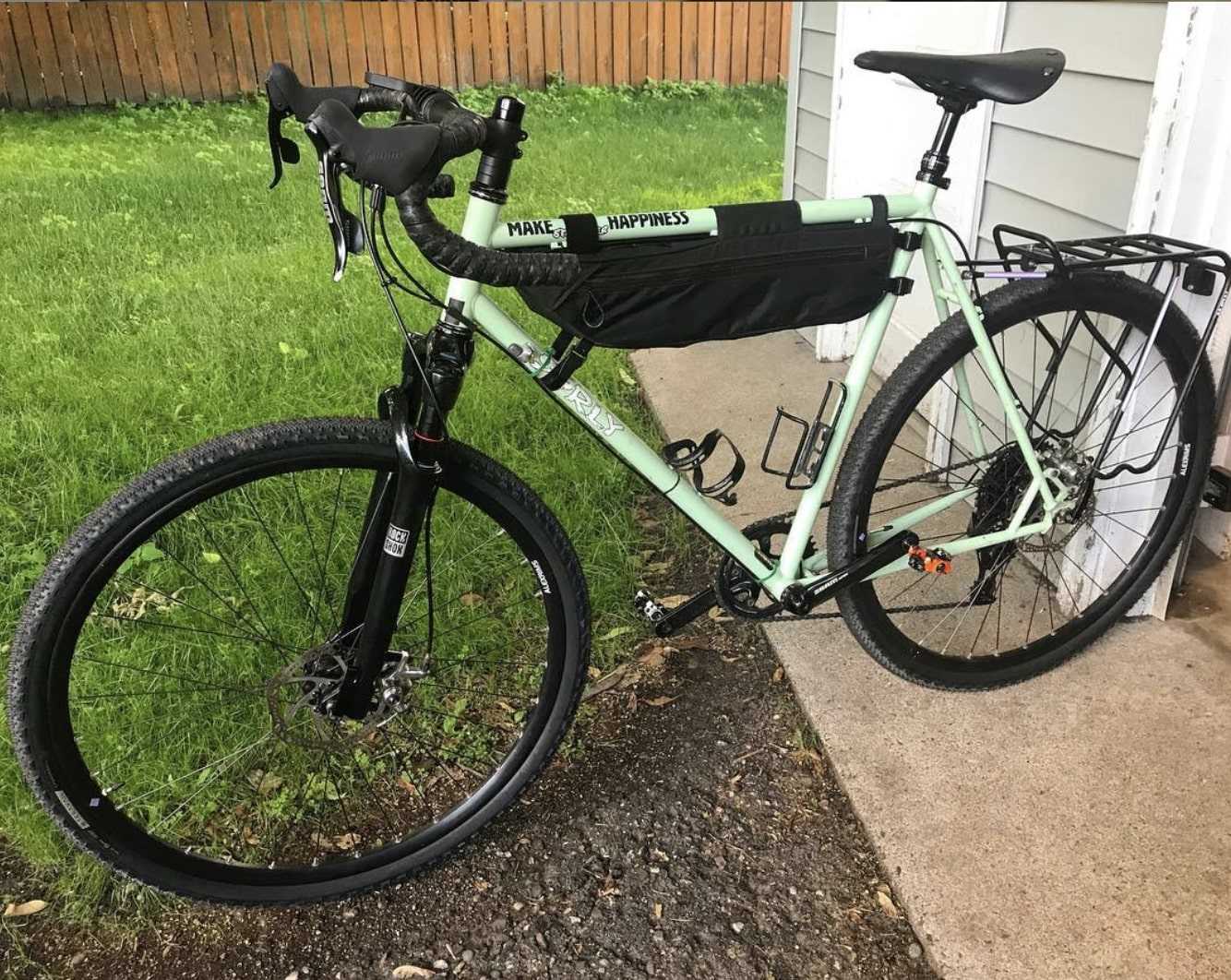 Ian: I have three. A Straggler, Ice Cream Truck, and Karate Monkey. I love them all unconditionally. My Straggler is the commuter, gravel grinder, and ultra-endurance machine. I raced this thing for the DAMN (Day Across Minnesota) which is a gravel event that runs 241 miles from South Dakota to Wisconsin. It was one hell of a ride to say the least.

The Ice Cream Truck is my lifted, big ass 4x4 that carries me through winter. I absolutely love snow and furthermore, I love pedaling in it. Riding in feet of snow during a blizzard is actually really peaceful for me. No noise, no humans, no animals. Just you and the bike. 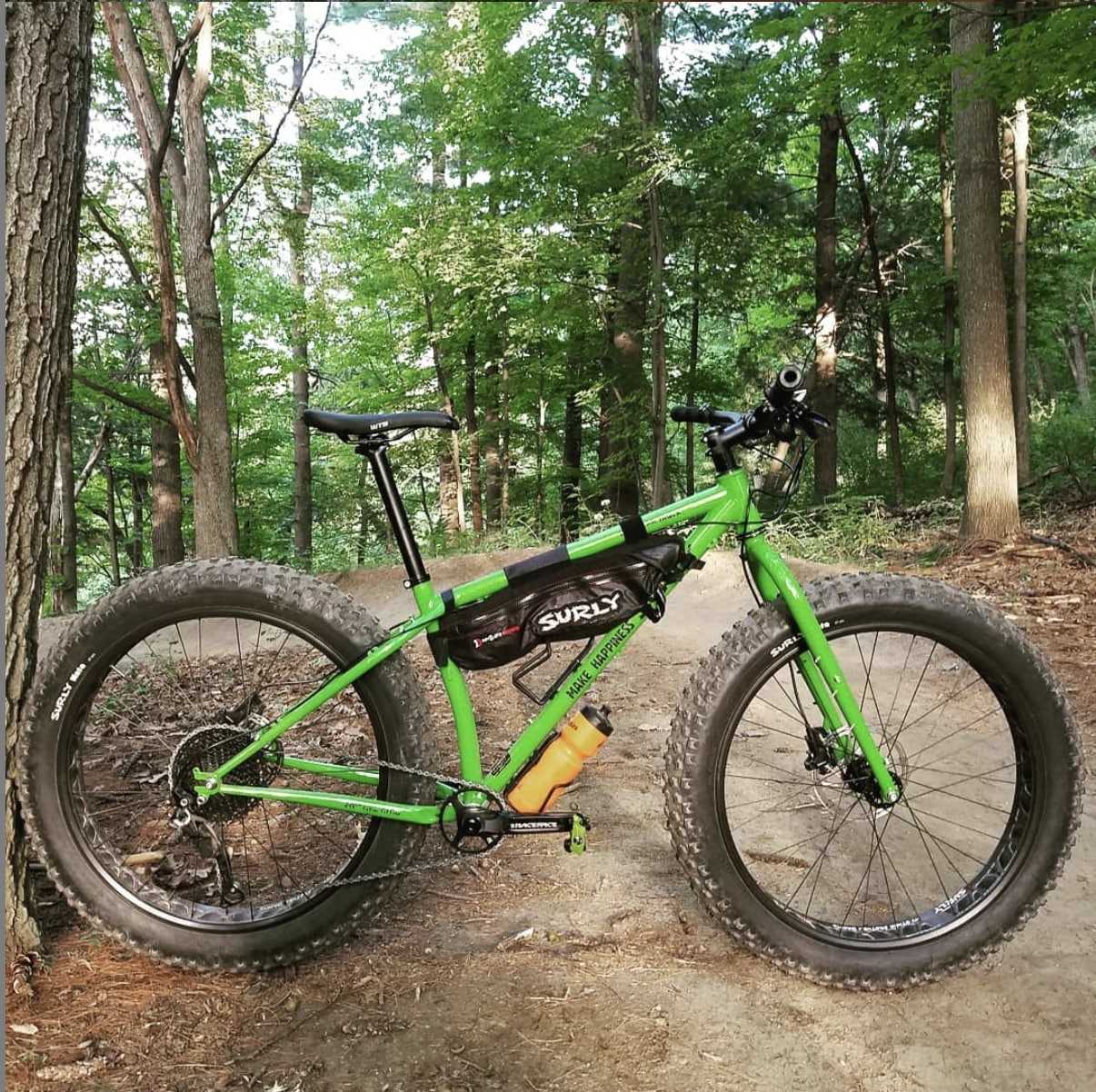 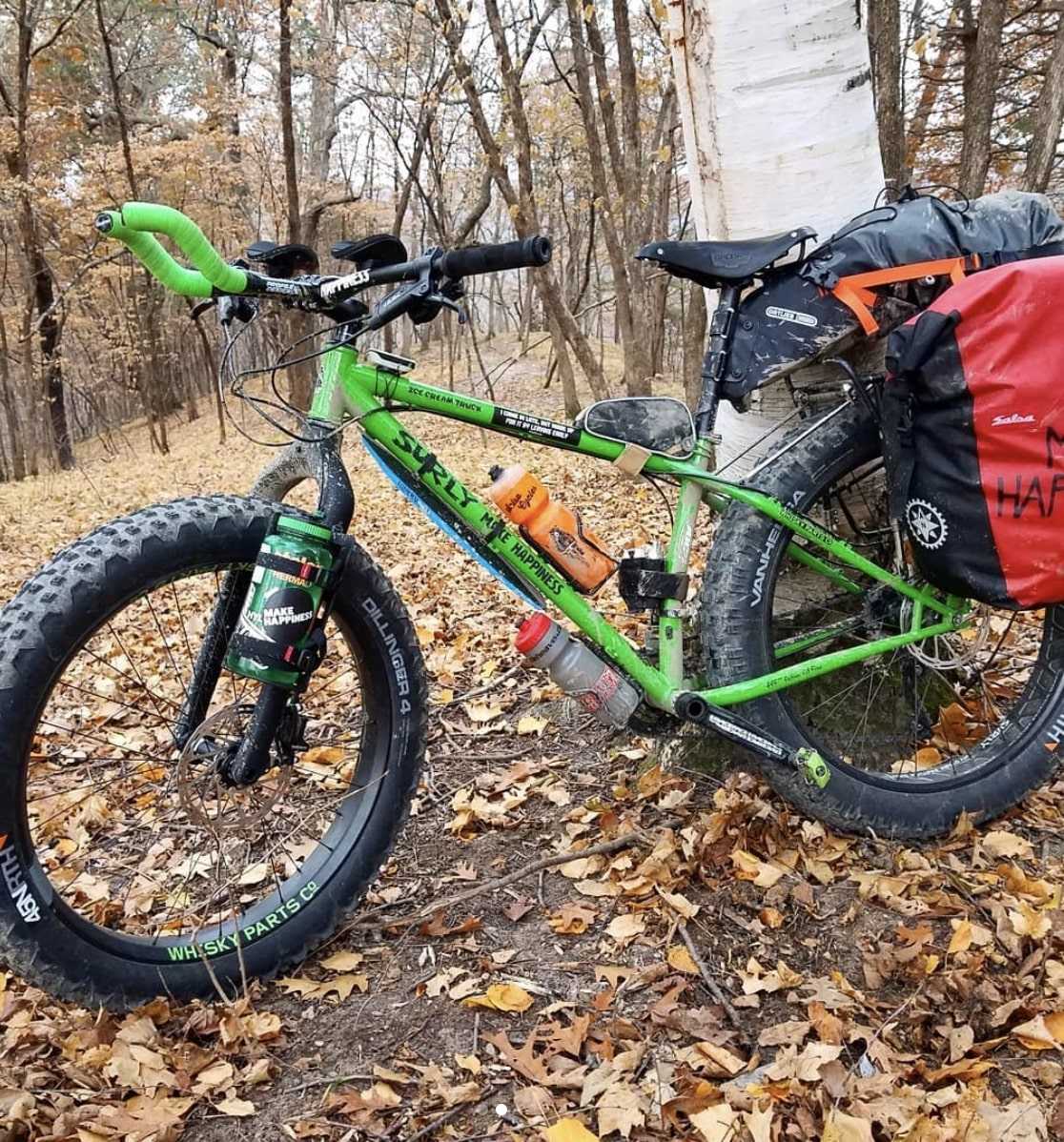 Last but not least, my Karate Monkey is for slashing berms, airing jumps, and racing XC. The fact that I can take my KM on a day trip to Spirit Mountain in Duluth for some jump lines and then compete in the 24-Hour Wausau Mountain bike race in Wisconsin has blown my mind. Surly really nailed the versatility thing on the head. Every bike I own can be used for so many different applications. 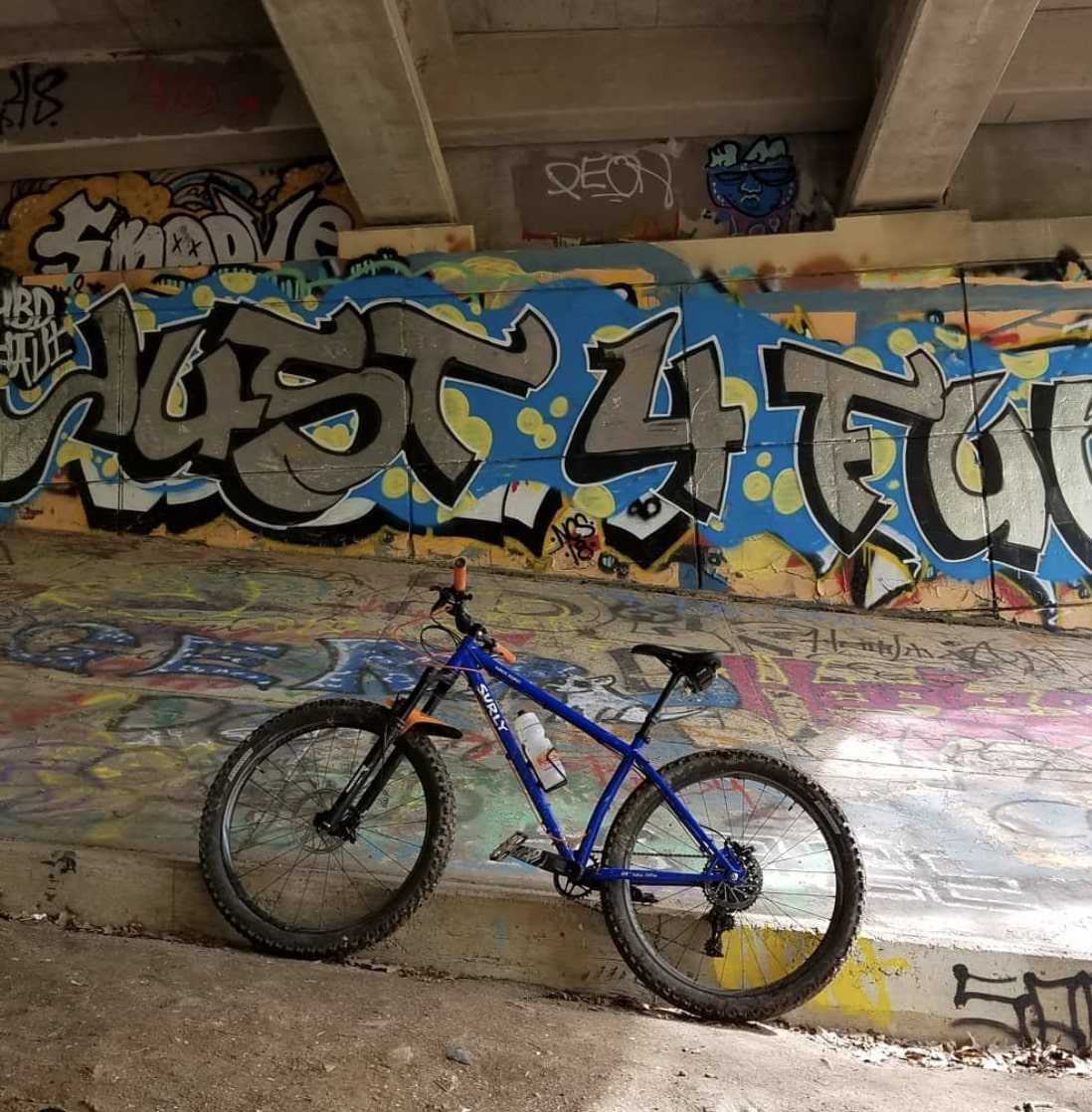 Alex: It isn’t a single memory, but a single event that I get to experience again and again.  This year I’ve come to really enjoy night riding for many reasons, I was immersed in this for the first time during the Alexander380 gravel race.  We left at midnight and biked through 100 miles of gravel until we reached a plateau in a mixture of farm fields and lonesome county roads.  I followed Ian over the crest of the climb to see the wildest array of colors creeping up in the sky as the sun slowly rose.  We biked through the entire day and into the following night, got a couple hours of sleep and continued onward in darkness. The second sunrise lacked the color and excitement the first morning offered.  I didn’t pay any attention to the light reaching over the horizon, my mind was fixated on a single thing: how many miles left to go?  The last 40-mile push to the finish was the hardest and most taxing segment of the entire event.  It was out of sheer want to be done that we pushed onward, determined to close this long self-induced book of suffering.  After reaching the finish, eating food and reflecting on the last two days, I kept retreating to the same appreciation; the fact that we were able to get ourselves so far into the middle of absolutely nowhere entirely on our own power. 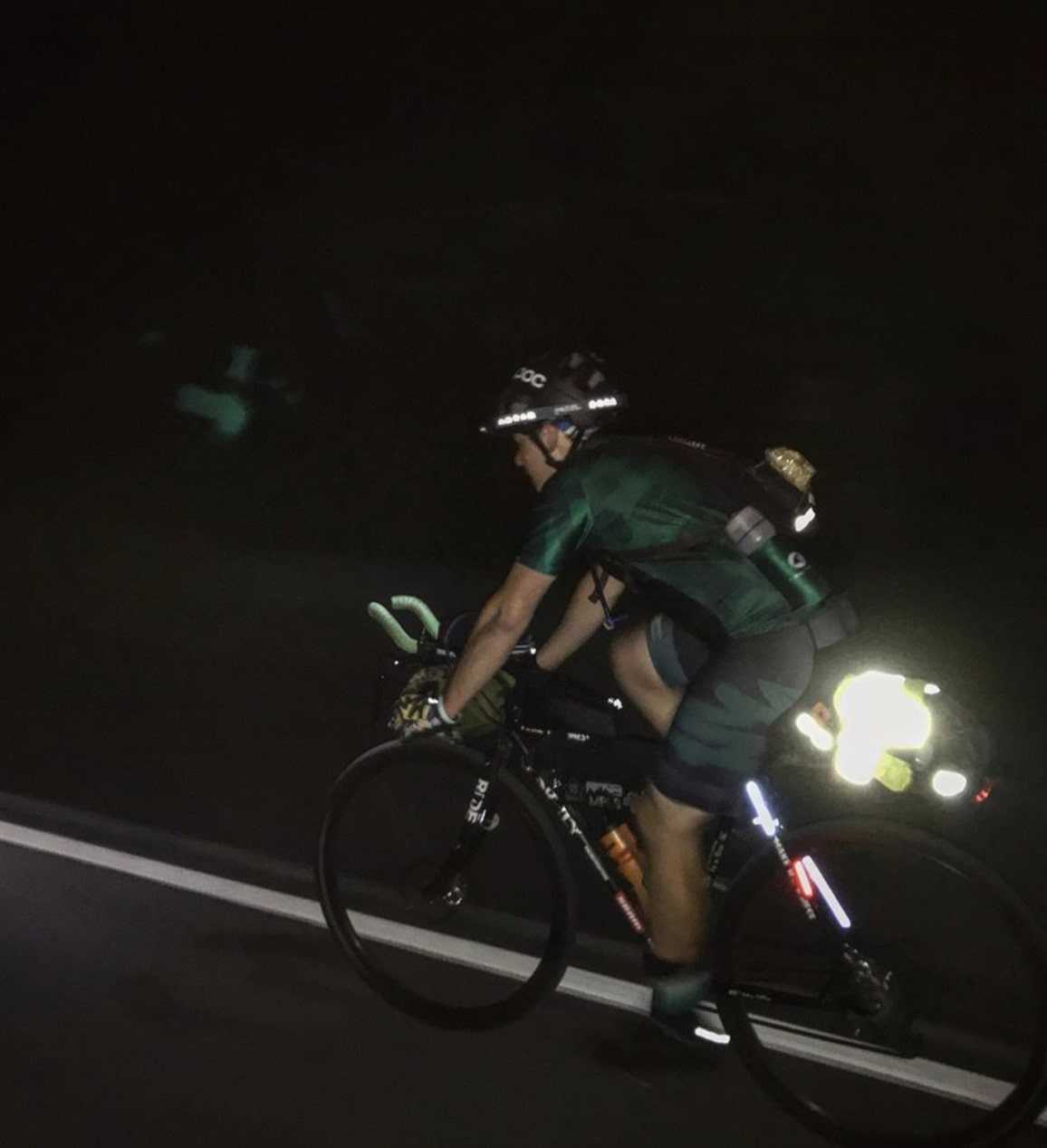 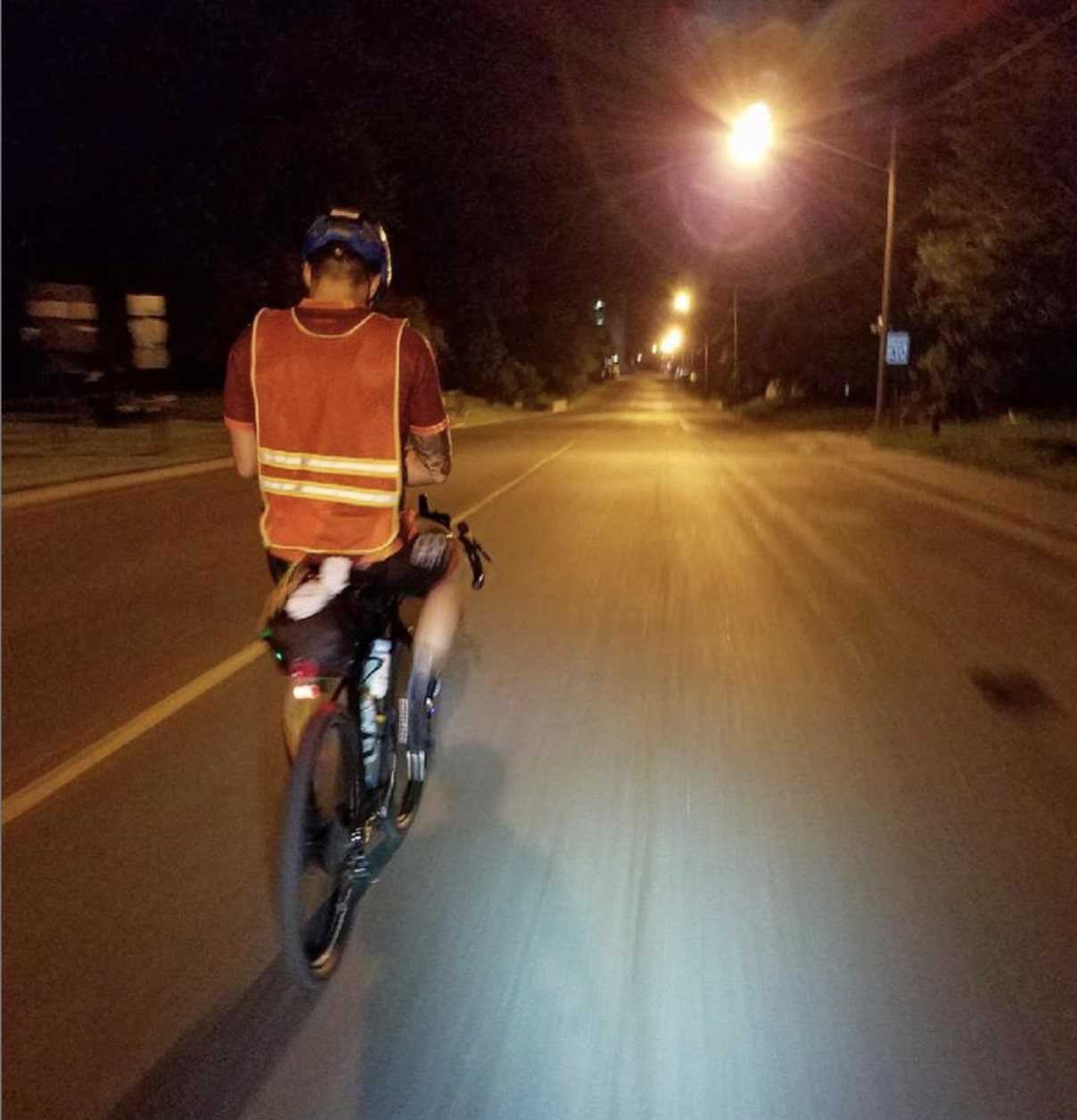 There’s a euphoric satisfaction that comes with conquering so many miles and seeing so many sights.  Watching the sun rise and fall, all from the seat of a bicycle, is an indescribable feeling.

Ian: Some of my favorite memories on the bike have to be from middle school and high school. Life was all about riding BMX bikes and learning new tricks. I had a really close group of friends growing up and we used to spend our summers nearly living outside. Riding BMX at all the local business buildings and getting yelled at for grinding their ledges. We never had any money because none of us had any jobs. We’d survive on the 50-cent day-old bread from Jimmy John's and the half-price donuts at Holiday Gas Stations. Not a responsibility in the world except to make memories with our friends and explore new areas of the city to find the best BMX spots. Good times. 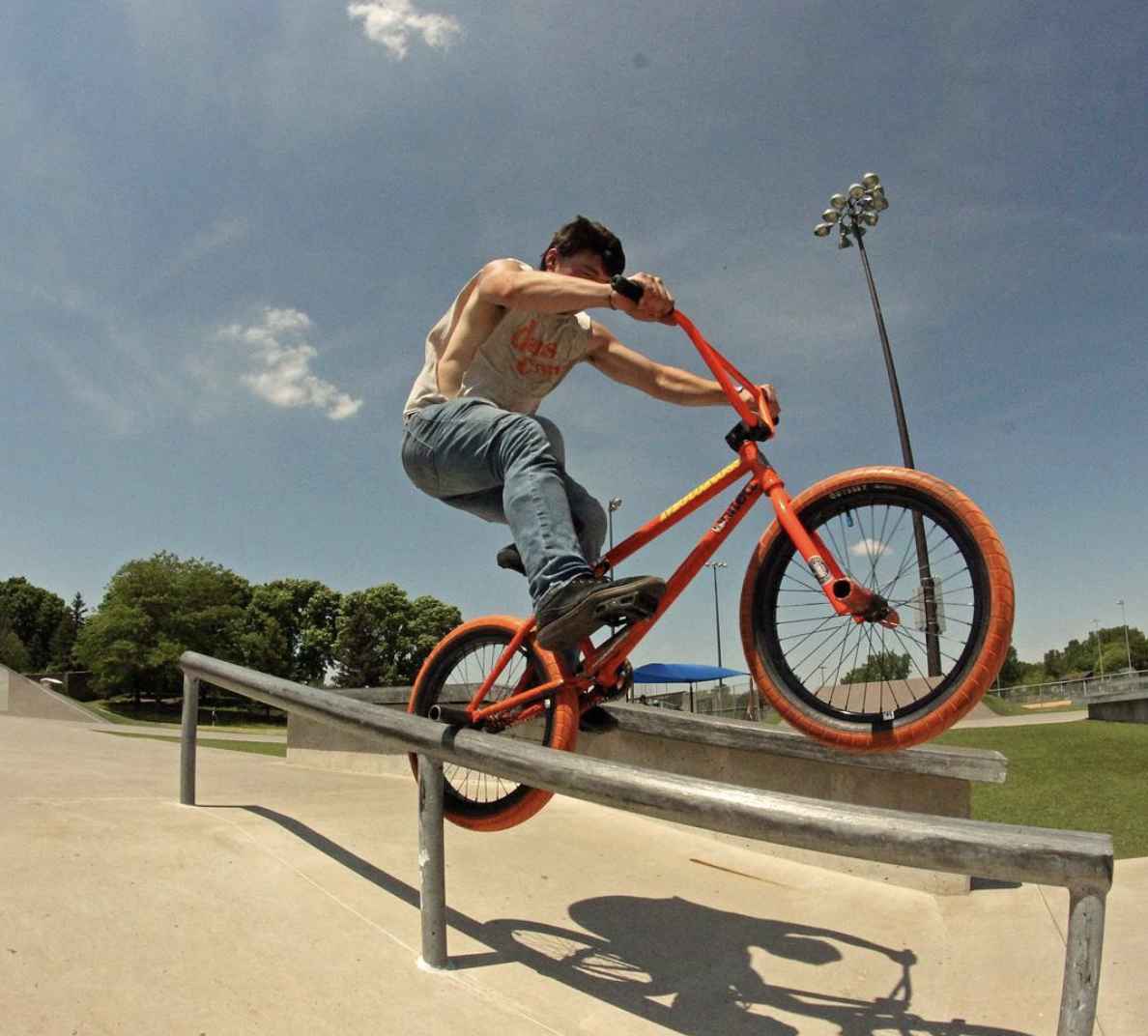 Alex: It’s so tough to pick just one. I’ve always wanted to bike in Ireland the landscape looks amazing and it’s on my bucket list to ride along the cliffs at the coast.  It would be fun to pack up and make a tour of the island by bike.

Ian: Iceland hands down. I was watching a few GCN (Global Cycling Network) videos and thought the place looked incredible. If money were no object, I’d spend a few weeks there in the winter and explore the terrain via fat bike packing.

Alex- On Instagram @alex7price (just for the record, I put the number 7 in my username first.  The proof is right there...it’s after just 4 letters)

Ian- My Instagram is @makehappiness7 (it’s better than Alex’s)