It's time once again for another edition of Humanoids of Surly. Last time, Rachel from Minneapolis gave us a glimpse into her life's work dealing with animal sex and genitalia (UPDATE: Rachel has officially gone from Ph.D. student to Ph.D. CANDIDATE. So congrats Rachel!) and all the things she does on her Straggler.

For the second edition of Humanoids of Surly, we take a trip out to Portland to hear from Madi Carlson. Madi pushes the limits of possibility aboard her custom-painted Pinkto Bismol Big Dummy. Having two kids, one dog, and zero cars may seem like a challenge to many people, but not Madi. She's turned her Big Dummy into the ultimate family truckster and has done a pretty damn good job inspiring others to do the same.

Let's hear what Madi has to say, shall we? 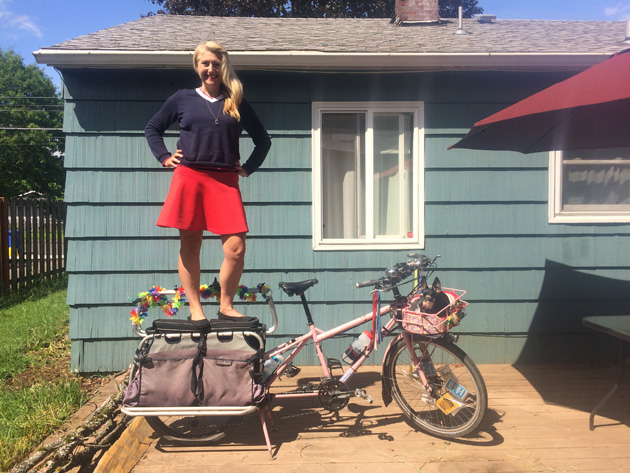 Hi, I’m Madi, a mom who bikes. I bike with my eleven- and eight-year-old sons and our nine-pound chiweenie dog named Pixie. “Mom who bikes” pretty much sums me up…except that it’s hard to embrace utility bicycling (biking for transportation versus biking for recreation) and not fall into advocacy. So I’m also a family biking advocate. I’m an everyone biking advocate, of course, but moms are an indicator species for safe bicycling. We appreciate bike infrastructure designed for all ages and abilities and the more of us you see, the more pleasant the conditions are for getting around by bike. I’m an author and write about – surprise – bicycling for transportation. My interests include talking about any sort of biking to anyone who will listen, and my hobbies are leading group family bike rides, going bike camping, shopping for groceries by bike, and carrying awkward and/or heavy stuff by bike.

Last summer we moved from Seattle to Portland and I’m really enjoying getting to know my new bikeable city.  Mostly I’m just filled with glee about how much flatter it is here. Of course, I knew the flattest possible way to get anywhere in Seattle (always check with a local family biker if you want to know a flat and/or low-traffic way to get somewhere in your city) so I was able to get around Seattle just fine…but it’s much less tiring to get around Portland. Being in a slightly smaller and less metropolitan city also means being able to reach new places by bike – we can bike to IKEA here! It’s right off a flat multi-use path we can pick up near our house. And we biked to an actual farm with a hay maze to get our Halloween pumpkins! That was off a different flat multi-use path we can get to easily from our house. Of course it’s not all rosy here in the City of Roses:  we discovered on our one snow day from school that it’s a pain to go sledding here. In Seattle one simply has to walk out the front door for a great sledding hill. Here we had to bike two and a half miles to find a decent slope. 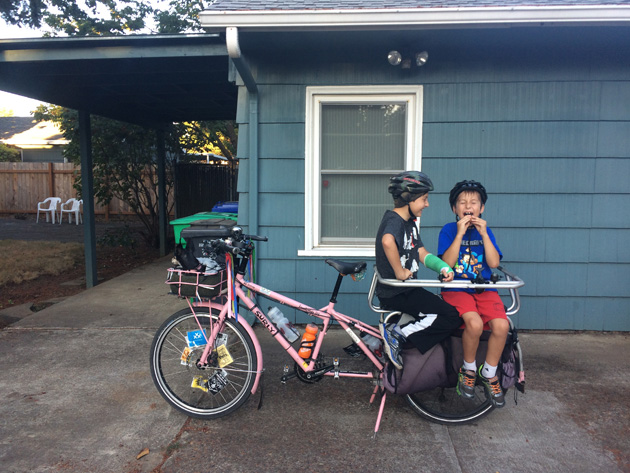 It’s in my blood. My mother was born in the Netherlands (bikiest country in the world!) and she’d bring us home to visit with her family every few years during the summer. So I grew up getting a taste of riding bikes everywhere for weeks on end…mostly chasing after my grandmother on windy islands, pushing with all my might against the pedals of a clunky rental bike. When my Dutch cousins started having babies and putting them in cool seats on their bikes I knew I’d someday do the same, even though I’d never seen any kids on their parents’ bikes in America at that point.

My first kid-carrying contraption was the same Dutch bike seat my cousins all used – the Bobike Mini – found on eBay and attached to the front of a too-big beach cruiser that’d been collecting dust in my garage. It was awesome! I got a bike with gears just before having my second baby and added a second seat – the Bobike Maxi – to the back of the bike in order to fit both kids. It was great to have all three of us on a bike that fit on the bus and have my body as a barrier between “Mr. Stranglehands” and his brother. It was hard to admit we were outgrowing that sweet little bike – I lengthened my stem three times to accommodate growing toddler legs in the front seat. I kept my saddle much too low in order to reach the ground since I couldn’t slide forward due to the Bobike Mini. I also pedaled with my feet on the outer edges of the pedals and forward a bit to avoid heel strike with the growing feet of the kid behind me and aimed my knees out to the sides to avoid the front seat. But we made do for years and years like that. Note: on a proper Dutch bike there’s sufficient space to fit kid seat, knees, and heels. But Dutch bikes are made for Dutch terrain and I couldn’t have managed biking around Seattle on one.

Obviously I should have got my Surly much sooner than I did and for that I blame one of my Dutch cousins. The first time I saw a bakfiets (the longjohn style cargo bike with a big wooden box in the front) I was 13. I gasped and stopped dead in my tracks gaping at it. I ran after my oblivious cousin, grabbing her arm and demanding she tell me what I was looking at. She scoffed and said those were just for rich Dutch mothers and no one in our sensible family would ever have one. My cousin was the coolest and wisest person I had ever known so of course I would never ever betray the family and get a cargo bike of any sort.

My kids were four and two-and-a-half when I finally came to my senses and got the bike that made me who I am. I’ll always have the fond memories of figuring out how to carry stuff for three people on my first mamabike – wearing my groceries tucked in my ring sling baby carrier, small canvas bag of beach toys looped over the front baby seat’s windscreen, stroller bungeed to the side of the basket only half accessible under the rear baby seat. But the moment I shoved off on my Surly and realized I could stand in the pedals to climb a hill again and had more storage than I knew what to do with, I never looked back. 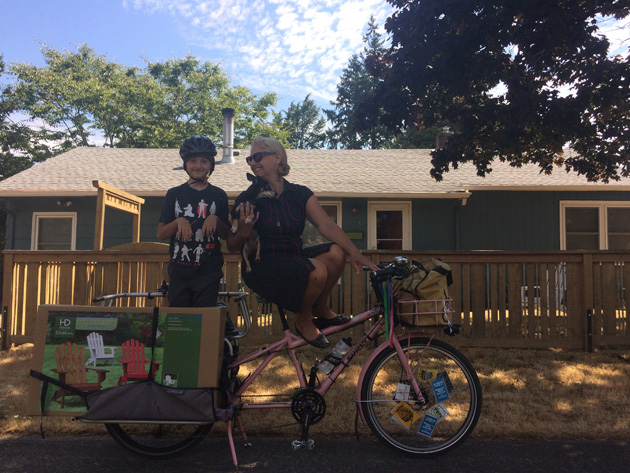 I have a Surly Big Dummy longtail cargo bike. No, they don’t normally come in pink, I had it powder coated. I’m curious to ask Surly what they’d name this color, but I’m pretty sure the answer would be unprintable. I got my bike six years ago when I was “car-lite” and have since become fully car-free so it’s our minivan and I ride it everywhere. The wonderful thing about longtail cargo bikes is that they made it easy to fit both kids and their bikes onto the bike. When I got this bike both my kids were riding balance bikes and I would stick the kids on the deck and their little bikes in the cargo bags and pedal us somewhere safe enough for them to ride. When they graduated to bigger bikes with pedals I would “bag-and-drag” their bikes – front wheel in the cargo bag, back wheel trailing out the back. Now I have a special two-bike fork-mount tow hitch I can attach to the back of my bike if I want to tow their bikes and still have room in my cargo bags to carry additional stuff, but fortunately, at eight and eleven they’re mostly riding their own bikes these days. However, I always bring my Big Dummy when we go out, just in case one kid and his bike needs a lift. Plus you never know when you’re going to find a free table on the side of the road. 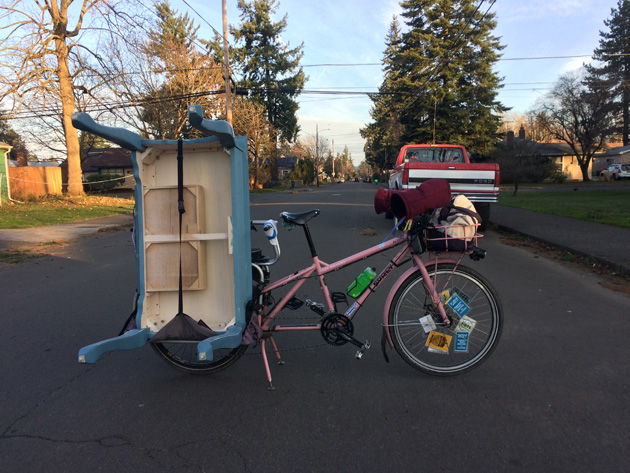 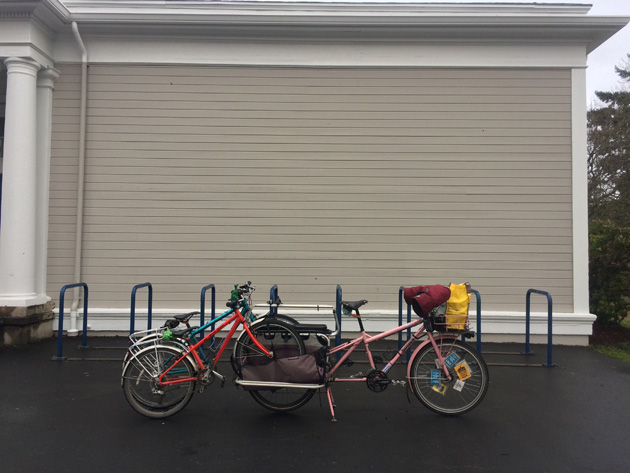 My bike enables me to do anything I’d need to do with a car. I can buy enormous amounts of groceries, and still pick up the kids from school, and even add in an impromptu trip by the library for more books than we can possibly get through before they’re due. With a car, combining errands like that is mundane and forgettable, but doing it by bike is adventurous and empowering. The simple act of getting around with this bike capable of carrying three (I sometimes borrow a spare) kids makes me feel like a superhero, even when I don’t have any precious cargo. I have high hopes my kids will someday help carry crap, but in the meantime, I can easily carry all our stuff (and our dog and her stuff) anywhere we go, even camping.

Bike camping with a broken foot last summer! Admittedly, I probably wouldn’t have gone had I not been the person who organized and led the trip, but thanks to my Big Dummy it worked out just fine. I had broken my foot the previous week – I tripped while mowing the lawn, but if anyone asks I was saving a litter of corgi puppies from a burning building and had to jump out a third story window. Walking was incredibly painful, but riding my bike was A-OK. I didn’t feel confident piloting my bike with the kids on board so this was also a huge weekend for them, as they had to pedal themselves all the way to the campsite for the first time. I made out just fine carrying our stuff and the dog and the kids did even better than I thought they would. So I led a longer, hillier camping trip three weeks later, foot still broken. My Big Dummy weighs about 75 pounds (though you can easily build a svelter one), but it was the bike I felt most comfortable riding while my foot was healing. It’s a smooth, stable bike, even when it’s loaded down with a bunch of stuff. 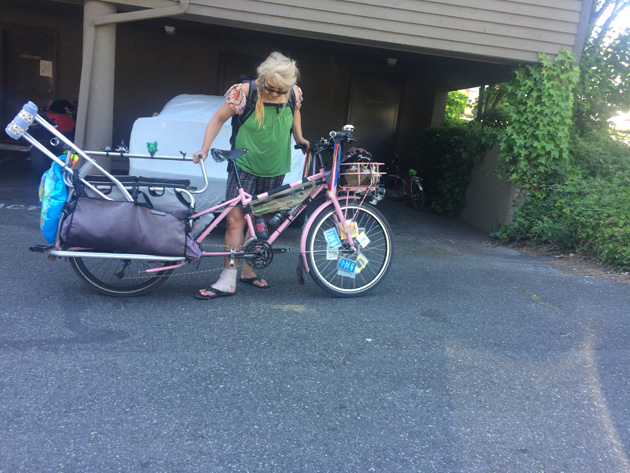 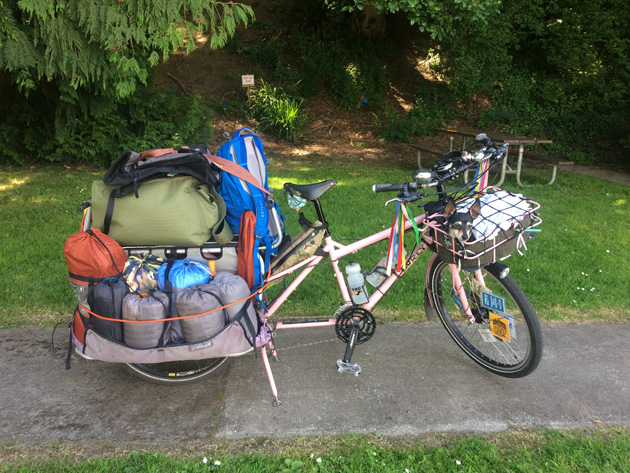 It’s tempting to use this question as an excuse to have myself, my bike, and my kids imaginarily flown to the Netherlands and ride around with my relatives. I’ve never used a bike with gears there! Not that there’s anything wrong with those near-indestructible single-speed omafietsen.

But more realistically, I’d love to bike in San Francisco for the first time. Half of my childhood was spent in the East Bay and I biked all around there, but never in San Francisco. When I moved back for a few years as an adult I commuted to San Francisco for work, but never by bike. Back then everyone I knew who rode a bike or motorcycle in the City had been hit by people driving cars. I commuted by longboard skateboard – one mile from home to BART on the East Bay side and then one more mile to work in San Francisco. And I got hit, too. A man in a minivan made eye contact with me, yet still blew through his stop sign and plowed into me in an intersection. The streets have changed drastically since then, but I haven’t been back to see for myself. Plus I have a bunch of mom friends who bike with their kids there now (indicator species, remember?). I’d love to join them!

I’m available in book form: Urban Cycling: How to Get to Work, Save Money, and Use Your Bike for City Living, probably at your local library and bookstore, but also all the usual online places. There’s a chapter about biking with kids and cargo bikes, but it’s a book for everyone interested in using a bike for transportation.