Spring has arrived in the part of Minnesota where most of us live.  42 degrees yesterday morning at 6:00 felt like summer compared to what we had been experiencing.  I set out to cleaning my garage because the wife has been “asking” me to do it for a while.  We had a kitchen remodel done over the winter and the contractor used our garage to set up table saws, chop saws, and other kinds of saws that seem to be most efficient at covering everything in said garage with an even coating of sawdust.  Back when he started I knew this would be the case, but instead of taking preventive measures of covering our stuff in sheets or tarps I took the lazy approach of saying that I would clean it up once spring arrived.  I also rationalized that it probably wouldn’t be that bad.  I was wrong.

In our garage I have about 11 bikes of my own and another six bikes shared between my wife and two kids.  I also have boxes upon boxes of bike parts strewn about on shelves around the garage, accompanied by camping gear, fishing gear, and the usual detritus of a typical two-stall garage.  There are a lot of surfaces to collect dust in there.

I spent the morning on the camping and fishing gear because these seemed like low hanging fruit compared to the bikes.  By the time I got to my first bike I realized that my logic was correct.  It was my son’s 24” BMX cruiser and it was covered in dust and grime from last season’s thrashing.  I started with this one because I’m selling it and needed to get it ready for a friend who wants to buy it for his son.  It always amazes me how dirty a bike gets in just a single summer season of normal use.  Cleaning hub shells and individual spokes in the wheels is what I hate the most, but once the wheels are done the rest of the bike is not too bad.

I cleaned a couple more bikes before getting to the one I had been looking forward to the most:  my 1x1 Rat Ride 11th Anniversary bike.  Some of you might remember this bike, others may even own one.  We made this bike 5 years ago and did about 500 of them.  During the vetting process of figuring out what this bike should be, Dave’s version won out.  We spec’d it with 24 inch Large Marge rims, some 24” x 3” slick tires, gloss black paint with red decals, and an array of tasty parts.  I hadn’t planned to buy one for myself but when they arrived in our warehouse they didn’t sell as well as anticipated, so I made it possible for all Surly employees to be able to buy one for a killer price.  Working for Surly has its perks.  Only one problem was that I had already bought mine before the deal was made.  Shit.

I probably should have left the bike as-is with the stock parts build for sheer collectability, but I wanted to make it my own, so I built some new wheels using a Shimano Alfine 8-speed rear hub and a matching Alfine generator hub with front light kit.  I sold the stock wheel set and Surly Torsion Bar in black with red graphics to help pay for the spec change.  I also purchased a Jtek bar end shifter for the Alfine hub so that I wouldn’t have to use the less than elegant twist shifter that Shimano makes.

Pulling the bike down from its hook, dusting it off, airing up the tires and wiping off the grime and crusted mud brought me back to when I built this bike up.  I had been neglecting the bike for a couple of years as other newer Surly bikes had taken precedence and become higher priority.  In my mind I had convinced myself that this bike was less sexy or fun to ride that some other bike I had just gotten.  So, when I finally mounted pedals on it and was ready for a test ride I had pretty low expectations.  I got on the bike with the mindset of getting the bike dialed so that it would be in the best possible condition for selling it.  What I got instead was a pleasant surprise.

The bike is a lot of fun to ride.  It’s true that the 24” x 3” tires are not as fast as larger and skinnier tires would be, but the added comfort and stability are confidence inspiring, and the bike looks bad ass.  The Alfine hub shifted well and provided the appropriate gear range needed for casual cruising.  The upright position afforded by the Nitto North Road bars is awesome for rubber necking the spring time scenery, and a part of me couldn’t help wondering if some of that spring time scenery wasn’t rubber necking me right back for how stylish my ride looked.  OK, not really.  If anything I was attracting attention by riding a 22-inch frame with 24-inch wheels.  My wife commented about how small the bike looked under me when I was riding it.

When I got back from my ride I had changed my mind about wanting to sell the bike.  Or, I should say that it put me firmly on the fence about what to do.  A lot of people experience buyer’s remorse after buying something.  I almost never experience this.  More often, I experience seller’s remorse after selling something.  This is how I am feeling right now.  I don’t really need to keep this bike in my stable, and in fact I need to shed some possessions to remove some of the clutter that I have accumulated, but I feel as if selling this bike is selling a part of my past.  I know we (the collective “we”) cannot and should not hang on to everything we have in life, but I also know that we should prioritize what’s important and what is not, and shed the latter in order to not be buried by one’s possessions.  To desire is to suffer, but is it better to hang on to something that brings some pleasure than to sell it in order to free oneself of worldly desires, only to suffer from the remorse of having sold it?  Or maybe I will suffer more from keeping it, feeling sad about neglecting it once the excitement of rediscovery has faded and it has once again been relegated to hanging on a hook.  As history tends to repeat I know that the wife will get noisy about my lack of action and will pressure me to “use it or lose it.”

So, what should I do?  Should I sell it or should I keep it?  Most of you will say keep it.  I know this because for one thing you are a predictable lot, and for another I know that you couldn’t care less about the predicaments of a privileged prick such as me.  First world problems, you say.  Well you already know what you can do with your self-righteous attitude.   Need I elaborate?  One thing I do know is that I’ll never sell my custom painted Karate Monkey original that also hangs in my garage with its cobwebbed spokes and muddy tires.  I hardly ride it now that I have a Krampus, but that is hardly the point.  In my mind I have prioritized my Karate Monkey as something dear and special, and as the years go by I treasure it increasingly, like one of those bar graphs that go up, like a really tall building, like Superman.  Once something is elevated to such status it becomes worthy of an heirloom.  Heirlooms are important because they leave behind stories long after the person who owned it is gone.  How cool it would it be to inherit your great grandfather’s 1x1 Anniversary bike 100 years from now?  Maybe my great grandson will read this blog 100 years from now and wonder the same thing. 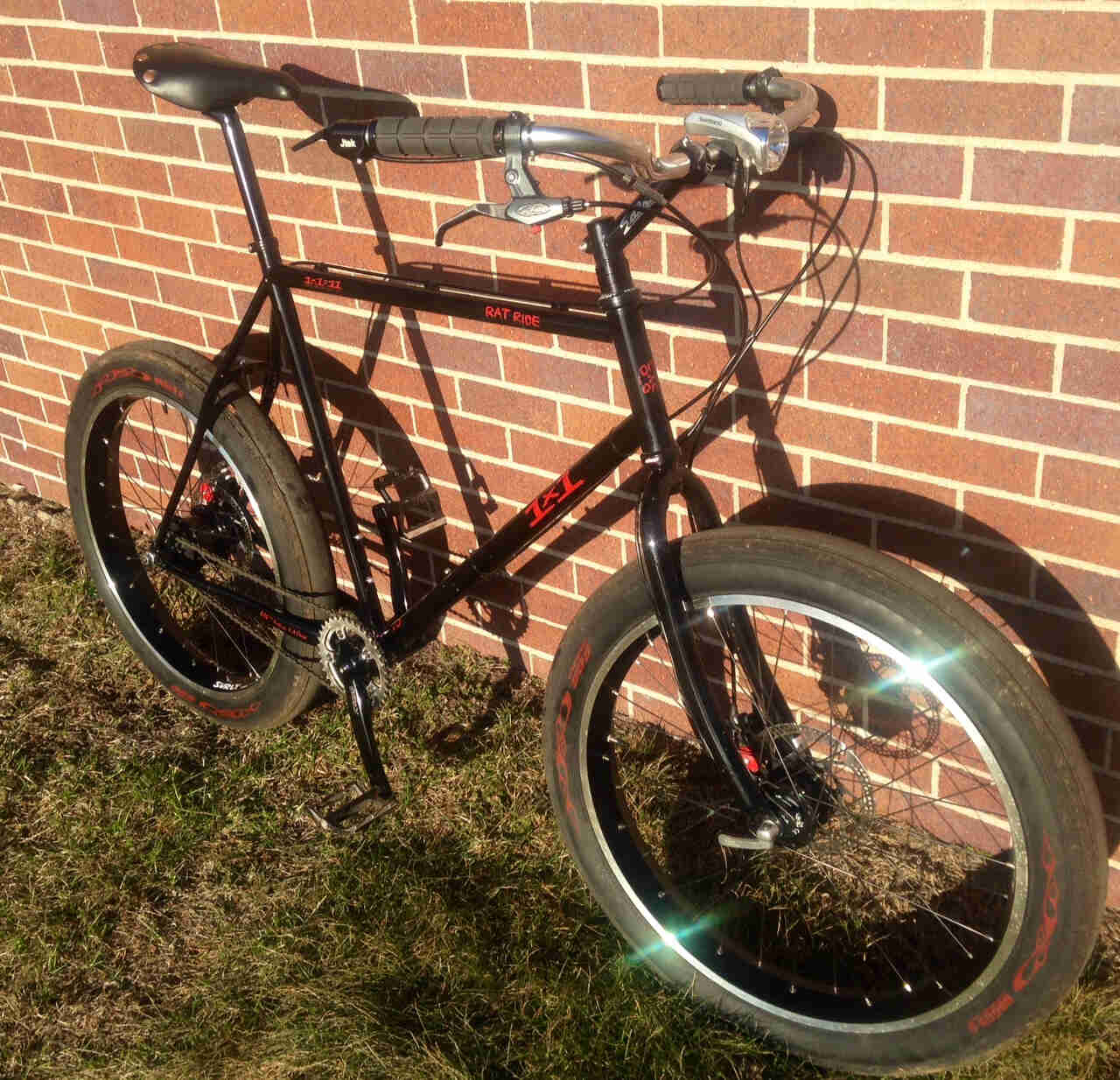