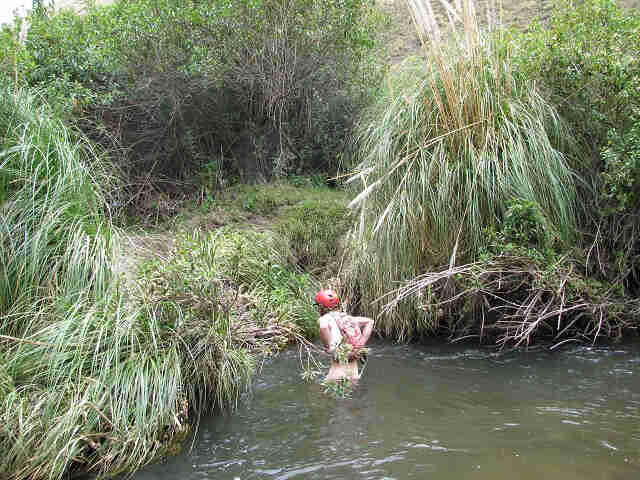 Lungs burning and legs feeling like cement, I pushed the Krampus up the last steep section to the high mountain pass. We were on day three of a bikepacking trip around the iconic Cotopaxi volcano in Ecuador. The high elevation was pushing my body to the limit, but the spectacular views were well worth the suffering. My guide on this loop was Michael Dammer, who has been exploring these mountains his whole life. He and his family live and work on their family farm in Pifo, along with his two brothers and their families. 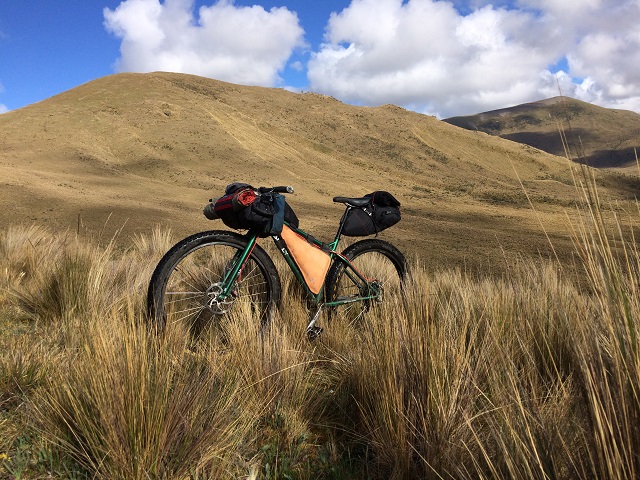 Krampus in its natural habitat

The main reason I made the voyage to Ecuador was to drop off a top secret Surly Prototype for use on the Dammer farm. I was introduced to Michael through a mutual friend, Cass Gilbert who has done multiple bikepacking trips with Michael and his brothers Mathias and Thomas.

After a couple days on the farm, we headed out for Ticatilin to start our trip around Cotopaxi. We found a safe place to park the truck, and set out — Michael on a Pugsley, and I on a Krampus. That first day was low mileage due to our late afternoon start. We slowly traversed on many double-track roads, portaged our bikes over tall gates, and climbed toward Cotopaxi National Park. As the sun started to set, we scouted for a camp spot, settling on a flat area as darkness surrounded us. I was grateful for the short day since I was already feeling the effects of the high altitude. 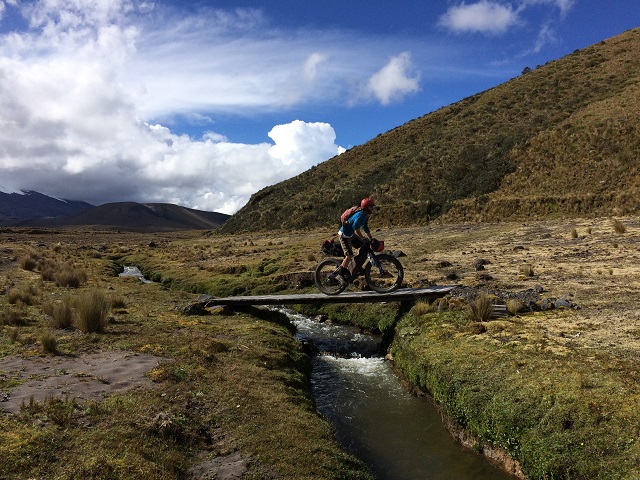 Michael on of one of the few dry water crossings

The next morning, we started rolling early and decided to delay breakfast until later as we were low on water. Double-track and gravel roads meandered upward toward Cotipaxi National Park campground, where we planned to refuel with food and water. The pace was slow and steady as we settled in on our tour. The cool morning temps were perfect for riding and it wasn’t long before we worked up a craving for some hot breakfast. Michael brought along Guayusa, a local tea grown by the Kichwa people in the Amazon, and made a hot cereal with polenta, dried fruit, and dehydrated coconut milk. It made for the perfect base for the long day ahead. 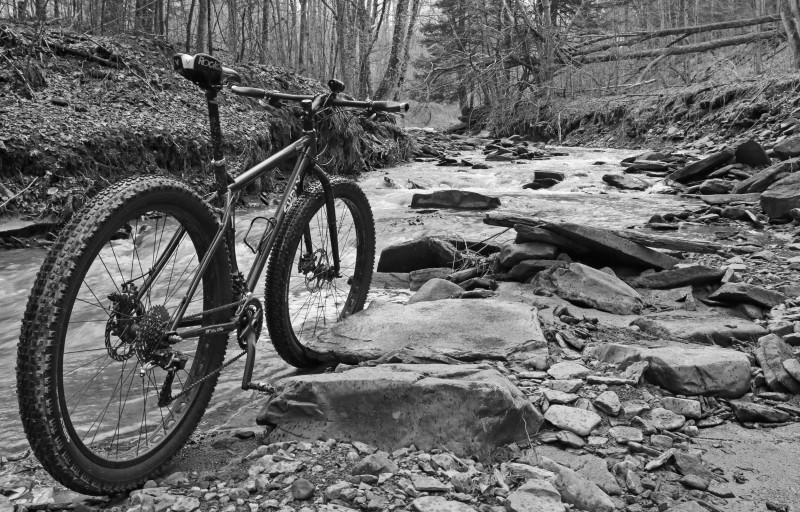 The next section of our route brought us to the more remote side of the mountain where we left roads behind and entered much more diverse terrain. Sometimes, we would follow cattle trails and singletrack; other times, we’d ride across the open highland meadows called Paramos. The low, dense, and water-logged grasses made for soft and slow riding. The further we rode, the more our fat and plus-size tires started to shine. The fat tires offered an advantage in the soft, wet sections. One section was so wet that the Pugsley pulsed waves though the ground like the wake of a boat. The Krampus on the other hand, excelled in the more technical sections. Both bikes were great options for the route, they just performed better in different conditions. 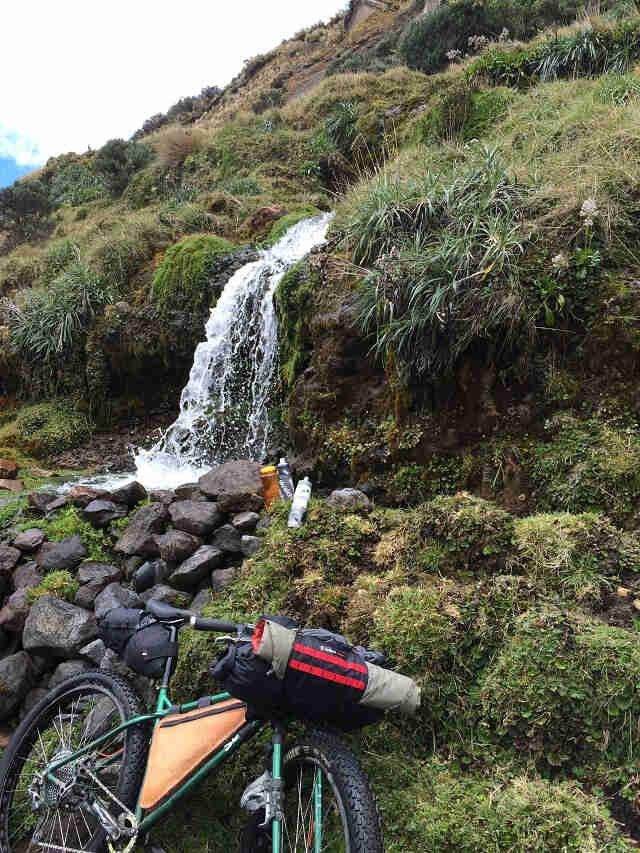 Later that afternoon, Michael asked if I was up for veering from our original plan to explore an old moto trail he’d heard existed. He said it might take us off course and could potentially cause us to double back instead of circling Cotopaxi as planned. I’m always one to prefer exploring new trails rather than taking the beaten path, even if it means doubling back. The new route was the verdict — a decision that quickly paid off with our first long, twisty singletrack sections. It also kept us on track for completing our goal of circumnavigating the mountain. I had hoped this might become a recurring theme of our ride, and felt we made good riding companions. We were given quite a scare when Michael went OTB in a hidden washout at high speed, narrowly missing the two boulders on each side of the trail. Luckily, he came out of it unscathed. 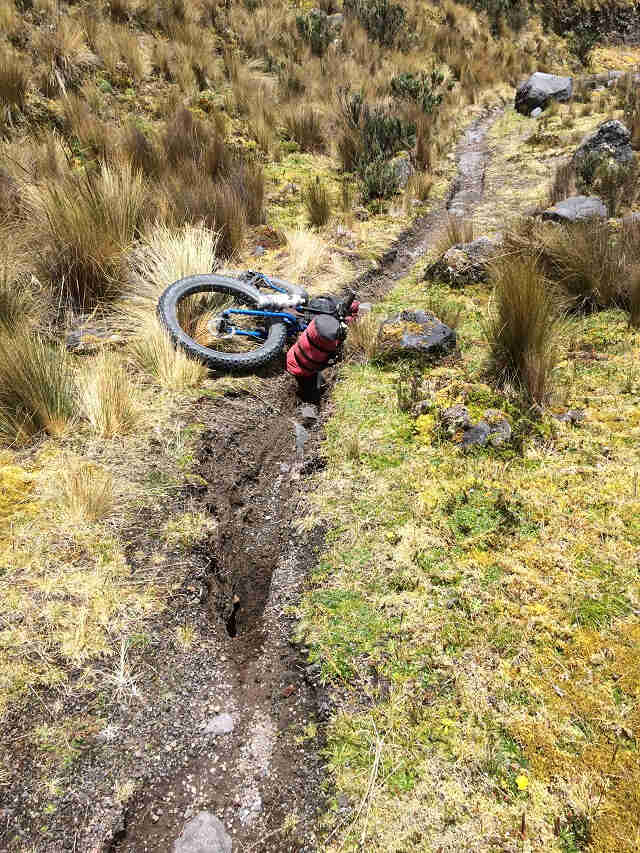 My only relief from the continued resistance on the diverse trails was the panoramic views that surrounded us. Ecuador is known for having some of the highest and most active volcanos in the world and we often had two or three snow-covered peaks in our sights as we traversed the mountain. Cotopaxi’s full view was still elusive and seemed to grab and hold the clouds as they drifted by. We frequently spotted alpaca high above us and even had an Andean wolf cross our path. The views helped me get though the physical challenges of riding the difficult terrain and the thin air. Michael was kind enough to offer breaks throughout the day when he noticed my smiles morph into grimaces. He brought along a fermented sugar cane elixir called Puñete del Inca (Punch of the Inca). He kept it in one of his son Koru’s medicine bottles, so we referred to it as “Koru’s medicine.". These breaks and medicine doses were the key to my survival and always lifted my spirits. 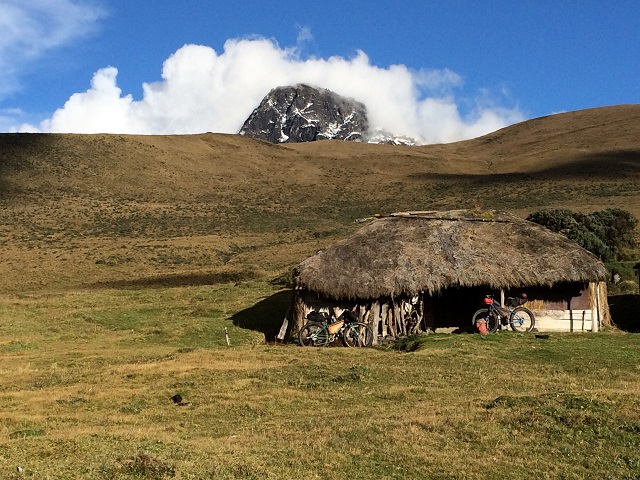 Our camp spot for the second night was near a traditional thatch farm house where Michael hoped we could resupply with water. After a long climb, we arrived with time to set up camp, eat, and relax before the sunset. The sky was clearing and Michael thought we might get a view of Cotopaxi the next day. The spot had epic vistas in all directions since we were near 4,000 meters. Three volcanos where within sight of camp including Quilindaña and Sincholagua. I was stoked we had decided to pack plenty of fresh food because it meant we ate well after such a long day of climbing. We snacked on dried sausage, a hard cheese, and a dense loaf of bread throughout the day. For an appetizer, we mixed tuna and avocado and spread it on bread. Then we made a soup with noodles, hot peppers, and fresh veggies from the farm. That night I didn’t sleep due to the high altitude — Michael said the lack of oxygen can sometimes effect digestion. After tossing and turning for a few hours, I got out of the tent for some fresh air. My sleeplessness was rewarded with a cloudless star-filled sky, like none I’d ever experienced before. I laid down on the frosty ground and took mental pictures of the amazing views until shivers drove me back to my warm bag where I finally fell asleep. 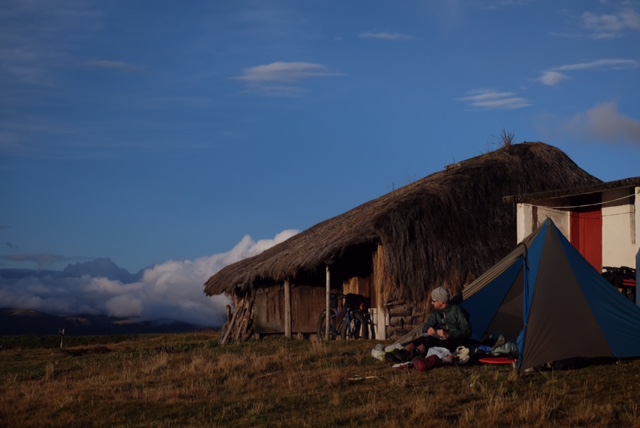 The next morning, we woke to frost covering the inside of our tent. We welcomed the brisk morning with hot tea while we packed up for our last day of riding. As we rolled out from camp, the sky was clear and we knew we were finally going to get a view of Cotopaxi. Within an hour of riding the edge of the glacier, it started to appear as we climbed toward our highest pass at 4,200 meters. Slowly, the peak at 5,897 meters came into view and followed us all morning. I felt extremely fortunate to have finally seen the mountain on our last day. It kept me motivated as we pushed higher and I struggled for air. 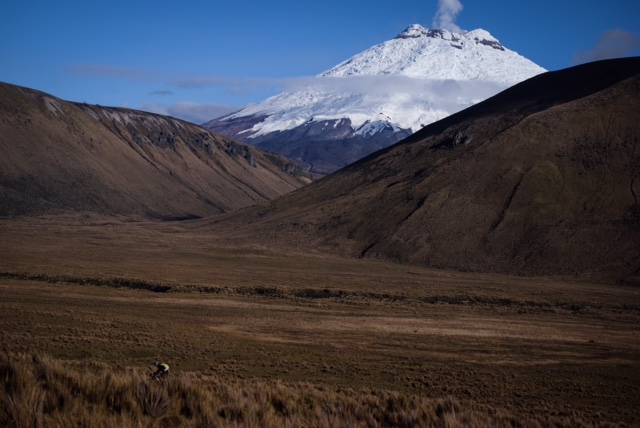 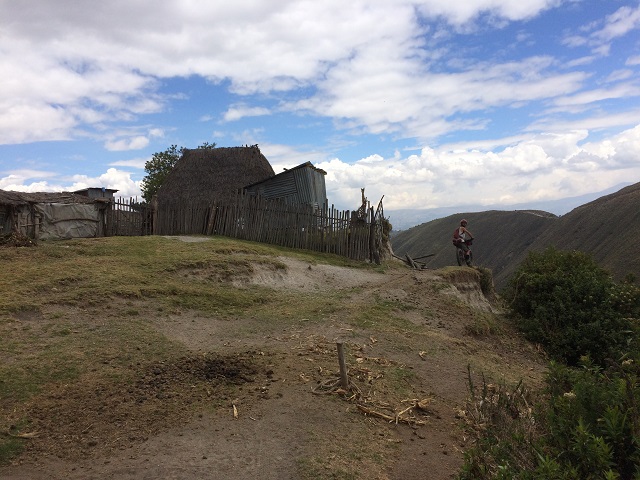 Our loop took us near part of this year’s Vuelta al Cotopaxi race course, so we decided to follow one of the new sections. The route brought us along a ridge that went though some farm houses and down a steep, technical singletrack with tight switchbacks. The loaded Krampus handled the descent with ease as we dropped down into a lush river valley. It was a relief to be descending more than climbing, as my body was feeling sluggish from the previous day’s endless climbs. 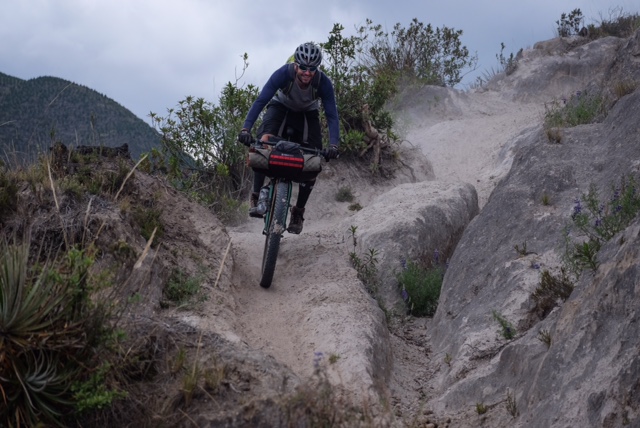 After a half-naked cold river crossing to avoid wet gear, we continued up and down the river valley on our return to the truck. After three days of riding, we were covered in layers of sweat and fine volcanic dust, so we took our lunch break next to a mountain stream and enjoyed a brisk rinse. Our final stop was in the small village of Mulalo for a refreshing cold beer and some tires squeezes from local children who had just been let out of school for the day. The last stretch was an relaxing spin on dirt roads that brought us back to our starting location. 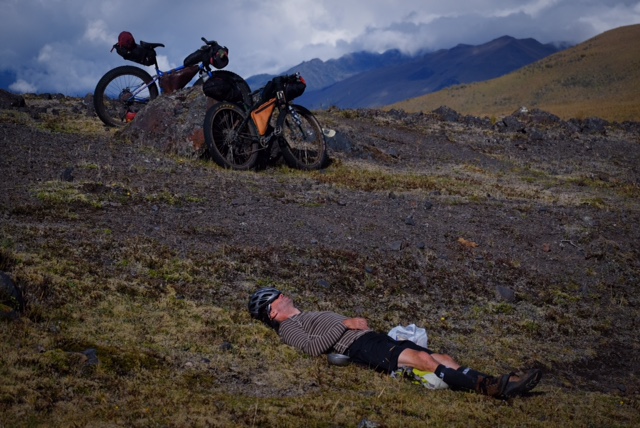 I went into this ride nervous about the altitude and climbing, and those nerves were warranted. I had a dull headache most of the time which forced me to keep the tempo slow. I rested at night, but didn’t feel like I was ever in a deep recovery sleep. Overall, the experience exceeded all my expectations and I’m already trying to figure out how I can get back for a longer trip. 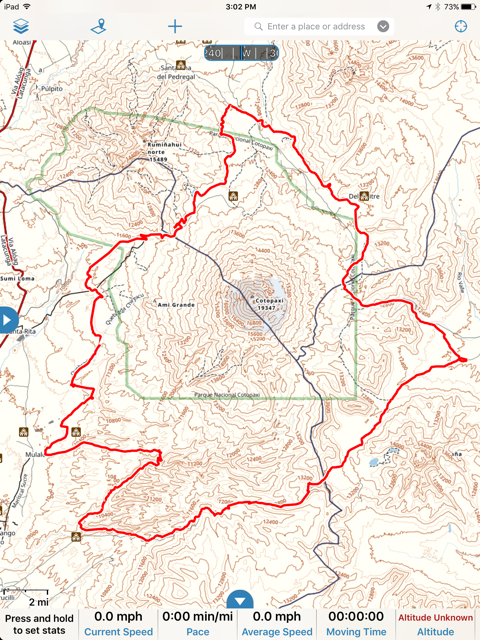 Thanks to Michael Dammer for exploring with me and teaching me so much about his culture. Thanks also to his family who welcomed me into their homes as though I was an old friend.

Check out more about the outdoor and environmental school, Nahaul that they operate from their farm.