BIKES OR BEER? A CHOICE NO HUMANOID SHOULD HAVE TO MAKE

It’s hard to pinpoint exactly when the tradition began, but these days every Surly team ride begins at the local bottle shop. These rides don’t progress any further till every bike in the group is good and loaded with beer — or “road sodas” as our fearless leader Pintz Guzld calls ‘em.

The Surly team didn’t invent the pairing of bikes and beer, of course. Hell, thirsty people have been commingling the two probably since there were bikes to ride. But if you look around, you’ll notice mountain bikers sippin’ suds beside dirt jumps from Toledo to Tokyo. You’ll see road riders knocking back cold ones as their recovery drink of choice every day of the week. And you’ll have a damn hard time finding a place to park your bike outside the local brewery; those racks are packed tighter than a pipe for smoking redacted tobacco. 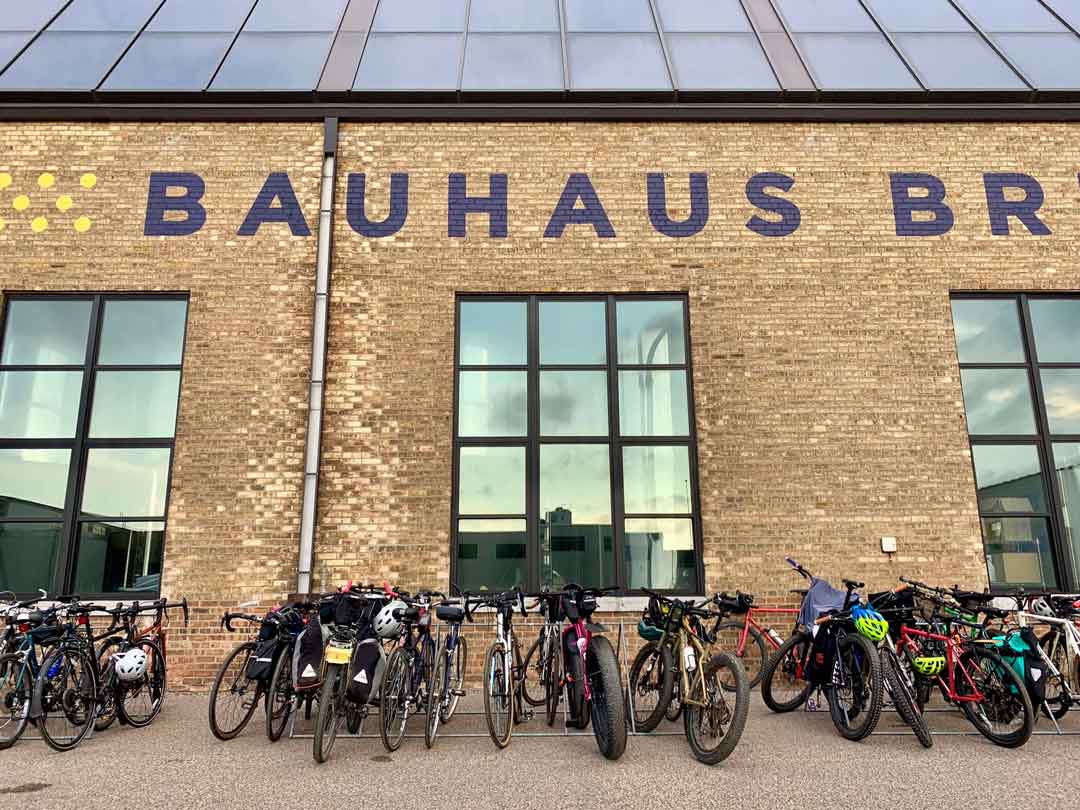 Hunter S. Thompson once said, “Good people drink good beer,” and I have it on good authority that plenty of good people ride bikes, too. But what is it that makes bikes and beer such a winning combination? Does turning the cranks simply make beer taste better? (YES.) Does drinking barley water make riding even more fun? (ALSO YES.)

In the interest of science, I set out to answer these pressing questions once and for all by talking face-to-face with a couple of smart professionals from the bicycle and beer industries. First up is Jules Collins, Technical Services Specialist at Quality Bicycle Products. 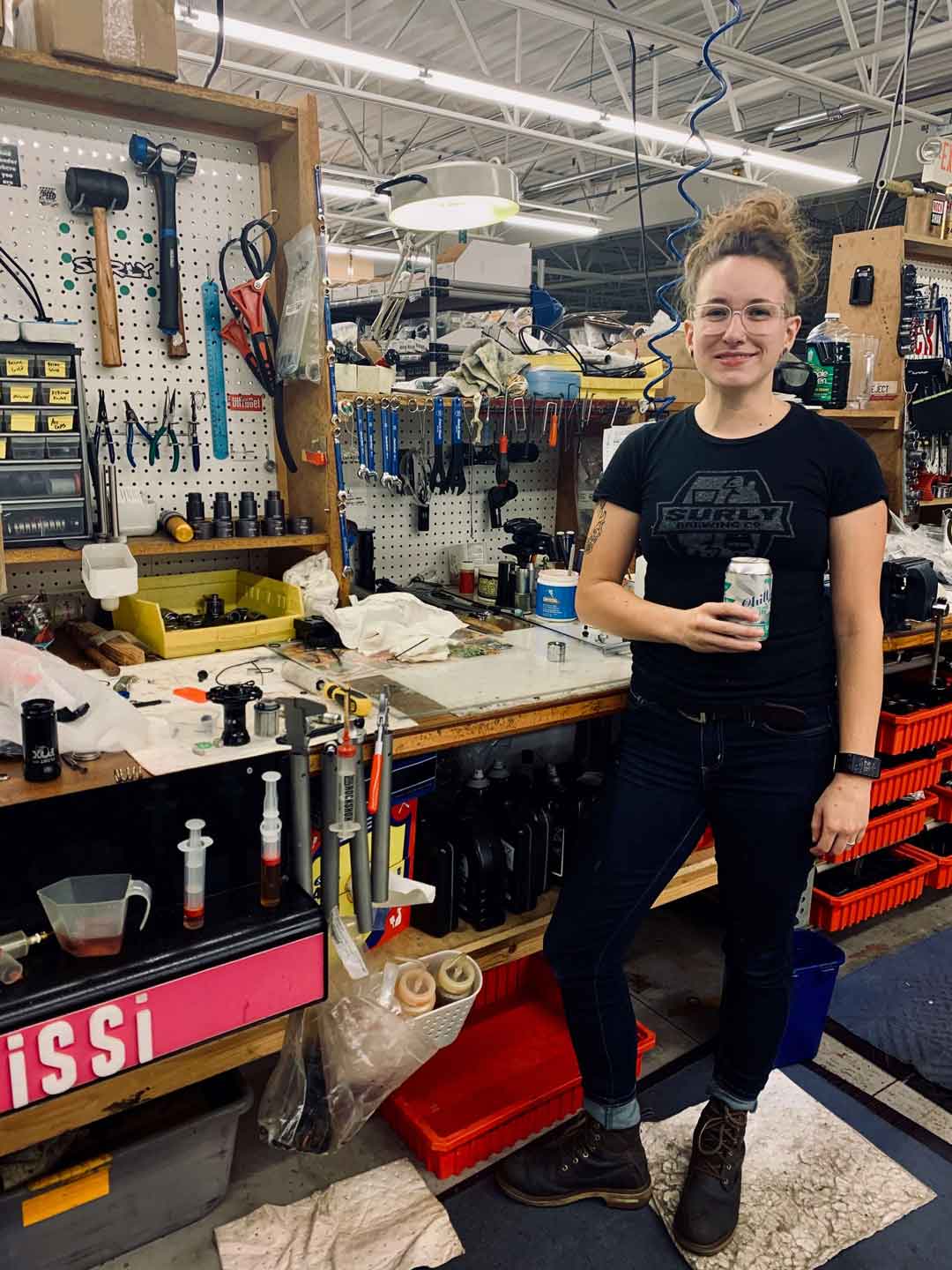 After completing a Physical Education degree at Kentucky’s Berea College in 2012, Jules moved to Bloomington, Indiana, and took a job as a bike mechanic at Bikesmiths Bicycle Shop. “I didn’t know anything about bikes at the time,” she says, “but that’s where I learned how to assemble bikes and do wheel builds.”

After a year there, Jules spent time working at shops in Cincinnati and Newport, Kentucky, gaining bicycle knowledge and working her way up the mechanic’s ladder. Being a shop mechanic gave Jules more than an education in bicycles, though — it also exposed her to great beer.

“When people came in for specialty work or wheel builds,” she says, “they’d always tip with a nice six-pack. Never something crappy, and almost always something local. They’d say, ‘I really enjoyed this IPA and I think you’ll like it, too.’ So then we’d get this relationship going where you could chat about the bike, but you could also get to know each other through beer. And the best part was, as you got better at fixing bikes, the tips got better!” 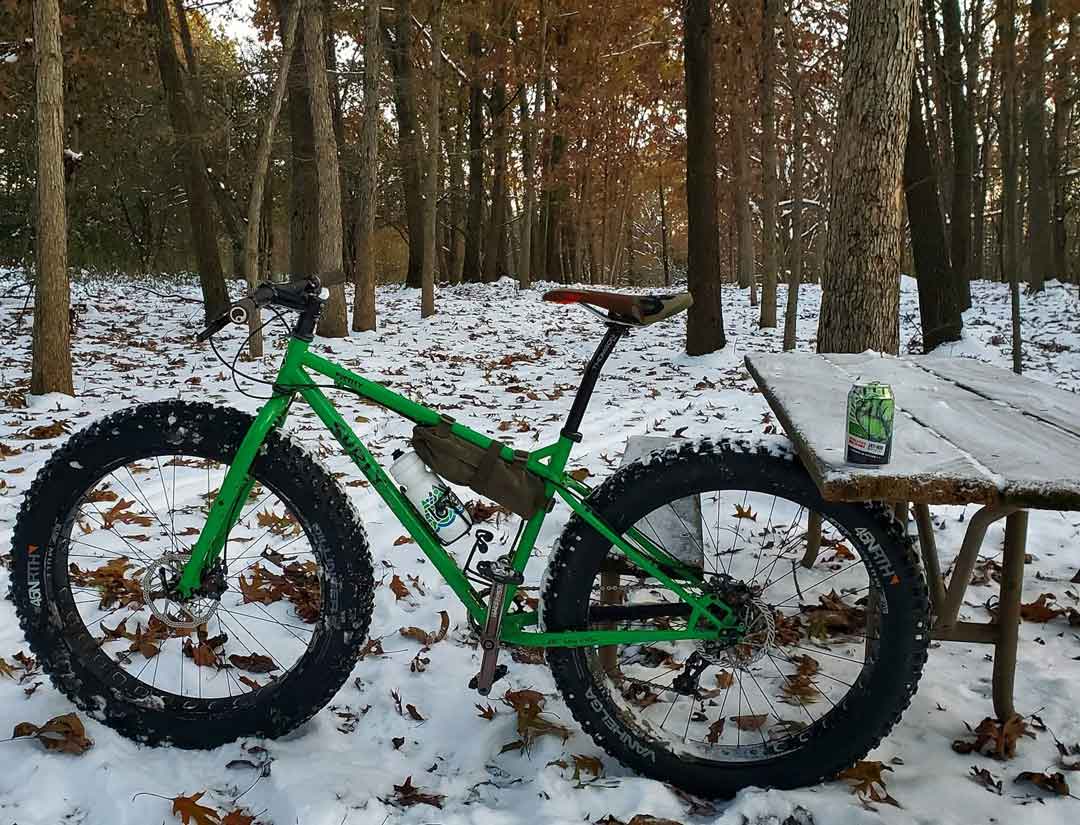 In 2016, Jules joined QBP as a Customer Service Agent, a job she held for a year before finally putting her Phys Ed degree to use. “I tried to use my degree for a year after the CS job, but it turns out I like bikes better than kids. So I came back.” Today she services hydraulics and suspension in QBP’s Shock Treatment Center, offering shops access to expert service and a vast library of tools. “It’s like being a mechanic in a shop,” she says, “except without the face-to-face interaction with customers.”

Fortunately for Jules, her co-workers help keep her beer fridge stocked in the absence of customer tips. “Bikes and beer are my two favorite things,” she says, “so when someone here needs help fixing their bike, I’ll ask them to buy the part themselves and I’ll do the repair off-the-clock.” Rather than accepting currency as payment, which Jules says she’d just use to buy more beer, “I just ask them to pay me with a six-pack of something they like.”

Jules does the same thing when she takes her own bikes to the shop for repair. “I tip in beer to keep the cycle going,” she says. “Beer is currency and a treat!” Though she’s not sure exactly why beer is so integral to the cycling community, she knows she doesn’t want to change a thing about it. “Beer has always been present since I’ve been involved in cycling. If you go to a cyclocross race, it’s just beer galore. Same at Homie Fall Fest. It’s a beer fest where you’re riding bikes.” 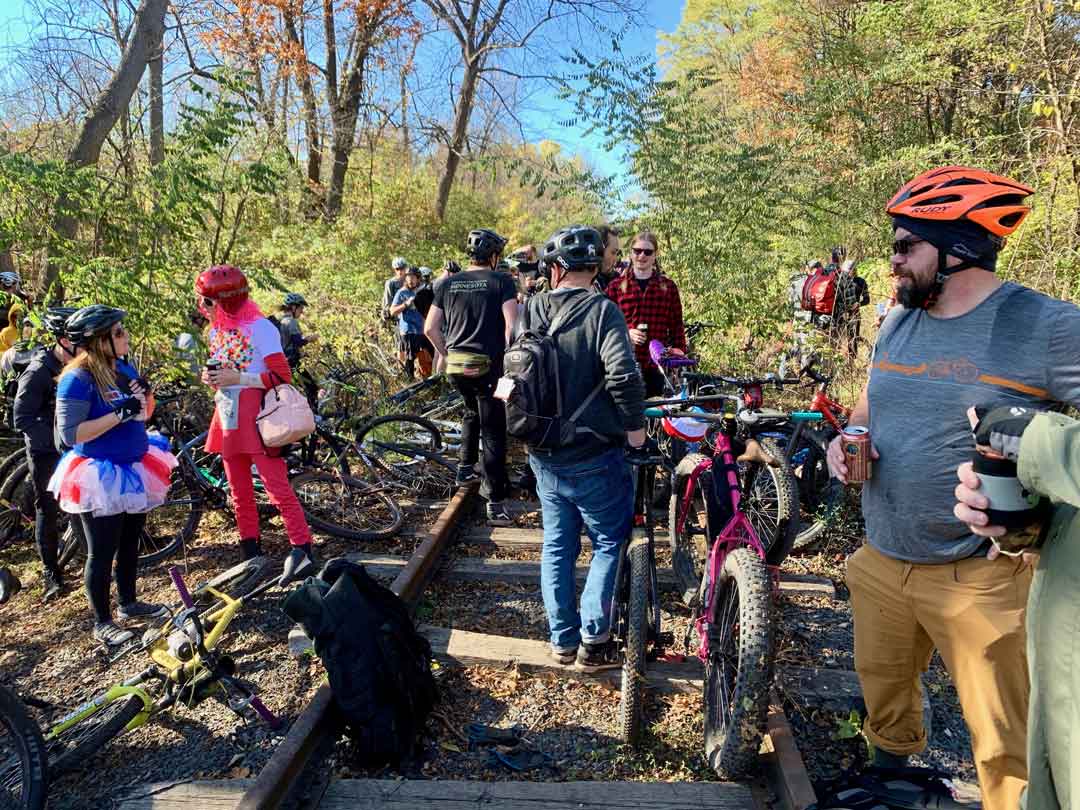 Andy Ruhland, Head Brewer at Bad Weather Brewing Company in St. Paul, Minnesota, can’t decide if he enjoys beer more than bikes or the other way around; when he’s not brewing supremely chuggable lagers, he moonlights as a mechanic at Erik’s Bike Shop in Highland Park. 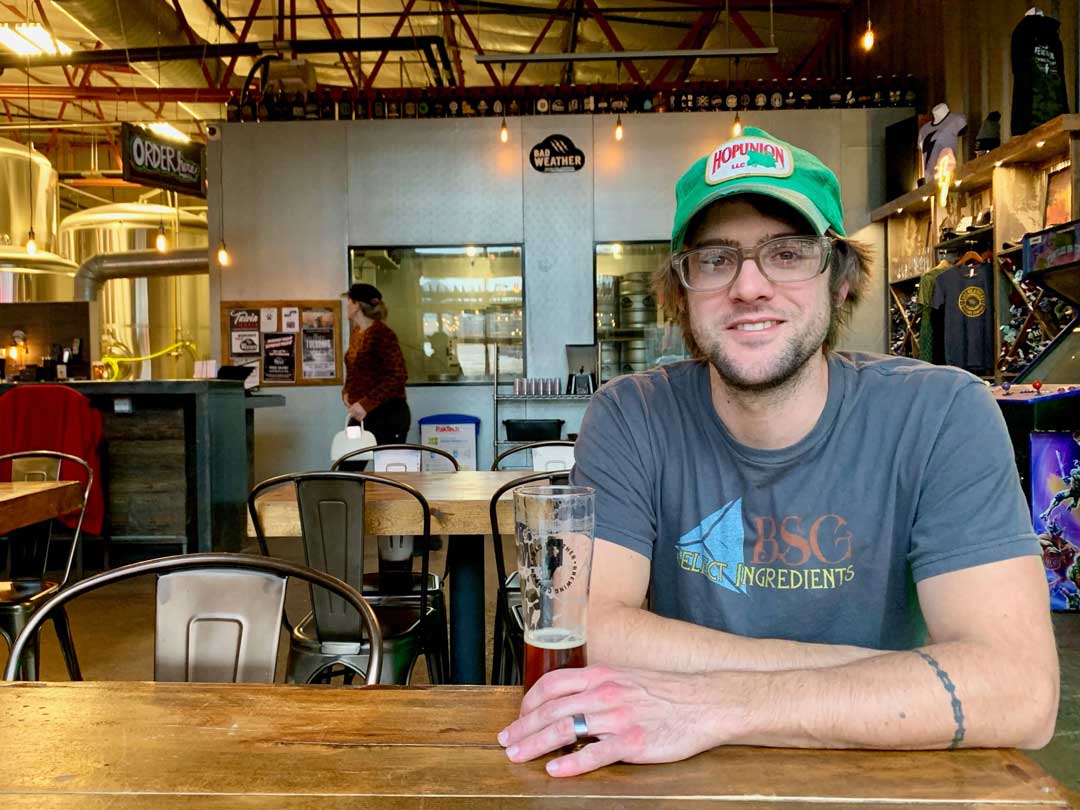 Andy, 37, discovered cycling as a kid — his friend’s dad was a hardcore mountain biker who’d race at Chequamegon every fall. “His kids were into it, so I got into it,” he recalls. “Then when I was 15, I realized I wanted to do some wrenching and got a seasonal job at Bennett’s in Roseville.” That first job led to a gig at Now Bikes & Fitness, where Andy worked for a year before starting a 15-year stint at Erik’s.

“I started working at a bike shop when I was in high school,” Andy recalls. “I thought my parents wanted me to go to college, so I went for a year and didn’t finish. They were supportive and told me, ‘Do what you want to do,’ so I just kept working at Erik’s until something came along.” What came along, of course, was beer.

“This was about 2004 or so,” he says. “I was living with a guy I met at Erik’s, my buddy Chris, and he brought it up one day: ‘Wanna try homebrewing?’ I was like, ‘Sure.’” Outfitted with a Brew & Grow Homebrew Kit called Erik the Red Ale, they cranked out an easy, basic beer with neutral flavors, and Andy was immediately hooked. “I’ll never forget the kit, the creativity involved in homebrewing, and being able to say, ‘This is something I made.’”

Around the same time he discovered homebrewing, Andy got turned onto some of Minnesota’s earliest craft beers. Basically raised on Miller High Life and parking-lot Negro Modelos consumed outside the Lebanon Hills Mountain Bike Trail, he began seeking out beers like James Page’s Amber, Summit EPA, and Surly Furious. 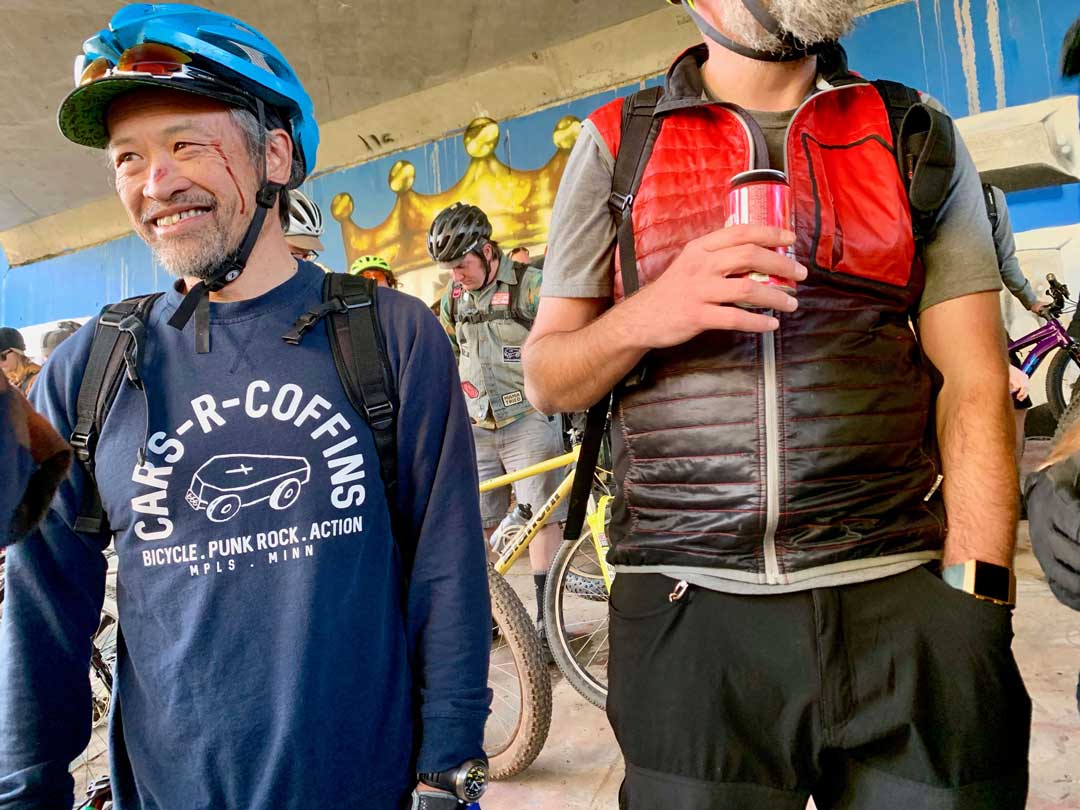 “Furious was a gamechanger for me,” Andy says. “Bitter, aggressive, bold flavors. Oh my goodness, a great beer. That was the beer that made me think, ‘OK, this is cool.’” When Andy heard another co-worker from Erik’s had gone to school for brewing, something he didn’t even realize you could do, he started buying homebrewing books — books that eventually led him to an American Brewers Guild course and an internship at Lucid Brewing (known now as Inbound BrewCo).

For 10 years, Andy split time between brewing, racing mountain bikes, and wrenching at Erik’s. He joined Bad Weather full-time just before they opened in 2015, and in early 2019 he started up at Erik’s once again to sock away extra money for daycare. Today, he likes how his two jobs complement one another.

“Both jobs are hands-on,” Andy says, “and they both involve problem-solving. Sometimes you’re under the gun, you know — busy environment with tight timelines — but I like to be on my toes and moving around. And at the brewery, I get to interact with the customers much more often and hear what they think of the beer. As a mechanic, you don’t always get to see the customer when they pick up the final product.” Bottom line, Andy says, “Both jobs are a passion job, the type of job where people really love working in it.”

Sporting a tattoo of a bike chain on his left forearm, you might think Andy’s love for bikes has won out, but that’s not the case. “I’ve been wanting to get a beer tattoo for years,” Andy says. “On the back of my calf, with barley and hop vines twisting together. I love hops, but I’m more of a malt guy. Malt is the heart and soul of beer, it’s where it all starts. But you’ve gotta have both.”

As for me, I wrote about and worked in the beer industry for a few years before taking my current copywriting gig with Surly Bikes. And after setting out to explore why bikes and beer are so intertwined with one another, I’ve reached the same conclusion as Andy: I’ve just gotta have both. Or, like Julia says, “Bikes and beer are my two favorite things!”

I like how beer and bikes can both be enjoyed solo, with friends, or even with strangers. I like how beer, like bikes, can be as simple or as complex as you want. You don’t have to know what hops are in your High Life or Hazy IPA to know you like drinking it, and you don’t need to know how to true a wheel to enjoy riding some bandit trails down to the local taproom. But when you decide you want to dig in and really try to understand historical beer styles and fermentation, or bike geometry and gear ratios, you’ll discover an entire world of passionate, interesting people who are eager to share their crazy ideas over a post-ride pint. Maybe one of ‘em could even help me decide which tattoo I should get first: Bikes or Beer?

In case the findings of this report feel like a copout, please rest assured that further explorations will commence immediately. 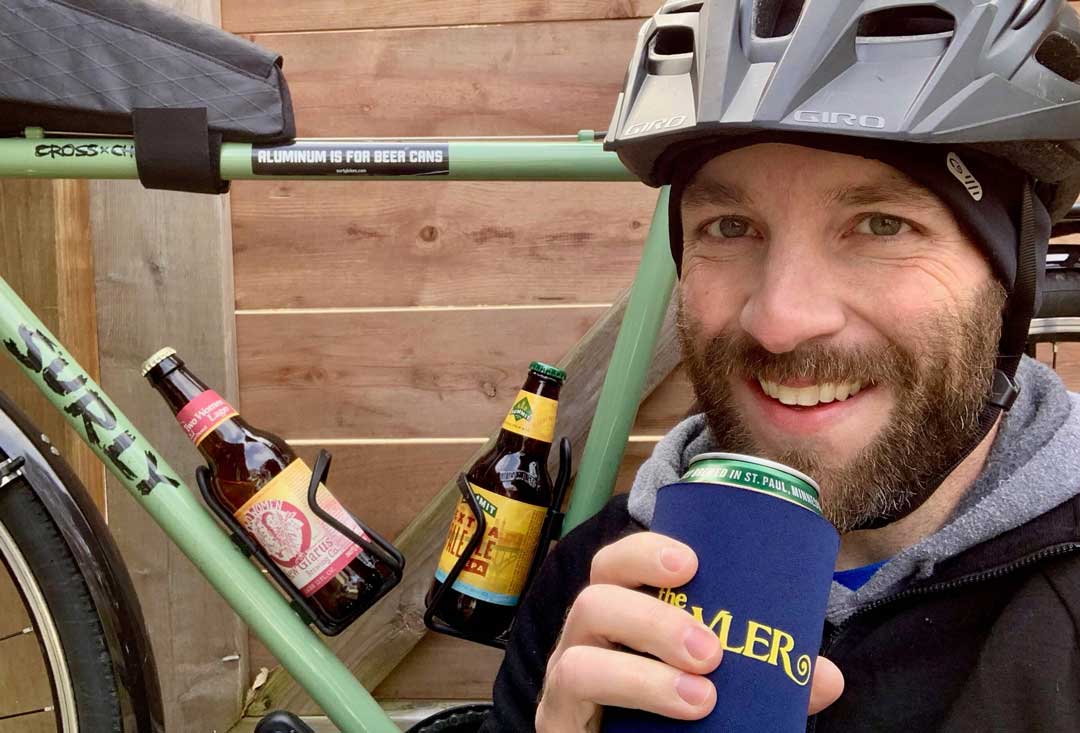