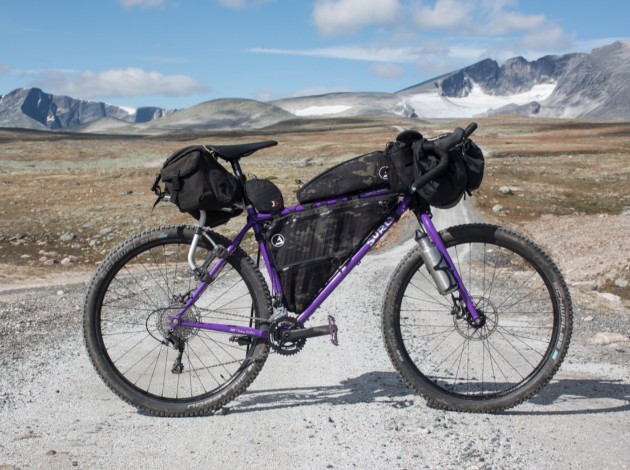 You may recall a couple of months ago we introduced you to a fellow named Jack Mac in our Humanoids of Surly segment. Jack is an adventurer from the UK and has been kind enough to take us with him on his recent bikepacking exploits throughout Norway. So sit back and enjoy the words and pictures brought to you by our pal, Jack.

Hello again it’s me...the van living, LOTR fanatical, weird, undateable, road pirate Jack Mac. So I’m back from Norway and facing an accumulation of debt that makes the Wall Street Crash look like an economic boom. So despite the costs, was Norway worth it?!!! Ohhhh Yes. I have to say that Norway has to be the closest country to a paradise I’ve ever visited. I won’t go into all the political/economic details because I don’t want to bore you and secretly I just say that to sound intelligent and have no clue, but I get the impression they’ve got it pretty figured out. The only downside as an outsider is the extremely high cost of living and my god it would be an awful location to have mechanical issues with the van...you can see where this is going. 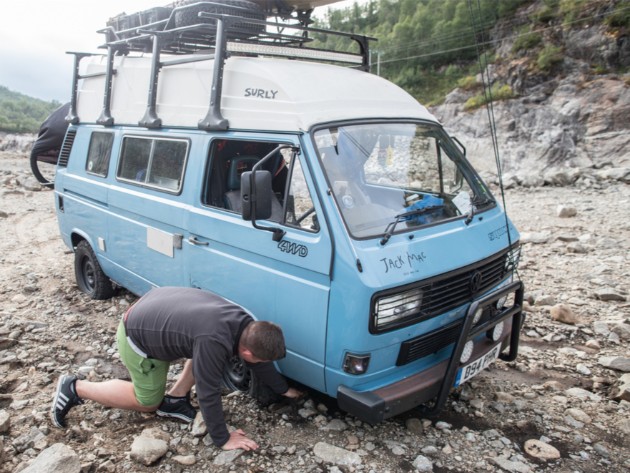 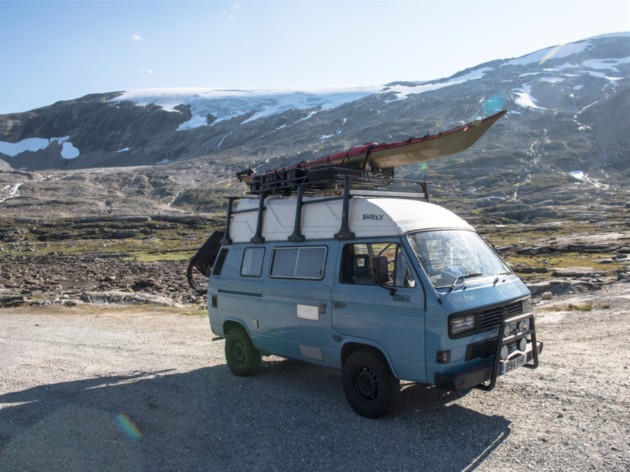 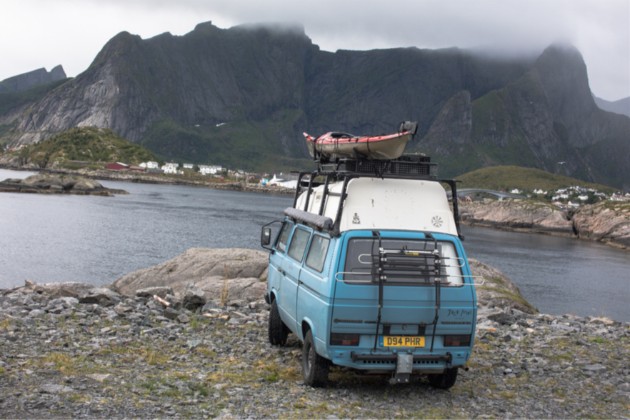 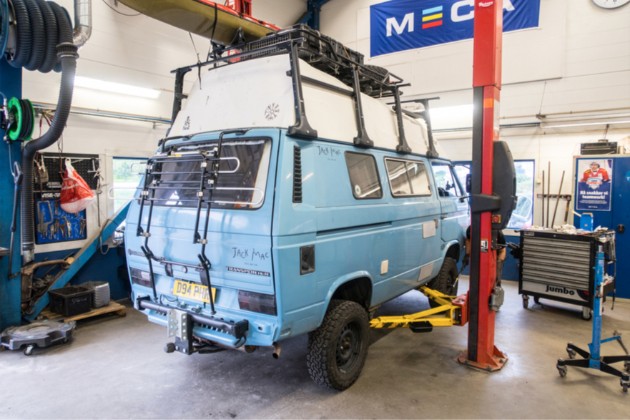 Let me tell you, if I’m ever in a room and the words ‘ CV Joint ’ are mentioned in conversation I will just to start screaming. Now, anyone who follows my blog will know I service/upgrade my Syncro consistently and there’s not much I’ve not changed, but I simply hadn’t got round to the ancient CV’s. Well, 4 out of 8 decided to break. I’m not going to dwell on the living nightmare that followed but at £150 + ( $200 ) p/h just for labour....well call me broke as s*#t. The really awful part was being stranded in various locations for almost two and a half weeks of my adventure. As a result, my original plan of rides was completely changed and instead I was forced to rethink everything. It was at this point my boiiiiii Tomasz Furmanek came to the rescue. Tomasz is best known for being a goddamn hero, but also a successful adventure photographer. Me and Tomasz had been talking about kayaking together for months but after hearing of my mechanical demons he offered to pick me up and take me to some of his favorite kayaking/bikepacking locations for some adventures ( Tomasz Furmanek is legit a saint and I highly recommend checking out his amazing work: www.furmanek.com ). Let's turn our thoughts to bikepacking Norway. 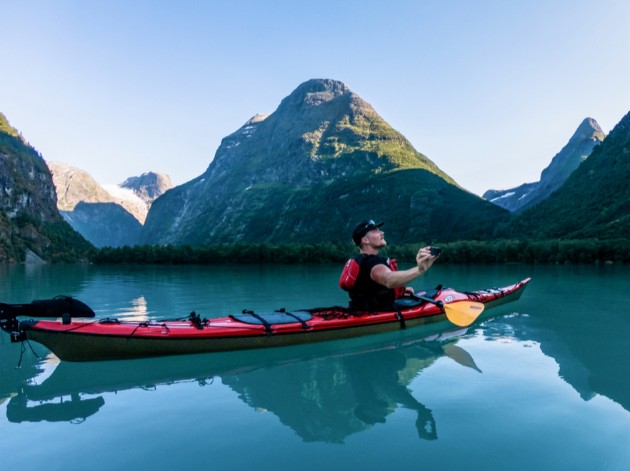 Rocky. Nope, not the hard-hitting star with an appetite for comebacks, I’m talking about big ass, jagged, pedal crunchers in their bajillions. This is not the case for the entire country and in the flat wooded areas you’re provided with a network of beautiful forestry tracks/gravel roads. Furthermore, some of the more remote national parks have rudimentary tracks built during WW2 that are also perfect for mtb’ing. The bikepacker could quite comfortably formulate an exciting route that crisscrossed its way through much of the southern regions. However, if like me you want to escape to the mountains and traverse remote singletrack that leaves your knees screaming for artificial replacement and a heart rate faster than Joey Jordisons double bass pedal then you may find things a little more challenging. 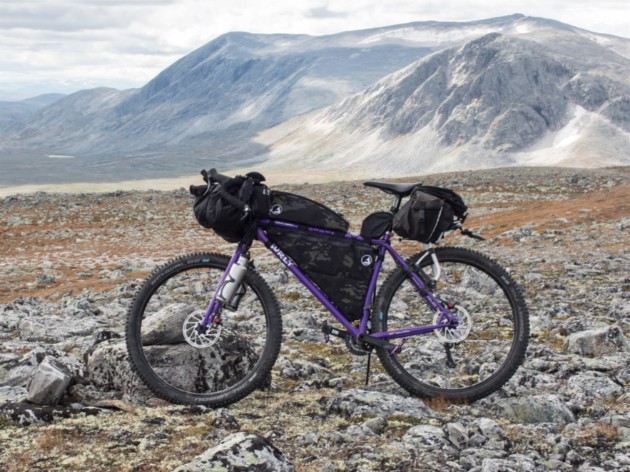 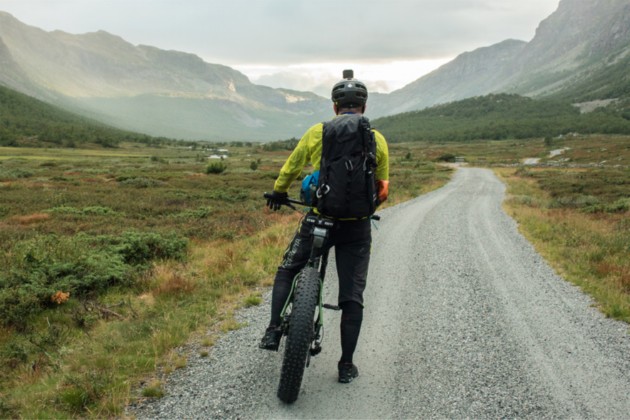 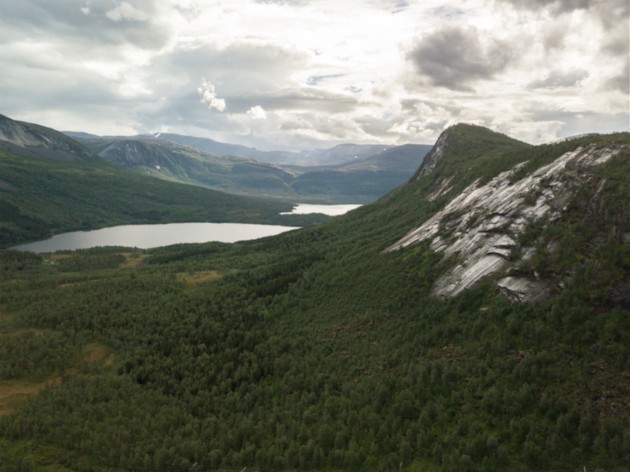 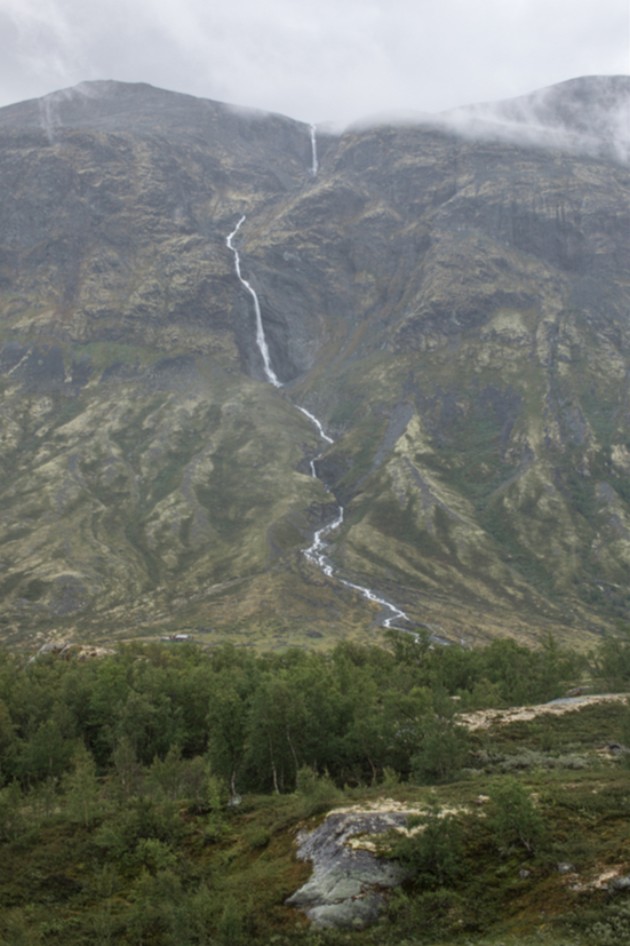 It’s such a tease with some of the most beautiful and unique mountain ranges in the world, but the reality is that for the most part ( particularly in the north ) you’re going to be hike-a-biking perhaps more often than riding. I utilized the UT.no app ( free ), which is the definitive app for human-powered adventures in Norway and is essential for anyone planning a ride. Unfortunately, it’s all in Norwegian at present ( although an English version is in the works ), but most information on there is decipherable. In light of my mechanical demons, I focused my rides in areas spanning from Jotunheimen, Hardangervidda and Dovre National Parks ( and later on in Lofoten ). I was fortunate enough to be joined by the Norwegian guru Tomasz on the first two longer rides, which provided some of the most remote/exciting trails in Jotunheimen and Hardangervidda National Parks ( we also spent a considerable amount of time riding in Reineskarvet, which is located in the Skarvheimen Highland between the two aforementioned National Parks....I know what you’re thinking ‘ wow long words ’. Ok, I get it, you want some actual information about riding Norway...something useful...GPS information, elevation, gear recommendations, weather conditions....how to have the upper hand in a one-to-one fight with a Wolverine...I got your back. However, best to prioritize the important stuff. 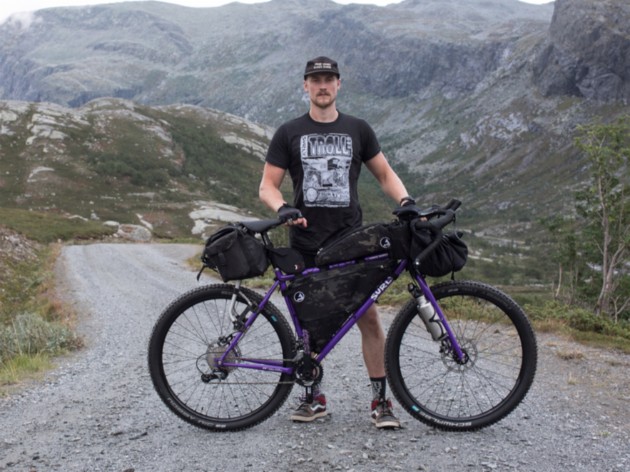 Norway is home to the Wolverine, it’s like a badger had a cub with a Grizzly, then after years of a high protein diet was shipped off to military school where young...Bizzly ( badger....grizzly...it was the best I could do ) started hitting the steroids, pumping iron and doing hard time in Askaban. The Wolverine is also known as the Skunk bear ( probably after years of dealing....) or Quickhatch...but on the streets is simply known as the ‘ sharp-toothed, demon-eyed, iron clawed, face ripping, 300kg one rep maxxing, dream incepting son of satan ’. Well, now I’ve got your attention I’m guessing you’re thinking.... ‘ I was so fed up of Jack’s tangents but I’m desperate to know how to defend myself against this four-legged devil ’. Well, don’t worry, they’re super solitary, shy and won’t cause you any issues at all. Enjoy Bikepacking Norway. 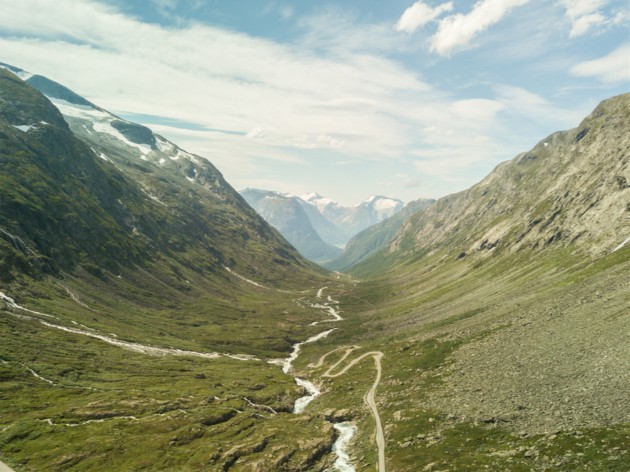 The following is a list of general ponderings that may offer some sort of vague guidance on how to prepare for bikepacking Norway, whilst also offering a snappy title that grabs the reader’s attention 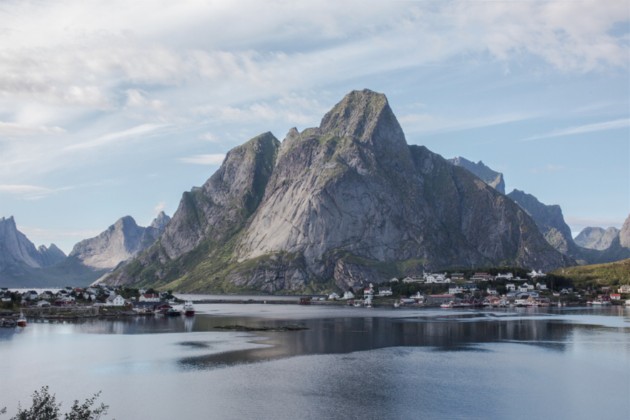 1.) If you’re planning remote mountain singletrack ensure you pack light. Some of the routes I explored required 20km + of hike-a-biking. Alternatively, start powerlifting, get more swole than a rhino and pad your frame bag out with 25kg plates. Tank. 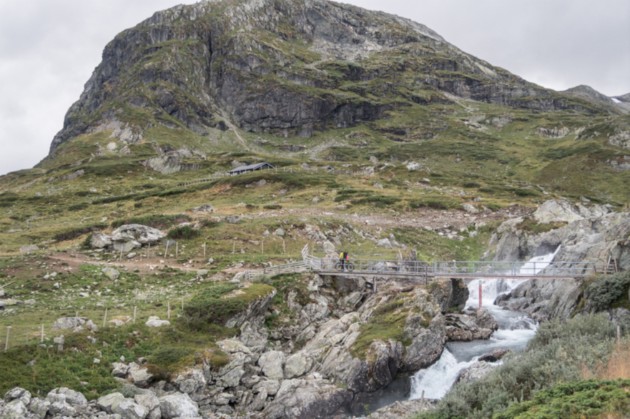 2.) Perhaps a little contradictory to the previous point, but take more food than you think you require ( if possible carry as much food from home as prices are extortionate... The harsh conditions and strenuous nature of singletrack meant we burnt through calories super fast ( I didn’t take a stove and stuck to dry food, which saved space/weight for extra provisions....like a selection of kettlebells ). 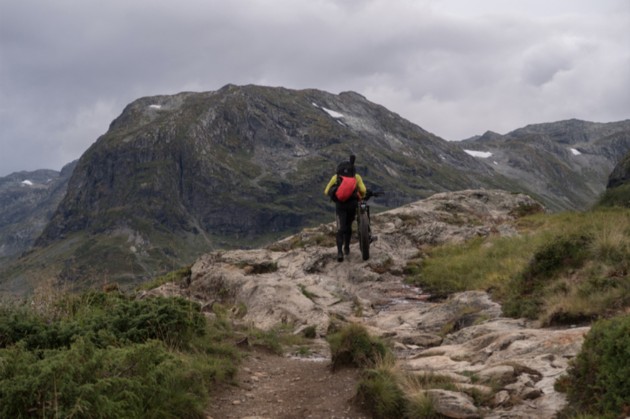 3.) Don’t be a helmet, wear one. Norway is basically just a sh*t tonne of rocks so I think it’s honestly really dangerous not to wear one in the mountains. 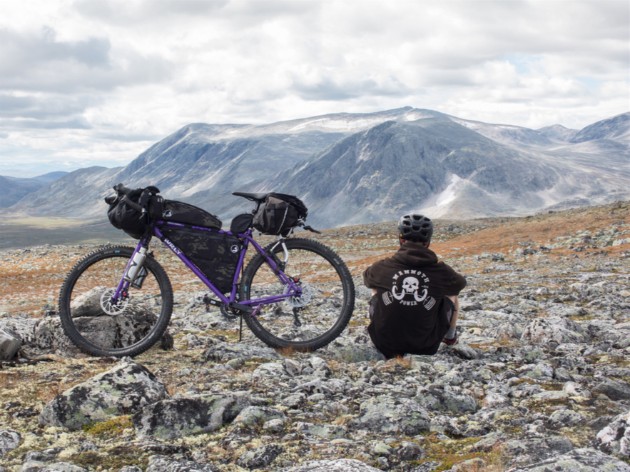 4.) Rocks again I’m afraid. Due to most of Norway being under snow for much of the year it’s very prone to landslides/falling rocks in the warmer months. Always ensure you camp a safe distance from cliffs/mountains. 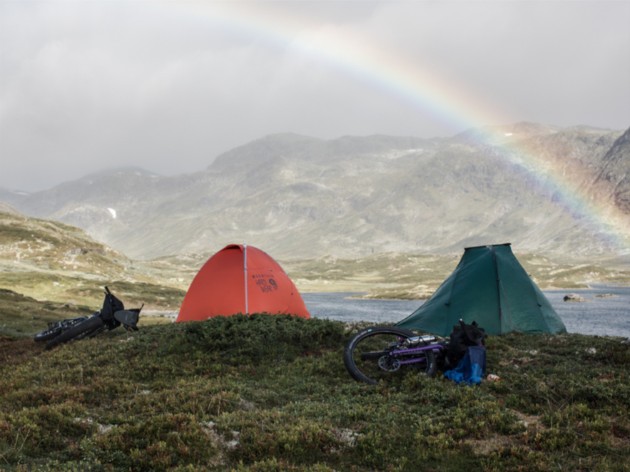 5.) I was running the Schwalbe 29 x 2.3 Nobby Nics on the KM and they were absolutely superb ( The Schwalbes took a stupid beating and didn’t concede a single puncture ). However, I think due to the trail conditions in the mountains I’d op for the 3” Knards from my ECR for a more forgiving ride next time ( even if hitting 40mph on the gravel was great fun! ) N.B. I have to say that the Surly Rabbit Hole rim and 3” Knard set up is my favorite of all time. 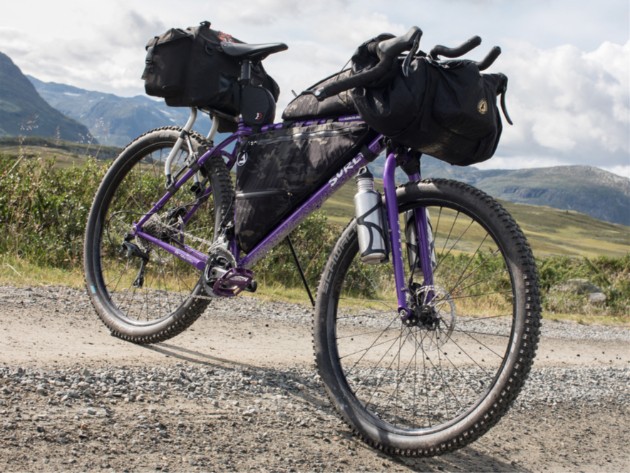 6.) In terms of bikepacking set-up. I would suggest the most compact/streamline rig with as little dangle as possible for hike-a-biking ( for a full break down of my kit head over to my website ). 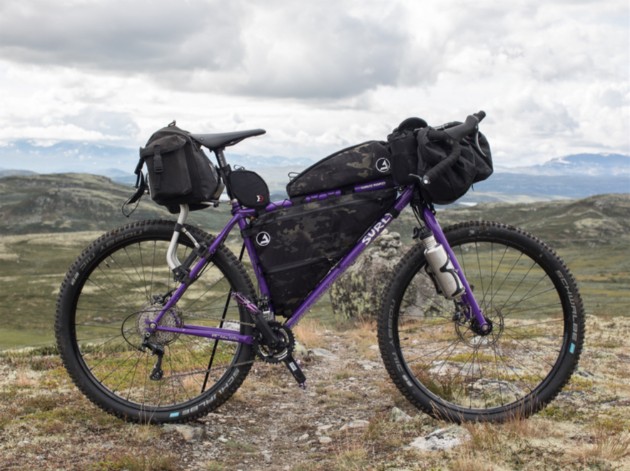 7.) Shoes. I generally bikepack with flat pedals ( the ISSI Stomp to be exact ) and a pair of high top vans....#professional. The Stomps were absolutely superb, but In retrospect I’d have worn some sturdier footwear for the trails ( for example the new breed of hiking trainers that are very popular these days ) as I had a few sharp rocks go through my sole and rolled my ankle a couple of times....or go barefoot and change your name to Odysseus. 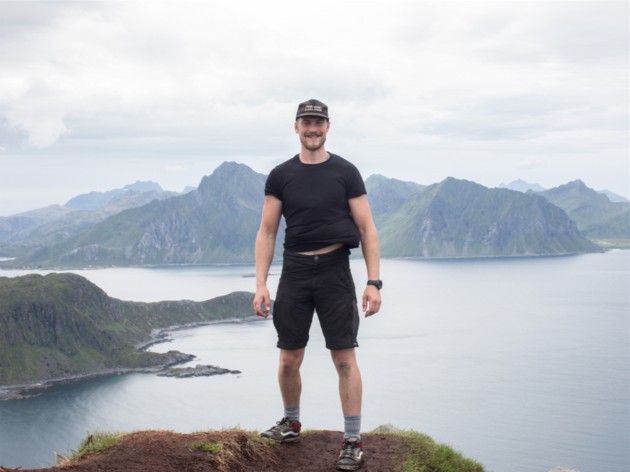 8.) The UT.no app is arguably one of the best options you have for formulating routes, but it’s not ideal being exclusively in Norwegian. It would be well worth familiarising yourself with the map beforehand and be warned that ‘ hiking routes ’ will require a lot of carrying. 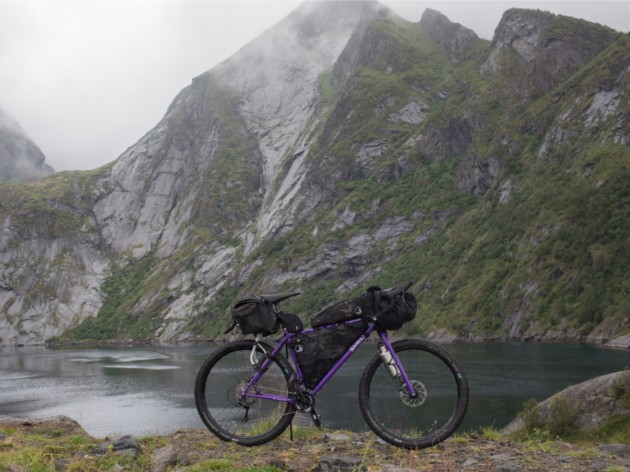 Lord of the Rings: A huge metaphor that teaches life starts outside of your comfort zone.
Surly Bikes: Not to be trusted with the ring of power.
Norway: Bikepacking Valhalla.