I moved from Arkansas to Minnesota on January 15, 2019. This was swiftly followed by a series of Polar Vortex sucker punches delivered straight to my delicate Southern disposition.

Knowing that I faced a long, dark, cold winter, I had two paths before me:

I could cower indoors with a Snuggie, some warm Yoo-hoo, and nine seasons of Family Matters reruns (tempting). Or I could spend time outdoors, experience a “real” winter, and try to make the most of it.

For about nine seconds, I pondered how I would make the most of the snow, ice, and temperatures that had Minnesota meteorologists saying, “what the hell is this?”

Then I decided a fat bike was in order. 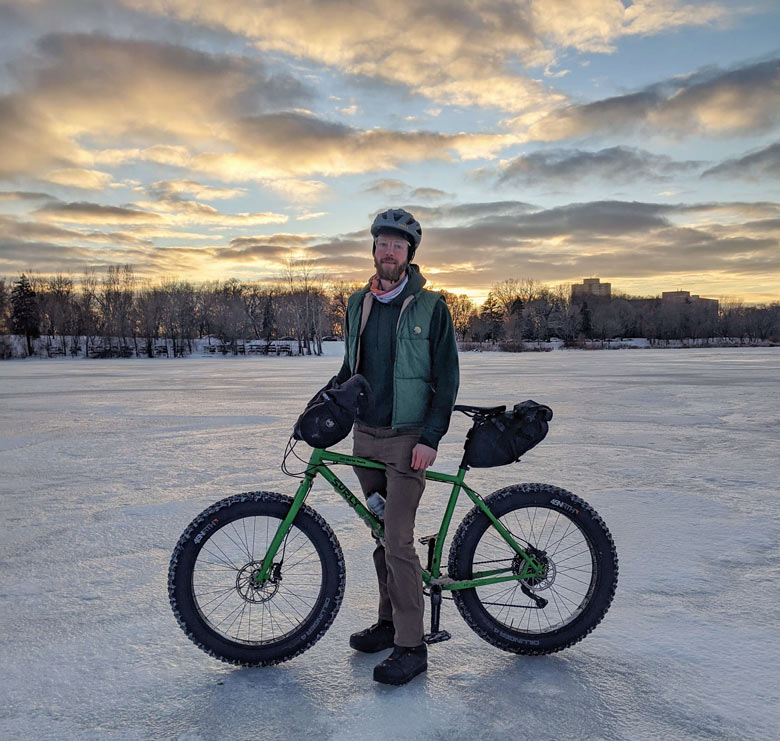 I’ve been enamored with Surly’s fat-tired creations for as long as I’ve known about them. I admit that part of their appeal is the absurd je ne sais quoi of comically-large tires and bright colors—they’re the bicycle equivalent of driving a dune buggy to the grocery store. My first fat bike ride took place a few years ago on my friend Jason’s Ice Cream Truck. He had purchased it to ride in winter ultras like the Susitna 100, Iditarod Trail Invitational, and Fat Pursuit. I only took it for a quick spin around a hot parking lot, but the sight, sound, and ride of its humongous tires made me feel even more invincible than I normally do, and I wanted one. 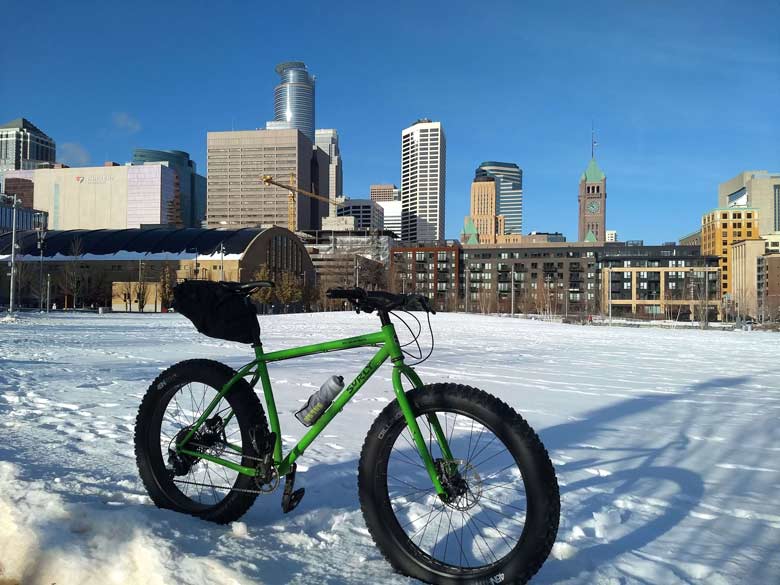 Living in snow-starved Arkansas, however, made fat bikes more of a novelty than a necessity and I had considerable trouble justifying one at the time. Needless to say, when I moved to Minnesota, a fat bike was pretty high on my “Stuff to Buy Now That I Live in Minnesota” list.

But which one? The Ice Cream Truck checked most of my boxes. Steel? ‘Natch. Undisputed champion of the tire-clearance arms race? Check. Adventure Nipples all over the frame and fork for mounting whatever I please? Yes. A color reminiscent of Hi-C Ecto-Cooler? Affirmative. The deal was done.

I took it out for the maiden voyage right after a fresh snow. Even as a fat bike rookie, I knew that riding in powder required low tire pressures, but getting there took a good half-hour of riding, tipping over, releasing air, squeezing the tire very scientifically with my hand to check the pressure, then riding some more. The revelation came when I hit the hallowed low-single-digit PSI level. I pedaled; the wheels turned; those beautiful, black-magic tires did their thing; and I just...went forward. Like a damn John Deere. 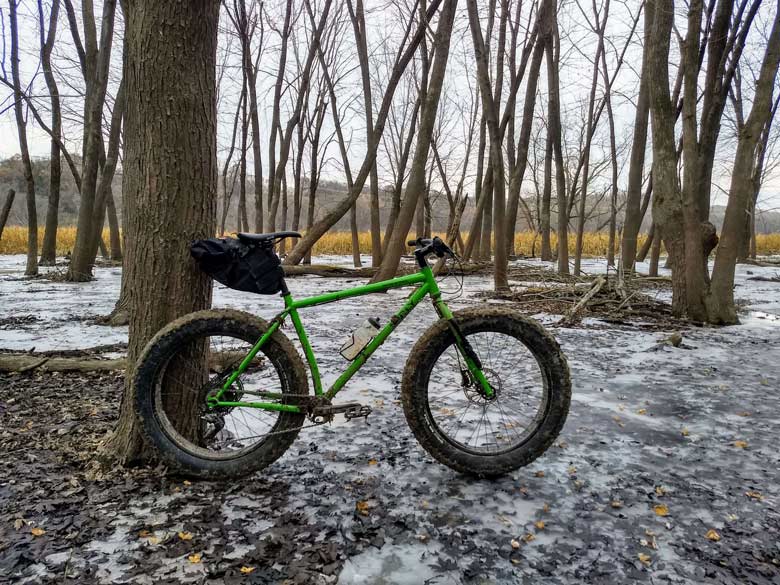 My newfound capabilities made it possible to bike to work and beyond on snowy days, providing the exercise my feeble body and mind craved in the darkest days of winter. It was a totally new experience for me and it opened up a world of winter possibilities I had never considered. Zooming around groomed singletrack? Riding on frozen lakes? Sessioning a snow ramp I built in my yard? Yes.

This sparkly green thing transformed my first few months in the North Star State from “I’ll buy my Pizza Rolls in bulk so I don’t have to go to the store for the rest of the winter” to “I went outside and enjoyed it even though my left eyelid froze shut for a minute.” In short, it taught me how to winter. 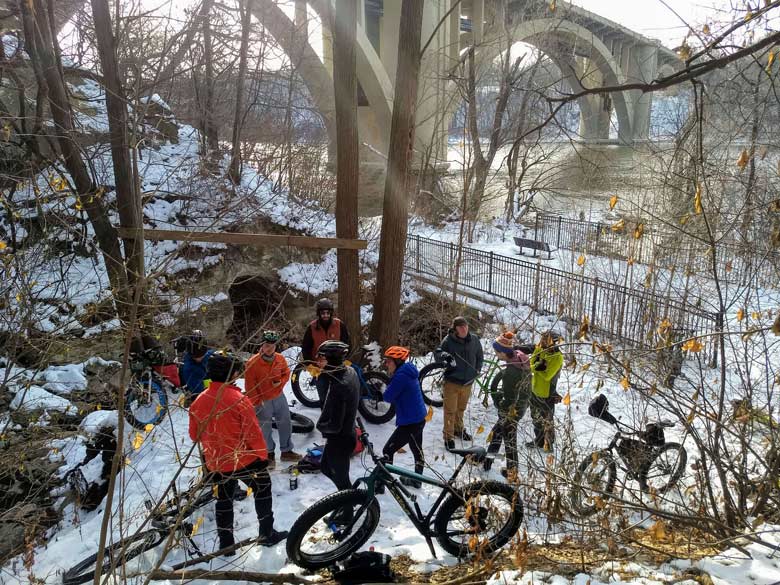 Fast forward to a year later, and our misadventures have gone well beyond my original vision. It stayed in my summer bike rotation for off-piste adventures or just to break up the skinny-tired monotony. I monster-trucked it through mud bogs; party-paced it to sandy beach hangouts; and piloted it to many, many food and malted beverage stops. I’ve pointed this bike at a lot of things and always found myself on the other side with a stupid grin on my face, and I plan to keep it up until my untimely demise. Here’s to living large. 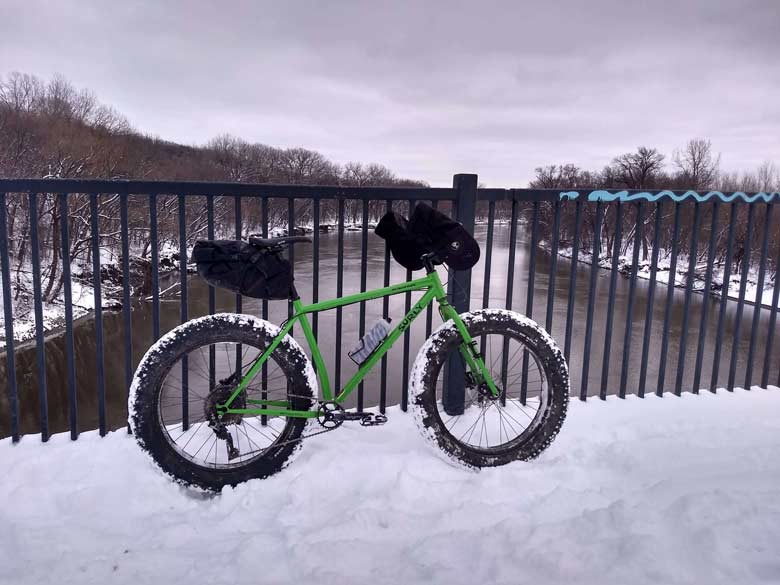