If there’s one thing we here at Surly love more than the bikes we make, it’s arguing about the bikes we make.  There are a scant few things that live above the constant banter and one of those is the belief that the Krampus rules.  It’s one of our most beloved bikes and I’m happy to announce that it’s gotten significantly spiffed up for 2017.  The new bike is coming in to stock now and this seems like a great time to talk about the new bike, why we made the updates we made, and what they mean to you as a customer and rider.  These changes are best put in context with some history of the bike so we'll compare the new bike’s features to each iteration of the frame so you can stack it up to the Krampus you might already own or whatever else you might have kickin’ around in that noggin of yours.  I’ll throw four bikes into the mix:

***A comment here would be prudent - All of the bikes shown were a part of the development process and have been used as test mules for several builds.  Being all scrapped together way before final parts spec for the complete bikes were finalized, they might have weird colors and or have weird parts on them.  They are certainly beat up and have features that were never really meant for public consumption, but shed some light on the development process.  I’ll do my best to call out what’s special or noteworthy.***

Let’s start with a little history.  The year was 2012, and I came to Surly stinking of sawdust and good intentions.  New to the bike industry and office jobs in general, I was soaking up as much as I could as quickly as possible.  Adam and Thor had been working on a project which, to me, didn’t make much sense.  A 3” wide 29” tire-d bike?  Sounds kinda dumb, I thought to myself as I desperately struggled to learn Solidworks quickly enough to be productive.  One day soon thereafter a beautiful blue prototype showed up at my desk and quickly changed my mind about weird bikes.  I sold my personal 29” bike and started to understand that knowing what I like and liking what I know aren’t the same thing: 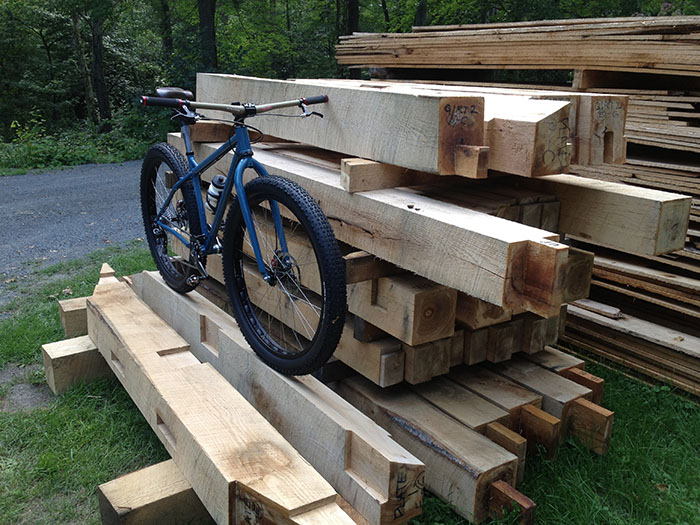 It’s been five years since that summer.  A lot has changed in the bike world, but even this original prototype is still an excellent ride.  The updates to the 2017 model make this great bike ride better, fit modern parts, and cheaper!

Please keep in mind that we made these changes carefully to keep them as inclusive for modern parts as possible while keeping as much old school parts compatibility as possible. We all love the new stuff, but most of us have bills to pay and let’s face it, we’re all parts hoarders deep down.  Building up a bike with the stuff you’ve squirreled away has a certain satisfaction that is rare in today’s world and we’re not about to take that away from anyone we want as a customer.  Keep reading to find out how the changes will affect your part compatibilities and what workarounds you have to keep using your old parts

Let's get into the changes we made to the new Krampus frame in no particular order, each highlighted below: 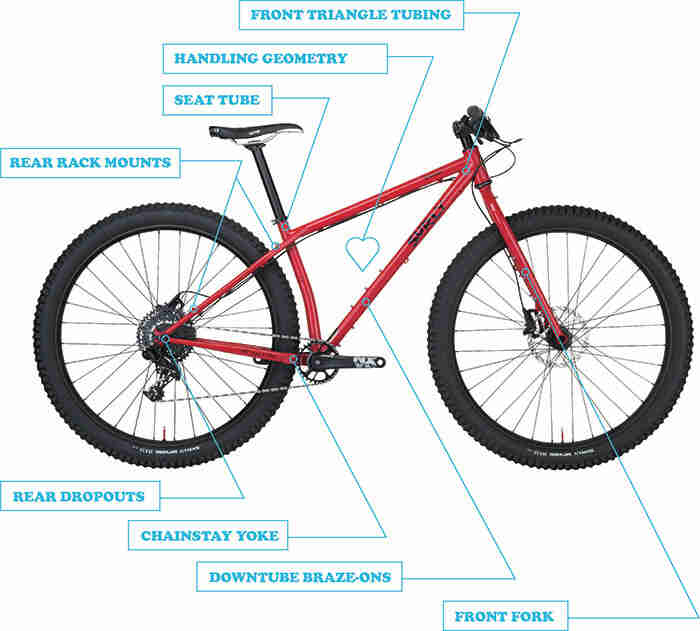 HANDLING GEOMETRY- We updated the Krampus geometry similarly to our other recent trail bikes:

This means a longer reach to work well with shorter stems, shorter chainstays, slightly slacker head tube angle, shorter seat tubes, and longer suspension fork capability.  These updates all work together to make the new bike more balanced and neutral handling.  29+ wheels have many benefits but are big and heavy compared to smaller wheel sizes.  A well designed frame helps you get all the benefits of 29+ while minimizing the drawbacks.

REAR DROPOUTS – Our one-piece cast Wednesday dropout has replaced the previous modular dropout system (MDS).  Like all things, our MDS system had advantages and drawbacks depending on how you use your bike, but two things are fact no matter who you are:  The system was expensive, had subtle complexities, and we had trouble keeping some parts available.  The new dropouts offer almost all of the MDS system’s functionality in an elegant package that eliminates the need to order and swap out chips, and will save you money! 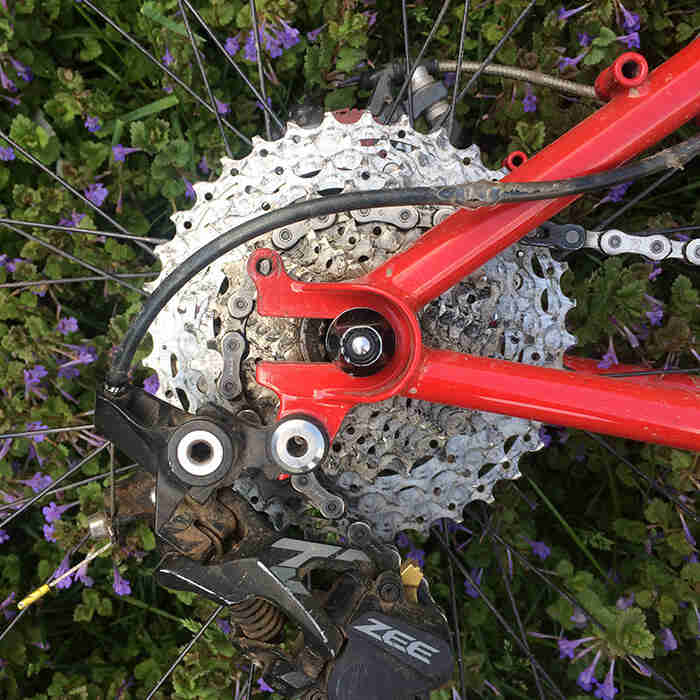 Nobody likes new standards but nobody likes bikes that ride like crap either.  Boost chainlines shorten the rear end of mountain bikes and make affordable heavy bikes ride more like lighter more expensive bikes.  We want our bikes to give you good feelings about them when they’re on the trail AND when they’re making black spots on your living room floor.  If you’re not ready to go full Boost, you can run your old hubs with the adaptor washers mentioned above.  That’s what I did. 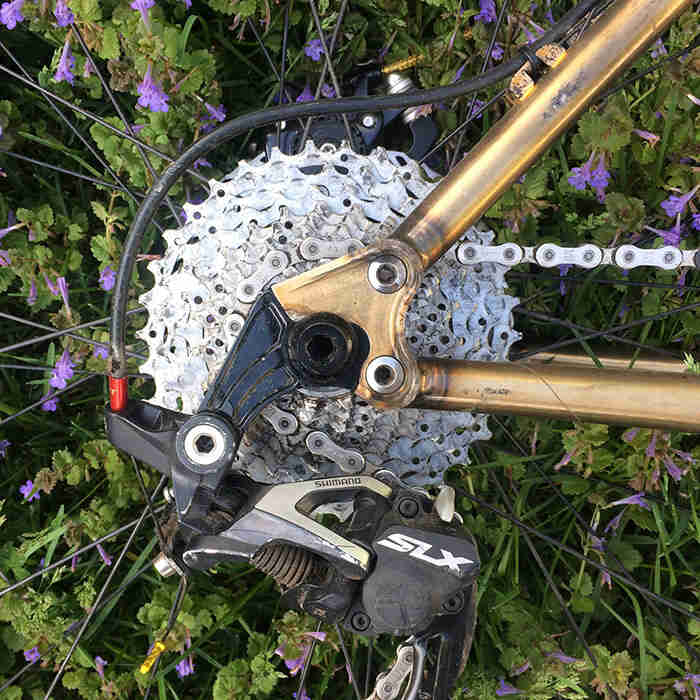 The Krampus Ops featured our MDS dropout system, which is an interchangeable dropout which features 5 different replaceable chips letting you decide between thru axle, QR, single position, single speed, or just about any combo of the four when configured for your needs. 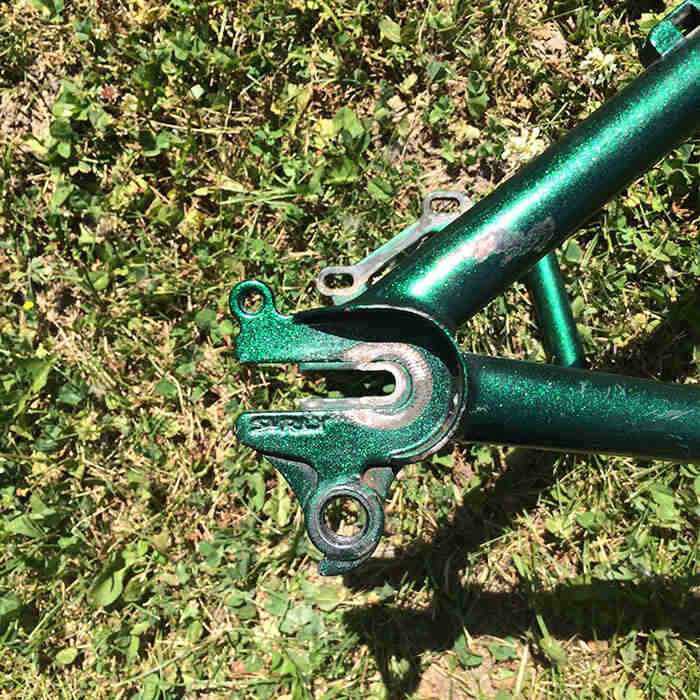 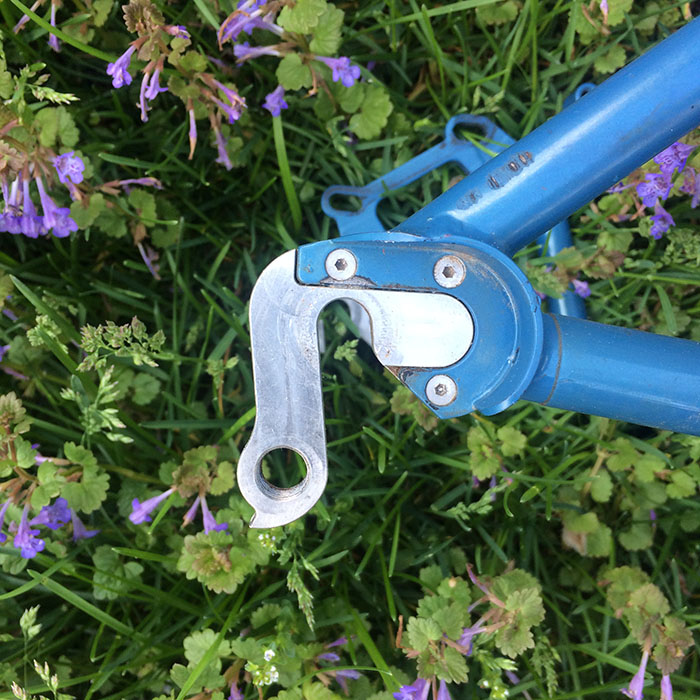 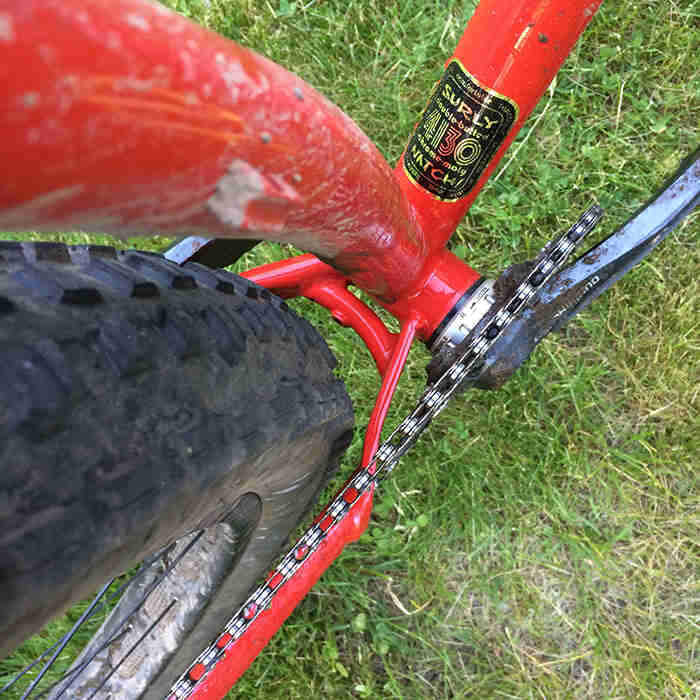 The 2017 Krampus Chainstay Plate.  The proliferation of Boost Chainlines, 1x drivetrains, weight and cost savings were the driving factors to move in this direction.  Your old crank might still fit, depending on the size chainring and chainline you are running.  My old Shimano SLX double crank fit with a  36t on the outer ring just fine. 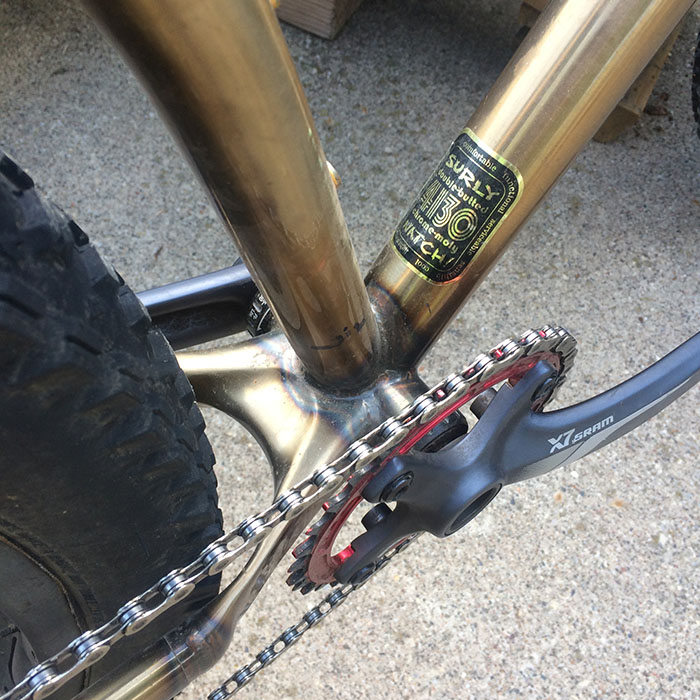 No change to the production cast yoke when the OPS model was released. 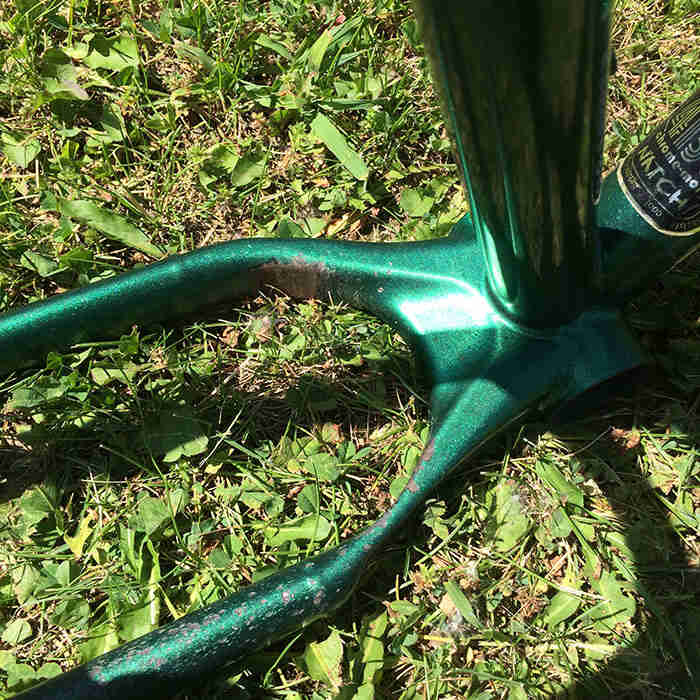 The production Krampus was the first use of this one-piece cast chainstay yoke, which was also featured on our other plus bikes of the time, the ECR and Instigator.  One of the more complex castings we’ve done to date. 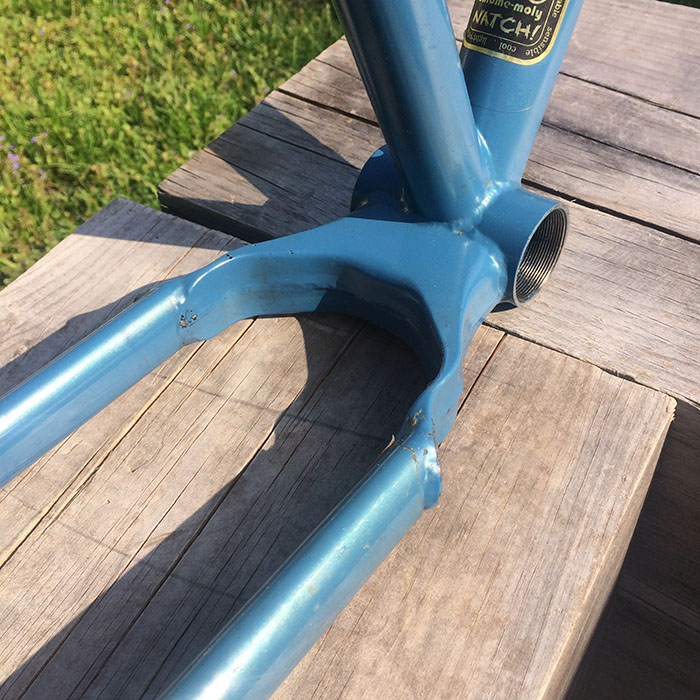 SEAT TUBE – The old 27.2mm diameter seat tube has been replaced with a 30.9mm seat tube with all the details for internal routing, the old jump brace has been removed, and it’s shorter for ease of dropper post use.  This is a no-brainer.  Seats hitting butts caused more endos last year than anything else and it doesn’t have to be that way.  A dropper post will get that seat out your business and help keep your 2017 endo-free.  If you don’t use/can’t afford a dropper, you’ll barely notice the change.  Want to use your old 27.2 post?  That’s cool.  You can shim it!  But seriously.  Save up for a dropper post and start using it! 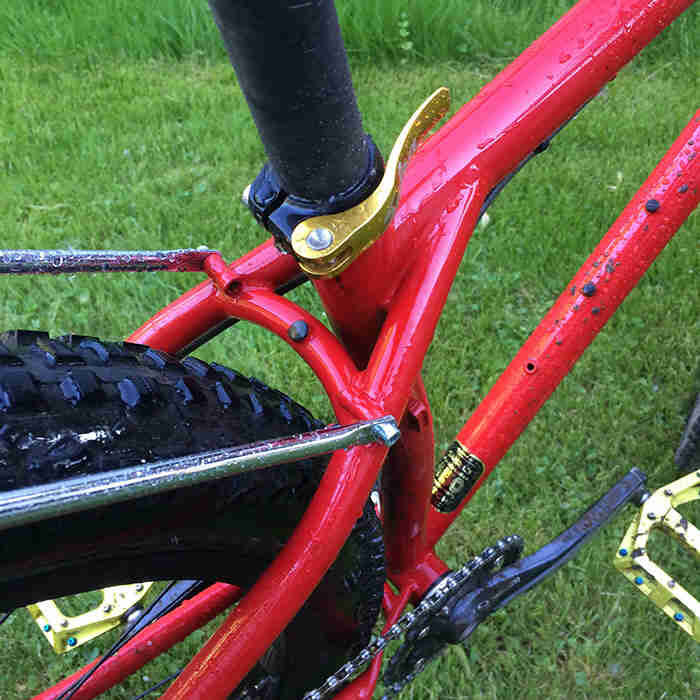 The 2017 Krampus seat tube.  Notice the 30.9mm diameter, lack of jump tube, and the rear rack mounts on the seat stays!  3 pack bosses on the top of the down tube and a pair on the bottom are now standard.  Also notice the further forward weld point of the seat stays.  Small-Medium frames weld to the top tube only, bigger frames weld to the seat tube only.  These more simple copes can be cut on a lathe vs a 3-D wire cut which saves a lot of cost. 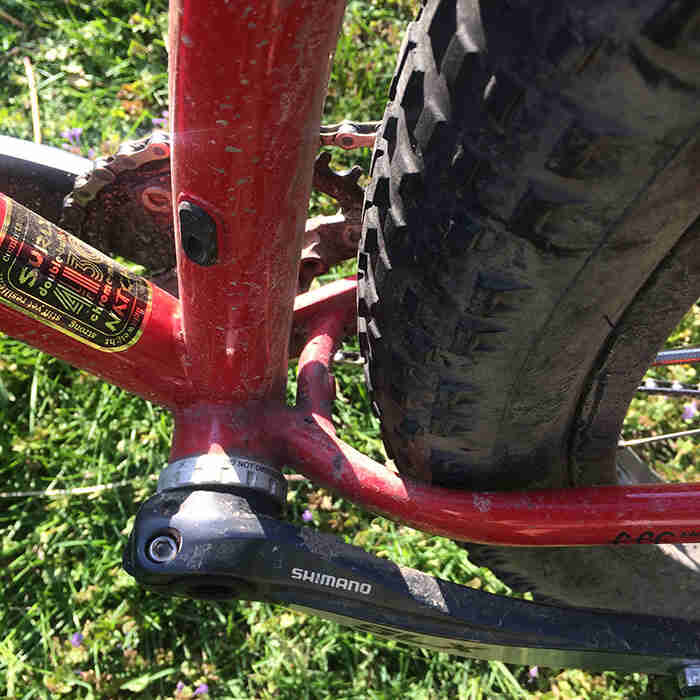 Here’s another shot of the new seat tube showing off the internal dropper routing plug: 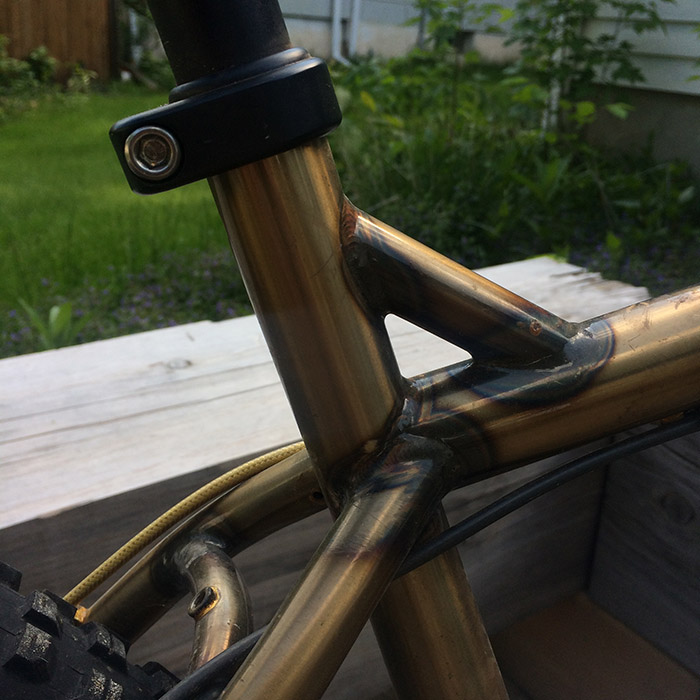 Krampus Ops seat tube.  No changes to the seat tube from the standard green model.  Still no rack mounts.  Our belief was that those who wanted a rack would want an ECR.  We’ve since decided that suspension forks and racks aren’t always mutually exclusive.  Krampus Ops still only rocked double water bottle bosses 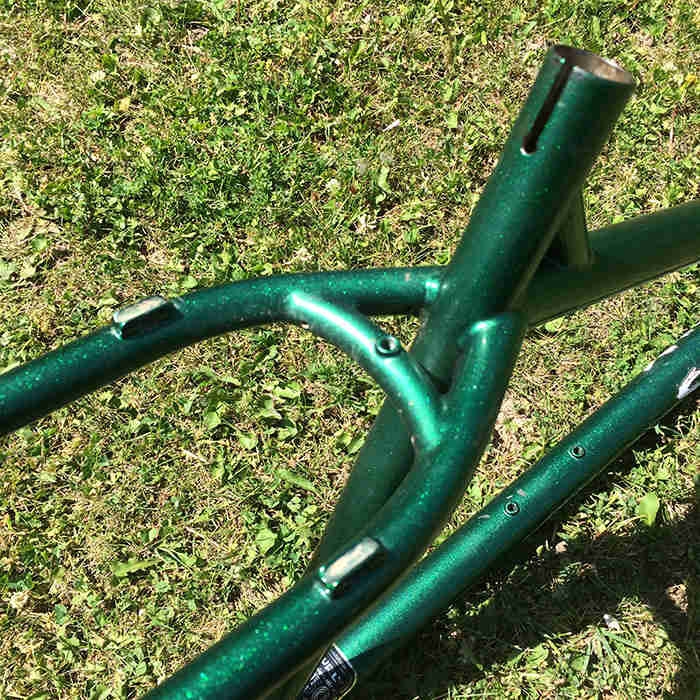 The original production Krampus used a 27.2mm seatpost with our standard jump tube of its era and no rack mounts on the seat stays.  Just a pair of bottle bosses for these years. 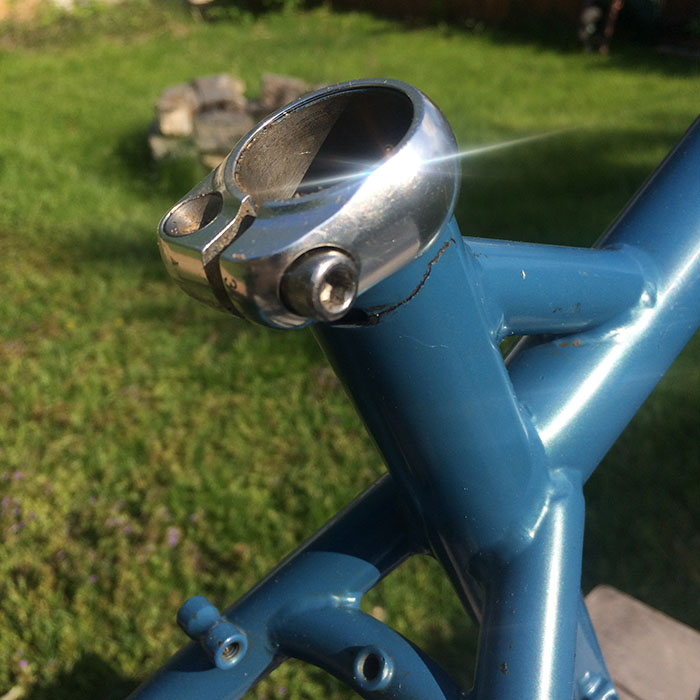 R&D prototype Krampus frame and its 27.2 seat post, jump tube, funky T-slot (which we obviously had some issues with).  Notice this proto has rack mounts

FRONT TRIANGLE TUBING – The 2017 Krampus front triangle tubing has been updated to the same flared, triple butted tubes used on the Ice Cream Truck, Instigator, and updated Karate Monkey.  The world is changing and it’s not getting less litigious.  Speeds are getting higher, suspension forks are getting longer, and bikes need to be tougher.  The new Krampus frame is not only good to go for up to a 120mm fork, it’s all nice and legal that way.  Shred with confidence.  You’re welcome. 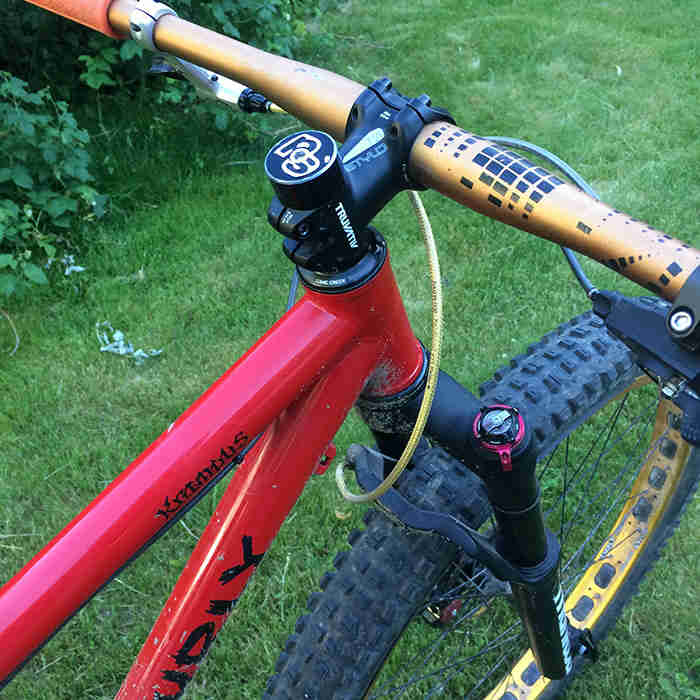 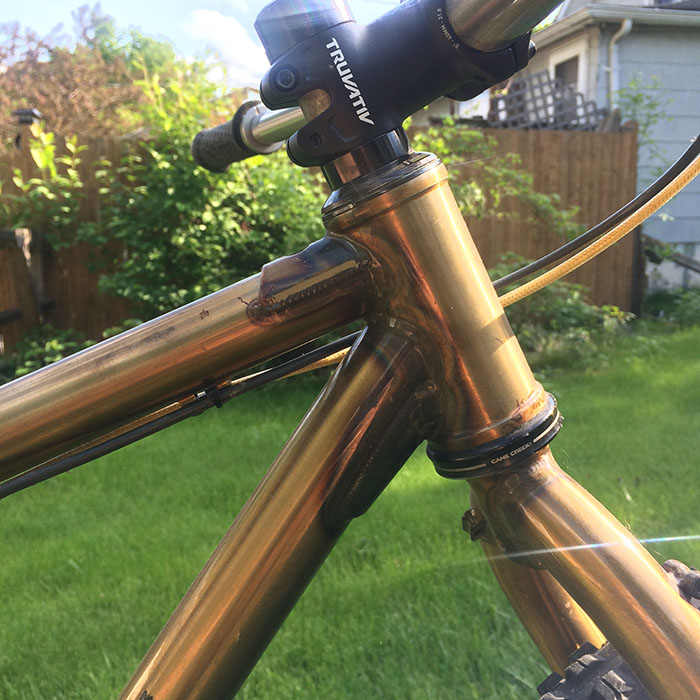 The older tube/gusset combo shown on a Gold Krampus Ops frame.  I think the gussets are charming, but a 120mm suspension fork is even better.

FRONT FORK- The 2017 Krampus sports an updated rigid fork that shares riding geometry with the old fork, but now accommodates 15mm x 110mm Boost front hubs.  The reason for this change is that all legally compliant 29+ suspension forks use 110mm Boost spacing to make room for the giant tires.  The new Krampus was designed to ride equally well with a rigid or sus fork and there’s no good reason to make someone buy a hub in addition to a spendy sus fork to make the upgrade.  Those planning to run their old wheelset might need to think hard about this step.  You can either upgrade your hub or use an older QR Krampus fork.  The new fork also features a very deluxe suite of braze ons: rack mounts, mid-blade bosses, and three pack bosses 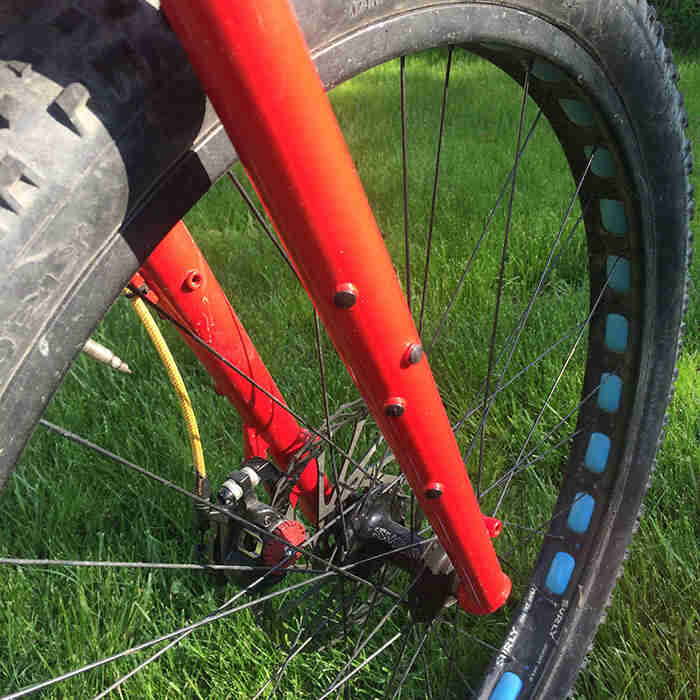 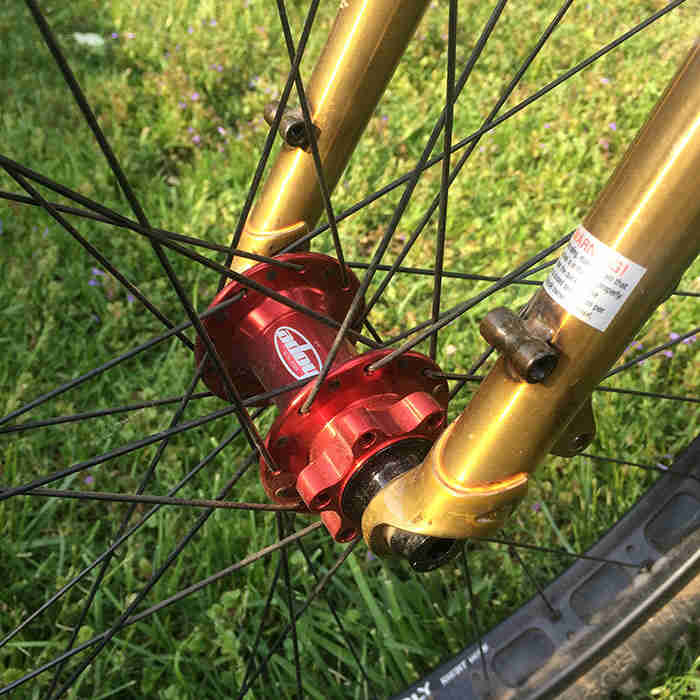 An early thru axle prototype on an MDS prototype frame.  This really cool brazed-on, cast thru axle dropout lost out to the tig welded dropout due to cost of manufacturing and weight.  Notice the rack braze-ons.  These were not included on production bikes until 2017. 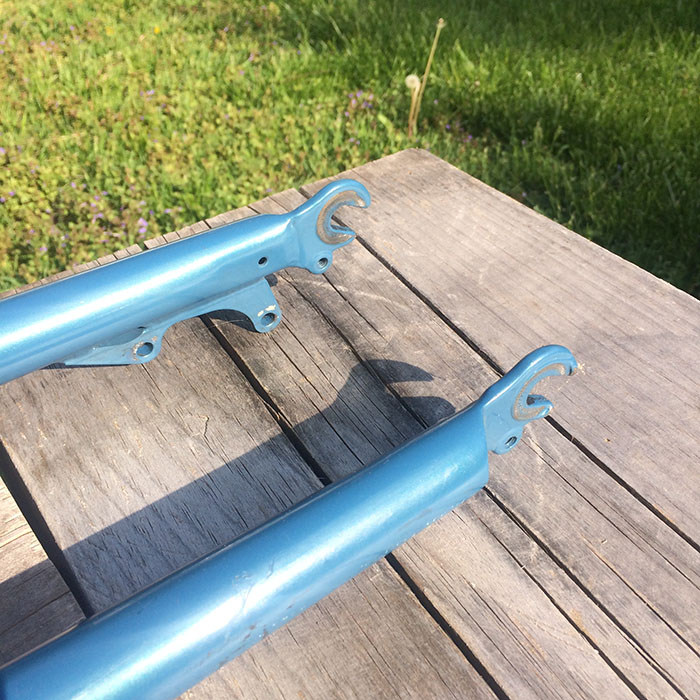 Original R&D prototype fork.  Notice the familiar 100mm spaced QR dropouts which have been standard on the production fork until now and lack of braze-ons.  This fork is a different color than a production fork but otherwise identical. 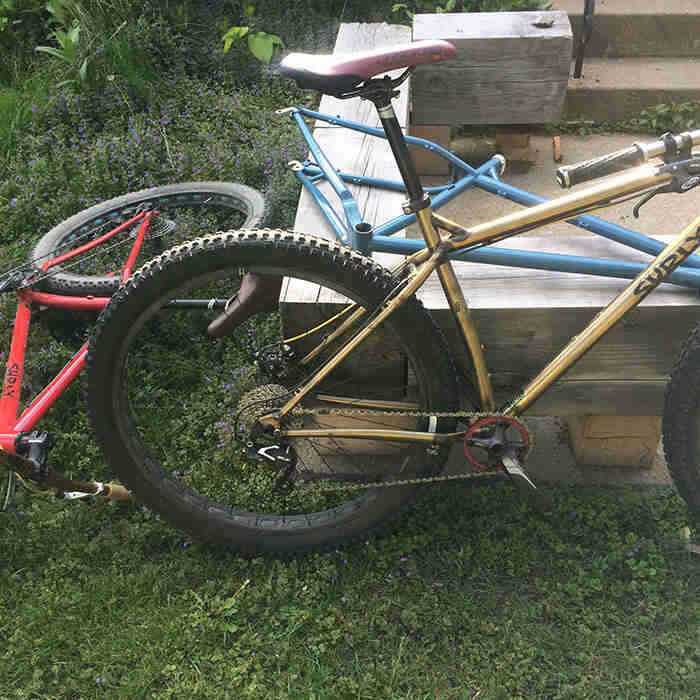 That wraps up the changes to the frameset.  These changes could be anything from a clear spring on a hot day to a barrel of fire shot down the backside of your happiness depending on how content you are with the current bike.  For those that are huffing and puffing about tubeless and new standards, there’s a few things I’d like to remind you of:

Parts have gotten a lot better in the past five years.  If you’re happy with your current bike, I implore you to stop reading bike blogs and go out and ride it.  Come back when you’re looking for something different.  We’ll just be here talkin’ bout cool new bikes til then.

We’re out to make a better bike cheaper, and that’s gonna require a little change.  The MSRP of this bike has gone DOWN over the past five years and gotten much more capable.  Still welded by the same folks, still got good (some even better) parts on it.  We’re pretty proud of that.

If you are looking into the complete bike, there are several updates to the complete spec including highlights such as tubeless ready rims and tires, thru axle wheels front and rear, and 1x drivetrain.  Take a look here to check out all the details!

If you plan to go the stubborn route like I did, stay tuned for my follow up which will highlight my process to get all my old parts to fit, what I had to procure to do so, and lessons learned. 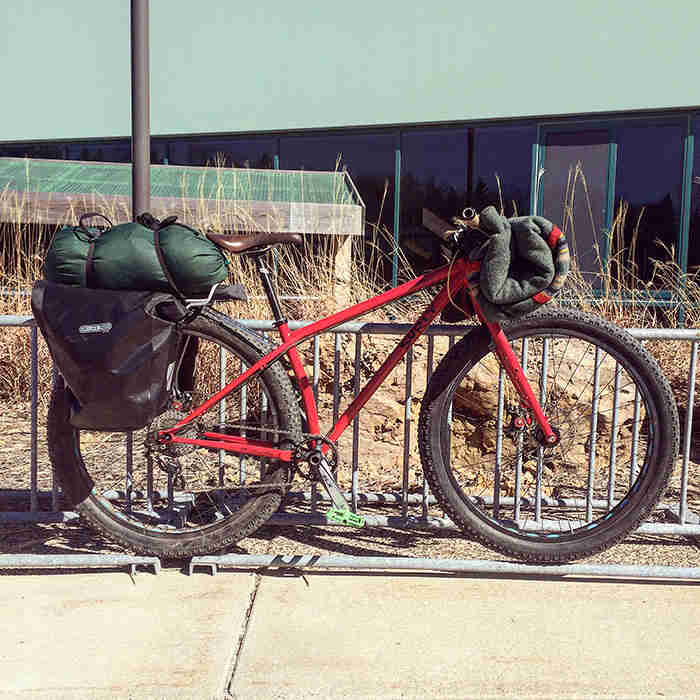 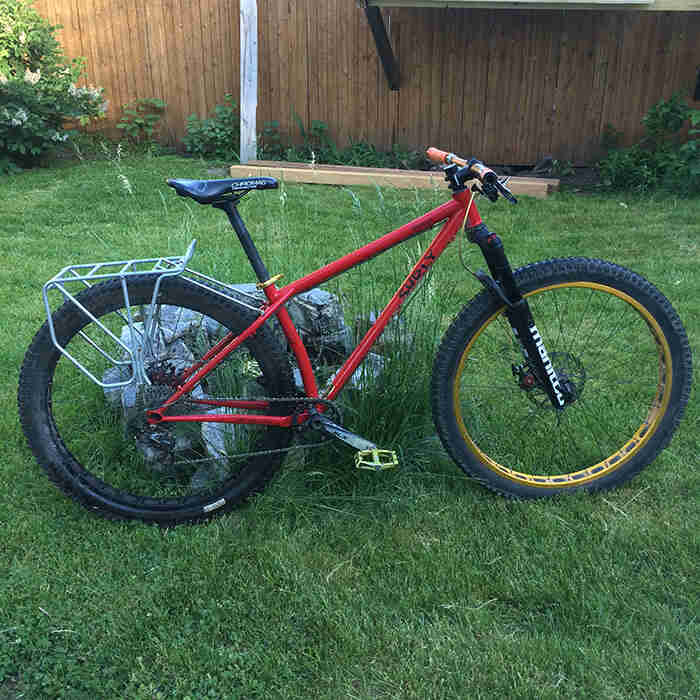 No matter what you're doing, nobody does it all day better than 29+

See you out there