Today on the Surly blog we are pleased to feature the words and images of our friend David from Barcelona, Spain. Like many of you, David has been the owner of more than a few Surly models over the years, each of which has taken him on journeys to and fro. Each also serving unique purposes on his travels. Read along as David recounts his ten Surly bikes in the past ten years:

Now that we’re all on the rack due to COVID-19, I got time for almost everything — even to remember and rekindle the most authentic bike trips I’ve been able to take. This memory exercise has made me aware of a curious coincidence: 2020 makes 10 years since I got my first Surly bicycle and, oddly enough, I’ve traveled with ten different Surlys since then.

The Pugsley was a monstrous bike back then, at least in Europe. It was my very first Surly, maybe the first mass-produced fat-bike, and together we started to explore the polar routes on the North of Finland. A bicycle able to fit all the standard components of the time. A master engineering work. The Pugsley was, without my knowing it at the time, a germ that would sprout future explorations and adventure trips. 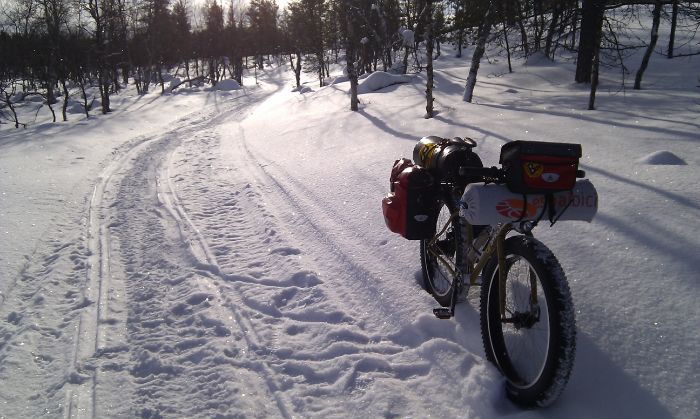 With the Moonlander we witnessed the birth of 4.8” tires — total madness that motivated us to keep going with our Lapland snow trips. Like the Pugsley, the Moonlander was very versatile being compatible with standard components. I still use it with all the original components today — except the tires, that is. Here’s the Surly Moonlander sleeping out in the open at -30ºC next to the Pugsley. 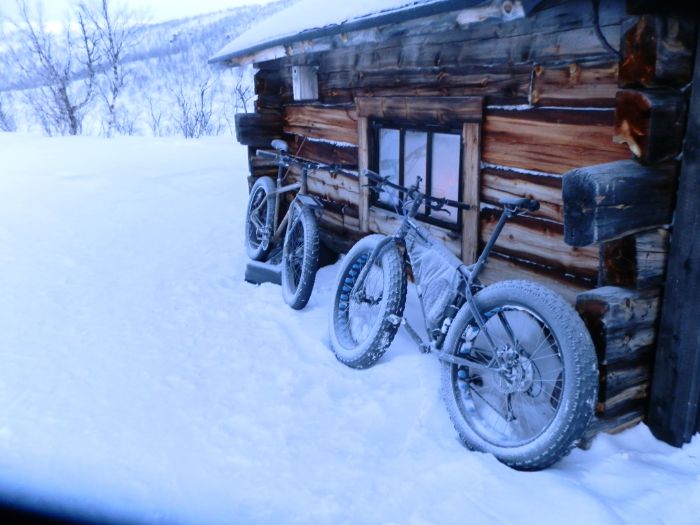 Now, those who know me already know I have a soft spot for Fat Bikes, and I love riding them in their natural habitat. In fact, five of the ten Surlys I’ve owned have been Fat Bikes: 2 Pugsleys, 1 Moonlander, 1 Ice Cream Truck and 1 Wednesday. But there’s more to Surly than just Fat Bikes.

The Surly Krampus was yet another unique contribution to the bike scene — possibly the very first 29+ bike. This tire size exists halfway between 29ers and Fat bikes. 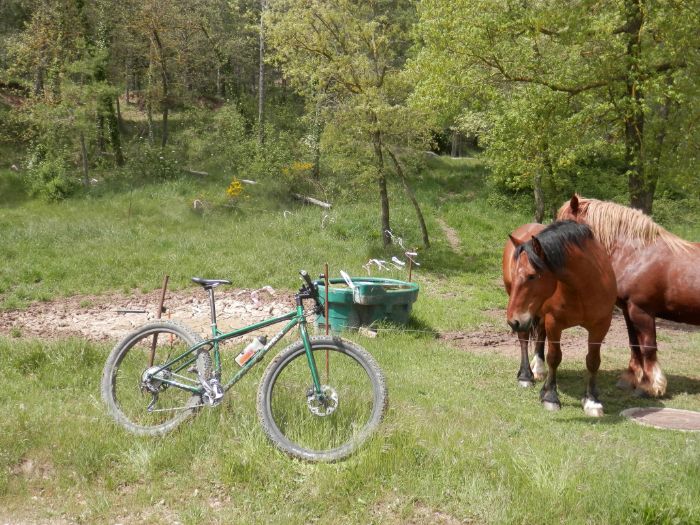 Despite its amazing potential, I have to admit I’ve explored only relatively nearby territories on the Krampus. Nevertheless, while riding the Krampus I have lost sweat and blood and heard some fine swearing. I’ve gotten myself into many messes with this bike. But to exploit its full potential, you have to be up to what it demands, and you’re not always that inspired. I look forward to pushing a little further with my future adventures.

The Surly Krampus in its natural habitat. 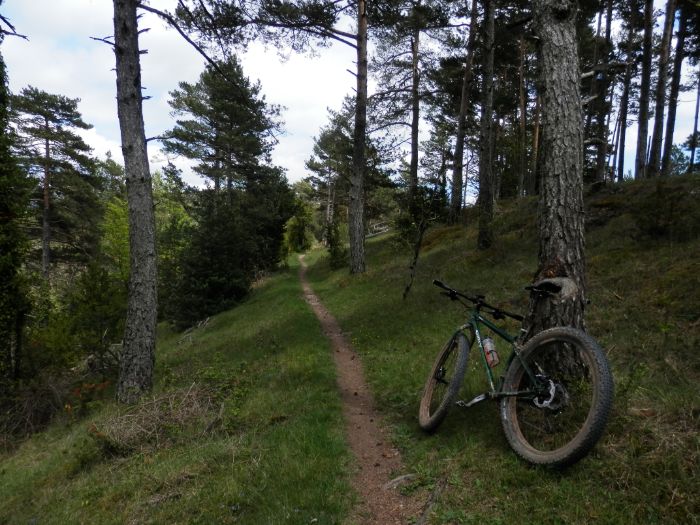 One of Surly’s MTB icons is the Karate Monkey, a bike with a predator’s soul. A bike that’s as fierce eating up miles as it is nimble on technical rides. The Karate Monkey doesn’t turn its nose up at anything, and it’s always ready for whatever you’re up to. 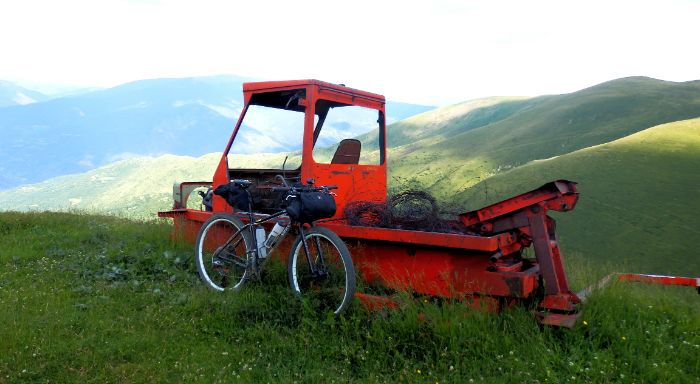 Another Pugsley, it might the one bike I’ve journeyed the farthest with. We’ve explored Southern Greenland’s remote fjords, the Mongolian flatlands, the freezing Lapland, and even the fearsome “Goat Trail” up the Wrangler/St. Elias Mountains in the South of Alaska — accompanied by its good friend the Ice Cream Truck.

Believe it or not, there are remote places where not even a Surly Pugsley can go. That’s when you have to work something out to keep moving on, or search for more favorable terrain. 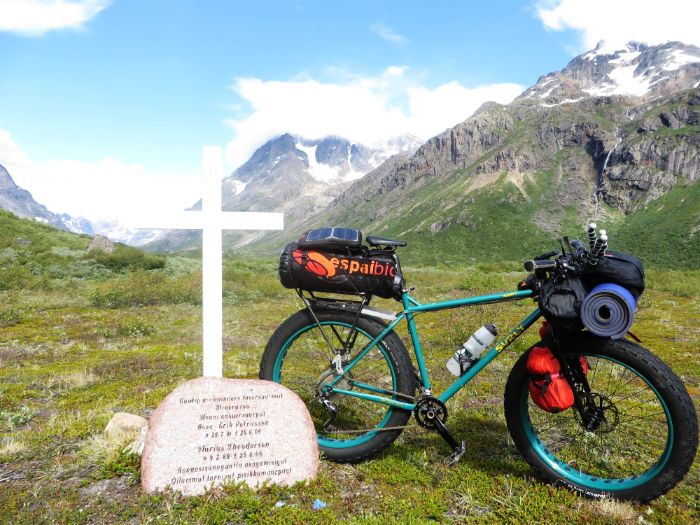 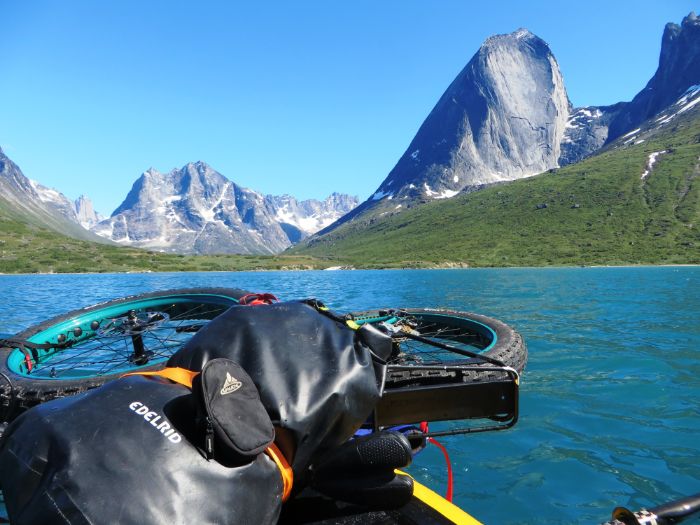 The Straggler. This bike gets you closest to the Surly fifth essence, or closer to one of their references at least, as it’s the disc version of one of their trademarks, the Cross-Check.

In theory, this bike is best on pavement and some gravel. As a city bike it is fast and nimble. But, to me, this is a bike you can expect a bit more from — or even much more.

The Straggler is perfect for getting lost in the long maze of cycling trips through the center of Europe, like the Czech Republic, Germany, or Switzerland. Whether used for bikepacking or ridden with a classic pannier setup, the Straggler is great for touring on pavement and gravel. 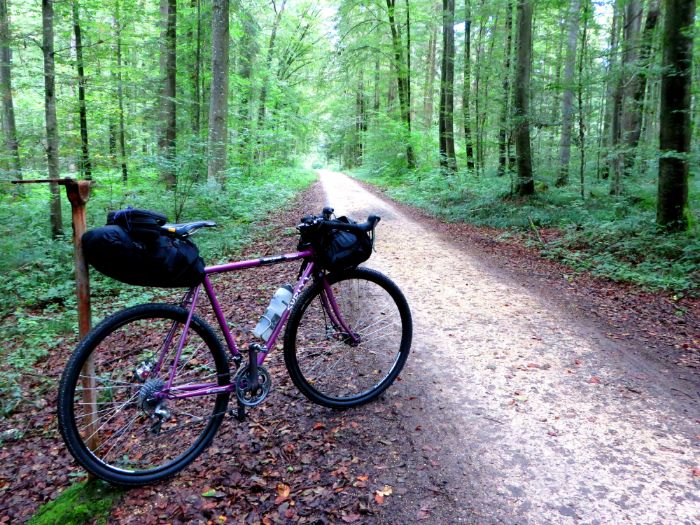 The fearsome Ice Cream Truck is an updated Fat Bike. Besides making miles of tracks in the snow, a Fat bike is incredibly useful for riding deep into desert sand or across the dry creeks of Alaska.

The Ice Cream Truck is a passport that’ll get you into (and out of) the snows of Lapland, the wild valleys of Alaska, the sandy flatlands of Mongolia, the deserts of Morocco, and more. There’s no doubt all Surlys travel well, but the Ice Cream Truck, as with all Fat Bikes, is capable of making its way in places where paths don’t even exist. 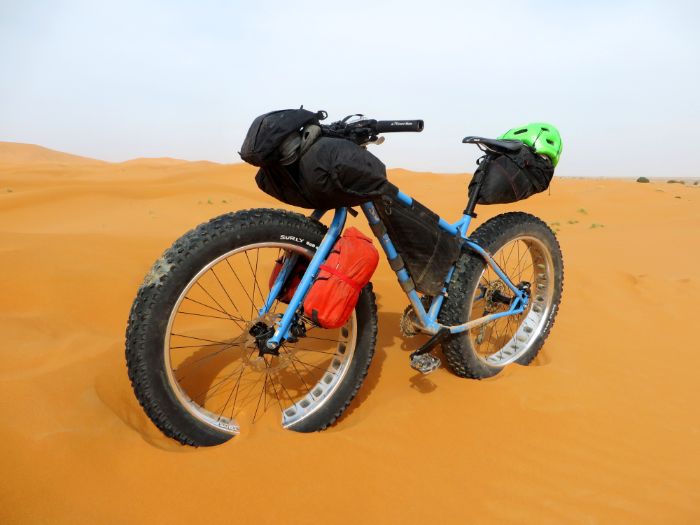 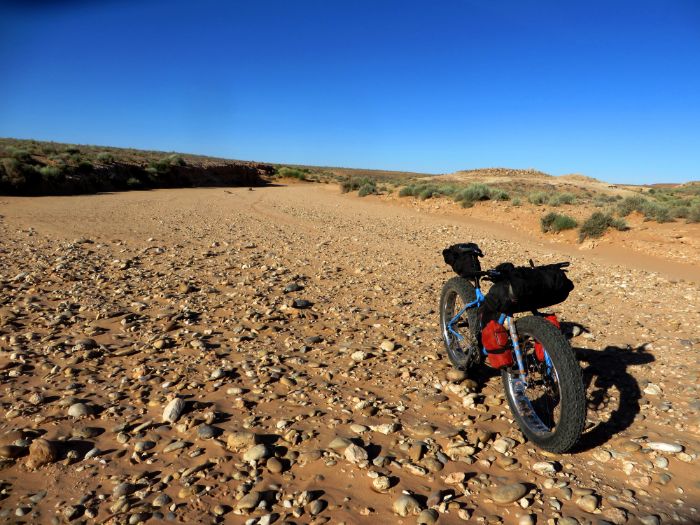 The Wednesday. What’s that? Yes, it’s yet another updated Fat bike. A frequent visitor of the Lapland’s winter snow and summer tundra. Wherever paths disappear, this bike stands out. And when it can’t go on, we take a dip!

Surly bikes put up with whatever you bring upon them and even more. From long days out in the wild to the harshness of the rivers that leave you soaked — even sunk in the rapids. 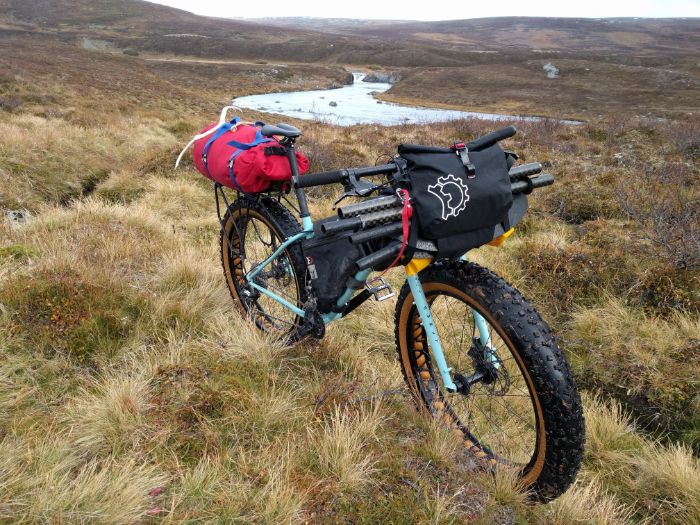 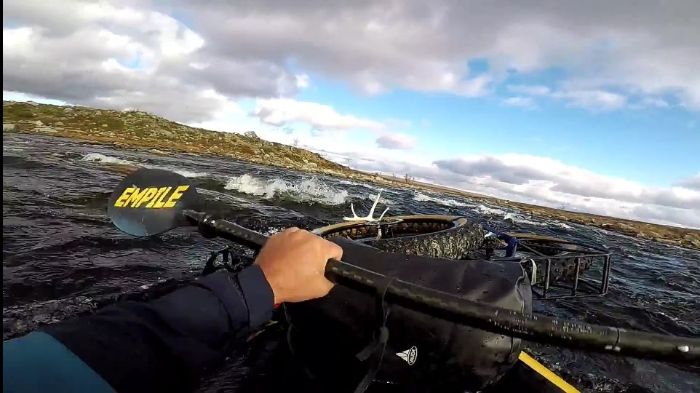 Another Karate Monkey. Following its predecessor’s soul, this one is updated for modern times.  Keeping all its racing aggressiveness while maintaining the strength necessary to face the most demanding bikepacking rides, it never loses its fierce and agile feline character. The Karate Monkey can take you far through the most hidden, most remote singletrack. 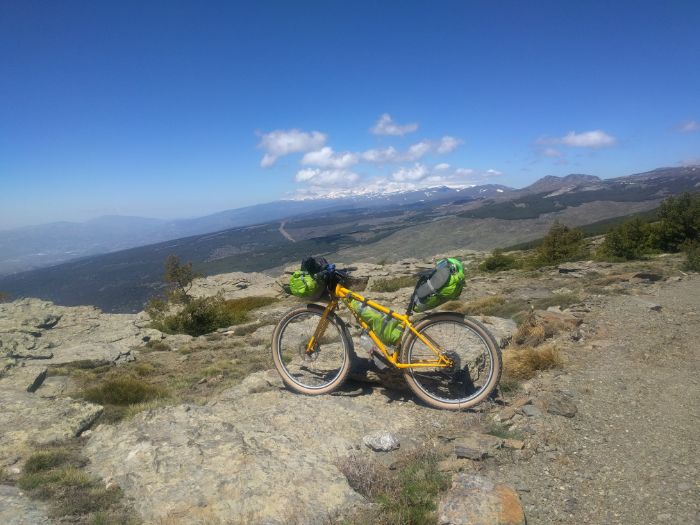 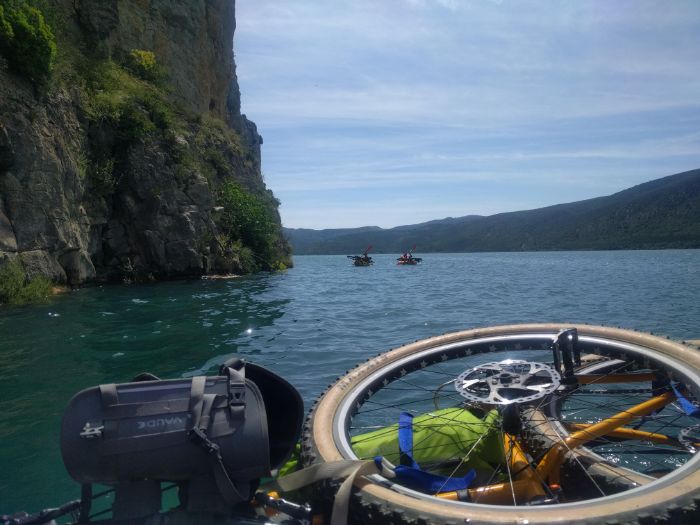 The latest Surly to put a smile on my face is the Midnight Special. It’s a bike with a true gravel soul, but it still has the brand’s trademark profile: nimble, comfortable, adventurous, and ready to be ridden either with panniers or bikepacking bags. Perfect for confronting the rough terrain of the Pyrenees, it also excels on paved and gravel climbs, on weeklong wilderness tours, on winding roads, and on lightning-attack rides. 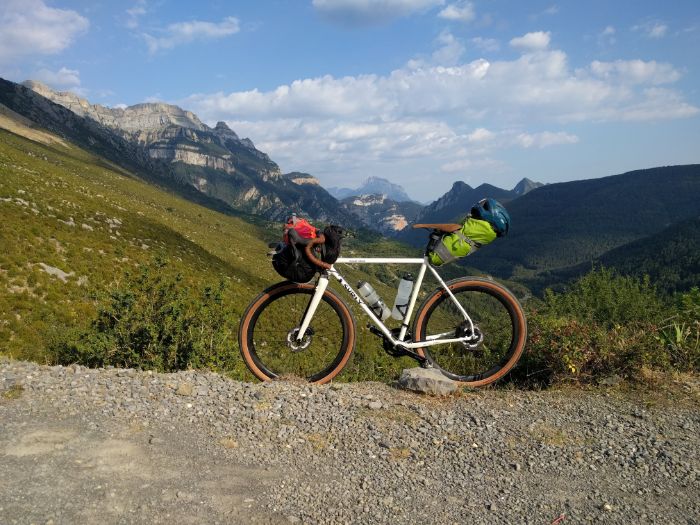 It might seem like I have a crush on Surly, and I don’t know, I probably do. There are lots of bike brands to choose from, and those other bikes have their appeal, right? But my experience with Surly has taught me there’s no better feeling than coming back home after a great trip or just after a few hours of riding and thinking: “Fuck, that was so much fun!”

I’ve screwed these bikes over to inconceivable limits. I’ve ridden at temperatures from -30ºC to +48ºC, and I’ve gone on endless journeys day after day. I’ve crossed the woods loaded to the brim and I’ve gone deep in the desert surfing dunes of fine sand that gets everywhere. I’ve waded across rivers and I’ve even descended them from their entrails in a Kayak.

No matter the conditions or destination, my Surlys always get me back home. I’m not sure I could say the same about the other bike brands.

Editor's note: If you find yourself in Spain and are looking for a Surly or just a great bike shop in general, please visit David at Espaibici.