Introducing the fully updated Surly Disc Trucker. Now’s the time to grab a hot, cold or lukewarm beverage of your pleasing and have a seat as Surly Product Manager, Amy Kippley and Surly Engineer Ben Jungbauer take us through what’s changed on the new Disc Trucker. We’ve even included a home movie that we made, starring Amy and Ben regarding all things Disc Trucker. Enjoy!

“Truth is, there is little as epic as a really long bike ride. It resets your mind. It challenges your body and spirit. It stirs and purges, soothes and recharges. ‘The daily grind’ becomes meaningful. Just you, and everything you need to live, packed up on your bike. The Trucker isn’t the bike that everyone is going to have. It isn’t the next big thing. It won’t race like a champ or scream down rocky singletrack. It isn’t about impressing your friends. It’s a tool for finding out what you are capable of inside.”
- 2007, Launch of the Trucker

Introduced with rim brakes in 2007 and in a disc version in 2012, the Long Haul Trucker and Disc Trucker have become known as world-class touring models. A quick search into the Google box will turn up results from Alaska to Argentina, London to Japan — multiple world tours, all on Truckers. Chances are good, if it’s an established pavement or gravel route, it’s been done on a Trucker.

A lot has changed since they debuted, but when it comes to road touring, there are still headwinds. You can still watch shoulders disappear into rumble strips on white painted lines. Gas station dinners can still be warmed up by summer heat. Road touring still means closed bridges, wrong turns, cautionary wide-eyes and dayglow. And with 15 years of touring experience, it’s still being done on Surly Truckers.

With this in mind, we started kicking around our redesign intentions back in 2017. You may remember this blog, documenting one of the specific tours we did to help set ourselves up for the brand-new edition.

We Tweaked the Geometry. Here’s Why.

Time and testing have shown that the Trucker family can handle a full touring load better than a lot of competitors out there. Handling under load is still paramount, but we know these bikes are used for many other daily tasks including commuting, errands, and just getting out for a ride. To address that balance, the new Disc Trucker has slightly shorter chainstays that add more agility when riding unloaded or with only a few things. There is still plenty of heel clearance built in, even with oversized panniers. 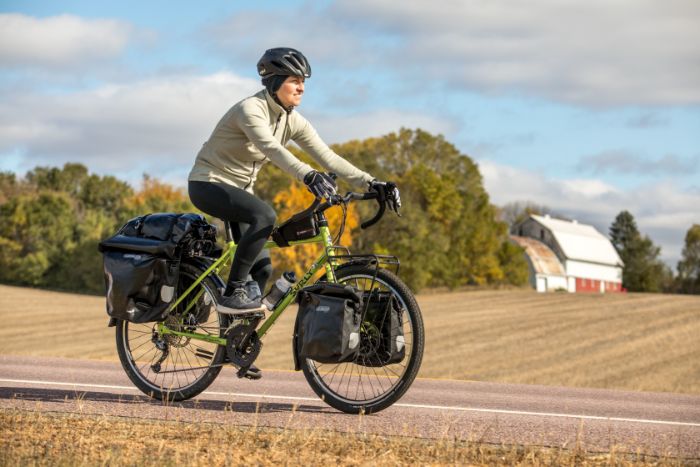 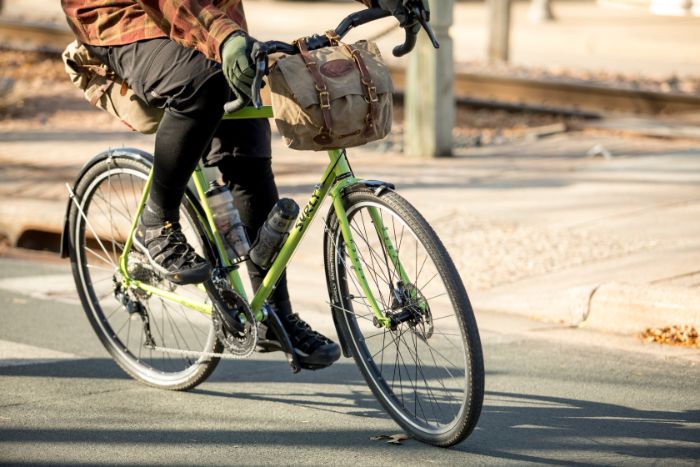 The general use of the Disc Trucker necessitates a slightly more upright riding position for long days in the saddle. Over the years we’ve seen many bikes built up with a ton of headset spacers. To combat this, we increased the stack and the headtube height. With a larger stack comes reduced standover clearance. So, we massaged the numbers to net just as much (if not more) standover than the legacy model, but you may notice that not all sizes have a truly horizontal top tube. That’s OK. Take deep breaths. Fit comes first.

This is where we really brought the Disc Trucker into the next decade. Thru-axles are commonplace on most trail bikes these days for good reason. They provide added stiffness to the system where you want it. Added stiffness makes a lot of sense when talking about a fully loaded touring bike. When we first started working on this redesign, we were pretty sure we wanted to introduce thru-axles, but not without doing our homework.

In our first round prototypes, we used a legacy Disc Trucker frame and modified the frame and fork to accept 12mm thru-axles. We then built up an identical QR-axled model and formulated a testing strategy on a short, repeatable course. We spent the good part of a year comparing these side by side. Overwhelmingly, we experienced more confidence in handling, less frame flex, and less load “wag” while riding the modified frame. 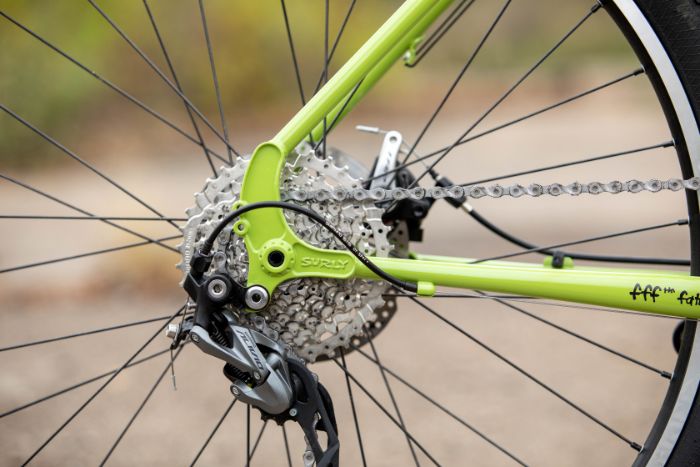 The new dropouts are built around a 12mm thru-axle front and rear, and the bike is spaced at 100mm front and 142mm rear, with threaded axles. These axles are a departure from the standard axles in our line, but they have some distinct advantages for a fully loaded touring bike. Both the frame and fork feature a slotted dropout on the non-driveside, and a captured/threaded dropout on the driveside. This still gives most of the stiffness of a fully captured thru-axle system but allows the rider to drop the wheel out once the axle clears the threads. This can be great when you have panniers front and rear and don’t want to take everything off just to fix a flat. This also allows you to keep the axle in the wheel, reducing the chance of losing your axle or getting road grit in the threads.

The frame and fork have been modernized to conform to the newer flat-mount standard, commonplace in most road bikes these days. Some people wax on about how much cleaner flat-mount brakes look. That may be more on the level of personal preference, but we are at the mercy of the industry and most road groups are going to use flat-mount brakes exclusively. The fork uses the rear flat-mount standard in place of the fork standard. As a benefit, this doesn’t require the additional adapter that the front mounting standard requires. We also didn’t need to incorporate the lower mount into the dropout casting, which helps with rotor clearance.

People Come in Different Sizes. So Do Wheels and Tires.

Here at Surly, we pride ourselves on designing bikes to fit their intended rider the best we can.  In order to keep cockpit and steering angles in check and still provide proper toe clearance, wheel size is a primary consideration when talking about fit. We stuck with a mix of 26” wheels (42-58cm) and 700c wheels (56-64cm) to make sure riders of all sizes feel comfortable on long rides. 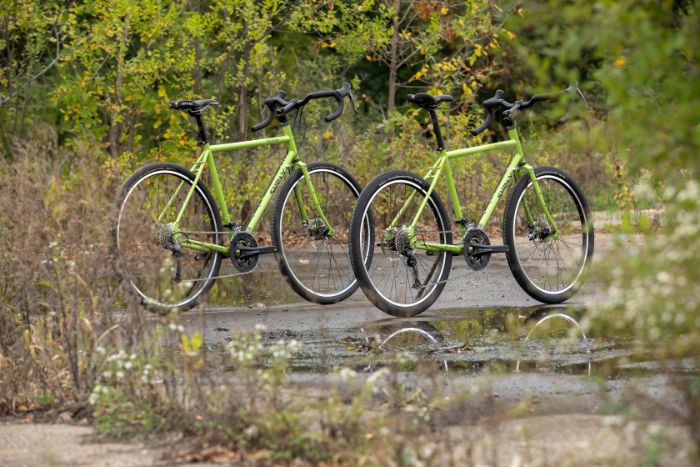 The legacy Trucker models fit pretty wide tires, but the tire clearance wasn’t consistent between the 26” and 700c frames. Both frames now match and will accept up to a 47mm wide tire.

We couldn’t call this update good and done without some serious saddle time. No Surly bike is complete without multiple overnights and commuter miles, but in the case of the Trucker, we focused even more on longer expeditions on pavement and gravel. We’re working on a future blog to detail just what these development missions look like. More to come…

Other Bits and Bobs 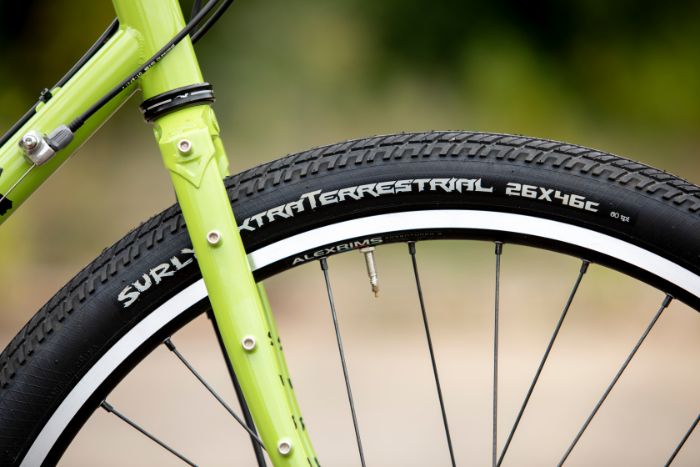 To see the complete list of spec, the all-new geometry and pretty much everything else, head on over to the Disc Trucker Bike Page.