Make It Your Own: The Kid-Haulin’ and Kite-Flyin’ Big Easy

Our next “Make It Your Own” is a Surly Big Easy belonging to Scott Haraldson, QBP’s Customer Service Supervisor. If you’re interested in Big Easy—our long-tail electric cargo bike—or if you’re just into hauling five kids, pizza, and a couple of cases of beer uphill, grab a seat and settle in for a little Q&A about the bike that makes that possible. 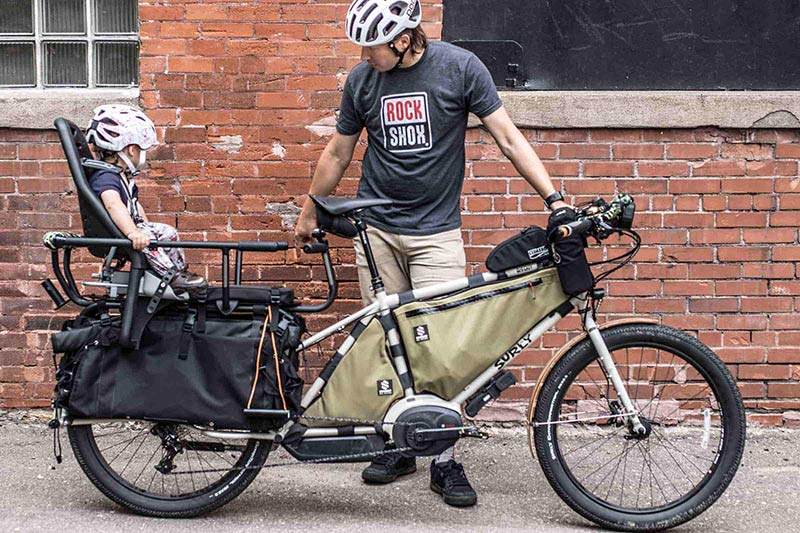 SURLY: What made you choose Big Easy, Scott?

SCOTT: “We’ve been a Big Dummy family for probably 4 or 5 years. It’s probably the best bicycle I’ve ever purchased… It’s been great for moving the kids around and hauling their stuff. But once I got wind of the Big Easy, man—my kids are growing and we’re starting to go camping. When the kids come along, we need to bring a lot of stuff.”

SURLY: Big Easy’s electric-assist makes it easier to haul your kids and all their stuff, right?

SCOTT: “Yeah. With the Big Easy, I know I’m not gonna be as tired when I get to places. The ride won’t be such a grind, because [hauling gear] can be a grind, especially on a hot day. I’m not a super-performance athlete by any means, so once we found out about the Big Easy, we wanted to do it.” 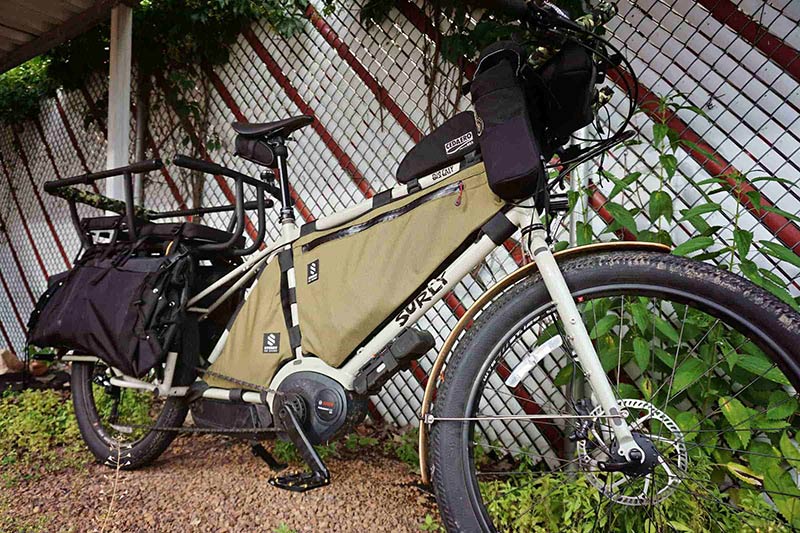 SURLY: So how are you using Big Easy?

SCOTT: “We have a 30-mile commute one way to work, from Maplewood to Bloomington, so we’re still using our cars often. My wife [Laura Haraldson, QBP Operations Manager] will ride her bike to work in the morning, and I’ll drive-in with a bike in the back. Then at night, she’ll drive home with her bike in the back and I’ll ride mine home.”

SURLY: And the bike’s battery can get you all the way home?

“It’s easy enough to make the 30-mile commute on a full charge. A little bit of Turbo, a fair amount of Tour, just mixing it up a little to find the sweet spot. I love the range on there.” 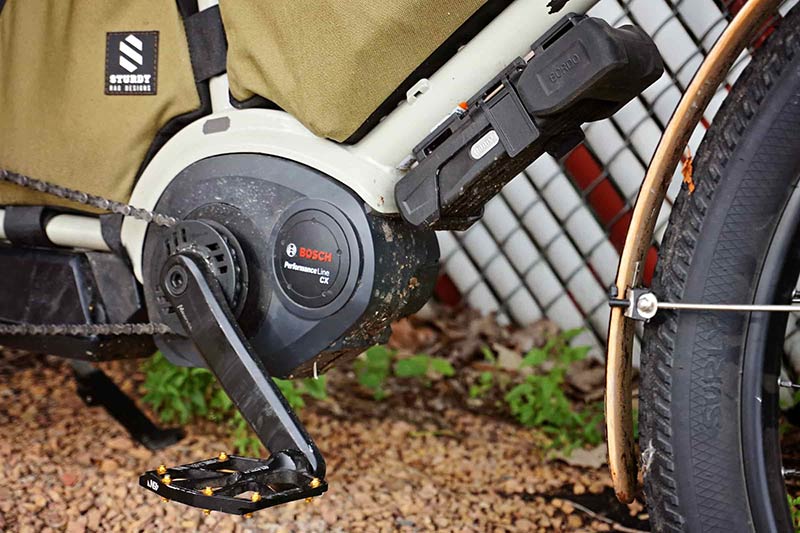 SURLY: Where do you ride when the kids are strapped in?

SCOTT: So, we have three girls [ages 10, 7 and 4] and one boy [20 months], so the two older kids ride in the Kid Corral and the two younger ones ride in a Burley. We pick them up from daycare, we pick them up from school. Last weekend, my brother-in-law was in town with his two kids. And I was like ‘Let’s ride over to Aldi and get some pizza for tonight.’ So we showed up at Aldi hauling five kids and put all the pizzas back in the Burley. Then [I remembered] my other brother-in-law [would be] coming later in the evening, and we weren’t gonna have enough beer. So we hit the liquor store and loaded up. Five kids, groceries, two 24-packs of beer, and the Big Easy doesn’t even flinch. It just keeps going.”

SURLY: What else have you done with the Big Easy? Same stuff you were doing previously with Big Dummy, or new stuff?

SCOTT: “I would say we’re just riding more now. It’s still work, but we’re just getting out more, riding to the park or whatever. My brother-in-law just found this kite in my garage and wanted to use it, but there was no wind. So I told him, just jump in the corral and we’ll just ride around the neighborhood. And sure enough, riding around at 20 miles per hour on Turbo, we had that kite up in the air in no time. You don’t need wind with the Big Easy.” 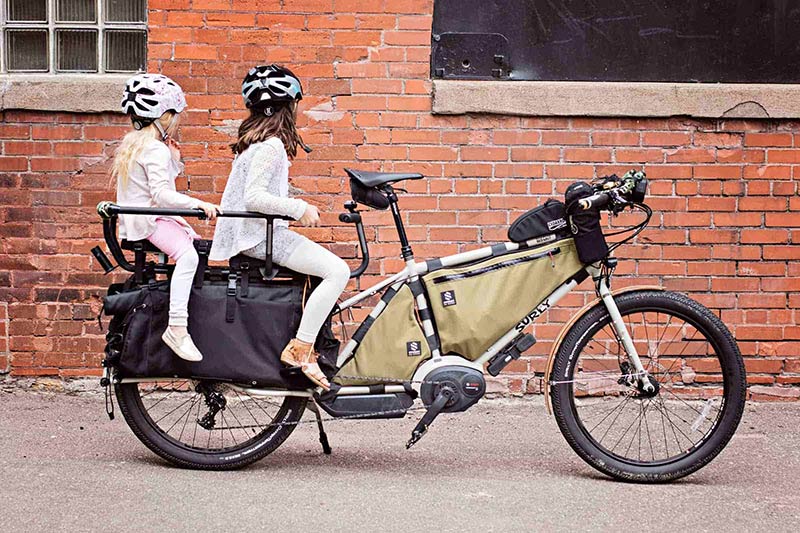 SURLY: What else do you plan on doing with your Big Easy?

SCOTT: “Someone’s welding me a new deck plate so I can use my kid’s Tag-A-Long. My two youngest kids can still fit in the Burley when I do daycare pickup, but they’ll grow out of that soon and it’ll be time to switch to the Tag-A-Long, which is seat-post mounted. That’ll be pretty slick for pulling the kids around.”

SURLY: Walk us through the rest of your build.

SCOTT: “Some of the stuff I’ve replaced didn’t need to be replaced. Portland Design Works came out with their own kickstand, the Power Stance, a big cargo kickstand. Big Easy comes with a sturdy, stable kickstand, but I just can’t leave things alone. I gotta have my Power Stance kickstand on there.” 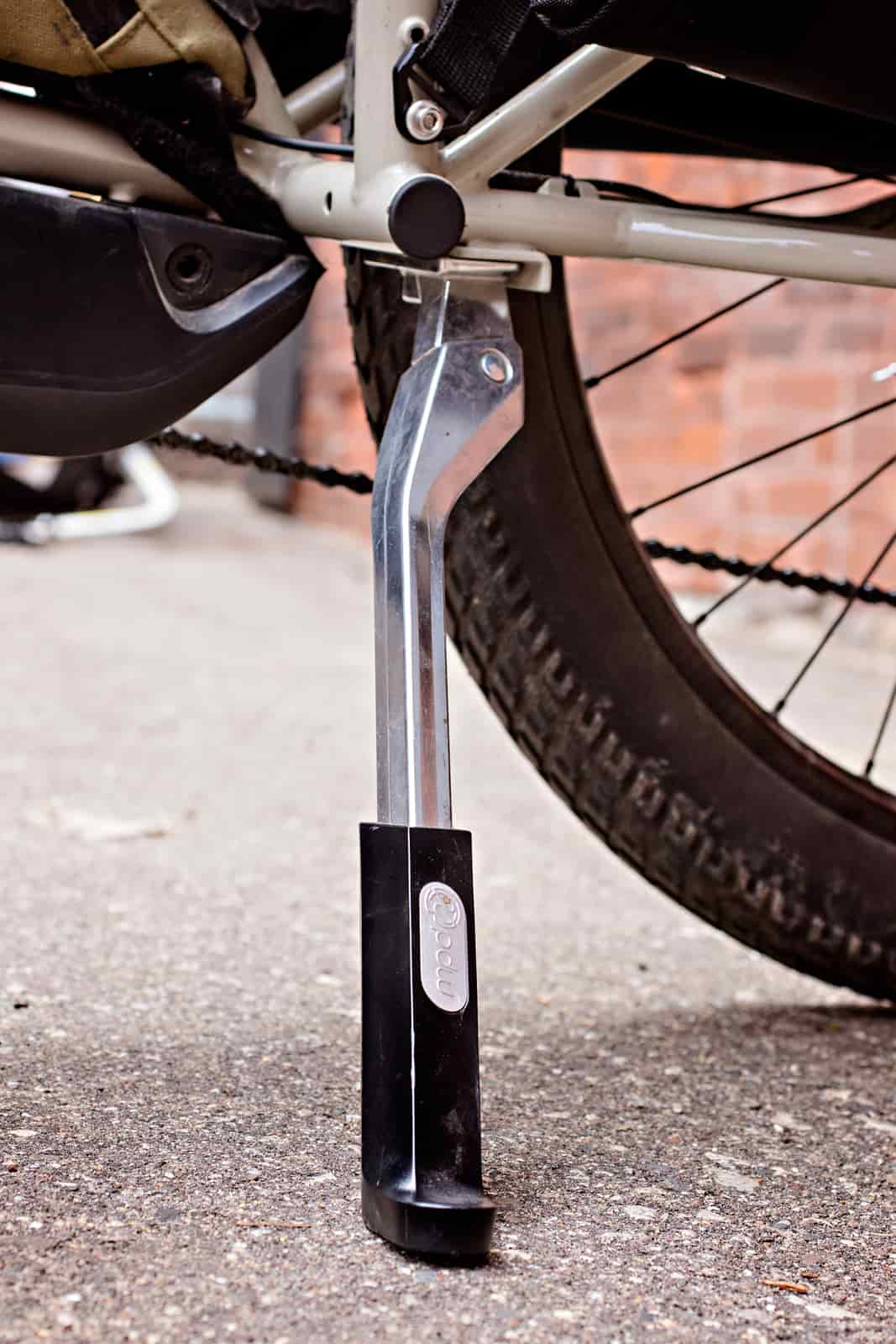 SURLY: What handlebars are you using?

SCOTT: “I swapped out the stock bars for the Moloko bar.” 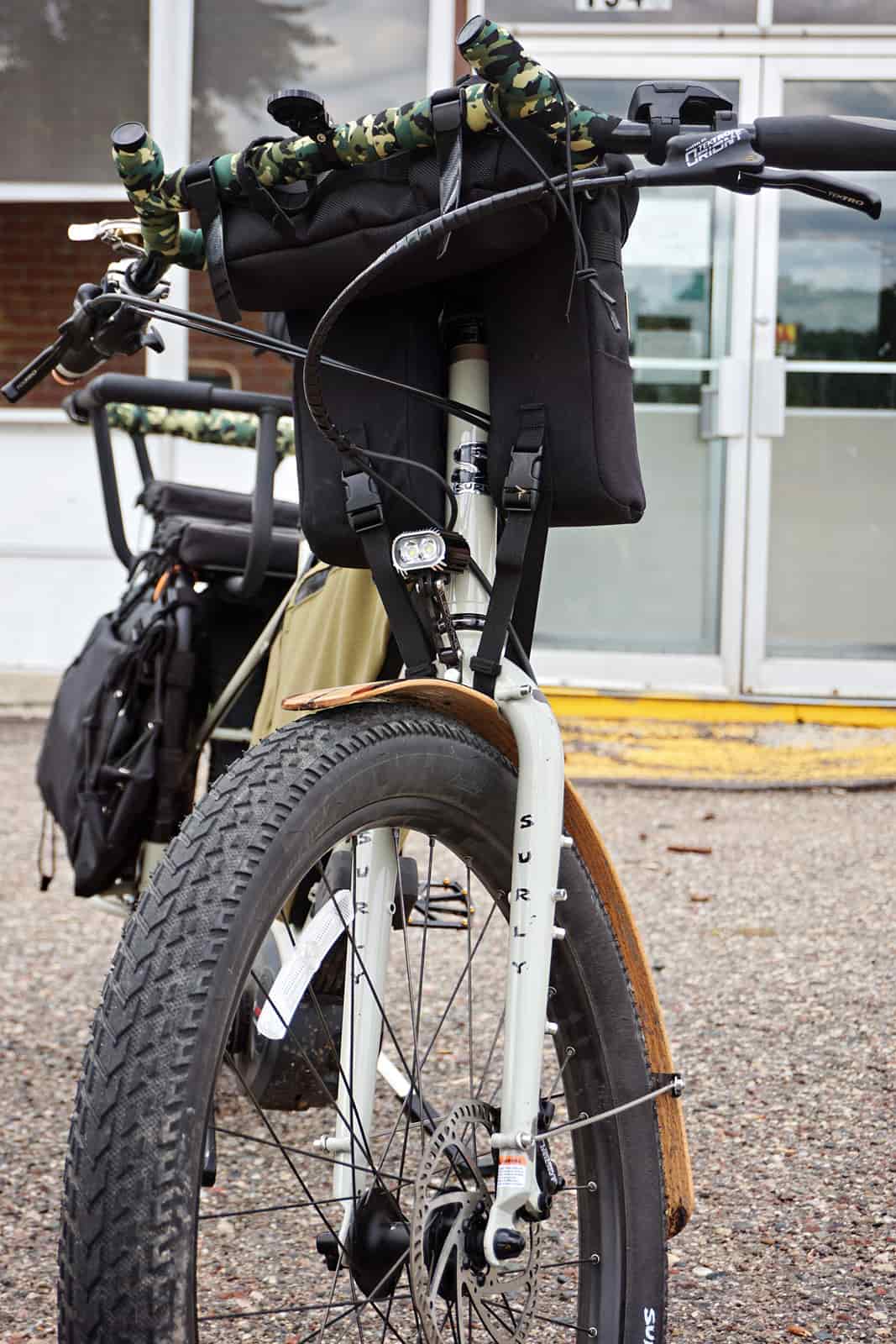 SURLY: Why the Moloko Bar?

SCOTT: “I’ve always been a fan of the swept-back kinda Jones-style bar. Surly made it and I thought it would be a good choice. I like all the hand positions. I’ve had some numbness in my hands with different bars, so I definitely use the Ergon grips on there. I love the Moloko bag, too, the Adjunct Personal Affects Receptacle, because I’m the guy with the Bluetooth speaker up there.” 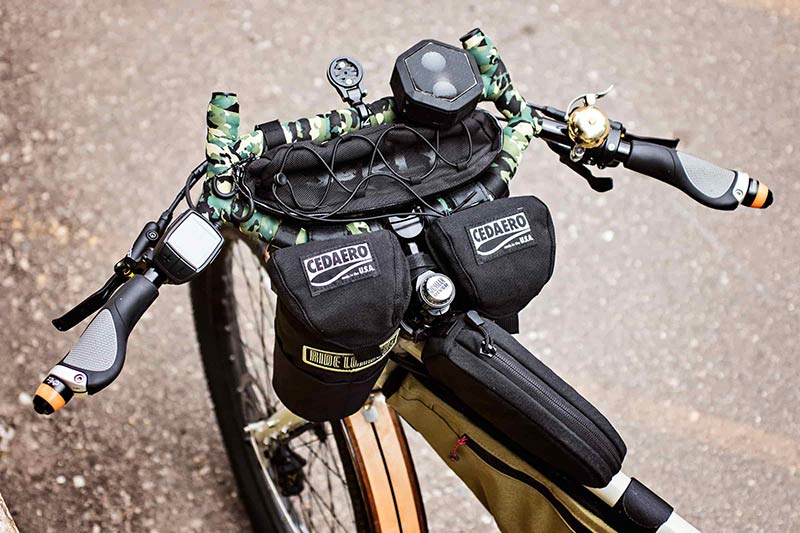 SCOTT: “I had trouble getting on and off the Big Dummy sometimes, so I put a dropper post on my Big Easy right away. Since my kid is riding in the Burley instead of the iBert bike seat on the top tube, I don’t really need the dropper post after all, but it’s fun to have on there.”

SCOTT: “I’ve got turn signals on my bike, blinkies. I found them at a sample sale. I’ve got bags on there. When I put the frame bag on there I knew I’d lose my water bottle mounts, so now I’ve got Cedaero making water bottle bags for me. They’re gonna do their Devil’s Kettle bags for me, and I sent them a couple of Surly Ride Loaded patches to customize them a little bit.” 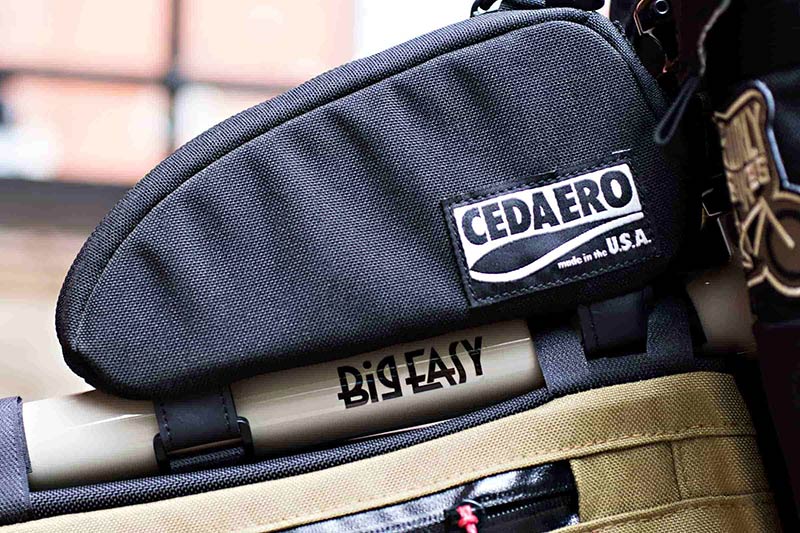 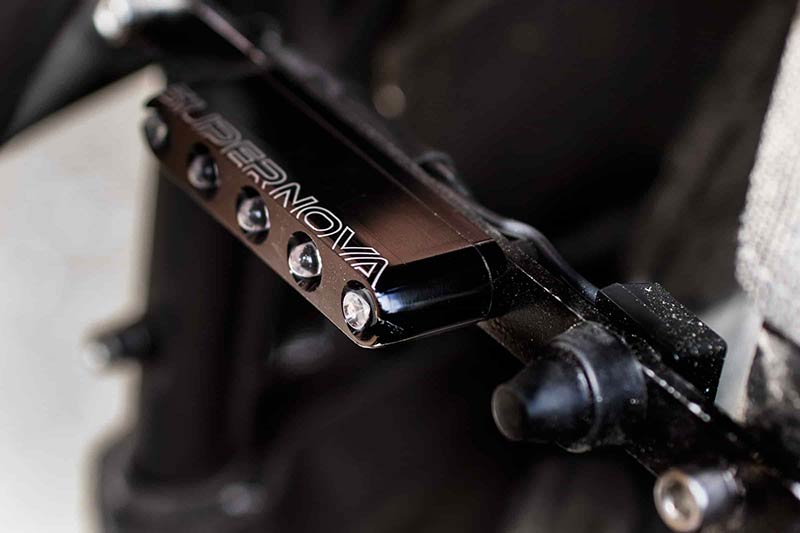 SCOTT: “All the custom bags! I always carry my charger and it’s in a nice little waterproof bag I keep with me. In addition to the Cedaero bags, Sturdy Bag Designs did the frame bag and the smaller triangle in the middle of the bike.” 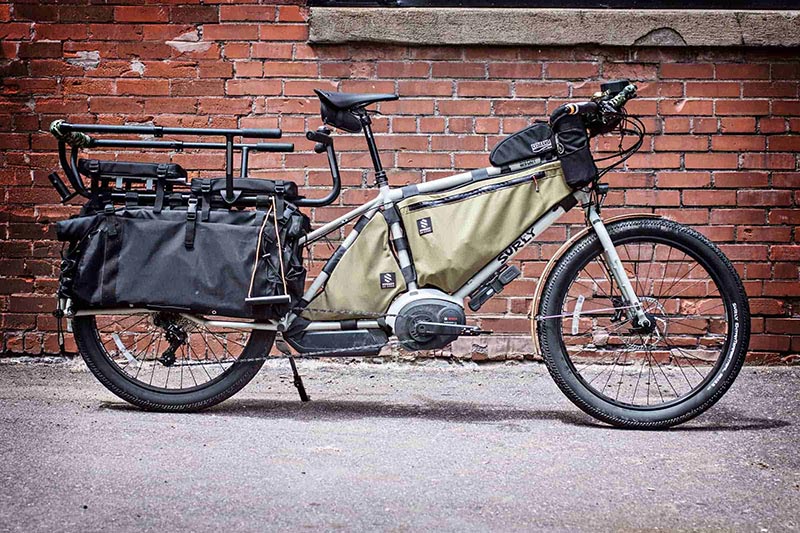 SURLY: Do you plan to do anything else to ‘Make It Your Own’?

SCOTT: “I’d like to install brake lights and integrate them with the Bosch motor so when you squeeze the brake it kills the motor and turns on the lights. Also, you know the Big Easy logo? Can we get a custom name badge on the top tube? SCOTT HARALDSON in the Big Easy lettering treatment?”

SURLY: We can do that, Scott.

If you've got a unique bike setup yourself, tag @Surlybikes and add hashtag #SurlyMakeItYourOwn to your Instagram post. If we see it, we might reach out to you. But we can't promise anything (we're kind of non-committal).