Make It Your Own: Abner’s Bridge Club/Big Easy Double Dip

Back in September 2020, we introduced you to Humanoid of Surly and Dad Bike Enthusiast Abner Z. Rangel-Leal. At the time, Abner was hauling two kids and a sack of groceries around the greater Salt Lake City metro area on his do-it-all, ready-for-anything Bridge Club. Since then, he’s added another kid and a Big Easy to his fleet. (Congrats on both accounts, Abner!) Today he’s taking over the Surly blog to tell us how he’s made these bikes his own. Let’s hang up and listen. 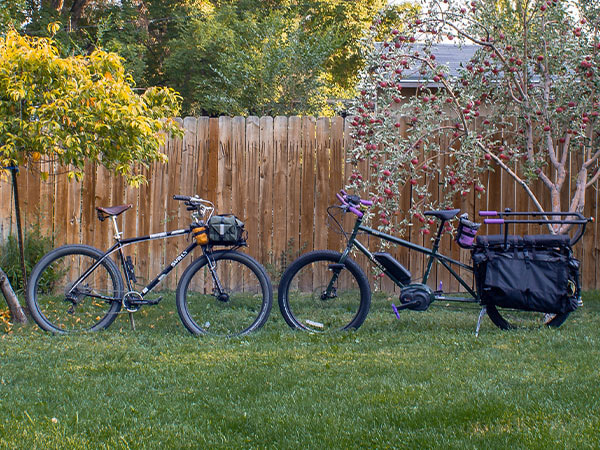 Hello fellow humanoids. Abner here. You last heard from me during my induction to the Humanoid of Surly blogosphere. I heard some of you read it, which was cool. The rest of you can pound sand… with your bike tires of course. Maybe even go have some fun, see if I care. Anyways, during my last 2,870-word tirade, ever eager to set up my next move in the Surly Blog-o-matic Universe (SBU), I dropped a bit of what the kids are calling “ [an] Easter Egg.” It went a little something like: “Next step in my journey to steel nirvana: **whispers** Big Easy**drops mic**.”

As always, a man of my word, I went ahead and followed through with the promise nobody asked me to keep: I reached steel nirvana. And just like Seinfeld would have found out had Elaine not tripped in the sauna, “[Big Easy] is real and [it’s] spectacular.” **’90s canned laughter** So, take that to your Porsche-packed garage and suck on it, Seinfeld. I always liked Newman better anyways.

I bought the Big Easy. 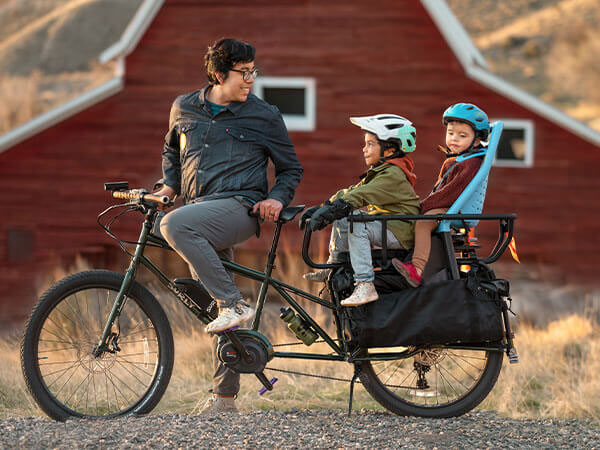 A little soul-crushing, economy-collapsing, paradigm-changing event called The Pandemic, (Lé Pandemique for my Franco-philes in the back).

But first, a bit of context.

I ended up on a Surly due to a series of events that ended with a cash exchange of my full-squish fat bike. That’s how Bridge Club came to be. 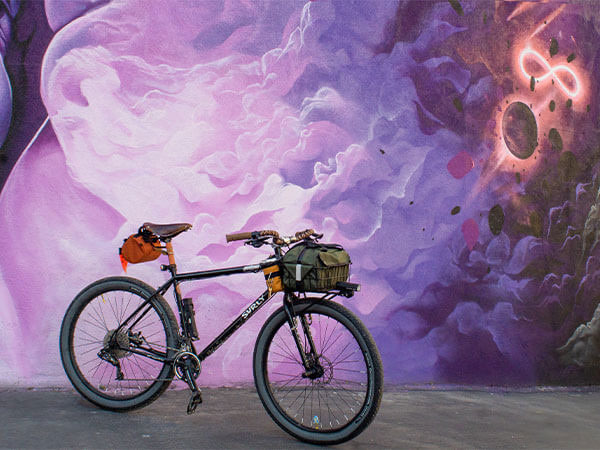 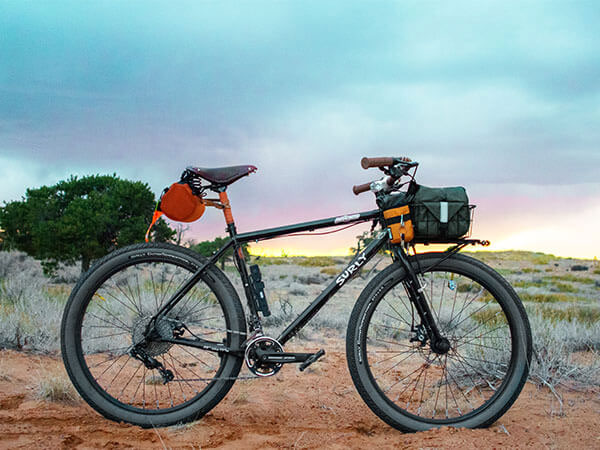 After Bridge Club it was like the floodgates opened. Wednesday came a year later in 2020 (among the few good things that happened that year). But there was still something missing.

When Big Easy was announced early on in 2019, I knew a cargo bike was in the future; and I knew I wanted that cargo bike to be Surly. How I would get it was a mystery. For one, there was the price tag. How much riding/utility would justify the cost of Big [Fat] Dummy, let alone Big Easy? Then there was the moral question of it all: how could I honestly claim to seek a more minimal lifestyle while at the same time accumulating thousands of dollars’ worth of bikes? My approach seemed a bit backwards, conveniently self-centered and half-assed. [Ed. Note: Surly approves.]

Then I opened the mail one March morning. The DMV was informing me that the registration was due, and it was time to pay up. Registration on an ’04 Honda Element isn’t much. $120 for registration + emissions testing. Plus all four tires were looking a little bald so they’d need to be replaced before winter, that’s $600 at least… Ah shoot, the A/C pump was due to go out, I don’t know, but I’m guessing that’s a thousand-dollar repair… Gas for the year on a car that sits parked most of the time is still going to run about $600 for the year… Tack onto it the $500 insurance bill for the year and I was looking at, conservatively, a $2,800 bill sitting in my driveway. All in the name of convenience.

Turns out an electric cargo bike that costs as much as a car totally makes sense when you have a used car as the backdrop.

My sweet wife gave me the ol’ “IDGAF what you do with your car. It’s your car!” signature of approval and that was all the motivation I needed. Game on.

My car was posted and sold in under 48 hrs.

Car ownership had once again let me down and led me to two-wheeled bliss.

I bought a Big Easy at the end of March… it really has been bliss. 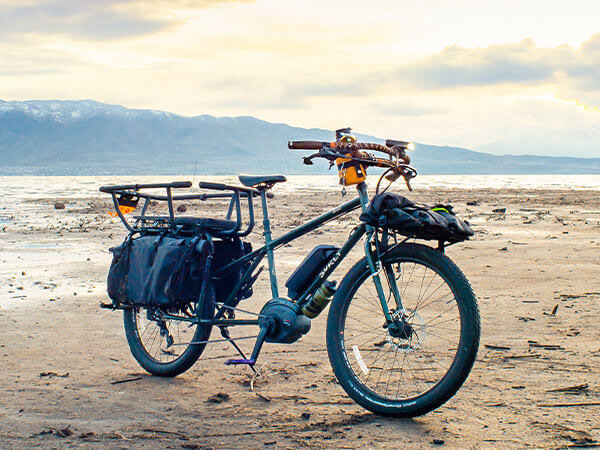 Like I said before, Big Easy was an easy decision (couldn’t help myself) once I factored in the cost of maintaining a used car that had ticked over 140k miles. That’s only part of the story, though. BE was also a step toward living a non-sedentary lifestyle on my terms. Some people choose to fight sedentism by going to the gym, practicing a martial art, hiking, overlanding, etc. I picked biking. That’s not to say biking is objectively the best (I do think that… subjectively) or that it’s the most fun. I just think if I’m going to sweat, curse, and subject myself to pain, well, I may as well feel the wind on my face and see some sights. Being stationary as I exercise never sat well with me. That’s probably why I don’t look like a GQ model. Anyways, BE was a simple, and let’s be real, privileged and expensive, way to force myself out of the standard American lifestyle of driving to work, driving home, driving to the gym, driving to the store, driving to have fun. Drive drive drive. 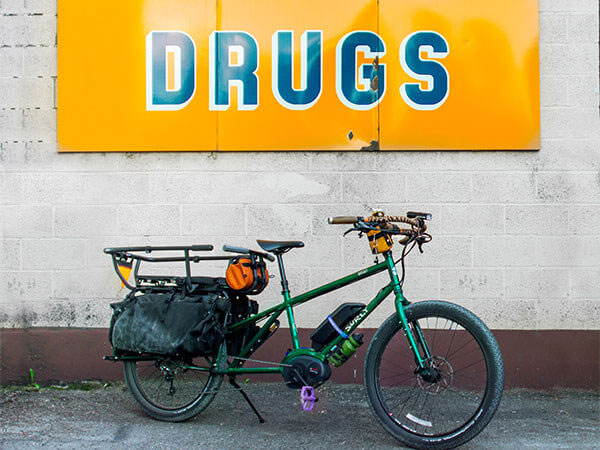 I should also say, I have no grand aspirations to eliminate or replace the car either. We are still a one-car family. Geography, convenience, and timeliness still play a huge part in how we get around and there’s no denying that the car is an irreplaceable means of locomotion. My thing is that maybe the automobile doesn’t have to be at the center of our culture; on an ivory pedestal; millions of us kneeling at the altar and kissing its [piston] rings. Which is why I choose to ride. To show my kids not only that it’s possible but that it’s mostly preferable and always fun. I just think somewhere along the line many of us forgot how to have fun, get things done, and maintain a semblance of health, deciding to sacrifice one of the three at any one time. Big Easy has helped me reclaim some of that sense of adventure. It chases away the sensation of being in a rush to get everywhere. Like Thanos’ gauntlet, it brings all the essential life forces together. Now if only I could make some people disappear… 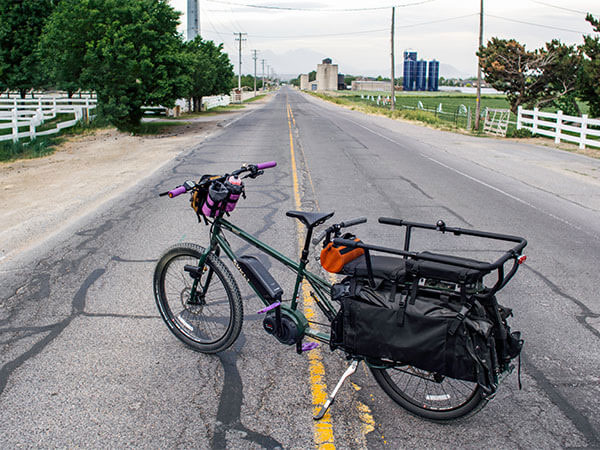 I gotta be honest, it was the best value Surly. The character actor in a leading man’s body (Brad Pitt …anyone?). A real renaissance bike. A bike for the renaissance enthusiast even. Possibly my favorite thing about BC is that no matter the activity, rack configuration, bag setup, flat/riser/loop bars, this bike is planted, super versatile, and pretty effortless to ride. All this while remaining comfortable! You may add weight and change the ride feel, but comfort is a constant on BC. A real Newtonian fluid of a bike, it maintains and gains composure as you put it through more s#!t. 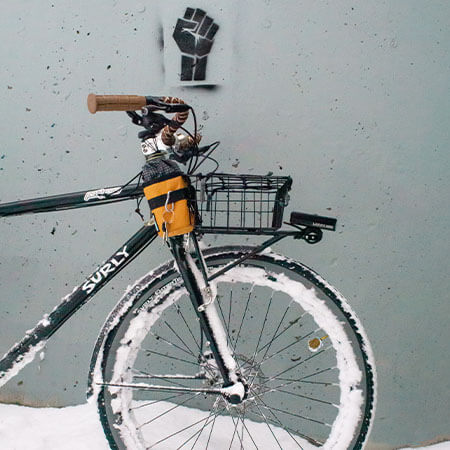 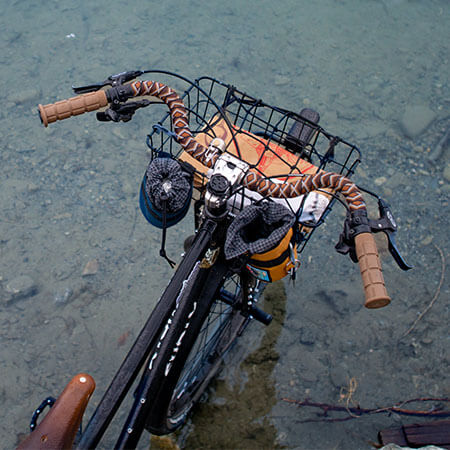 Bridge Club is my ride or die. The bike I’ll have forever, even when it becomes “obsolete.” Tough Day at the job? I’m reaching for Bridge Club. Kids went to bed early so you got some sunlight to burn? Same answer. Gotta gather dinner ingredients for 12 people from three different stores? …Believe it or not, reader, we’re going three for three on this one.

Anyways, if you want the full skinny on why the Bridge Club was just right for me, check out my Humanoids post. 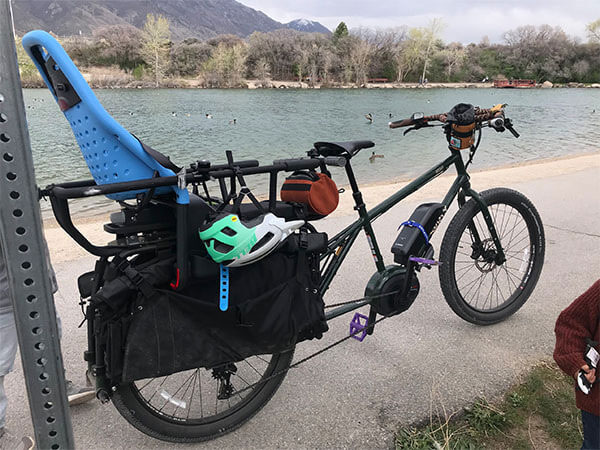 Okay…Let me get to some of my favorite pieces of customization before Surly starts playing the outro music on this one.

The bars came off first thing when I got home with Big Easy. I started with Jones Bars but those didn’t feel quite right. That’s when the Sunrise Bars on my Wednesday caught my eye. The leverage of 820mm of steel on a 60+lbs bike is not to be underestimated. I replaced the capable but ‘vanilla-flavored’ kickstand for something with a little more personality: a PDW PowerStance kickstand. Haven’t had the bike tip over since. 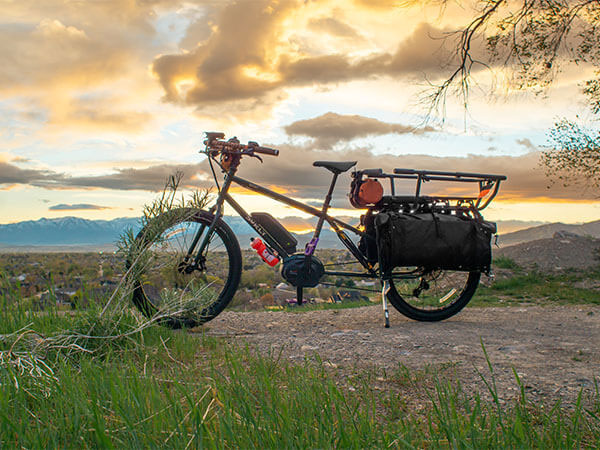 I’m sure you’ve noticed all the purple accents. That’s my older son’s contribution to the bike.

If we’re talking purely utilitarian upgrades, you can’t do much better than the Kid Corral. I wouldn’t have bought the bike without the corral. I bought it because in my mind’s eye I could imagine trebuchet-ing one of my boys off the rear deck if I hopped a curb or hit a speed bump with too much chutzpah. Last month, on a night ride, I hit a patch of gravel while making a turn going 20. Luckily, none of the kids were with me. The Kid Corral took most of the impact. Just a scratch here and there. Not a wiggle. Not a bent tube. Volvo can drink toilet water as far as I’m concerned, cause Surly is keeping my kids safe. May as well weld the Kid Corral to the deck at this point. 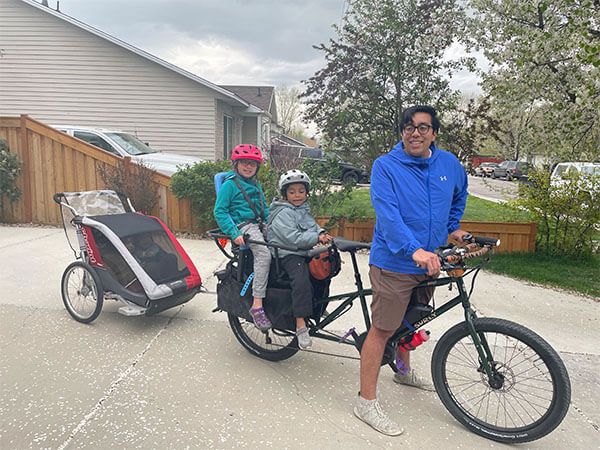 Bridge Club has been a really fun project! I think I’m as close as I’ve been to feeling ‘done’ with it. Let me start by saying that once you strip all the racks, bags, and contact points (pedals, cockpit, and saddle) you’re looking at a bone stock 2018 Surly Bridge Club. The drivetrain, hubs, and brakes have been absolutely sufficient for my needs. They may get replaced but it will be out of necessity. I believe in minimalism in what makes the bike move and stop, maximalism everywhere else. I figure that’s the best way to keep me from ‘fixing’ something that ain’t broken. 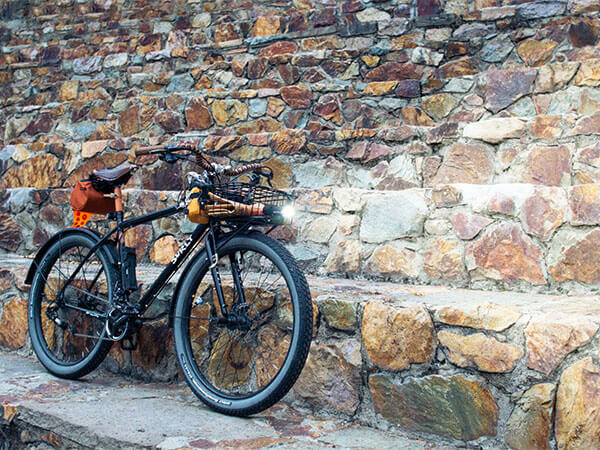 Anyways, my favorite customization on BC is a hard question indeed. I love the cockpit. I think it really sets the tone aesthetically and comfort-wise for the rest of the bike. Real relaxed, timeless, durable type of fun. I swapped out the factory stem for a 50mm Chromag HiFi V2 stem. I put some Oury BMX rubber grips on there. I’ve had Ergon cork grips but something about the Oury’s under-engineered comfort spoke to me and I haven’t missed the Ergons… much. The original bars got swapped for Surly’s Open bar (read the FINE PRINT … don’t forget your 25.4mm to 31.8 mm shims when installing to a MTB stem). I also wrapped the bars in Camp and Go Slow’s Western Rattlesnake Tape. Why bar tape on a flat bar? Let me let you in on a little-known secret. Lean in closer… cloooserrr… just a liiiitle closer…. CAUSE SHUT UP AND DON’T ASK DUMB@$$ QUESTIONS LIKE THAT, THAT’S WHY! 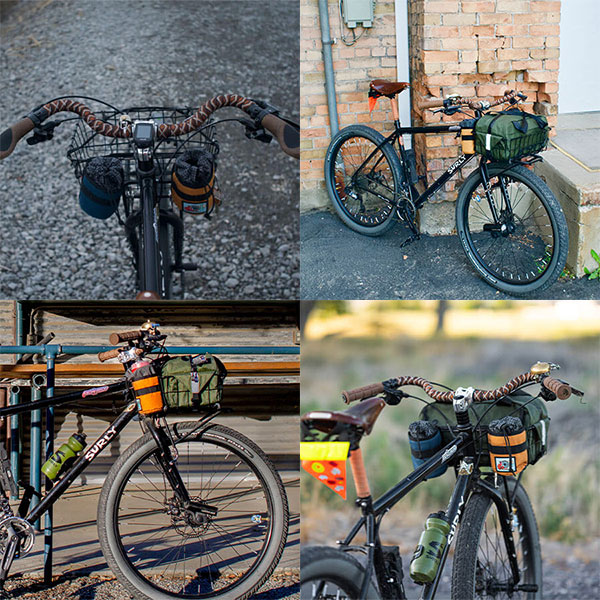 I could go on and on about BC so drop me a line if you have other questions.

So that’s it. Two bikes. Two MIYO projects. Lots of moolah spent. Endless fun to be had. Sentence fragments galore. One life changed.

A quick tip for all you budding MIYOers: The only DIY skill in my admittedly shallow pool of on-the-bike talents is making my own valve caps. I choose Pokémon ‘cause –– ‘90s kid. But you can grab any random object, drill a hole, insert a valve cap and throw it on your bike. Easy peasy. For the less DIY inclined, roached clips makes some nifty stuff as well as KustomCaps.

Here’s the rundown on the rest: 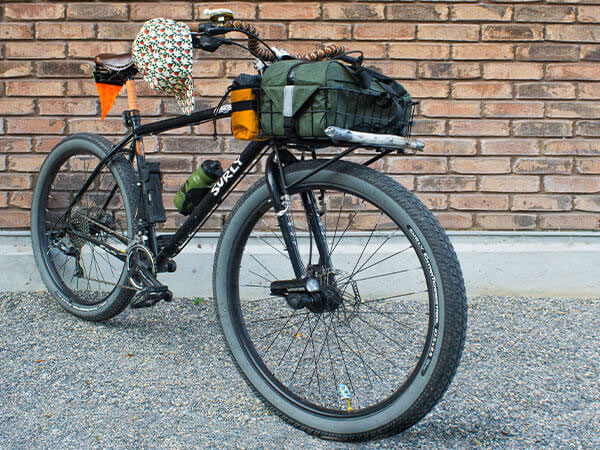 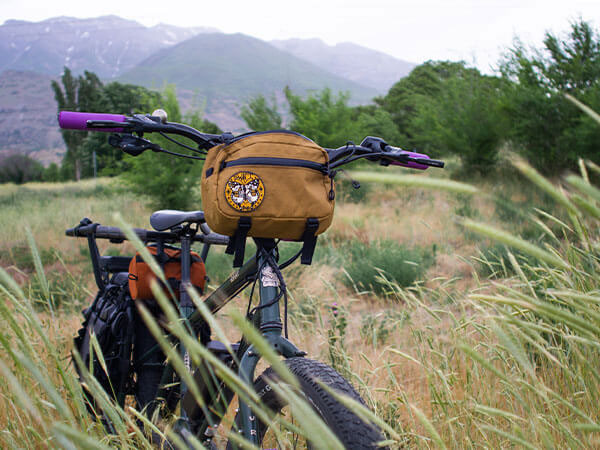 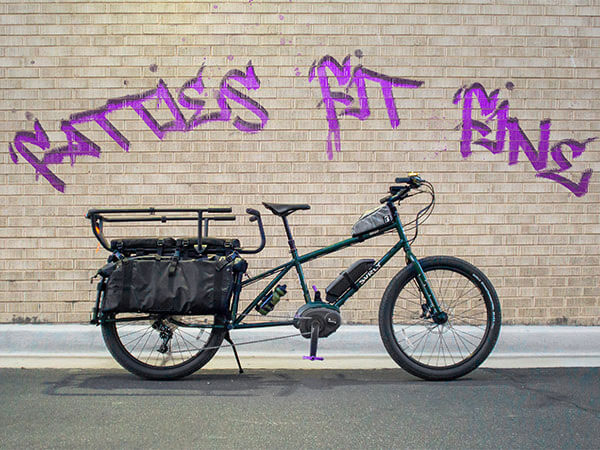 “I’ll tell you what, you can get a good look at a t-bone by sticking your head up a bull’s ass, but I’d rather take the butcher’s word for it.” – Big Tom