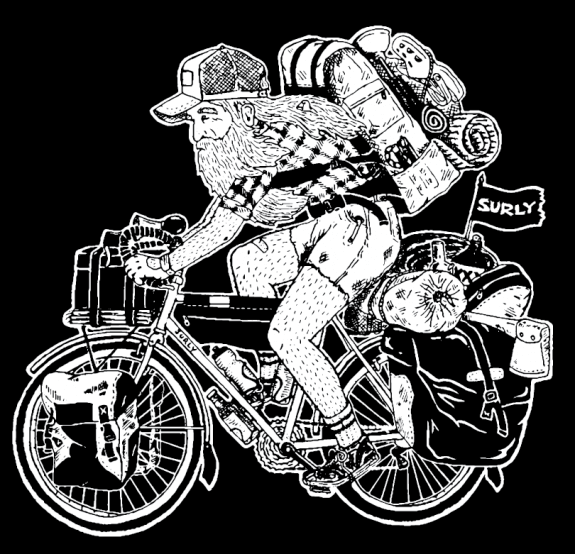 So the other weekend as a means to hasten the arrival of the weekend hours of leisure, myself, Mr. Fleck (Surly sales overlord) , Cross Wizard (Counterculture legalese) and Miss. Moore (Our FNG killing the CS game) ducked out of work on a Thursday afternoon and pointed our bikes towards greener pastures. Our goal was simply a meager bacchanalian overnight just west of the city in a quiet nature preserve. A spot most of us at Surly have camped at numerous times a season over the years; an easy 30 miles from the Qube Farm office space. The day was gorgeous, near perfect skies and temps right around short shorts and tube tops centigrade. We fueled up on provisions (chips, dips and beer) in the town of Victoria on the edge of the park, Fleck had the Big dummy so naturally he carried the bulk of the beer. We drank, we ate, we made fire, we swam under moonlight, we belted out some Bowie versus, we likely embarrassed ourselves on our stagger back to camp and eventually we fell asleep. 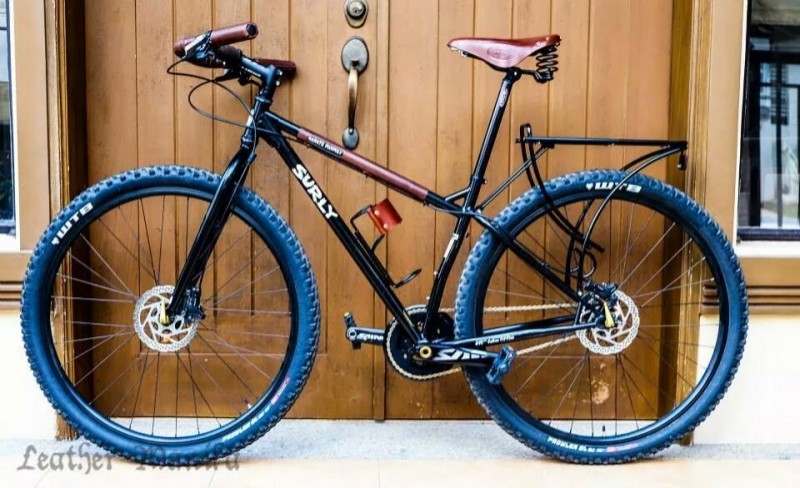 The next morning after, we put the pieces back together, drank coffee and left not a trace. We then split up as some were bound for meetings and others for hearth and home. I on the other hand, not having a god damned thing I "had" to do that Friday, decided that on my way back towards the city, after a lunch and more coffee on the trail, I would just set up another camp at the first opportune pull off along the bike path I was following. The point being to relax and revel in the lack of commitment to anything or anyone I was currently enjoying. Freedom just tastes so sweet sometimes; sunshine, tunes and dependable ol' 4130 between your legs. 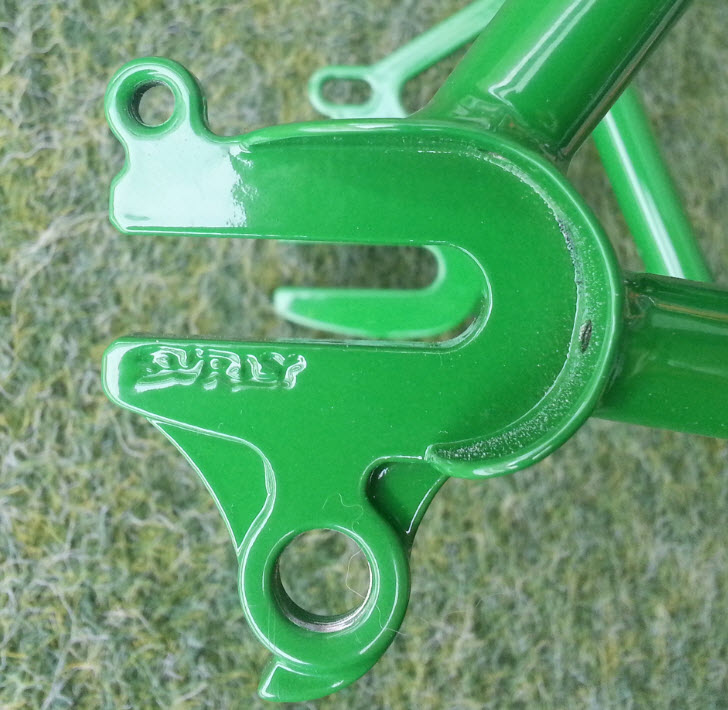 I was also very much interested in documenting what it means to just pack up and go on a whim, for I had honestly not planned to go camping the day before. I literally woke up that Thursday morning and threw a bunch of gear in my frame packs and pedaled into the office; the minimal pack list assembled in my head as I lay in bed, my routinely bizarre dreams from the past night evaporating into birdsond and cicada drone. I know that a fair amount of us cycle touring "veterans" likely take for granted the tried and true pack list and muscle memory reflex of packing for a simple overnight or weekend excursion. But it is fun to think back to the days when your gear list was not so dialed and the packing was hours of trial and error while you realized that either the chess board, the mini keg or the mandolin had to be cut from the list. (the mini keg usually won out of course). I have always been lucky enough in that i road with people way more experienced in the art of bikepacking (as we call it now) than I and thus had good mentors, was constantly surrounded by gear critics (and snobs), and so my learning curve was relatively painless and i never wasted much time/money on sub par tools. My point being is that i recognize that not everyone has a good starting point in mind so I thought I'd share a brief snap shot of a relatively minimal pack list, tidy enough to fit on a "road bike" or in my case my murdered out, blacker than a Boreal forest on a new moon, 650b Surly Straggler. 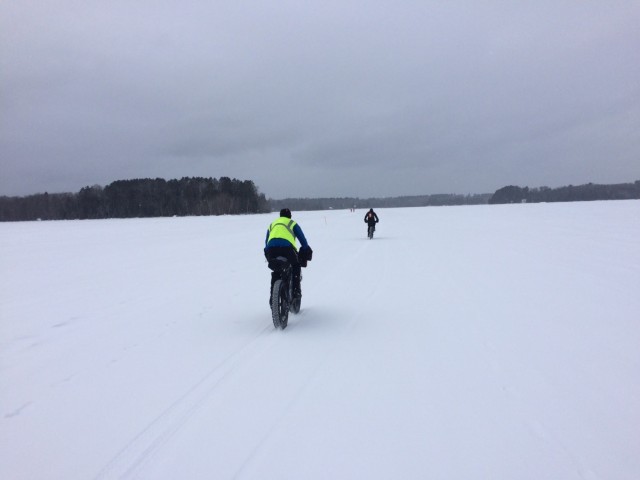 I found a spot under a railroad bridge, rusty dry and partially shaded. A perfect place for any wayward hobo to kick his feet up for an afternoon or night. 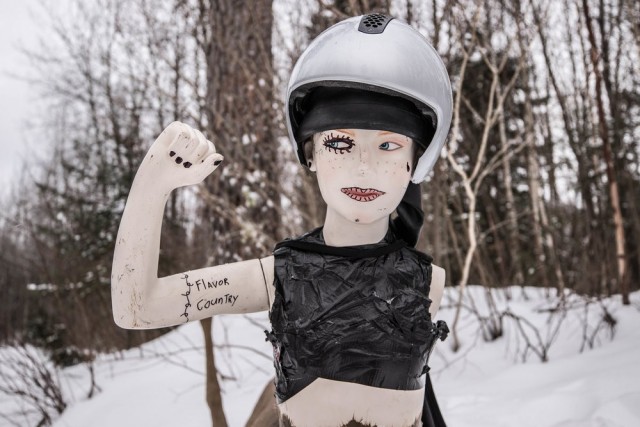 The steel supports were perfect anchors for my basic Eno hammock and the retaining wall made a perfectly level entry to my nest. 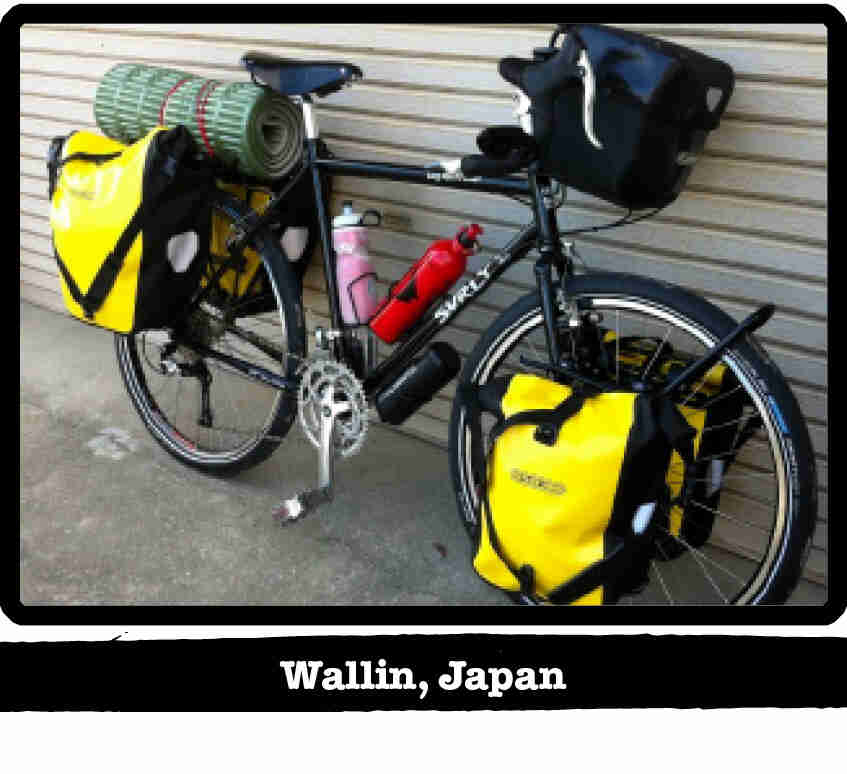 I know many folks might even scoff at the excess of gear I had for a simple overnight but the point was pure luxury as long as my frame and hydration packs could house the volume. This is by no means a "ultra light" set up but it certainly wasn't a burden either. My toothbrush has a handle and I usually pack a pillow so there! No esbit stove or bivy sac this time though that would have lightened the load a little for sure. 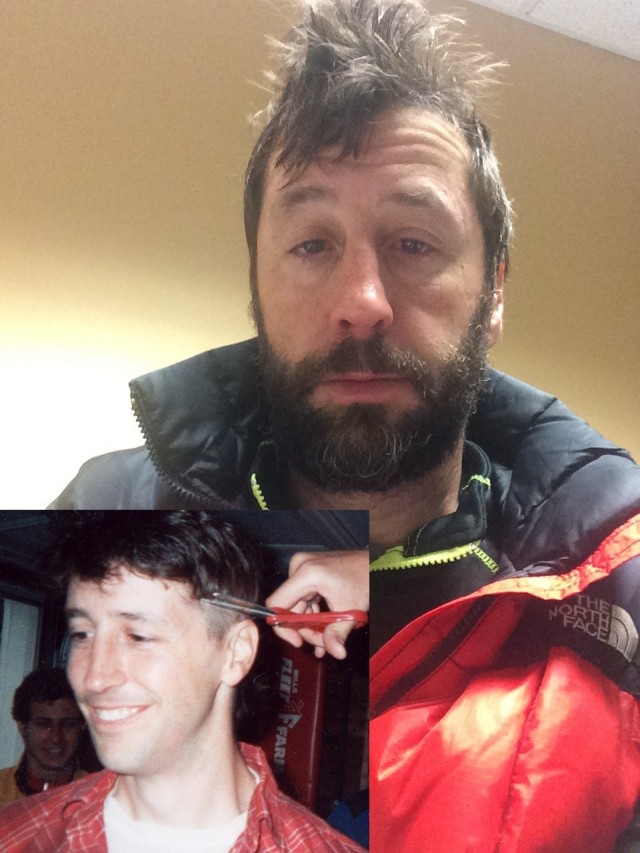 The basic ingredients stirred into the camp cauldron were:

You'll notice the use of stuff sacks to group clothes, foodstuffs and tools separately. this makes locating the exact think you are looking for easy and can help to compress your load into tidy units that are easy to stow and access. I have found that over the years I definitely prefer a compartmentalized system over the Judas Priest style "Ram it down!" method. I often use socks and base layers to fill up any voids or wrap the jangly bits to buffer any noises. 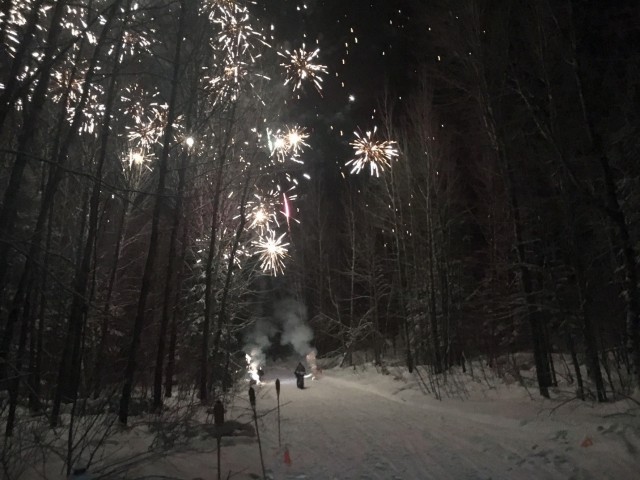 The sausage casing that made my gear portable is really the key variable as to why certain items took precedent (dimensionally speaking) and what actually made the ride enjoyable as the bike seemed to forget that it had any gear on it at all, was the frame bag system. This magic combo was a Revelate designs proto frame pack for our "pavement/touring" line of Surlys, housing most of the tools, clothes hammock bug net and food (heavier stuff in the lower portion of the pack, resting near the bottom bracket. Revelate Viscatcha expandable seat pack with heavier hammock bits and some clothes up front and the sleeping bag stuffed, sans sack, into the remainder of the cavity. Revelate gas tank bag for bike tools, phone and snacks. The Deuter hydration pack carries my water, sleeping pad, cookset, Boombot, food and the rest of the odds and ends I couldn't fit elsewhere. The standoff back on the Deuter really makes wearing a pack a non-issue, no profuse back sweat and sore shoulders here. 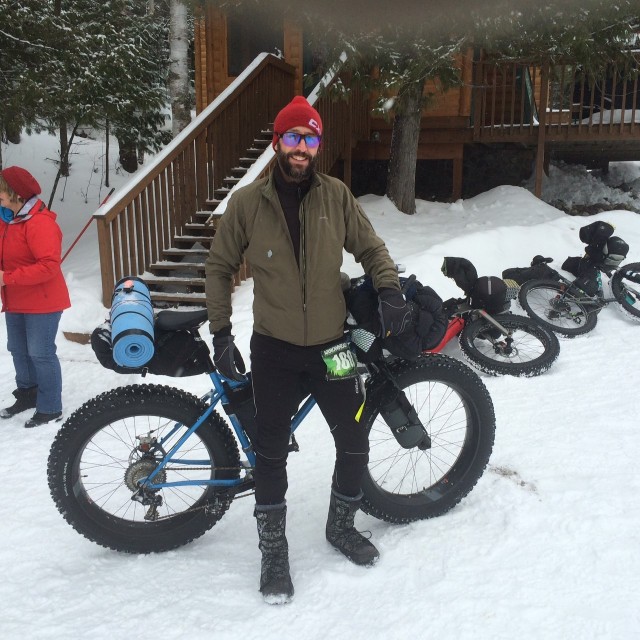 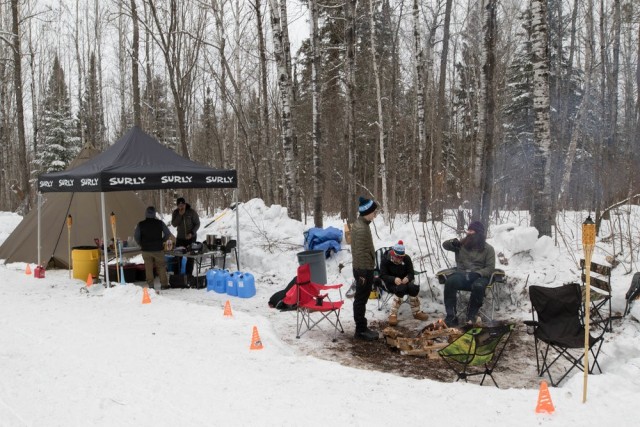 All in all the urban overnight is something anyone in any city can do on a whim provided a pretty minimal gear list, and a "discreet" destination in no campgound is readily avilable. I think sometimes we forget that just because many of us live in a concrete jungle that you don't have to plan a whole week to drop out of society and reconnect with your inner nomad. Some of us at Surly camp this way year round and are always looking for an excuse to explore all the hidden nooks and crannies within the metro area within easy pedaling distance. We also geek out on gear and "bushcraft" like anyone other normal group of well mannered cavemen, so the first part of a Surly overnight often feels like 3rd grade show and tell followed by a cacophony of chopping, carving, honing, stitching and tweaking. We often talk about the inevitable collapse of modern civilization, Third World War or the prospect of a zombie apocalypse; these outings give us the chance to sharpen our skills and preparedness for life after computers and cars. 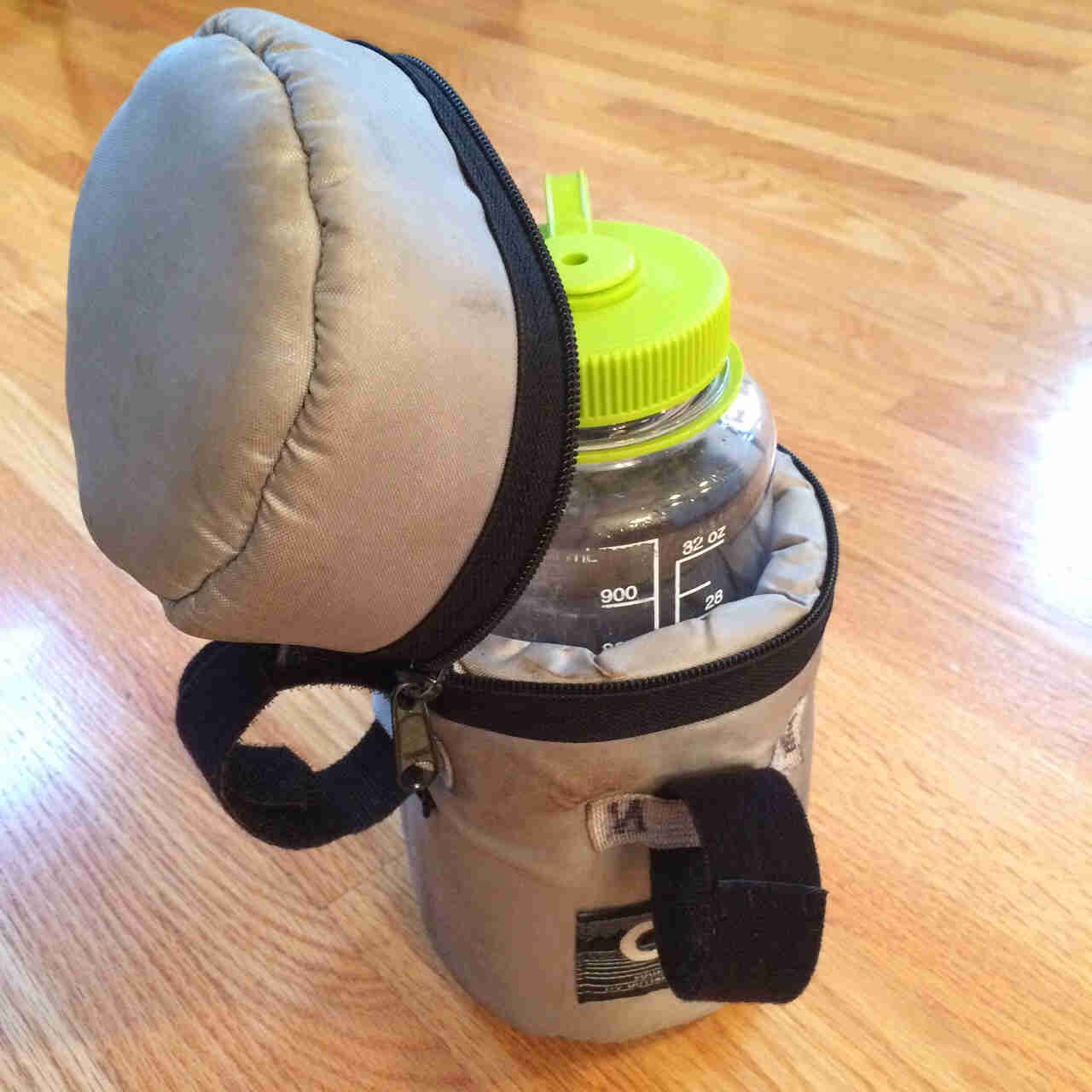 Consider the bridges for hammocking and rain protection, the river bottoms for fires and tenting away from the cycling paths and dog walkers. Perhaps that park on the edge of town where no one seems to hang out after dark save for bats and crickets. Consider the fun to be had in abandoned buildings or overgrown graveyards. The outskirts of farmer's fields, neglected DNR land or "private properties" can all be a home away from home provided no one knows you are/were there and you respectfully leave no trace of your reverie. I'm not encouraging anyone to break the law per say but I'm also not not saying that a lot of laws are pretty dang stupid. Be safe, be smart, be responsible for your actions and above all don't be a dick. Explore your city, town, village or hamlet like it were a vast wilderness, because well, basically it was at one point and one day will be again. 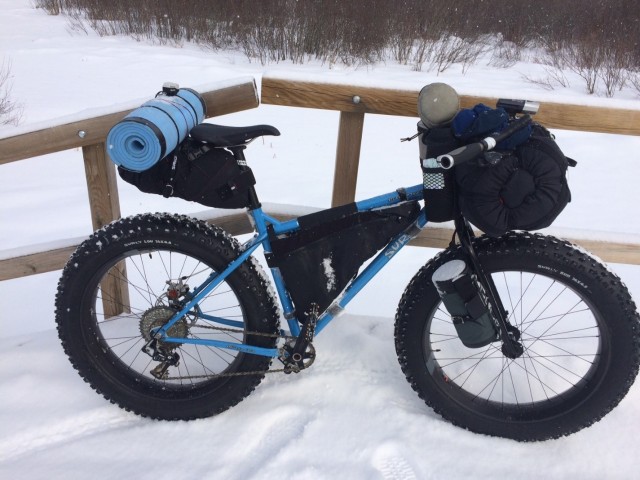 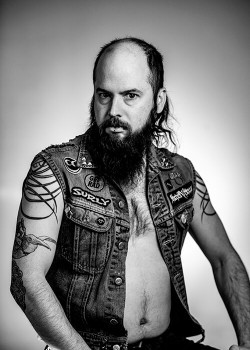