The Lost Trailer, Not Found

So a couple of weeks ago I wrote about my luggage being lost on a trip to Eurobike.  It’s still lost.  I keep talking to the airline and they keep telling me that they’ve found it, or that they’re going to find it. My hopes are not high for that.  There were two things in that piece of luggage that I was really sad about loosing.  One was my favorite hat that I thought I had lost a couple of years ago that I found two weeks before I left for my trip.  Moral: If you find your favorite hat that you thought was lost and then decide to take it to Europe, put it in your carry on.  Even better, wear it (it’s a hat dip-shit).

Free Parable Designs (http://www.freeparable.com/) to give me.  As soon as I saw this thing I new it would be the perfect companion to my Trucker Deluxe.

The trailer breaks down into a pretty small and light package, and comes with a carrying case that will fit the trailer the bag, and other luggage.  The plan was to pack the bike in a soft S&S case and my clothes, some product samples, my business cards and precious hats in the T2 carrying case along with the trailer.  Then once I was at my destination, I would assemble the bike, take the hard plastic sides out of the soft case, put them under the bag on the trailer and throw everything in the bag and off I would go.  Off the plane (or train or whatever) and everything I brought I could ride, or pull behind.  It really is quite an ingenious system.

So after my lost baggage the amazing folks at Free Parable decided to take pity on me (stupid American oaf that I am) and send me a new one.  I just got it yesterday and I thought I would write a quick bit about it.  There were some comments after my last blog that people wanted pictures and were curious how well it works.  The airplane/train long field test will have to wait just a bit longer, but I can still ride this bad-boy around town.

Here is the trailer in its case with its dry bag, my backpack and a box of stuff all zipped up. 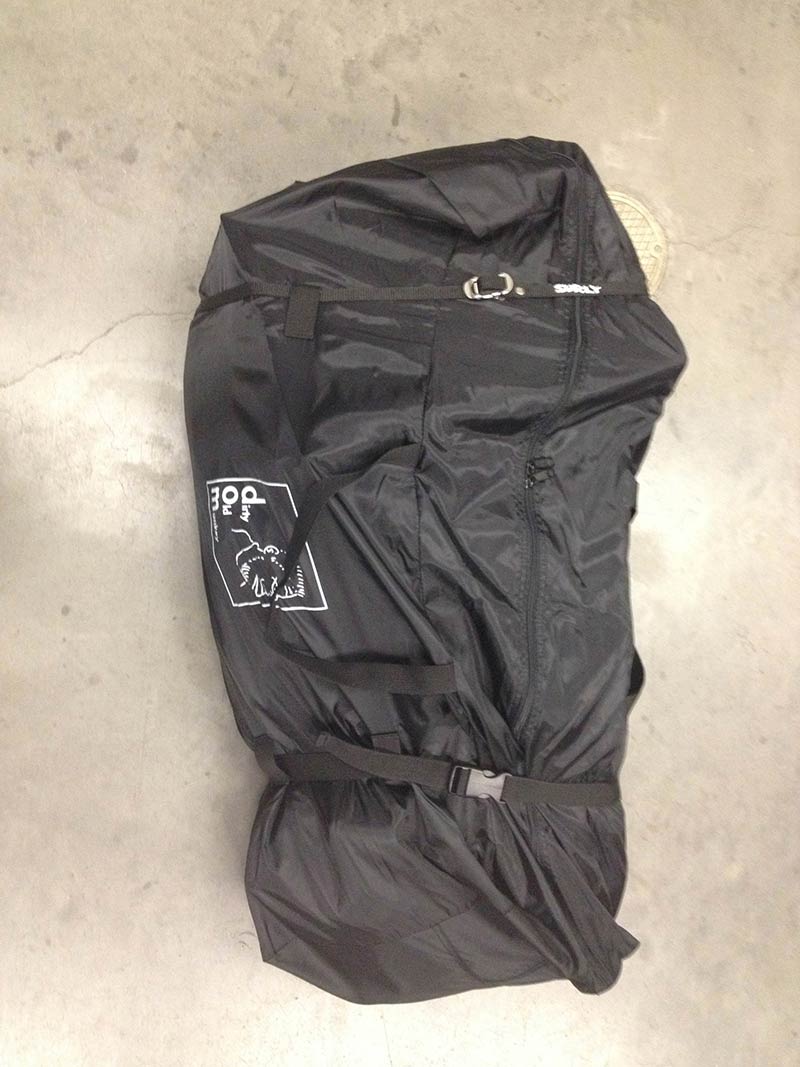 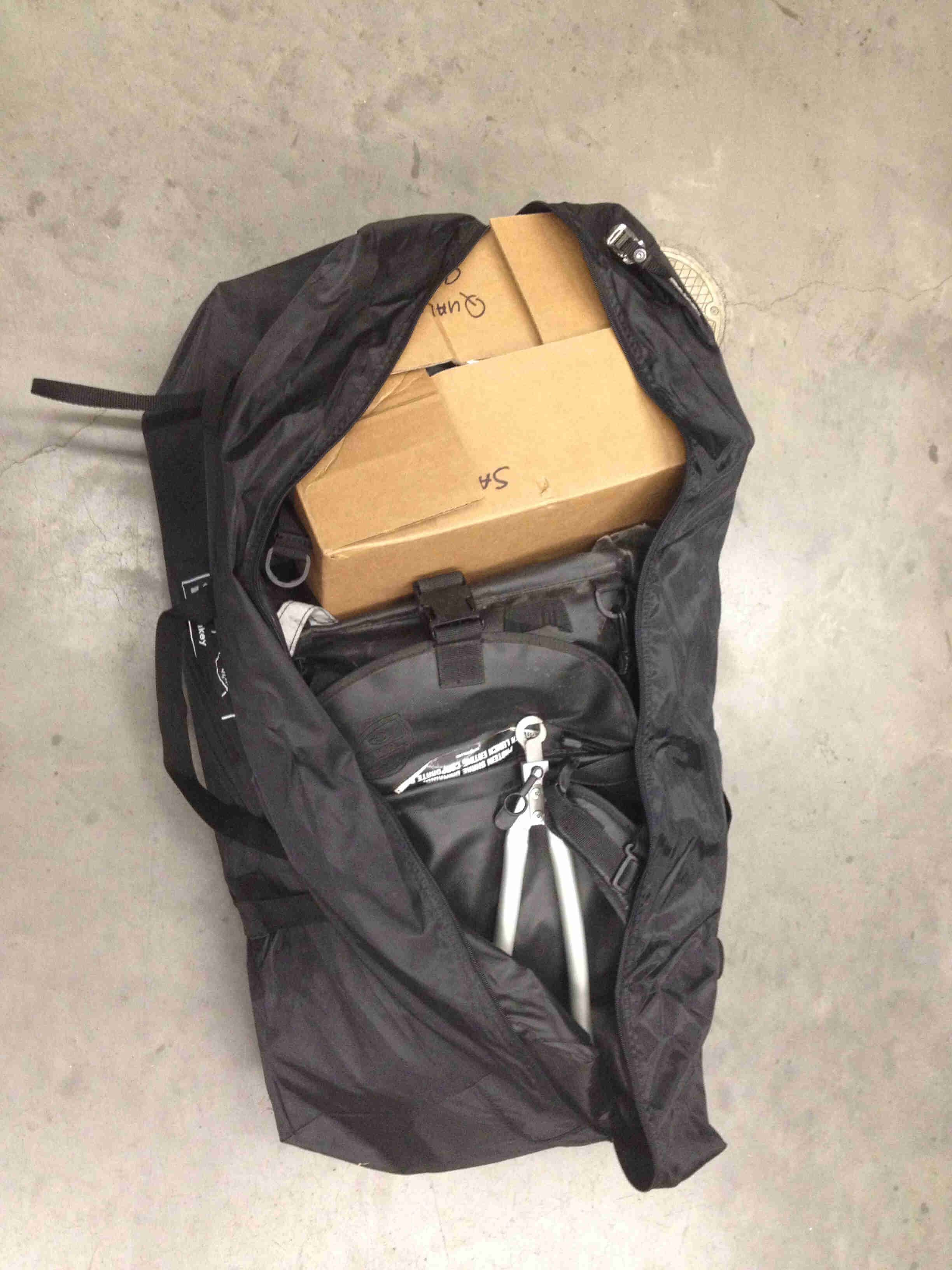 Without the backpack and box and the dry bag on the side (plus my shoe). 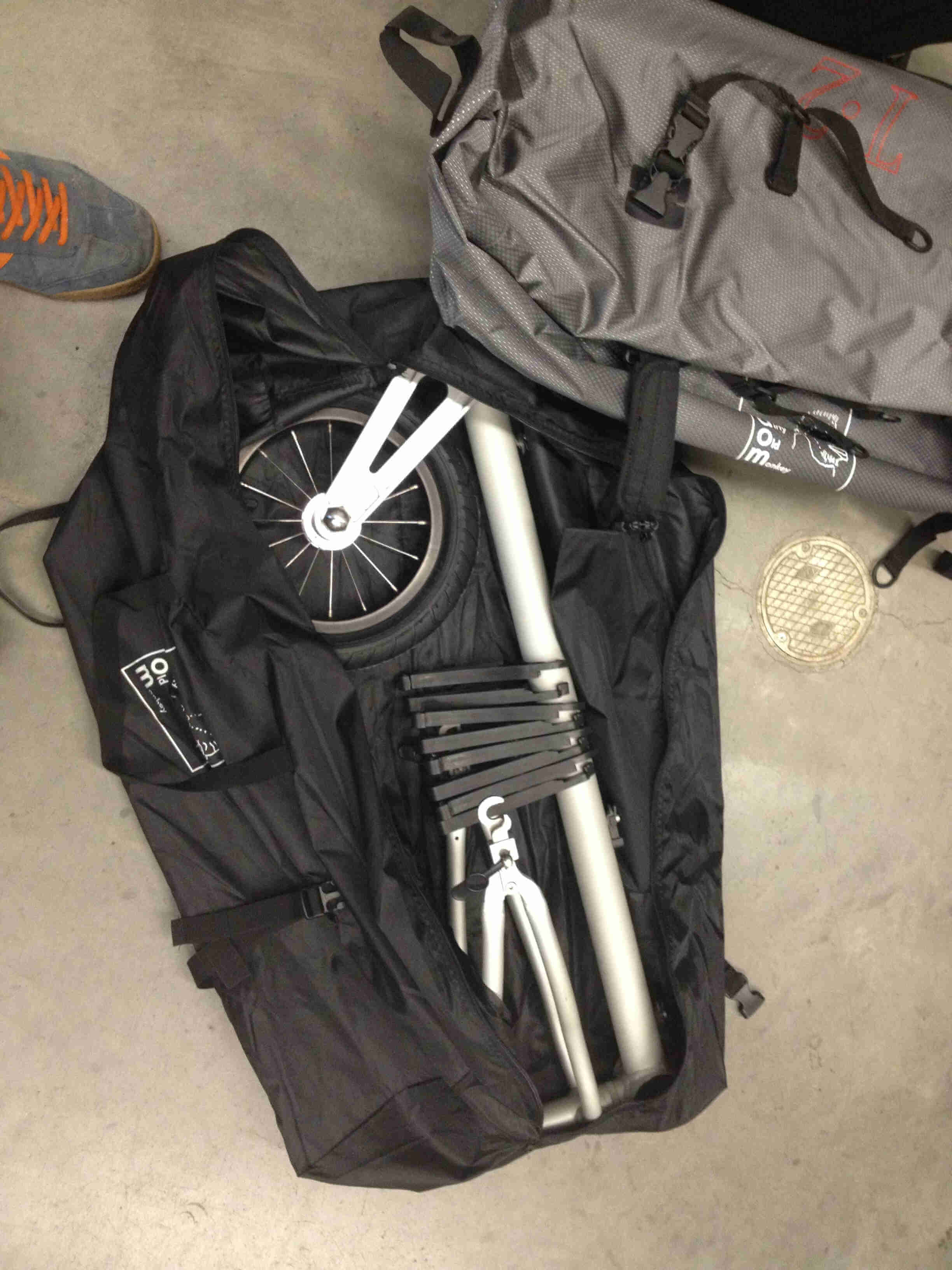 All put together, with my shit in the dry bag. 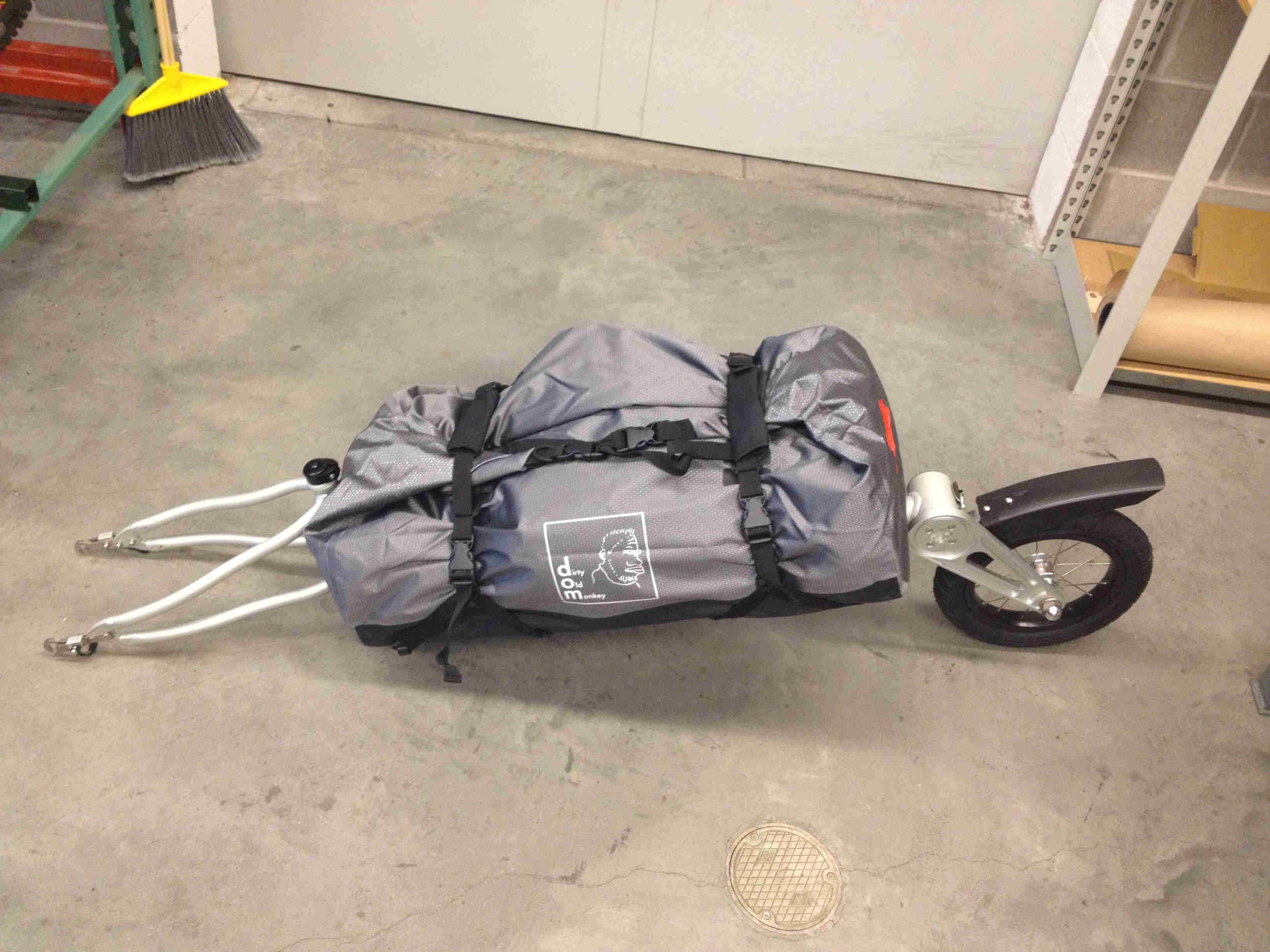 And on the Ogre. 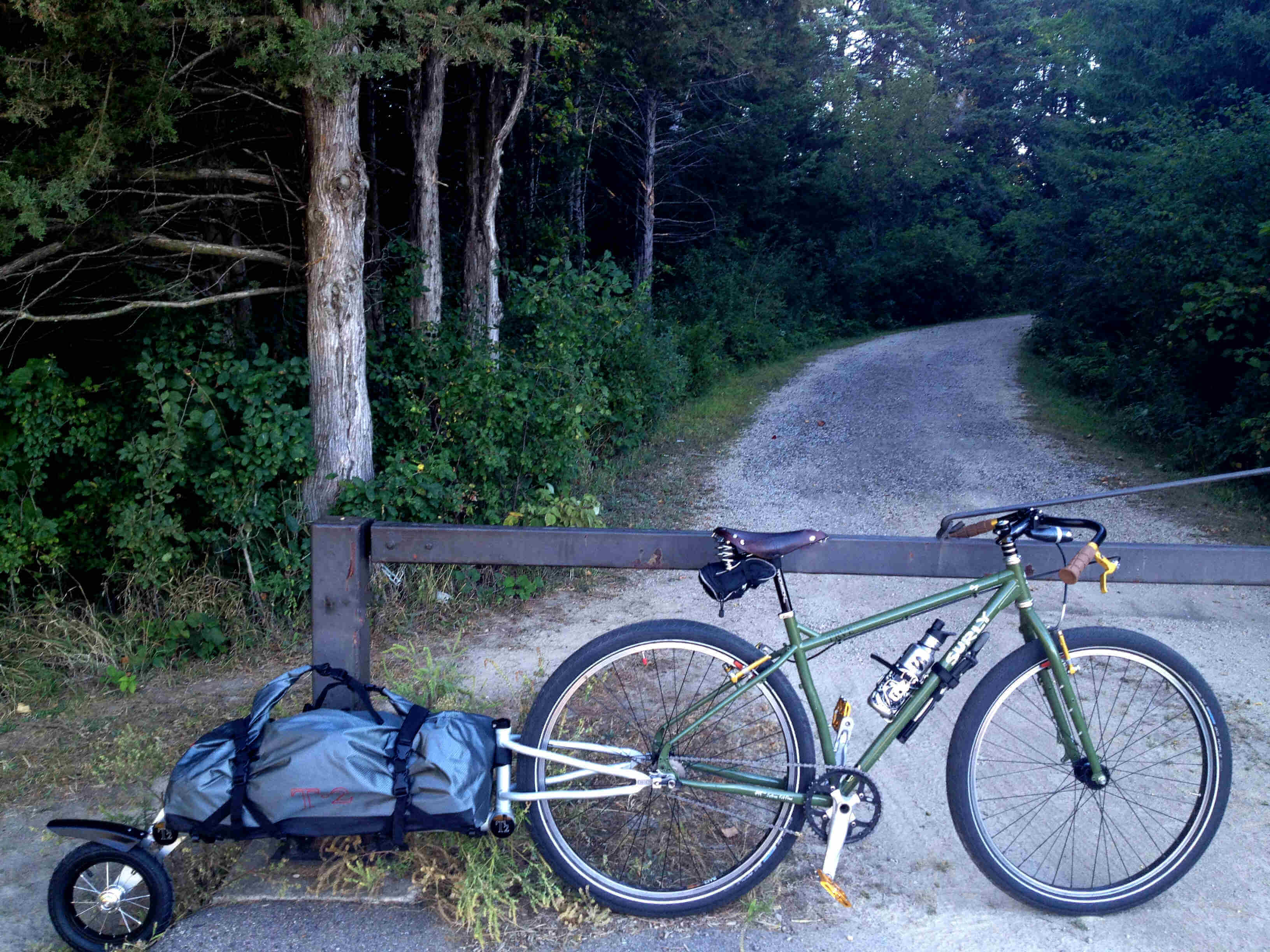 Perfect for the Trucker Deluxe, but that's still in the case from Eurobike. Sort of calling to me to get on the road again. I’ll ride the Ogre (with the trailer in tow) home tonight, and long for my next chance to take it all on the plane, train or bus.

Maybe I’ll take the bus down to see my folks for a weekend soon to test it out.