Make it Your Own: The Dirt to Work Midnight Special

Oh. Hello there. If you're reading this post right now, you probably have some familiarity with Surly bikes, and all the ways crazy people like yourself customize and personalize your Surlys to make them one of a kind and to fit your riding needs. After all, you should be able to create and ride the bike that YOU want, not what the industry tells you to want. That's precisely why we build our bikes to be as versatile as possible. With that said, in order to showcase the endless possibilities of ways to build up our bikes, we are introducing a new recurring segment to our blog, called "Make it Your Own". The idea here is simple - to showcase some awesome, one of a kind Surlys.

If you've got a unique setup yourself, tag @Surlybikes and use hashtag #MakeItYourOwn to your Instagram post, and we might see it and reach out to you. But we can't promise anything. (we're kind of non-commital)

OK, enough of the ramble. The first "Make it Your Own" comes from within the Surly bunker with Surly Brand Ambassador Aaron's dirt to work Midnight Special. Enjoy.

That the Midnight Special is compatible with two different wheel sizes? Yup, that’s right. It’s kind of cool. Like almost all our bikes, the Midnight Special is a versatile steed ready to be custom built just about any way you can imagine it. Or not, that’s the beauty of our versatility. You have choices, see?  The Midnight Special can take up to a 27.5 x 2.35in tire without fenders, or 700 x 42mm without fenders. Both are great, and both have their advantages. Here, I hope to not only speak to the wheel choices available for this bike, but also the beautiful utility of it. 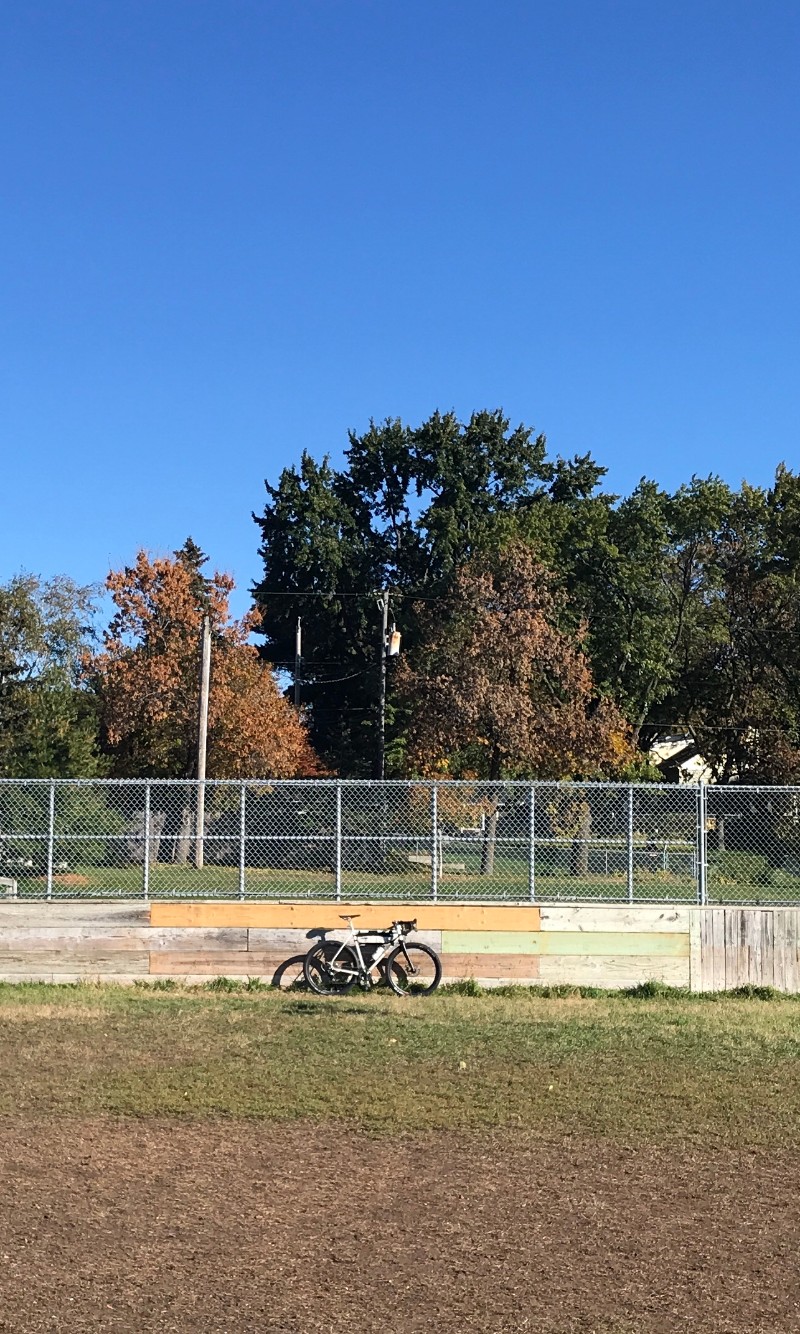 First up, the build-

I built my bike up from parts I had sitting around (drivetrain and bars). For the wheels, I built up a 27.5in wheelset using a Shutter Precision front dynamo hub and Chris King rear hub laced to some Velocity Blunt SS rims. (26.6mm inner width, just right for this set up, and DT Swiss Supercomp spokes to be light and spin up quick). Wired to the dynamo are a Supernova front and rear light set. I’ve been smitten with dynamo lights lately and, if I could afford it, would equip all my bikes with dynamos. (Slowly but surely) 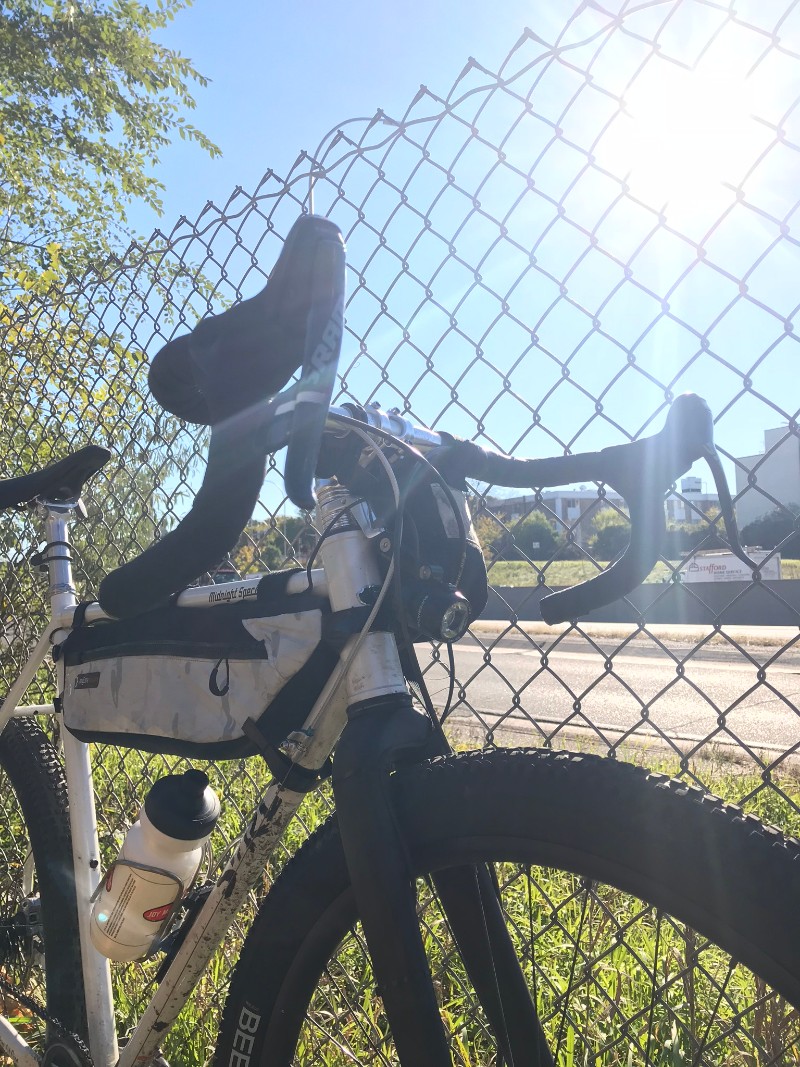 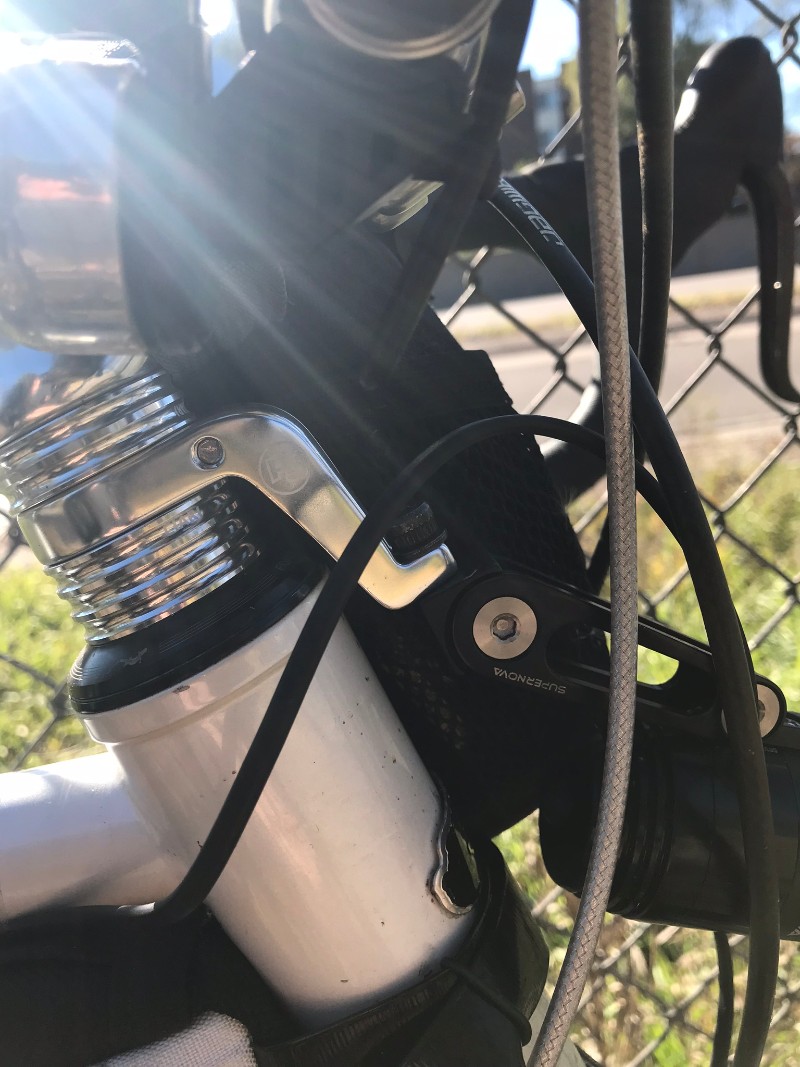 The drivetrain responsibilities were aptly handled by my Force 1 drivetrain I had from an earlier CX bike. Braking was handled by my Avid BB7SL (Stainless for all the salt we put on the roads up here during our gnarly winters). Now for those familiar with this bike, you might be thinking “Hey chuckles, those aren’t Flat Mount brakes, those won’t work! Check mate you Atheist!” I’d agree and say that you are not wrong. These are not the flat mount brakes you are looking for. But, they work perfectly well and they are my component color of choice-shiny silver. So, I thought hey- let’s make them turkeys fly. Remember, this is mostly a parts bin bike and I’m trying to use what I have on hand. If you search, you’ll find a few manufacturers building Flat Mount to Post adapters. I used TRP. Since building this bike, I’ve noticed Shimano is making these adapters as well. Just make sure you ask your LBS for Flat Mount to Post Mount adapters. (Don’t forget the spacing Flat Mount adapters is specific to front or rear, and the adapters can change depending, on rotor size) 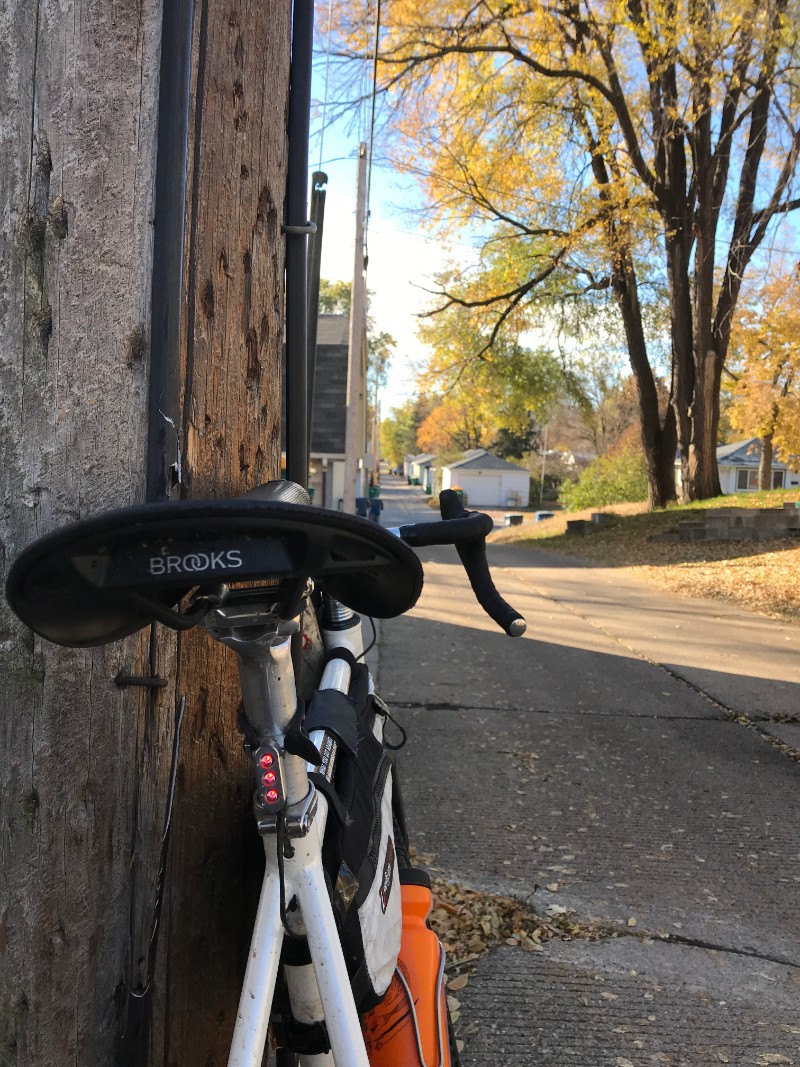 The fork is a Whisky No.9 CX fork with a 15mm axle to accommodate the dynamo. After months of riding, I dig this fork a lot. I’m not your usual carbon type of guy, but before I get to worked up in a tizzy about the old “this type of product over that type of product” argument, I thought I’d get myself a taste to form my own opinion. The fork has handled flawlessly for my less than flawless riding and I have had no complaints about it. The measurements are really close to that of the stock fork (397 A to C, vs 400mm stock and 45mm offset vs 50mm stock offset <on 56cm frame>) And like I said before, it accepts my 15mm thru axle Shutter Precision front hub. 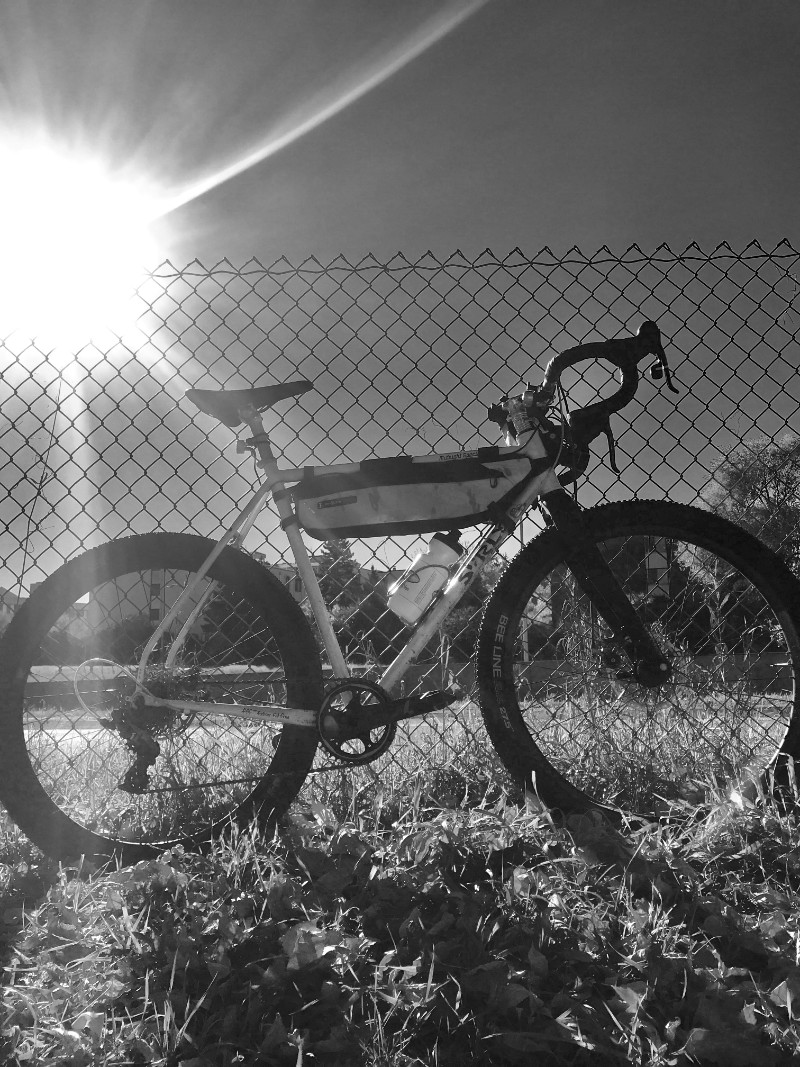 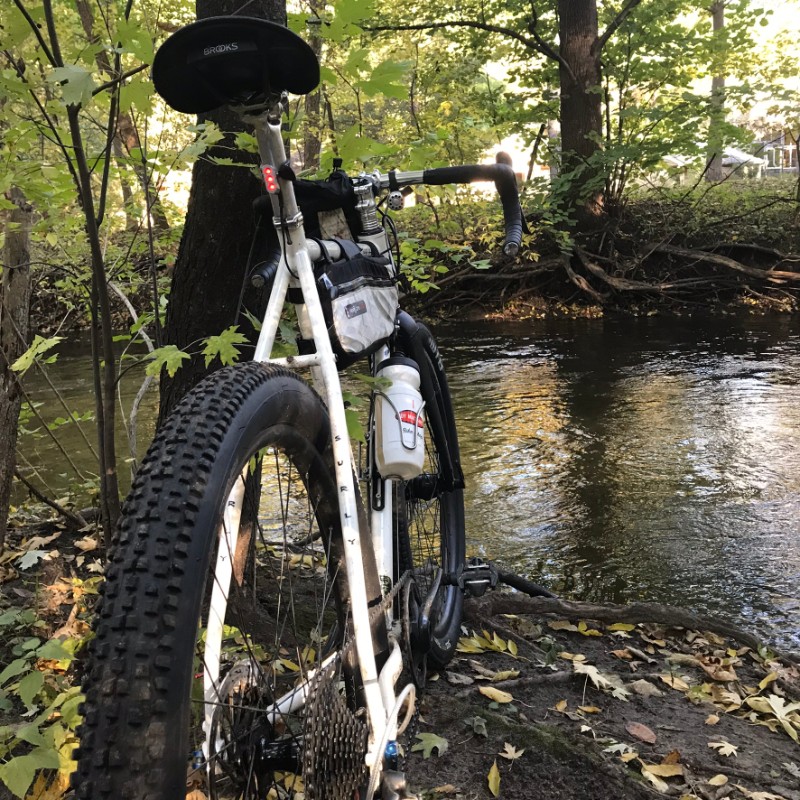 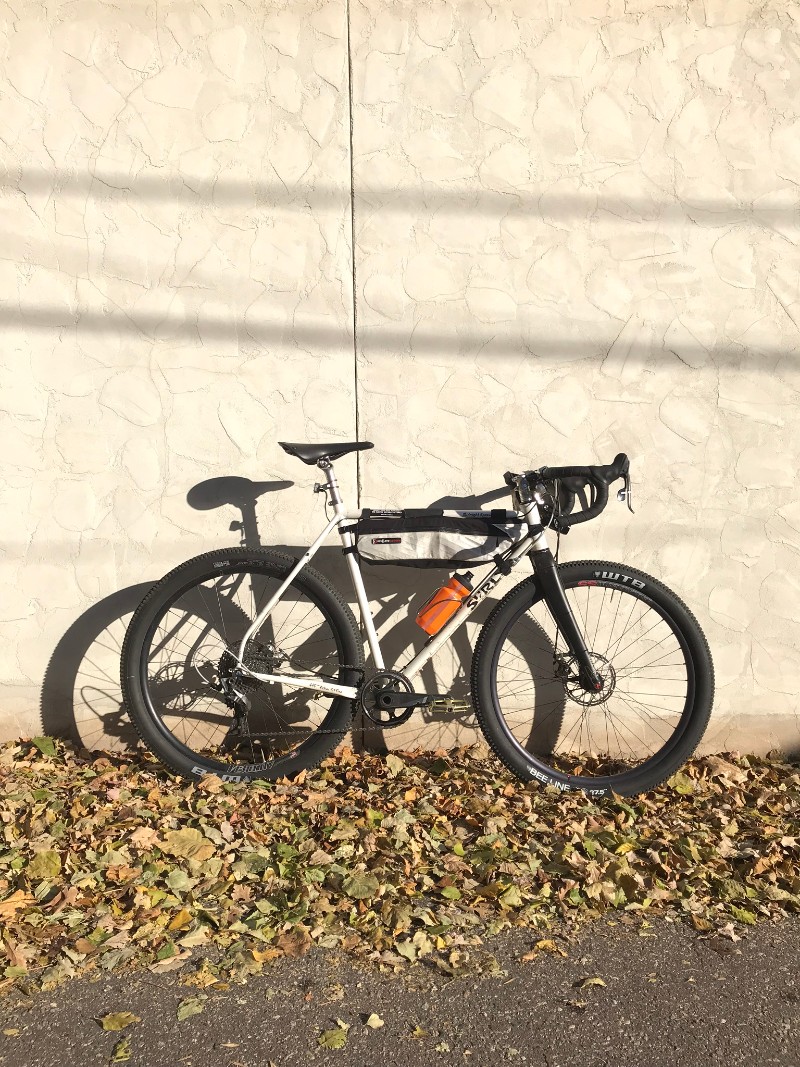 I built my Midnight Special as a fast-paced commuter as a primary use, and trail 4x4 as a second. It handles both swimmingly. I like to think of my Midnight Special as Chuck Norris’ Ram Charger in Walker, Texas Ranger. Daddy’s little ass-kicker. The 1x drivetrain gives me enough gears to get around the city, (hell, Minneapolis is as flat as a pancake) and my decision to switch from my summer tires (Teravail Rampart) to a more dirt-friendly WTB Bee Line setup handles whatever secret dirt I can find on my commutes. (not to mention the snow to come) 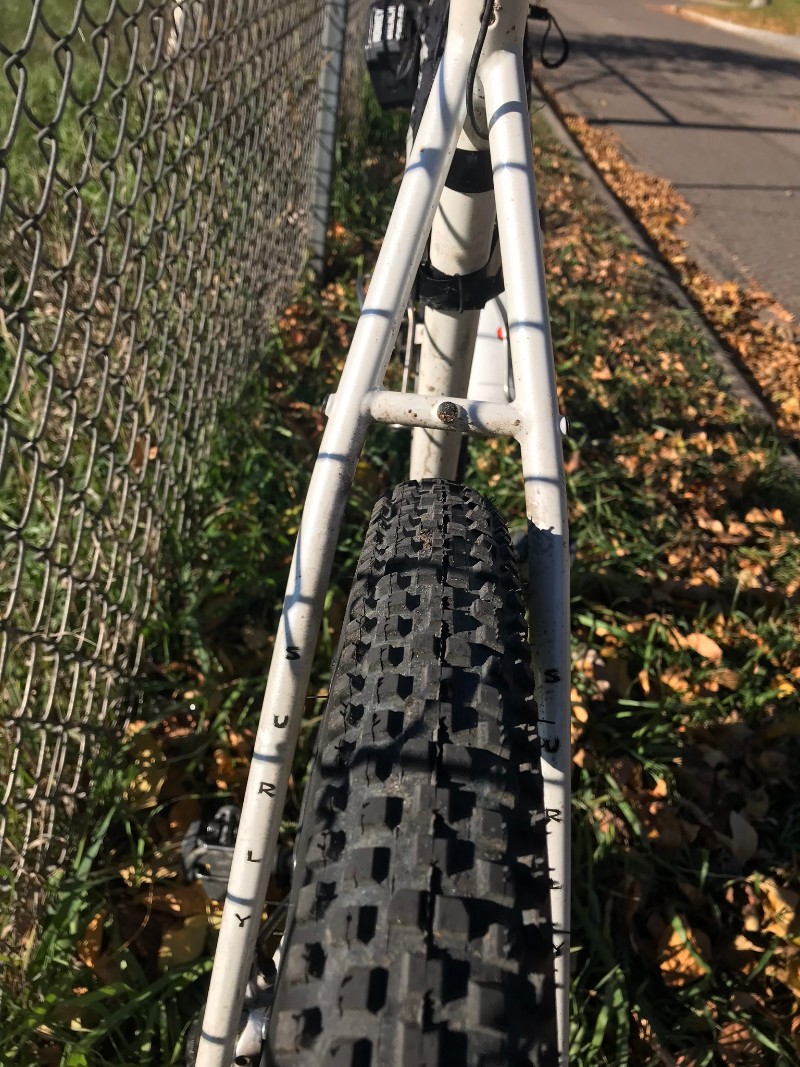 A Dirt to Work Machine.

Which brings me to the title of this blog. Dirt to Work is an ancient practice from the age before fire. Long before it had a name people of all walks of life were forced to walk to work and risk being preyed upon by the angry Pterodactyls. So, they dipped into the woods when threatened. Narrowly avoiding being pecked off by some horrible winged creature. Those were incredibly difficult times. A typical commute would be uphill both ways. And always, always in the snow. So, the people of Earth got together and sacrificed a thousand carbon Tri frames to into a volcano as sacrifice to Crom (truth, I swear). Crom, witnessed this, reared his enormous head and laughed “Silly Humans, you work too damned hard LOL. I shall bestow upon you a gift of such magnanimous power, only one, trve bike company could possibly craft such a tool to behold. A mighty Natch-tubed, steel steed I shall dub, "Midnight Special", and giveth thine to Surly Bikes to craft, and heretofore deliver to the smallest and tallest of people to carry them in their toil, whether that be over the land, paved or path.” 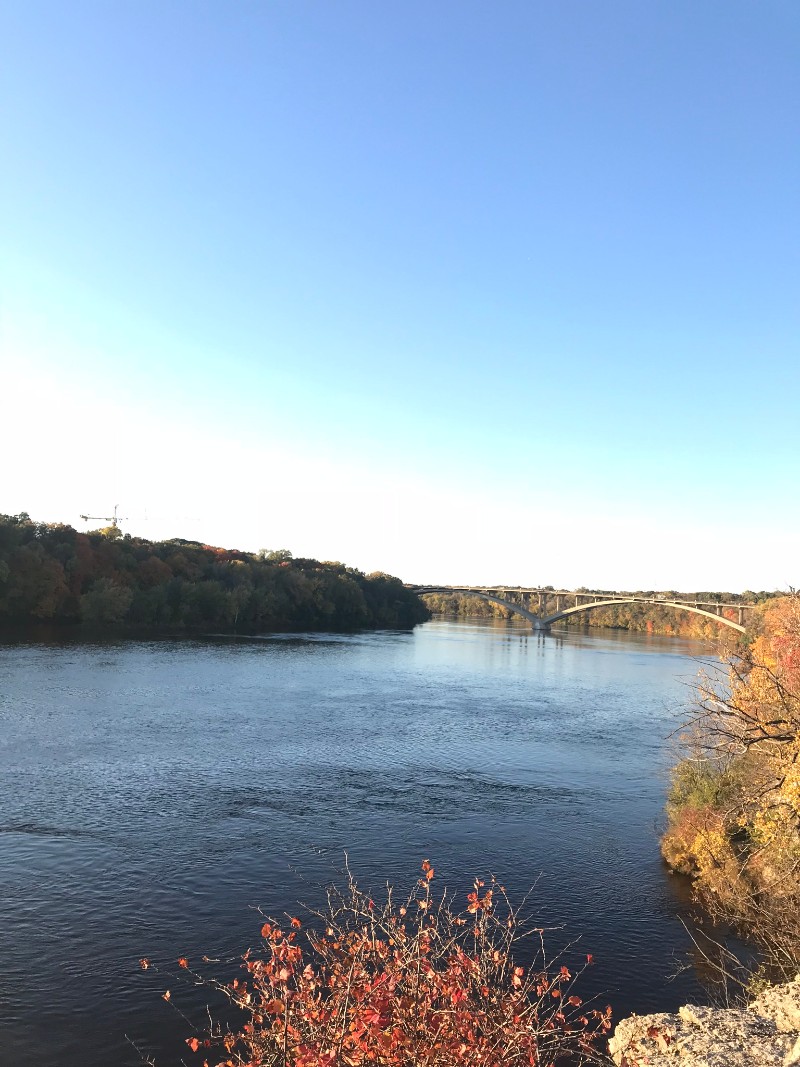 And boom! The Midnight Special sprang forth from a crack in the Earth, delivered in a lightning bolt and a clap of thunder that could be heard through the ages… 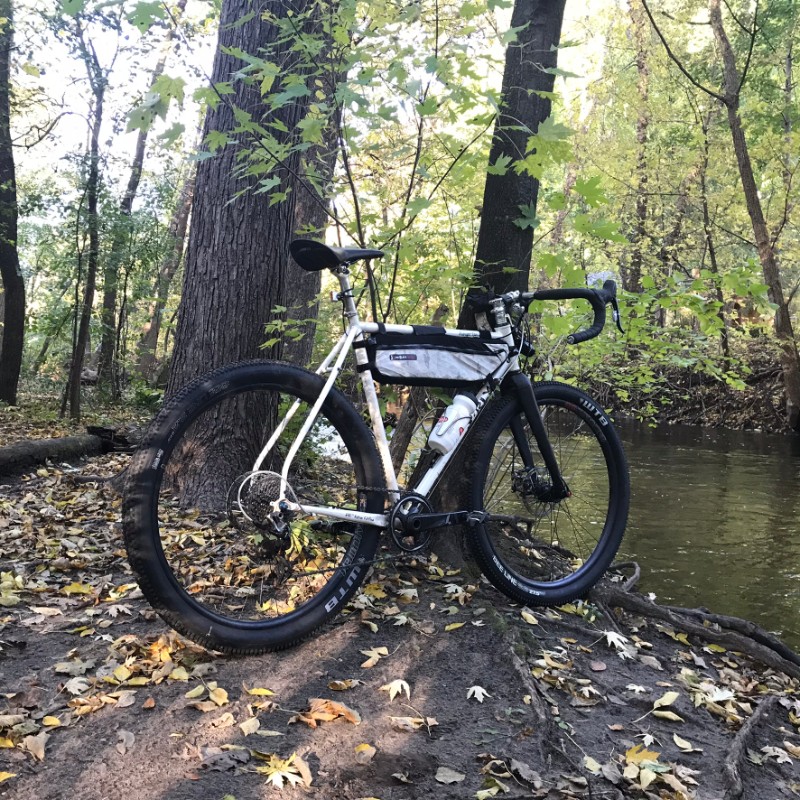 Since its discovery, Dirt to Work has been a way for those of us to partake in the age-old ritual of avoiding horrible flying beasts (Which now have internal combustion engines in place of wings) Side effect of over exposure of Dirt to Work is Dirt Fever. To feed their addiction, some fortuitous commuters flee to the woods to cope with dregs of modern society. Sometimes the dirt desire takes the strongest of wills and never let’s go. A moment away from the hustle of dodging car doors and cagers on cell phones is a worth a lifetime of impermeable bituminous existence. The babble of a stream and chirp of birds reminds us better times, waking up with the sun in our hair, shaking bugs out from once sweaty chamois and shoes before gearing up for a ride with junkie like excitement. 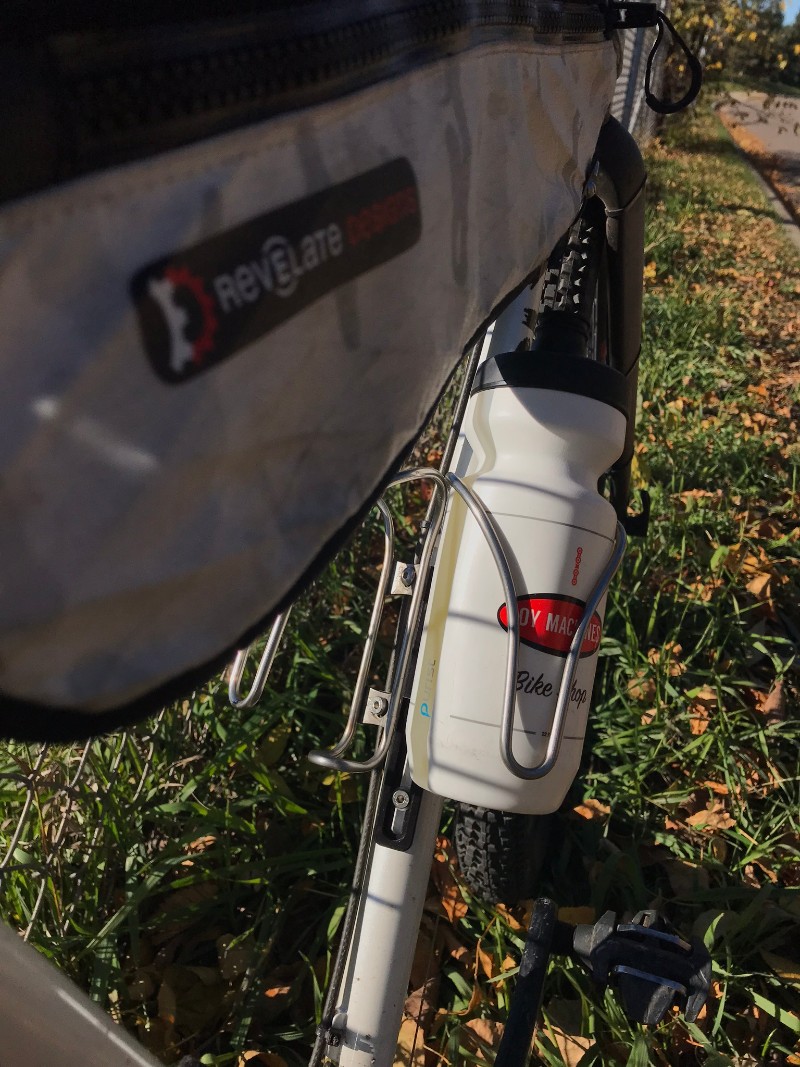 Here in Minneapolis, trail access is dependent upon the weather. And because the weather sucks ass most of the year, trails can close for days on end, and often do. Those of us with the crave must find secret ways to feed the dirt monkey on our back. We could just disregard trail closures and ride around barriers, but let’s face, that’s super fucking weak and a shitty thing to do to our trail builders. So, we look to bootleg single track. It’s everywhere. When I travel to other cities, I have my eyes open, and dirt radar on full swing. I’m always amazed at what I find. Little signatures from local shredders. You can almost feel the local presence on a trail you discover in another city. The late night Thursdirt rides with beers at the overlook. The fun repurposing of nearby debris as trail markers or obstacles.  It’s in the trail.

Whether it be Syracuse NY, Charlotte NC, or Pittsburgh PA, finding that sweet little chunk of dirt wedged in between neighborhoods can turn an otherwise normal commute into a kick ass good time. 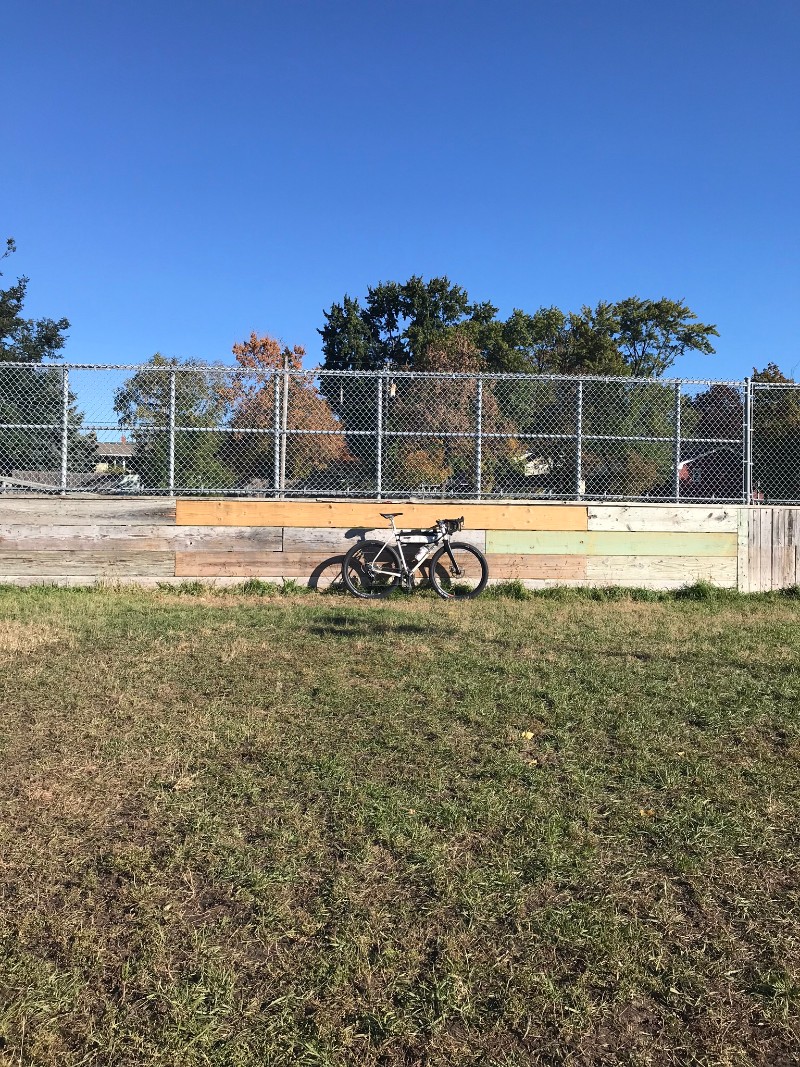 Now, some out there might be reading this and thinking aloud, “Nah, wait a minute right there, Cristopher Brolumbus! Are you saying that we should poach walking/hiking/dog walking/teen drug spots/hobo camps/ and accidentally ‘discovered off limits trails? That’s Unpossible!”

I’m not telling you to do anything my friend, I’m just saying a lot of local trails are multi use, and if you are nice to people and don’t come off as an asshole, you probably won’t have a problem. And if they’re not cool with it, fuck it, let them be the asshole. Just don’t be THAT asshole. Keep riding.

Thing is, a lot of these trails are bootleg trails. That’s the point, THEY DON’T EXIST. (which, by just bringing up the topic, I’m breaking the first rule of fight club: DON’T TALK ABOUT FIGHT CLUB)

So, go forth, take your steed. Feed the Fix. Smash the commute. 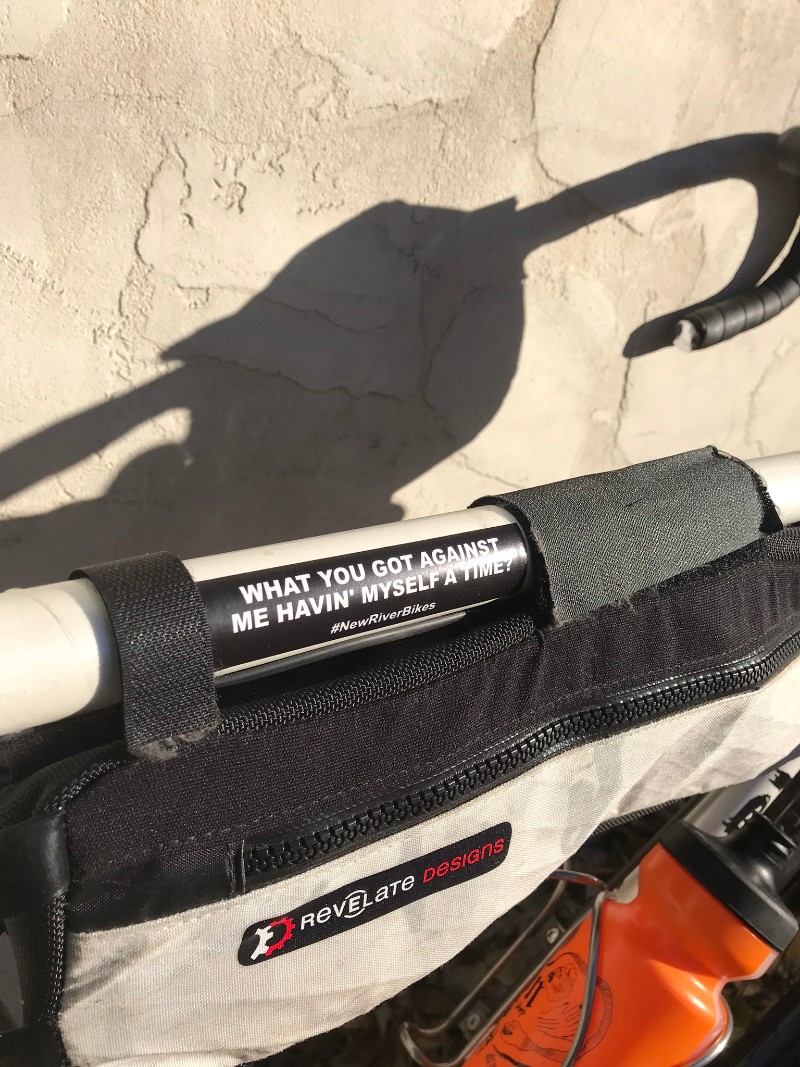