A Couple of Rascals, One Goblin Queen, and the Sierra Nevada

Brethren and sistren, ‘tis me, the arctic-dwelling, pasta-eating, pathetic excuse for a respectable adult, Jack Mac. 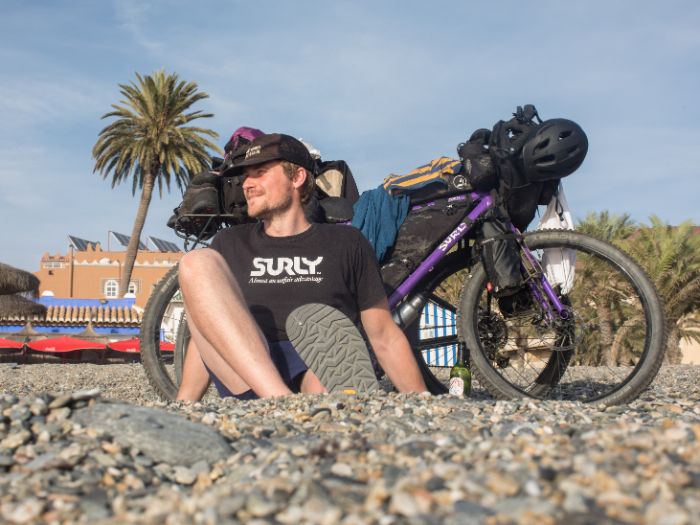 It’s safe to say that the past year was one of the very best and most challenging I’ve had. I made a semi-permanent relocation in my home-on-wheels to the Arctic Circle, took on a bunch of totally crazy Norwegian clients, and found... wait for it... love. Yep. I got me a ball and chain and she goes by Amber.

How I managed to find anyone accepting of my deep LOTR fetishism and other eccentricities is a great question, but it turns out Amber is up for any challenge. She fits in the van’s second bedroom (the rear cupboard alongside the bed), she accepts me as is, and crucially... the DEAL BREAKER... she rides a Surly. Like mine, it’s a Karate Monkey, but she calls hers Karate Kitten. 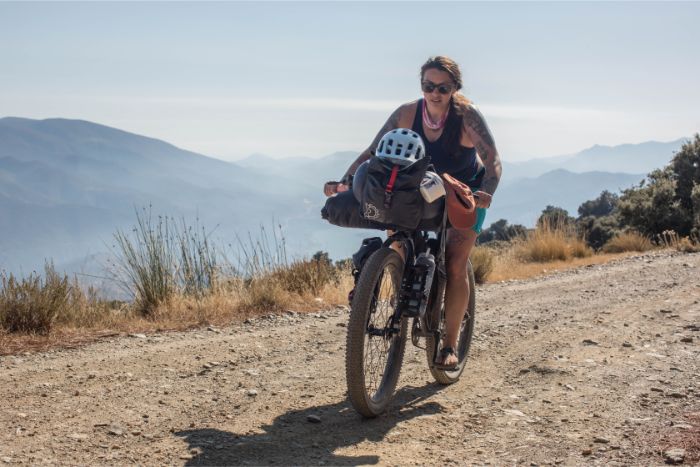 But we’re here to talk about riding, so let’s get on with it: Riding in Lofoten Norway is a pile of garbage. The end.

Jokes aside, Norway is a beautiful place to ride and you can read all about it in my previous article for the Surly blog. But here in Lofoten, trails are slim pickings — particularly in the south. In the winter the roads are sheet ice. In the summer, tourism means you’re just one corner away from being clocked by one of a bazillion motorhomes. There are more trails as you head north toward Narvik, fortunately, but with a hectic work schedule, I was limited to dodging traffic.

Feeling the need to get away, I called up my bikepacking amigos Bart and Michalina and asked if they’d join the Karate Kitten and me for a ride. 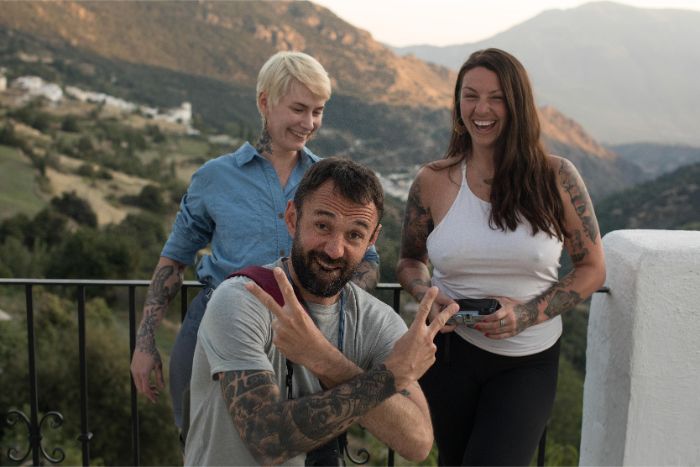 Determining the location came first. Bodo, my nearest airport, flies direct to just about nowhere, but in the end, we settled on flying to Spain to tackle the infamous Sierra Nevada, which I have since learned doesn’t mean “pleasant meandering hills.”

We arrived in Malaga seamlessly, but the journey took me about two days, and the arrival of Amber’s Karate Kitten was delayed. Moreover, it was 35 bloody degrees (Celsius) on the day we landed. October usually averages between 15 and 20 there, so this was some relentless heat. At high altitude and without shade, it was often unbearable.

Bikepacking the Sierra Nevada in Spain

Our route was devised by Bart, and in hindsight, we did make some errors on this trip — arguably the biggest was underestimating the scenic route we chose from Malaga into the Sierra Nevada. The result was two days of 1,500-2,000m climbs on 30%+ gradients in unbearable heat. Now, this had a pretty profound effect on all of us (except Bart who’s super-human). Despite its beauty, our route featured many truly savage climbs that I feel are best avoided. It’s not that I ever want the easy route per se (and I certainly don’t regret our experiences), it was just a shame to miss some of the national parks due to our slow progress in getting there.

Though I’ve been to Spain a few times, I’d never experienced ruggedness in Spain like the Sierra Nevada. With plentiful gravel roads and a good selection of single track, it’s a bikepacker’s dream. The highest mountain may only come in at 3,479m, but it’s one of many peaks this size that is actually reasonably accessible by bike. The climbs are frequent and often brutal, but you’re rewarded with jaw-dropping views of beautiful mountain villages that offer great food (and coffee) at very reasonable prices (our personal favorite being Capileira). 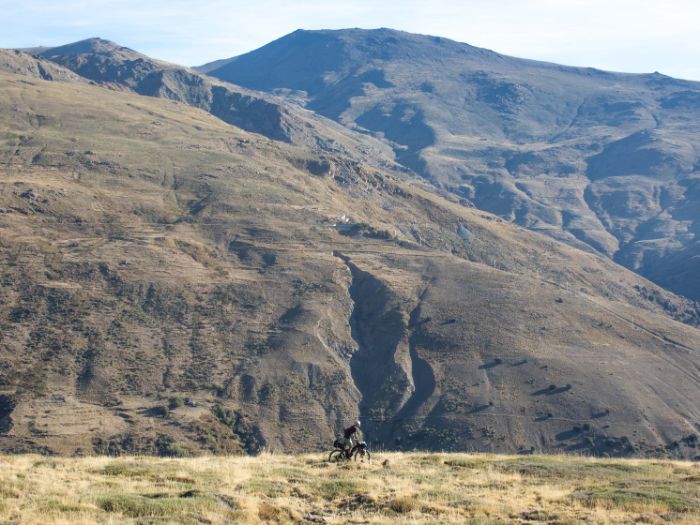 The food in Spain is famously delicious — often simple with the quality of ingredients being the real showpiece. We were keen to be as environmentally conscious on this ride as possible; with little to no plastic and with numerous greengrocers, it was easy to stock up our bike bags with some of the finest fruits and vegetables I’ve ever tasted. Inspired by bikepacking heroes like Cass Gilbert (“While Out Riding”), I focused on foods that are both high-calorie and packed with vitamins, rather than the easy-grab chocolate and biscuits with poor nutritional value and plastic packaging. I can honestly say this approach benefitted me hugely, as I had more energy and remained injury-free despite incessant climbing. 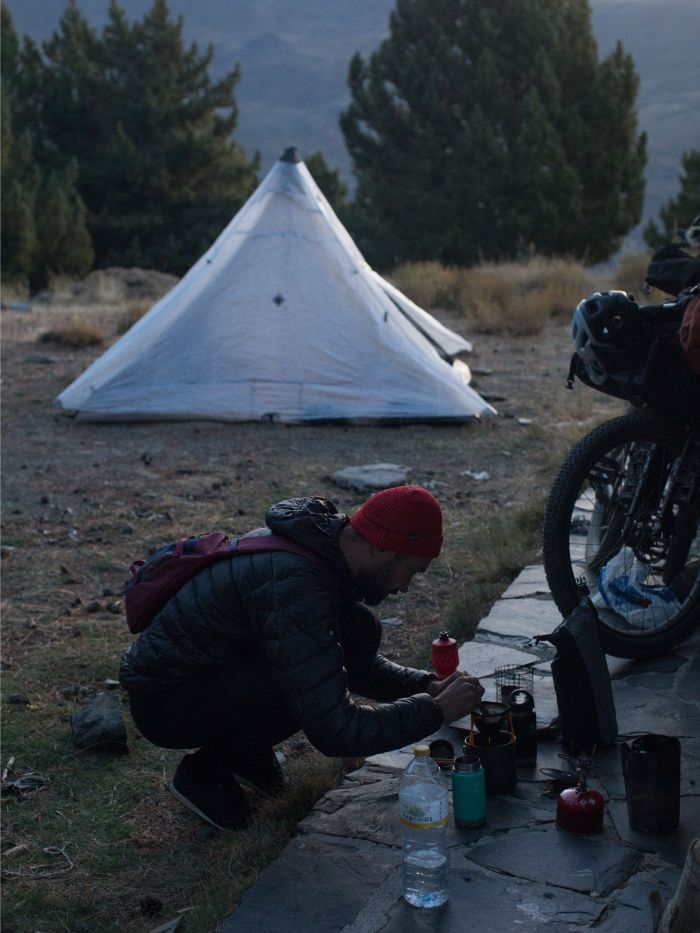 Our main goal was climbing to the top of Mulhacen (the highest mountain) on the bikes before spending the night at a remote mountain and returning via a route that looped around the Sierra Nevada. Unfortunately, Amber had an allergic reaction to some food that contained a rare type of shellfish, which was pretty scary at 3000+ meters. In the end Amber was really struggling to breathe and swelling up pretty bad, so we parted ways with Bart and Michalina so they could summit while we descended approximately 1500m back to the village we’d stayed at the night before. Amber was extremely frustrated knowing there were just 500 meters between us and the peak of Mulhacen, especially after a truly grueling 3,000-meter climb the day before.

But despite her protests, turning back was the sensible choice. It’s important to remember that in remote regions if things were to suddenly turn serious, it could be very difficult for emergency services to reach you. I’m often teased for being Mr. Boring & Sensible, but I also spend a LOT of time in the mountains (it’s my profession, after all) so I’ve seen how quickly a situation can escalate. With these things in mind, we formulated a more forgiving route that accounted for Amber’s condition — she was OK but completely wiped from the previous day’s events. 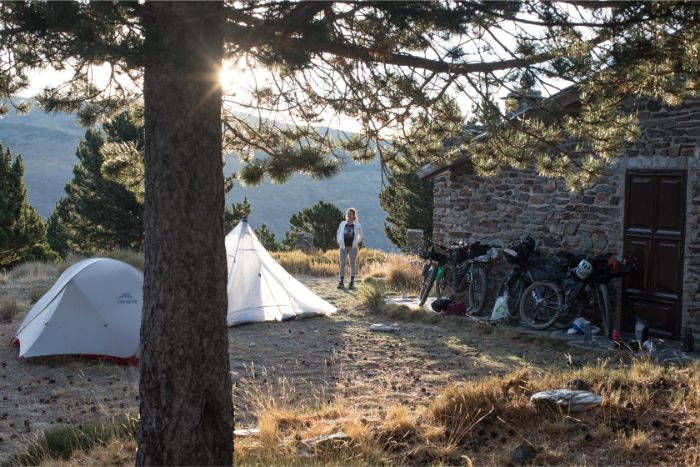 Now, one of the reasons I love riding with Bart & Michelina is that nothing’s a disaster. We embrace the unforeseen and work as a team to recalibrate. Bikepacking is about the adventure and while goals are great, it’s also important to remain flexible and open to change. It can be very disheartening when you don’t reach your destination until you realize that the real reward is in the journey itself. So, the next day when we said our goodbyes, we were saddened to part ways, but also excited for a day that promised back-to-back mountain descents... and it didn’t disappoint. We finished our journey in a tiny Spanish town where one of Michelina’s friends gave us a lift into Malaga.

On this trip, Amber and I both rode custom-built Surly Karate Monkeys, and we couldn’t have been more impressed by their performance. My Monkey had been carefully put together as a project with my local bike shop (and good friends) — Herbert’s Cycles in Whitstable. (Visit www.jack-mac.com for details on the build.)

As always we supported small bikepacking companies for our bags wherever possible, with an assortment of gear manufactured by JPaks, Surly Bikes, Car Sick Designs, Revelate Designs, Carradice bags and Salsa.

I was extremely happy with my Karate Monkey; the countless hours of planning and test riding meant it rode beautifully. After numerous bikepacking adventures, my bag setup performed flawlessly. As usual, I packed way too much photography/videography gear, so this will be cut dramatically in the future. Namely, I’d like to transition to a full mirrorless system that’s adequate for both photography/videography. I’d also be interested in experimenting with a simple rear rack/saddlebag and front rack/basket/basket bag combo in the future. I really like keeping all my gear super-easily accessible, especially as I focus more on carrying fresh produce on rides. As such, I have my eye on the new Car Sick Designs 1 Three 7 basket bag to fit neatly between the drop bars of my KM. 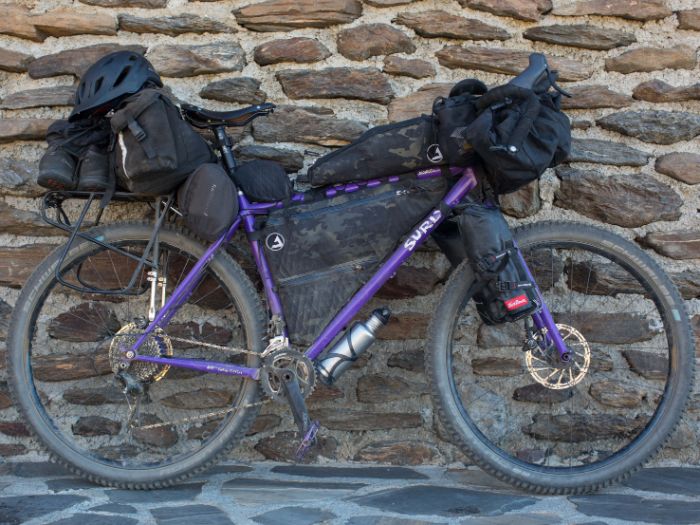 Amber’s bike was assembled super-fast and was ridden only a couple of times before being packed for Spain. She utilized Revelate Design products almost exclusively and was very happy with the overall performance. We both agreed that a rear rack and saddlebag are just more practical than a harness for our personal needs. 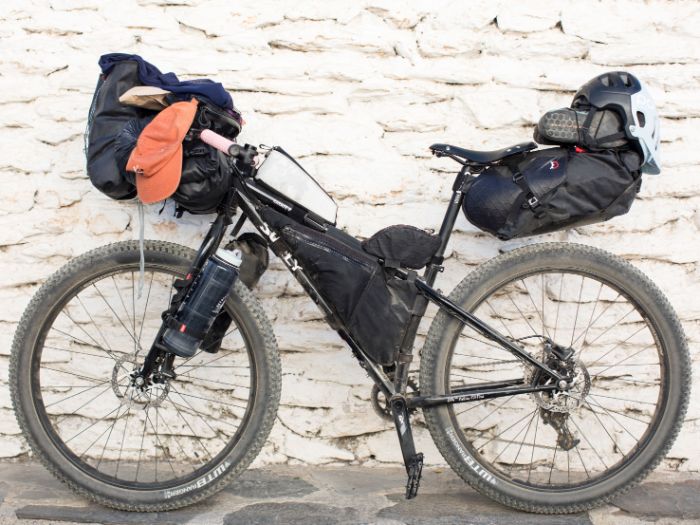 I’ve owned Surlys now for almost a decade and if there’s one consistent factor it’s the f**king smile on my face. I love Surly Bikes, I’m a shameless fanboy, and riding for a company I truly support is a dream come true. Now, if shredding gravel roads through the mountains at over 40 miles per hour on a bright purple custom-built drop-bar Karate Monkey doesn’t put a smile on your face then... I dunno. But it’s concerning and will require careful observation.

I’m currently back in the U.K. and finishing the first stage in a complete rebuild of my home-on-wheels, a 1986 VW T3 Syncro. We will be back on the bikes once the world returns to some kind of normalcy. Stay safe and see you soon!

If you want to keep up to date with my adventures, check out my site www.jack-mac.com or find me on Instagram: @Bicycle_Touring_Apocalypse.